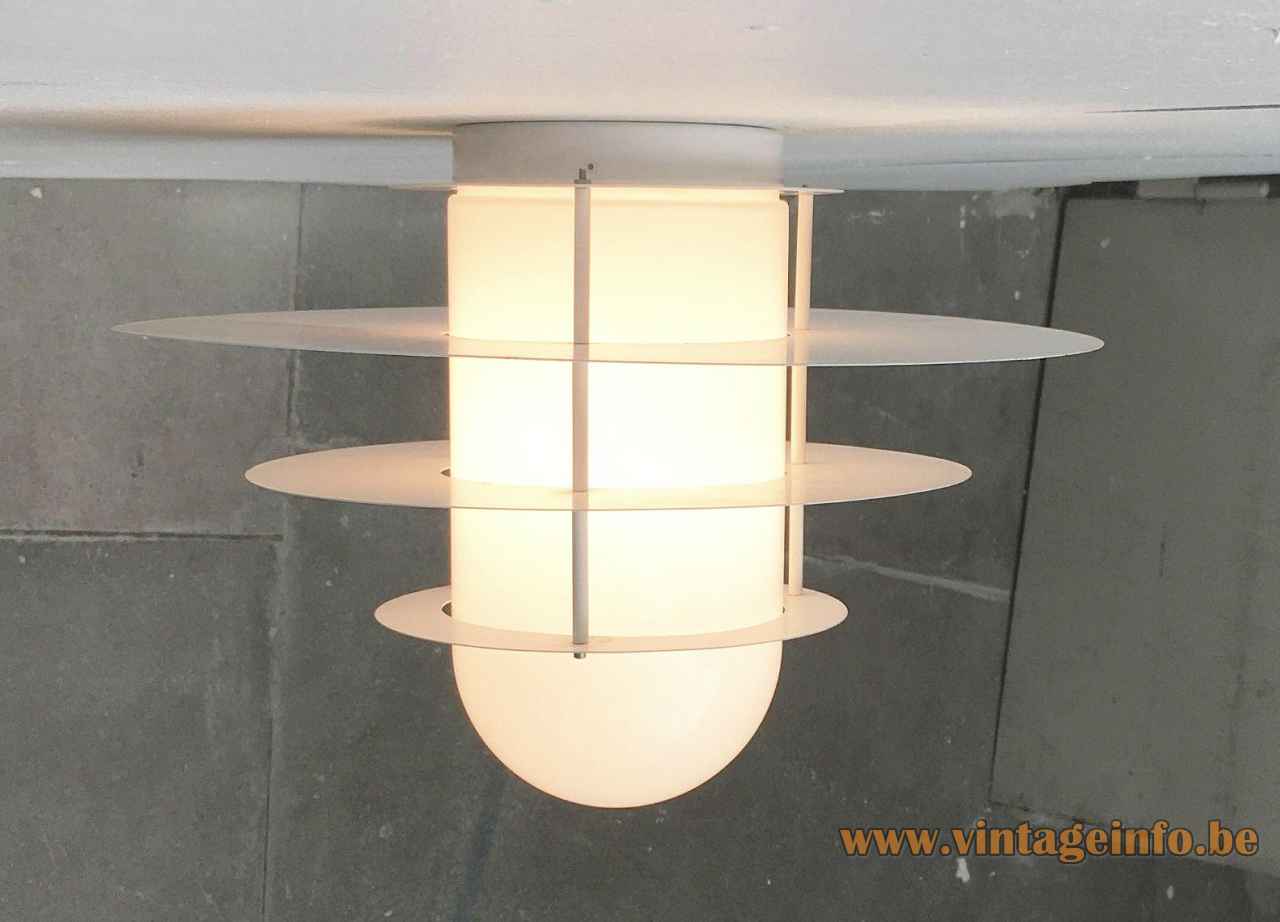 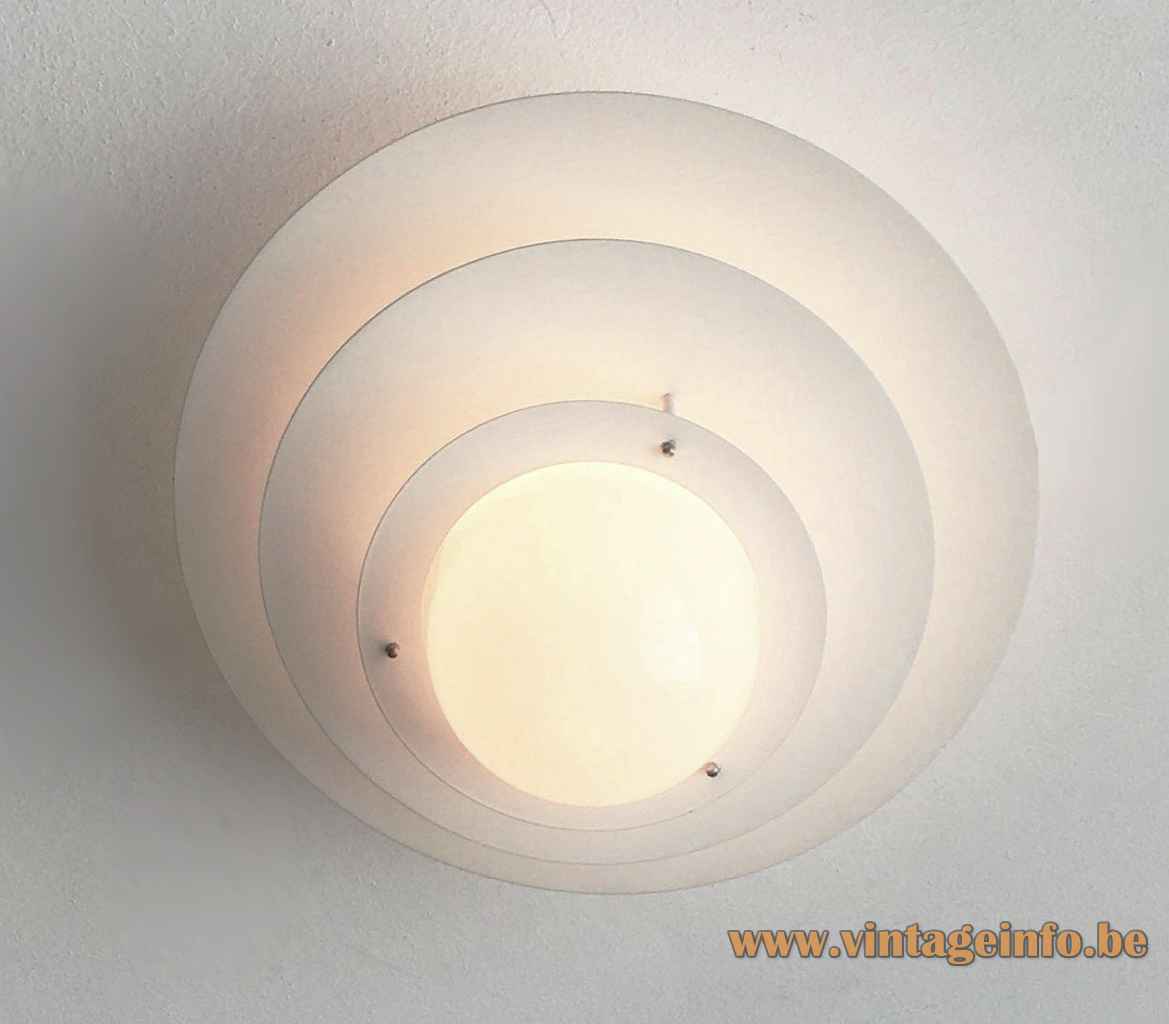 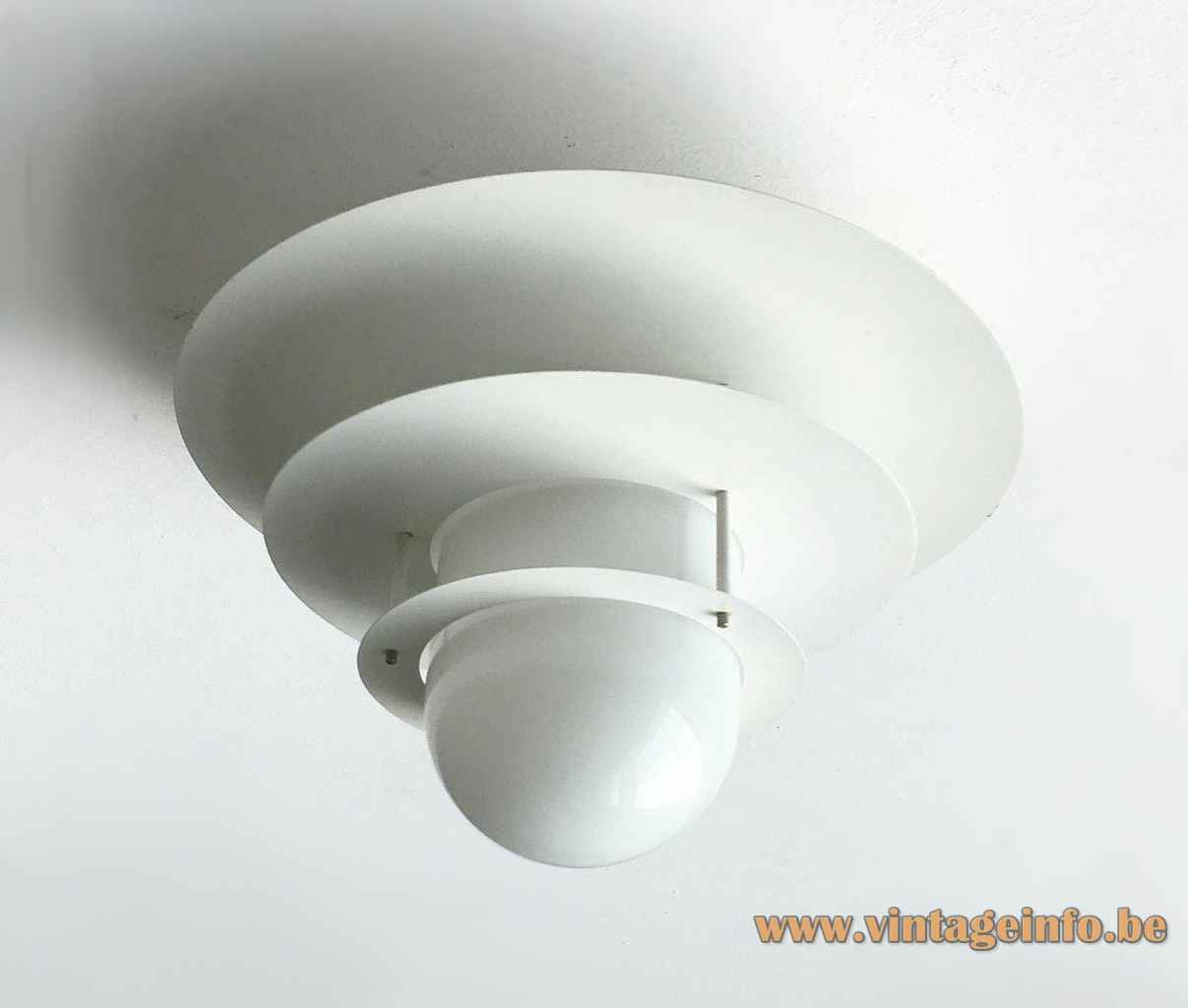 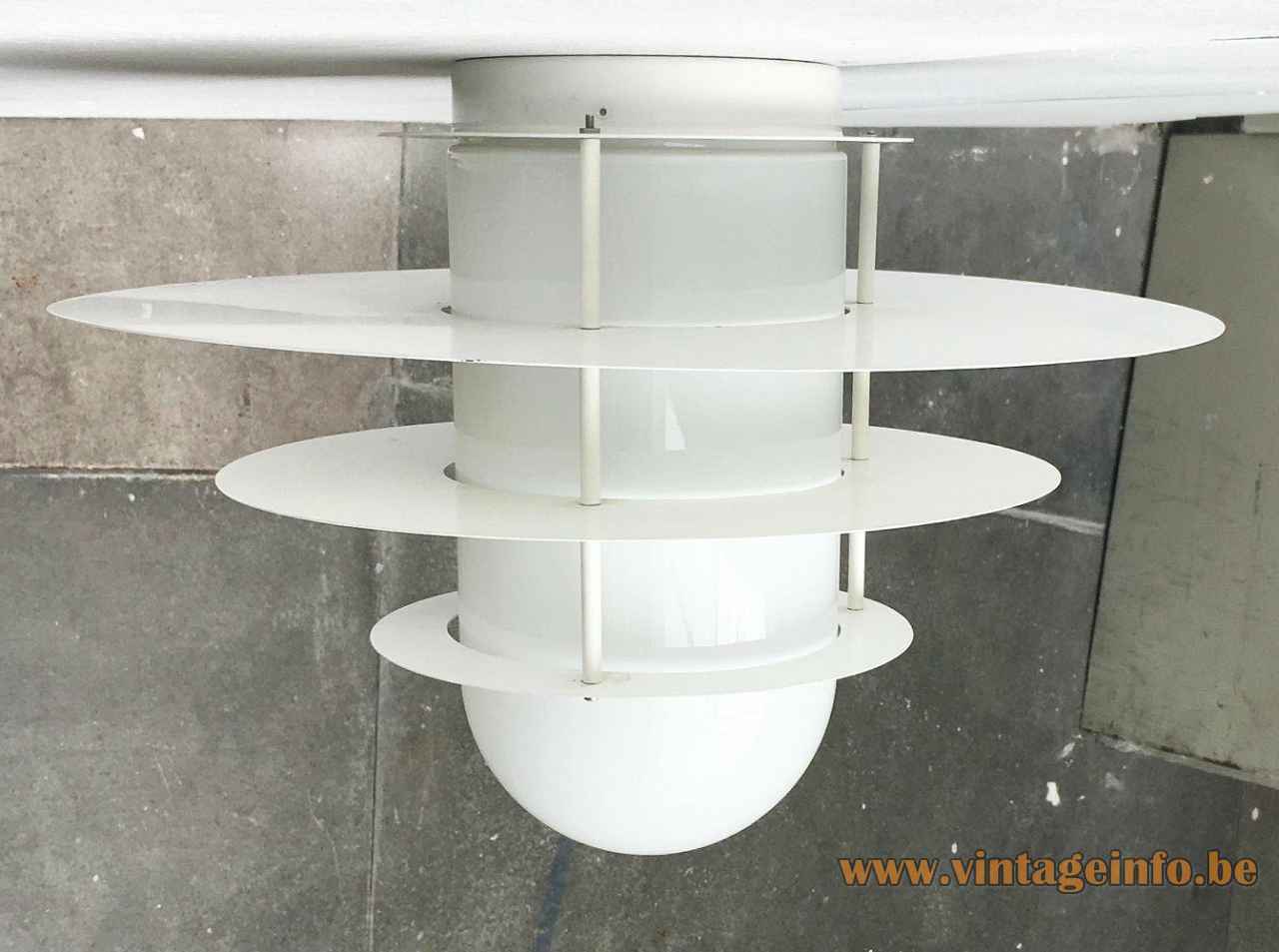 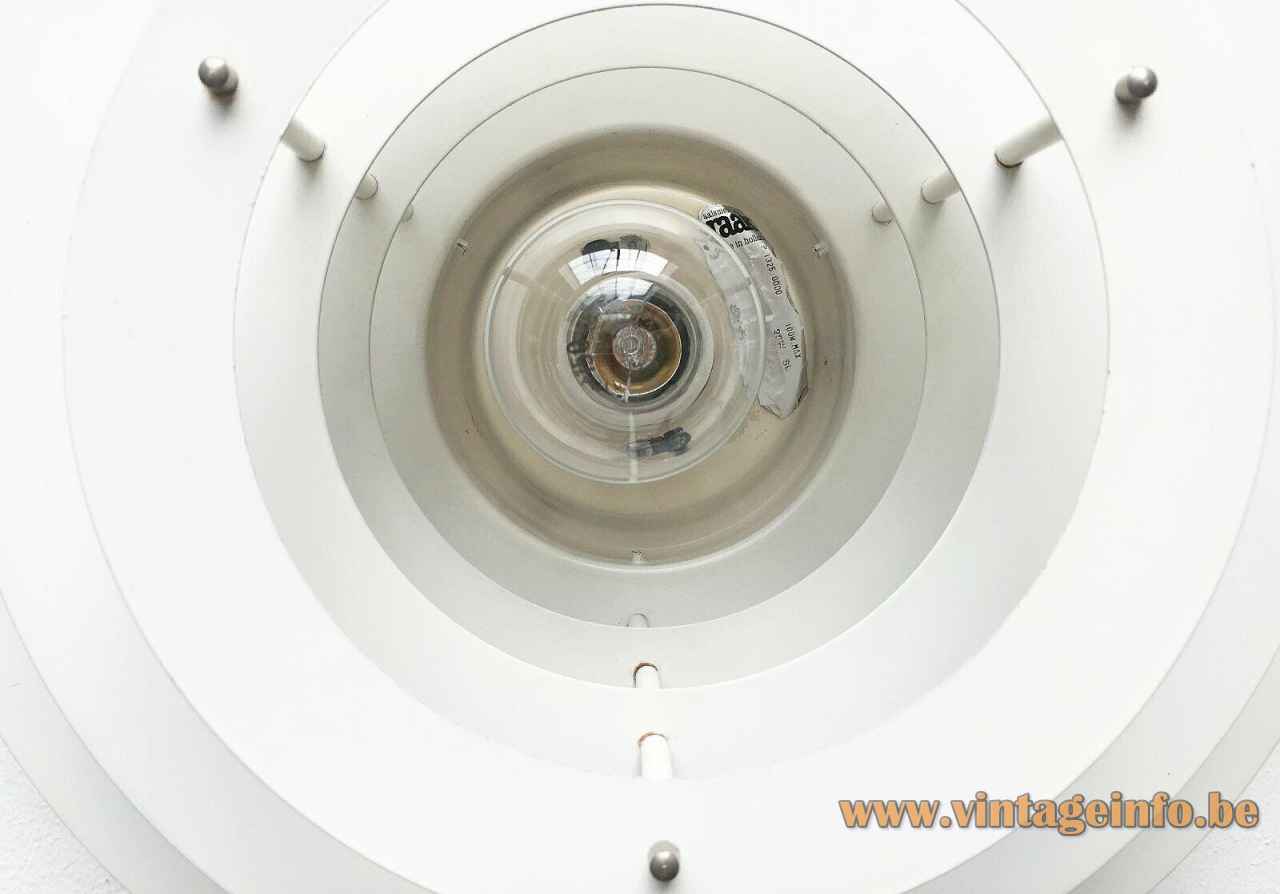 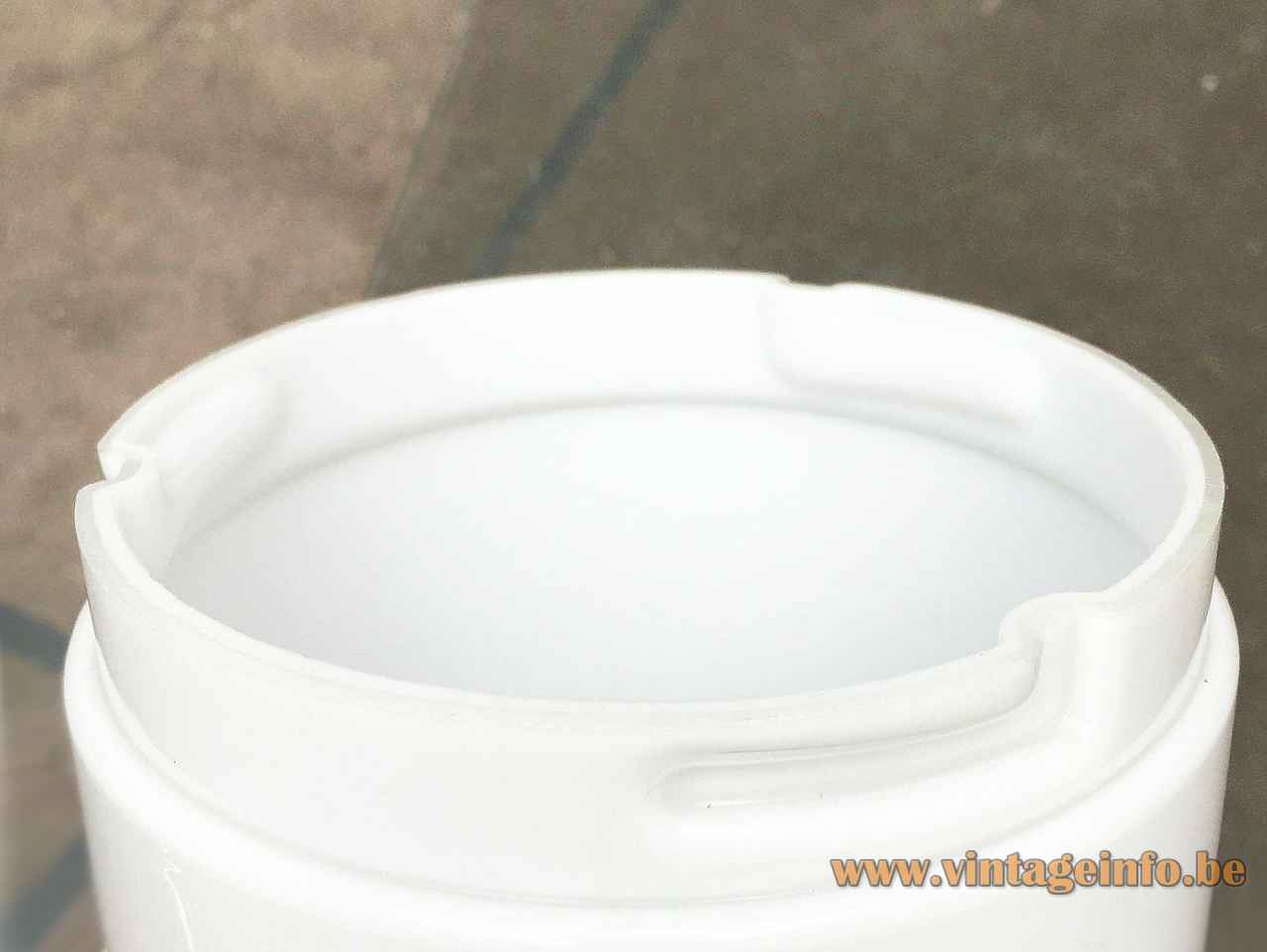 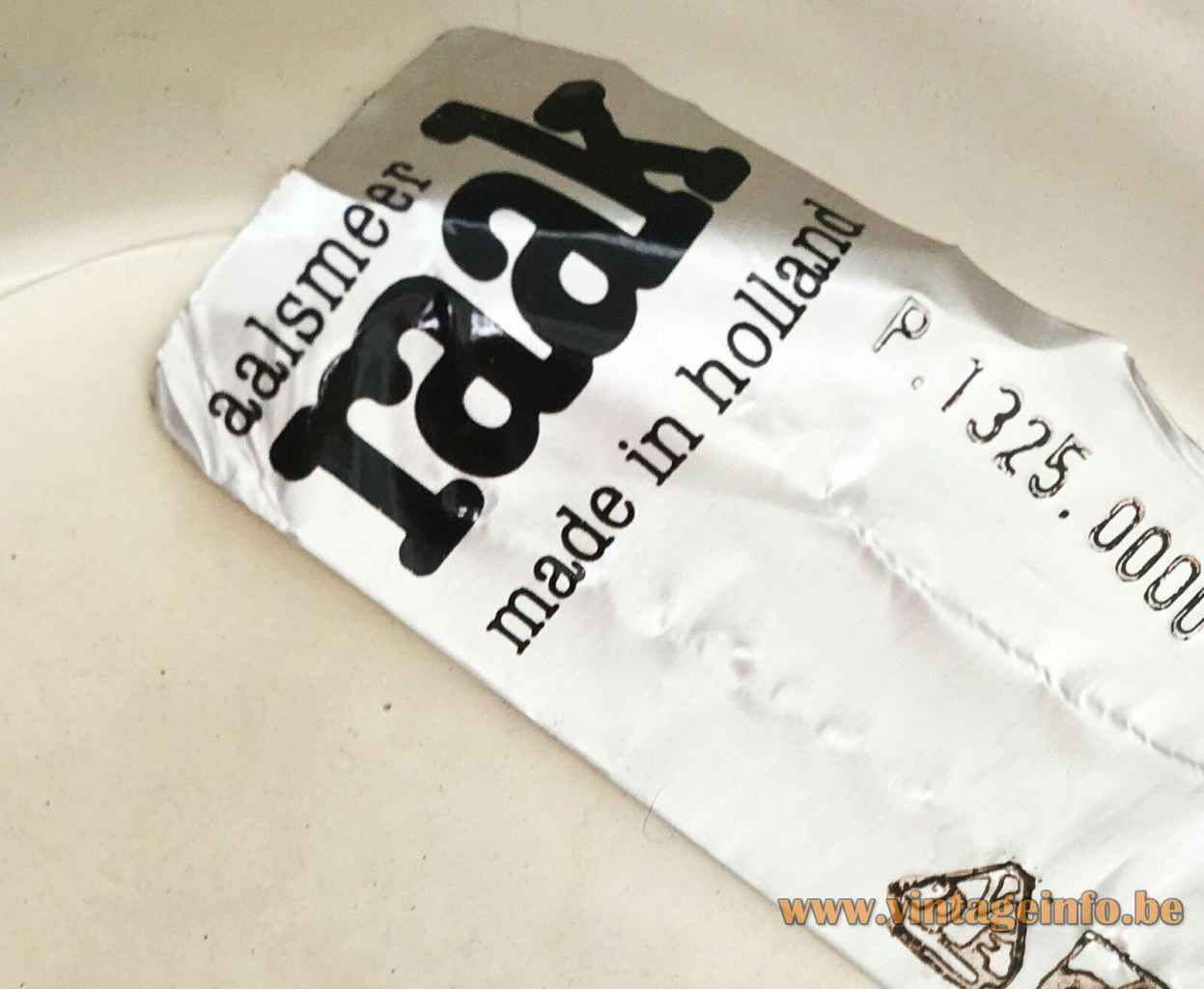 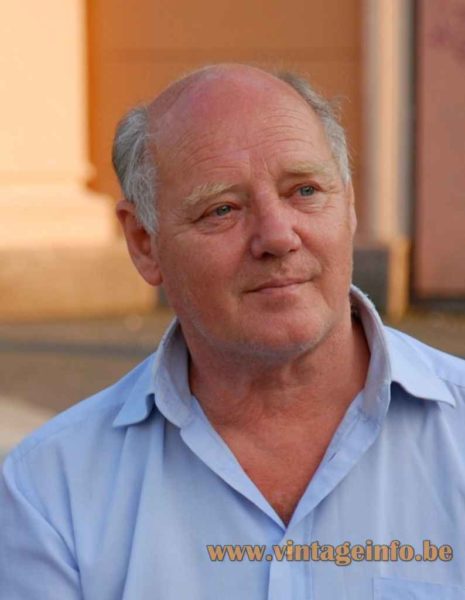 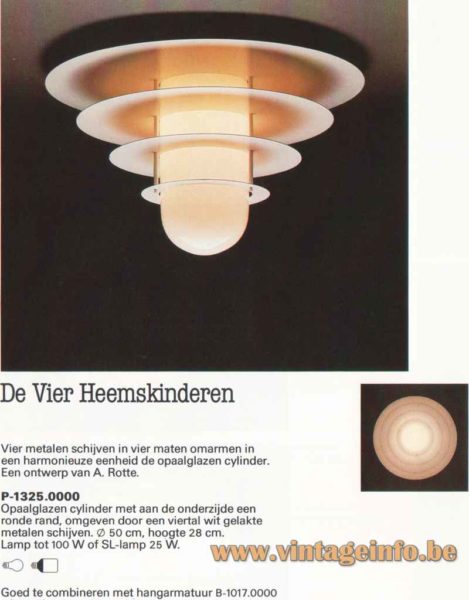 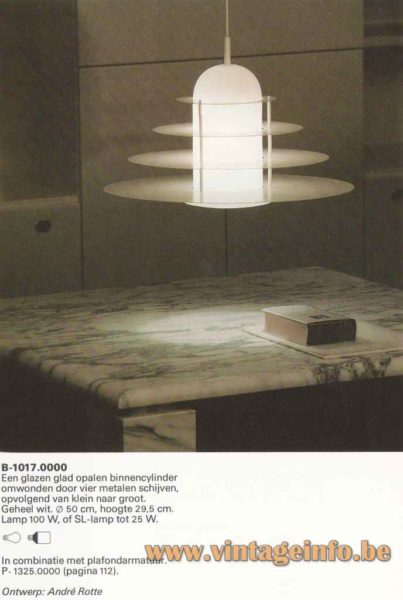 Other versions: The Raak Four Sons Of Aymon flush mount exists also as a pendant lamp.

Translated text from the catalogue: “Four metal discs in four sizes embrace the opal glass cylinder in a harmonious unit.“

Design of these lamps – Andre Rotte

I do not remember the exact design year of this lamp, but it must have been in the period from 1977 to 1980 when I worked with Paul Driessen in Driessen-Rotte Industrial Design.

I came into contact with Carel Lokhorn (I thought through Benno Premsela, where Paul Driessen‘s wife worked) because he was looking for new talent.

Paul Driessen and I made many design proposals, of which only a few found their way into production. Lokhorn and his staff were very particular.

It took at least a year before a producer for the opal glass chalice was found in the Czech Republic and production could start.

Originally only designed as a pendant lamp, I also made a ceiling version on request. At one point RAAK was sold and I lost contact.

The name of these lamps is derived from the medieval story of the magical horse Bayard with the Four Sons Of Aymon on its back; the chalice symbolizes the horse and the four decreasing disks, of course the four brothers who sit on the horse.

Appropriately, my youngest and fourth child was born when the catalogue was published in 1982, so that the lamp still occupies a special place.

Andre Rotte is born in 1947 in Vught, The Netherlands.

After graduating  from “The Design Academy Eindhoven” as a product-designer, Andre worked at the Eindhoven University of Technology as a technical assistant on the design of an electrical city car (ESFA project).

Further he lead for a number of years the design practices of “Driessen & Rotte, Bureau voor Industriele Vormgeving” (Bureau for Industrial Design) and later in “ Buro IV”, as a senior partner with Prof. A. Marinissen and ir. F. Neger.

Assignments were done for companies such as: Fokker Aircraft Industries, Exxon Oil The Netherlands, Grasso Cooling, Bronswerk Airconditioning, Minks Marijnen Refrigerators, Savelkouls Holding, Raak Lighting and many other smaller companies in The Netherlands and Belgium.

Apart from quite a number of successful designed products, from the first assignments on Andre has performed as a design strategist and a manager rather than only as a product designer. Design (in its many expressions and disciplines) as a strategy for companies and institutions has always been his forte and his drive.

Andre Rotte was asked in 1985 to join Philips Corporate Industrial Design (CID) to design for the Lighting Division, quickly followed by a position as Design Director/Manager for the Personal Care Business Group of Philips. In 1987 he was assigned to the position of Senior Design Director for the division of Domestic Appliances and Personal Care of Philips. In the same year, he became a member of the Design Policy Committee of Royal Philips.

Andre joined the management team of Philips Corporate Industrial Design in 1989 as a Senior Director and was asked by Stefano Marzano, in those days the new Managing Director of Design, to take up the position of Design Services Portfolio Director with a focus on the development of new capabilities and services for Philips. In this job, he also managed the newly established Design Research group as an R&D director.

In the mid-nineties Andre Rotte managed the “Vision of the Future” project as the project director with Stefano Marzano as creative director; a worldwide recognized advanced and major design project forecasting leading innovations in consumer and professional product areas.

Since 2000 Andre was responsible as a vice-president of Philips Design for the global portfolio of Business Process Management, overseeing strategy development, planning, implementation, performance management and business improvement as well as Information Technology. In this role working with over 600 professionals worldwide, he co-managed the growth of the Philips Design business both towards internal and external clients.

Fall 2007 Andre retired from Philips and started the consultancy office “Management and Design“ focusing on the integration of design in processes and organizations. Still, he continued as an observer and coach for the Philips High- and Top potential program and coached in this capacity many executives of Philips and affiliated companies.

Apart from different consultancy jobs for i.e. Philips Design, Philips Medical Systems, Philips Lighting, Philips corporate HRM, as well as the Qanu (the accreditation organization of Dutch and Flemish Academic institutes), he took on the positions of CEO of “Design Initiatief”, the National Program for Innovation through Design as well as the chair of the board of “Designlink”, the Dutch chain-organization for Design. Further, he chaired the international committee for the accreditation of Dutch Academic Design educations. (2007, Qanu) and also the accreditation of the Dutch Academic Research programs (2009 Qanu).

Already as a student, Andre was a student member of the board of the Design Academy and the Governmental Dutch Design Council. Further, he has served as a member, treasurer and president of the KIO-board, and on the advisory board of the former Dutch society of Industrial Design (KIO) and was a board member of the Bureau of European Designers Associations.

He represented the Industrial Design community in the “Federation O” as a member of the board. (An early attempt to unite the Dutch Design professionals under one banner). He was a member or he chaired juries for Design awards like the Philips ICSID award, Dutch Design Awards, GIO recognitions, Dutch Furniture awards and the Hema Design prize. He spoke and lectured on Design for international and national audiences.

Andre is a certified Miller Heiman trainer, ISO assessor and completed with a diploma as best in class the Strategic Marketing course of SRM. Further, he was trained as an Officer in the Dutch Special Forces (Korps Commando Troepen) in which he served as a Major till 1997.

The Four Sons of Aymon – Wikipedia

Many thanks to Andre Rotte for al the help and info.