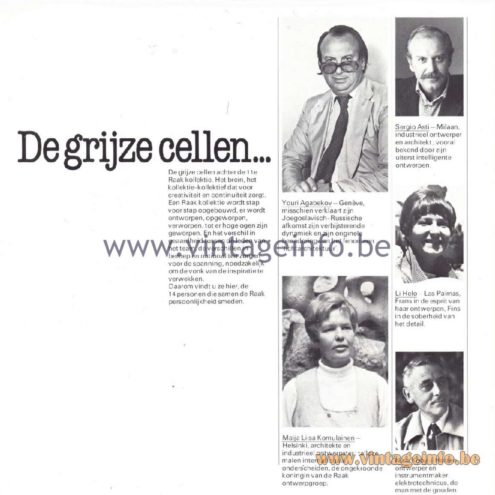 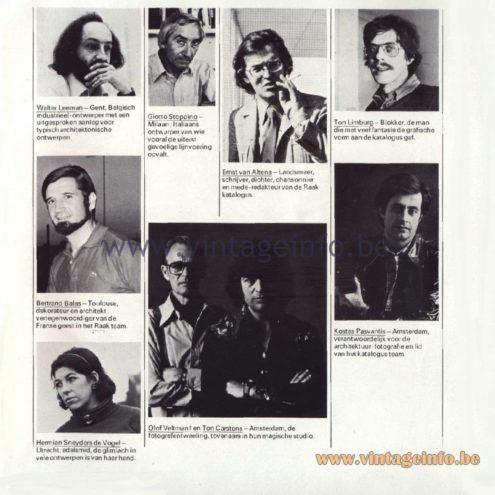 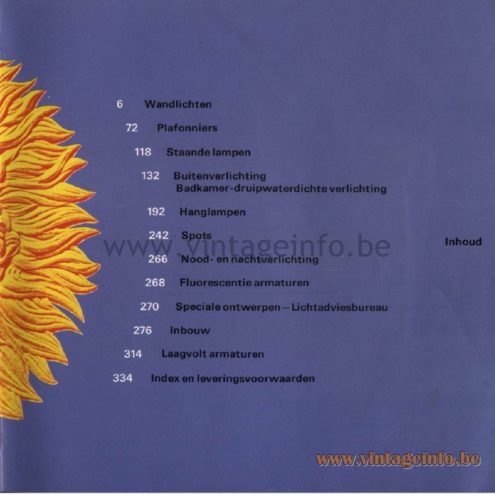 The original language is Dutch

Eleven and his symbols
Some cultures
deny the 10
because 10 stands for boundary,
closure, the end.
10 is a sign of denial.

only 1 symbolizes
the positive and active
the fundamental value of things
and 2 times one is ELEVEN:
a new beginning
sign of revelation
symbol of the Sun.

that is why
Raak launches
after catalogue 9
now catalogue ELEVEN

The grey cells behind the 11th Raak collection. The brain, the collection collective that provides creativity and continuity. A Raak collection is built up step by step, it is designed, erected, rejected, until high eyes are thrown. And the difference in orientation between the members of the team, the differences in profession and nationality, create the tension necessary to provoke the spark of inspiration. That’s why you find them here, the 14 people who forge the Raak personality together.

Youri Agabekov – Geneva
Perhaps his Yugoslav-Russian origin explains his bewildering dynamism and his original approach to the phenomenon of “light architecture”.

Li Helo – Las Palmas
French in the esprit of her designs. Finnish in the austerity of detail.

Bertrand Balas – Toulouse
Decorator and architect; representative of the French spirit in the Raak team.

Ton Limburg – Blokker
The man who gave the graphic form to the catalog with a lot of imagination.

Hermien Sneyders de Vogel – Utrecht
Goldsmith. The smile in many designs is her own.

Kostas Pasvantis – Amsterdam
Responsible for architectural photography and member of the catalog team.