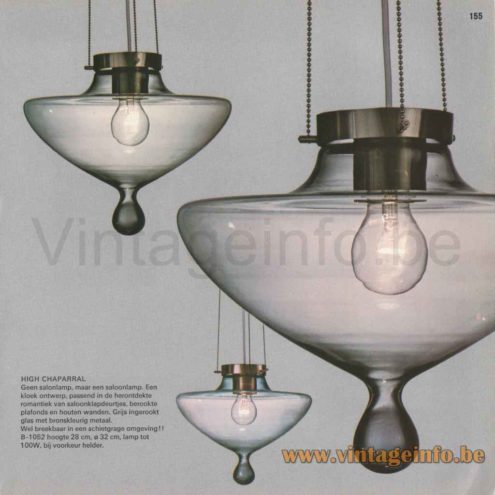 HIGH CHAPARRAL
Not a salon lamp, but a saloon lamp. A
bold design, fitting in the rediscovered
romance of saloon folding doors, smoked
ceilings and wooden walls. Smoked gray
glass with bronze-colored metal.
Fragile in a trigger-happy environment !!
B-1052 height 28 cm, 0 32 cm, lamp up to
100W, preferably clear.

Other versions: The Raak High Chaparral pendant lamp exists as a wall lamp, outdoor wall lamp and flush mount. The wall lamp was made with several different wall mounts over time.

The Raak High Chaparral was made for a long time. You find it with labels from Raak, Amsterdam and Raak, Aalsmeer.  The company was first located at the Prinsengracht 777 in Amsterdam. After the company was sold to ITT in 1974 it moved to Aalsmeer. This one is labeled Aalsmeer.

The designer is not mentioned in the catalogues, unfortunately. But the design is very similar with the droplet lamps from Florence, Italy. You find them everywhere in the streets and houses. The Targetti Sankey company, also from Florence made several lamps in this style. A chandelier can be found over here. A table lamp over here.

The first name of this pendant lamp is High Chapparal. In 1972 it became Troubadour. In the 1978 catalogue it is named Saloon. Crinoline was the last name used in the 1982 catalogue. 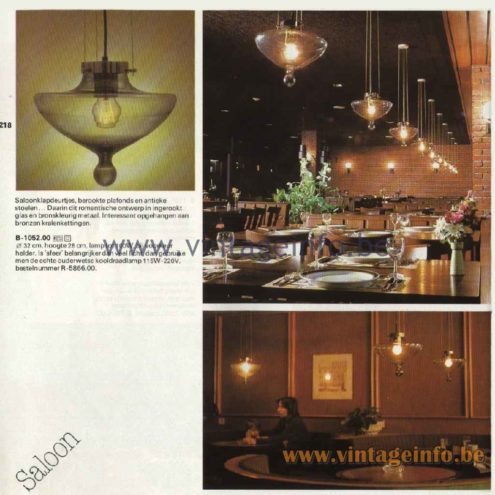