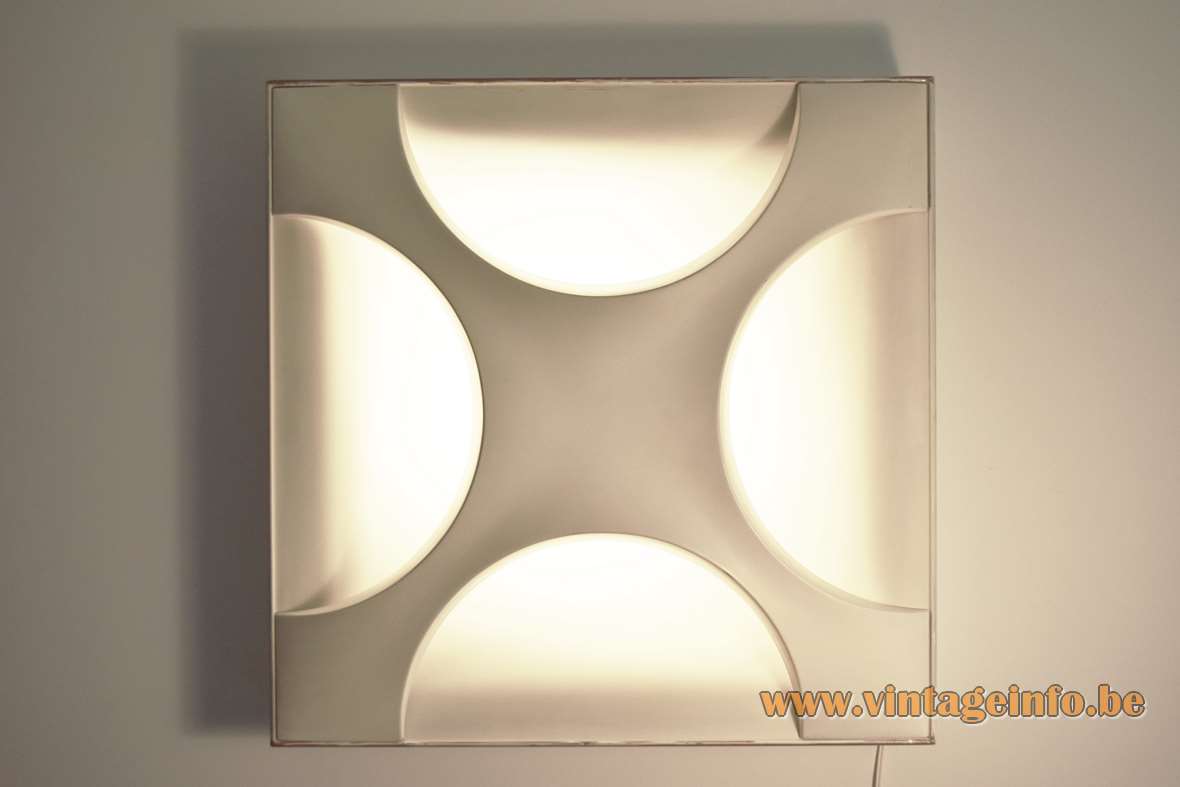 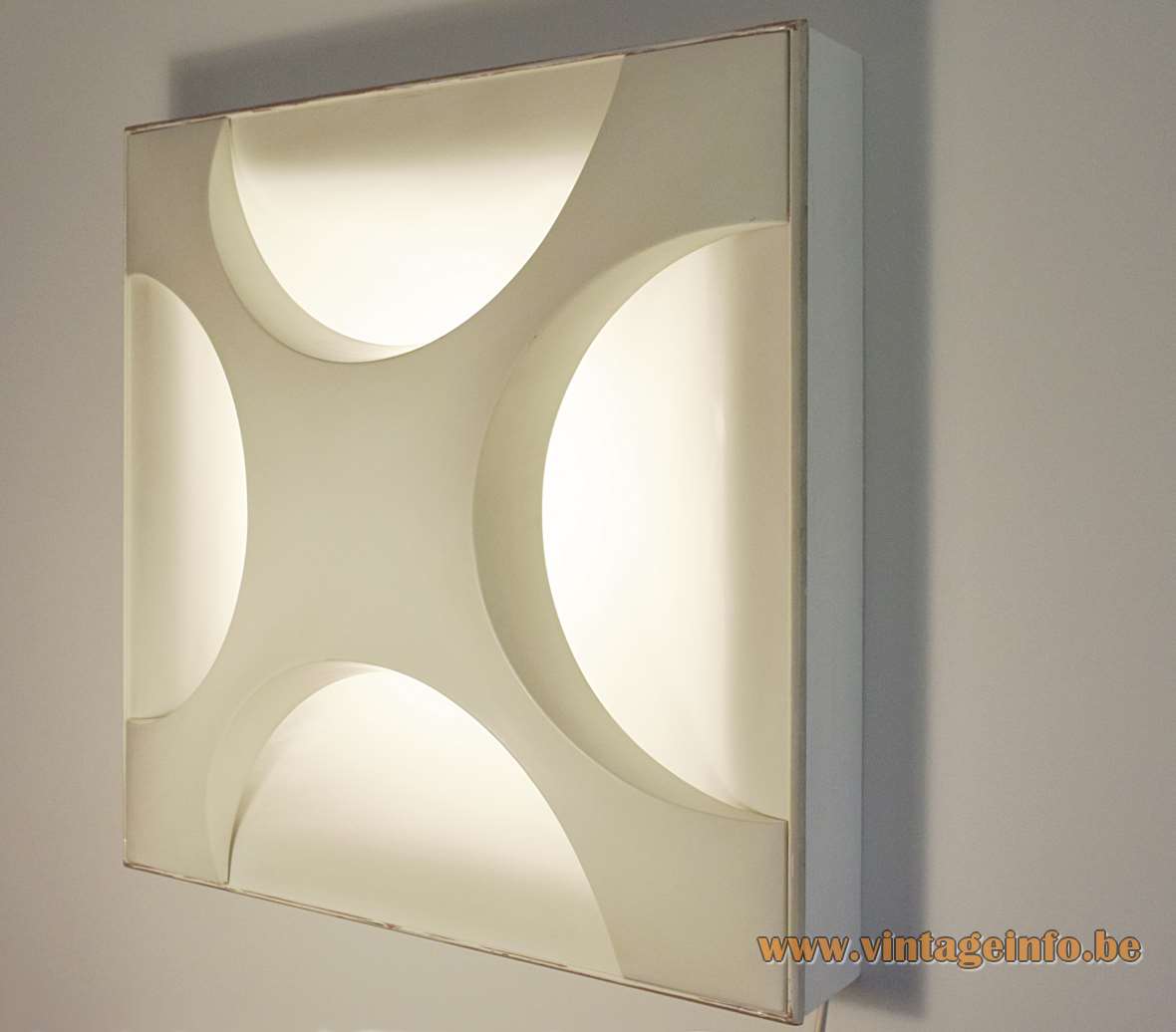 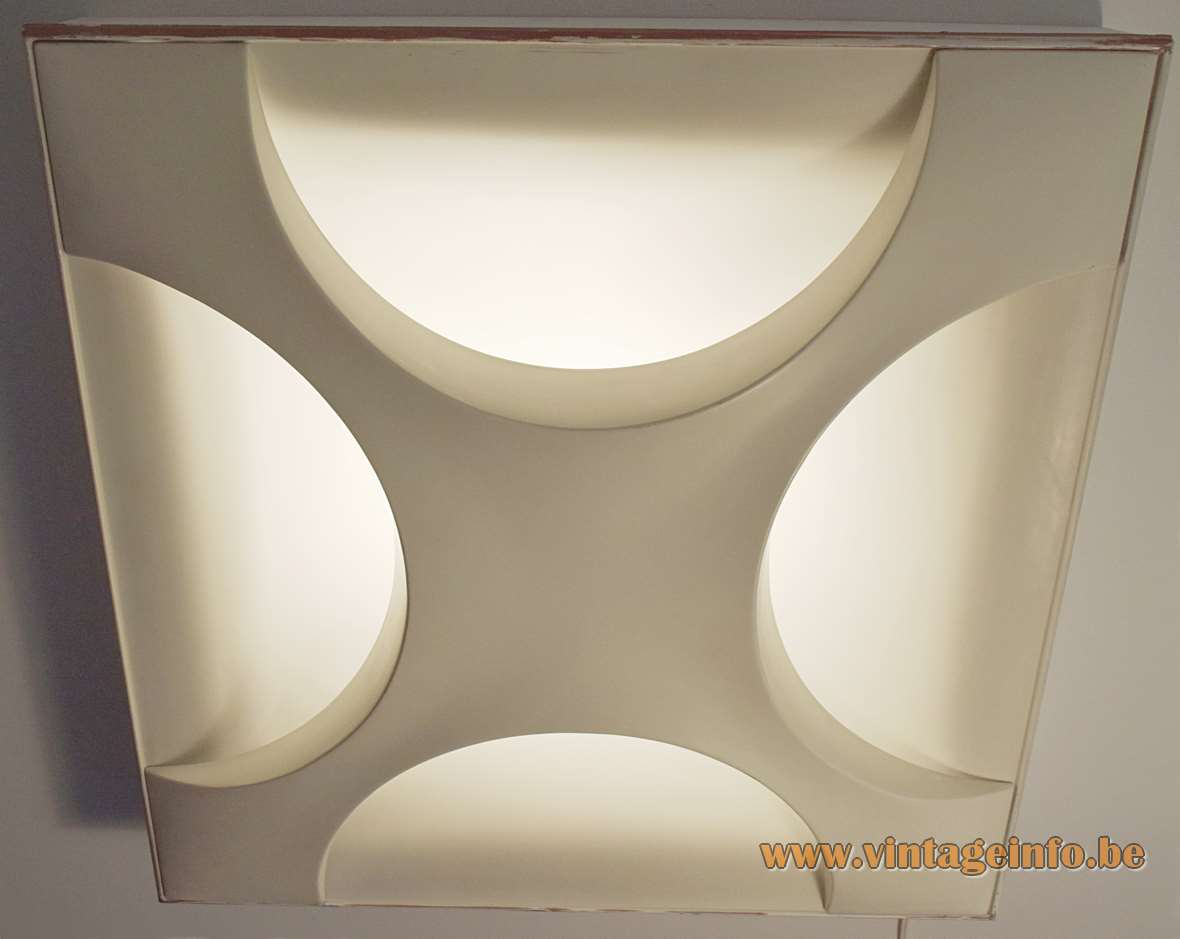 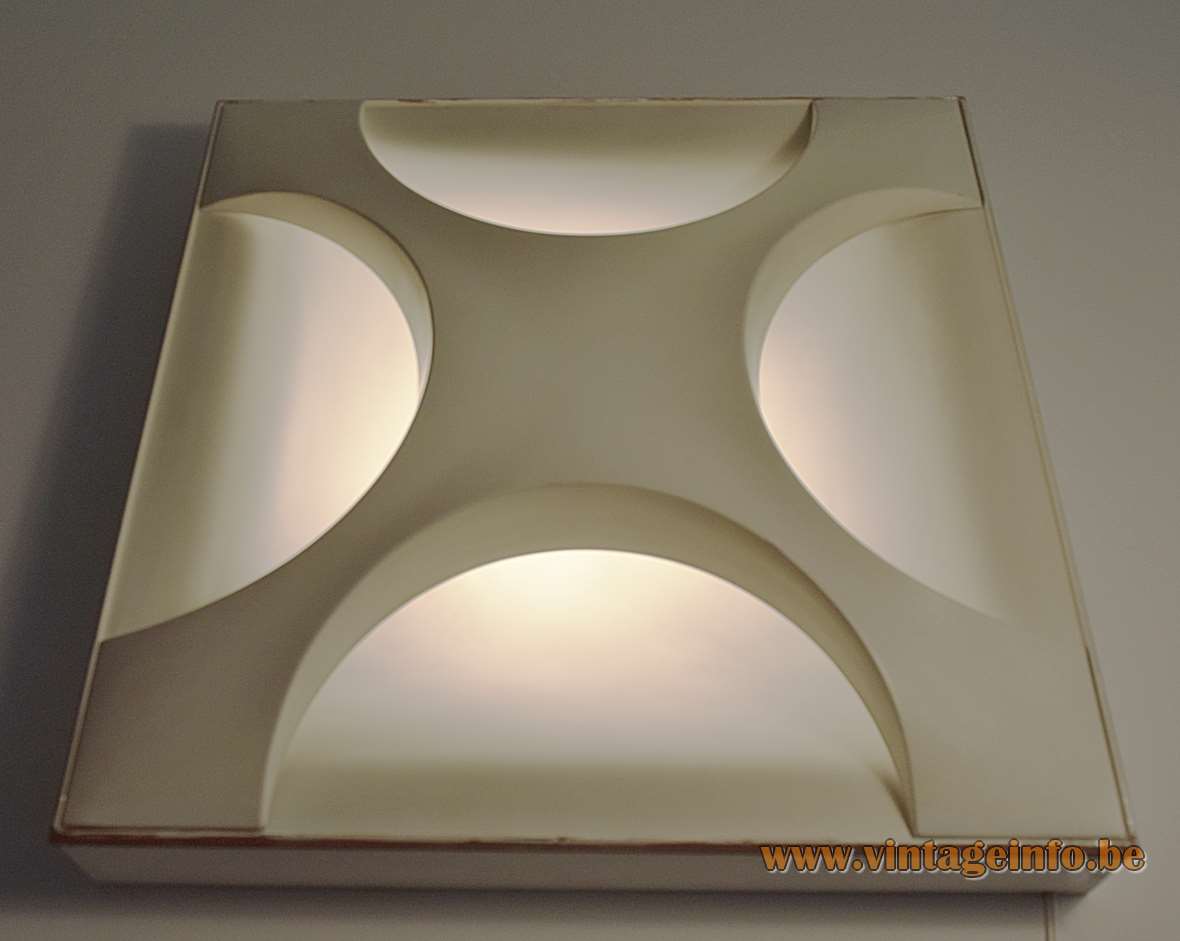 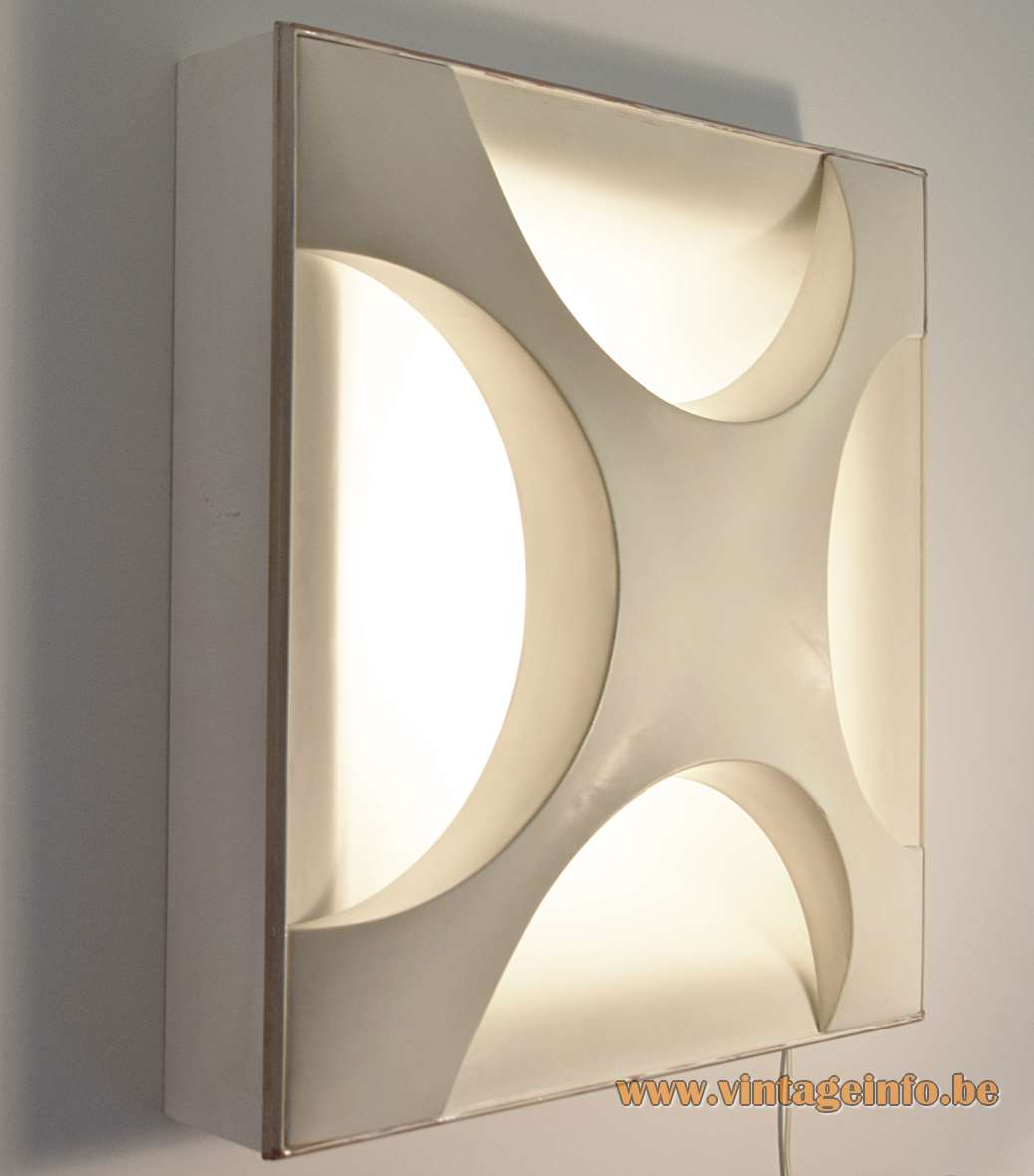 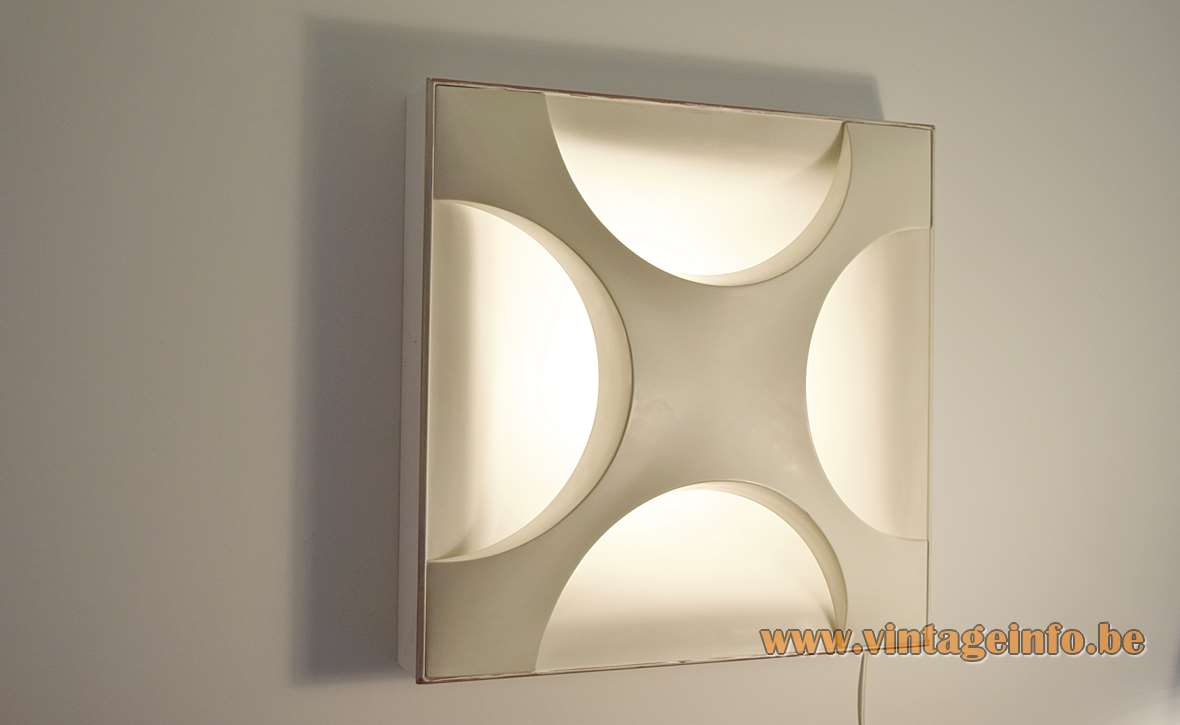 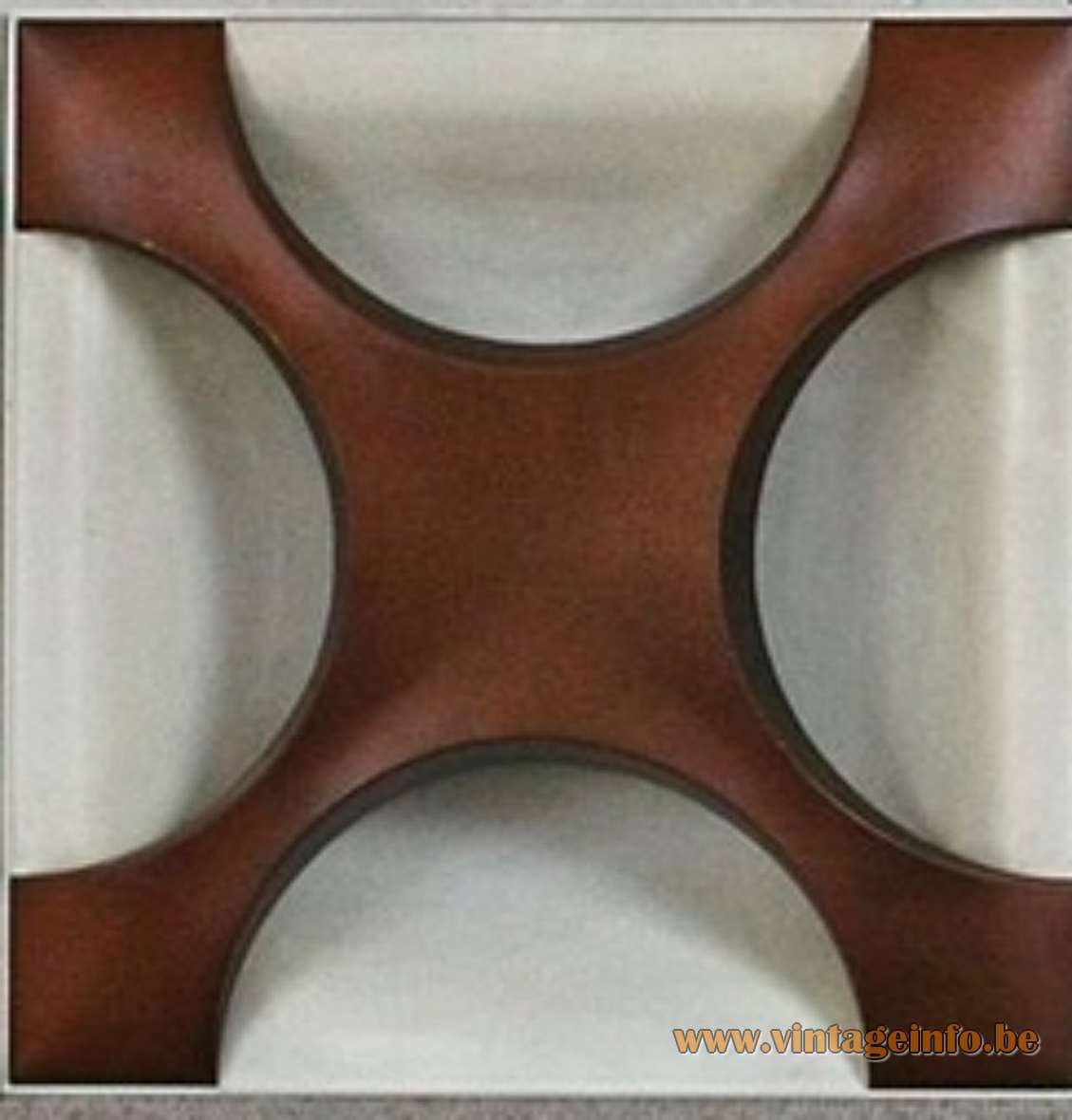 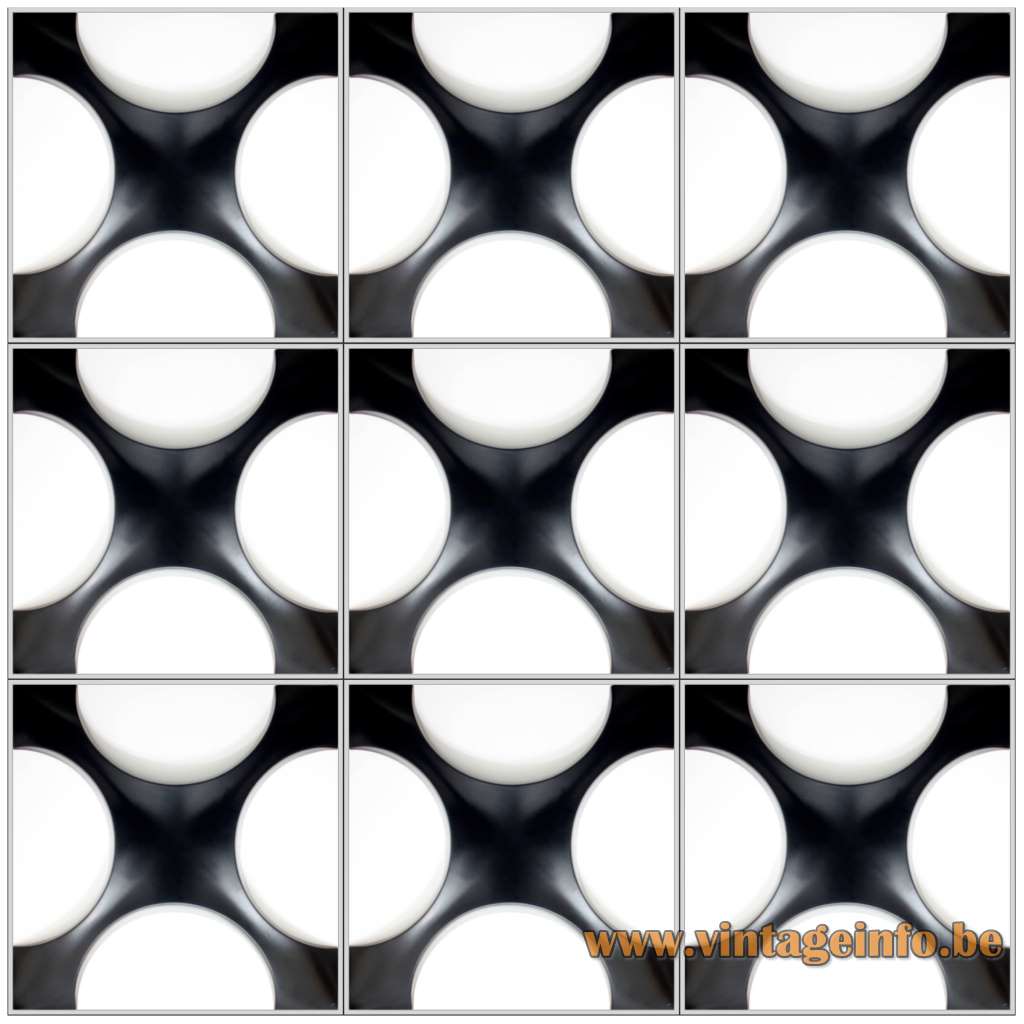 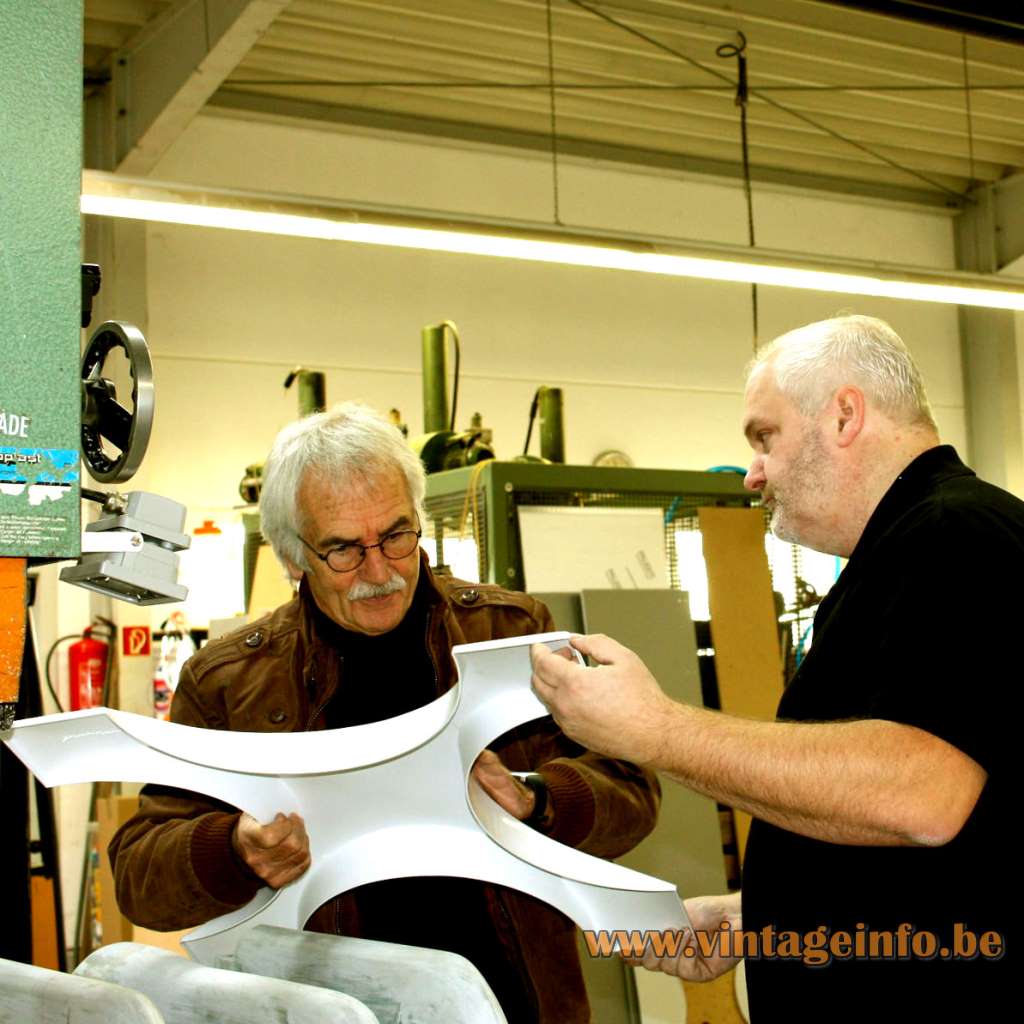 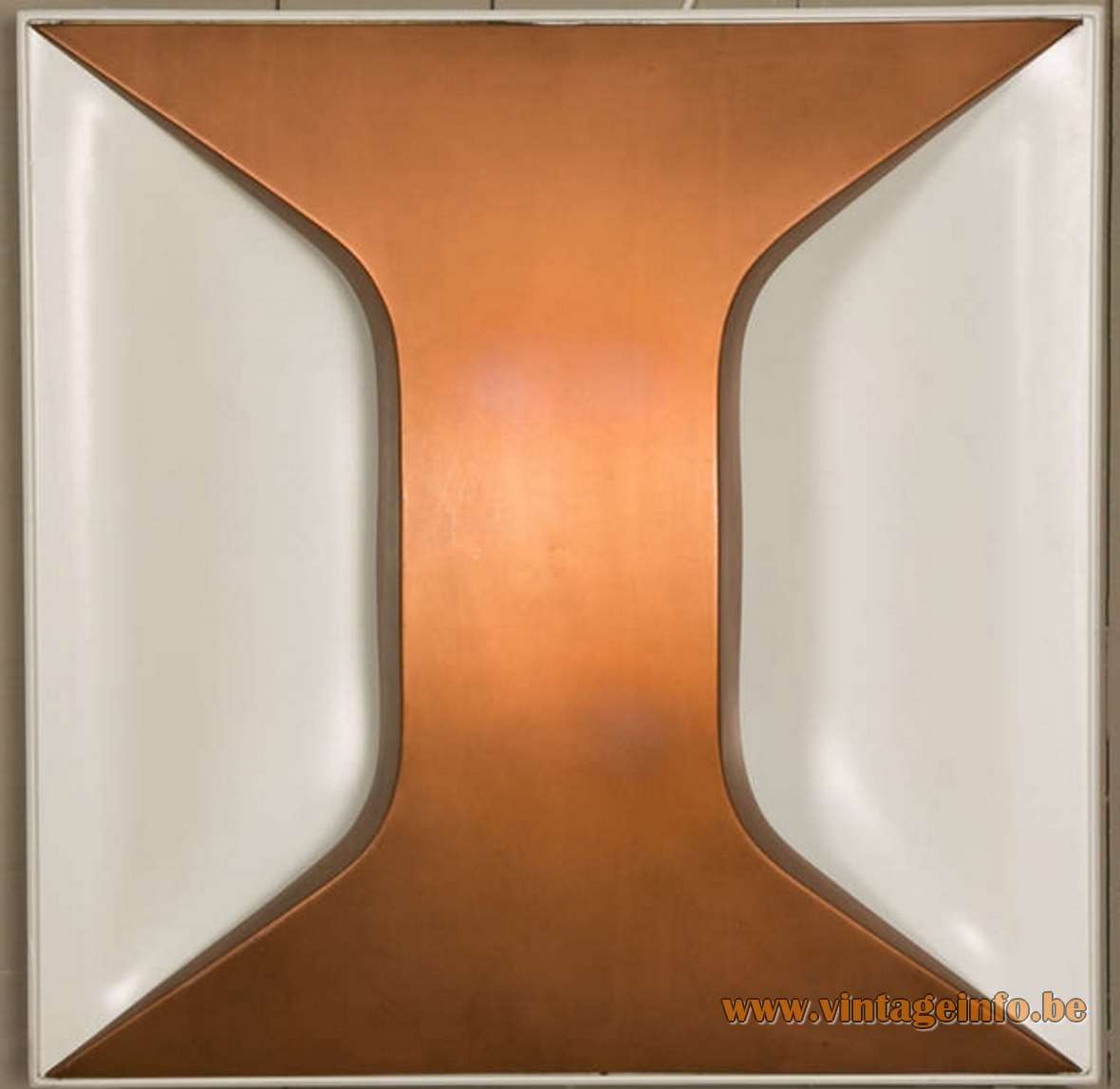 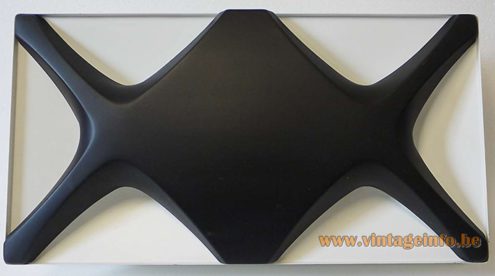 Many thanks to Rolf Krüger for the enlightening information, photos and help.

Other versions: The Staff Oyster wall lamp exists in copper and silver colour. Other colours were also available. The real name of this lamp is Kreuzaustern, Cross Oyster in English. Rolf Krüger designed several other beautiful lamps for the company, a chrome tube flush mount can be found over here.

A re-edition of the Kreuzaustern wall lamp is planned. It is available from 2020. More info about it will be published on this page.

The wall lamp designed by Dieter Witte in 1963 is named Auster or Oyster.

The lampshade is connected with magnets, it can easily removed to replace the light bulbs.

The Kreuzaustern wall lamp received the iF Design Award 1968, the Rosenthal-Studio-Preis 1968 and the LGA-Zentrum Form in 1968.

The Auster wall lamp of Dieter Witte was awarded in 1963 with the Guten Indstrieform award (Good industrial form).

The black wall lamp on this page is designed by Klaus Link. It was produced by Heinz Neuhaus Leuchten. Also Solken-Leuchten made their version of this type of wall lamps.

Staff also produced the Kreuzaustern lamps for other companies. The Cross Oyster lamp appears in the Danish Lyfa catalogue in 1972 and has the name Hannover.

Dieter Witte went to school at the Kunstgewerbeschule Hannover (School of Applied Arts) in the German city Hanover. He has been working as a freelance lamp designer since 1966 for different industrial companies, including Osram, Erco and Staff. Many of his projects are design classics.

Staff – Staff & Schwarz Leuchtenwerk (lighting plant) – was established by Alfred Staff and Otto Schwarz in Lemgo, West Germany in 1945. In 1994 Zumtobel bought the company.
History of the company can be found here: 60 Years of Light from Lemgo – Zumtobel plant celebrates historic milestones
iF Design Award in 1968
Article about the new edition in the German newspaper Westfalen Post
Ballon (2018) – Wikipedia – in German
Ballon (2018) – IMDb

The Staff Oyster wall lamp was used as a prop in the German film Ballon from 2018. A movie about two families from the GDR who flew to West Germany with a homemade hot-air balloon in 1979. It was used in an East German house what is very unlikely at that time. Staff was a West German lighting company and the East was communist and had his own lighting firms, cars, motorcycles and so on. Everything that was sold came from behind the Iron Curtain. Here together with the Raak Fuga, what is even more unlikely, because that is a Dutch lamp. 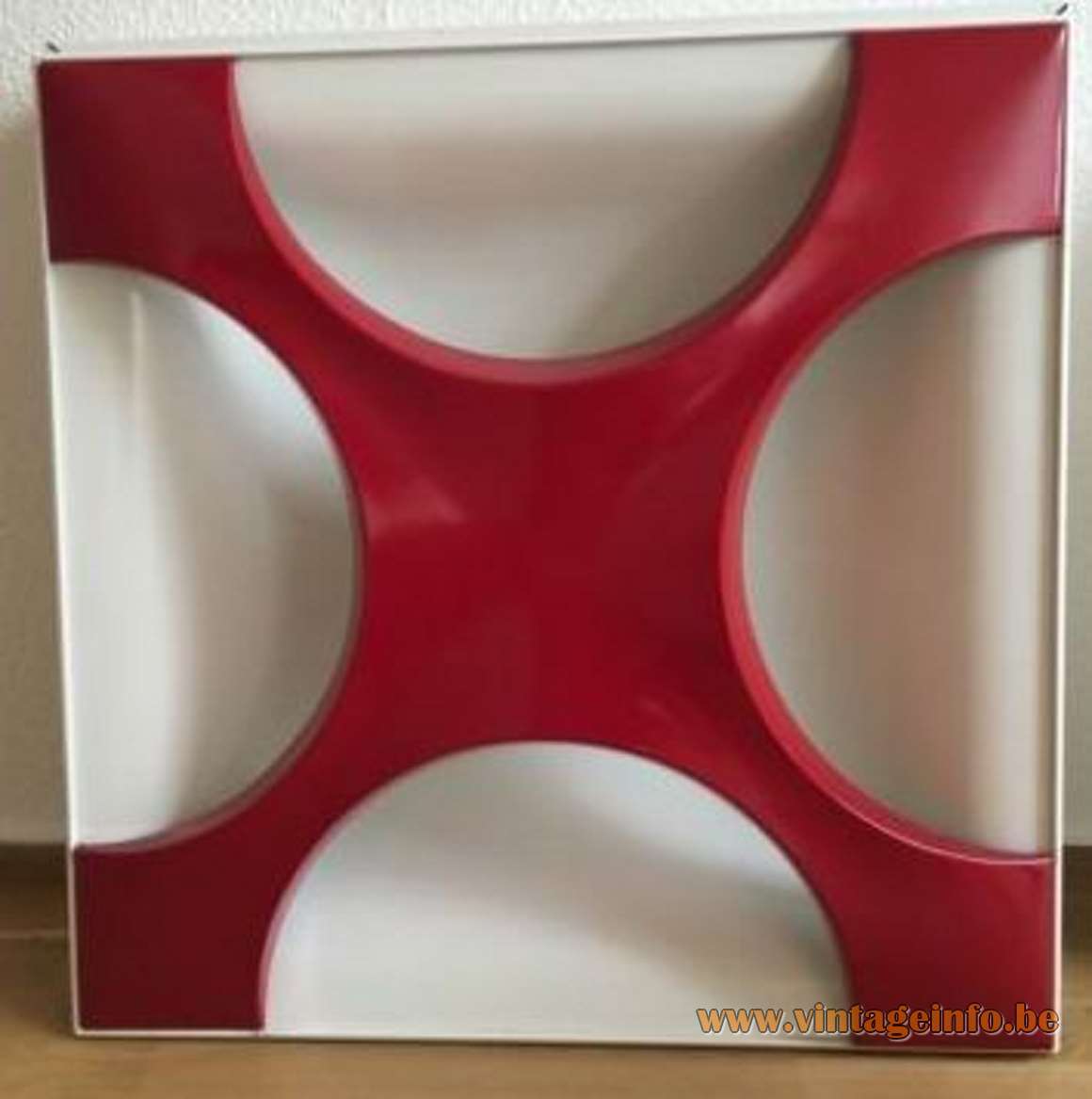 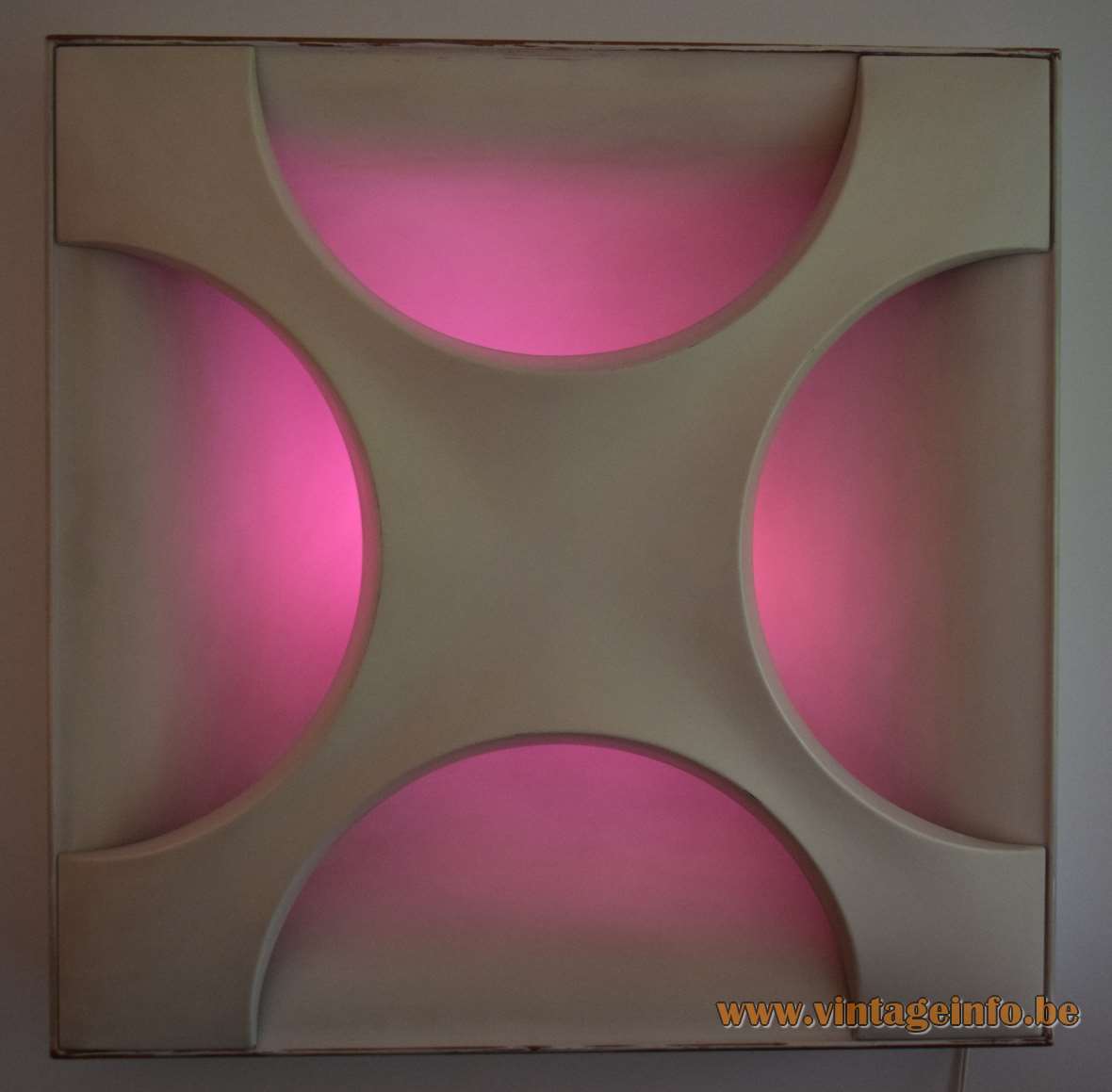