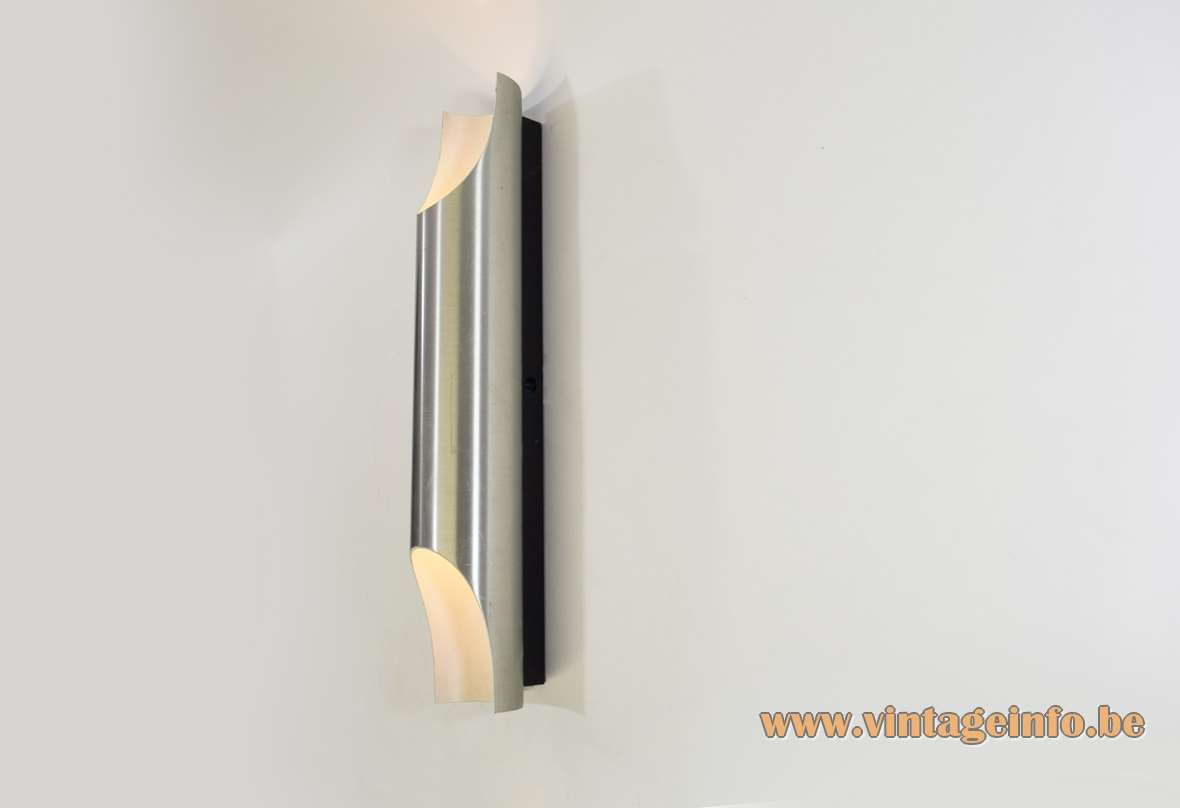 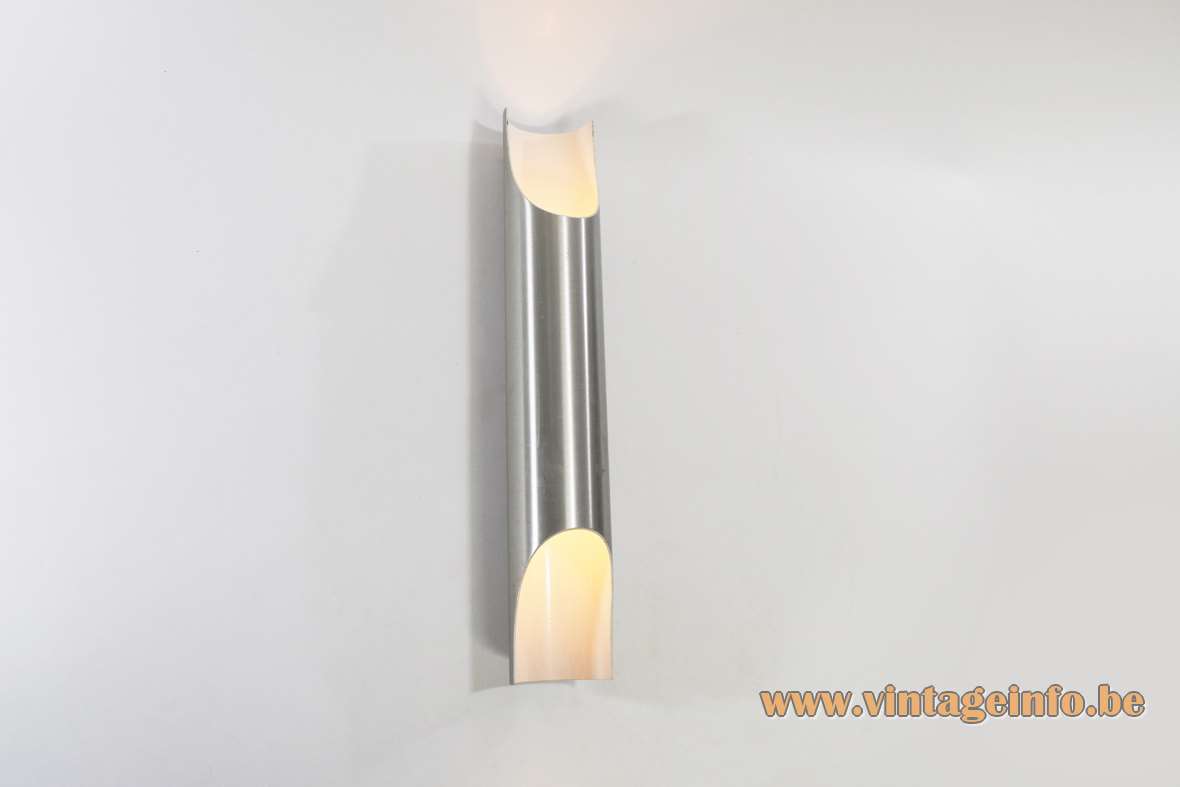 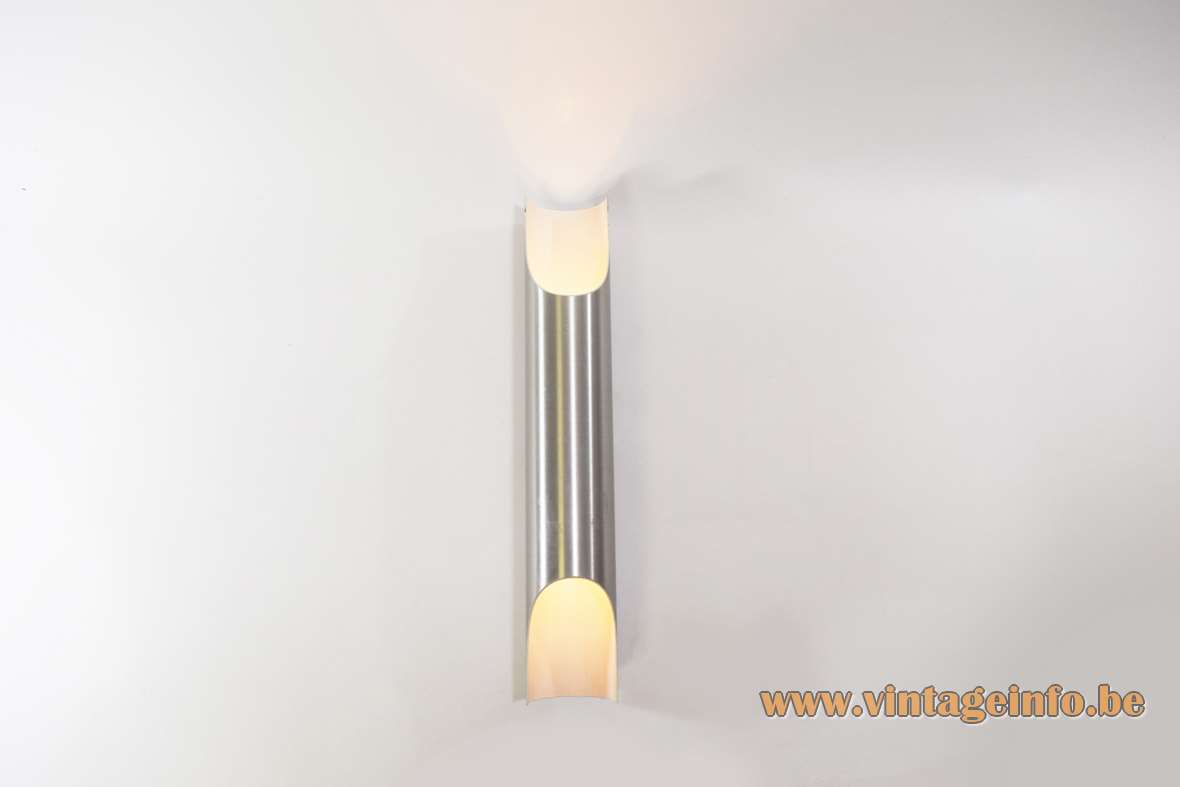 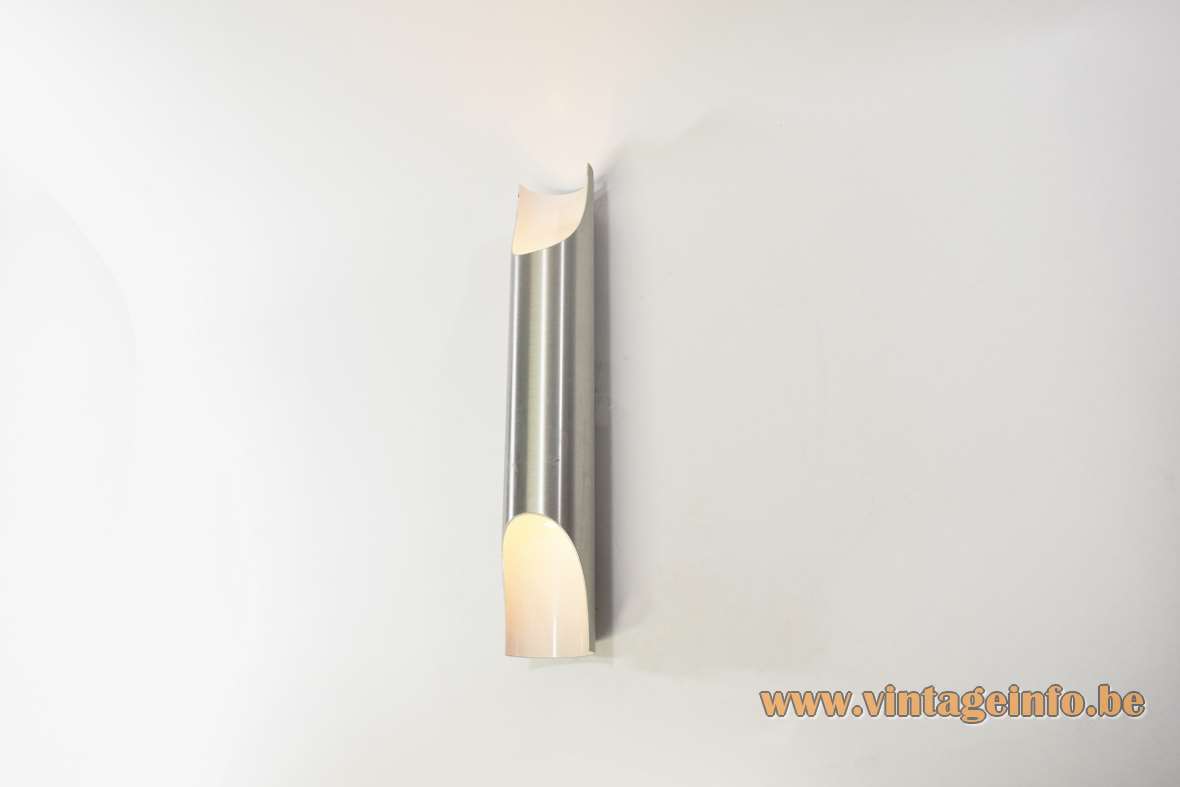 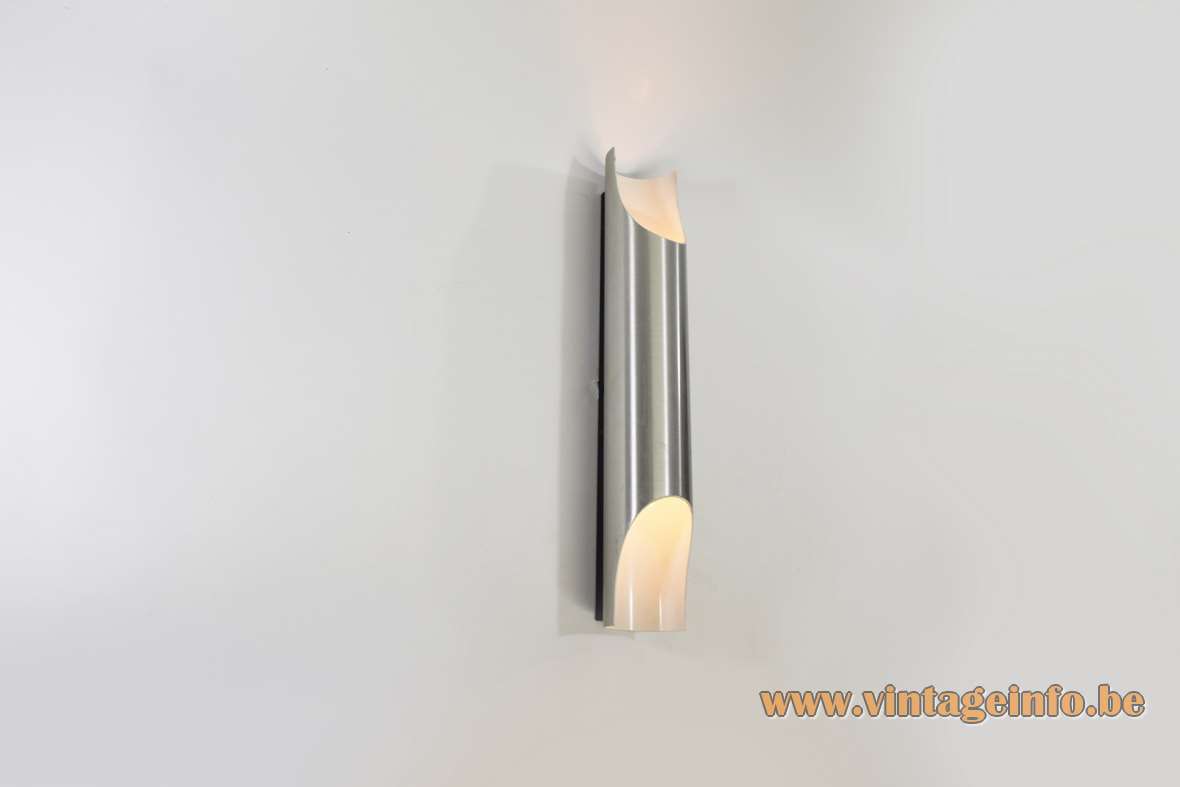 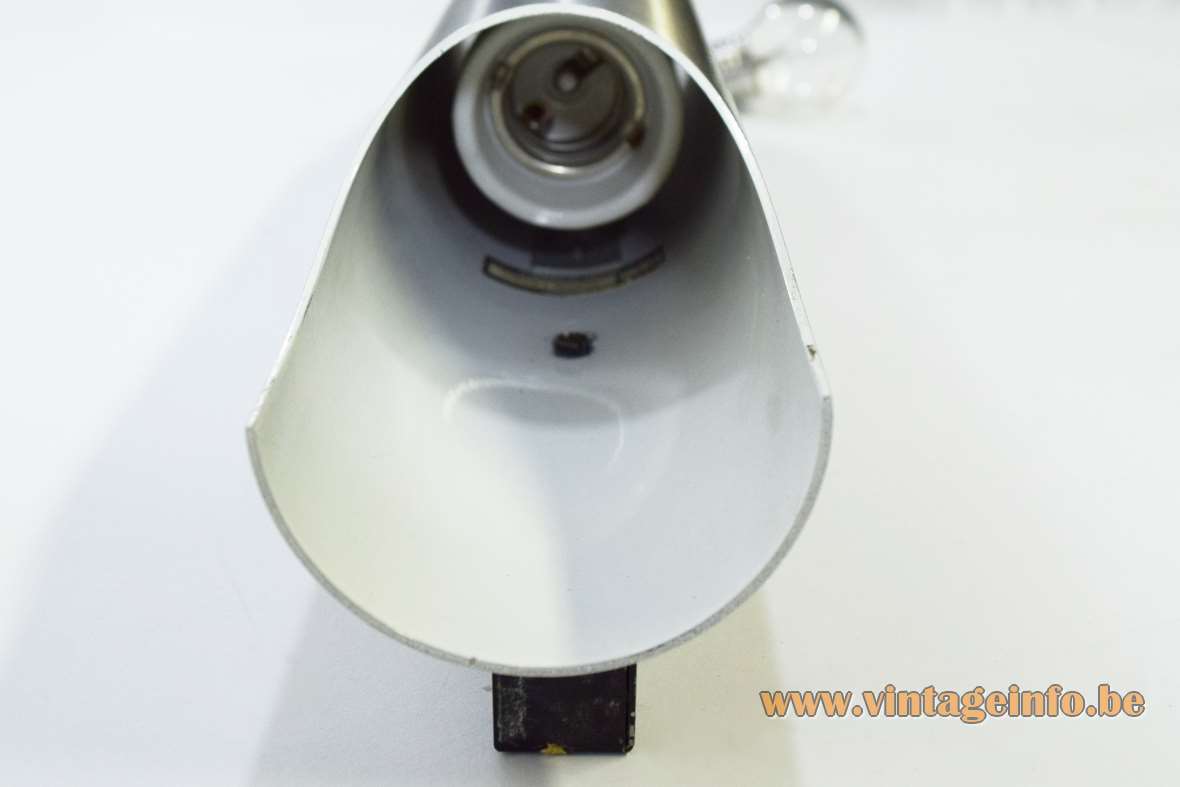 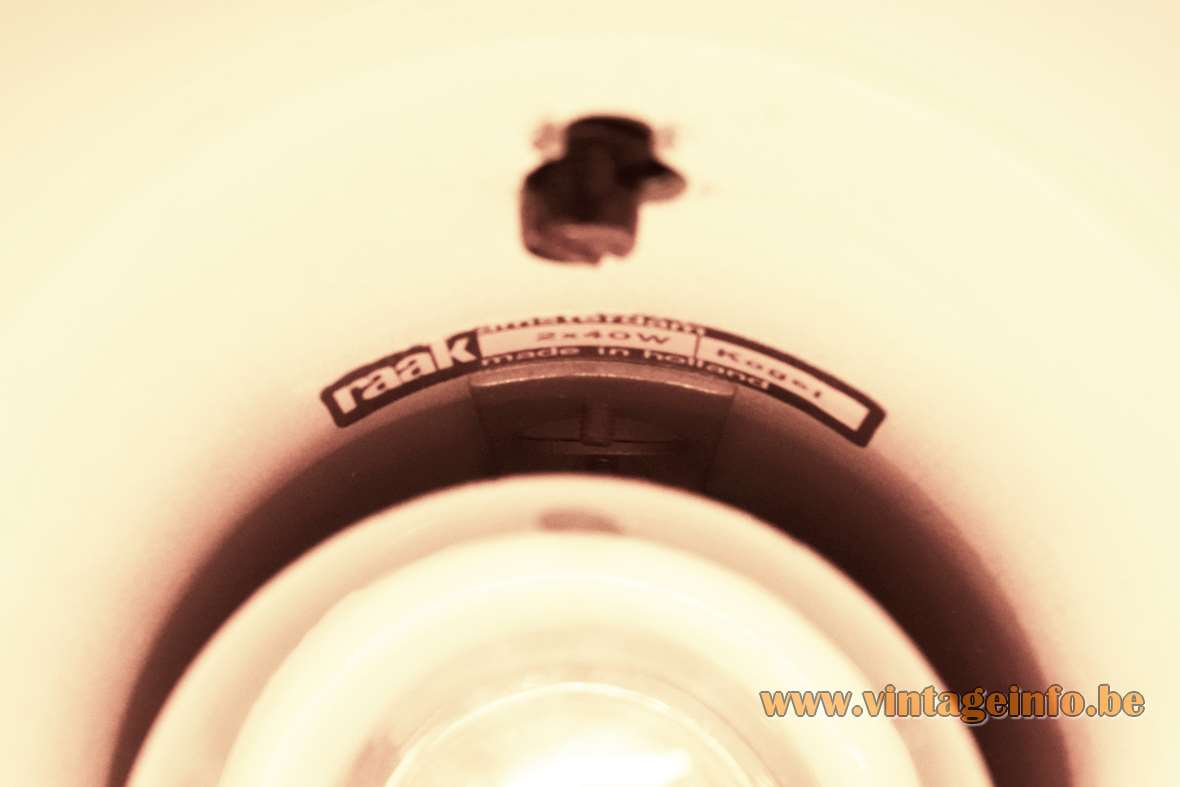 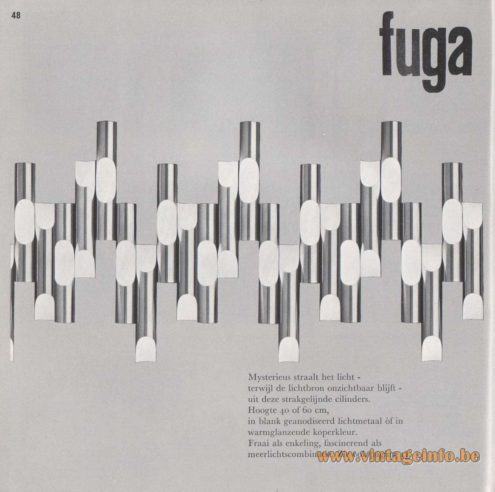 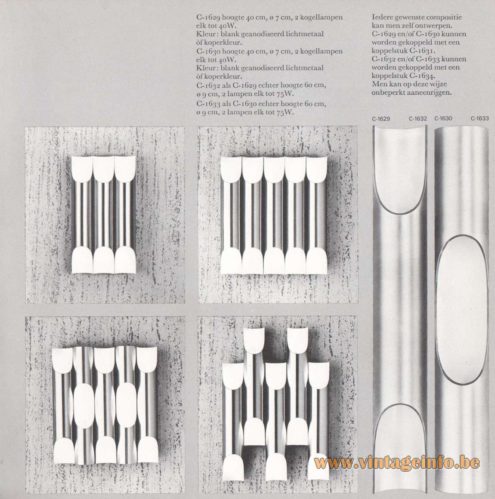 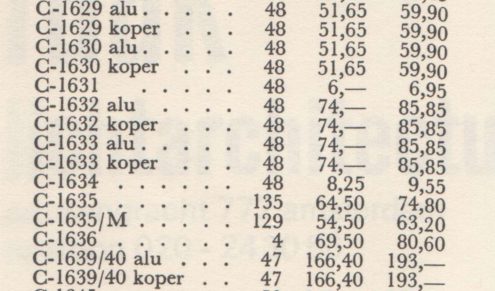 The Raak Fuga aluminium wall lamp was used as a prop in the 1976 French film Le Corps De Mon Ennemi (Body of my enemy). Starring Jean-Paul Belmondo, Bernard Blier and Marie-France Pisier. Many Raak lamps together with Stilnovo and Harvey Guzzini lamps appear in this movie. 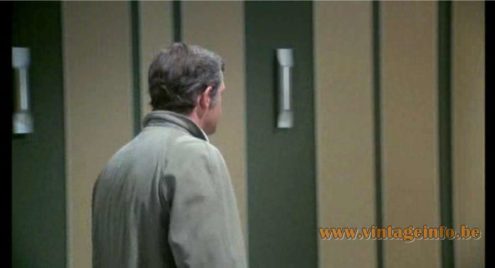 Other lamps in the 2013 film The Art Of The Steal

Other versions: This Raak Fuga aluminium wall lamp exists also in copper coloured anodised aluminium. Made as a single tube and table lamp, 3 tubes and 5 tubes and a big version (60 cm – 23.62”). The big version was always sold as 1 tube. It is never together with others.

These wonderful Raak Fuga aluminium wall lamps are designed at the end of the 1950s by the Finnish architect and industrial designer Maija Liisa Komulainen (born January 29, 1922), one of the top designers of the Raak design team from Amsterdam, Holland. Komulainen won several international awards with her designs.

The Raak Fuga aluminium wall lamp was used as a prop in the Edouard Molinaro comedy film Oscar from 1967. A movie with French comedy actor Louis de Funès (1914-1983). Lamps by Raak, Artemide, Maison Jansen, and many other producers appear in this film.

The Raak Fuga aluminium wall lamp was used as a prop in the Jean Girault movie Jo from 1971.  It is also known in English as Joe: The Busy Body or The Gazebo. A movie with the famous French comedy actor Louis de Funès (1914-1983). Also Cassiopée chandeliers made by Max Sauze and Lita wall lamps by Jacques Biny appear in this comedy. A Pan wall lamp designed by Bent Karlby for Lyfa is also present.

Lamps in the movies – Other films

The Raak Fuga aluminium wall lamp was used as a prop in the German film Ballon from 2018. A movie about two families from the GDR who flew to West Germany with a homemade hot-air balloon in 1979. It was used in an East German house what is very unlikely at that time. Raak was a Dutch lighting company and the East was communist and had his own lighting firms, cars, motorcycles and so on. Everything that was sold came from behind the Iron Curtain. Here together with the Staff Oyster wall lamp, what is also unlikely, because that is a West German lamp.

Several big versions of the Raak Fuga aluminium wall lamp were used as a prop in the British dystopian horror film High-Rise from 2015. Starring Tom Hiddleston, Jeremy Irons and Sienna Miller. Many lamps appear in this film. You can find the others over here.

2 single Raak Fuga wall lamps were used as a prop in the 2013 Canadian comedy film The Art Of The Steal. Starring Kurt Russell, Jay Baruchel and Katheryn Winnick. The metal wall mount of this couple lamps is not original. Lamps made by the Canadian Rougier, Reggiani, FLOS, AV Mazzega and Quality System appear in this film. A Fuga wall lamp made of 3 tubes is also featured in the film. 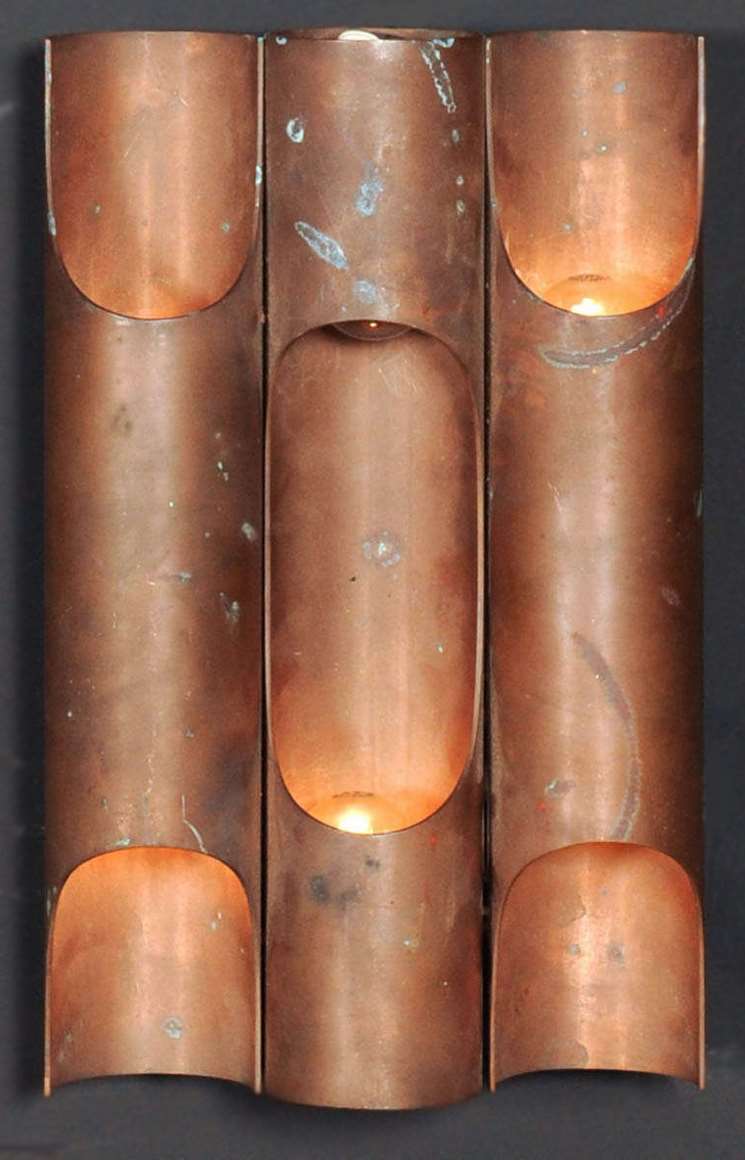 A prototype made of copper and wood can be found on the 1stdibs website: One of a kind prototype of the “Fuga” sconce for the firm Raak