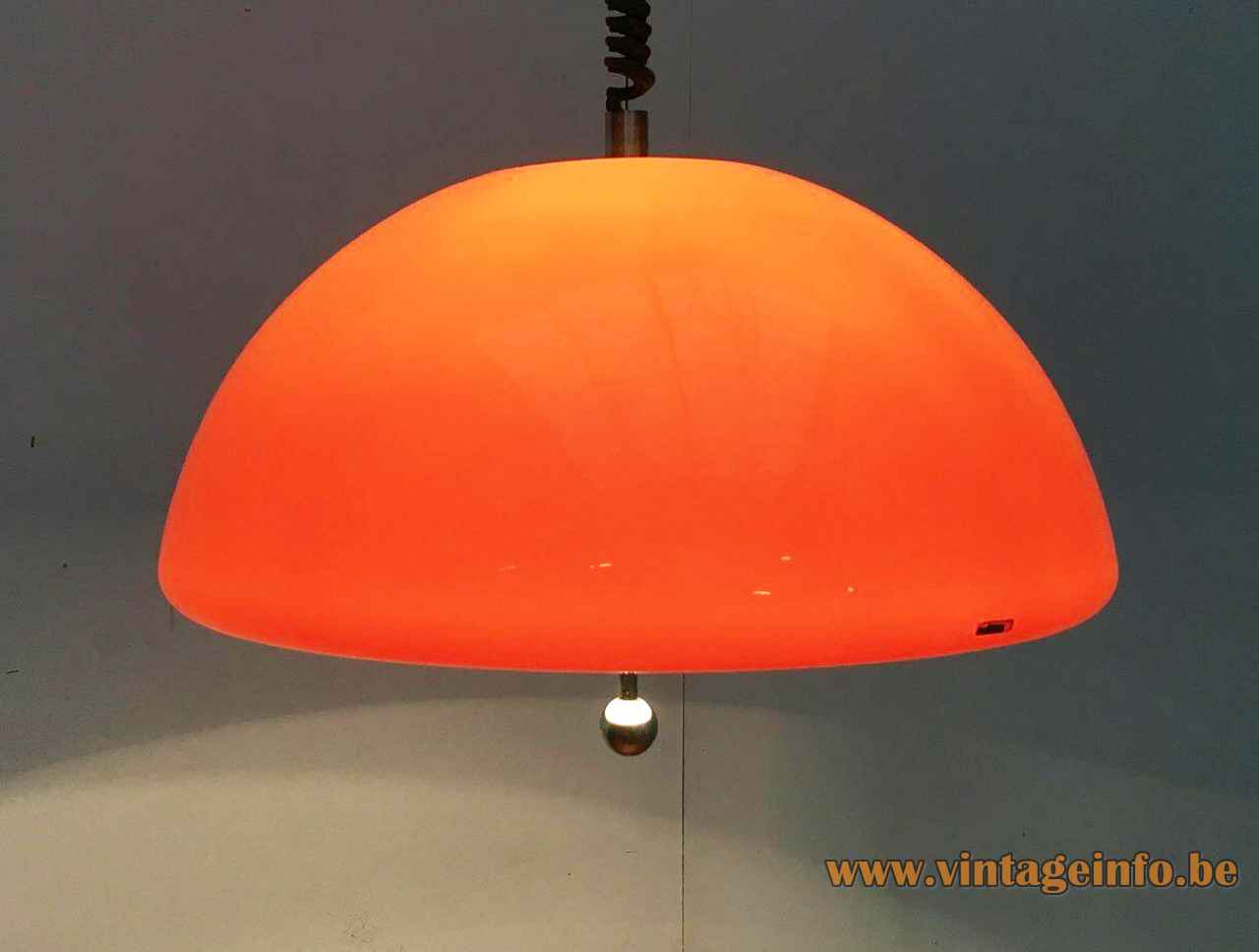 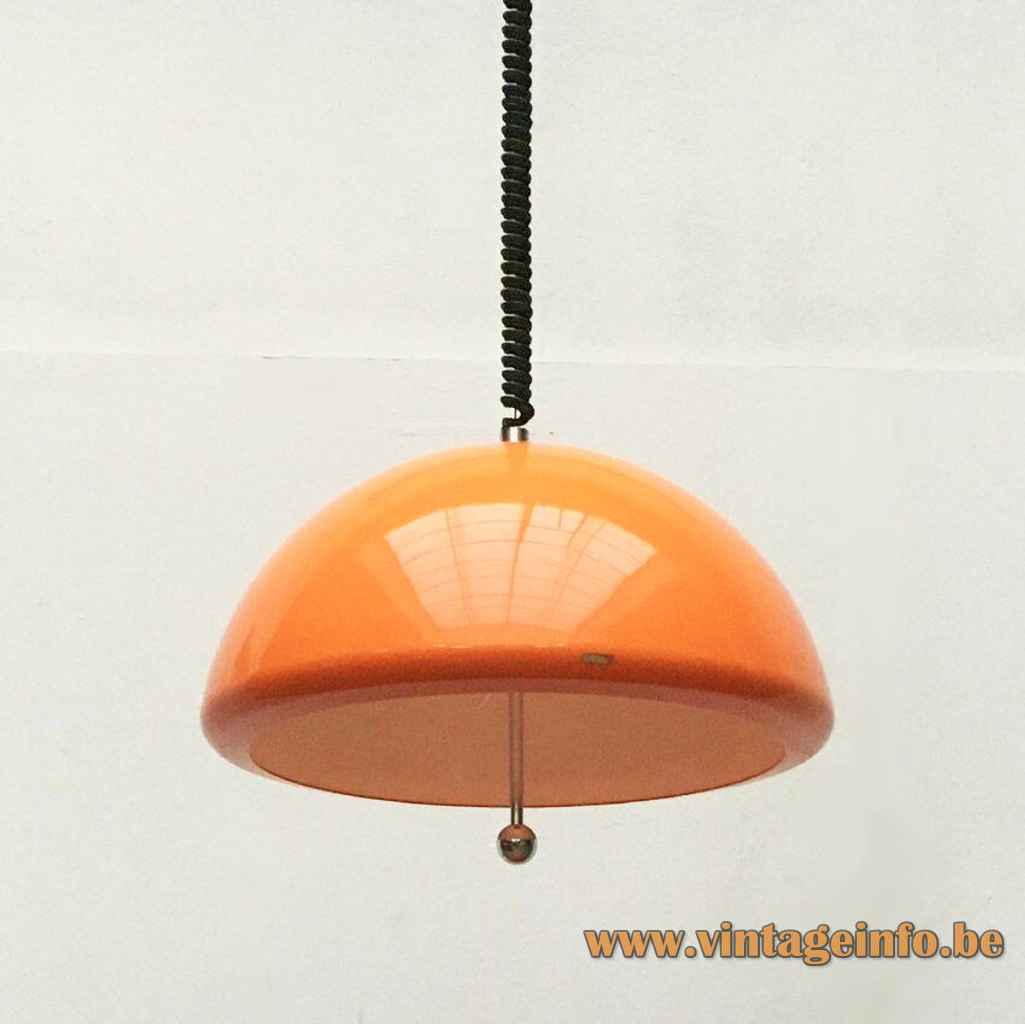 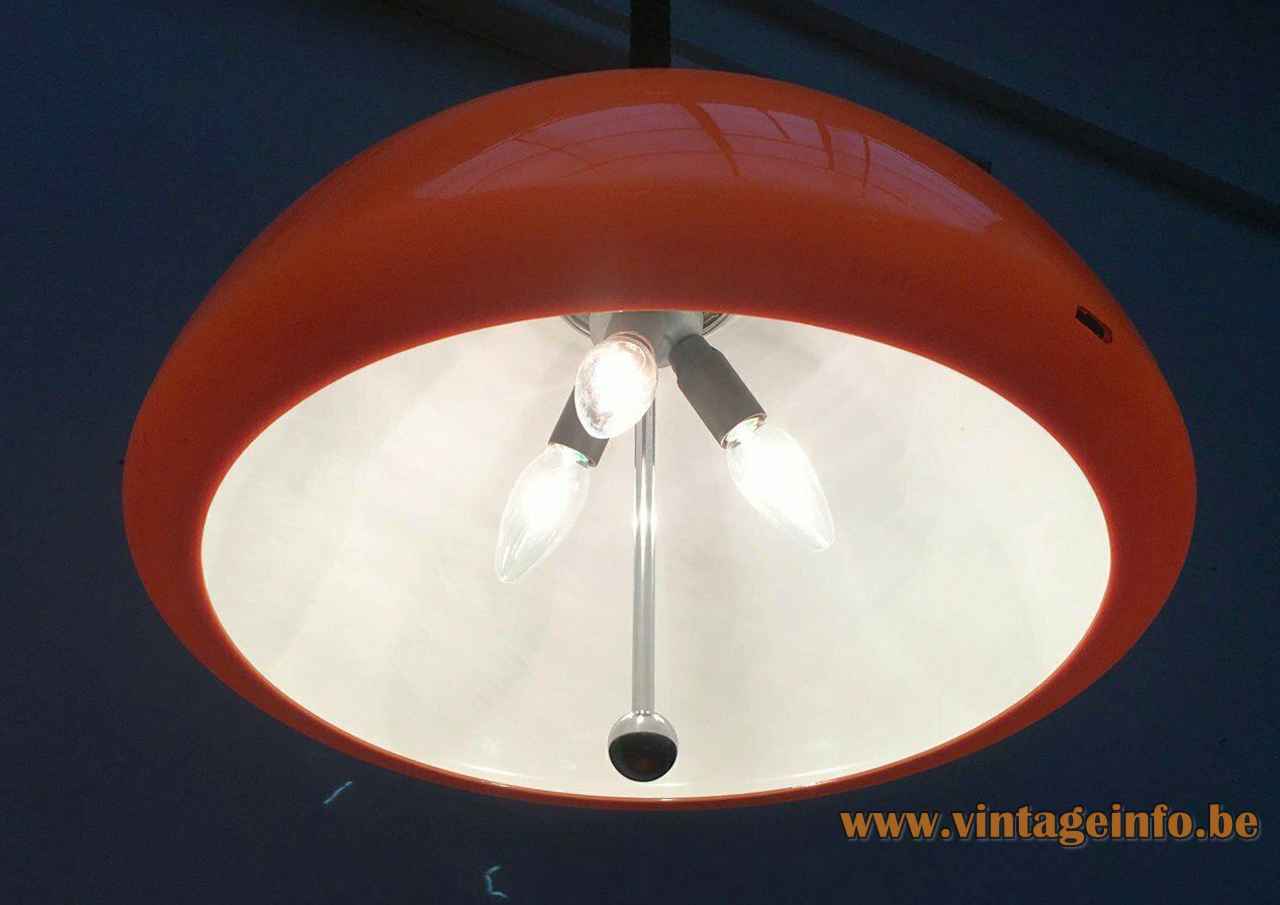 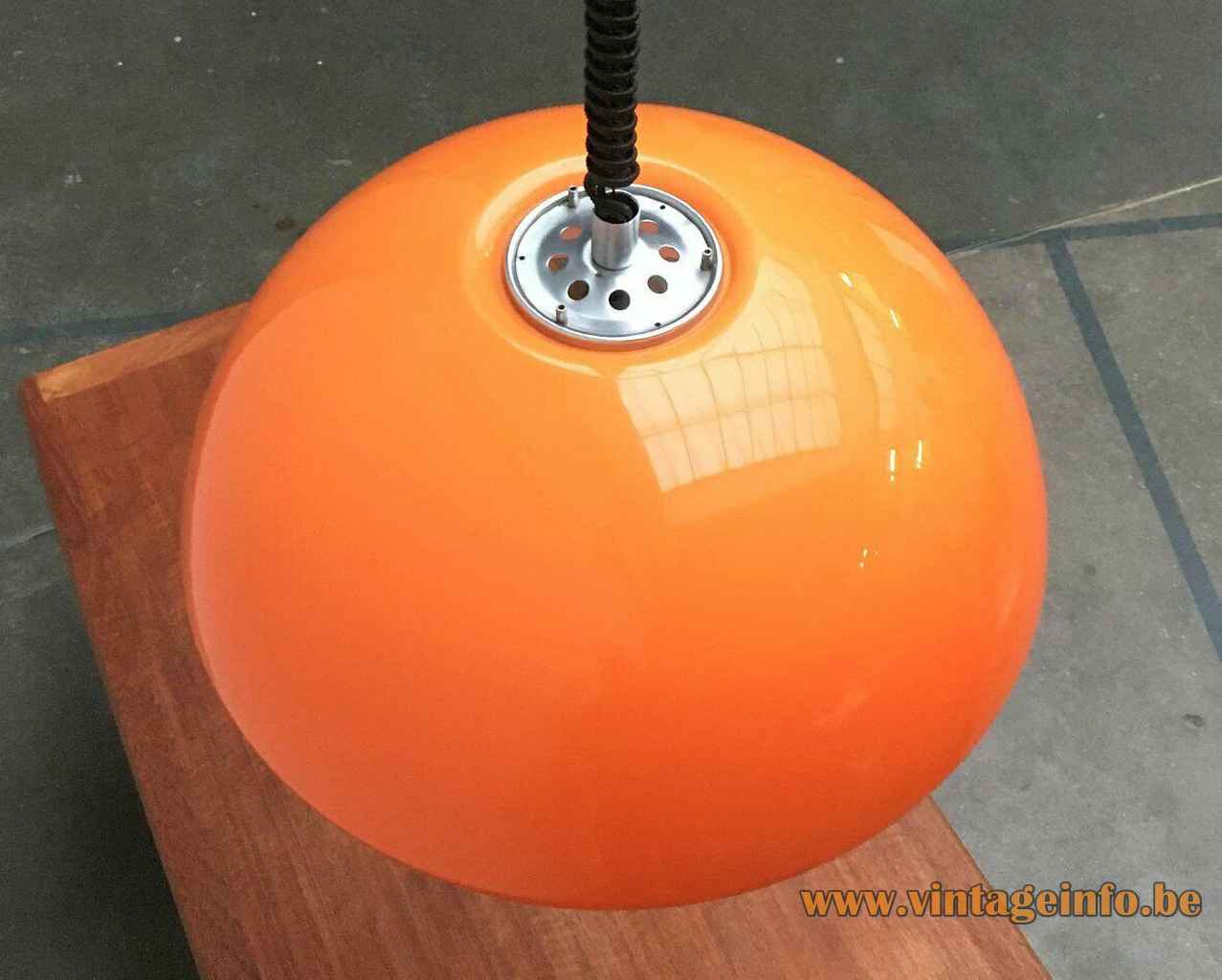 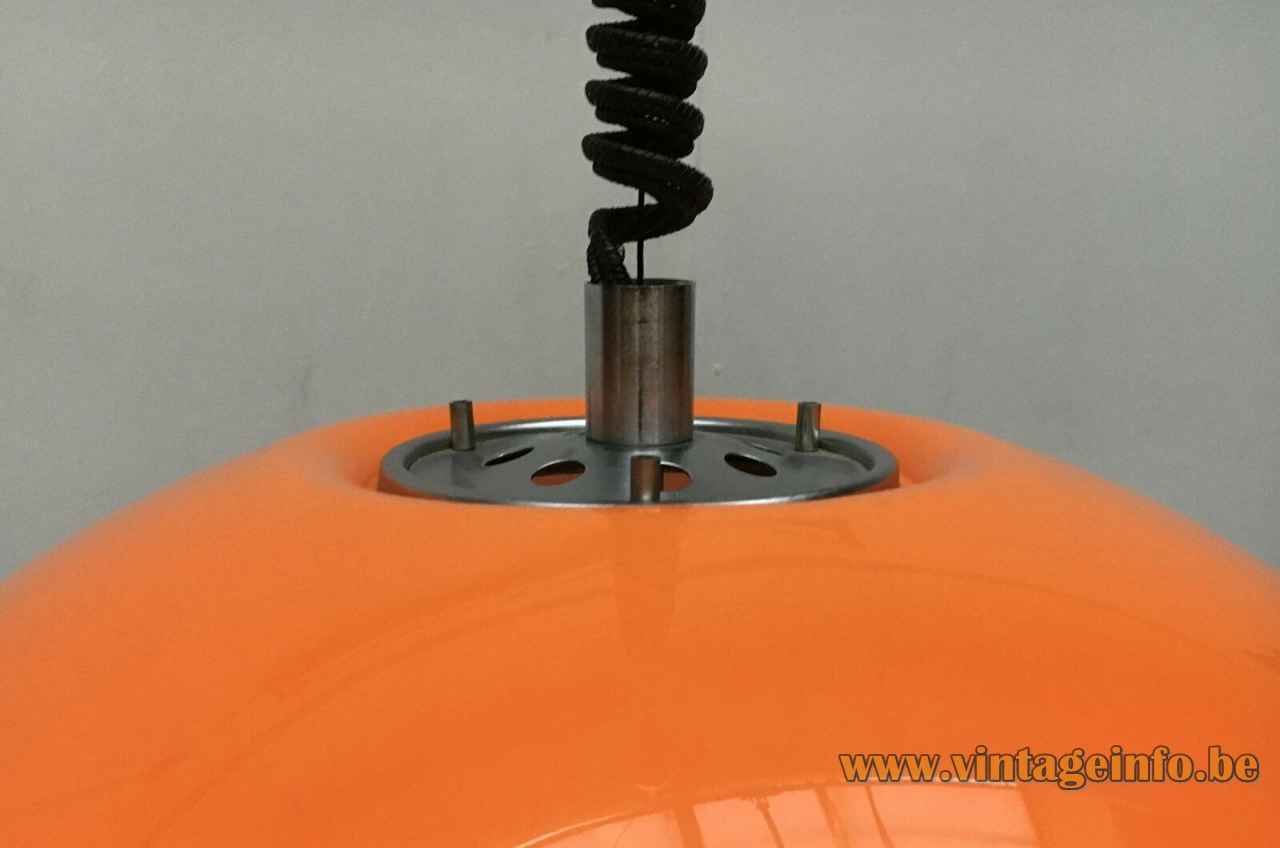 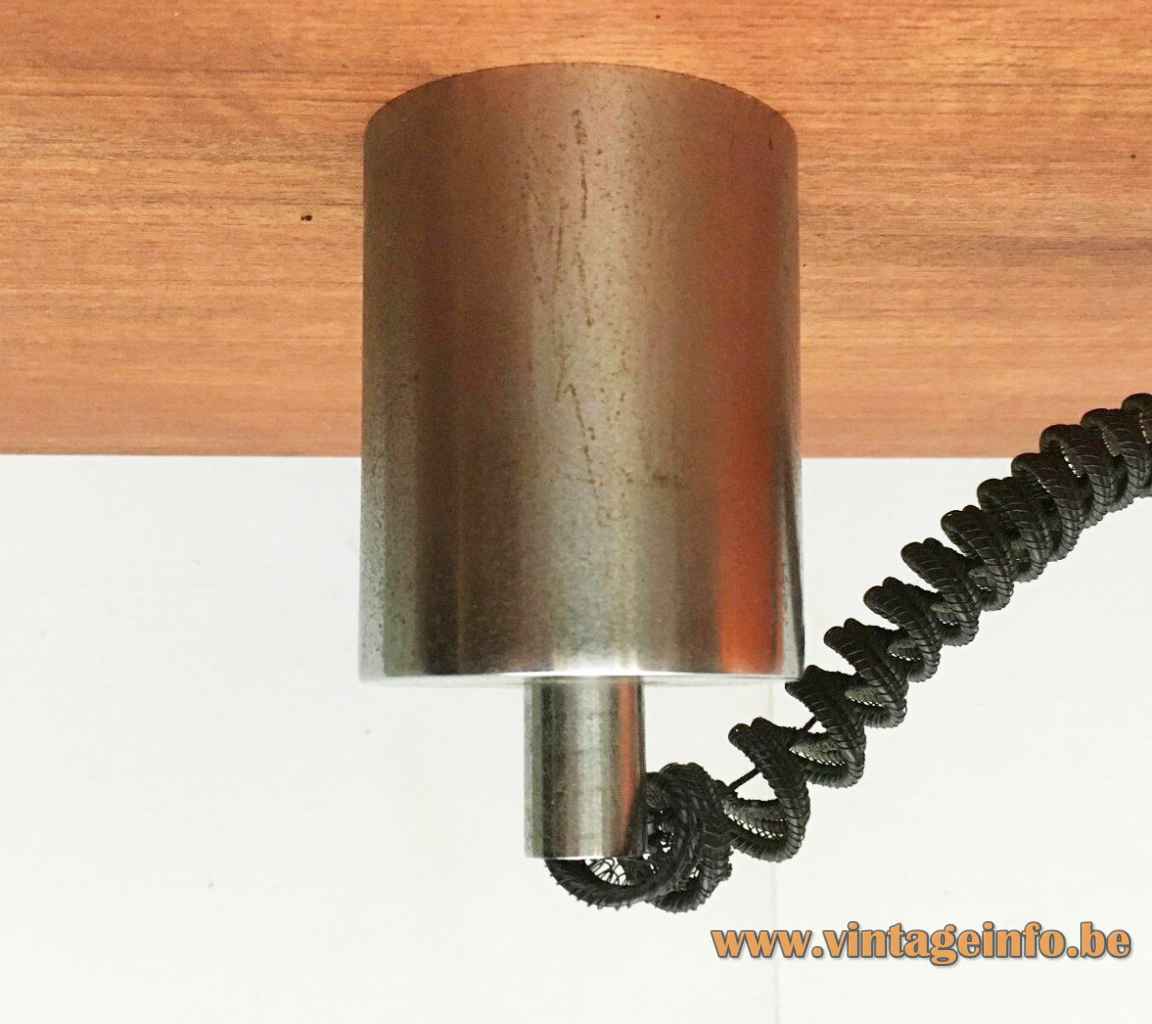 A Harvey Guzzini Cabras pendant lamp was used as a prop in the 2020 French action film Bronx (Rogue City). Starring: Lannick Gautry, Stanislas Merhar and Kaaris. It is a white version without the rise & fall mechanism.

Materials: Round orange acrylic mushroom lampshade, white on the inside. Chrome rod and ball. Some chrome and metal parts. Chrome canopy. 3 Bakelite sockets.

Other versions: This Harvey Guzzini Cabras pendant lamp is made in several colours: white, brown, orange and yellow, according to the catalogue of 1974. Model number: 3020. Lamps with different handles were also produced.

The Cabras was also made without the handle, and without the rise & fall mechanism, as you can see in the movie. The Cabras pendant lamp uses the same lampshade as the Toledo table lamp. You can find it over here. A pendant lamp with a ribbed lampshade was made in the 70s. It is model 3086.

Cabras is a commune in Sardinia.

The lampshade of the Harvey Guzzini Cabras pendant lamp is slightly degrading orange (light to dark orange) on the outside, complete white on the inside. Harvey Guzzini wanted to create the incamiciato effect, the same way many Murano glass lamps are made. It is made this way to give white light below and to distribute the light evenly.

The Cabras was named Iva by MEBLO.

In 1962, Luigi Massoni meets the brothers Raimondo, Giovanni and Giuseppe Guzzini in Milan: it is the beginning of a fruitful collaboration. He worked for Fratelli Guzzini and Harvey Guzzini, what later changed in iGuzzini, until 1976. Not only he was the art director but the coordinator of communication and advertising campaign, bringing, as pointed out by Adolfo Guzzini “a purification of the form” and “rationality as a new social status “. He also designed the logo of Harvey Guzzini as you can see below.
Luigi Massoni designed some of the most beautiful lamps for Harvey Guzzini, such as the Brumbry, the Alvise, the Moana, the Medusa and the Toledo.