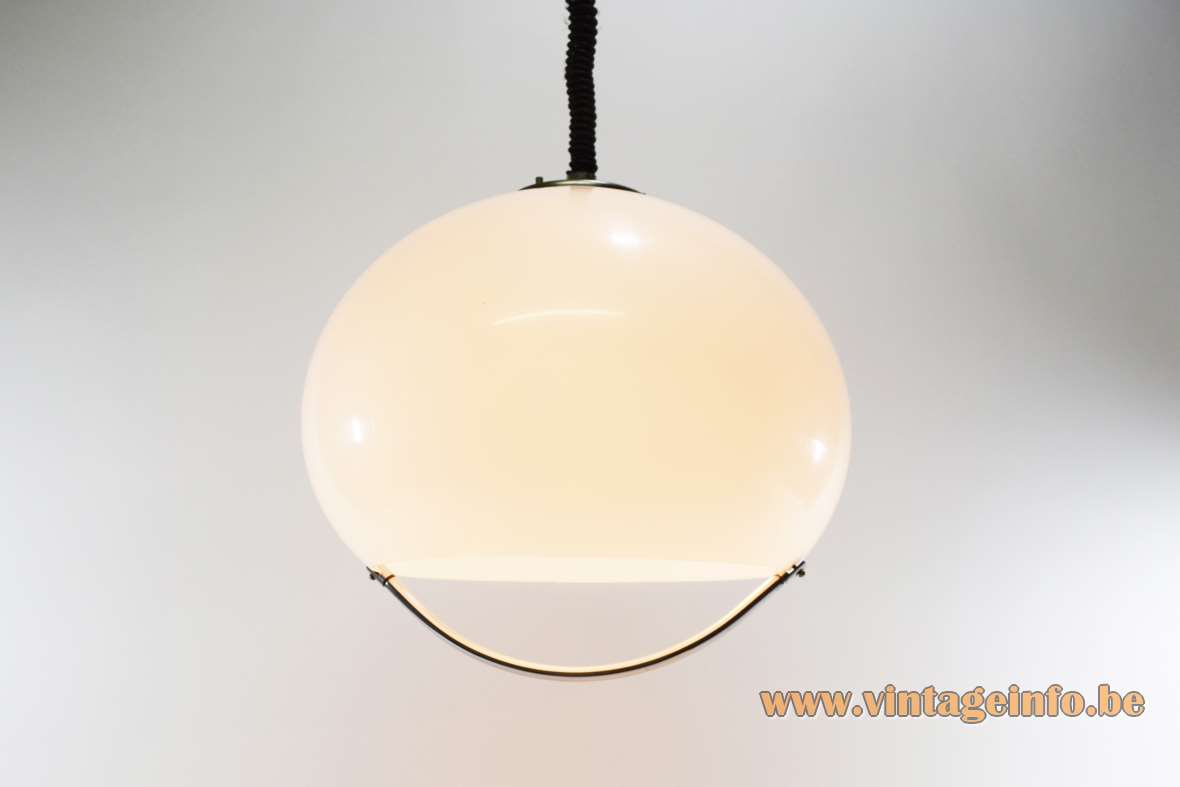 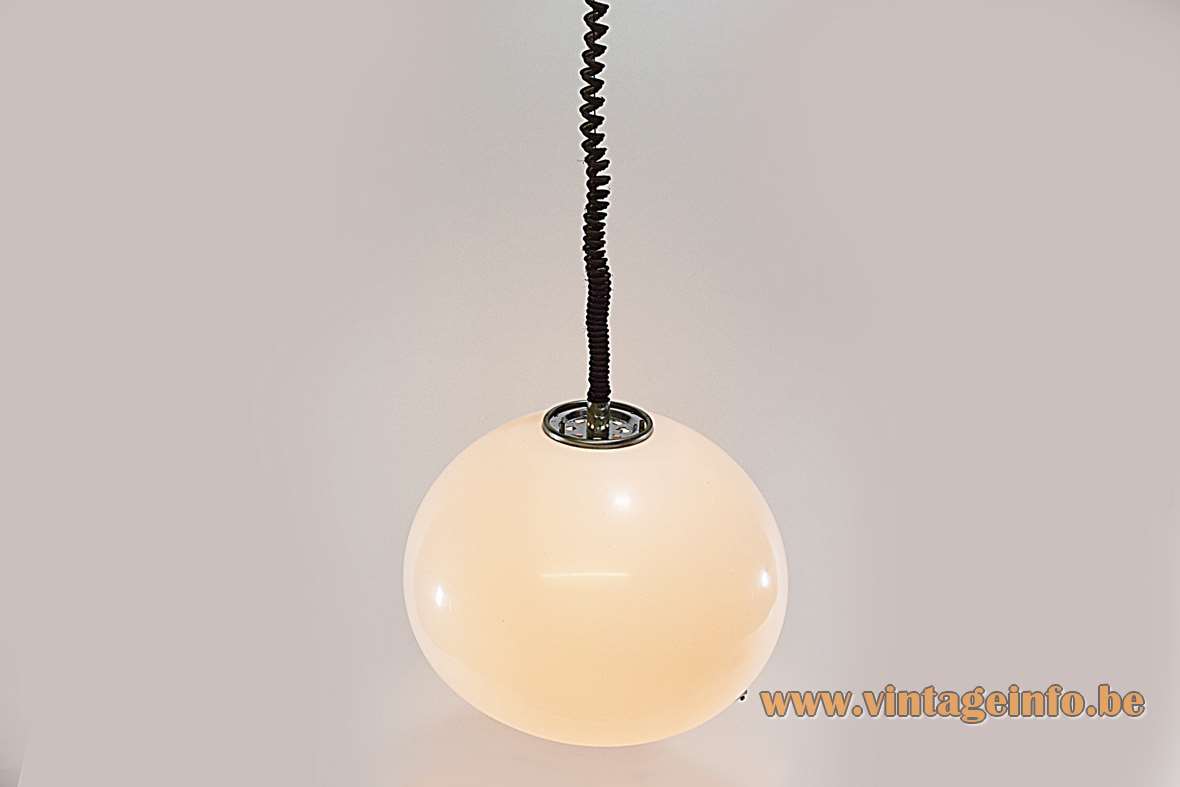 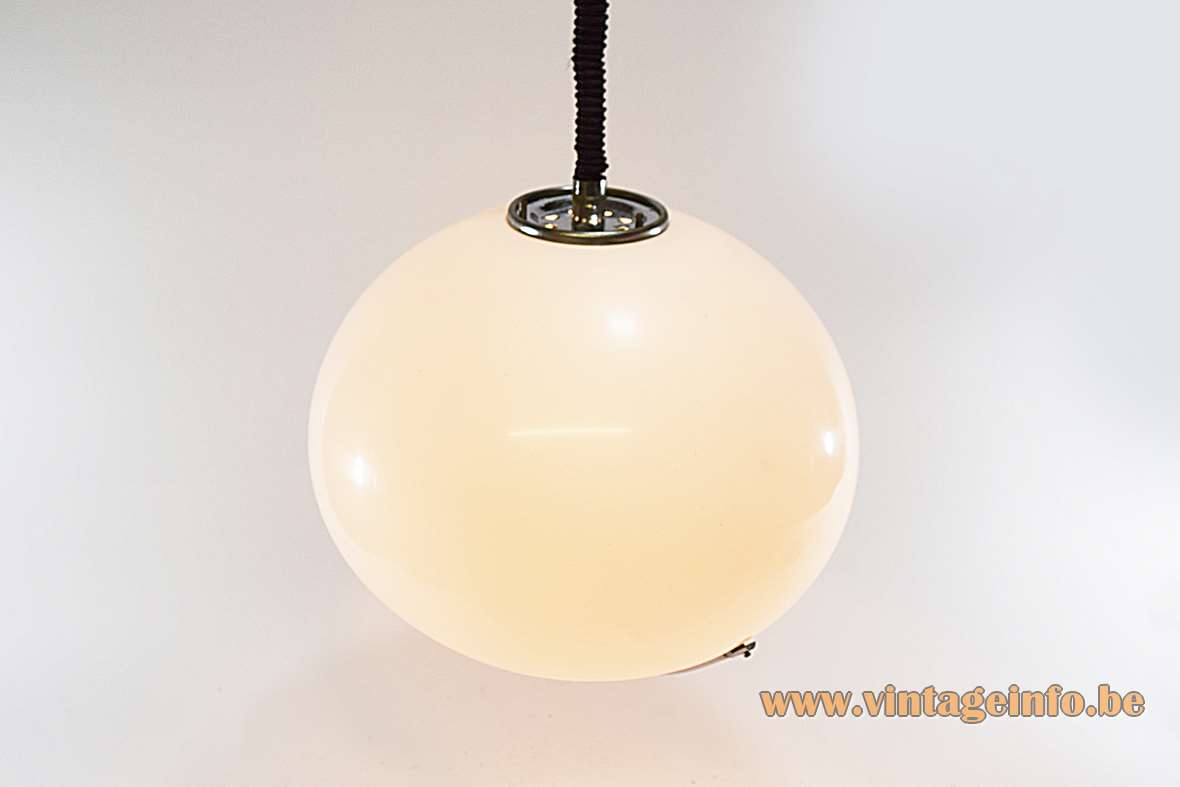 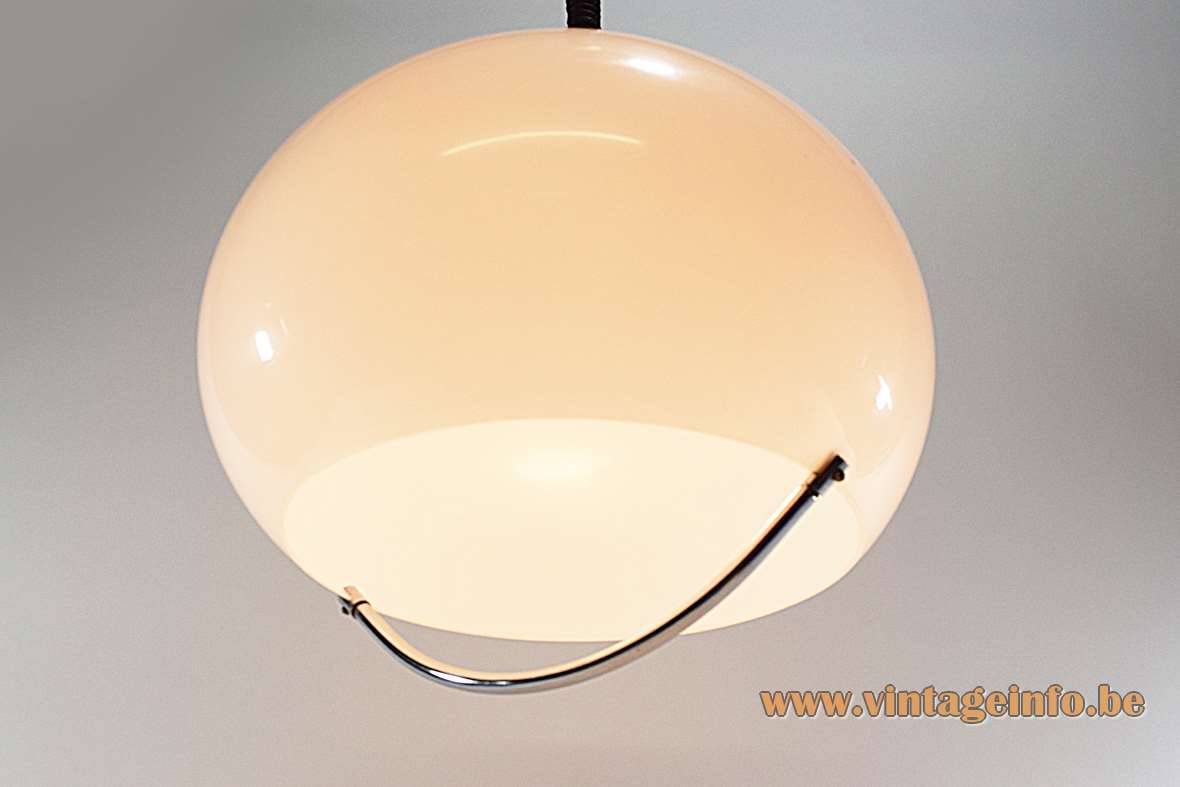 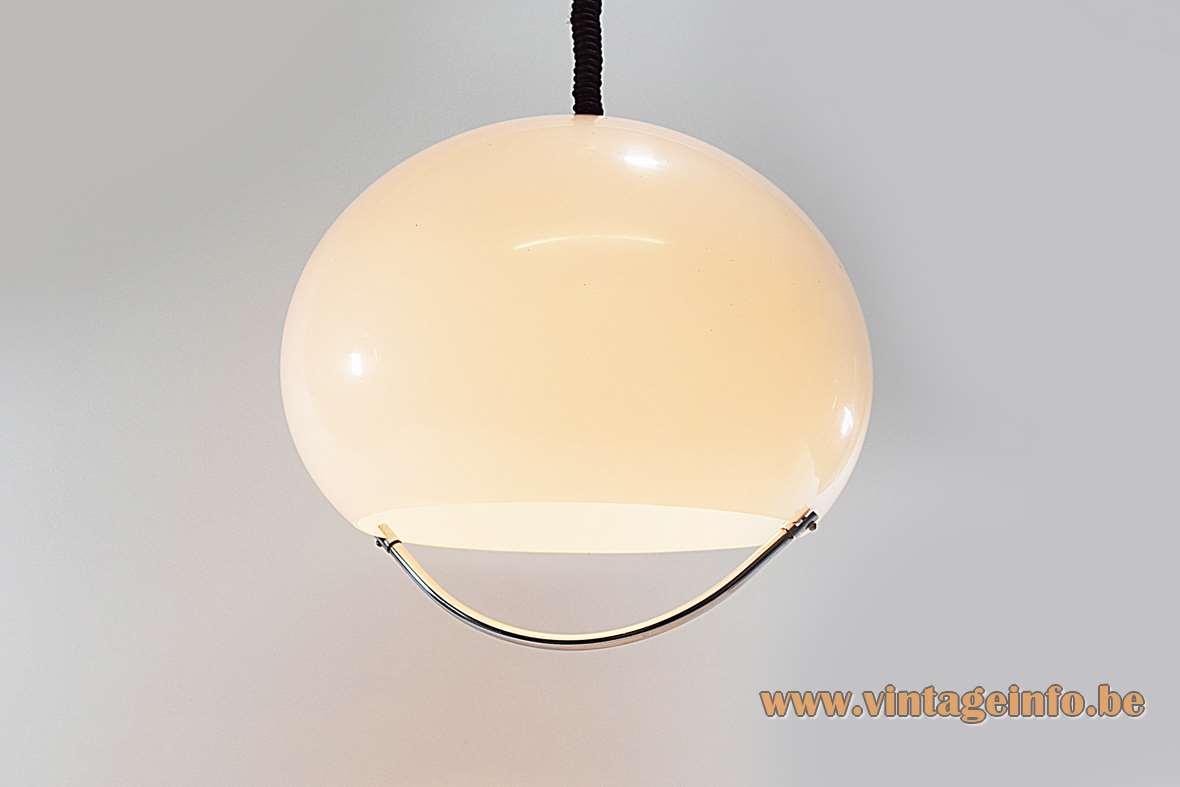 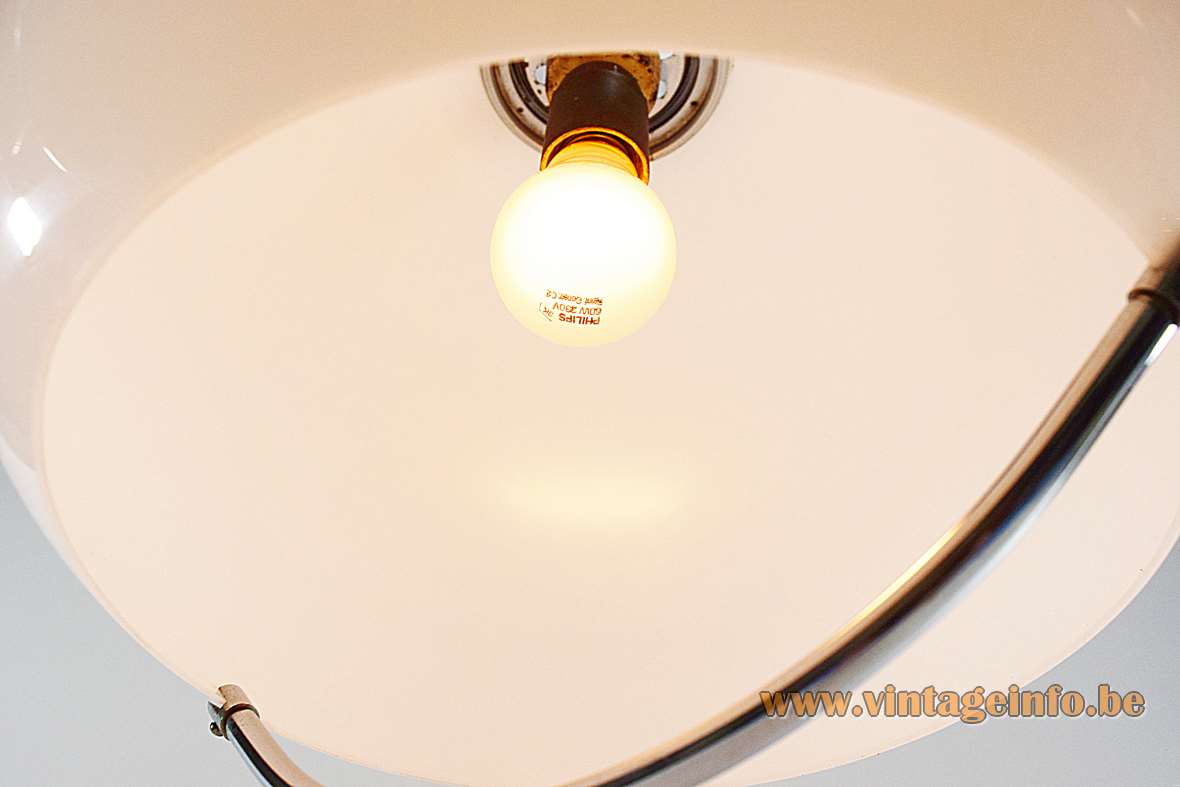 A Harvey Guzzini pendant lamp Jolly was used as a prop in the 1978 British film The Playbirds. Starring  Mary Millington, Alan Lake and Glynn Edwards. 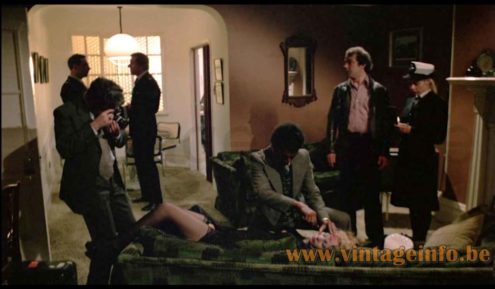 Other versions: Also made in a big version 46 cm / 18.11”. The Jolly pendant lamp is always provided with a chrome handle and a rise & fall mechanism by Rolly.

The Harvey Guzzini pendant lamp Jolly without the handle is exactly the same, but was never sold as Jolly. It has no name, only a number.

Also a version with a white diffuser inside was also made as you can see in the picture of the film Le Premier Jour du Reste de Ta Vie.

Colours: White, gradient brown, green, red, orange. Over the years some other colours were also produced. The small version was in production until 1976. The big version until 1981.

The date on the Rolly rise and fall mechanism says: 1972. Rolly is an Italian company that produced rise & fall mechanisms for many lamp producers around the world in the 1960s, 1970s and 1980s.

In 1962, Luigi Massoni meets the brothers Raimondo, Giovanni and Giuseppe Guzzini in Milan: it is the beginning of a fruitful collaboration. He worked for Fratelli Guzzini and Harvey Guzzini, what later changed in iGuzzini, until 1976. Not only he was the art director but the coordinator of communication and advertising campaign, bringing, as pointed out by Adolfo Guzzini “a purification of the form” and “rationality as a new social status “. He also designed the logo of Harvey Guzzini as you can see below.

Luigi Massoni designed some of the most beautiful lights for Harvey Guzzini, such as the Brumbry, the Alvise, the Toledo and the lamp set Moana and these pendant lamps named Jolly.

iGuzzini illuminazione was established in June 1958 by Raimondo Guzzini (born 1928) under the name Harvey. Harvey is derived from the famous movie ‘Harvey’ with James Stuart and the invisible rabbit Harvey from 1950.
The initial production of enameled copper objects was supplemented by decorative luminaires.

Big version of the Jolly