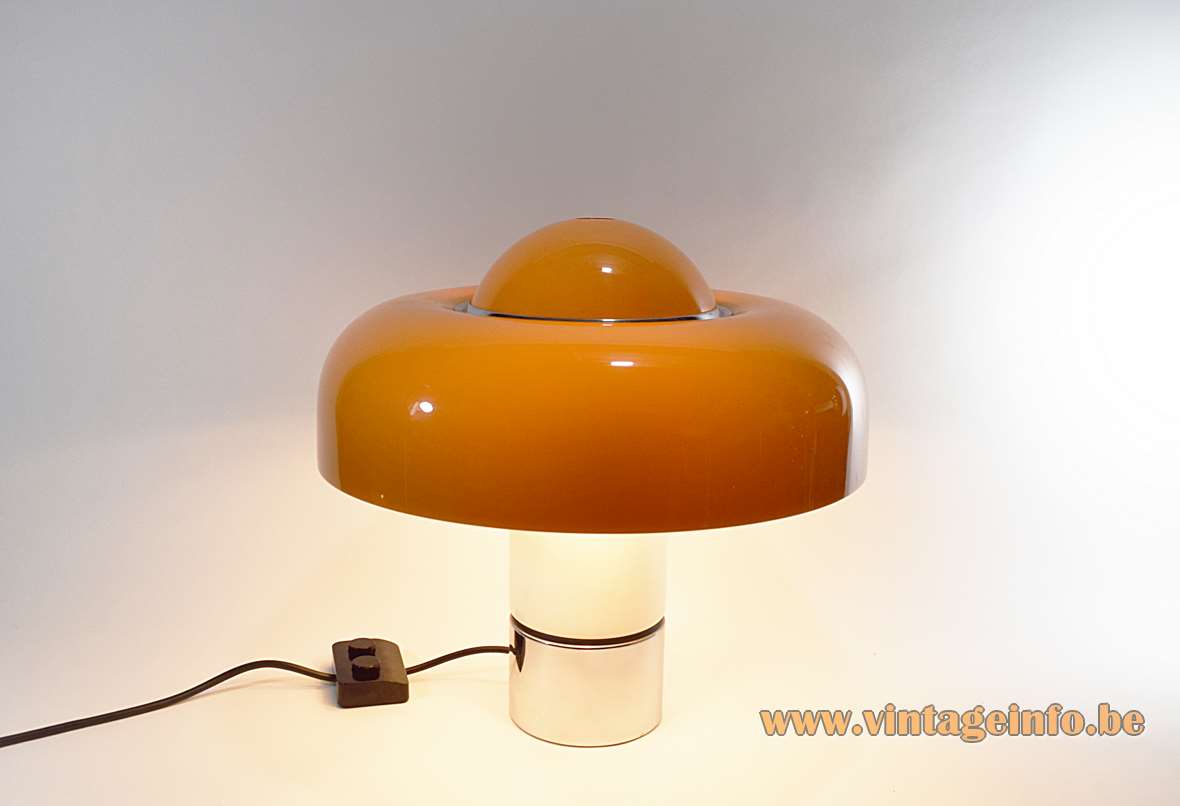 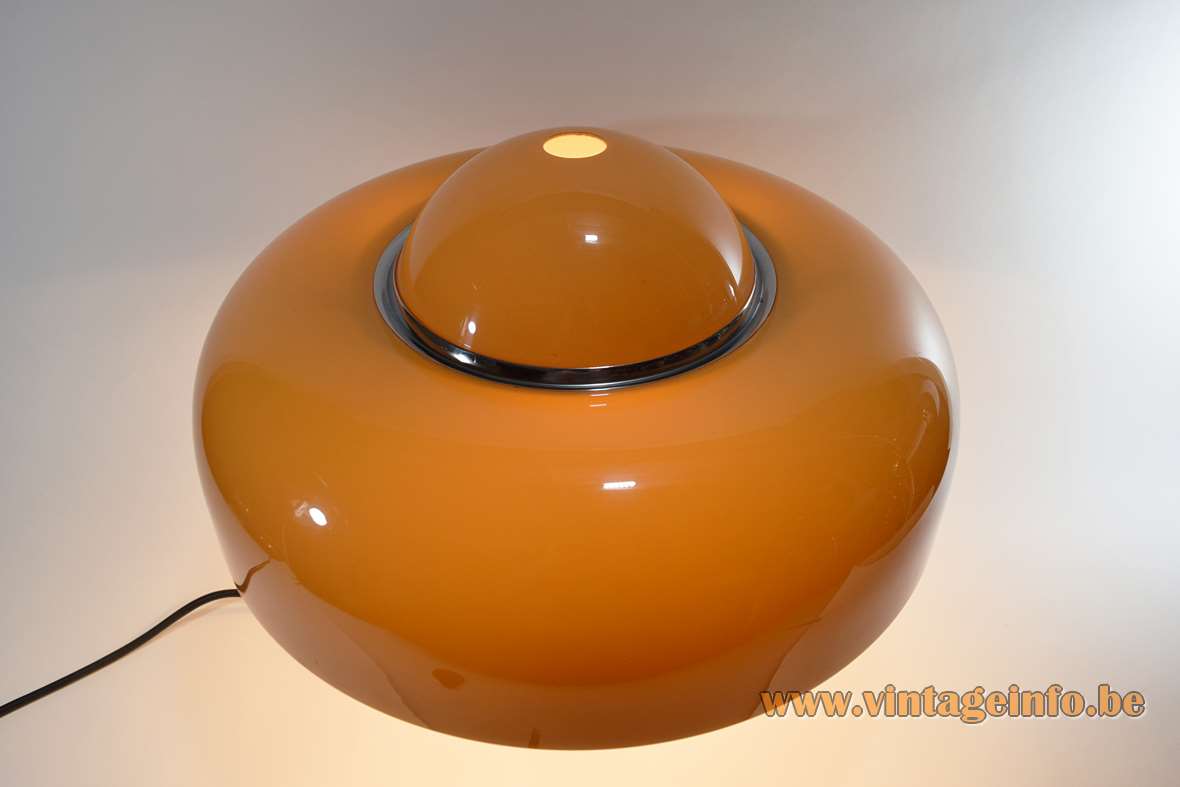 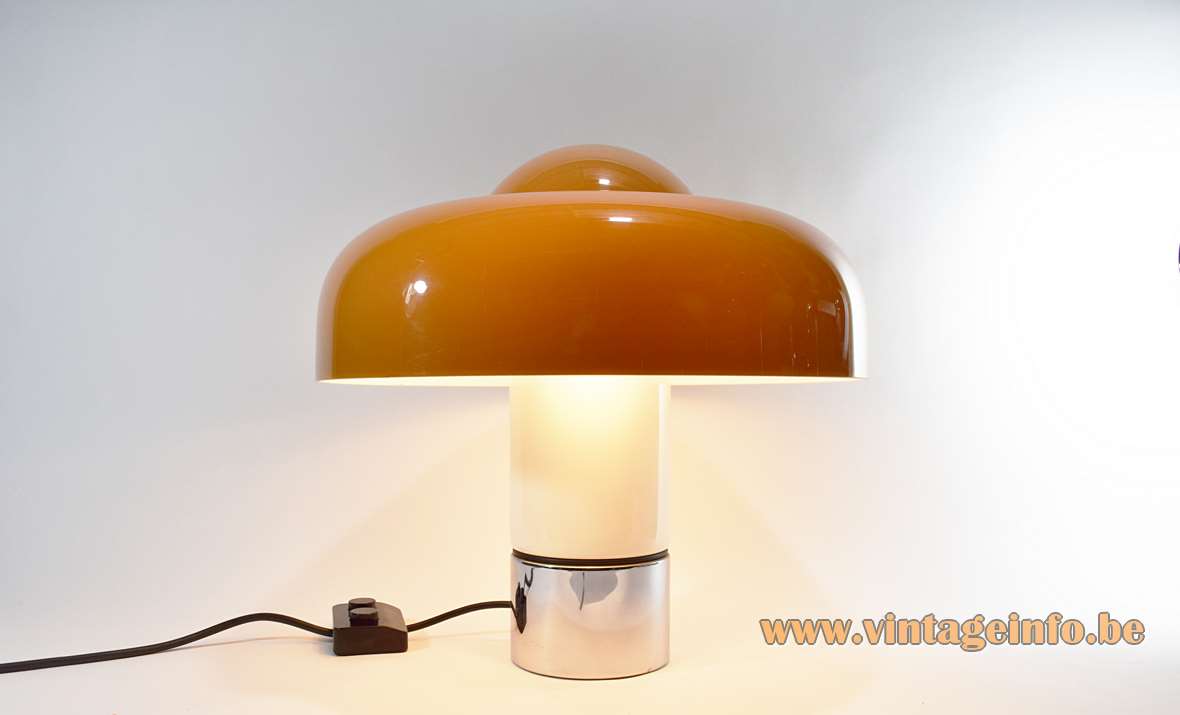 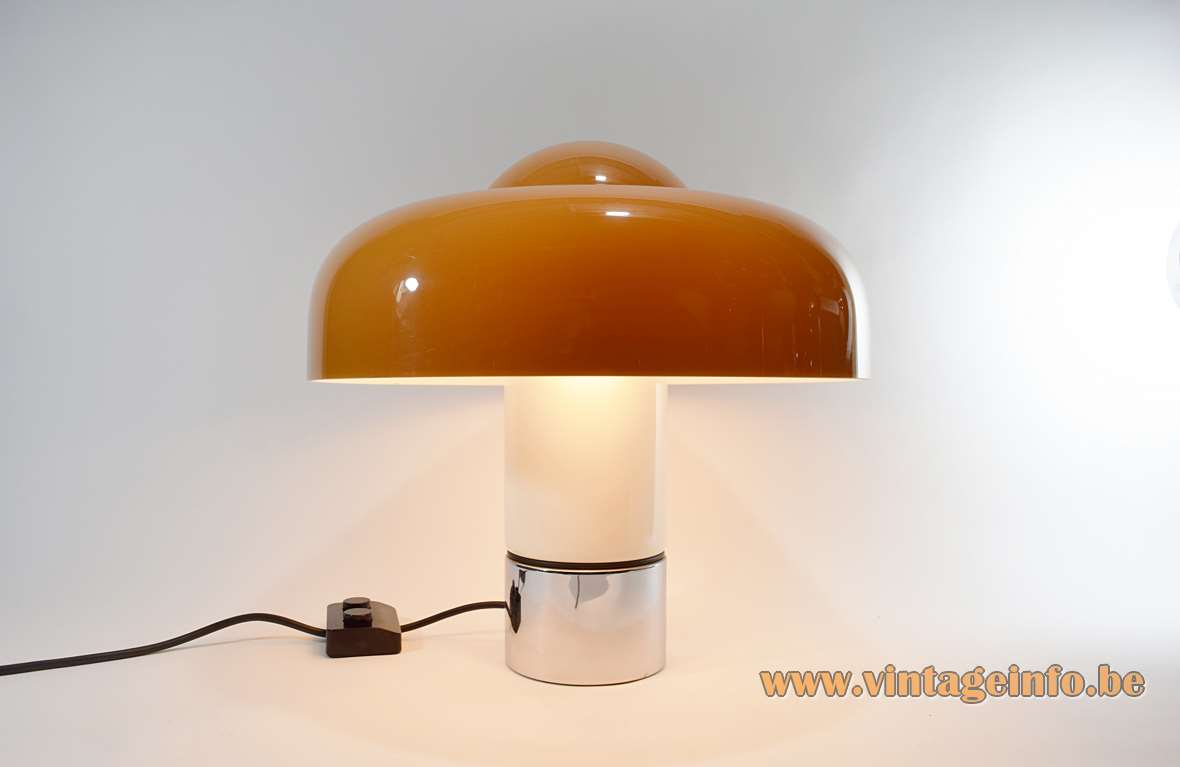 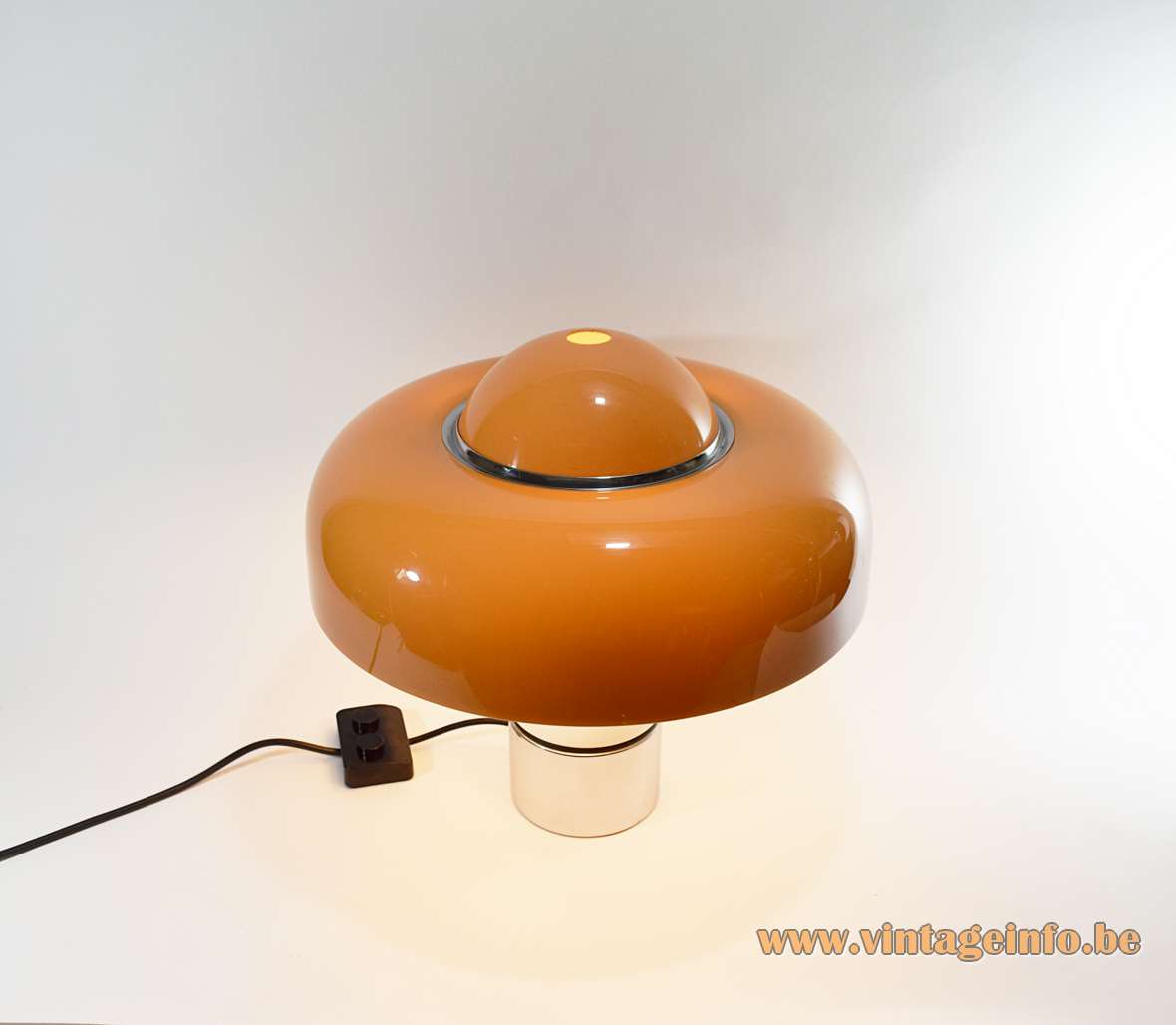 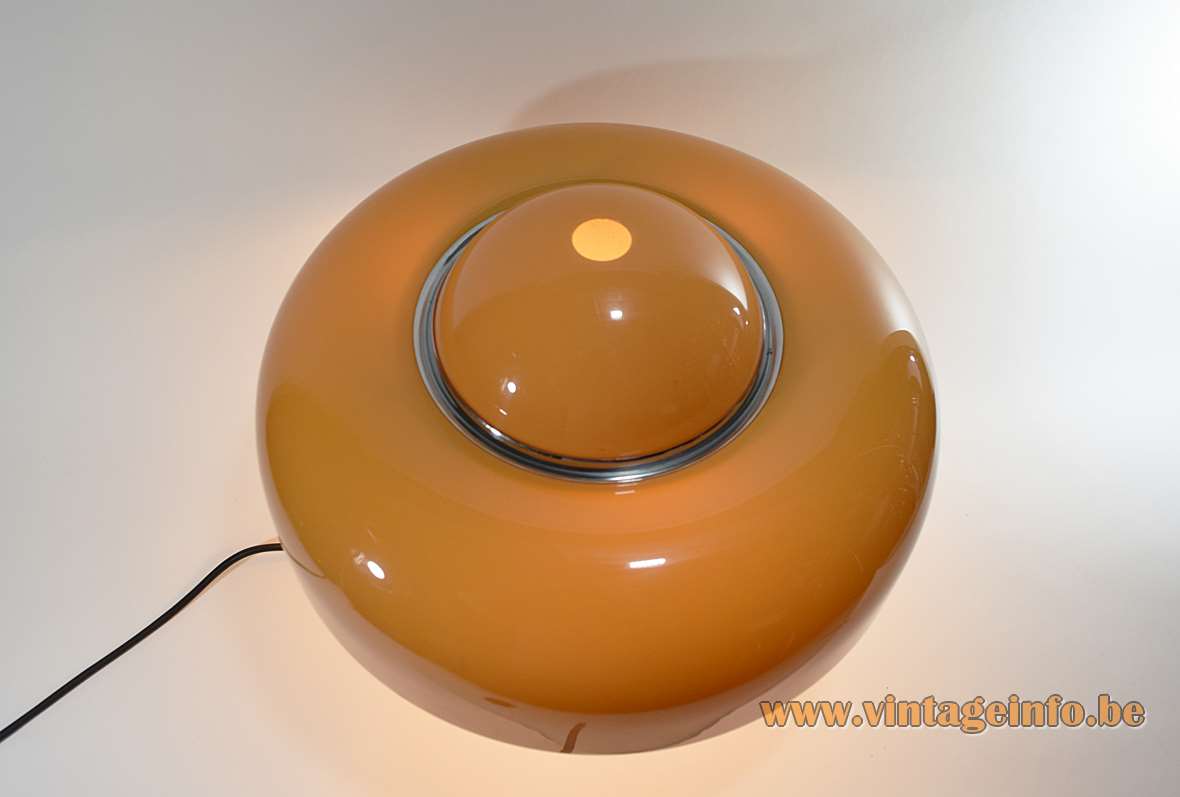 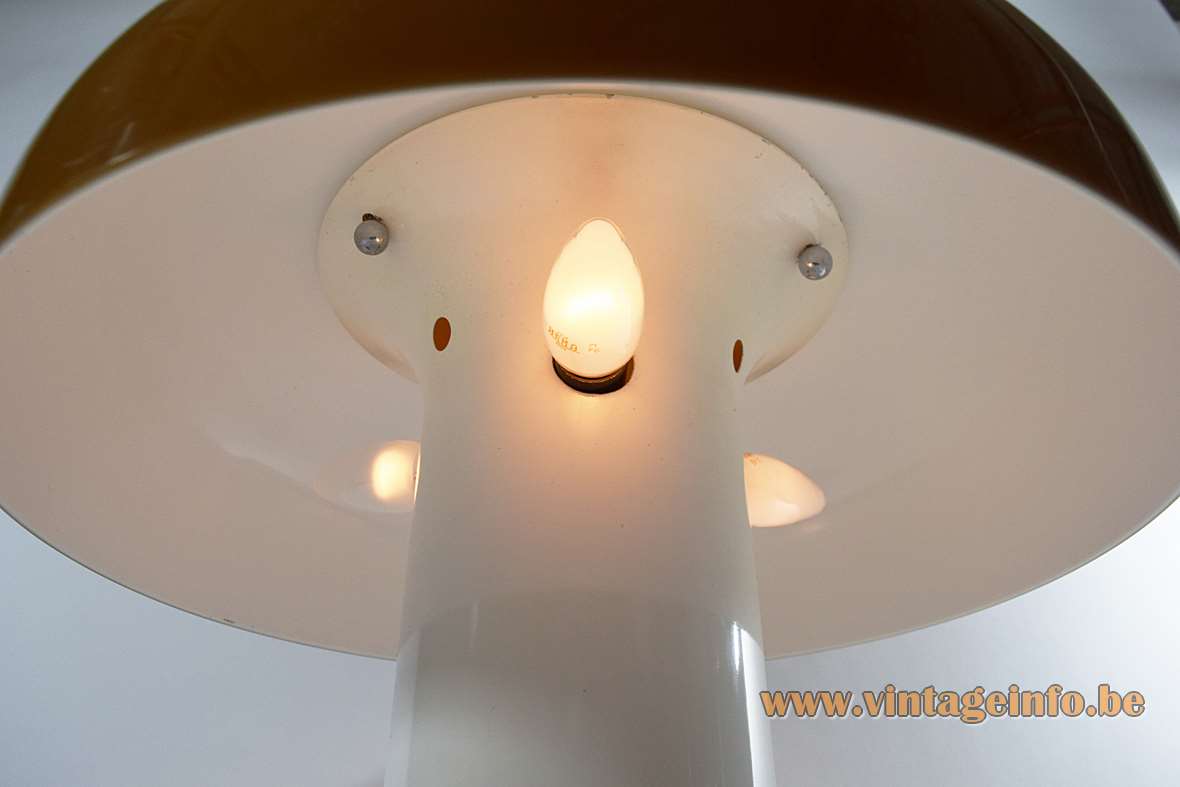 Below an edition from around 1980 with a different shade; one of the examples for combining translucent and white, also used for the Baobab (1978-1992) in black and white. 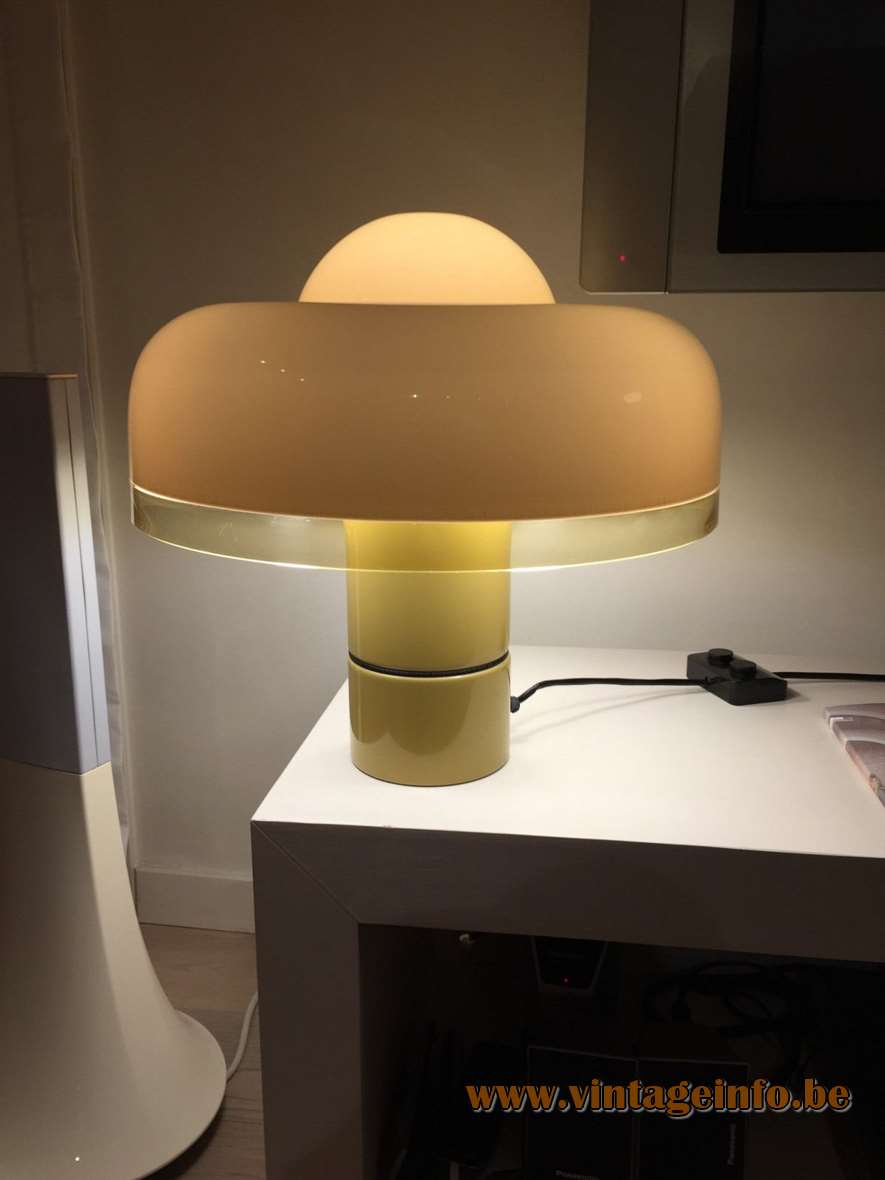 A Harvey Guzzini Brumbry table lamp was used as a prop in the 2010 British film “Made In Dagenham“, a dramatization of the 1968 strike at the Ford car plant in the city of Dagenham, where female workers walked out in protest against sexual discrimination. This scene is in the headquarters of Ford in Michigan, USA. A little mistake, because the Brumbry went in production in 1969…

A Harvey Guzzini Brumbry table lamp was used as a prop in the French mini series Paris (2015-2016) in the official residence of the French prime minister. 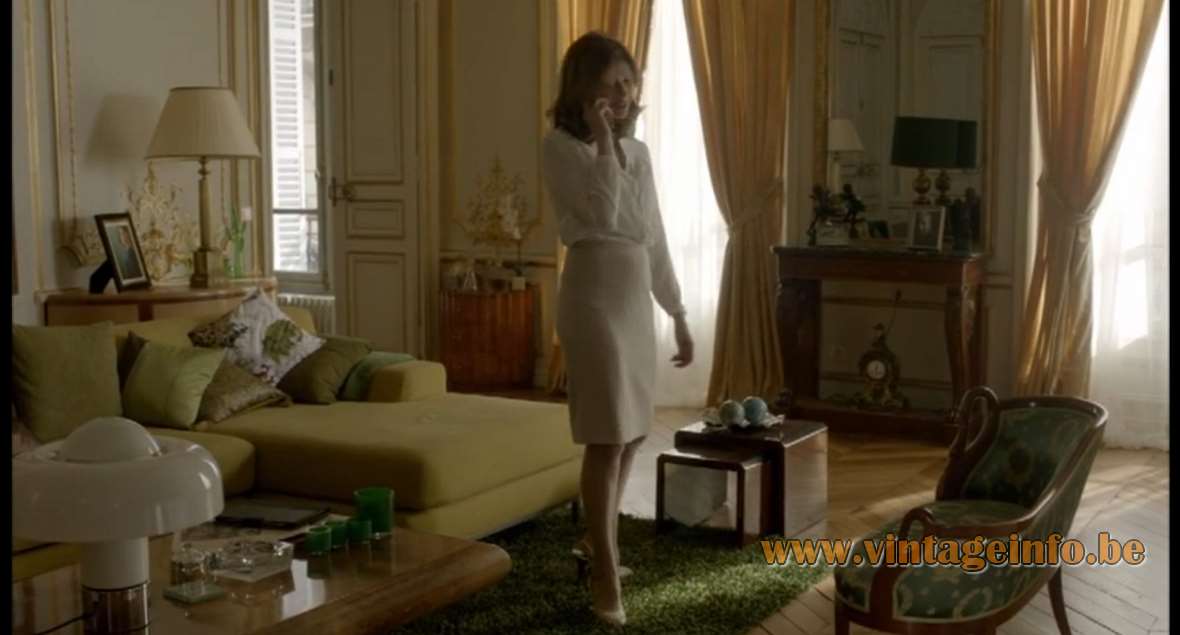 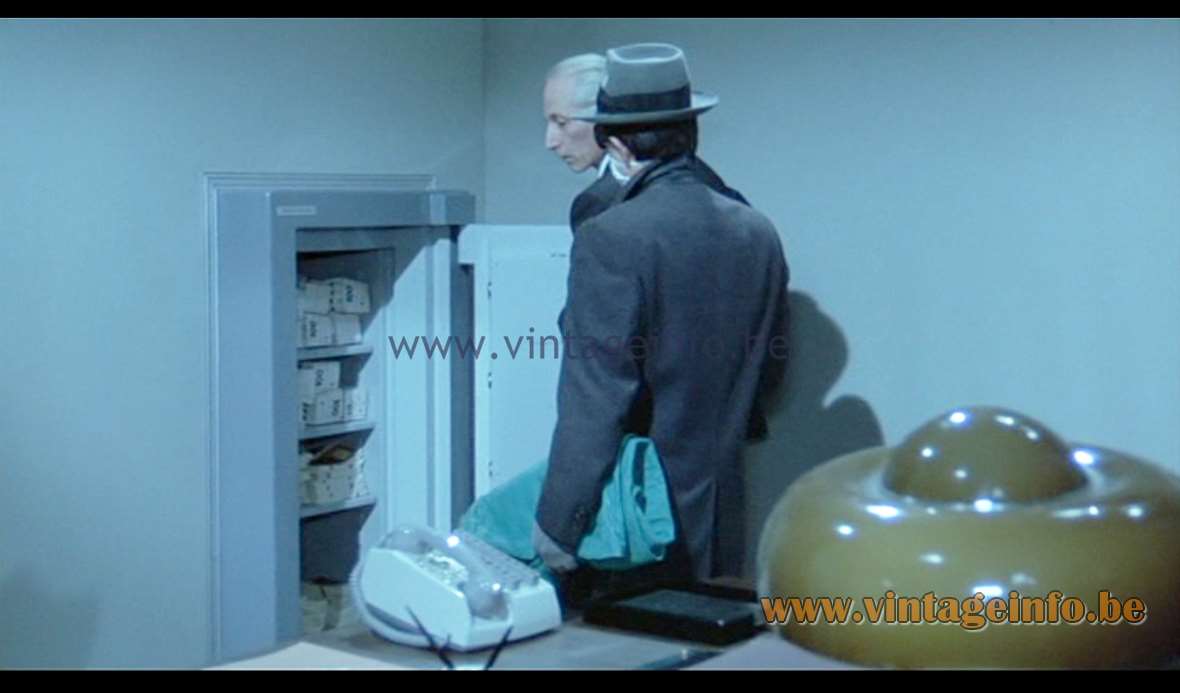 A Harvey Guzzini Brumbry table lamp was used as a prop in the 2016 French thriller drama film Iris (In the Shadow of Iris). Starring Romain Duris, Charlotte Le Bon and Jalil Lespert.

Materials: Round chromed metal (iron) base. Black felt on the bottom of the base. Cement counterweight inside the base. Rubber O-ring. White lacquered conical ending tube on top. 3 chrome ball nuts. Acrylic mushroom lampshade. Degrading brown on the outside, white on the inside. Chromed iron ring on top of the lampshade. 4 Bakelite E14 sockets.

Electricity: 4 bulbs E14, 4 x 60 watt maximum, 110/220 volt.
Any type of light bulb with an E14 socket can be used, preferably a white/opaque or frosted light bulb. Clear bulbs create stripes on the lampshade.

The top dome and main lampshade can be switched on independently for up lighting, down lighting or both at once.

Other versions: Made in several colours. White and gradient brown are the two most sold. Also orange/red lamps were made and sometimes you find a green one. Later edtions have a metal base in two pieces as you can see below. You can view a rare edition of the late 1970s on the left of this page.

Luigi Massoni was born in Milan, Italy on January 22nd 1930 and was an architect and designer. For some thirty years, he has also worked as a freelance journalist and editor. He lived in Recanati, near Milan where he died in 2013.

In 1962, Luigi Massoni meets the brothers Raimondo, Giovanni and Giuseppe Guzzini in Milan: it is the beginning of a fruitful collaboration. He worked for Fratelli Guzzini and Harvey Guzzini, what later changed in iGuzzini, until 1976. Not only he was the art director but the coordinator of communication and advertising campaign, bringing, as pointed out by Adolfo Guzzini “a purification of the form” and “rationality as a new social status “. He also designed the logo of Harvey Guzzini as you can see below.
Luigi Massoni designed some of the most beautiful lights for the company, such as the Alvise, the Moana, the Toledo and this table lamp, the Brumbry. 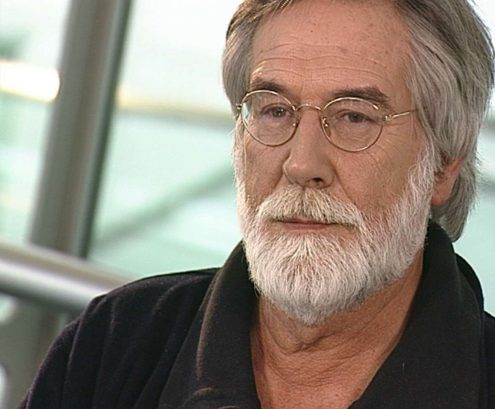 First editions have a different base, the white painted metal is made in 1 piece 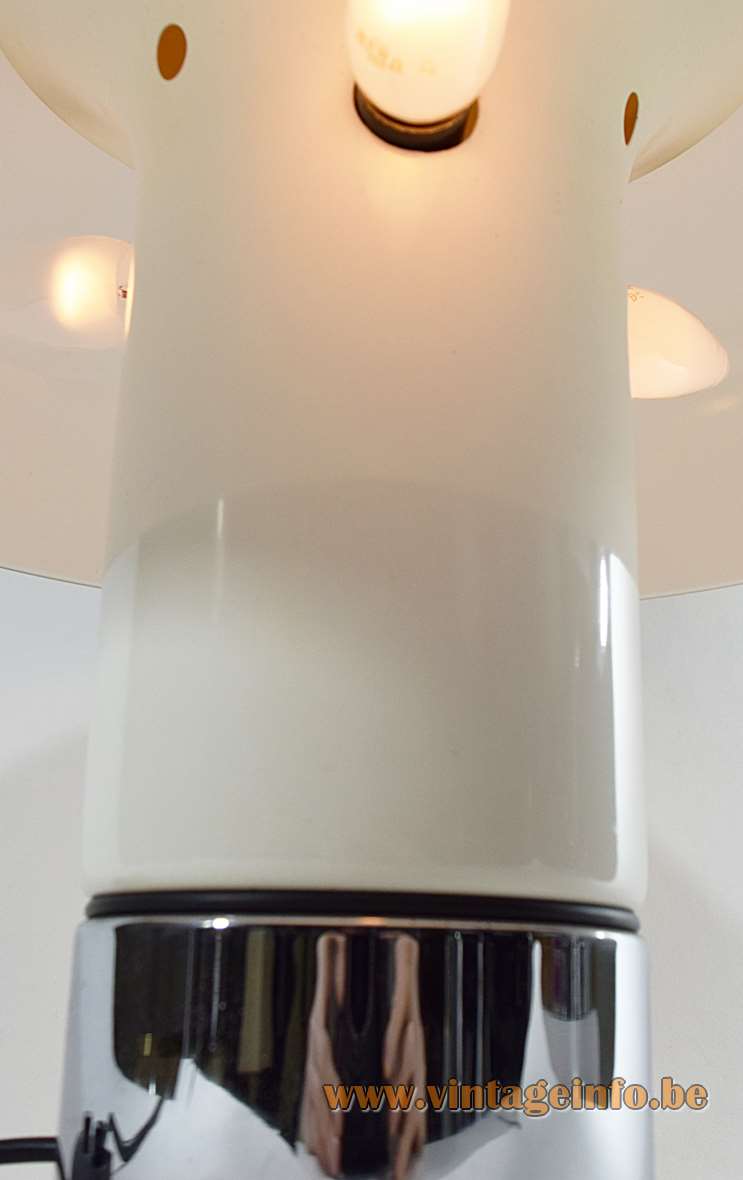 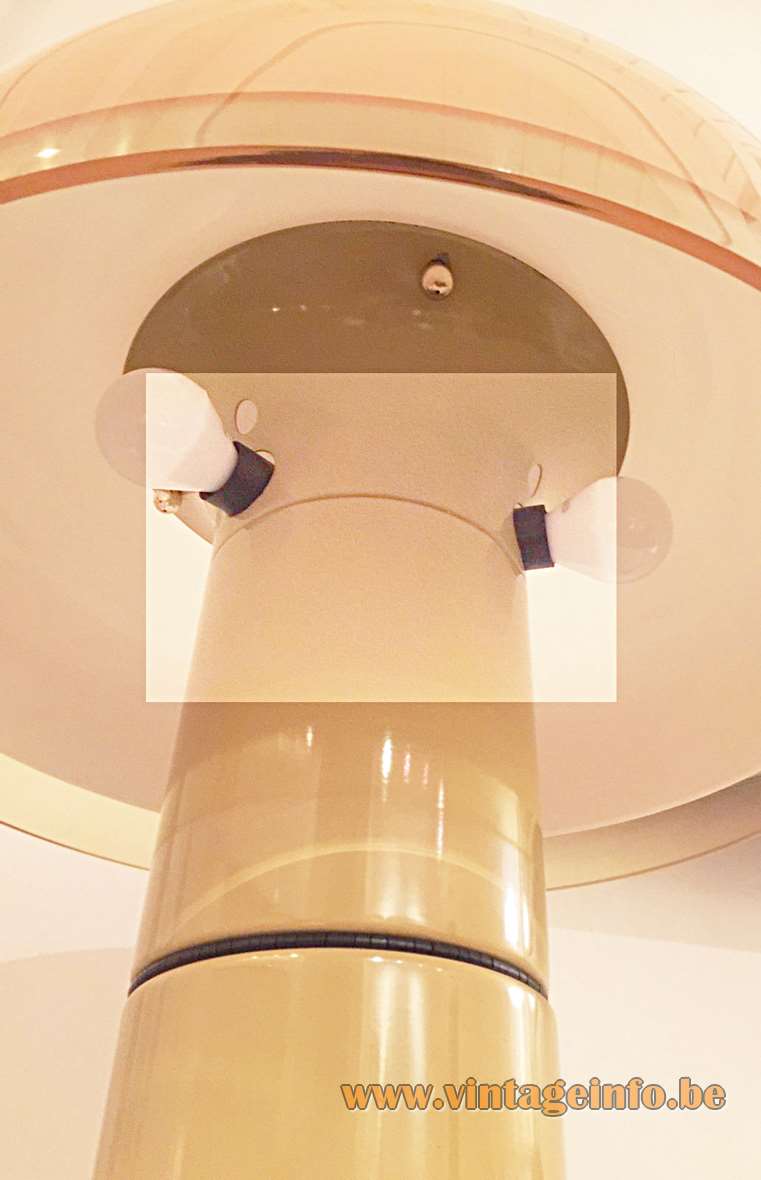 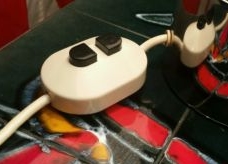 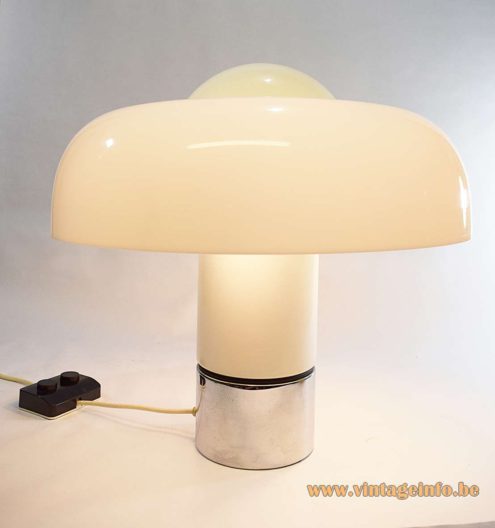 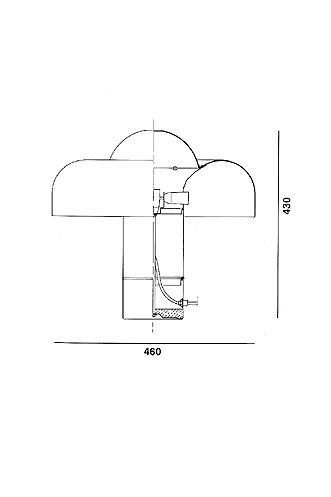 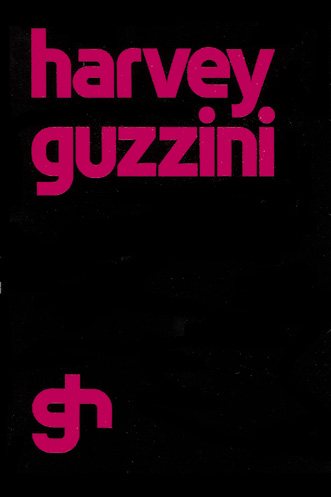 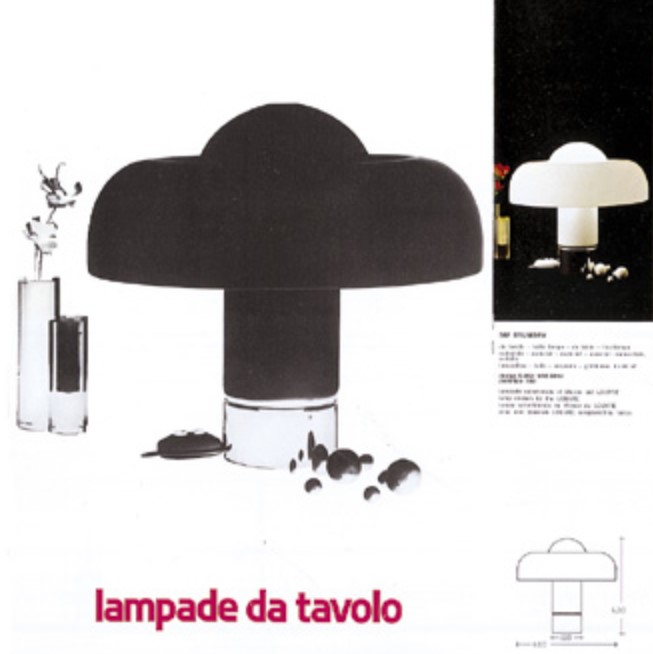 The double single pole foot switch model D-662 from VLM is designed by Achille Castiglioni in 1968 and is still in production (2019). 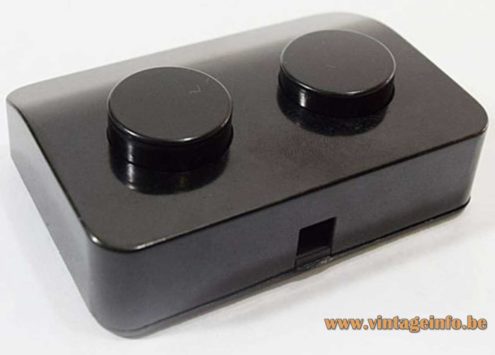 Made In Dagenham – Wikipedia

Made In Dagenham – IMDb