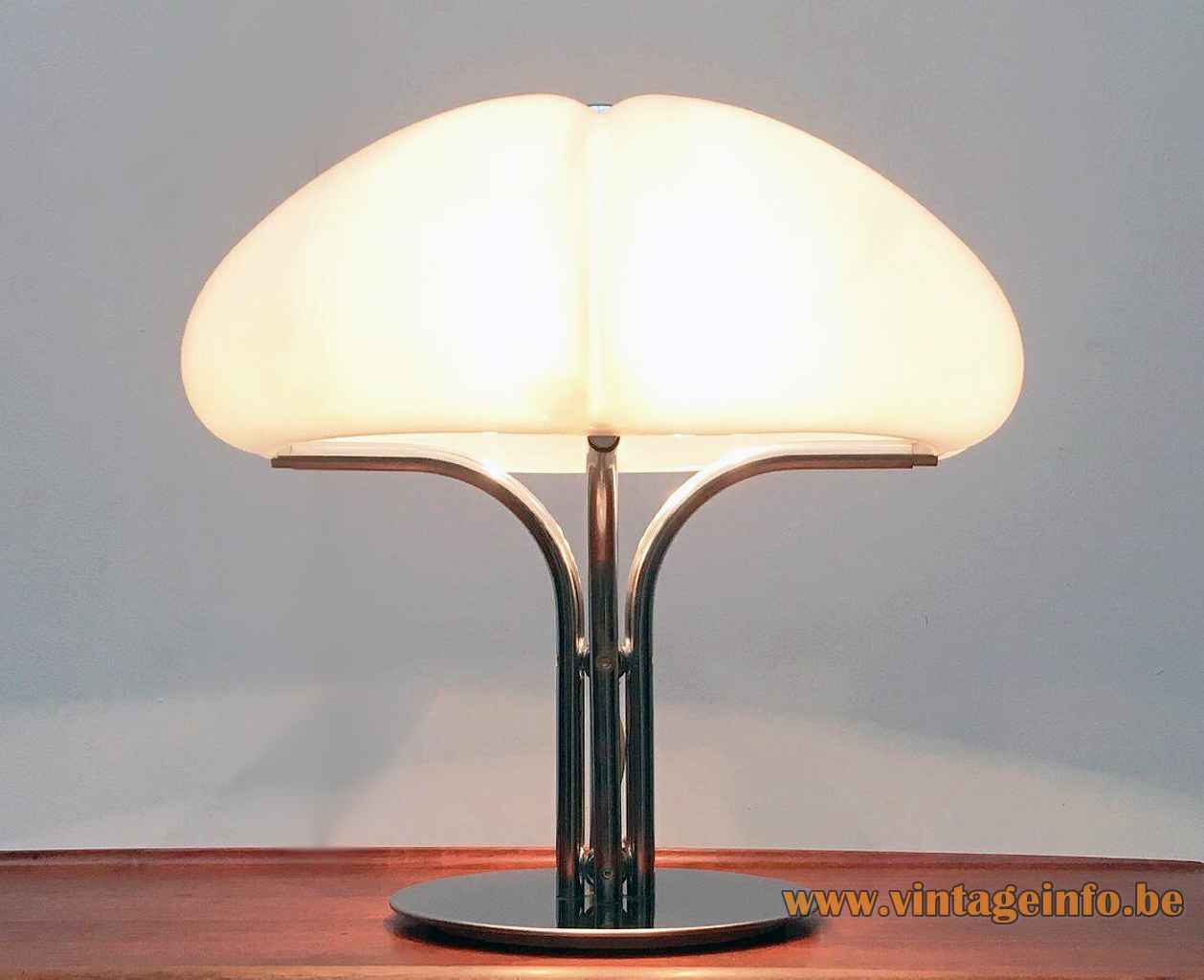 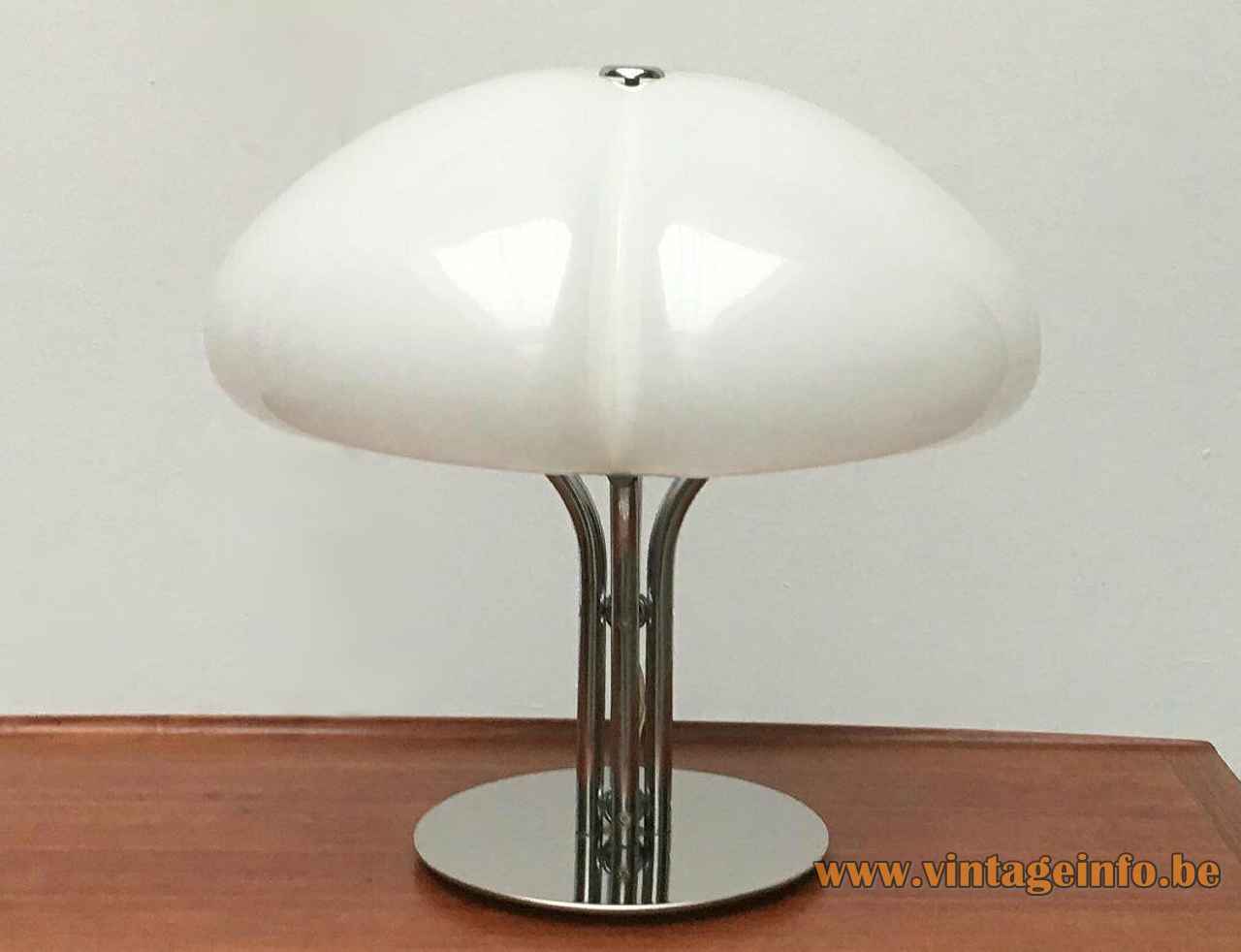 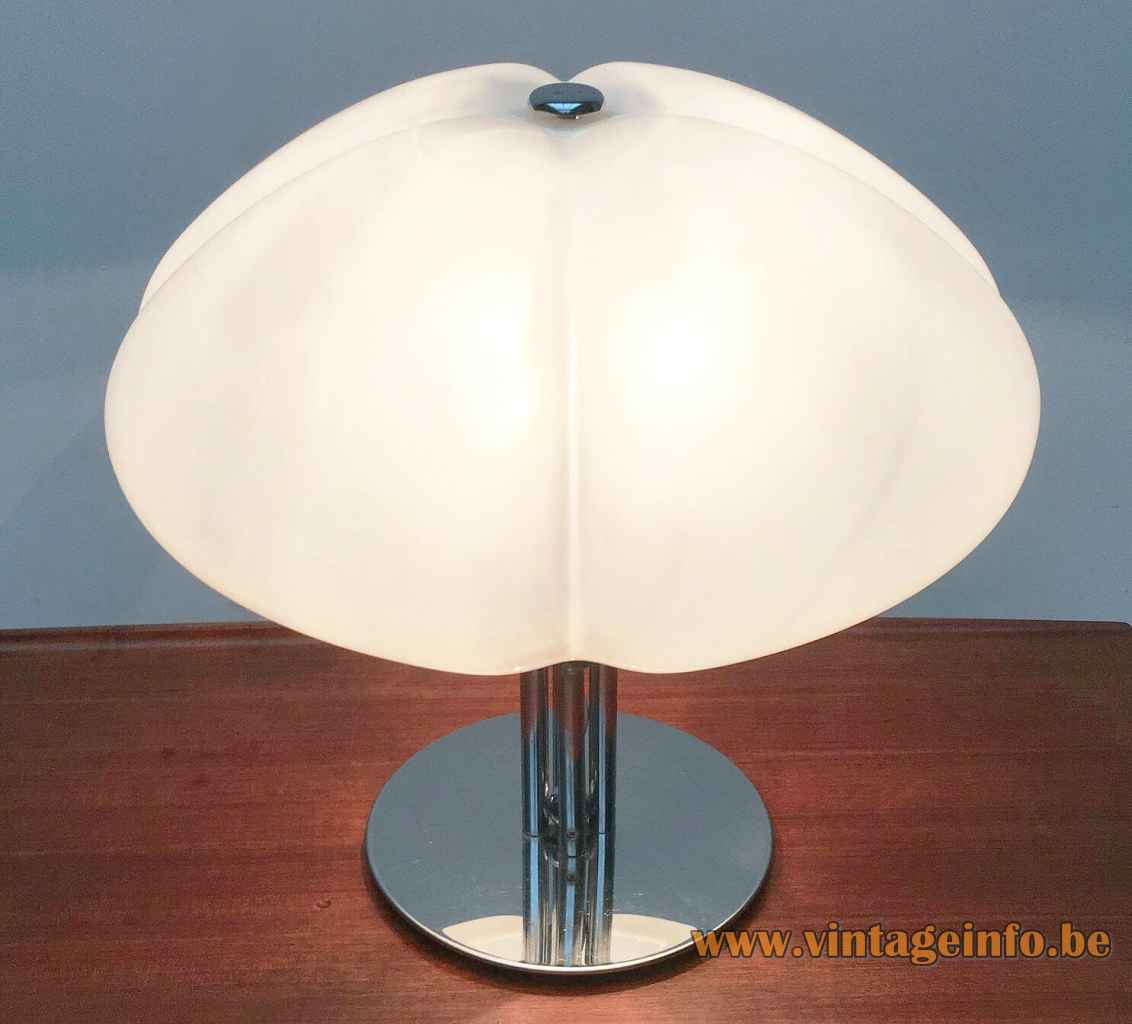 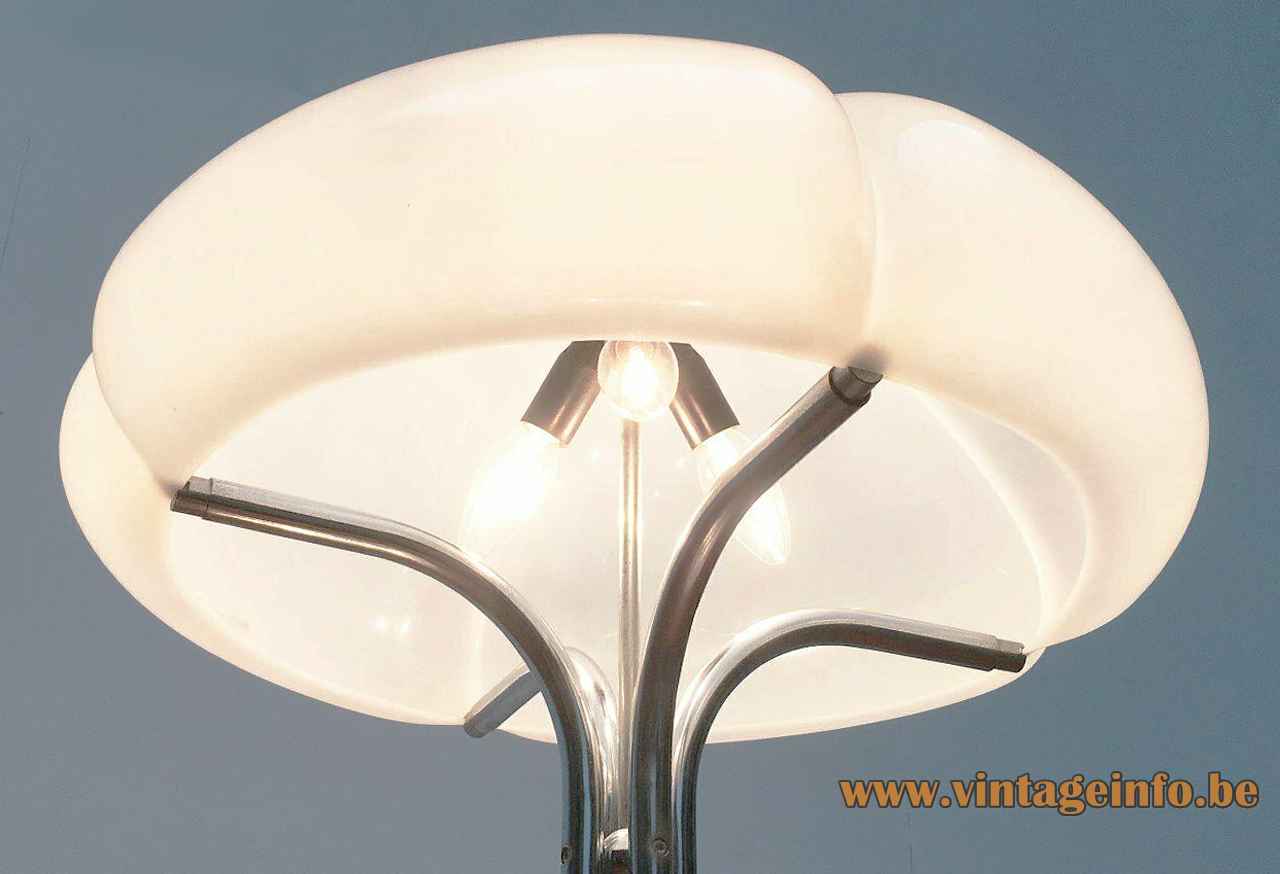 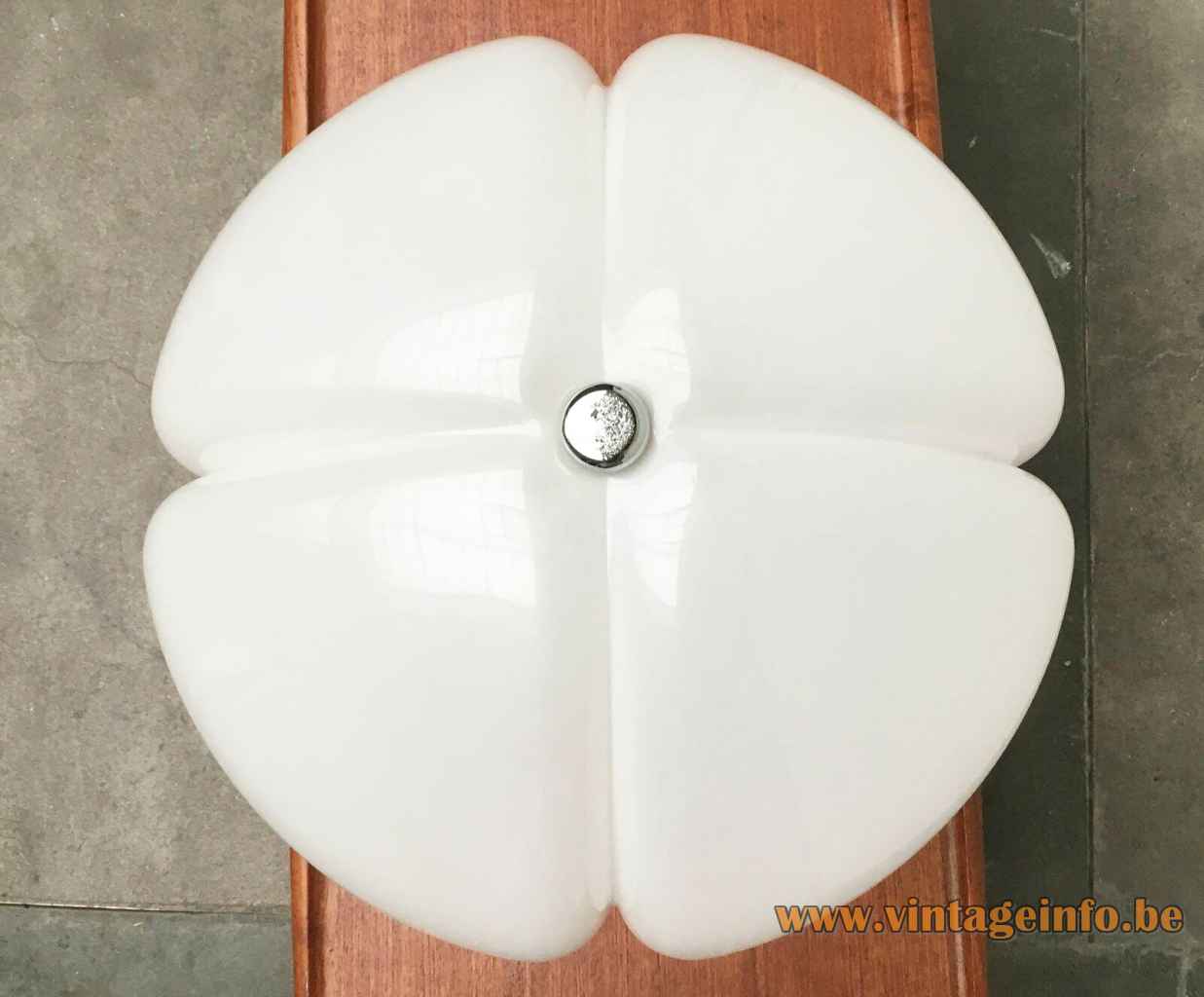 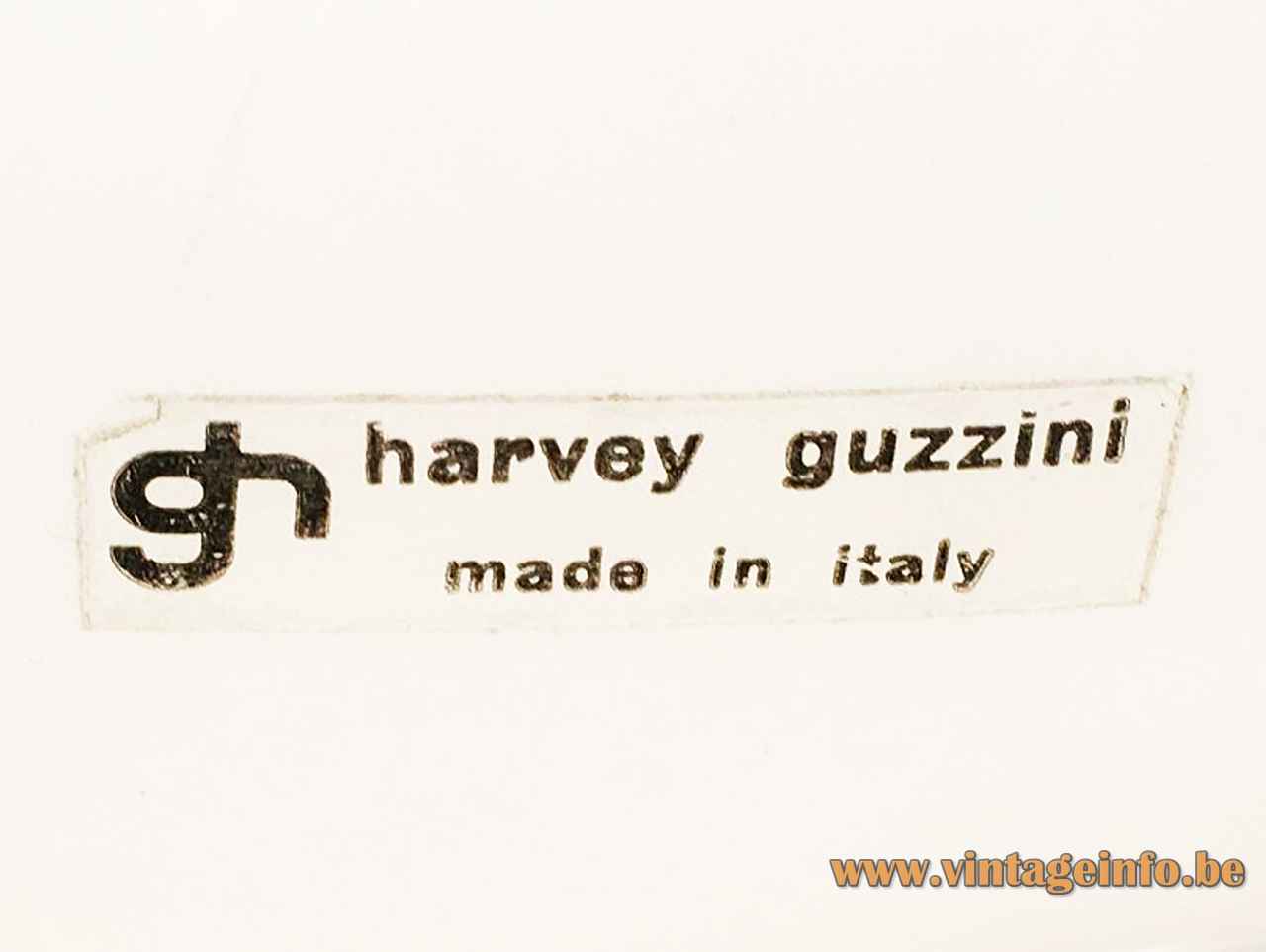 The Harvey Guzzini Quadrifoglio table lamp and floor lamp were used as a prop in the Endeavour TV series season 7 episode 2 (Raga) from 2019, aired in 2020. Many lamps appear in this episode which is situated in 1970. Among others the FLOS IC floor lamp designed by Michael Anastassiades in 2014… 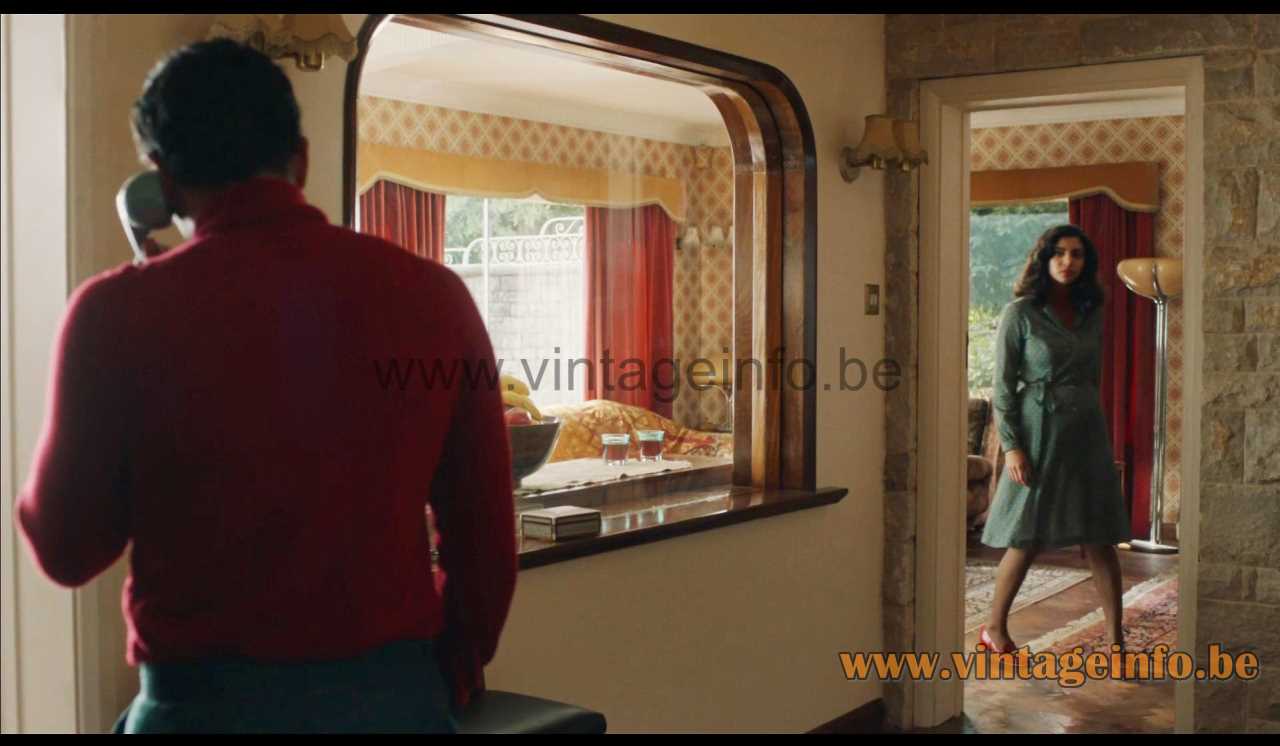 A Quadrifoglio table lamp was used as a prop in the 1974 French-Italian comedy film Le Mouton Enragé (Love At The Top). Starring: Jean-Louis Trintignant, Romy Schneider and Jane Birkin. 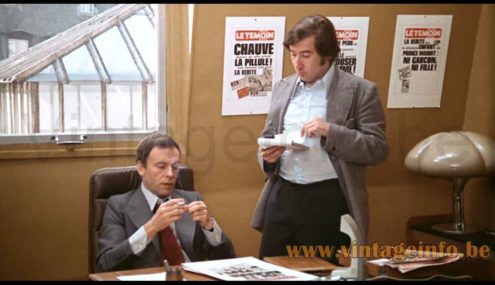 Other versions: The Harvey Guzzini Quadrifoglio table lamp exists also as a floor lamp and pendant lamp. It was at least also made in brown, yellow, green and orange.

This Harvey Guzzini Quadrifoglio pendant lamp is often attributed to Gae Aulenti (1927-2012), but those are false assumptions. Gae Aulenti started to work for the iGuzzini company in 1985 and created together with Piero Castiglioni the (industrial) Cestello lamp series for the Palazzo Grassi in Venice, Italy; 17 years after the Quadrofoglio was designed. Source: the website of iGuzzini and the book: “Culture of an Italian Region. The Marche, Guzzini and design“, written by Augusto Morello, published in 2002. The Cestello lamp series was in production from 1985 until 1993.

The Quadrifoglio table lamp has some similarities with the Pipistrello lamp Gae Aulenti designed for Martinelli Luce. Most likely the story originated that way. Several designer books are wrong, unfortunately.

iGuzzini illuminazione was established in June 1958 by Raimondo Guzzini (born 1928) under the name Harvey Creazioni. Harvey is derived from the famous movie ‘Harvey’ with James Stuart and the invisible rabbit Harvey from 1950.
The initial production of enamelled copper objects was supplemented by decorative luminaires.
In the early sixties it became a family business when his 5 brothers joined the company. In 1962 Luigi Massoni was attracted to lead the design team. He worked for Fratelli Guzzini and Harvey Guzzini until 1976. Luigi Massoni designed many iconic lamps in that period. They are on display here on Vintageinfo. 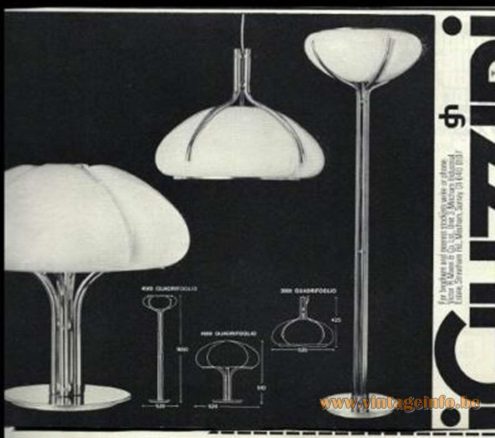 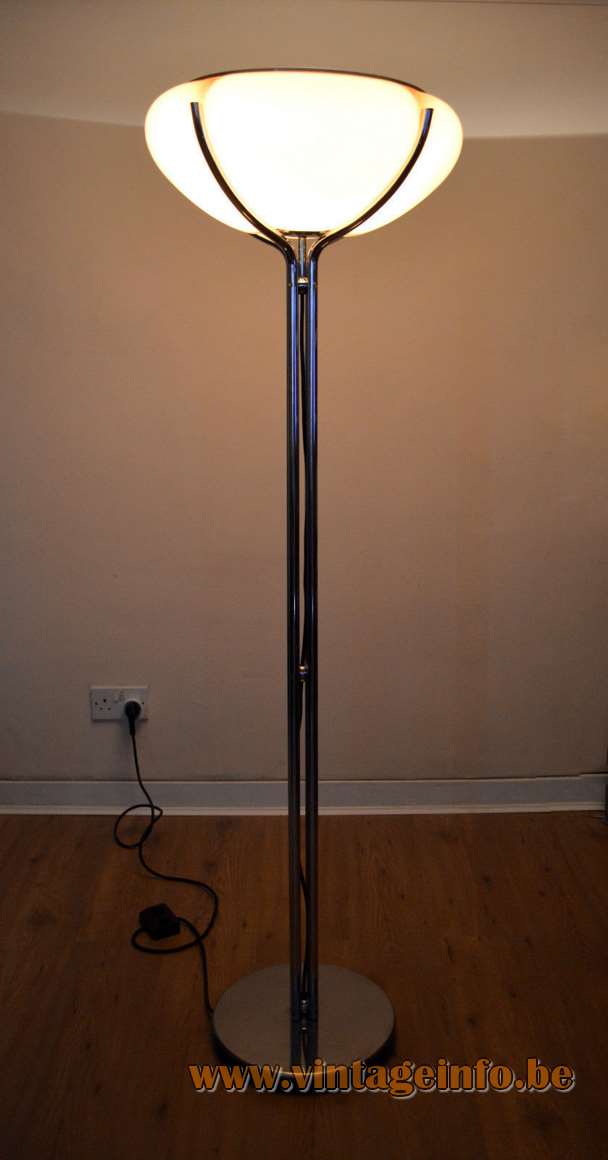 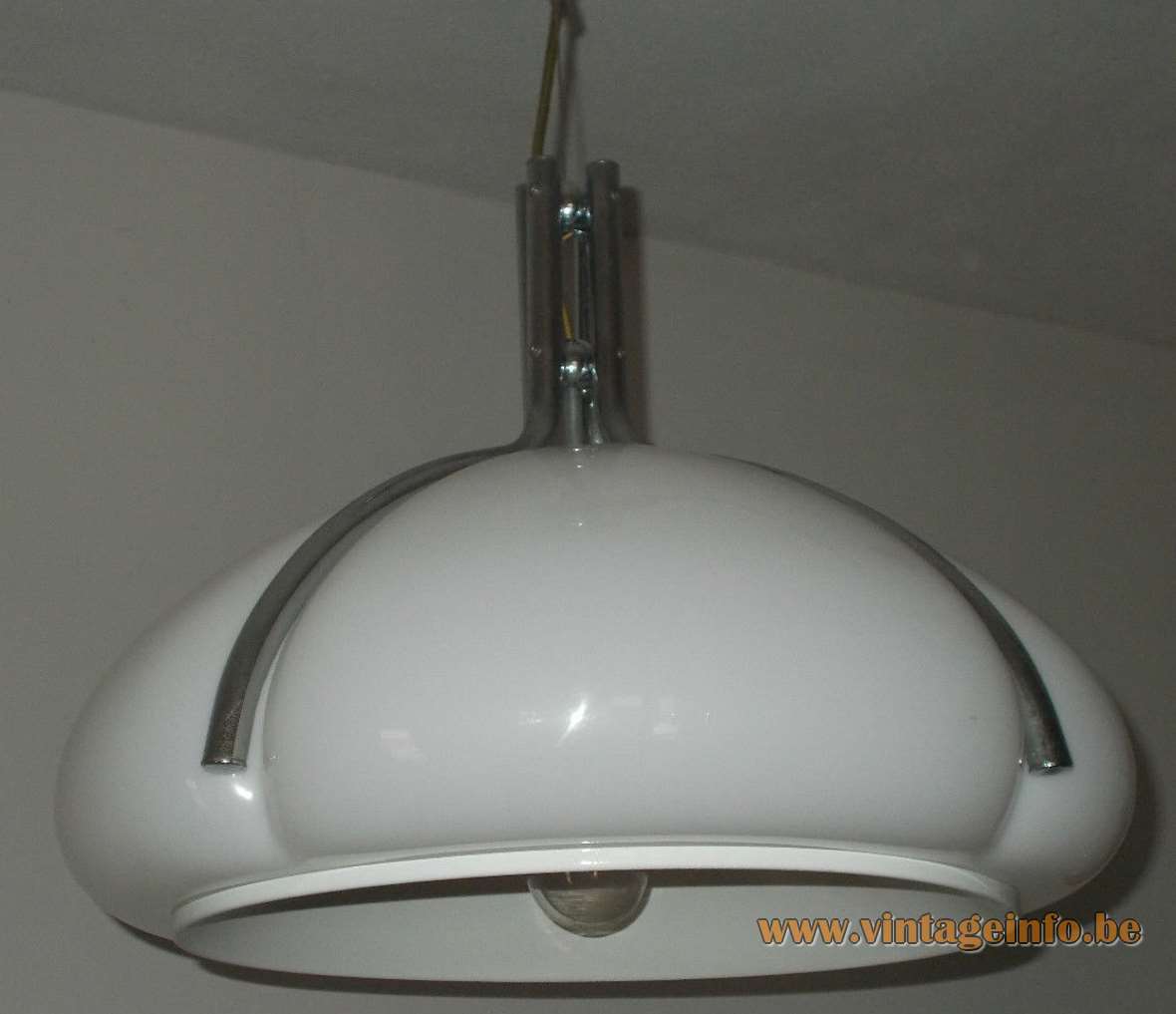 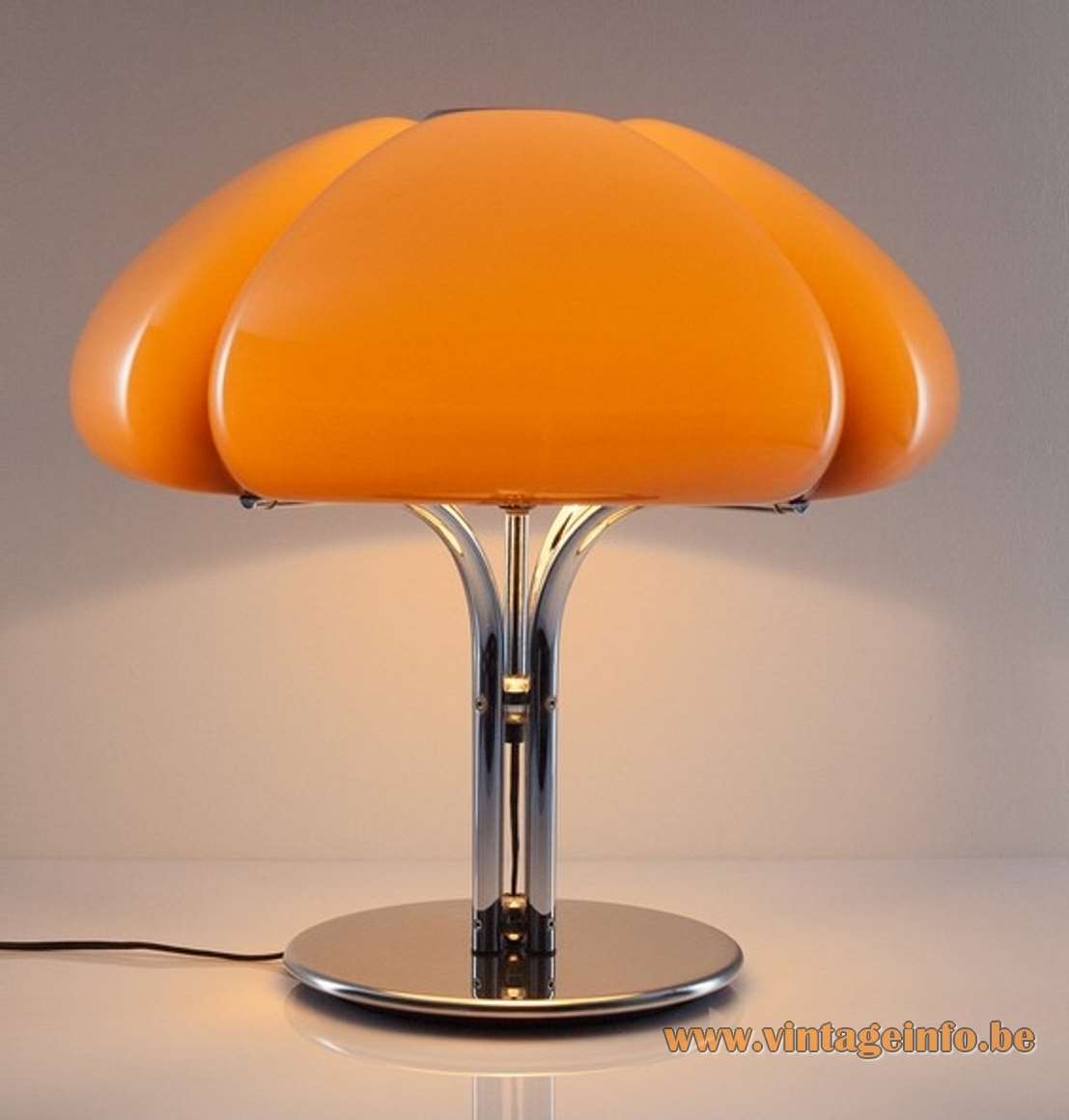 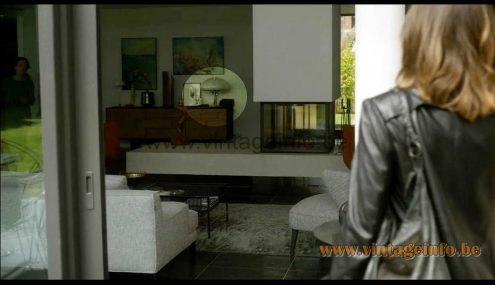 The Harvey Guzzini Quadrifoglio table lamp and floor lamp were used as a prop in The Little Drummer Girl, a TV Mini-Series from 2018. Based on the novel of the same name by John le Carré published in 1983.

The Harvey Guzzini Quadrifoglio table lamp was used as a prop in the French film Le Corps De Mon Ennemi (Body of my enemy) from 1976 with Jean-Paul Belmondo. Many Harvey Guzzini lamps together with Stilnovo and Raak lamps appear in this movie. 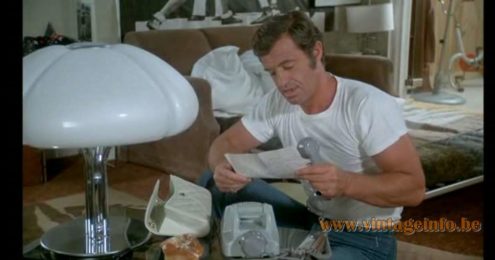 Between 1967 and 1971, Ennio Lucini designed the catalogue tor the Design House brand (DH), under which lamps for home lighting were marketed.