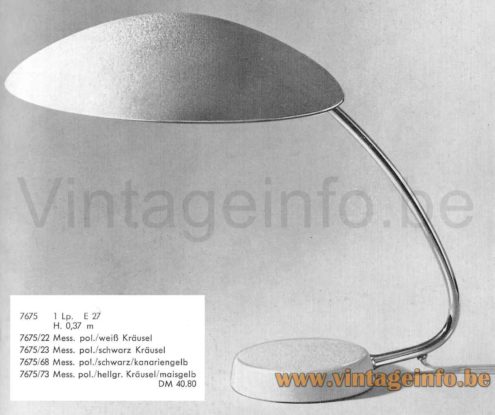 Many Thanks to Ger for the beautiful pictures and enthusiasm.
Many thanks to Max from Sprookjes.eu for the catalogue picture and the enthusiasm.

Other versions: The Gebrüder Cosack UFO desk lamp was made in several colours. It is model 7675. The numbers after the slash are the colours. This black one is a strange model with the brass nuts on top. Or it is repaired, or it is a special model.

The switch was made by the VLM Components company from Buccinasco, near Milan in Italy. Today VLM Components is owned By Relco. It is one of the biggest suppliers of switches, cords and plugs in Europe. VLM Components became famous for the switches they produced that were designed by Achille Castiglioni.

Yellow version of this lamp