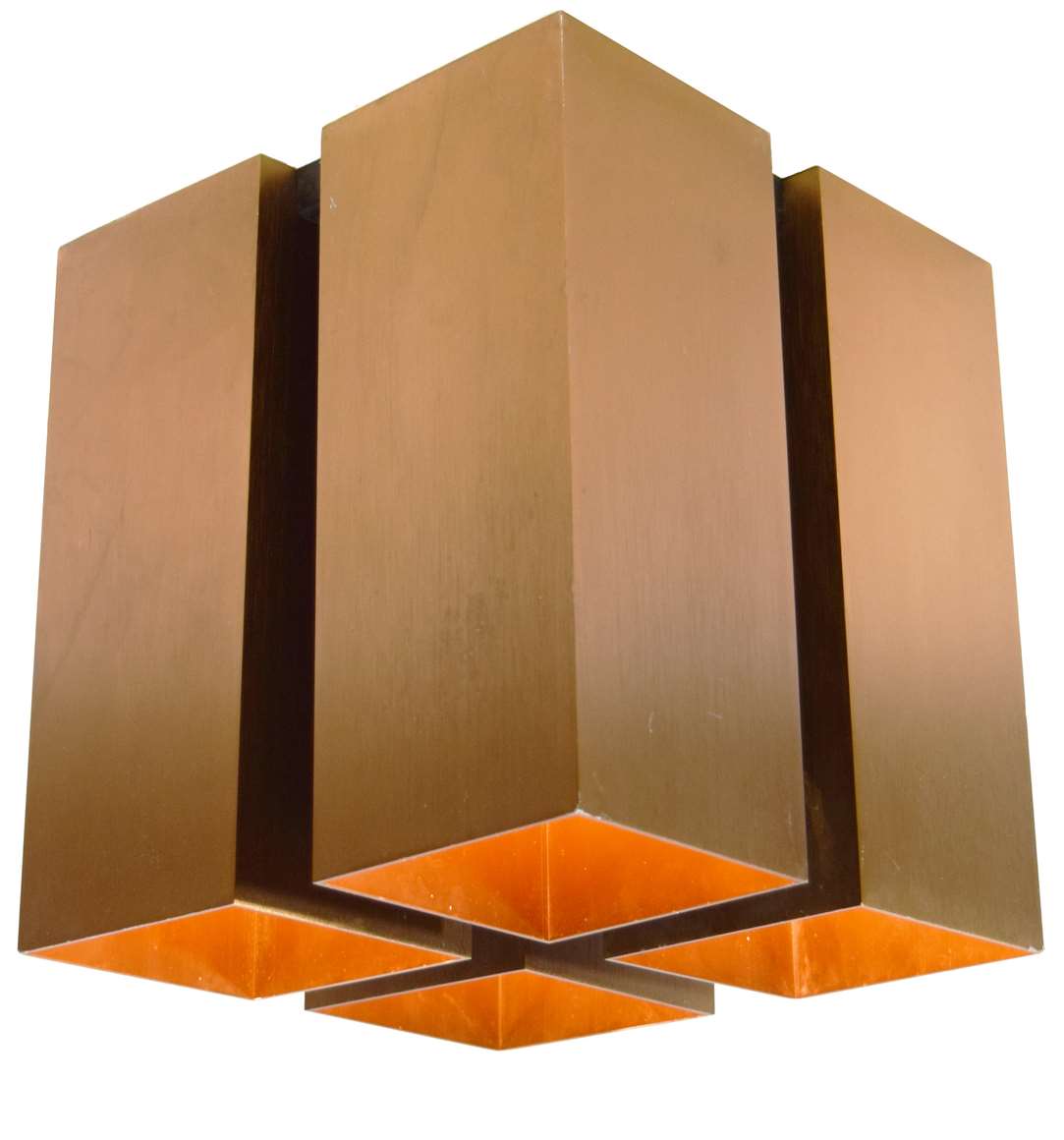 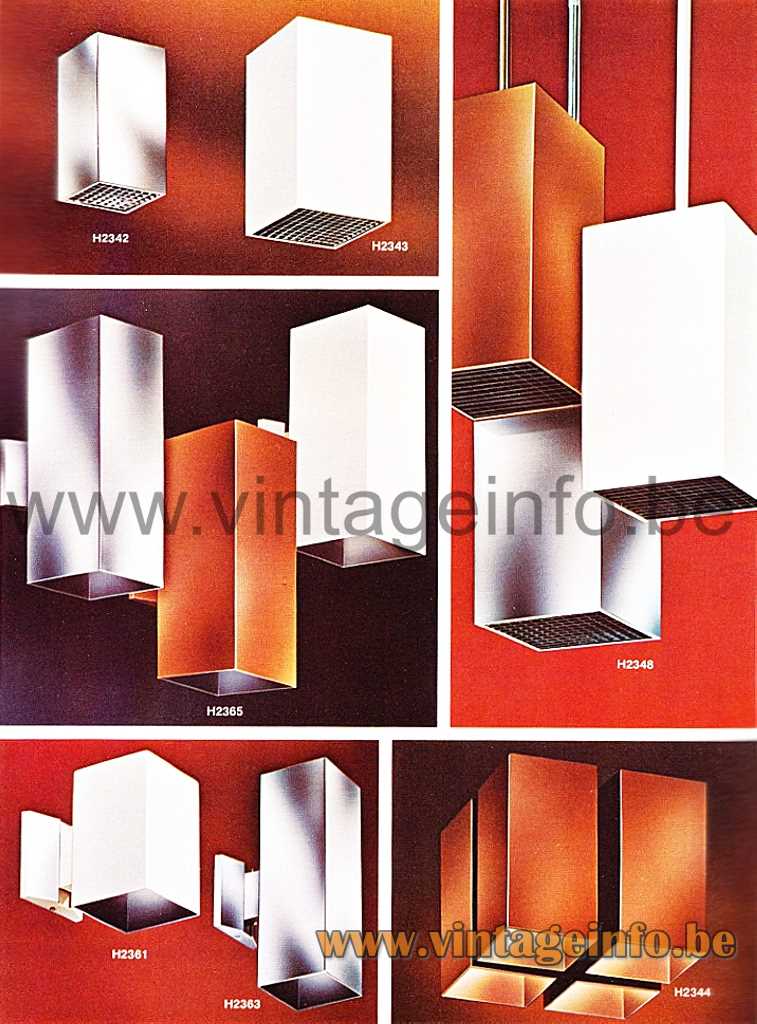 The Quadrille flush mount in the Lightolier catalogue 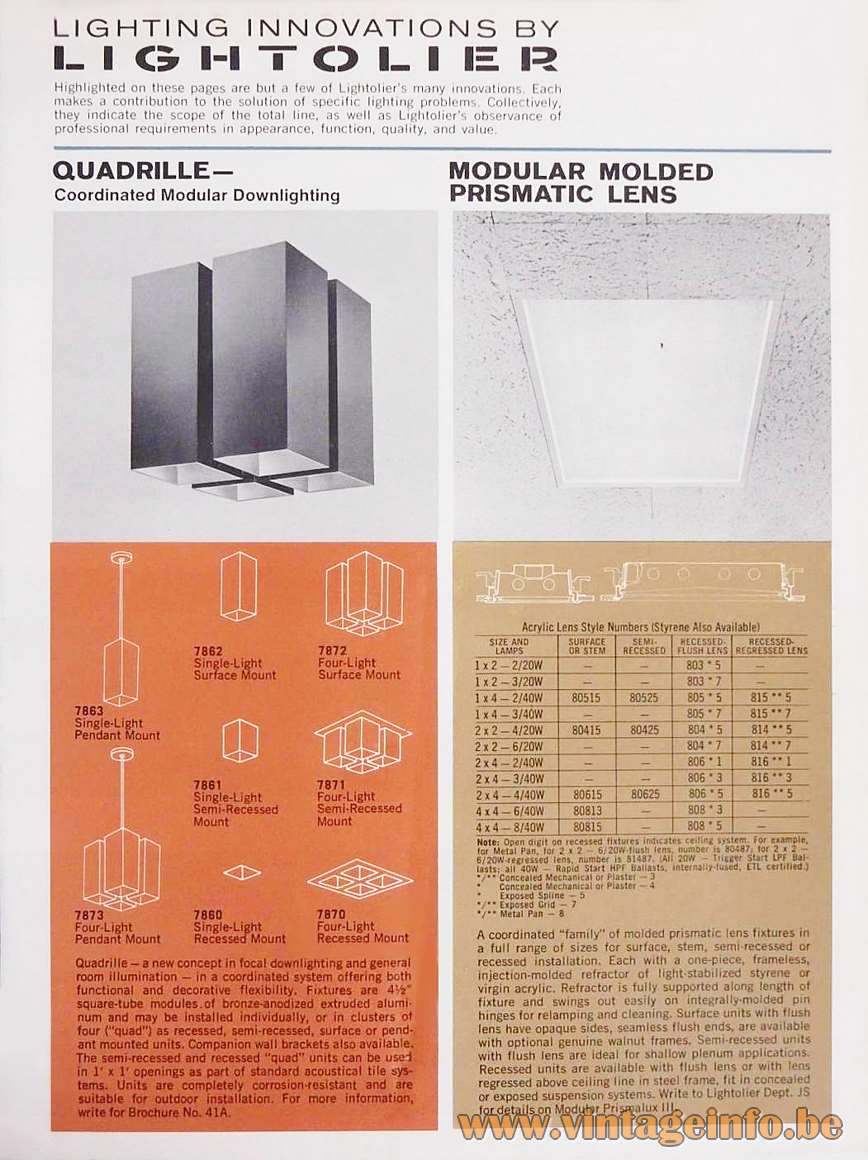 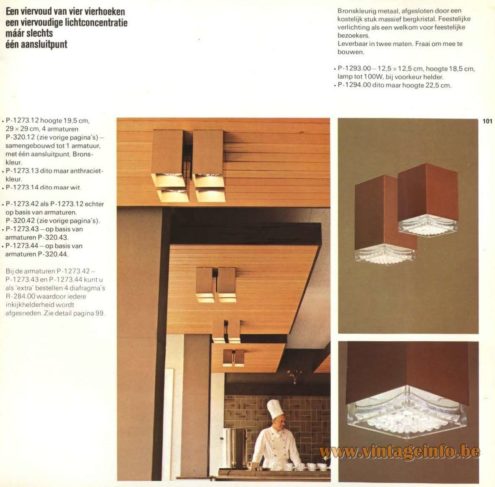 Other versions: The Quadrille flush mount exists as a single lamp, a pendant lamp, a chandelier and a recessed flush mount. Several different wall lamps exists. This lamp is labelled CLI.

The American company Lightolier imported these flush mounts and sold them in the United States as well as Halo Lighting. They appear in a 1971 catalogue of the company.

Concord Lighting International Ltd or CLI, was founded in 1968 by the famous Rotaflex company.

The Powerflood, one of the first display applications of the double-ended linear halogen lamp, took the lighting market by storm, so much so that Luciano Zucchi, design manager of Concord’s original parent company Rotaflex, commented ‘We don’t sell light fittings – we sell lighting’.

Since 1990, Concord is part of the Feilo Sylvania Group and is one of Europe’s most respected Architectural lighting brands.

Lightolier was founded in 1904 by Bernhard Blitzer as the New York Gas and Appliance Company. A few years later electric lighting was more widely accepted and the name of the company changed into Lightolier. A contraction of the words light and chandelier.

In the beginning Lightolier specialised in special decorative chandeliers. From the 1920’s on they made a shift to high-end design and architectural lighting.

It was 1961 when Lightolier introduced the first track lighting system; the company’s most iconic product. It was invented and designed by Anthony C. Donato (19?? – 2014). Mr. Donato became Senior Product Designer at Lightolier. He obtained 32 United States patents and numerous professional accolades. Including being honoured as a Fellow of the Illuminating Engineering Society.

Another popular lamp is the Lytegem, designed by Michael Lax, which is part of the permanent collection of the Museum of Modern Art in New York (MoMA).

In 2007, Lightolier became part of Koninklijke Philips. (Philips Royal Electronics from The Netherlands).

In The Netherlands Raak Lichtarchitectuur, Amsterdam sold very similar lamps as “Viervoud” (fourfold, quadruple). Raak ‘Viervoud’ flush mount models: P-1273, P-1293, P-1294. The lamp with more rounded corners is P-1444. The shorter version is the B-1273. You can find it over here.

1. A quadrille is a square dance performed typically by four couples and containing five figures, each of which is a complete dance in itself.

2. A trick-taking card game for four players using a deck of forty cards fashionable in the 18th century.

3. A ruled grid of small squares, especially on paper.

The Dutch company Raak was founded in 1954 by Carel O. Lockhorn (18 June 1923 – 6 October 2004). Lockhorn was a previous employee of Philips Lighting from Eindhoven. Raak, which means “to hit” in Dutch, implies design which precisely “hits the nail on the head”.

Raak is best known for their organic modern design of the 1960s and 1970’s. Which combined glass & metals for a sophisticated futuristic style.

Raak also collaborated with other companies. They worked with the German Peill + Putzler for the Raak Globe lamps. Peill + Putzler produced the glass. They also sold lamps made by Peill + Putzler, such as a pendant lamp designed by Aloys Ferdinand Gangkofner. For the Raak Discus the glass was made by Bega, also a German company. For the Stalactites flush mounts a cooperation with the Belgian Val Saint Lambert was undertaken in the late 1950’s.

Carel Lockhorn sold the company in 1974 to ITT but remained a director until 1977. In 1980 Raak merged with BIS Lighting from Aalsmeer, also in The Netherlands. Raak was renamed into BisRaak. In 1986 the Raak company became independent again. The company got a business appearance and only the colours white, black and grey were still processed.

Raak Viervoud in the Raak catalogue

Many thanks to Ken for the beautiful lamp!