Herbert Proft designs on the iF Design Awards website

Droplet chandelier in this style

Crackle glass chandelier in this style

This one is model 1203, as labelled. Another chandelier made with crackle glass can be found here on Vintageinfo. Many models exists, below 2 others in a 1979 catalogue.

Due to the lack of power and the difficulty in obtaining materials during the immediate post-war period, construction was initially slow. However, on 12 May 1947 the glass-works finally held its first topping-out ceremony, and barely 2 months later, on 7 July 1947, Dr. Heinrich used the blowpipe to take the first glass melted in Limburg.

Another model of this Herbert Proft Glashütte Limburg chandelier was used as a prop in the 2022 Dutch TV series Dirty Lines. Here in season 1, episode 6. Starring: Joy Delima, Minne Koole and Chris Peters. 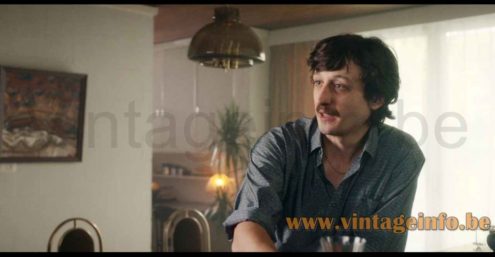