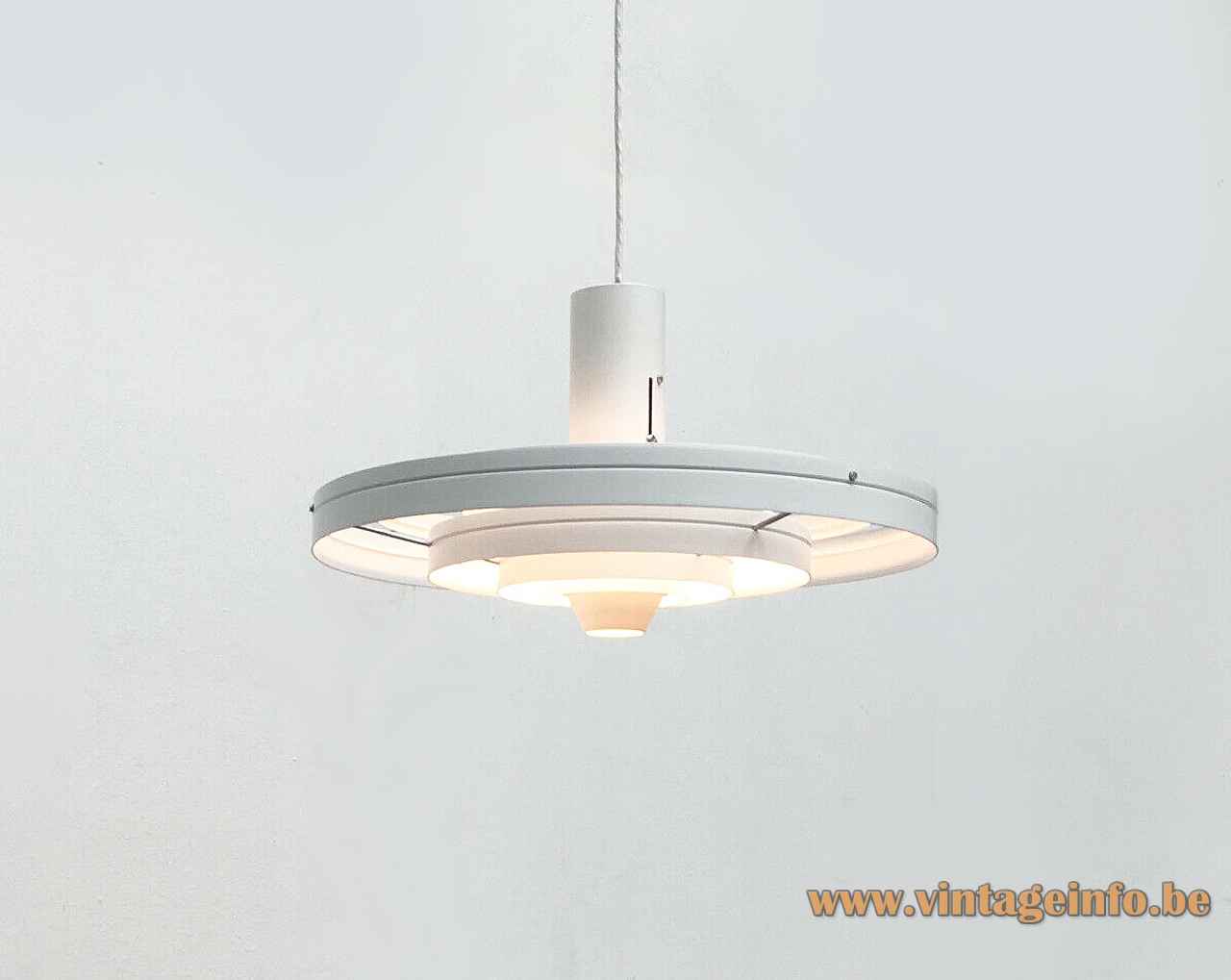 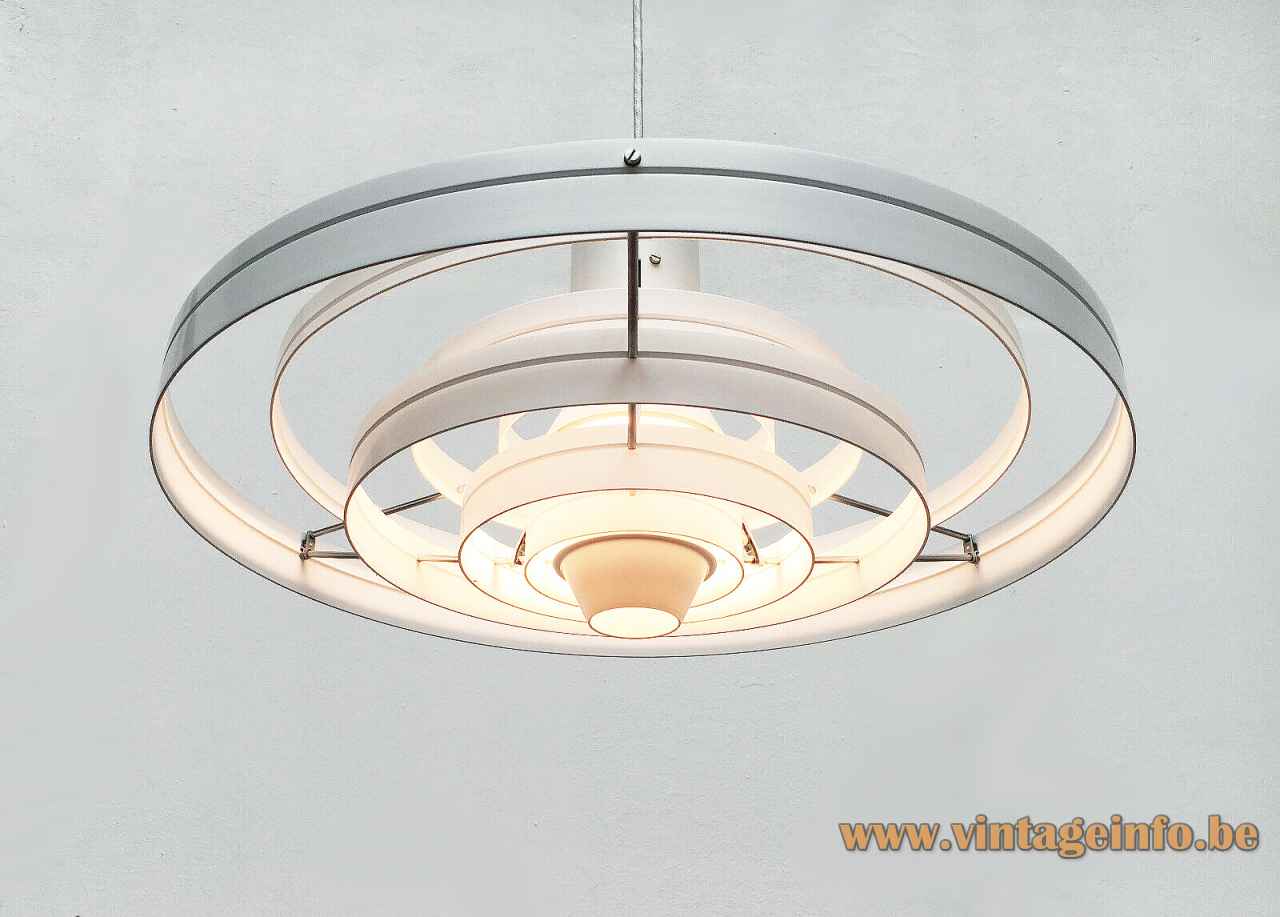 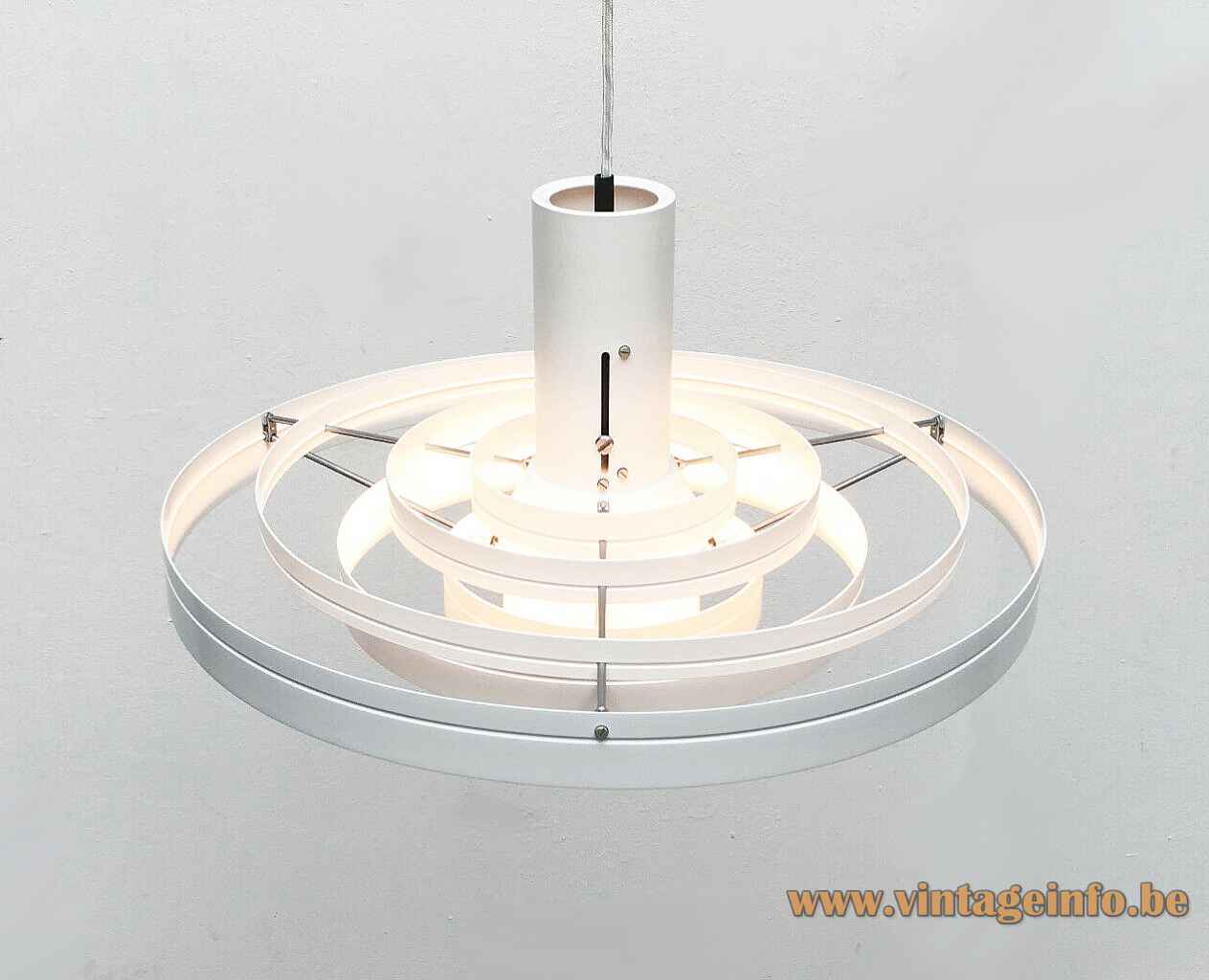 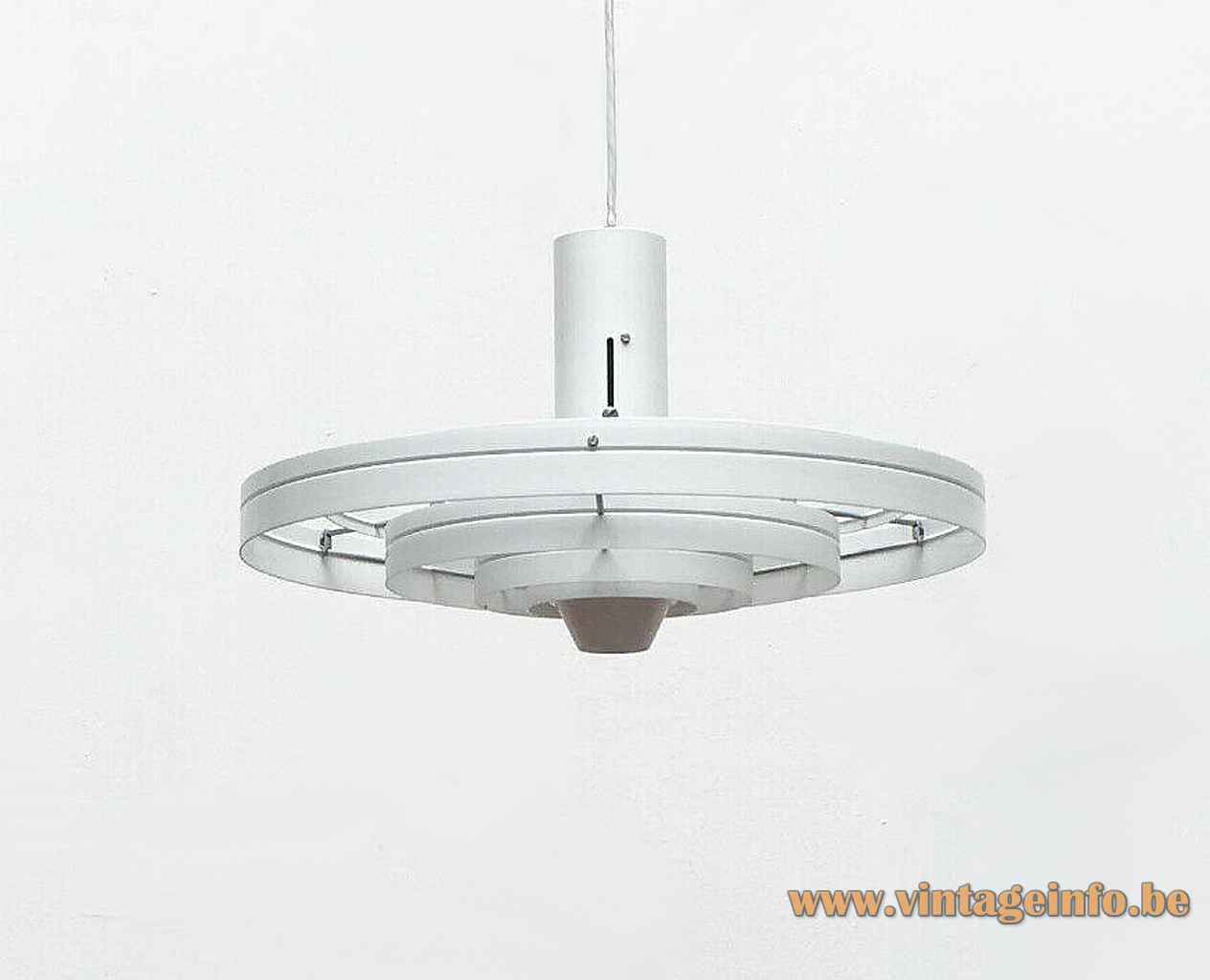 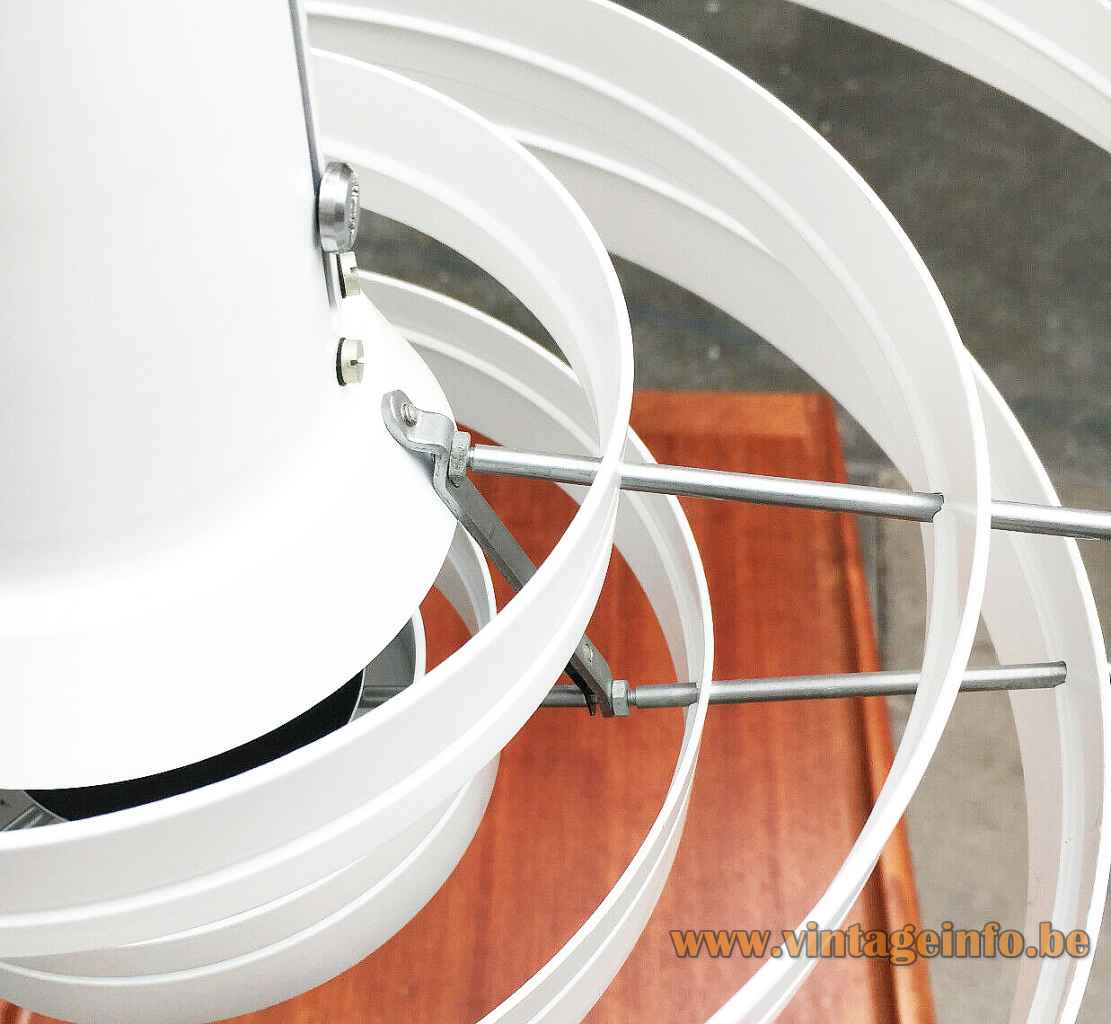 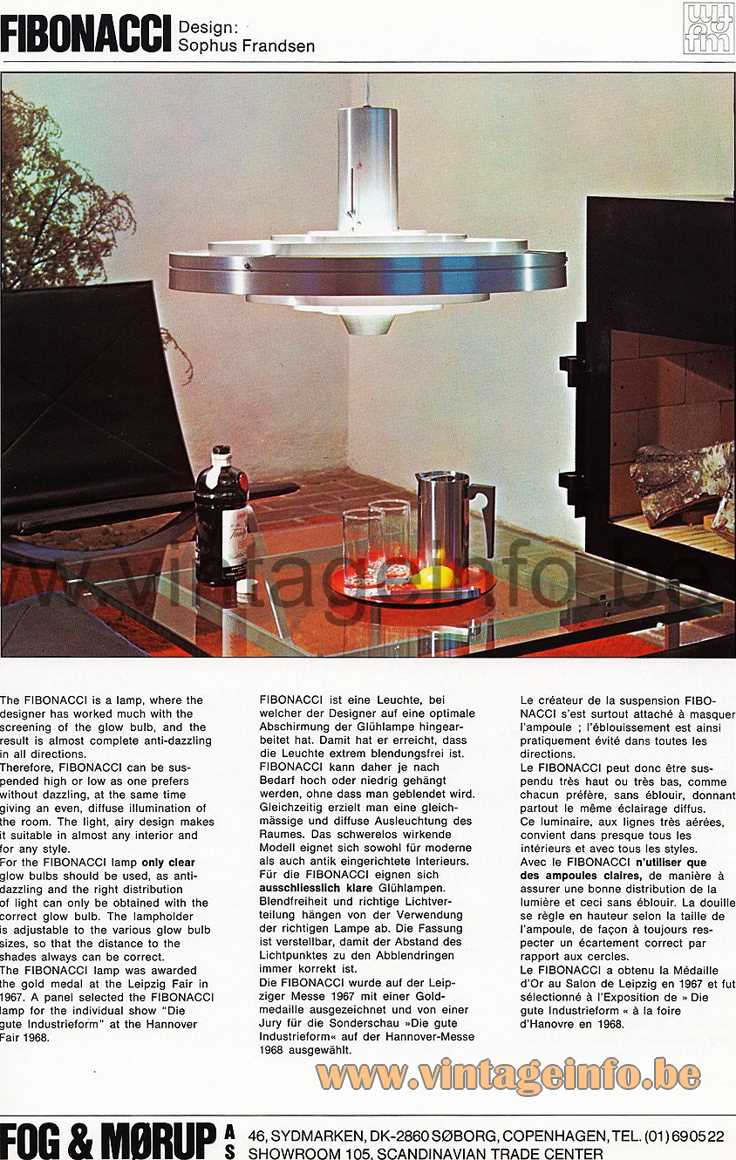 Many thanks to Craig from From our house to Bauhaus for his enlightening information about this lamp. You can find his shop on Ebay over here.

Other versions: The Fog & Mørup Fibonacci pendant lamp exists in several colours and two sizes. The bigger version is 61 cm / 24.01” wide and uses a light bulb of maximum 300 watt.

The Fog & Mørup Fibonacci pendant lamp is often sold without the diffuser below. Maybe they were also sold without diffuser. You can find several lamps online without it. However in catalogues they always appear with the diffuser, never without. In all probability people got rid of the diffuser because when using a “normal” light bulb of 60 watt, the lamp does not provide enough light when the diffuser is attached. It is connected to the lamp with a click mechanism and can easily be removed to change the light bulb.

The light bulb can be changed in height for more direct lighting.

This Fog & Morup Fibonacci pendant lamp is equipped with a porcelain socket by Lindner with the initials LJS.

The Fibonacci pendant lamp won the gold metal at the Leipzig fair in Germany in 1967. A panel selected the Fibonacci lamp for the individual show “Die Gute Industrieform” (The good industrial design) at the Hannover fair in 1968, also in Germany. This pendant lamp stayed in production until the takeover in the early 80s by Lyskær.

It appears that the German Staff lighting company also sold this pendant lamp. Sometimes you find it with a Staff canopy.

Sophus Frandsen, born in 1927, was a Danish architect and professor. He graduated from the the Royal Danish Academy of Fine Arts (Det Kongelige Danske Kunstakademi) in Copenhagen in 1953. At that time he was already employed by Arne Jacobsen. In the catalogue picture a coffee pot appears that was designed by Arne Jacobsen in 1967 for Stelton, one of the first designs of the Cylinda-line range.

In 1976 he started to collaborate with fellow architect Ebbe Christensen and the two ran an architectural firm for many years.

For more than half a century Frandsen researched and taught the nature of light and its practical application at the Royal Danish Academy of Fine Arts.

Sophus Frandsen past away in 2013.

The lamp socket of this Fog & Morup Fibonacci pendant lamp was made by the German Lindner company. It was founded by Kurt Lindner in 1901. He took over the management of a bankrupt factory for electrical ceramics in Jecha near Sondershausen. LJS is the abbreviation for Lindner Jecha Sondershausen.

In 1925 Lindner already had 1100 employees. Lindner acquired the company Hugo Löbl and sons in Bamberg in 1938. Jecha was located in East Germany and in 1946 the company was disassembled by the Soviet Union and became national property.

Kurt Lindner moved his company to Eggolsheim near Bamberg. In the 70s the company specialised in fuse ceramics. In 1997 Lindner merged with Gould Shawmut.

Ferraz takes over the Gould Circuit Protection Group in 1999. Lindner becomes part of the company. In 2011 the Thomas Hoof Product Company takes over the Lindner brand and continues to produce some moulds.

The most famous designer that worked for Lindner is Wilhelm Wagenfeld (1900-1990). He designed many lamps for the company. More info about Wagenfeld can be found here on Vintageinfo.

Fog & Mørup Fibonacci Pendant Lamp – With and without the diffuser 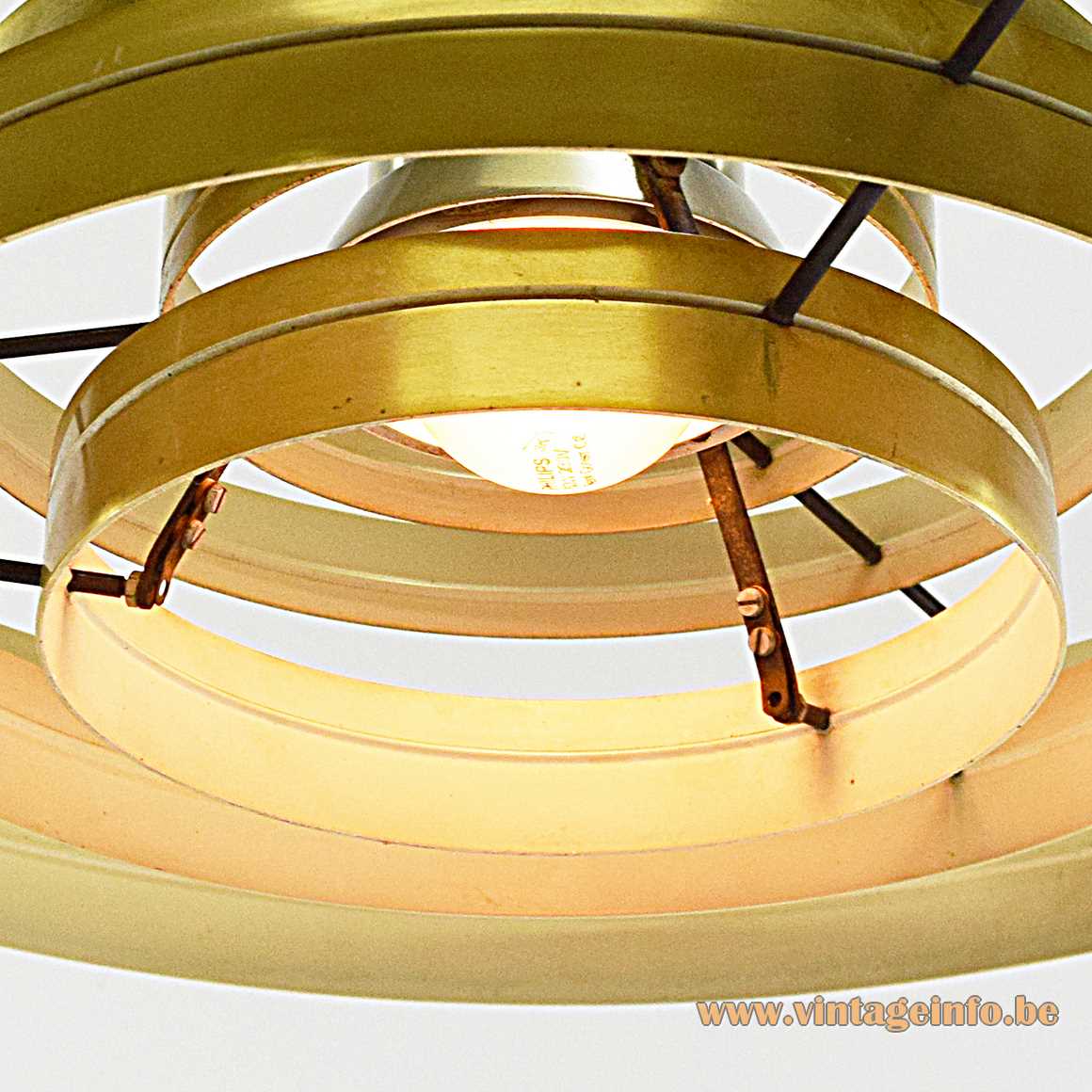 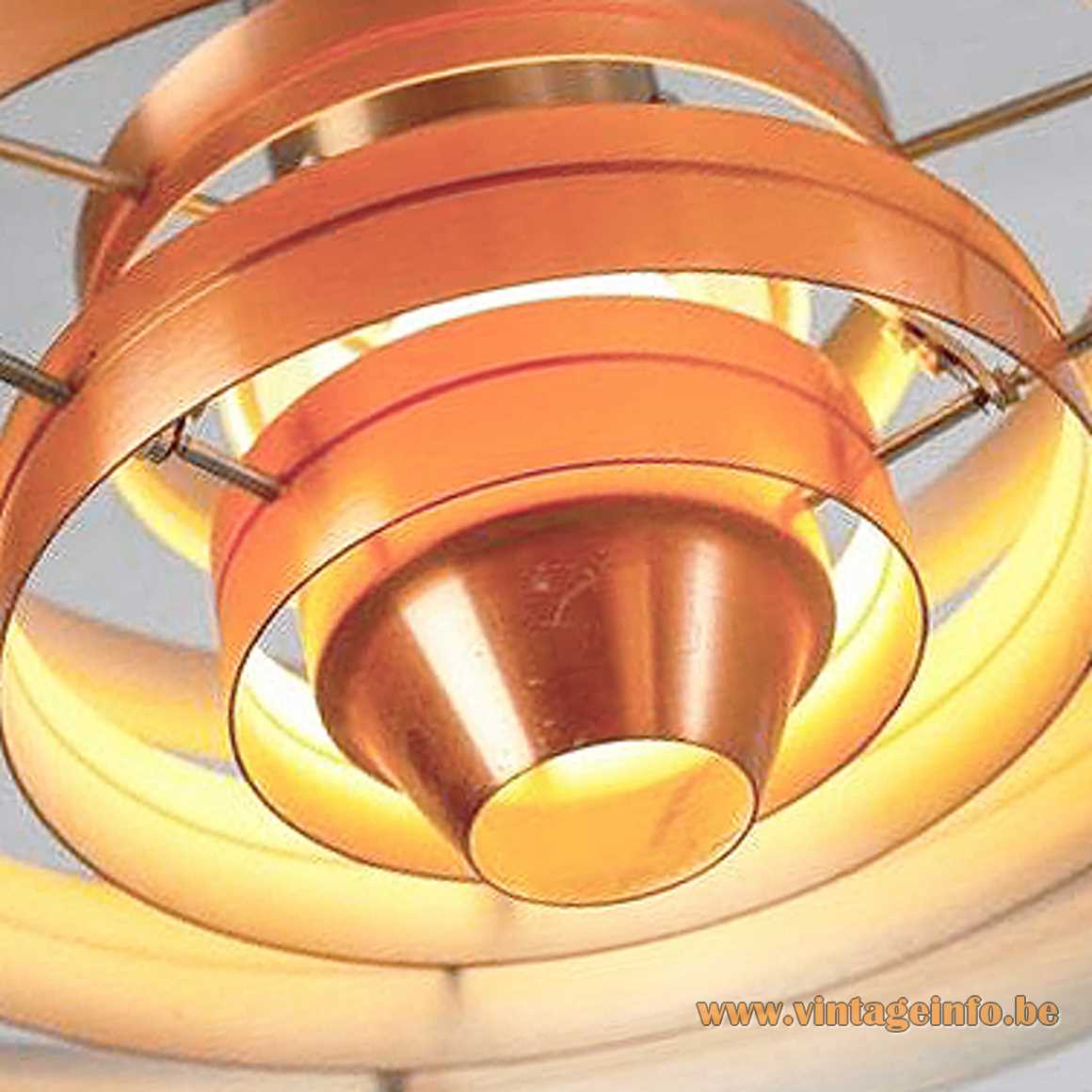 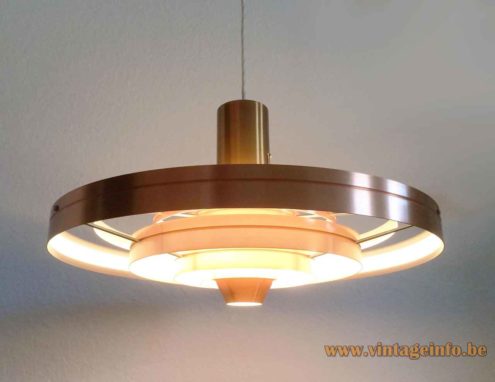