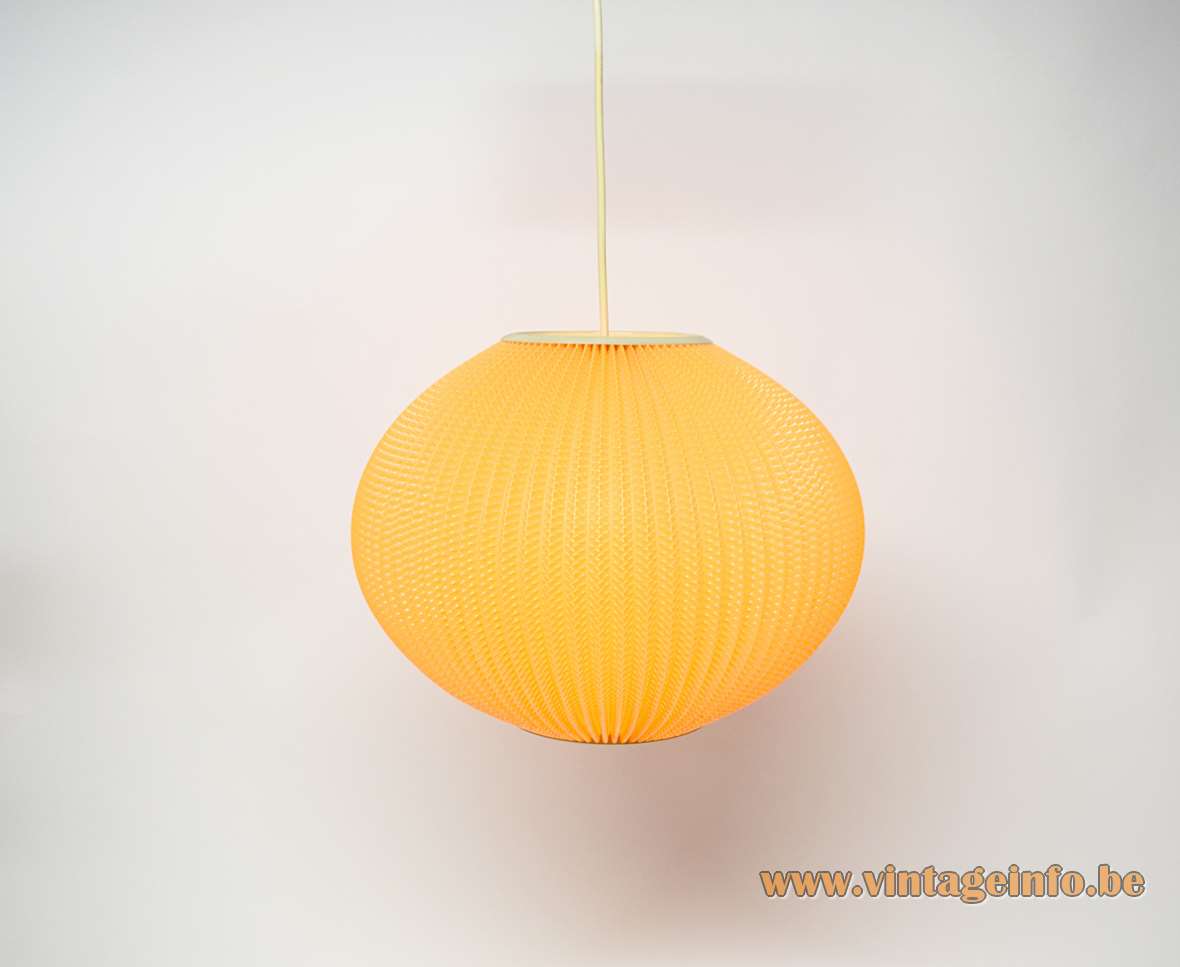 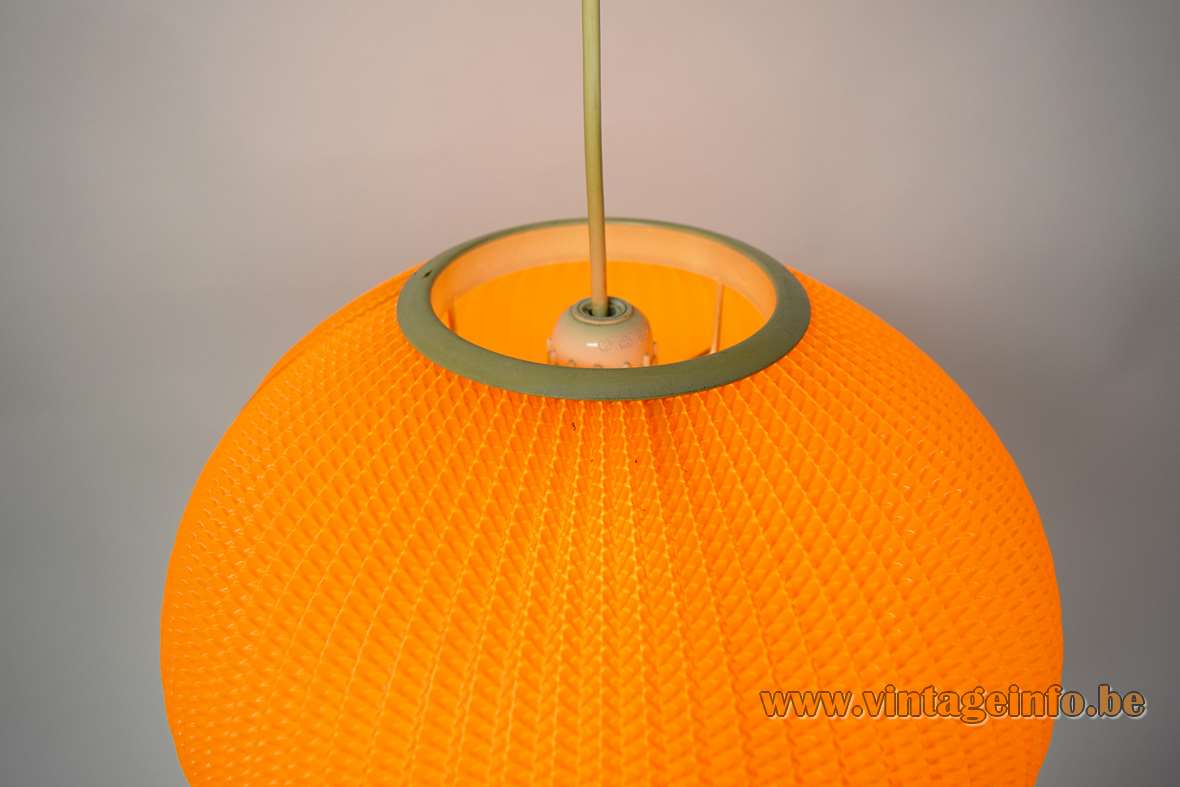 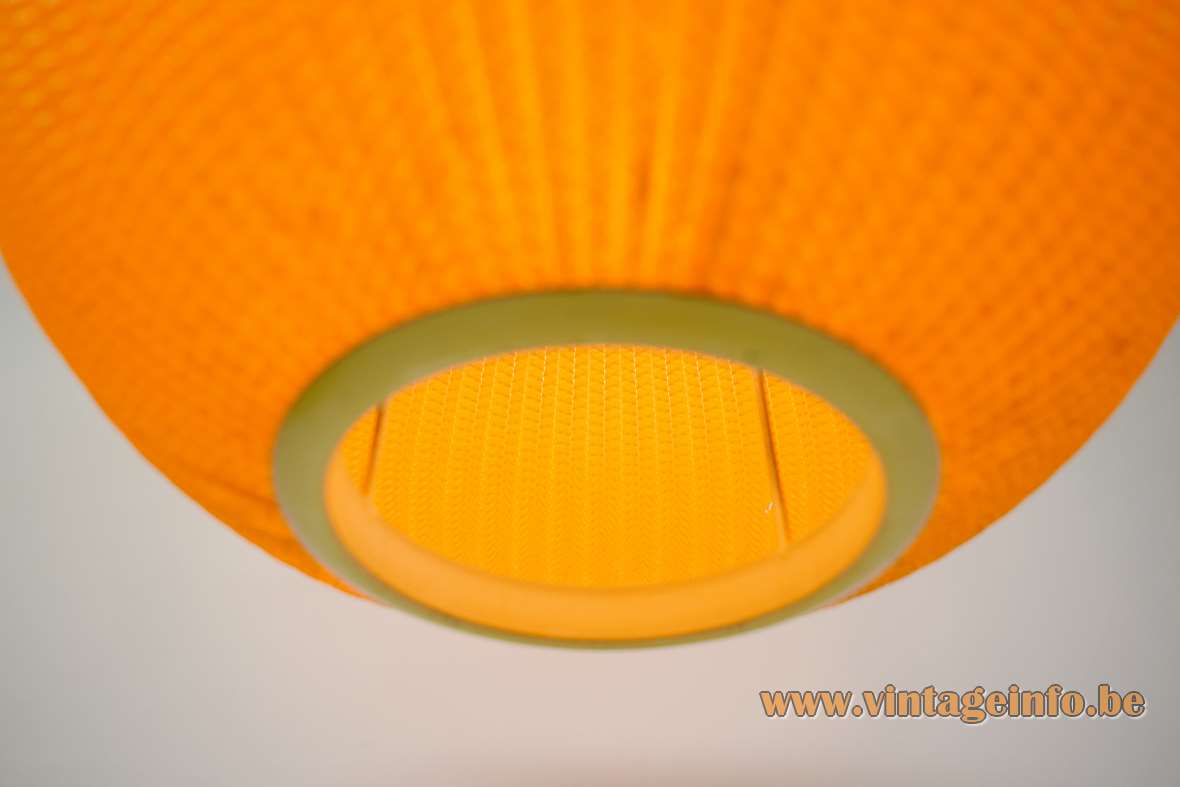 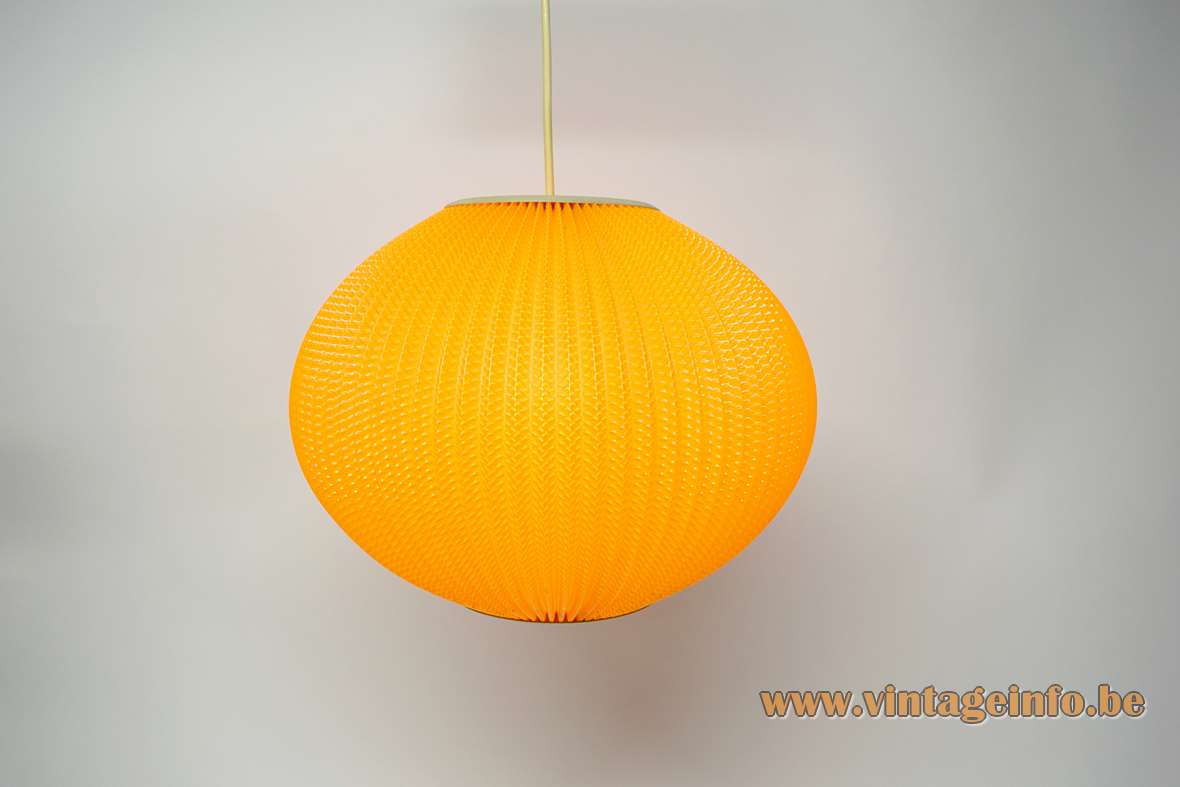 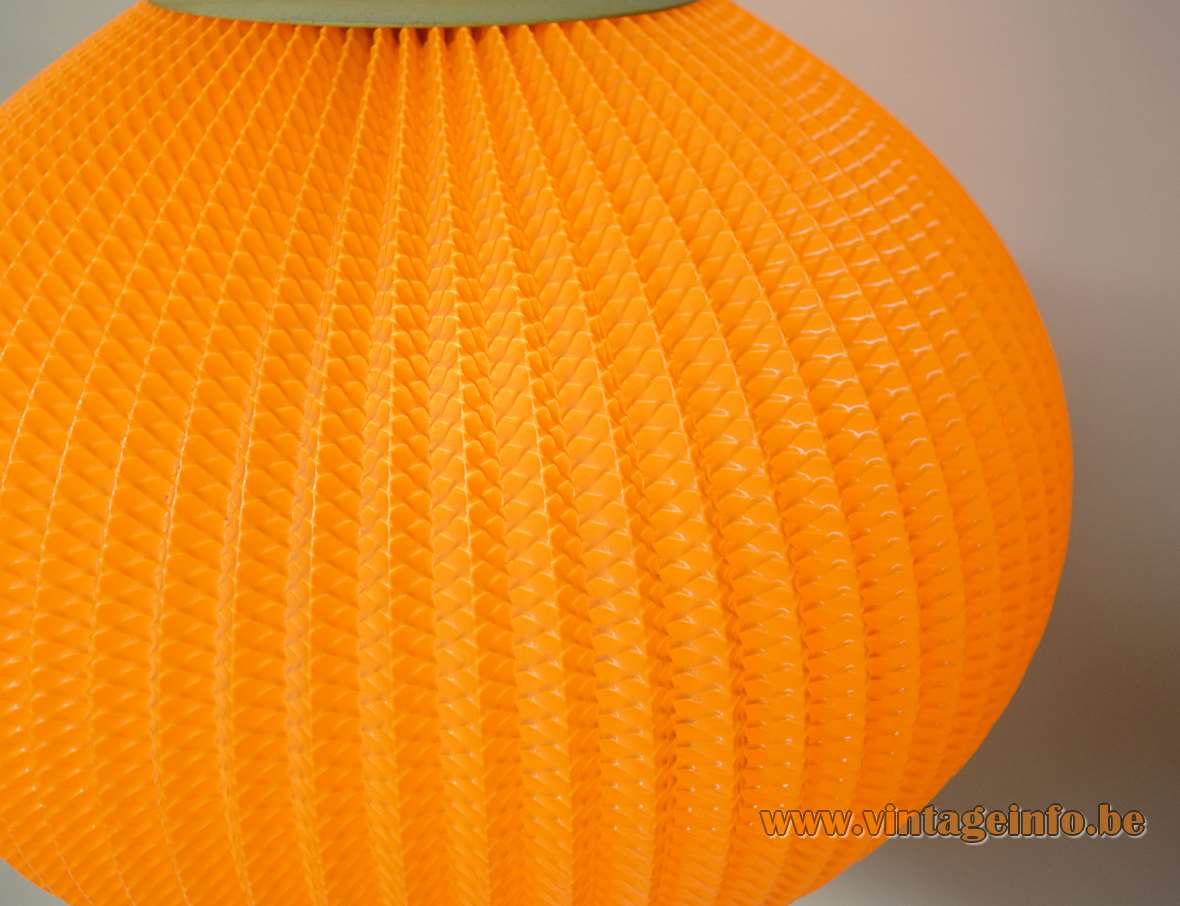 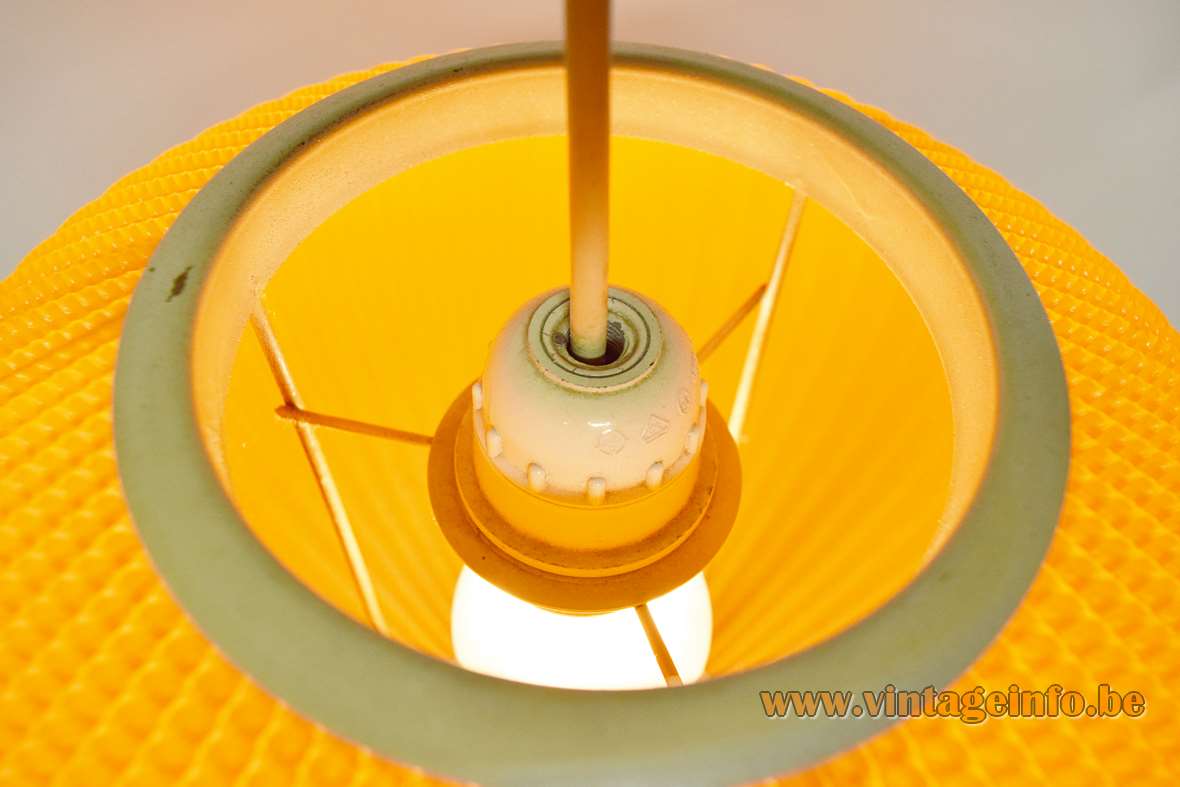 Other versions: This orange Pearlshade pendant lamp exists at least in white with black rims. Probably also made in other colours.

Although it looks very similar to the Pearlshade lamps of the Danish Hoyrup company, it is not. Not only they never produced a complete round one, the two rings are completely different. The top part was always slightly larger and rounder than the bottom part. In the beginning these lamps were also produced with a wire-frame. Later a clear plastic tube was used. It was glued together with the top and bottom ring. This fragile plastic was produced by the German company Dynamit Nobel from Troisdorf.

Do you have an idea about the maker of this pendant lamp? Please let us know through the contact form and help improve the websites exactitude. Your help is much appreciated.
It was in all probability sold by Massive, Belgium.

The Hoyrup company was founded in Christianshavn, Copenhagen, Denmark by Preben Johan Høyrup in the late 1940s. In 1968 Lars Eiler Schiøler became minority shareholder. Lars Schiøler designed almost the complete collection from the 1950s until the 1970s for the company.

Hoyrup created a wide range of stylish modern Danish lights, that were easily-assembled and therefore easy to ship around the world to more than 40 countries. In 1978 the company was split and sold, it became HoyrupLight. It ended business in the mid 1980s. The famous lamps are copied by many companies.

These pendant lamps are almost always attributed to the Rispal company from Paris, France. Rispal produced similar lamps. They are mostly used to restore the famous “mante-religieuse” praying mantis floor lamp designed and made by Georges Rispal in 1950 and in production since 1952. These shades are very often damaged or lost. These lamps were produced with several different lampshades.

Both designer and producer, Georges Léon Rispal is a designer out of category. His creations have entered the history of international design, including its “mante-religieuse” praying mantis floor lamp today considered one of the finest creations of French luminaries from the 1950s.

Lamps in this style on Vintageinfo

Pearlshade pendant lamp (white version of this one)