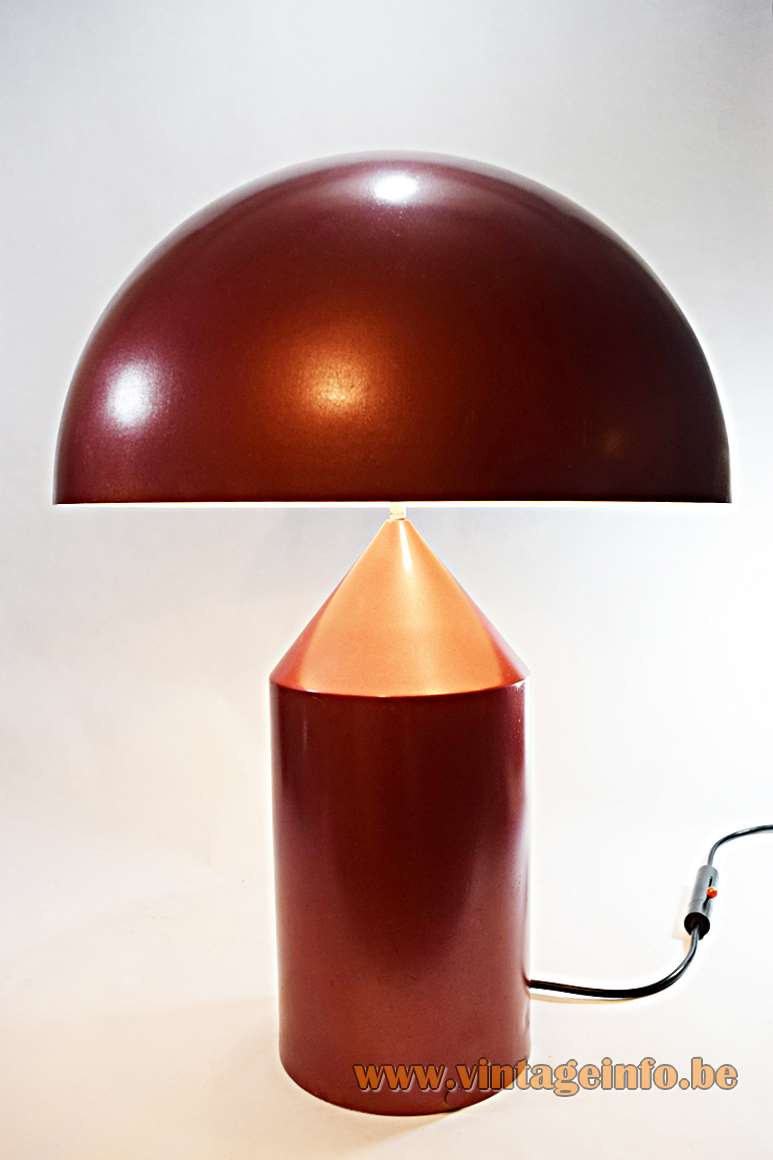 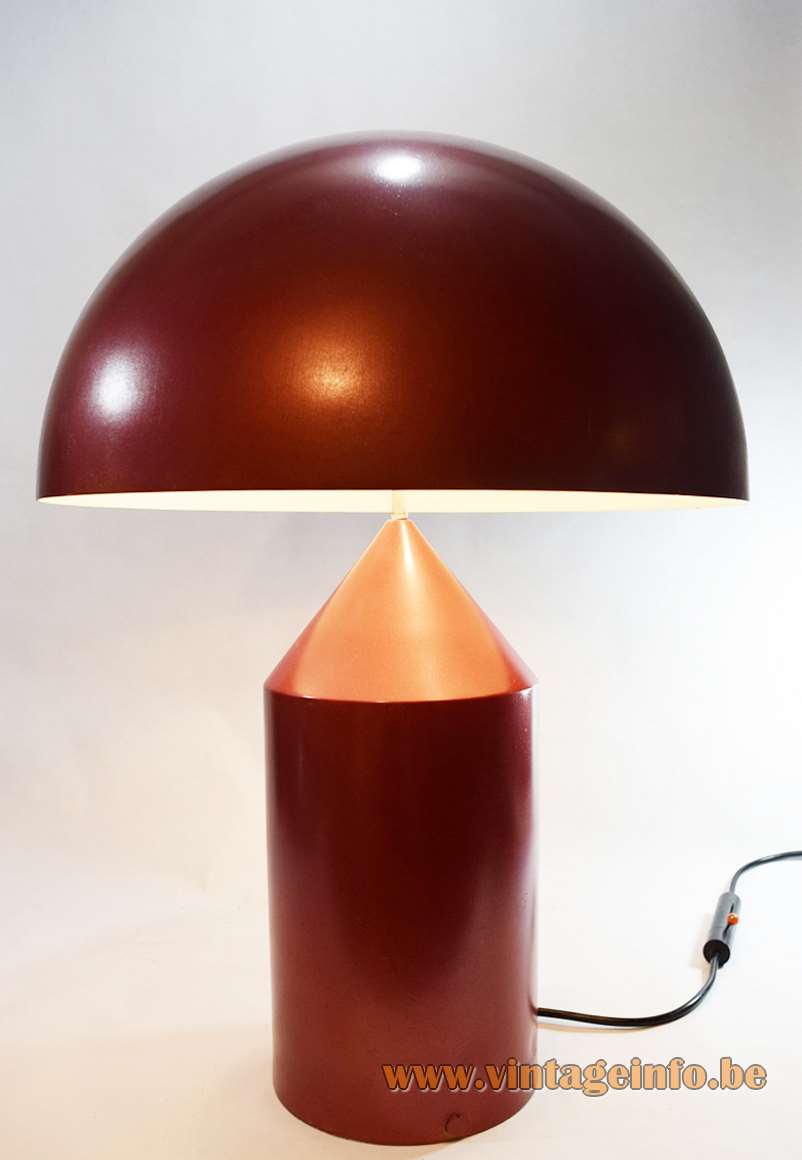 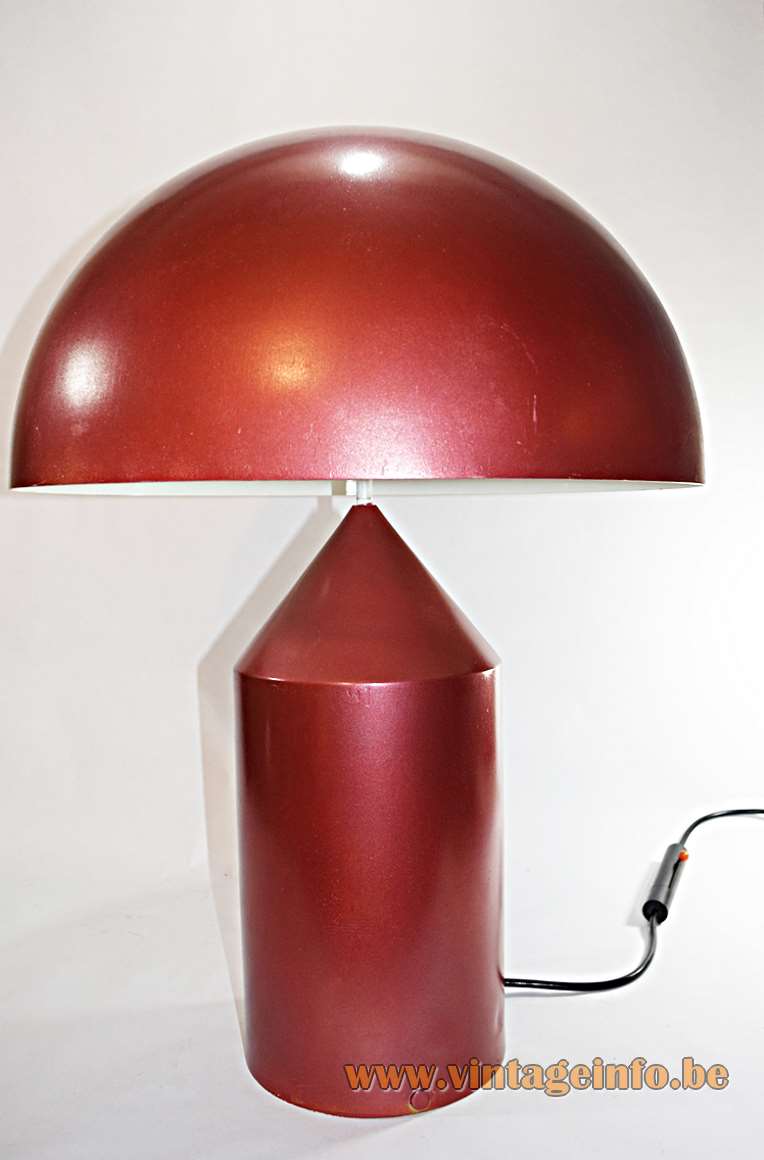 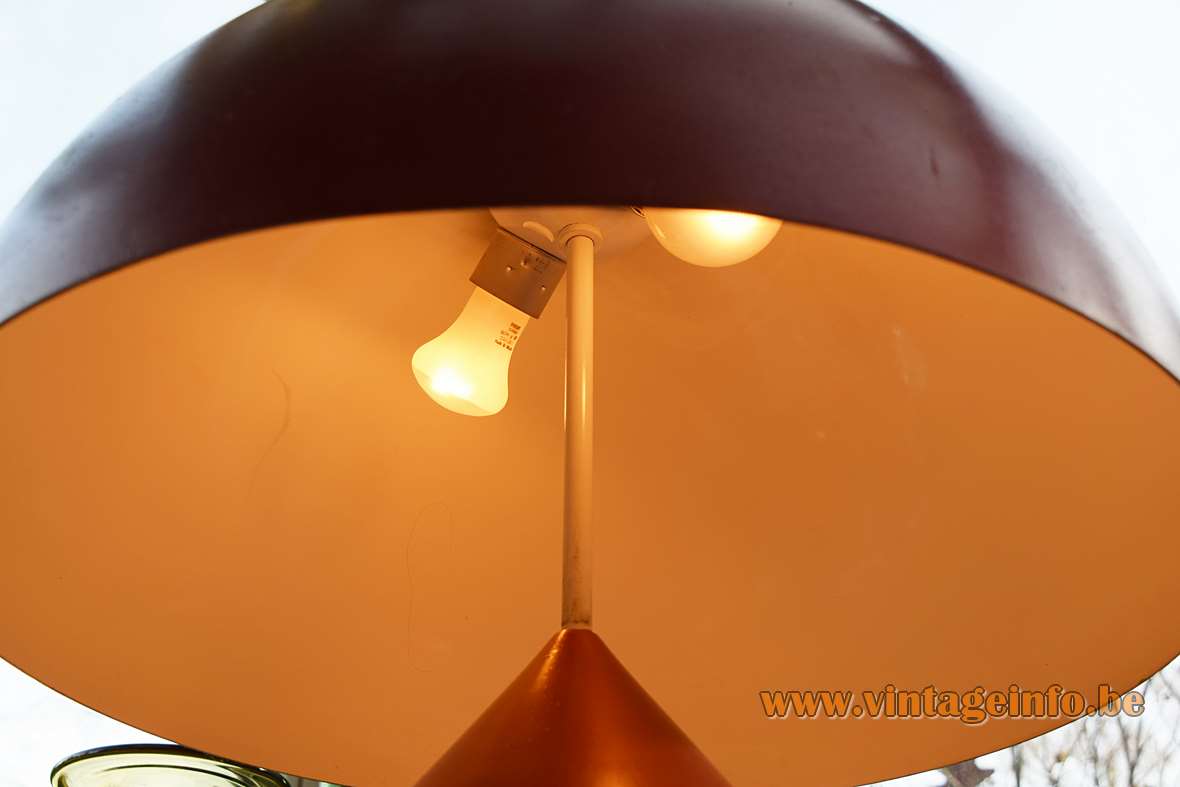 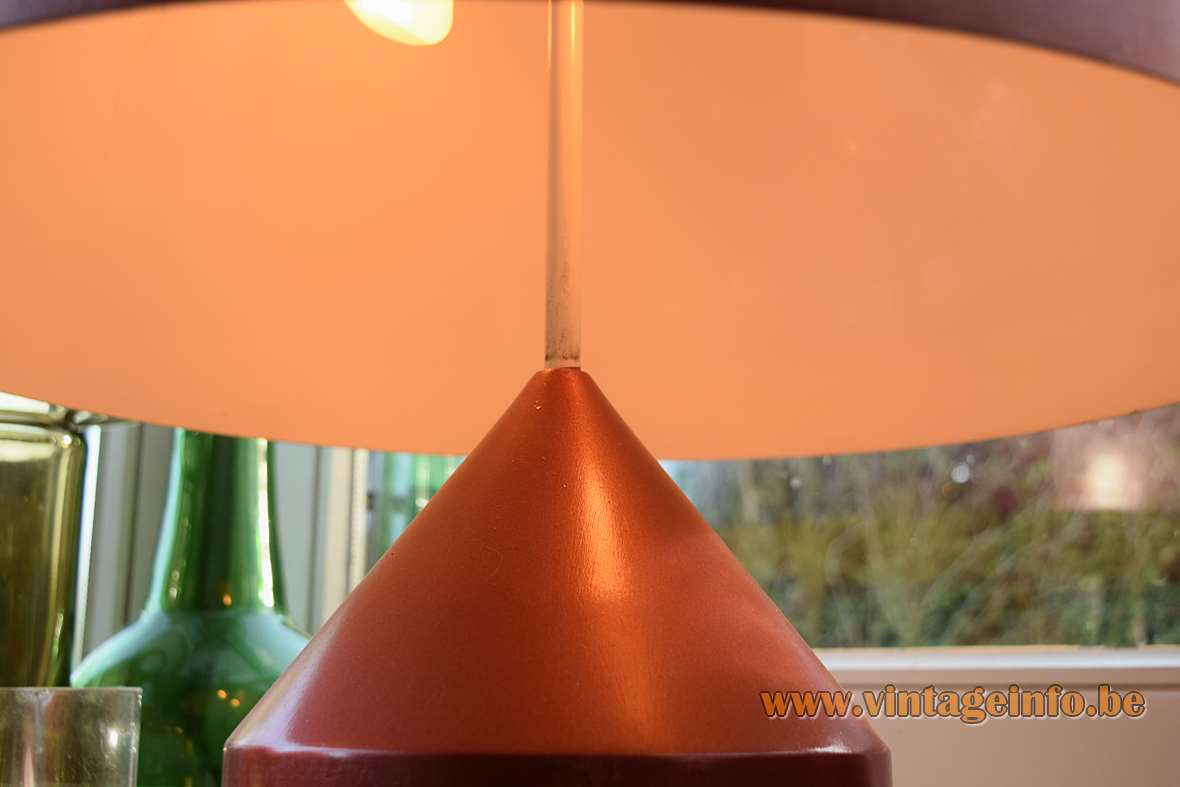 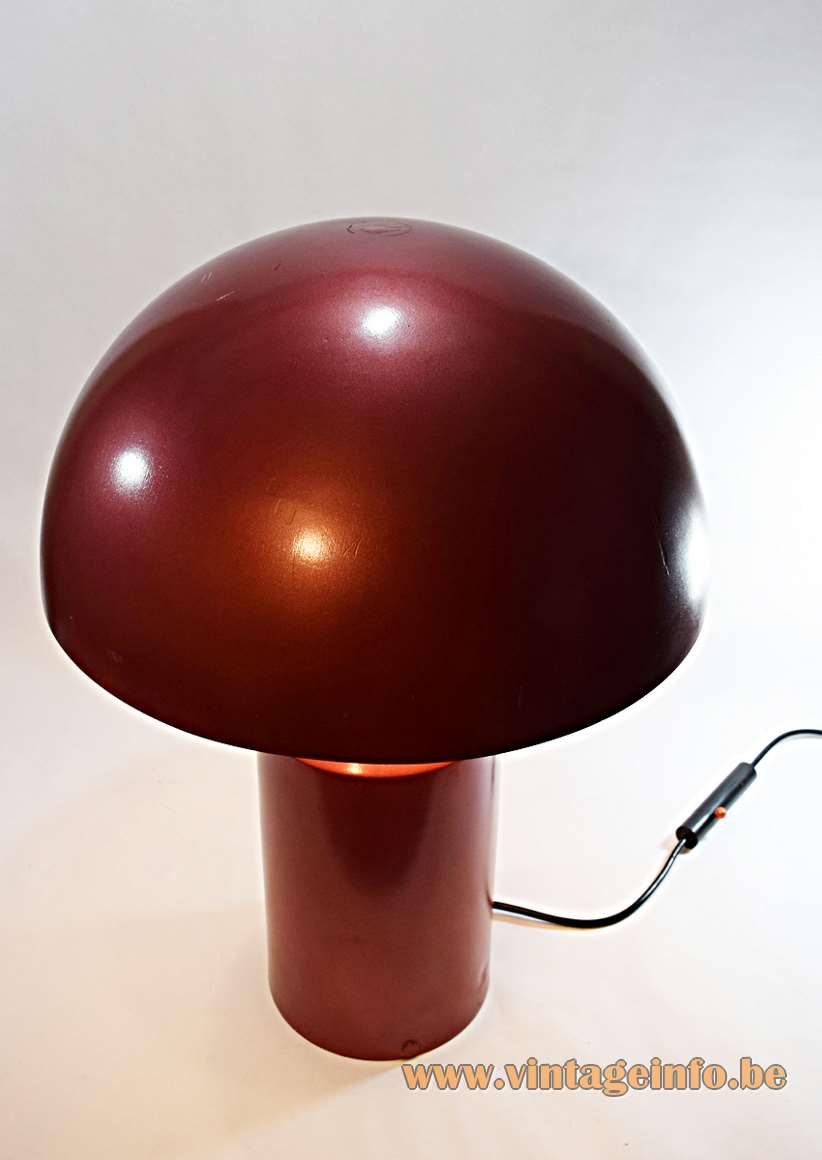 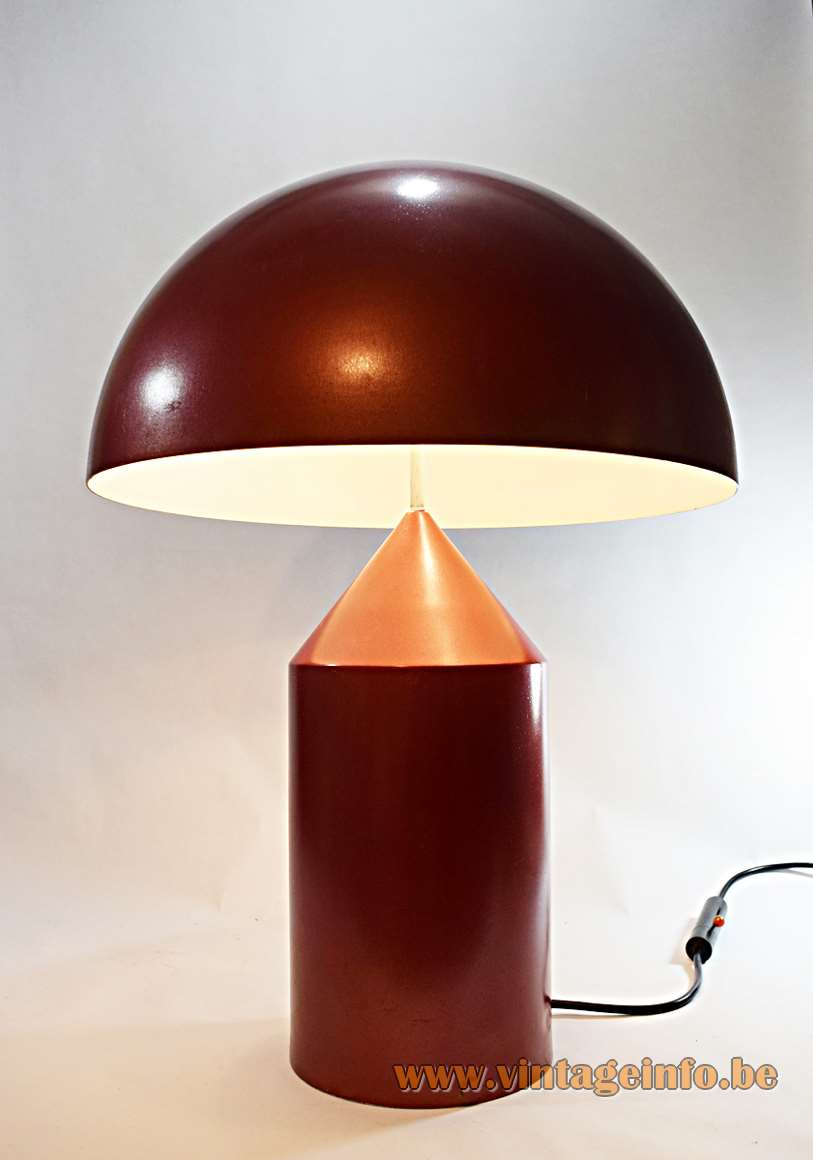 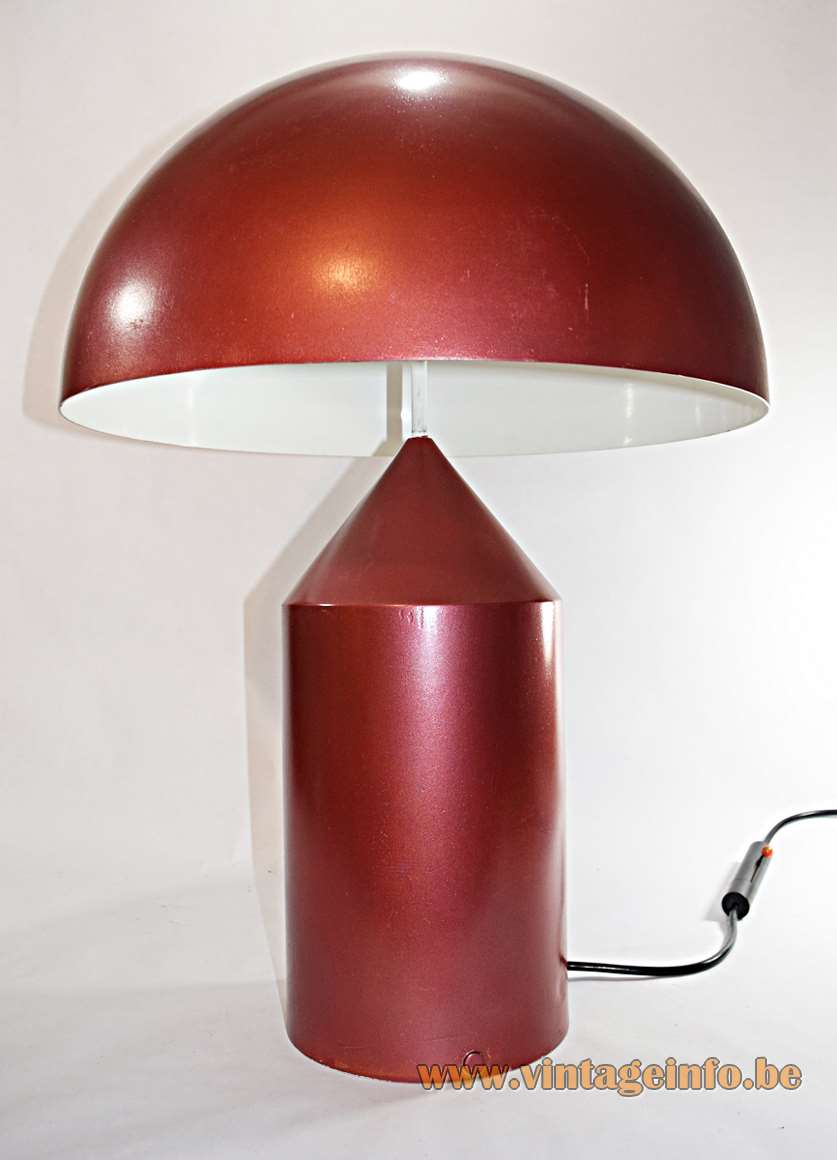 An Oluce Atollo table lamp was used as a prop in Salamander. A Belgian drama television series that was first broadcast on Eén on December 30, 2012. Also broadcast on the BBC, RTBF and Netflix. 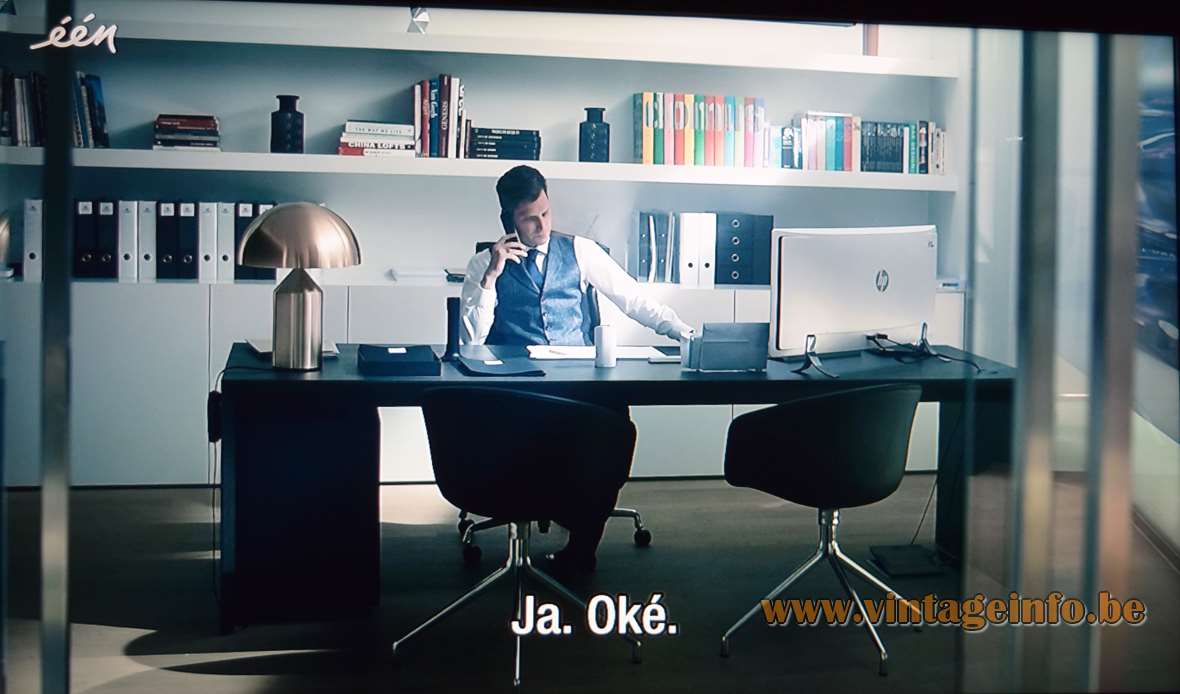 An Oluce Atollo table lamp was used as a prop in The Legend of Red Hand from 2018. A short film by Campari, directed by Stefano Sollima. Starring Zoe Saldana and Adriano Giannini.

Interview with Vico Magistretti on Designboom

The Atollo table lamp at the MoMA Museum New York

Materials: Maroon metallic painted round aluminium base with a conical top. White painted metal rod on top of the base to support the lampshade, made to obtain a floating effect. Maroon metallic aluminium half round mushroom lampshade, painted white on the inside. 2 Bakelite E27 sockets.

Other versions: The Oluce Atollo table lamp was made in several sizes and materials over the years. Recent and new versions are also made in white opal crystal hand blown Murano glass. The lampshade is similar to the shade of the Sonora pendant lamp, designed a year earlier in 1976.

This Oluce Atollo table lamp is an original 1st edition from 1977, model 233. It is equipped with the original tubular dimmer with the red round button. Later versions of the 80s have an orange rectangular one. This table lamp is completely made of aluminium with a white painted brass rod.

This is perhaps Vico Magistretti’s most famous lamp. It most effectively sums up his design approach to this kind of object.

The Oluce Atollo table lamp is composed of two main parts. Firstly, the pattern of simple geometric figures. It seems to translate the old-fashioned lampshade into a small abstract structure. Thanks to its perfectly balanced overall proportions.

The interplay of the light, which is concealed beneath the cap, leaves the latter in the shade on the outside. While it lights up brightly both the inside and upper conical element of the base from which the vertical cylinder emerges.

This creates both direct and indirect light. Which reflects around the surroundings with various degrees of intensity. The bearing structure and cap are connected by a very thin attachment. It makes the cap look almost as if it is suspended in the air.

“The extremely pleasant lighting enhances and is enhanced by the simple geometric form of the overall construction. It has no unnecessary frills or features. This characterises most of Vico Magistretti’s lamps. Elegant proportions and stylistic composure make them perfect “domestic characters”.”

For many years, Magistretti was art director and chief designer of the Oluce company. Conferring his unmistakable stamp and a legacy of worldwide recognition. Kuta, Lester. Nara, Idomeneo, Pascal. Dim, Sonora. Snow, and especially Atollo – all became names that instantly called to mind the corresponding product. Atollo even became a sort of template. A graphic silhouette that immediately rendered the concept of a “lamp”.

Visit the studio museum and discover more about Vico Magistretti work as designer and architect. The studio museum is open on Tuesday, Thursday and Saturday. More info on the website of the museum. http://www.vicomagistretti.it/en/museum/practical

“Designed by Vico Magistretti in 1977, it was awarded the Compasso d’Oro in 1979. It became, since then, part of the permanent collections of the world’s major museum of design. As well as part of the furniture of many homes of those who love and are able to select the things surrounding them.
Atollo’s secret probably lies in the geometrical construction of its shapes: the cone on the cylinder and the semi-sphere above all. A luminous sculpture from which nothing can be removed to which nothing can be added. And which nothing can copy.”

The complete history of Oluce can be found on their website.

Drawing taken from the Dutch 1982 book: Chriet Titulaer – Computers. Wat moet je er mee? (Computers. What should you do with it?)  – The office of the future has a computer on every desk (in the year 2000). 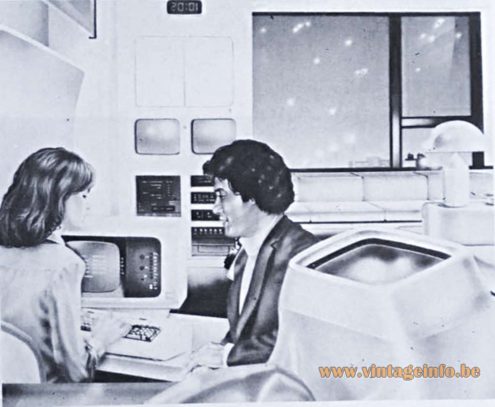 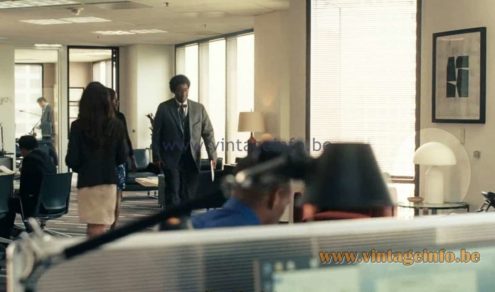 An Oluce Atollo table lamp was used as a prop in the 2014 action thriller film The November Man. Starring Pierce Brosnan, Luke Bracey and Olga Kurylenko.

An Oluce Atollo table lamp was used as a prop in the 2009 political thriller film The International.  Starring Clive Owen and Naomi Watts. 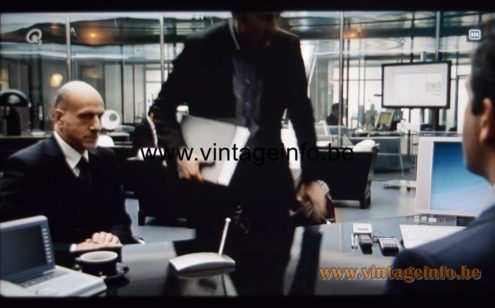 An Oluce Atollo table lamp together with a Panthella floor and table lamp were used in Belgium and The Netherlands for an Auping publicity on their website in 2019. 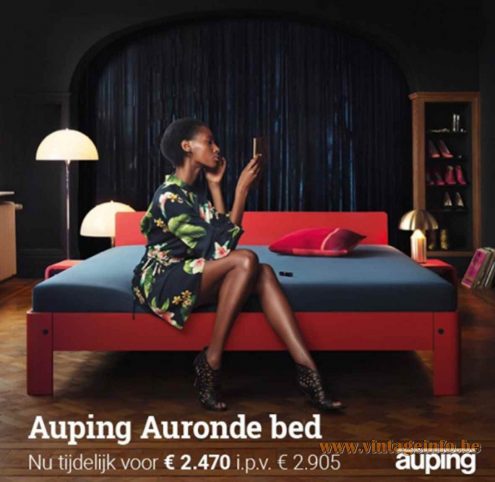