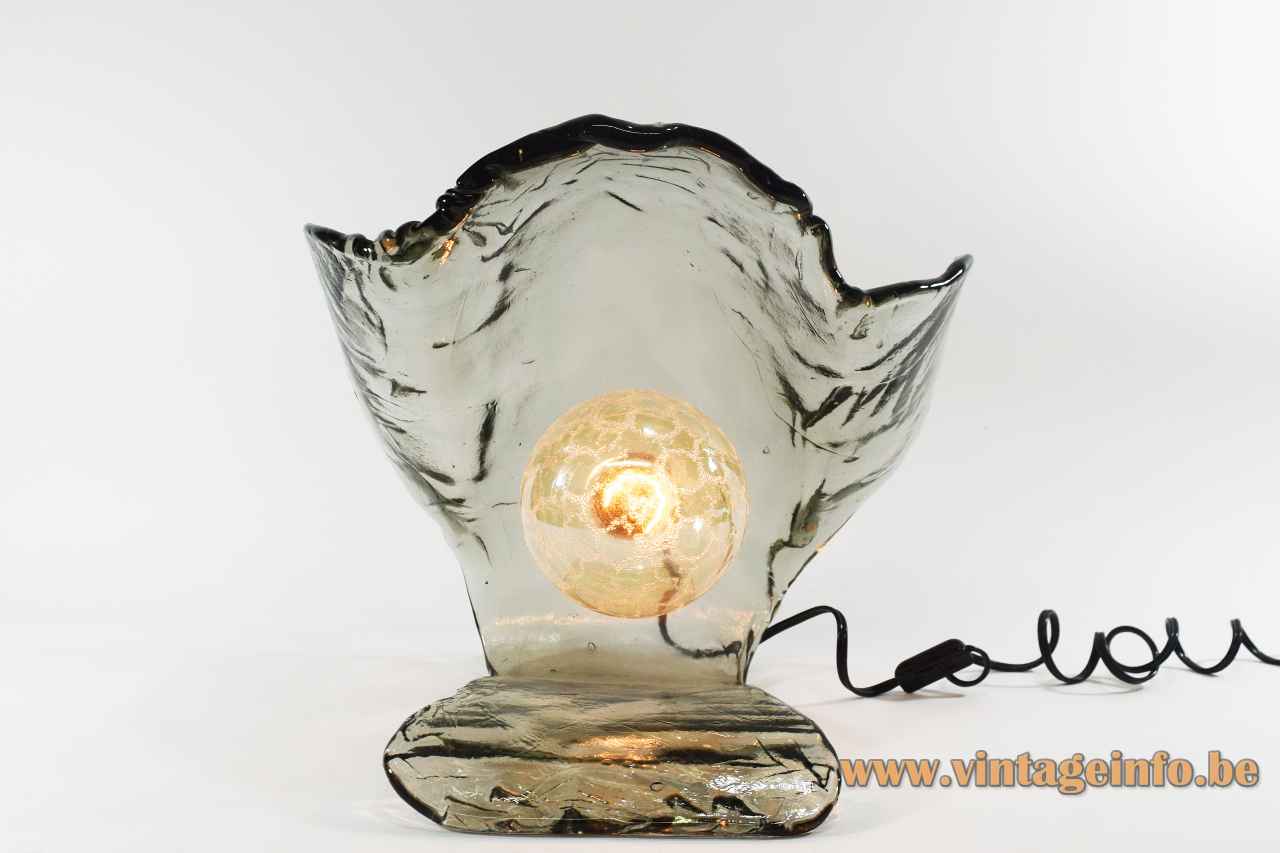 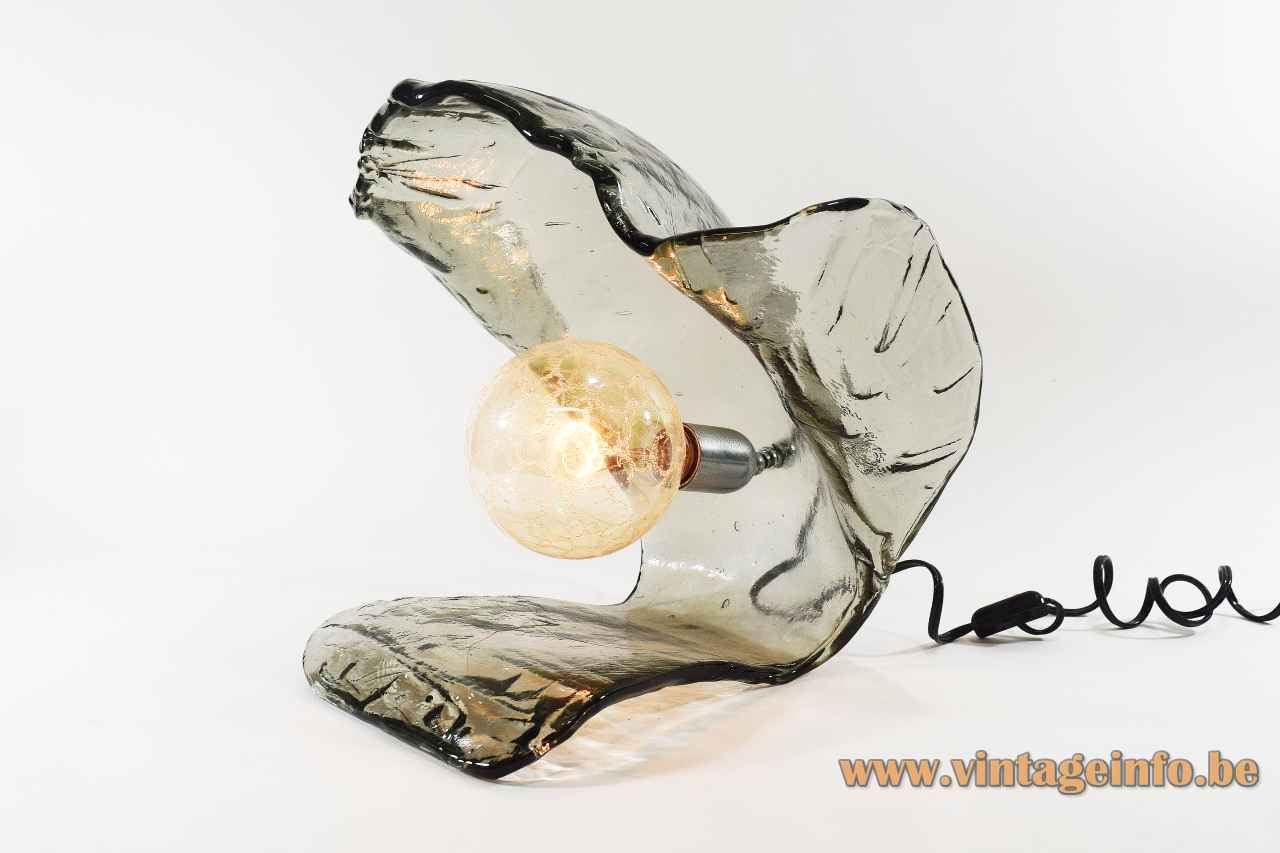 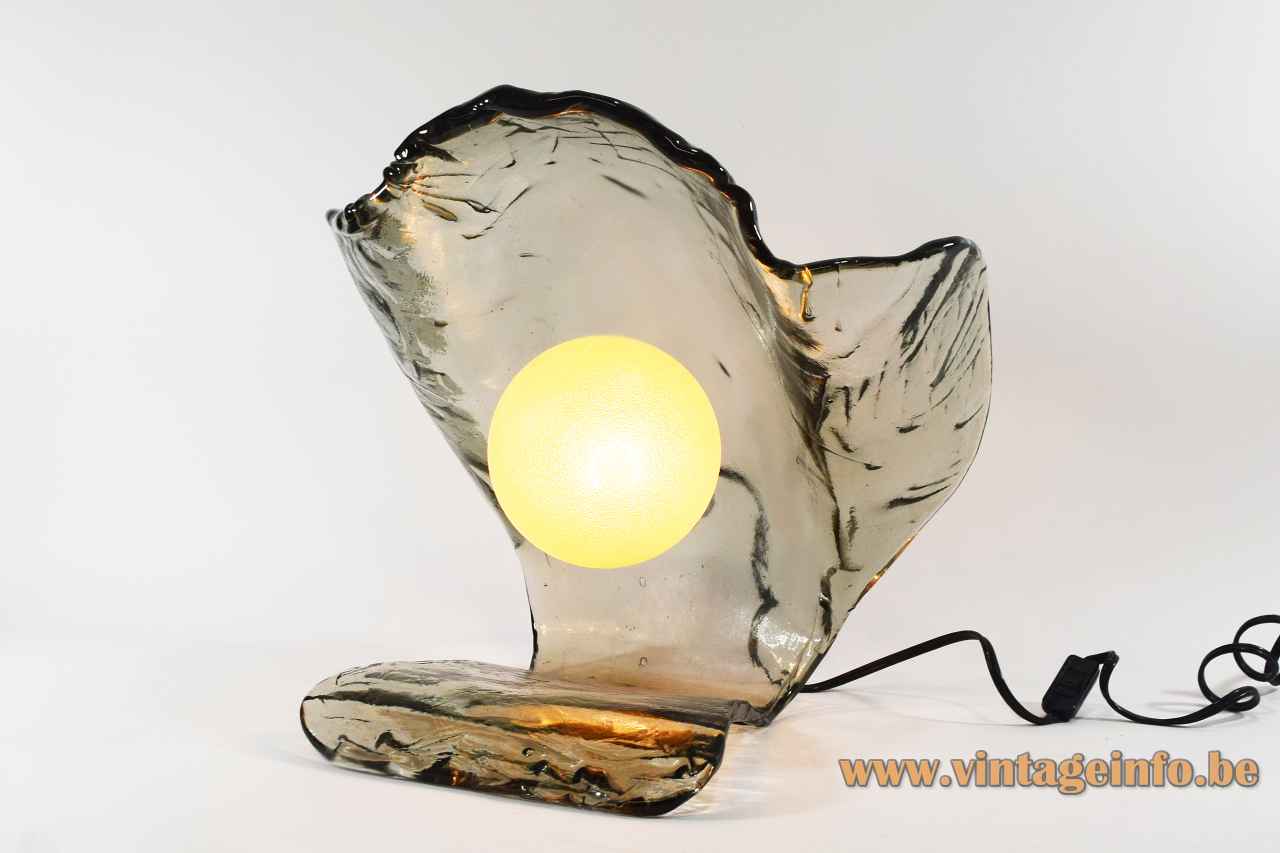 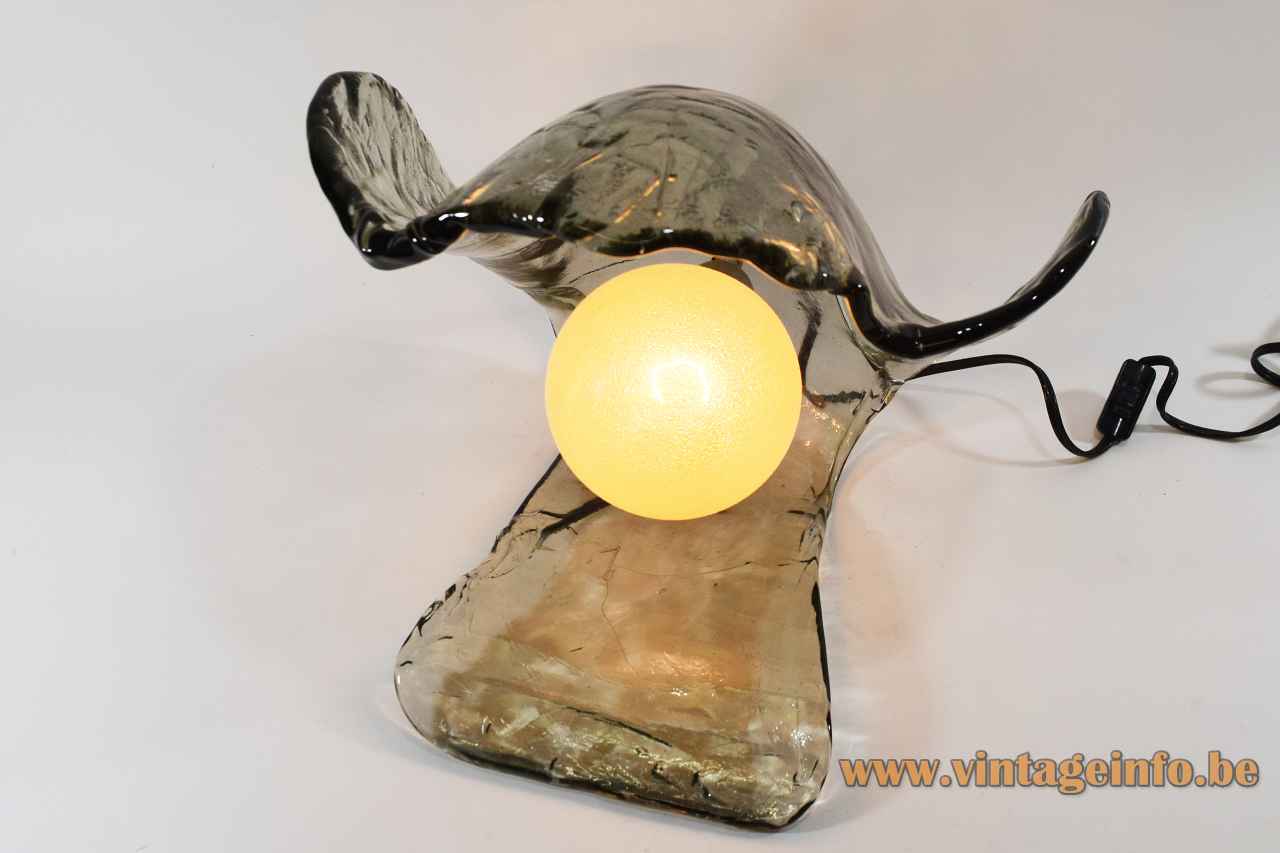 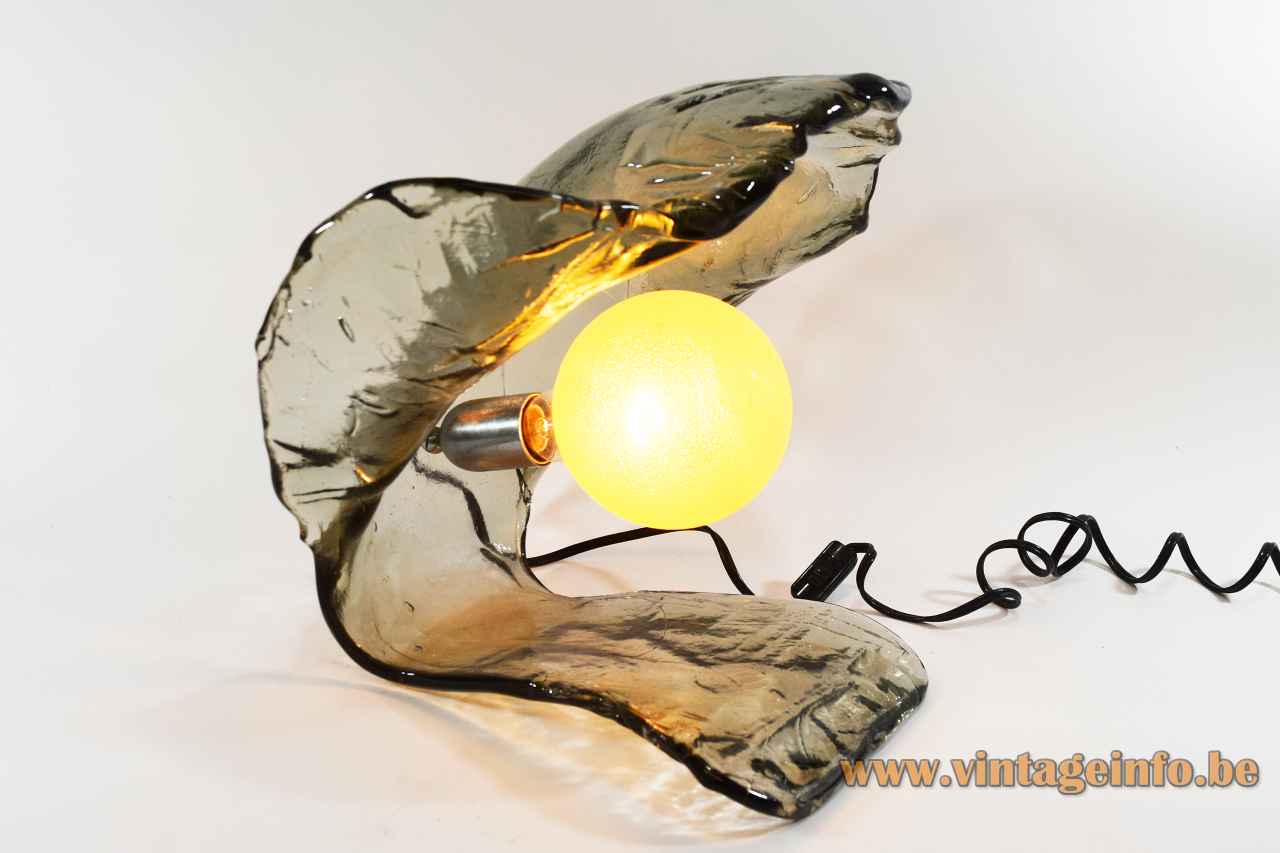 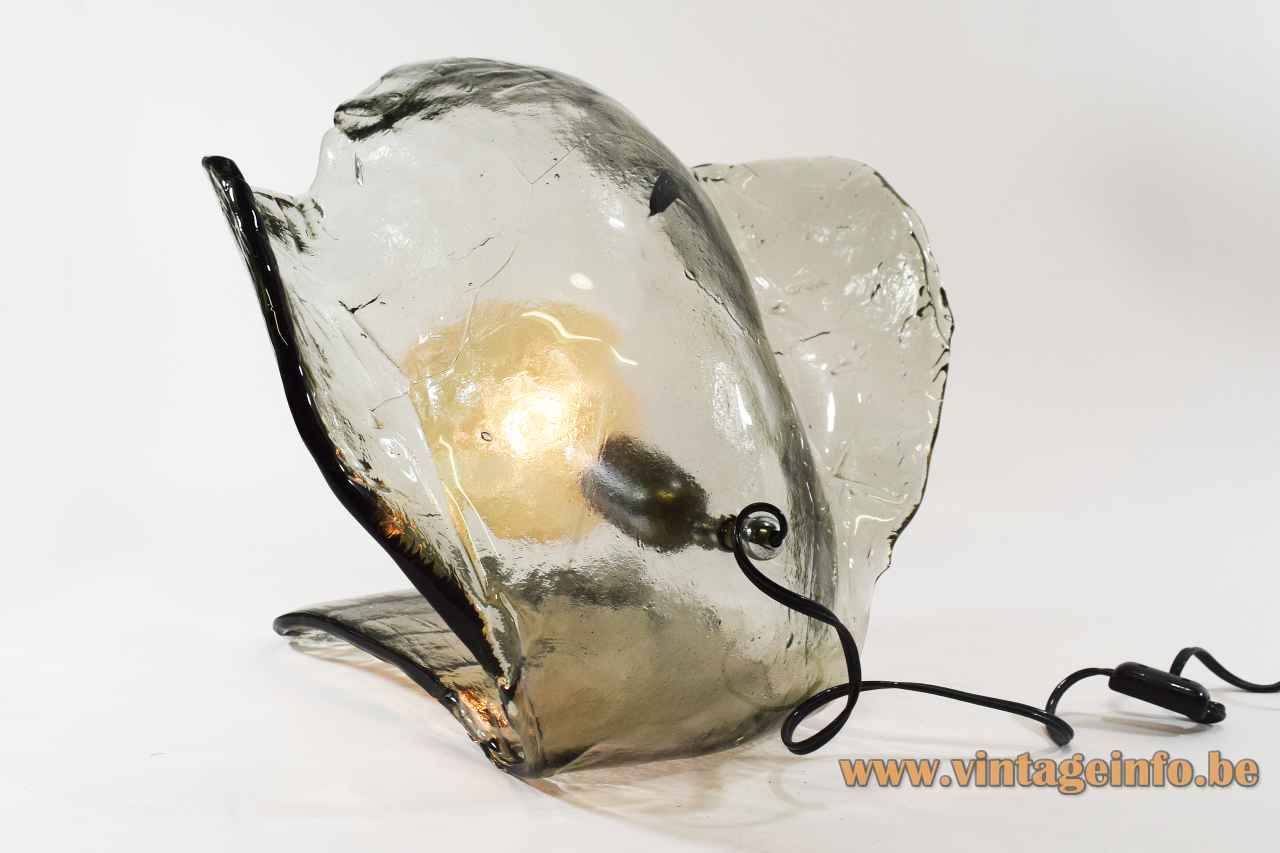 The same lamp at Catawiki

Electricity: 1 bulb E27, 1 x 75 watt maximum, 110/220 volt.
Any type of light bulb can be used, not a specific one preferred. For this setup special type of globe light bulbs were used.

Other versions: This 1970s manta table lamp exists in all probability in one version.

It was told, but without any proof unfortunately, that this lamp not only was designed, but also made by Tony Zuccheri at the La Murrina glass furnaces. Although the colour of this table lamp is in a typical La Murrina and AV Mazzega colour, it lacks the La Murrina seal or label. However, table lamps in this style with the La Murrina seal exists. Also the Austrian Kalmar Franken company used this colour and type of glass for several lamps. The glass was made by Leucos.

The same lamp was sold at Catawiki in 2021 and was named by the seller: “Manta, the giant of the sea”. It was acquired from a design studio in Milan, Italy, and was used at their main office. On 1stdibs it is sold as a Carlo Nason “attributed” lamp. I’m afraid it is none of the above.

He took an interest in glass, and since his early twenties in the 60s he worked at Venini were he invented and reinvented working techniques, shapes and colours. His first glass works for the company are, due to the family tradition, animals made of poly-chrome glass. He personally produced prototypes, following the artisans in carrying out the work. The result was complex works, unique pieces characterised by a direct and evoked naturalness. Toni Zuccheri passed away in 2008.

The La Murrina company was founded in the 1960s as a small business started by a group of glass-worker masters. In 1974, La Murrina was bought by a family from Milan. Today they are located at Via Isonzo, 26, 22078 Turate (Co), Italy. The furnace is still on the Murano island and located at Riva Longa, 17 – Murano Venice, Italy.