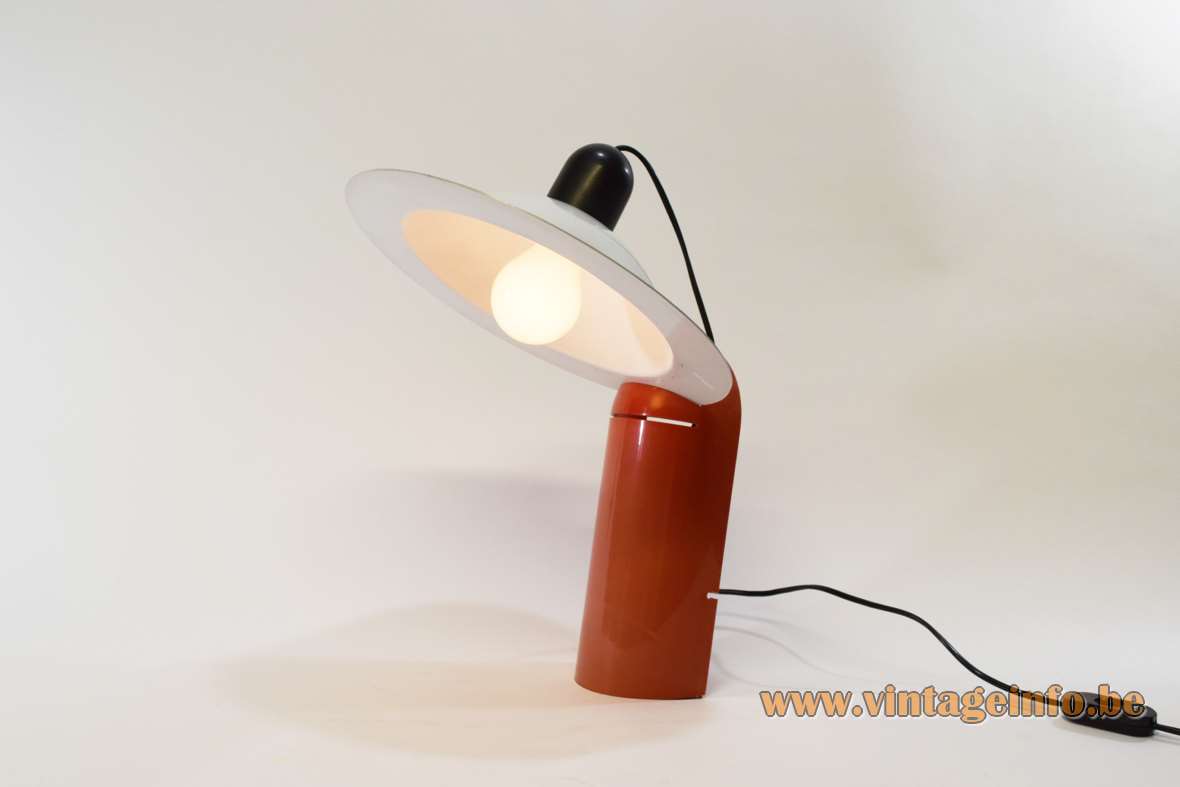 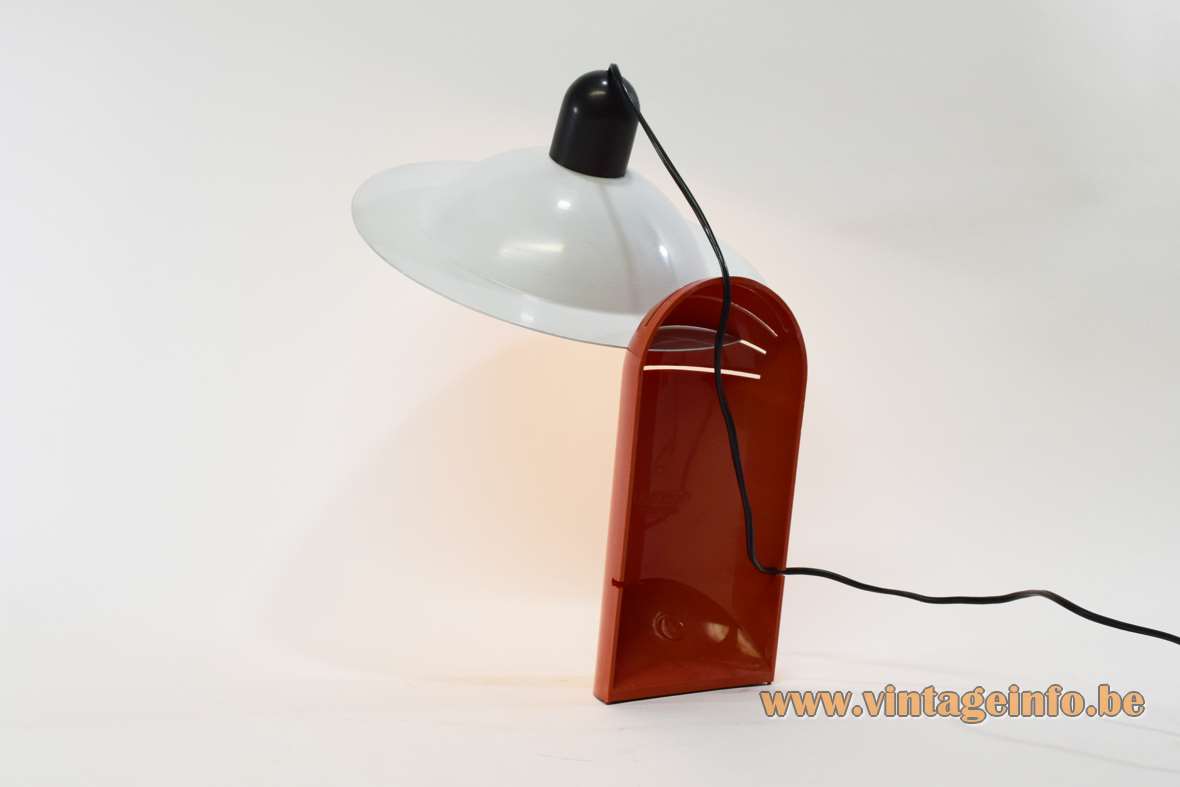 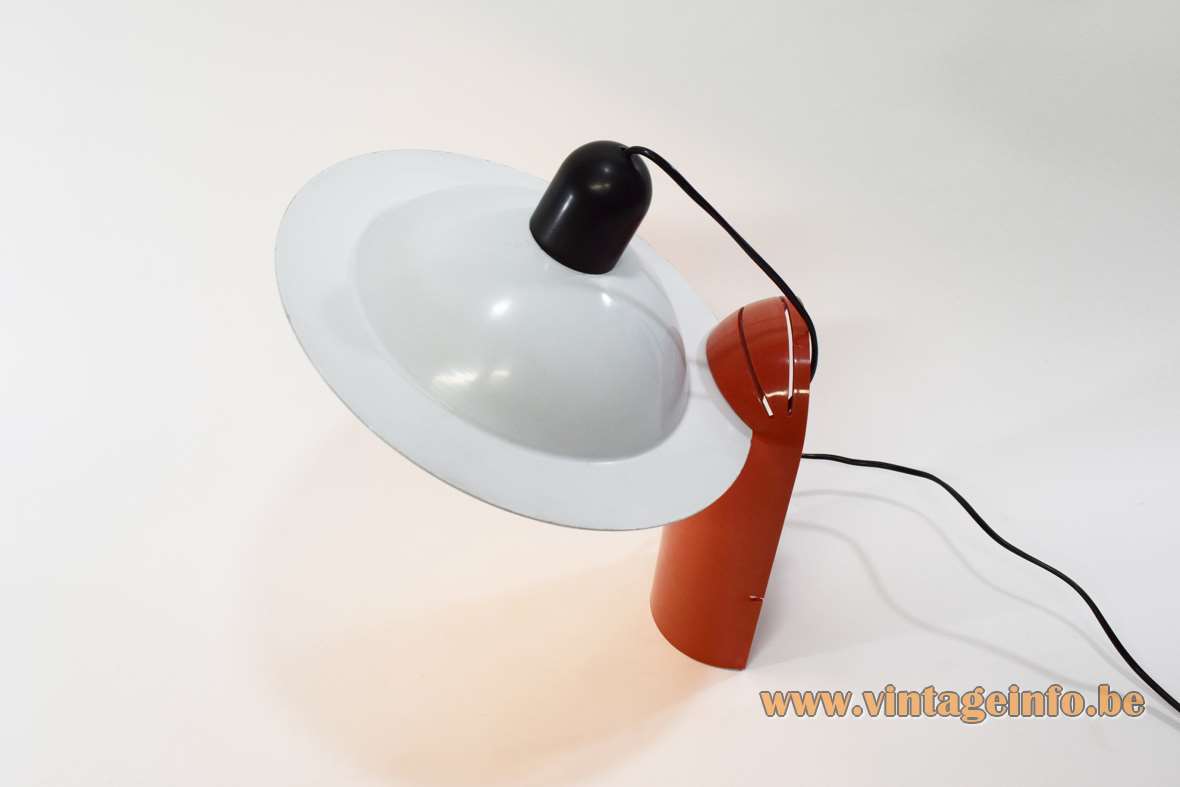 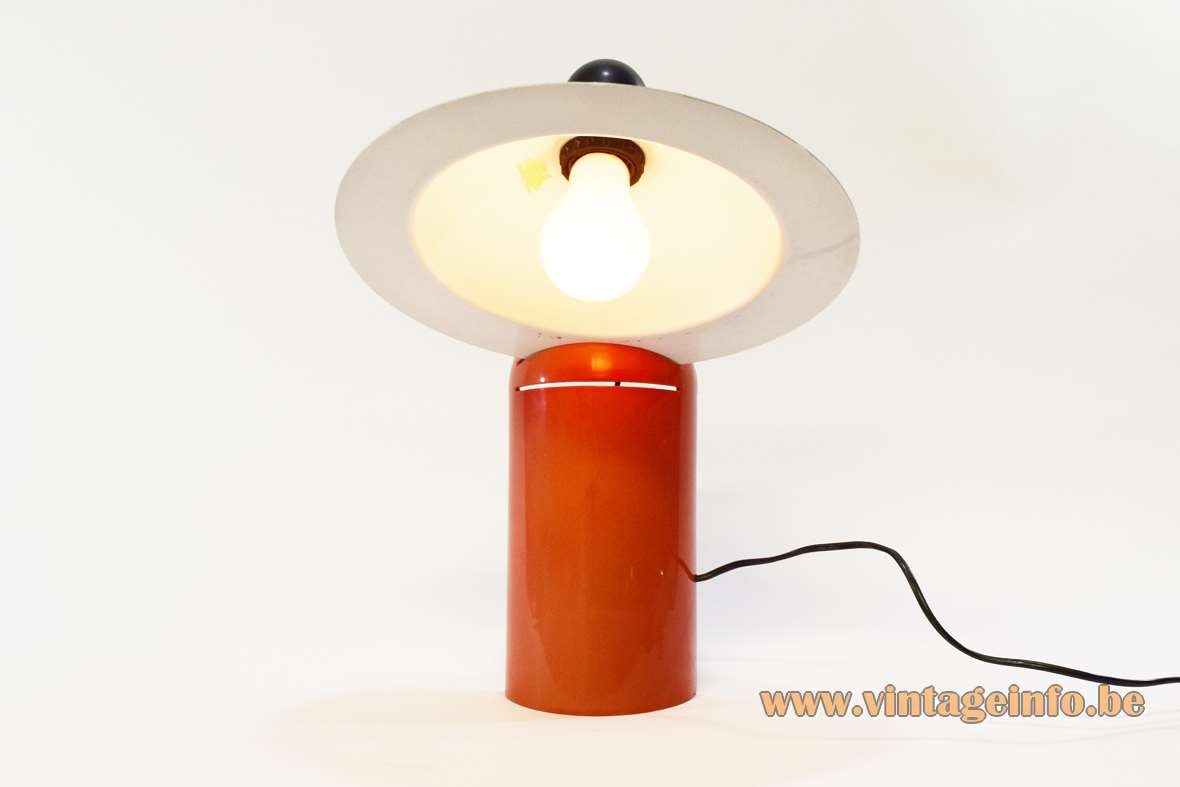 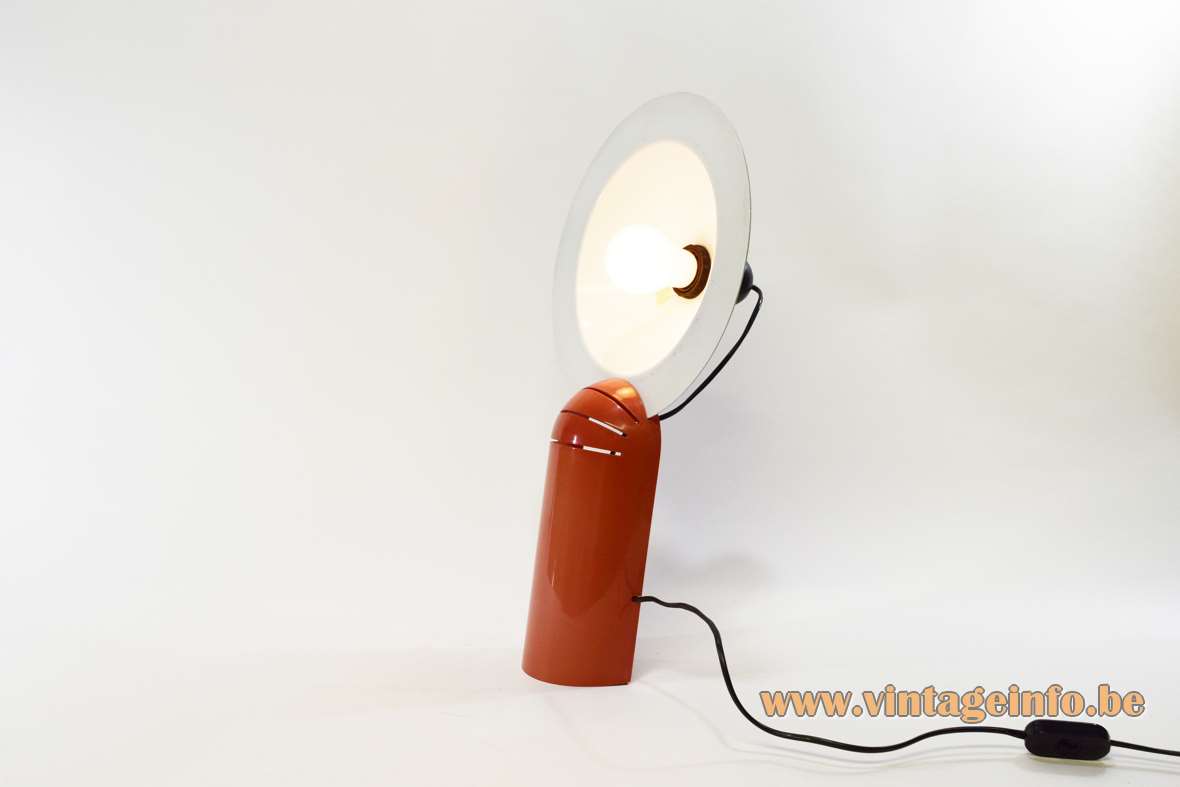 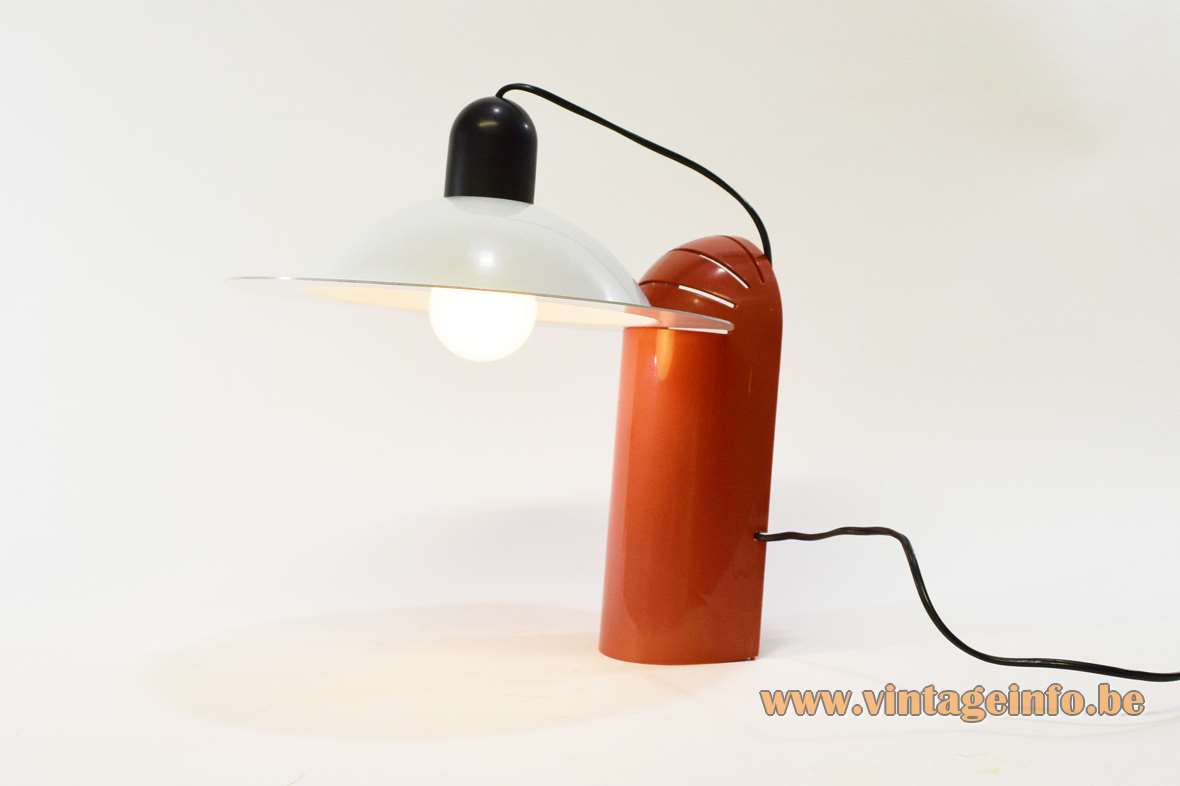 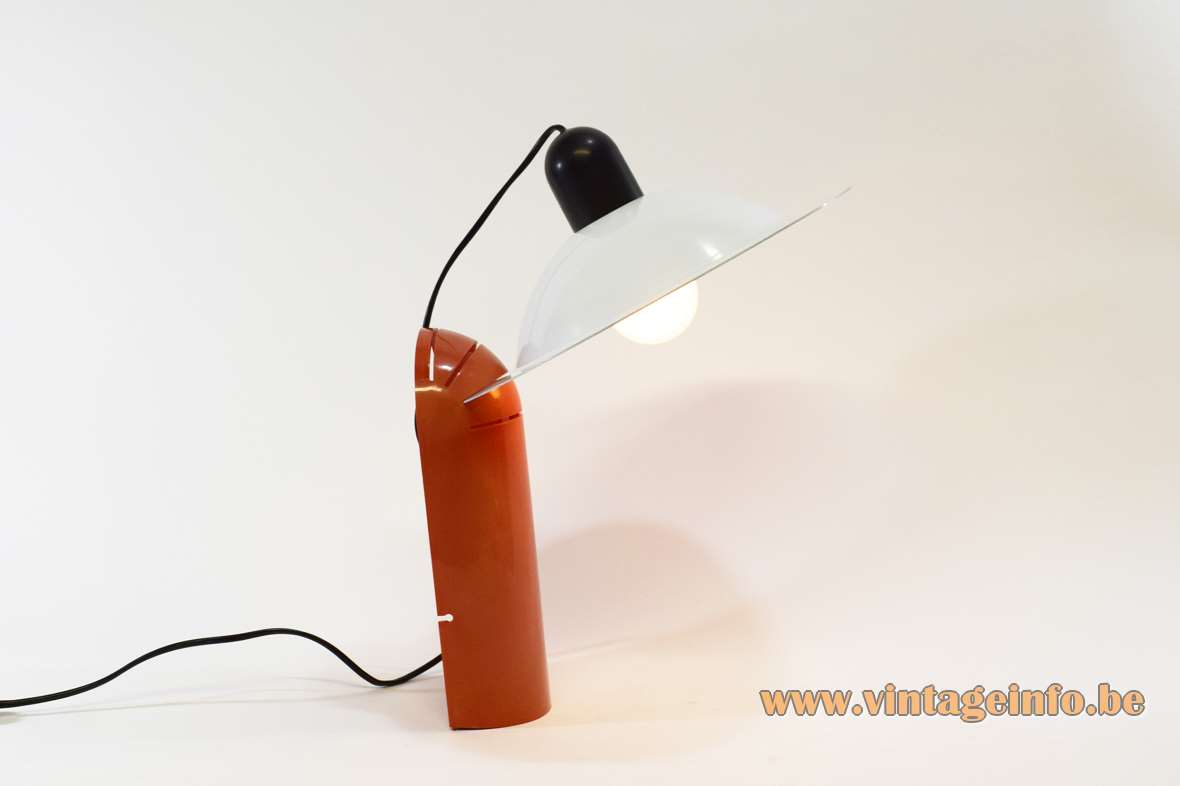 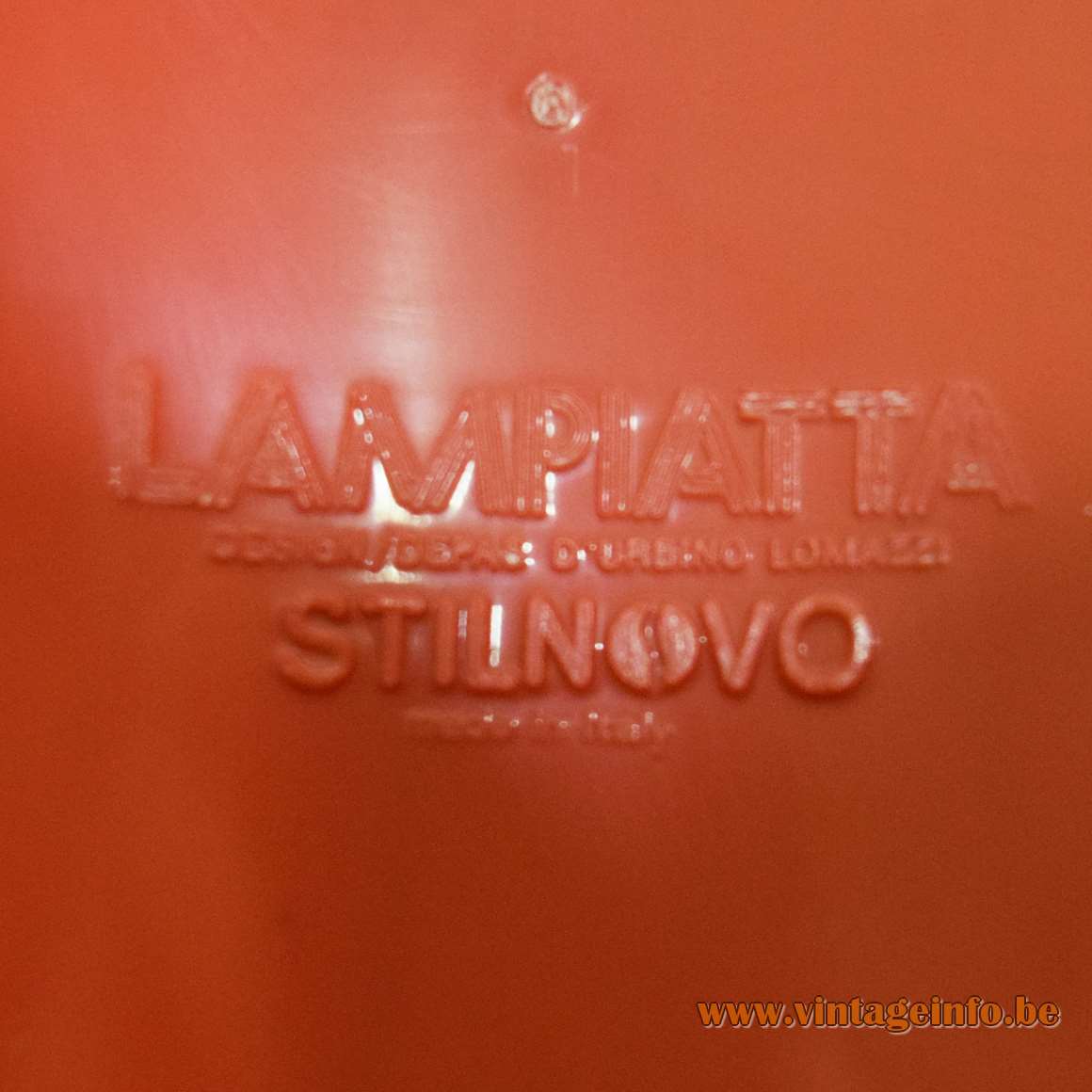 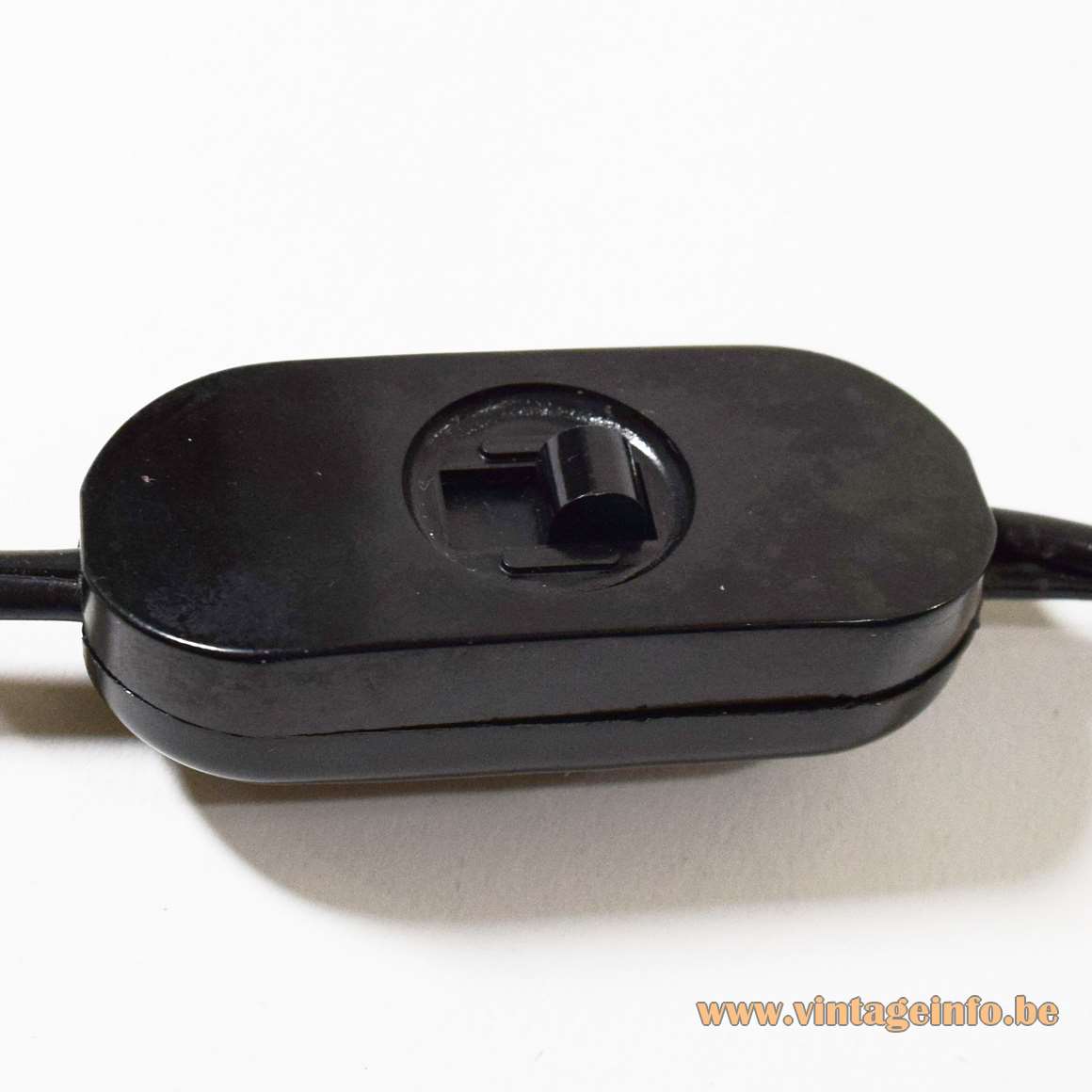 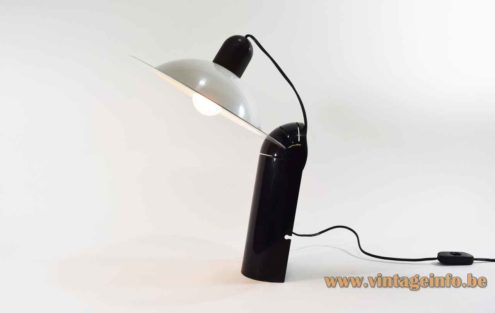 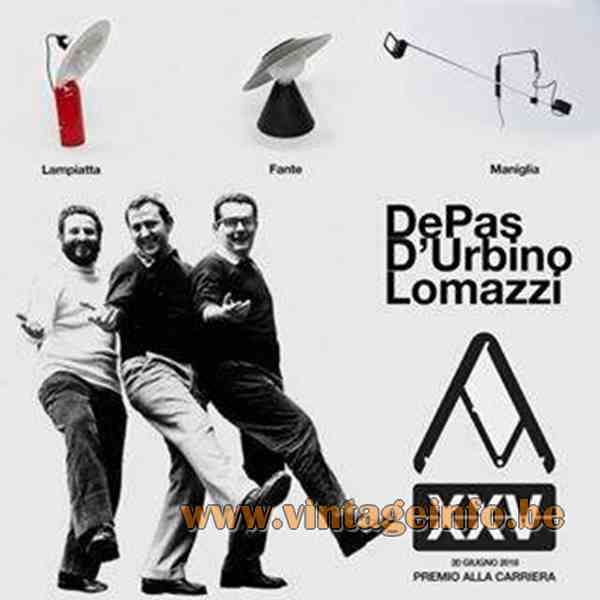 Other versions: The Stilnovo Lampiatta table lamp or desk lamp exists in black, white and red. Also made as a pendant lamp in two sizes. Early versions have a VLM switch 450, designed by Achille Castiglioni. Later editions have different switches, all made by VLM.

The Lampiatta table lamp was produced for many years, probably until the end of the Stilnovo company as we can learn from the switches that were used. Since 2017 the lamp is back in production in a slightly different size by the new Stilnovo company.

The Lampiatta table lamp can also be used as a wall lamp. A recess is provided.

The base is marked on the inside (moulded) with “Lampiatta, design De Pas d’Urbino Lomazzi, Stilnovo, Made in Italy”.

A table or desk lamp with a similar lampshade also exists. It was also designed by this trio for Stilnovo. It has a chrome curved rod. You can find it over here on Vintageinfo.

Jonathan De Pas (1932-1991), Donato D’Urbino (1935) and Paolo Lomazzi (1936) started working together in 1966 when they founded their design studio DDL – De Pas, D’Urbino, Lomazzi in Milan, Italy. After the death of Jonathan de Pas in 1991, the DDL design studio became Studio D’Urbino Lomazzi. The trio is most famous for their furniture design. The inflatable Blow armchair for Zanotta and the seat Joe for Poltronova in the shape of a baseball glove, to name a few. It was a tribute to the famous American baseball player Joe di Maggio.

Their works are present in exhibitions and museums of all over the world, from the Triennale Design Museum in Milan to the MoMA in New York. Studio D’Urbino Lomazzi had a website, it is gone since 2018. It was located at: www.durbinolomazzi.it. The studio was located at Corso XXII Marzo 39, Milan. In 2018, the ADI (Association for Industrial Design) awards designers Donato D’Urbino and Paolo Lomazzi with the Compasso d’Oro career award.

All the electric parts were made by VLM Components. VLM Components was founded in 1945 in Buccinasco, a small village near Milan, Italy. VLM Components is part of the Relco Group, founded in 1967. Today they are the owners of the brands Relco, Leuci, Relco Lighting, VLM Components and Segno. The switch on this table lamp is model 450; the small model of the famous switch designed by Achille Castiglioni in 1968.

Many thanks to Tinneke for the black lamp.