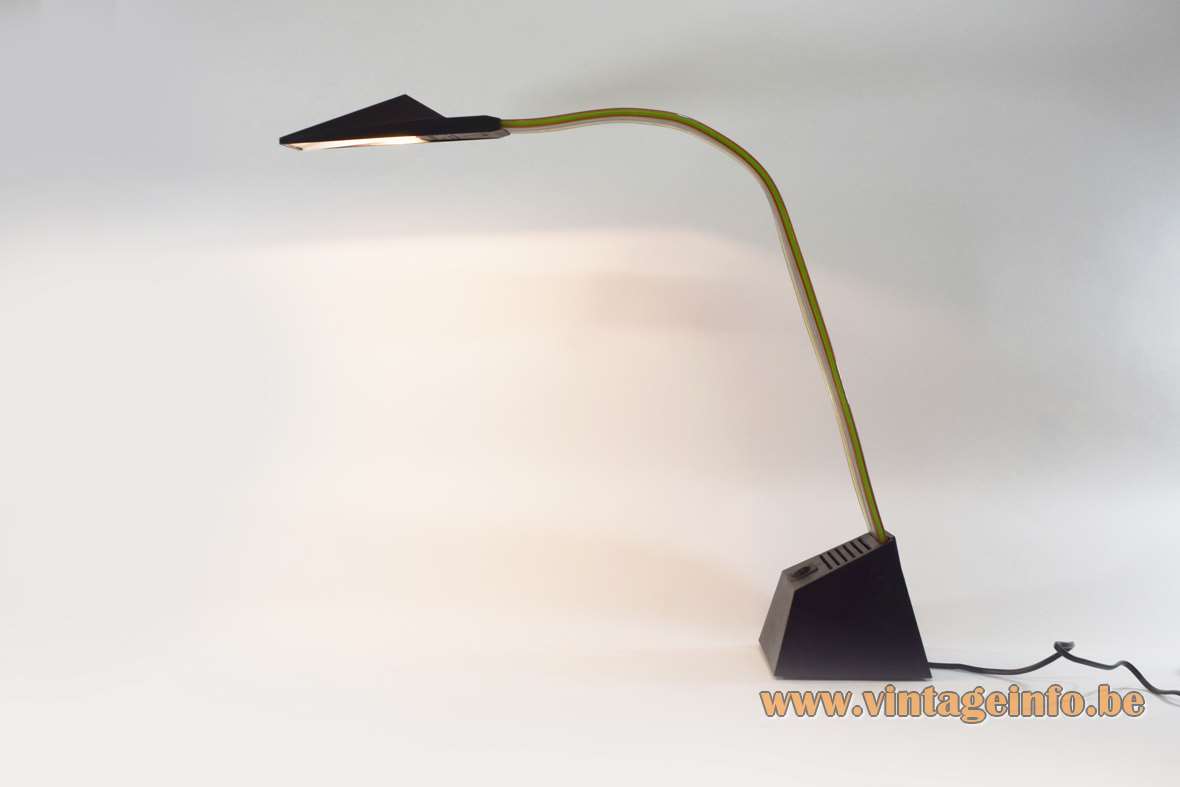 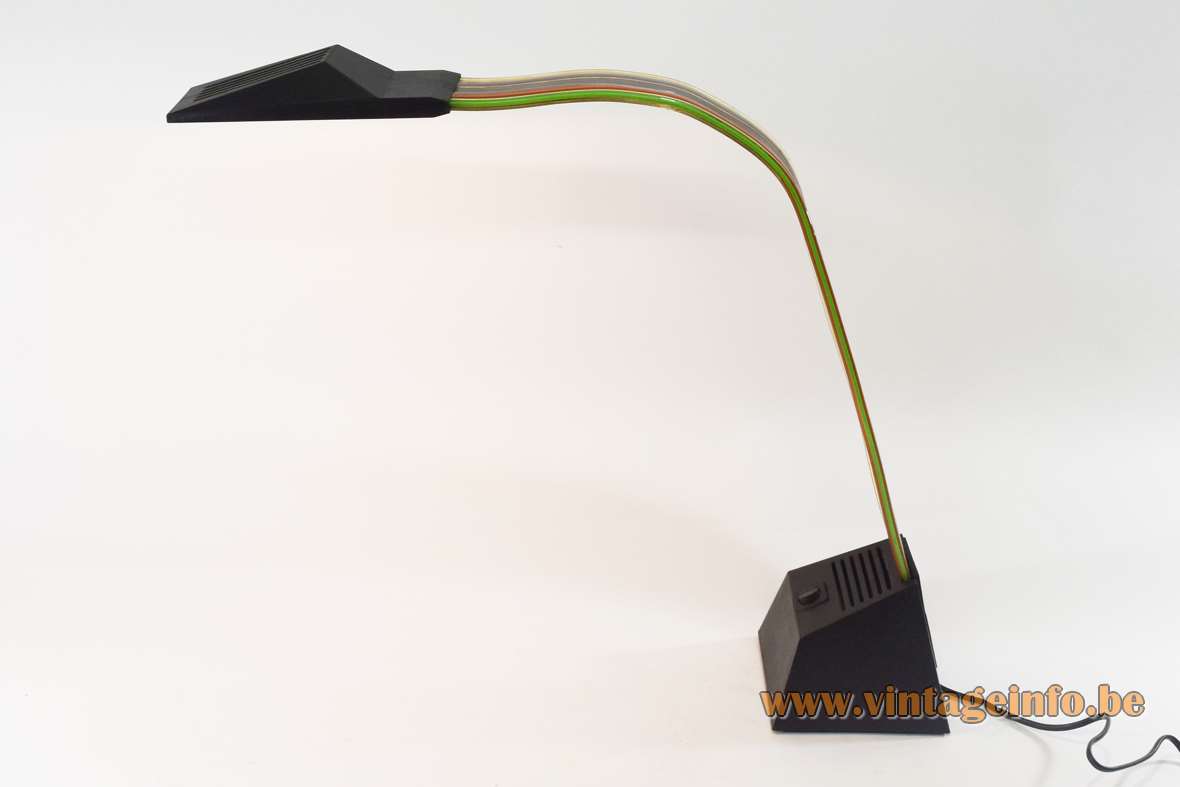 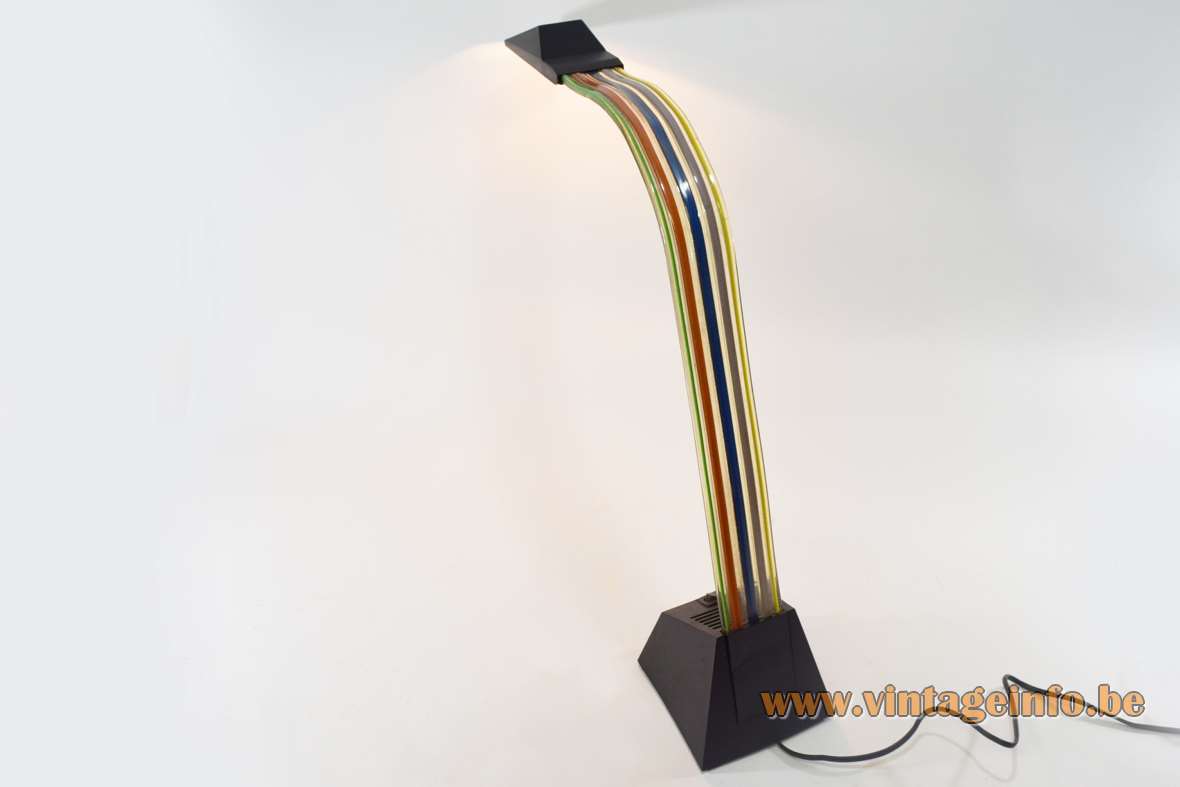 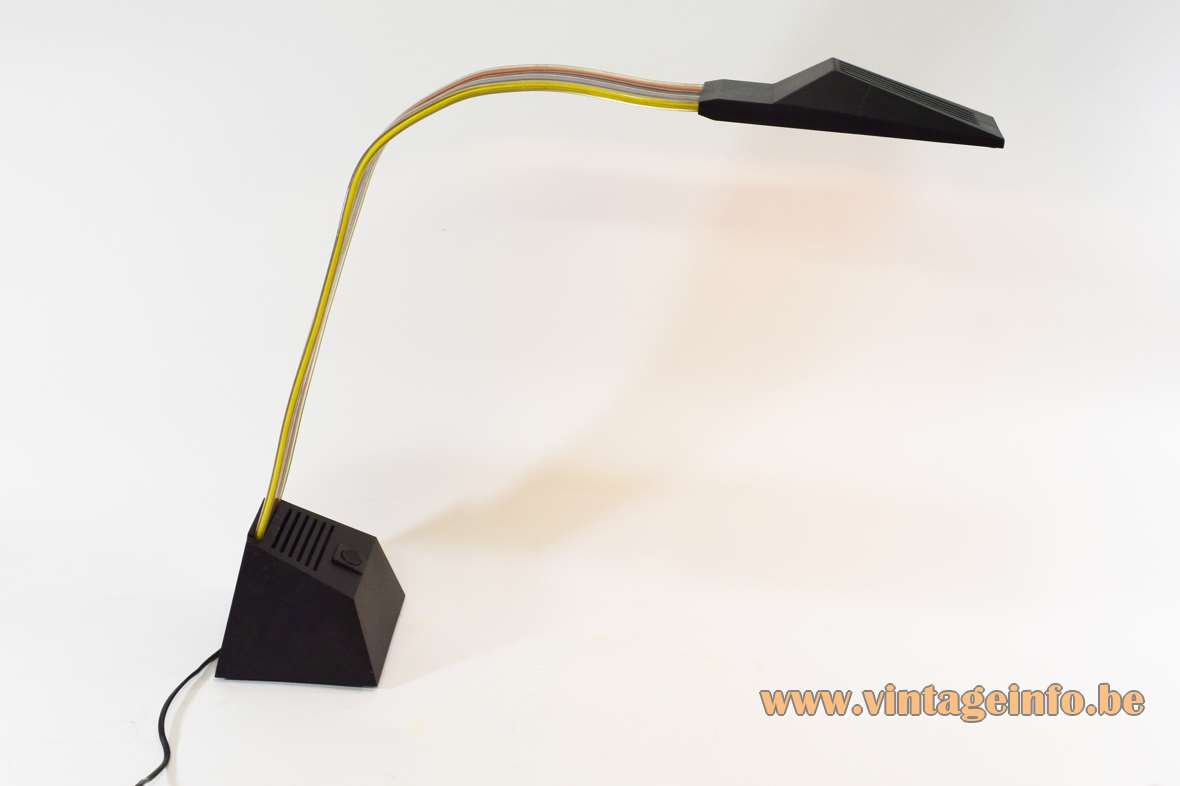 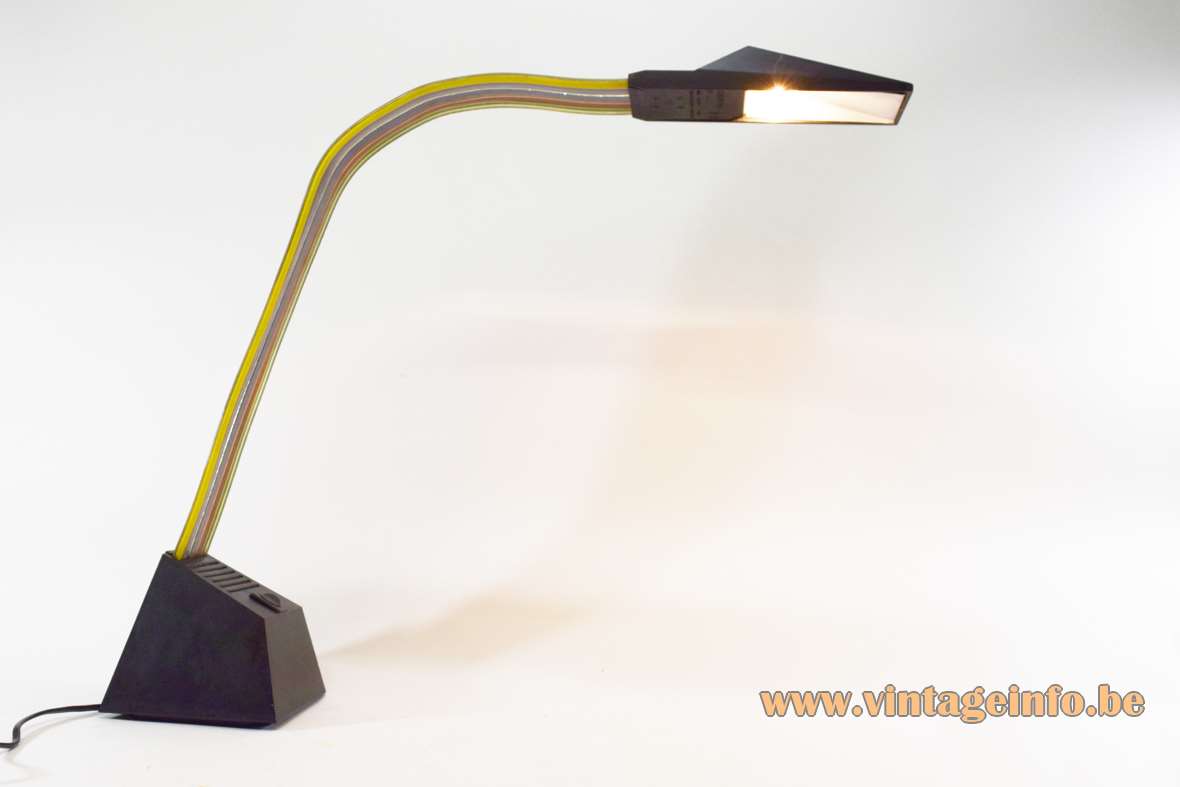 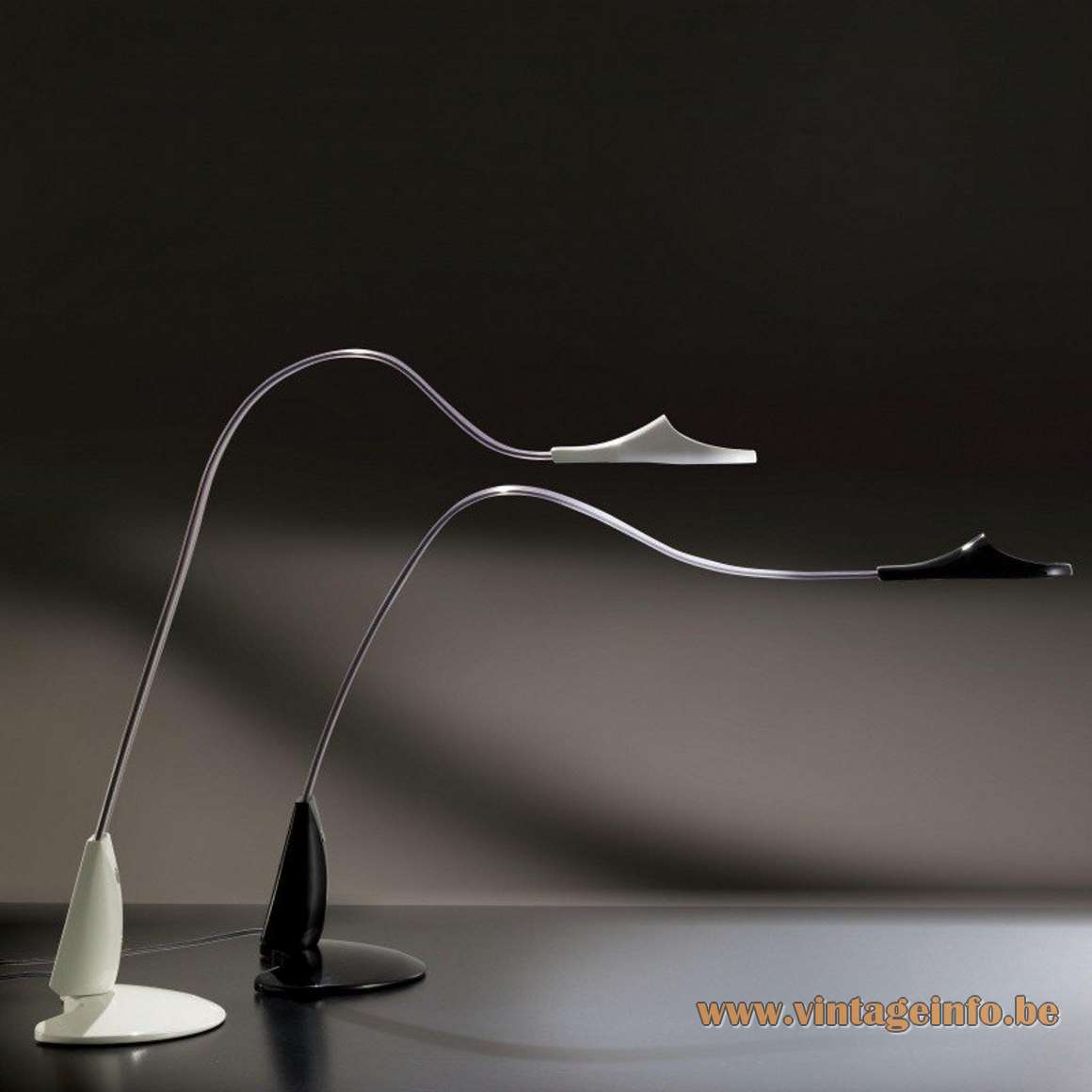 Electricity: 1 bulb G5 halogen, 1 x 50 watt maximum, 12 volt.
Any type of G5 lamp can be used. Not a specific one preferred.
The transformer has two circuits: 12 and 6 volt. The button can switch between both voltages: the bulb can burn at half force. When used at 110 volts, it is recommended to buy a 6 volt halogen lamp.

Other versions: The Stilnovo Nastro desk lamp exists also in blue. Since 1985 a clamp desk lamp was also in production.

Nastro is the Italian word for ribbon. It refers to the flexible pliable arm that looks like a fly curtain. Some sources say that this lamp was designed in 1982.

Alberto Fraser was born and raised in Glasgow, Scotland. Glasgow is a port city on the River Clyde in Scotland’s western Lowlands. Fraser is the son of an Italian mother and a Scottish father. He studied both Architecture and Industrial Design in the Rhode Island School of Design (1977-1984). The subject of lighting has always been a feature in his professional career. For over twenty years he has lived in Milan where he works for companies in different sectors with a strong propensity for technological innovation.

His company was named “Design Works“, today (2018) named FraserDesign. He runs it together with his daughter Patricia. Alberto Fraser is the author of the project Ribbon for Lumen Center Italia. The Ribbon LED lamps are made in the same way as the Nastro; with a ribbon. They were in production since 2007 for several years.