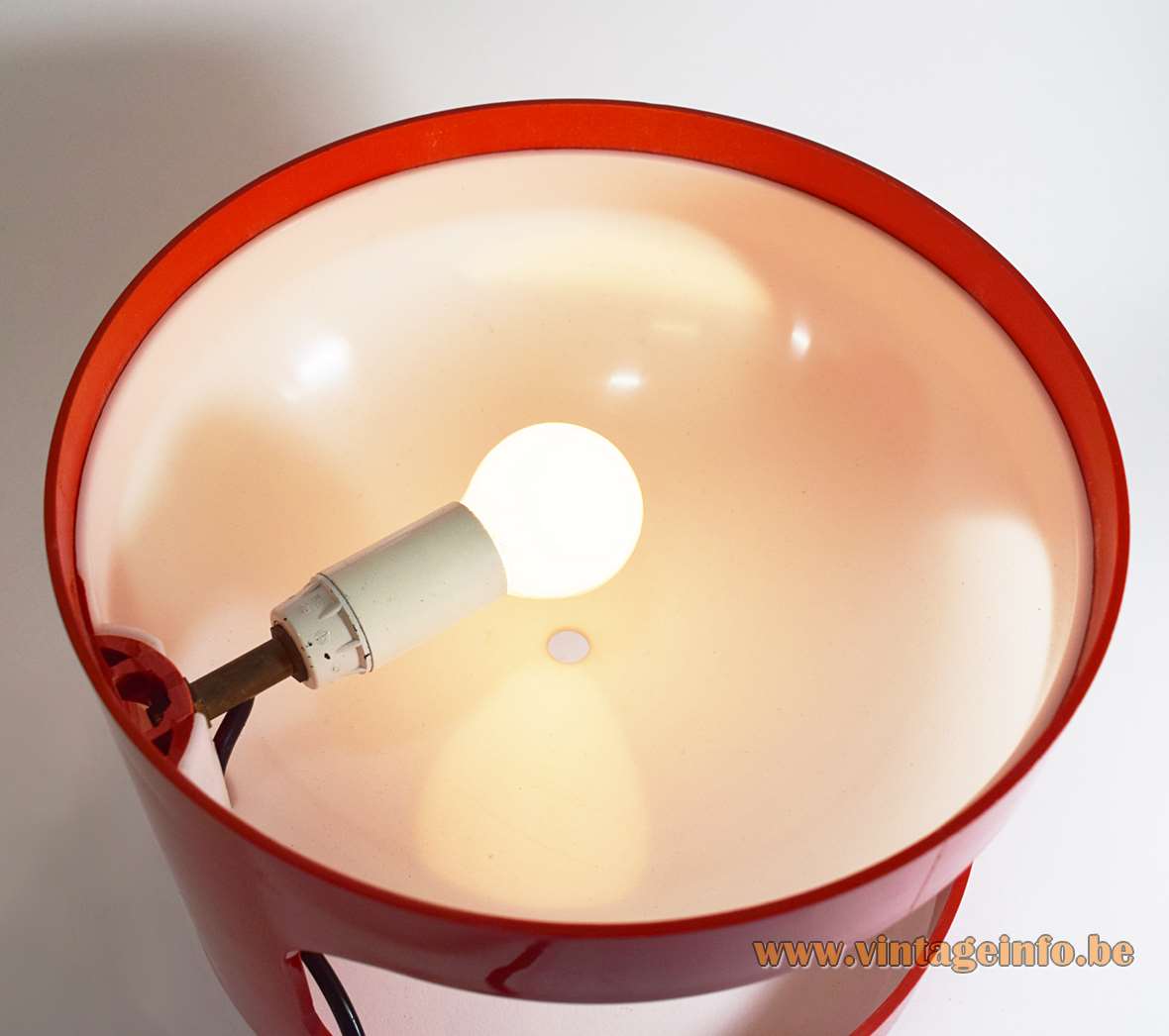 A white version of the Joe Colombo KD 28 Kartell table lamp was used as a prop in the 2009 film Mr. Nobody. A science fiction drama film written and directed by Jaco Van Dormael. Starring Jared Leto, Sarah Polley and Diane Kruger. Many other lamps appear in this film. The lamp on the table is in all probability a Majestic Lamp Company table lamp (USA) from the 1950s. 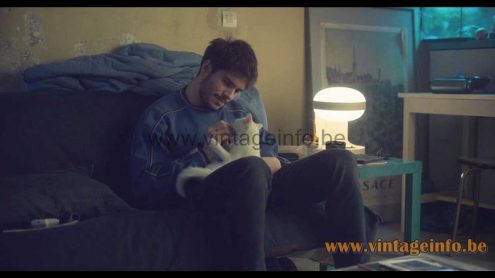 A white version of the Joe Colombo KD 28 Kartell table lamp was used as a prop in the 1969 film Paris N’existe Pas. The story of an artist who develops the ability to see into the future and the past. His hallucinations increase with time. Featuring French singer Serge Gainsbourg and Richard Leduc as the artist. In this scene together with the Ingo Maurer ML 32 table lamp. You can find it over here. 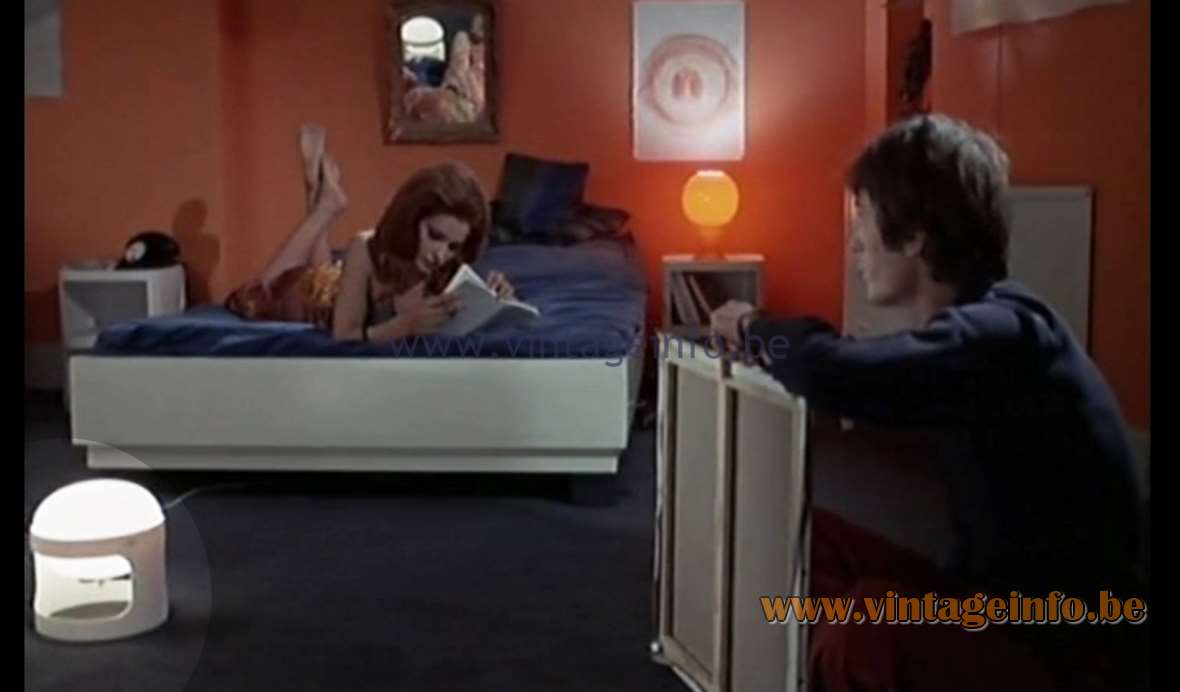 A black version of the Joe Colombo KD 28 table lamp was used a s a prop in the 2016 French comedy film Un Homme À La Hauteur (Up for Love). The film is a remake of the 2013 Argentine film Corazón de León. Also in the room an AJ floor lamp designed by Arne Jacobsen in 1960 and produced by Louis Poulsen. A Serge Mouille wall lamp is also present. 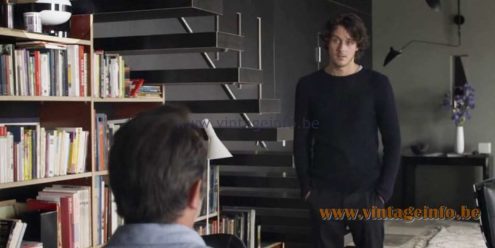 A red Kartell KD 29 Kartell table lamp appears in the Belgian TV-series “Huizenjagers” (House hunters). This series is broadcast on Vier (4) since 2017.  Other lamps in this picture: the Panthella floor lamp of Verner Panton and the Harvey Guzzini Clan designed by Studio 6G. Every season several lamps appear in this series. You can find them here.

Other versions: This Joe Colombo KD 28 Kartell table lamp exists in many colours. The bigger version KD 29 is a desk lamp with a tray, as you can see below. The KD 27 is the same lamps as the KD 28. The KD 27 is chrome or brass coloured, the KD 28 all the others. Apparently, yellow, lime green and purple were only sold in Australia.

The table lamp KD 27 (and the KD 29, a larger model) is designed by Joe Colombo for Kartell in 1967. This light is stackable and sold as table or floor lamp. Made from 1967 until 1981. Early versions are made from a different kind of plastic and have the bulb and socket in the middle.

Also AB Husqvarna Borstfabrik sold these lamps in Sweden. And probably also some other companies around the globe.

One of his most famous lamps is the Topo. Made as a floor lamp, clamp lamp, desk lamp and table lamp and produced by Stilnovo in the 1970s.

Kartell is an Italian company that produces plastic contemporary furniture.  The company, head-quartered in Milan, began manufacturing auto-mobile accessories in 1949. It expanded into home furnishings in 1963. It was founded by Italian chemical engineer Giulio Castelli (1920 – 2006) and his wife and architect Anna Castelli Ferrieri (1918 – 2006). Kartell became well-known due to the work of design’s by her hand.

Episode with a Kartell 29 table lamp in Huizenjagers 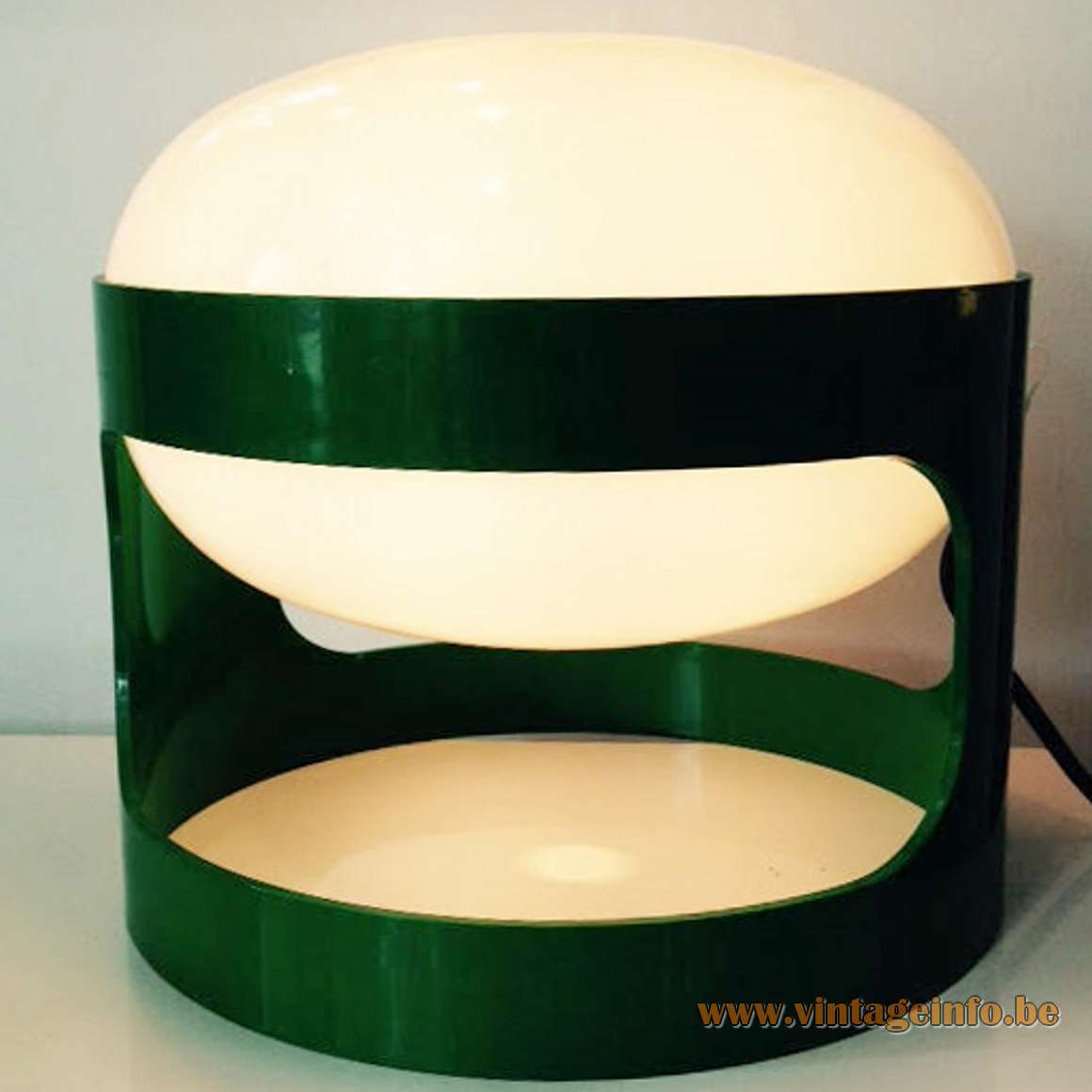 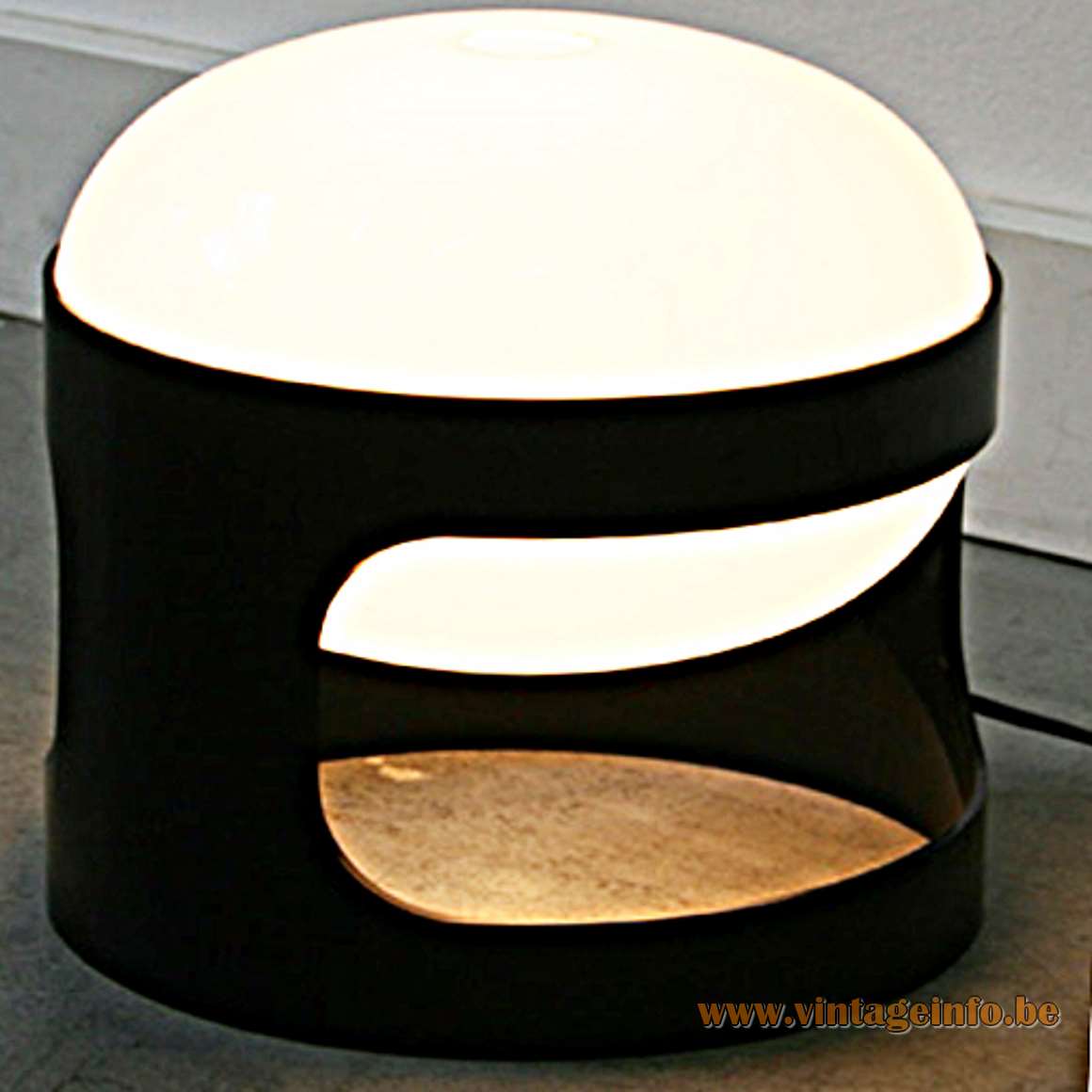 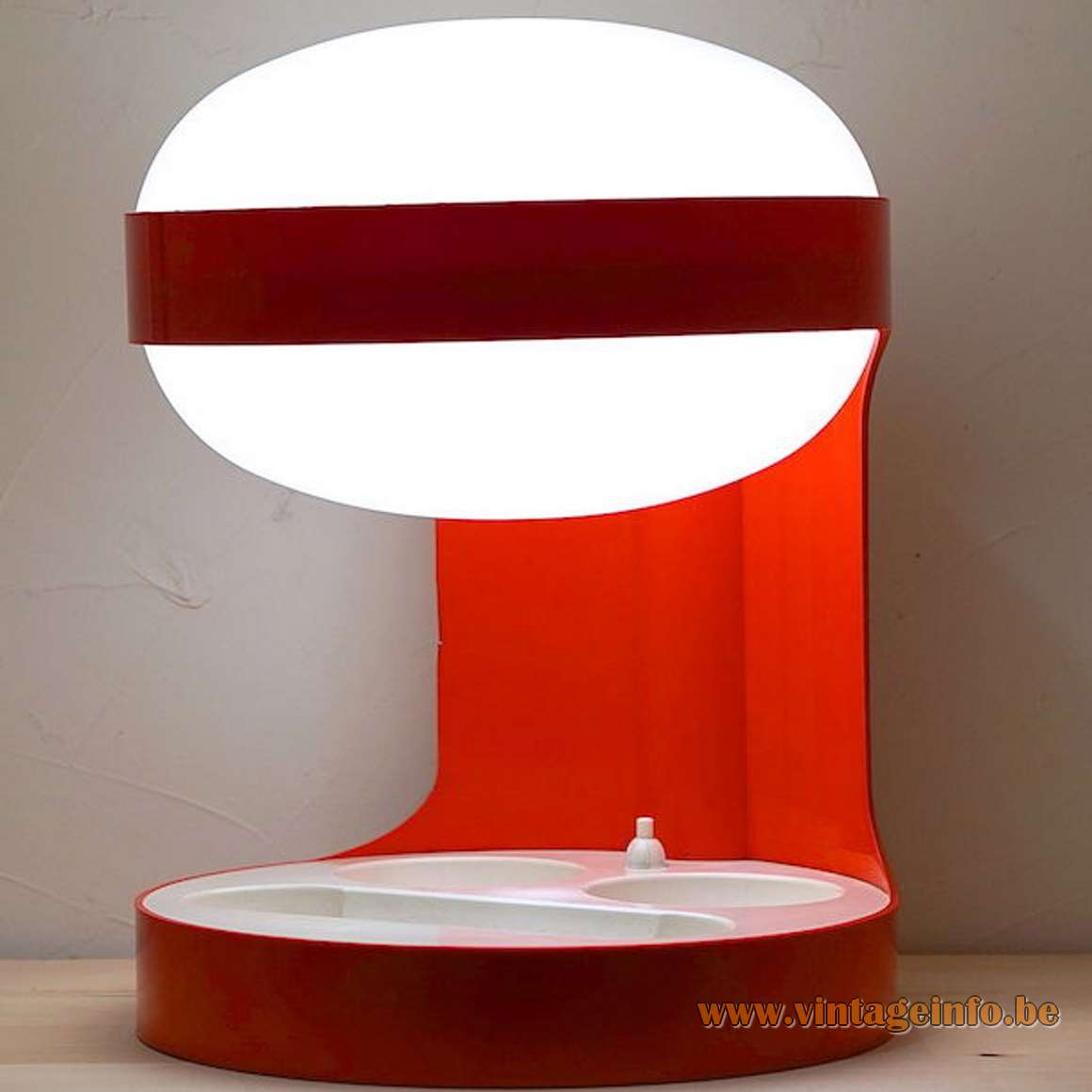 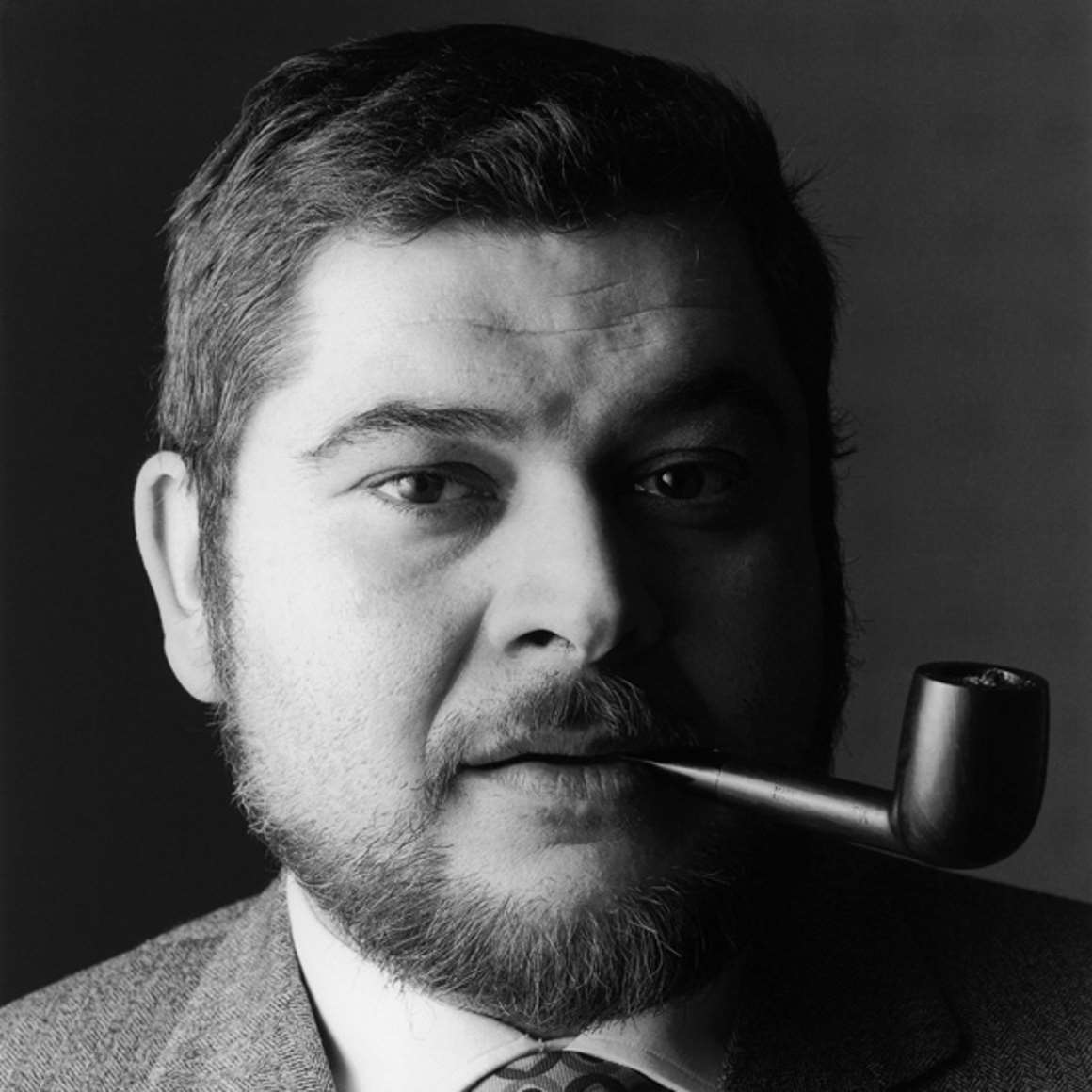 The museum collection consist of more than 8,000 objects, 5,000 designs and 15,000 photographs. Kartell Museo is housed in the Kartell factory in Noviglio, near Milan, the company’s general headquarters since 1967. 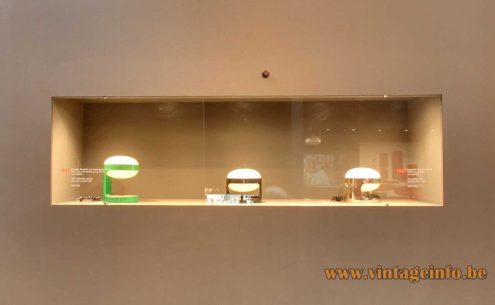 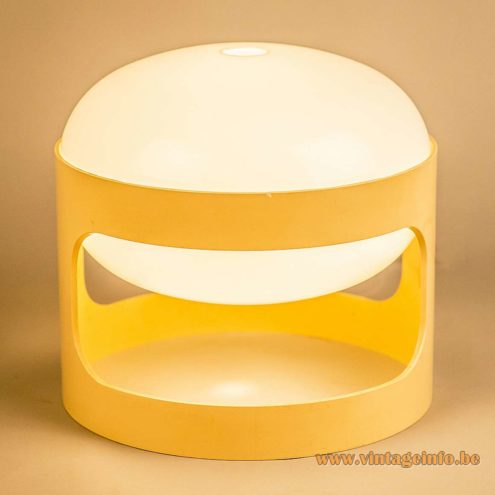 Many thanks to Tinneke for the photo of the yellow lamp.