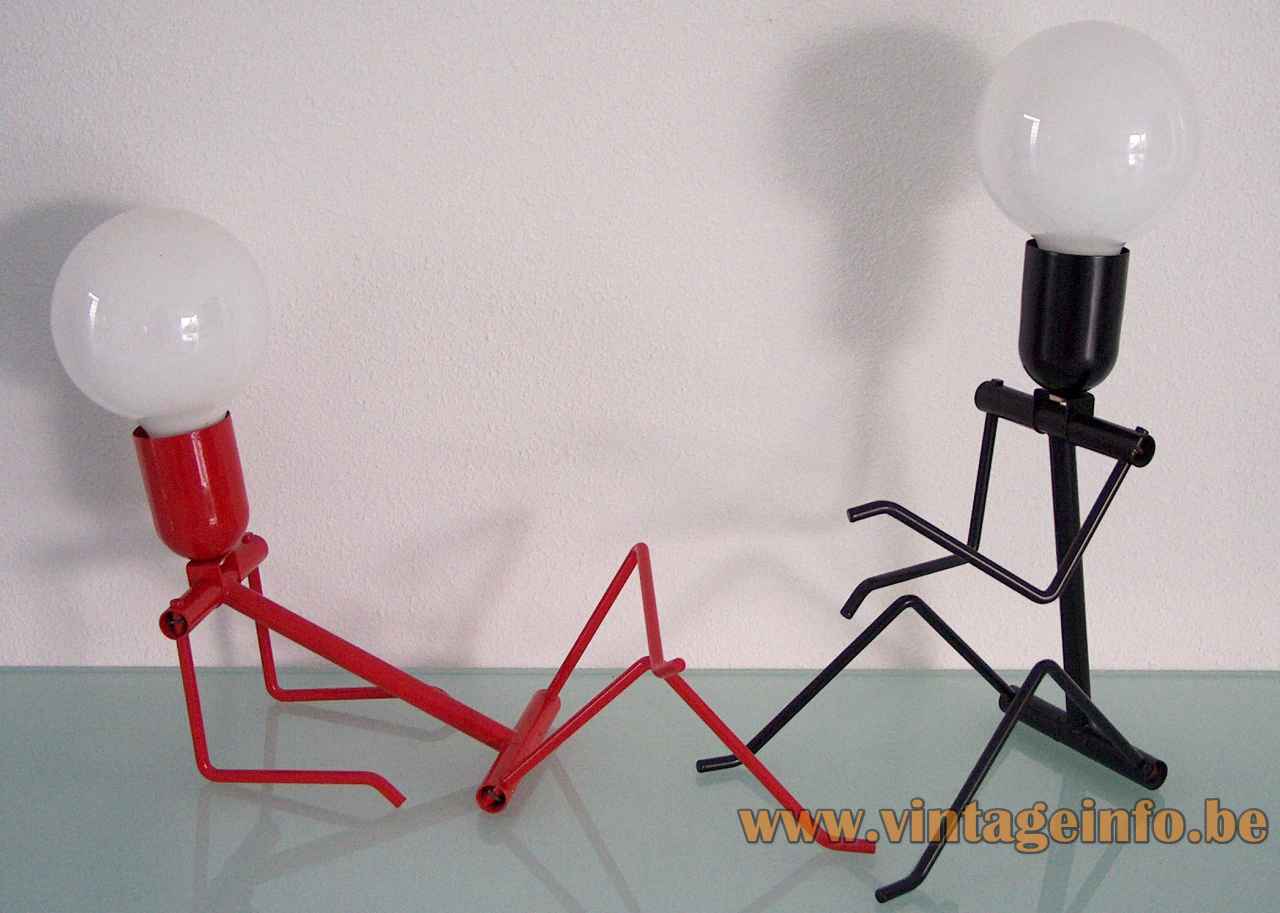 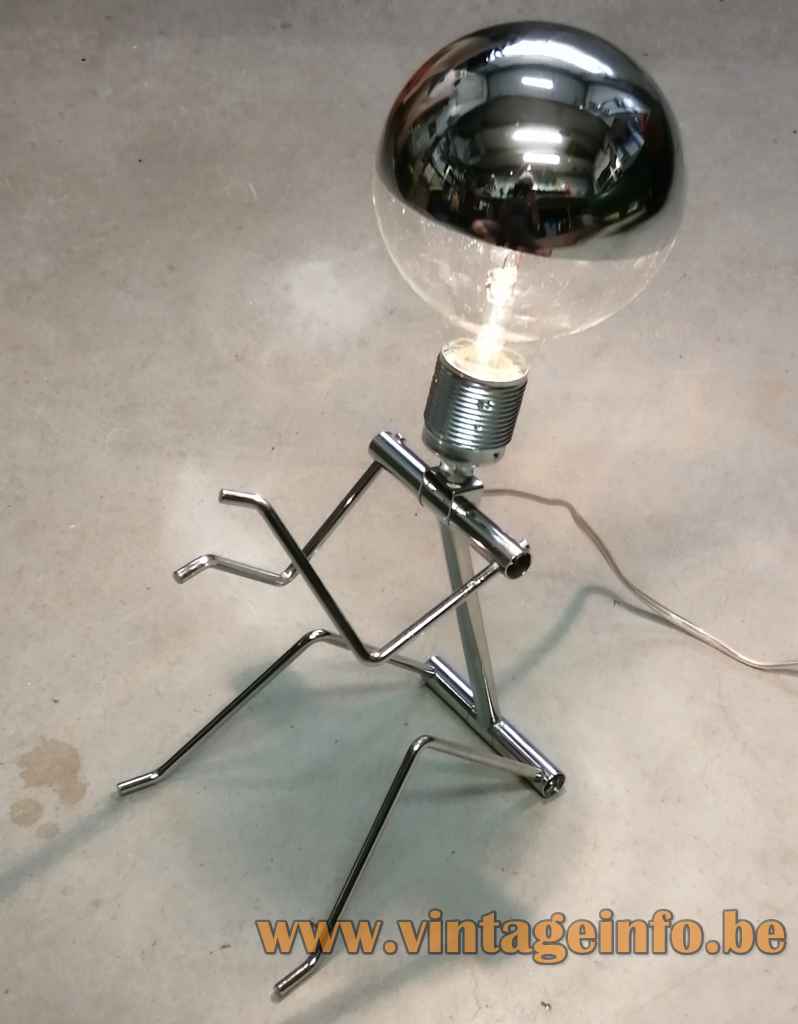 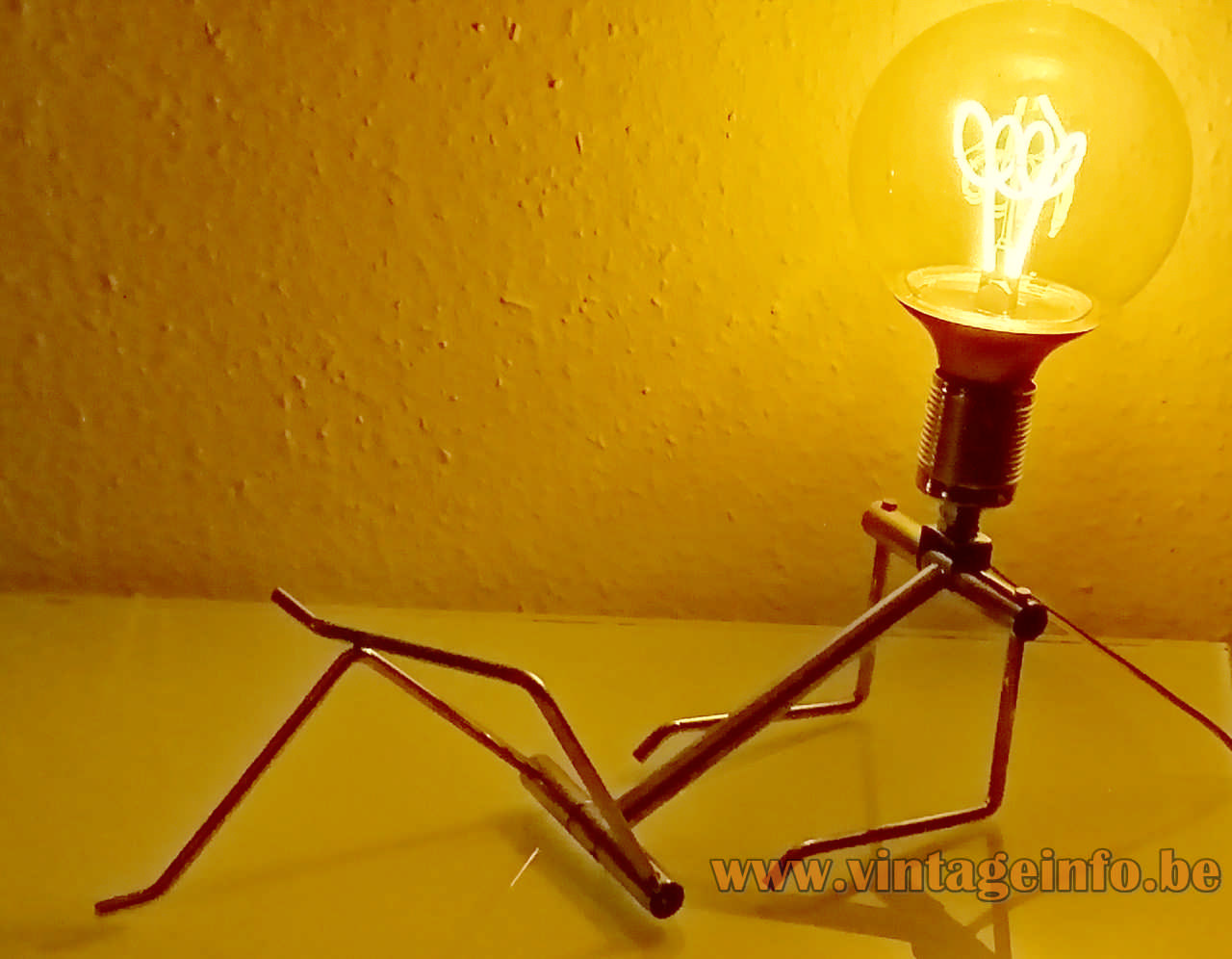 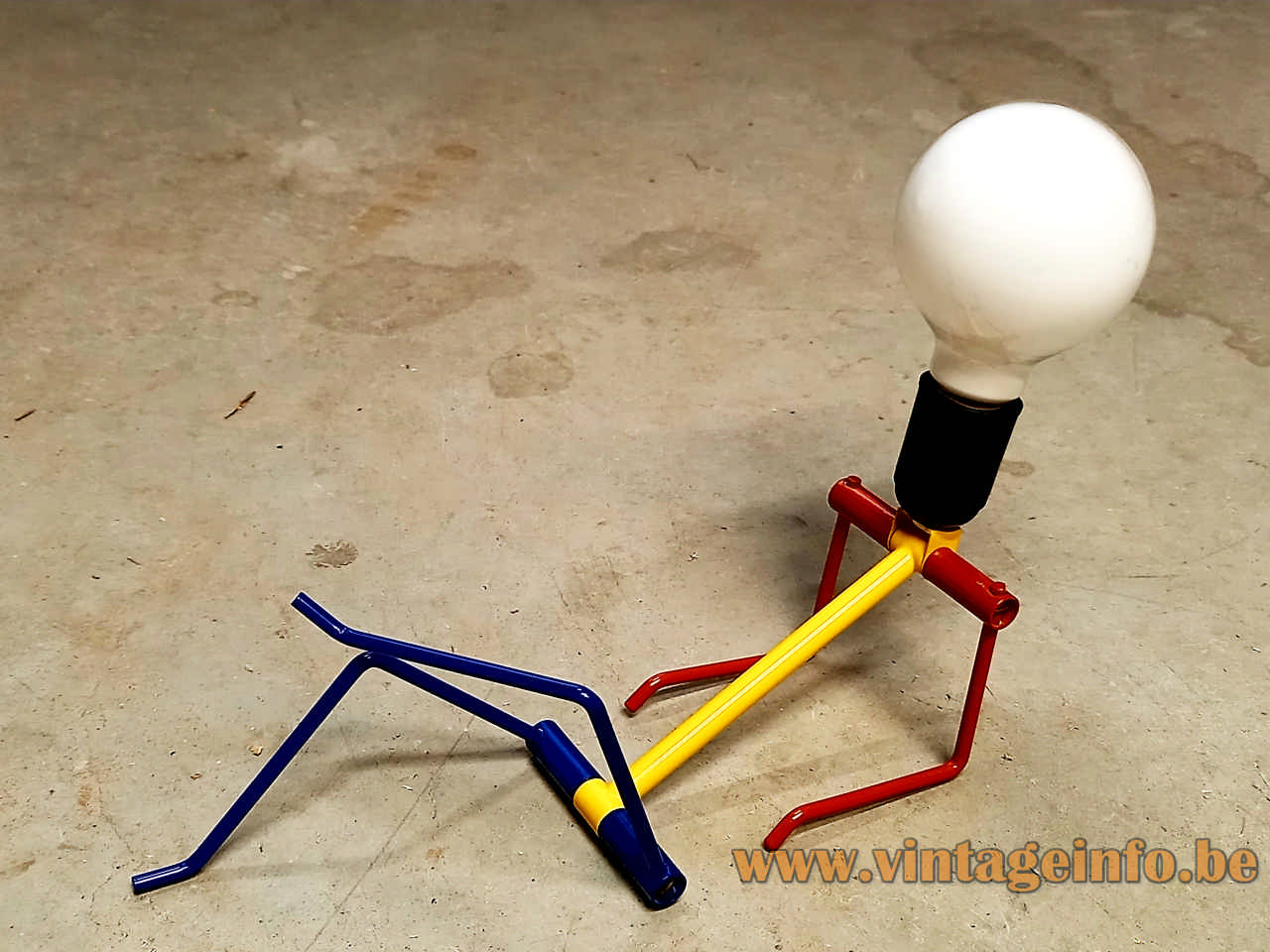 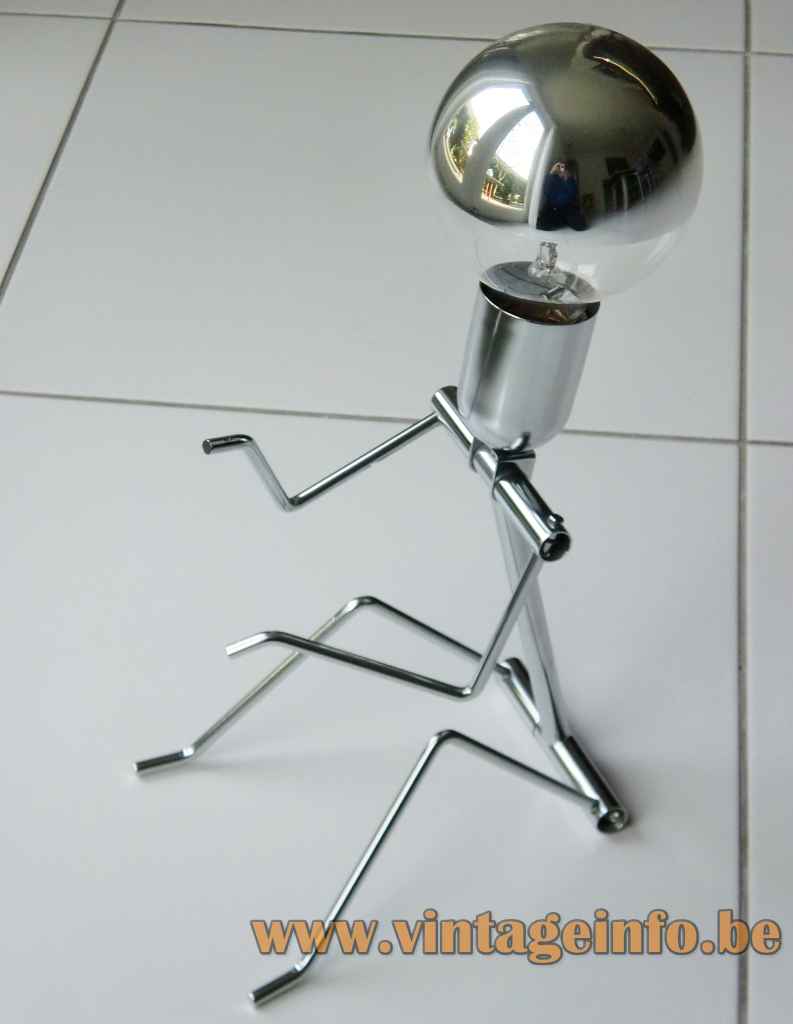 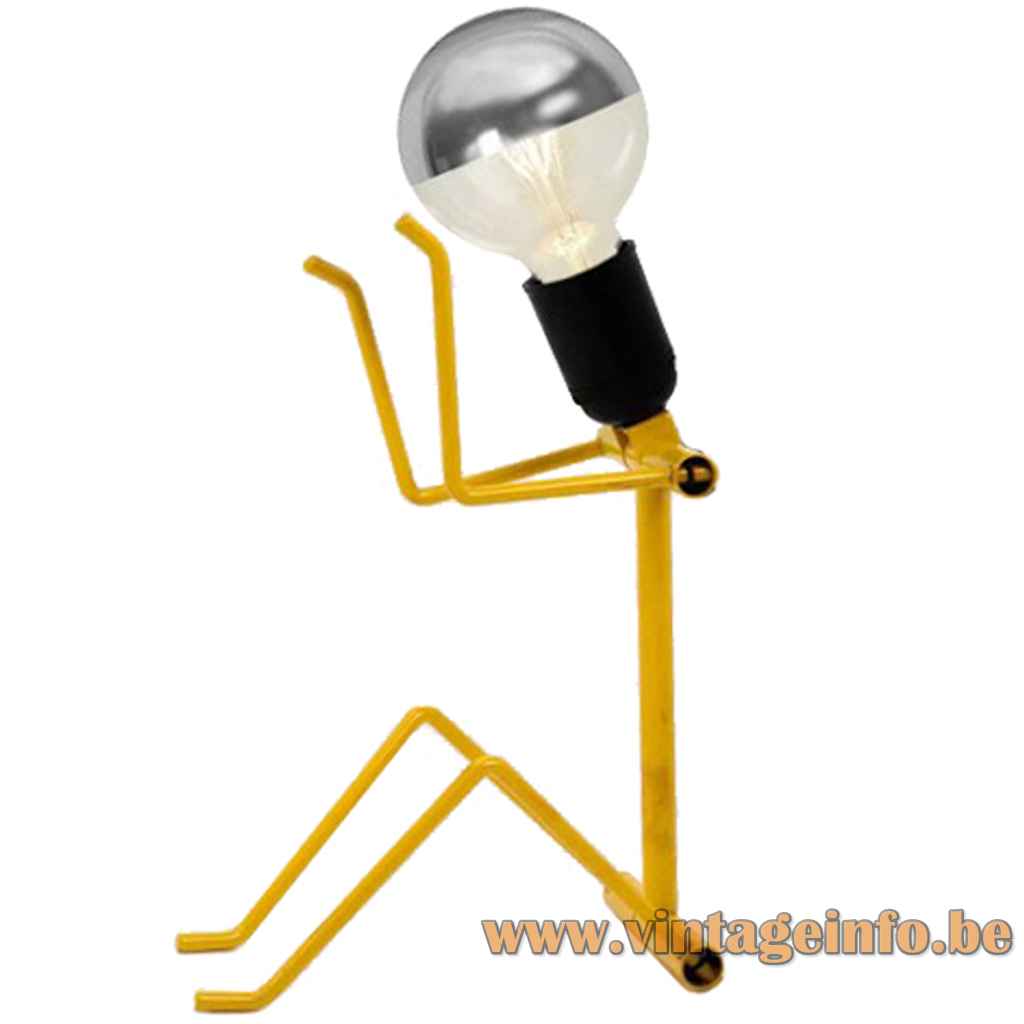 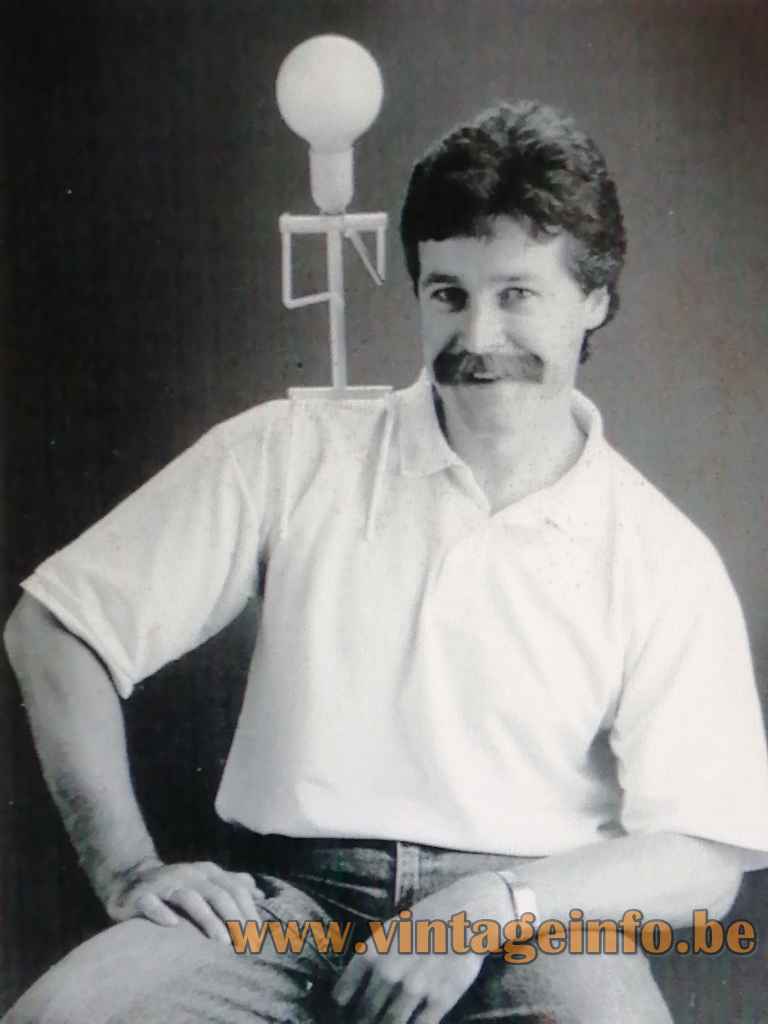 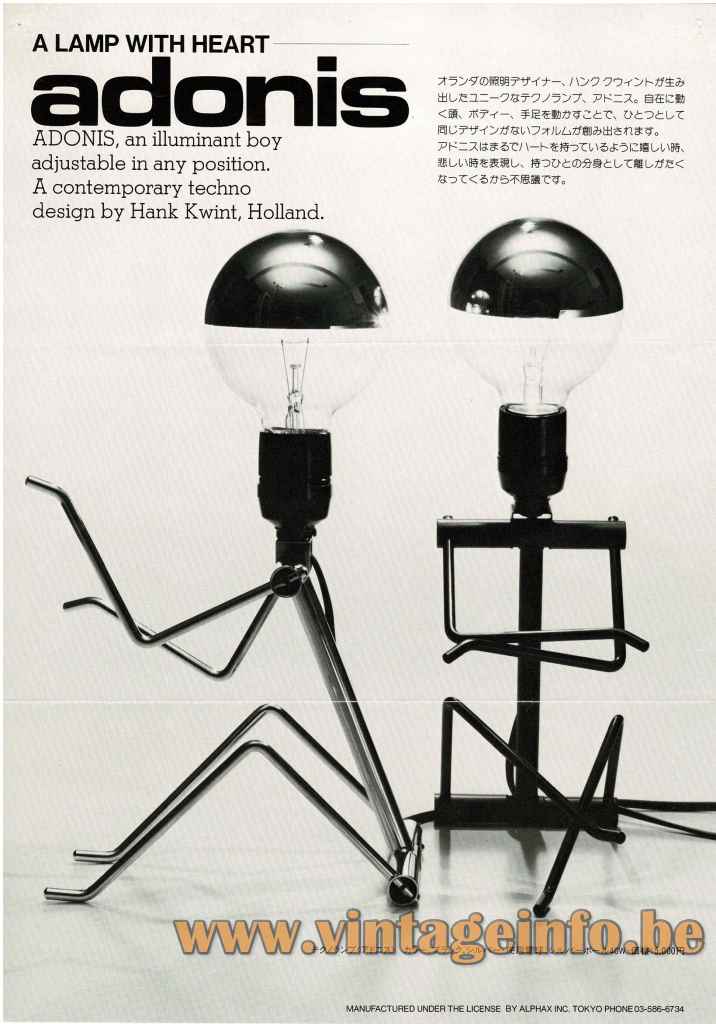 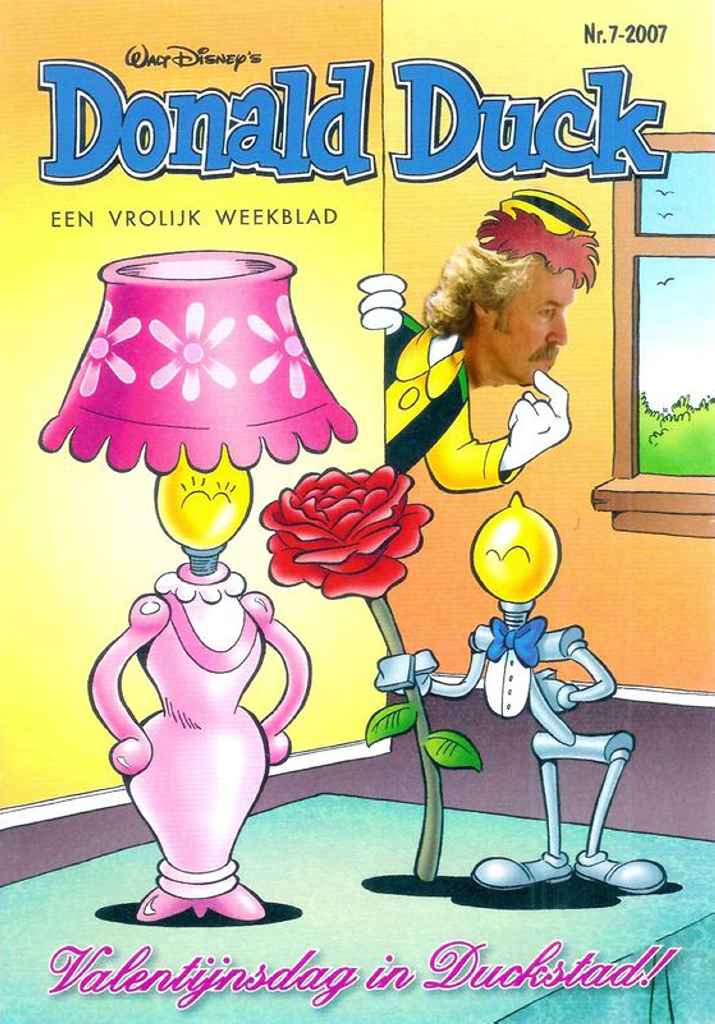 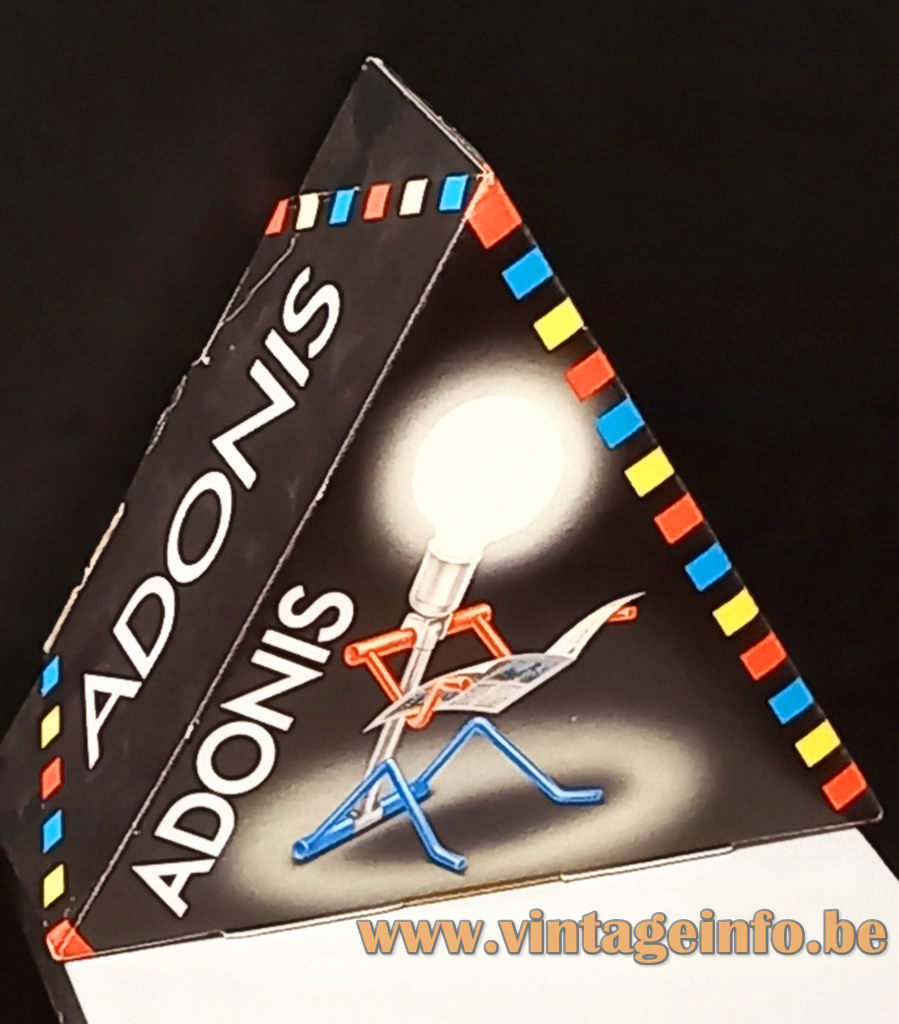 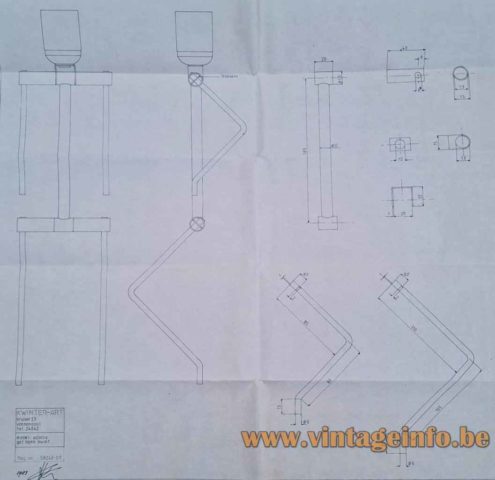 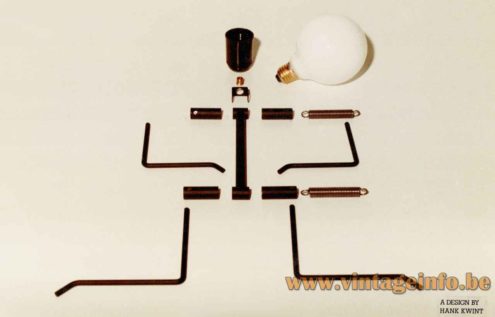 Other version: This Hank Kwint Adonis table lamp exists in several colours. The first Adonis lamps (from Hooge products) only came in white or black and had an white 10 cm globe light bulb. Initially 25W and later 40W. The yellow, red and blue ones are from Mad Design and are from the 90s. The chromes are made very limited by Hank. About a dozen have been made.

Hank Kwint was born in Kesteren, The Netherlands in 1951. Growing up in a house on the site of a brick factory along the Rhine in Gelderland, Kwint was always involved with technology and design as a child. It was therefore clear to him that he would make this his profession.

Kwint studied mechanical engineering in secondary technical school from 1969 to 1974, but because he preferred to focus on design, he decided to take an evening course in interior design in 1978.

His first job in the design industry was at Leolux Zitmeubelen (seating furniture) in 1978. Kwint was always busy developing new ideas and designs. His designs are mainly characterised by his minimalist style, which stems from his preference for the movement ‘De Stijl‘ that arose in 1917.

The Adonis table lamp is made of only a few metal tubes with a spring system as joints for arms and legs. On top of this is a lamp socket with a head of a 25 watt white globe (10cm / 3.93”) light bulb. Despite the simplicity of the design, Kwint managed to make the lamp really come to life. The slogan that was used in Japan was therefore: “Adonis, a lamp with heart”

When Kwint was asked: why Adonis? He said, pointing to an Adonis in the room: Look, this is a real young god after all.

The Adonis table lamp was manufactured manually in 1983 by Kwint himself. The lamps were published under their own label KwinterArt, later it became Kwint Design. The production of 1 copy cost Kwint 34 guilders (16 euros). He himself went to gift shops and department stores with these lamps and sold them for 75 guilders each (37,5 euro).

Demand was so high that production was outsourced to a sheltered workshop in his hometown of Veenendaal. When they could no longer keep up with demand, the production of parts was carried out by the Hala Zeist factory for a short period.

The producer Hooge Products (1983 – late 1990s) from ‘s-Hertogenbosch, The Netherlands (known for the word clocks by Hans Muller & Hans van Dongen) subsequently included the Adonis lamps in their range until about 1990.

Exact production figures are not known, but an estimate is 8 to 10,000 copies sold worldwide. Adonis was then released by “Mad Lighting” for a while in the triangular box and in different colours, but this did not turn out to be a success.

The Surf lamp was released the same year (1983). Also some clean lines, this time combined with a large triangular acrylic sail. The Surf lamp was also released in perforated metal and as a duo and wall surfer. Other lamps he designed are the Multa Triangula, Manhattan, Not Afraid Of Red, Yellow And Blue, Foam Lamp, Brilliant, Avatar, Flower Power and Shadow Flower. 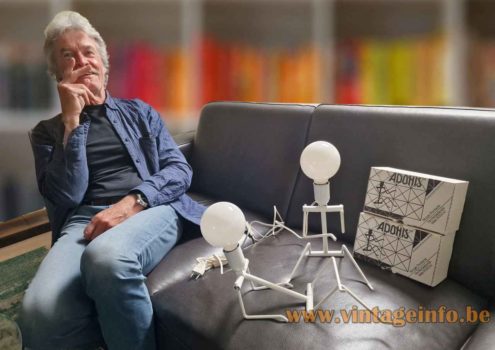 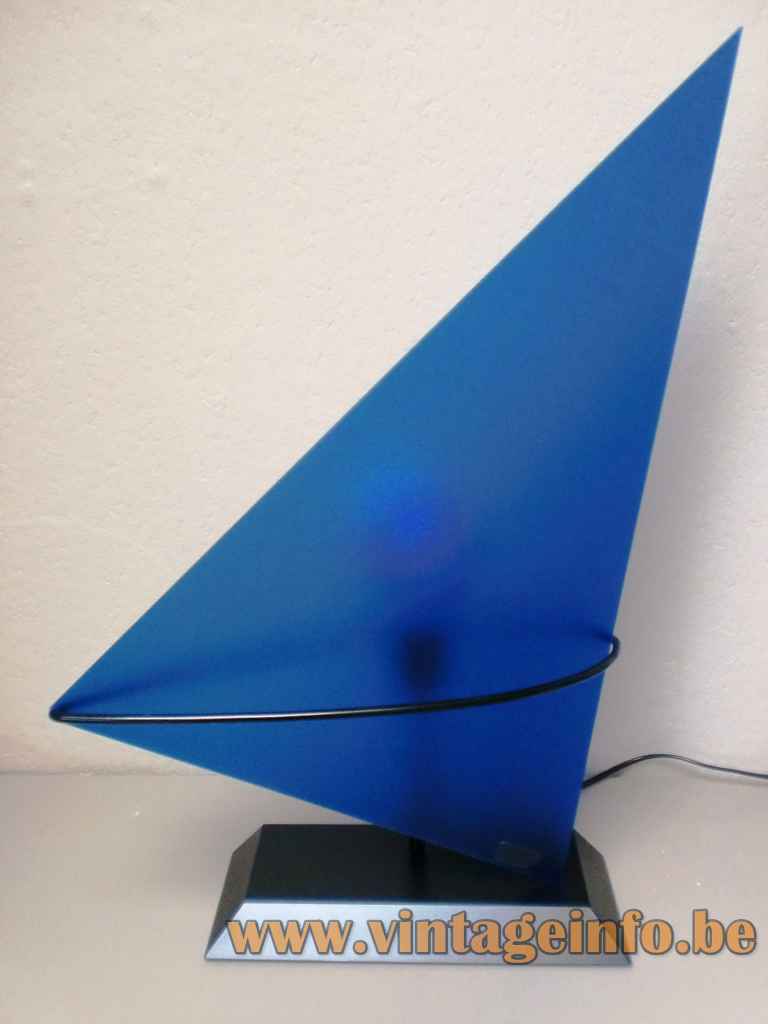 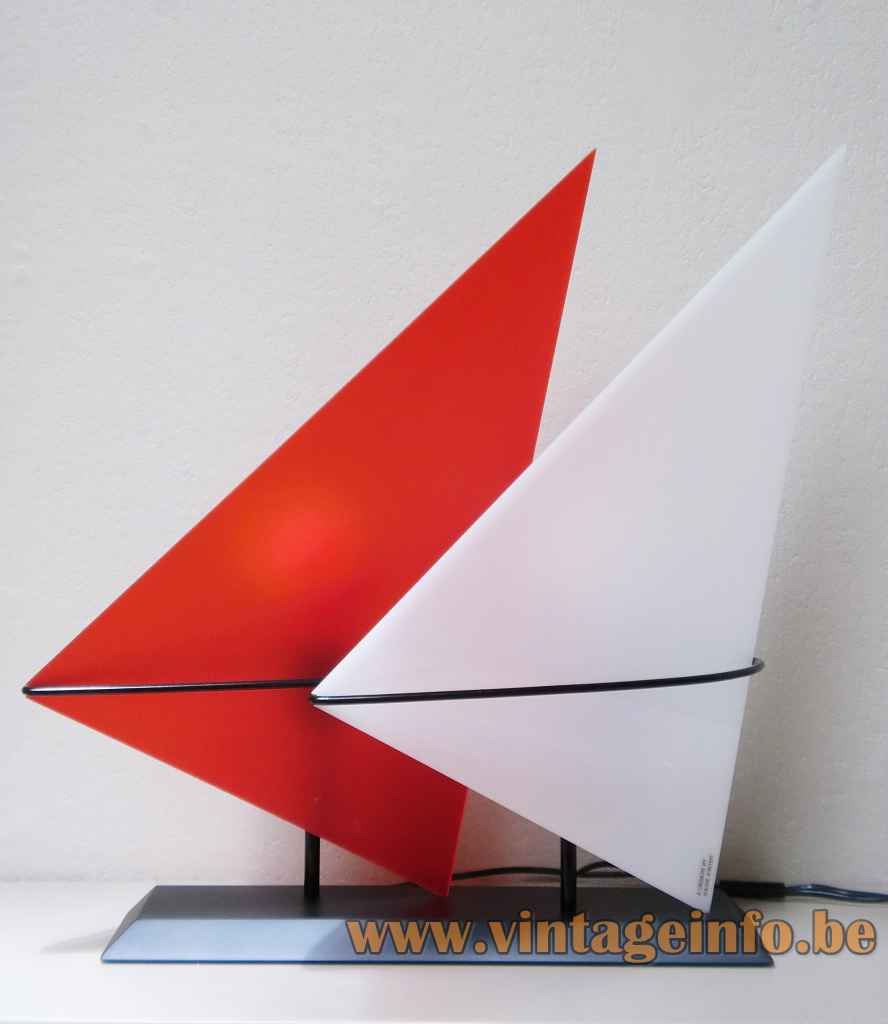 Many thanks to Hank and Erik from Loads Of Lights for all the text, images and help!