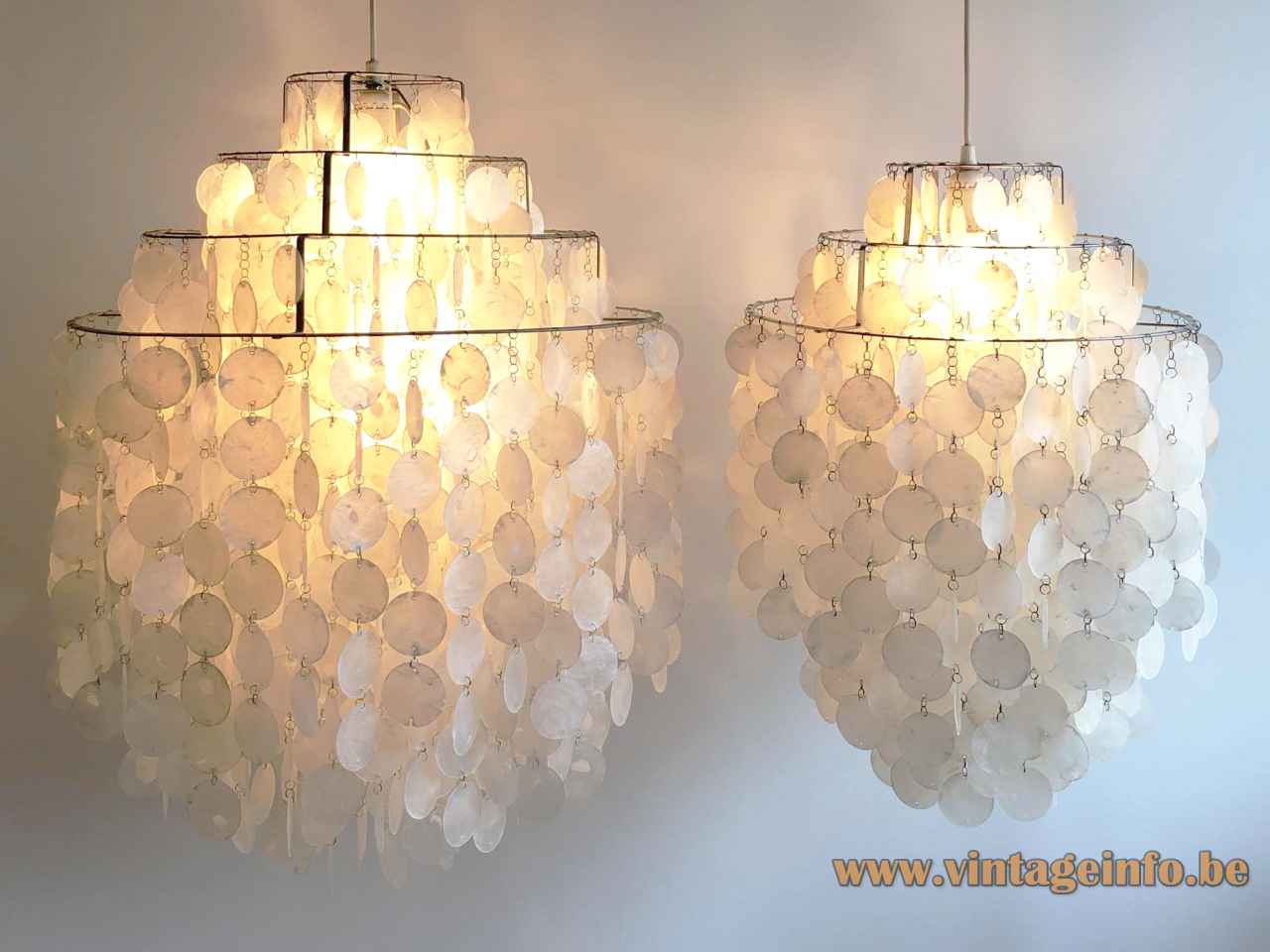 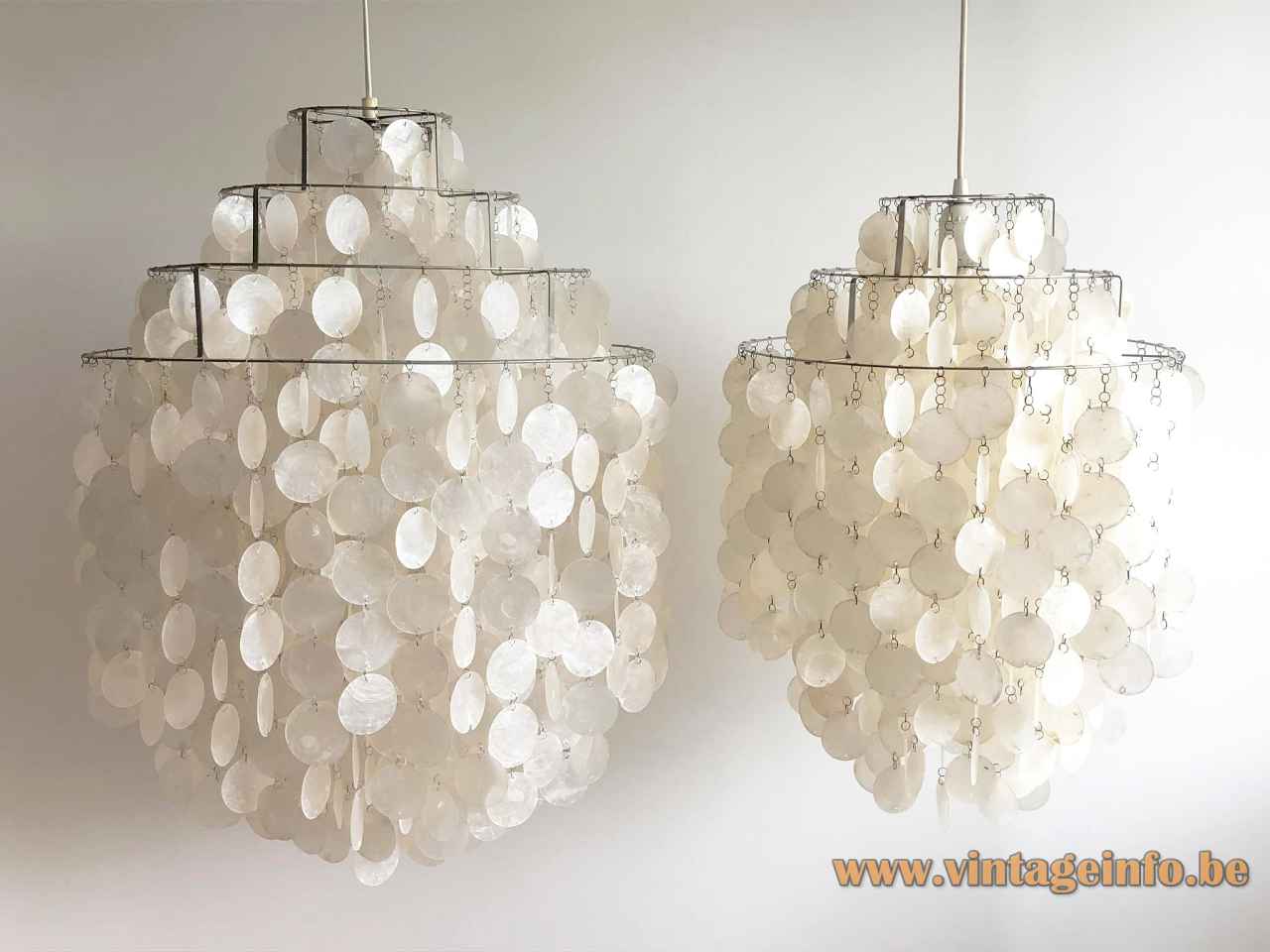 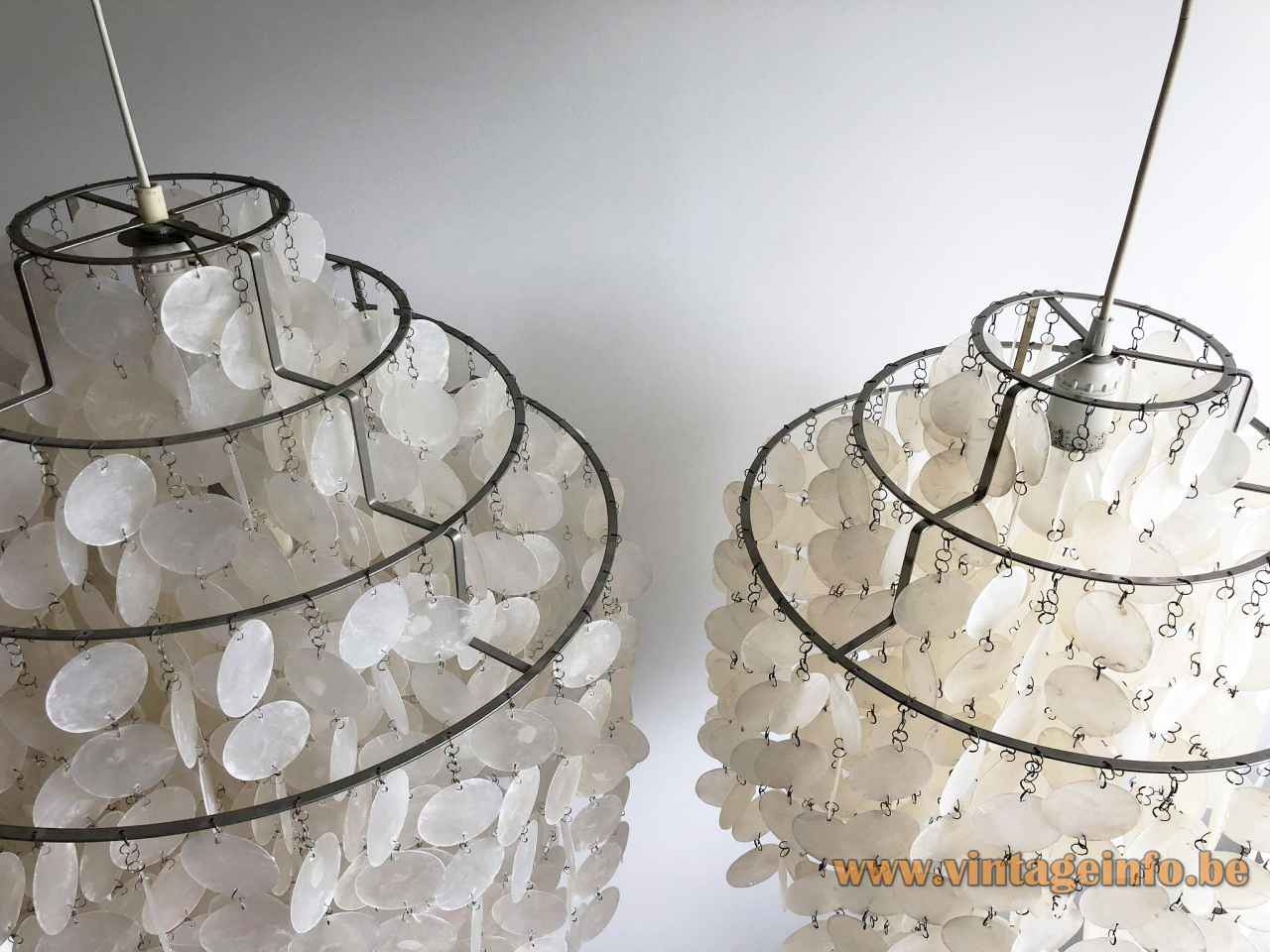 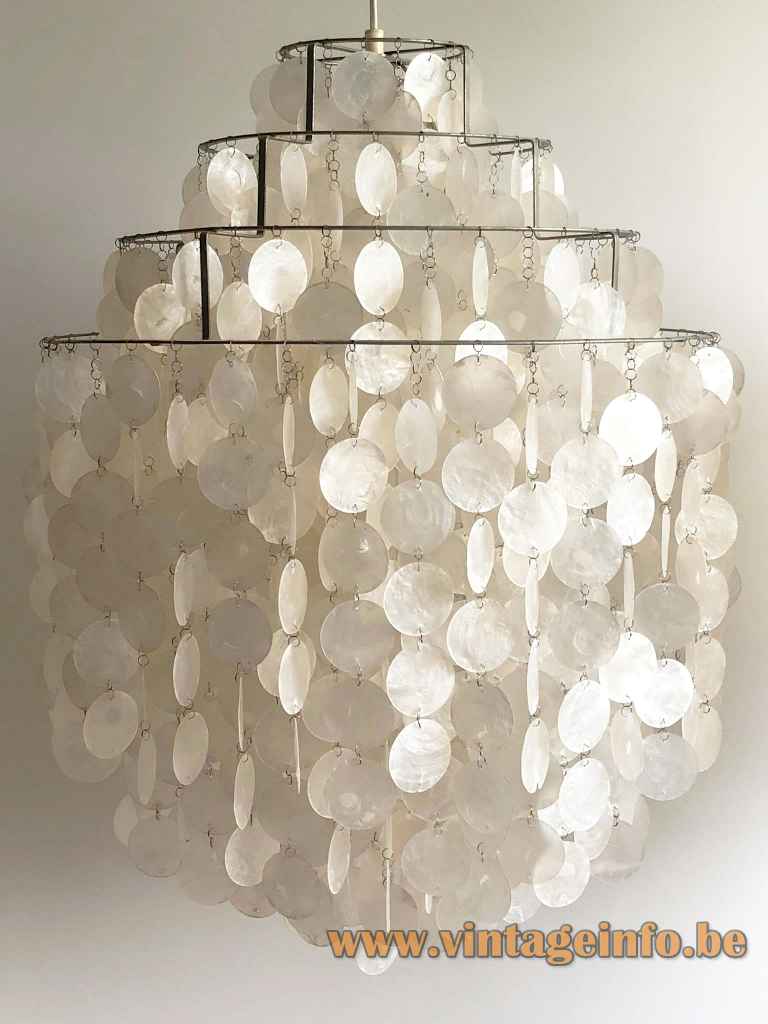 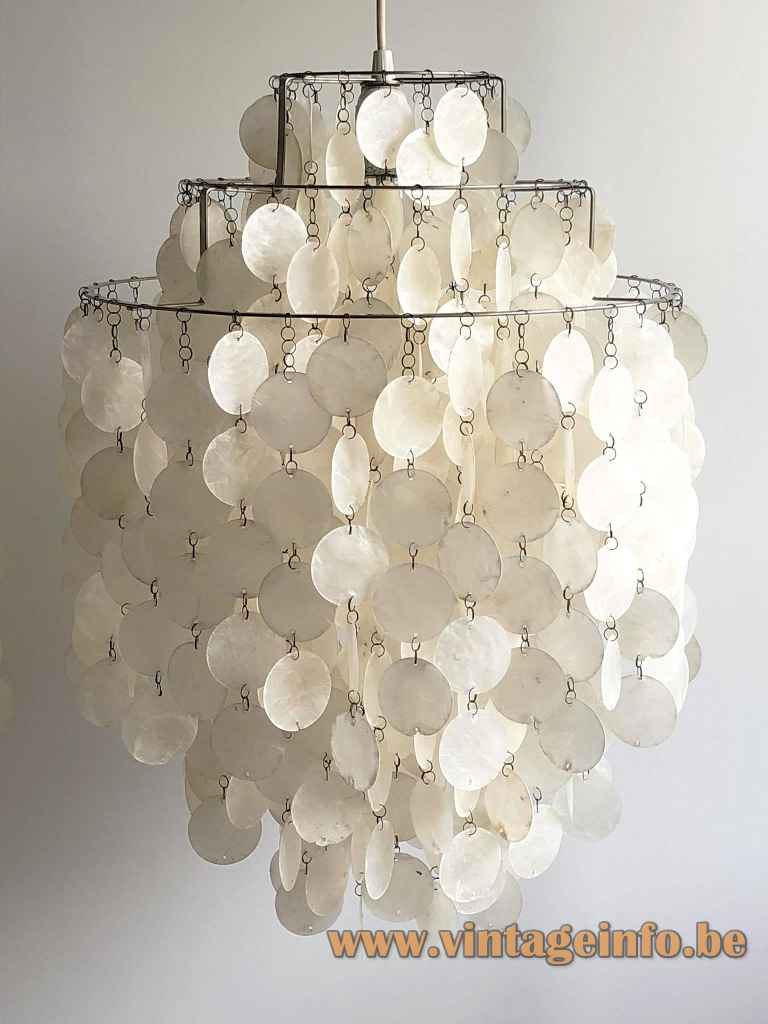 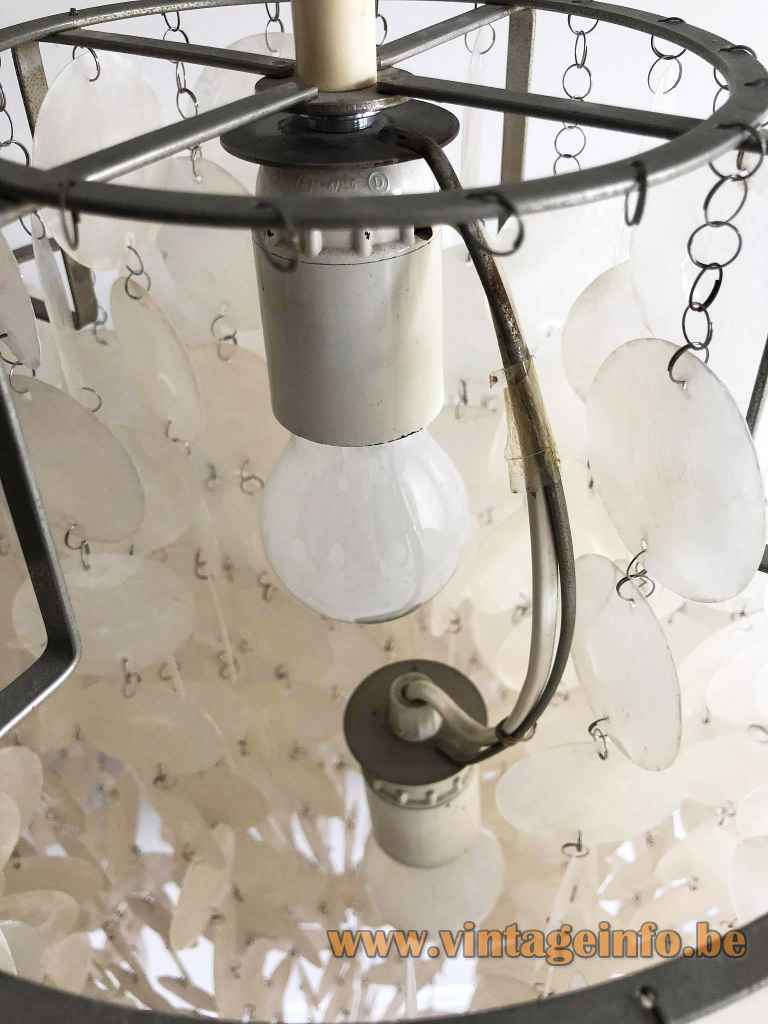 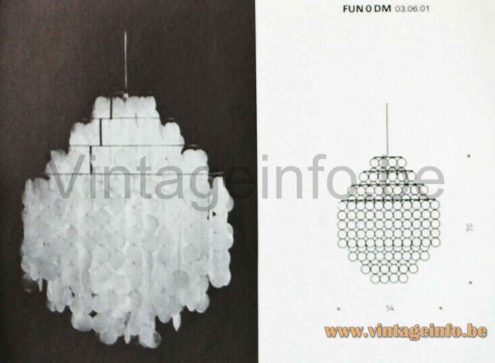 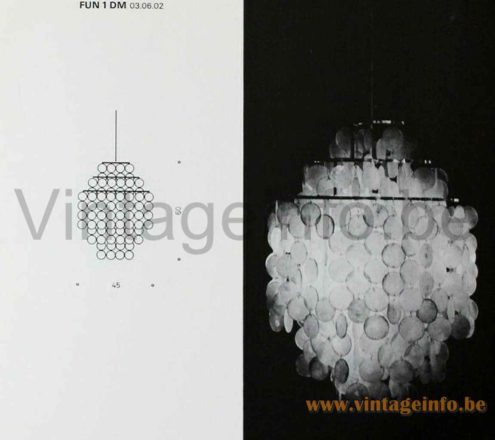 A Verner Panton Fun 5DM chandelier was used as a prop in the 1969 James Bond film On Her Majesty’s Secret Service. Starring George Lazenby, Diana Rigg and Telly Savalas. 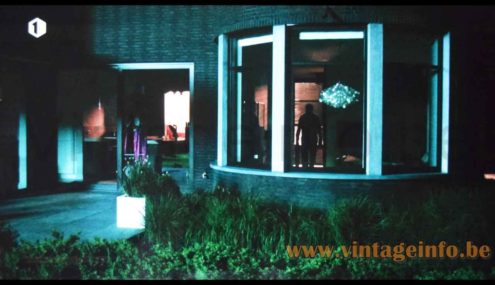 A fake Verner Panton Fun pendant lamp was used as a prop in Rocketman, the 2019 biographical musical film based on the life of musician Elton John. Starring Taron Egerton, Jamie Bell and Richard Madden.

Produced by several companies, many fake ones were made over the years. Today these lamps are exclusively made by Verpan. They produce the legal contemporary versions.

Verner Panton designed these lamps with silver paper, instead of shell discs. It was Lüber who wanted the shells.

The shells of these lamps come from the Philippines, to be exact from the eponymous province of Capiz. The shells (Placuna placenta) have been used for thousands of years as a glass substitute because of their durability and translucence.

The windowpane oyster used for these lamps are often named “mother of pearl”, but that’s another shell. Mother of pearl is “nacre” and it’s the inside of a different shell and is not translucent. The outside of a pearl is from the same organic material. Also on the Verpan website these lamps with capiz shells were incorrectly described. Today, 2022, they say seashell discs, without saying what it really is.

From 1953 until 1955 he studied in various European countries and in 1955 he started his own business. Verner Panton received numerous awards for his designs. He passed away in Copenhagen on 5 September 1998.

The J. Lüber A.G. company still exists, but they do not produce lighting anymore. Today they are specialised in gifts and home accessories.

The Danish Verpan company is a furniture and lighting manufacturer dedicated to the works of Verner Panton. Verpan has the exclusive rights to a significant part of Verner Panton’s iconic lighting, furniture and accessories. New Fun lamps can be bought via their website. You can find a dealer in your neighbourhood over there.

The Verner Panton Fun floor lamp was used as a prop in the 2019 Spanish drama film Dolor Y Gloria (Pain And Glory) directed by Pedro Almodóvar. Starring Antonio Banderas, Asier Etxeandia and Penélope Cruz. It was chosen by Time magazine as the best film of the year. Many beautiful lamps appear in this film. Not to mention the rest of the interior. 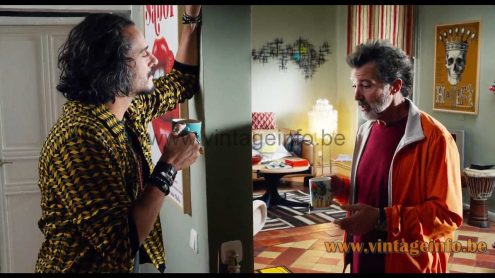 New lamps via the Verpan website – find a dealer