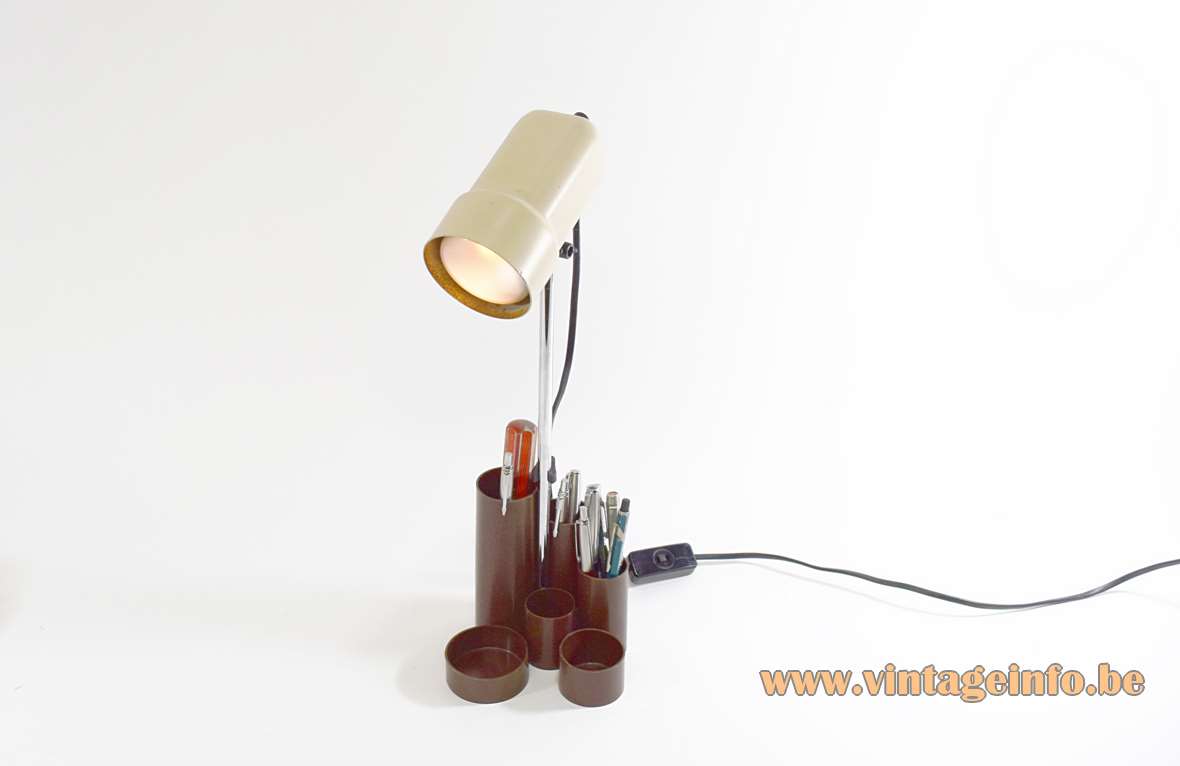 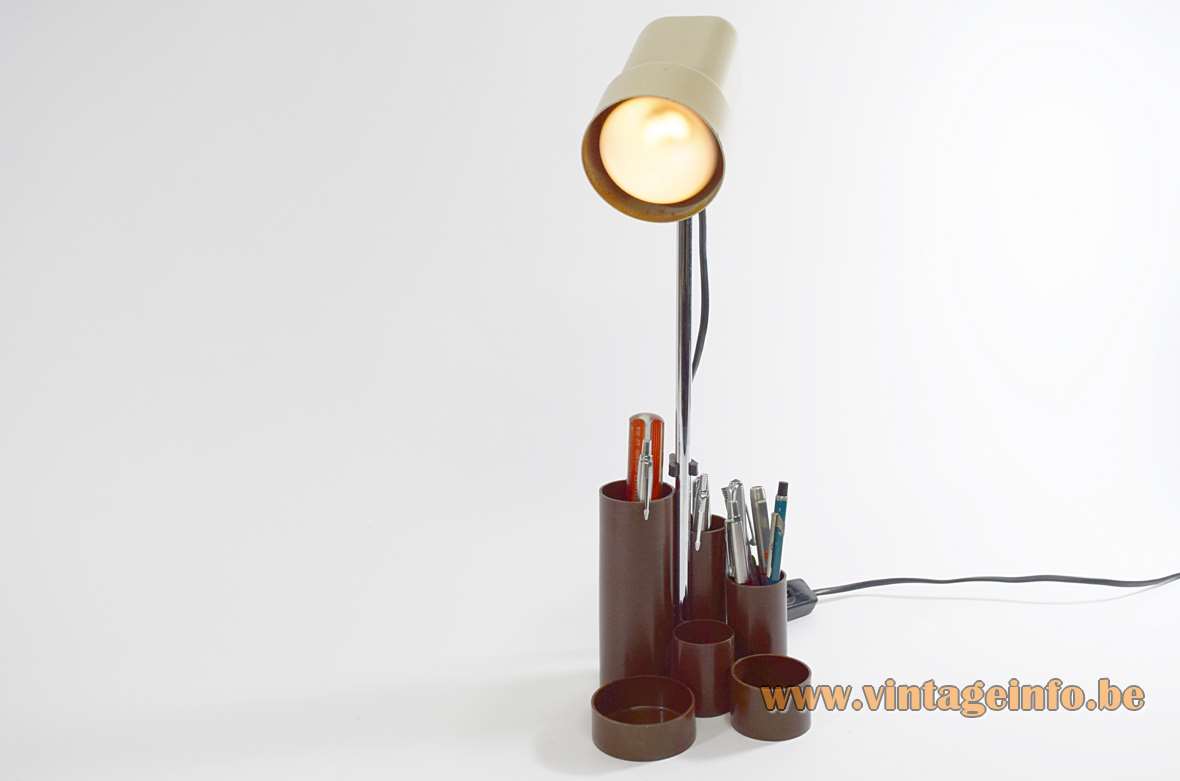 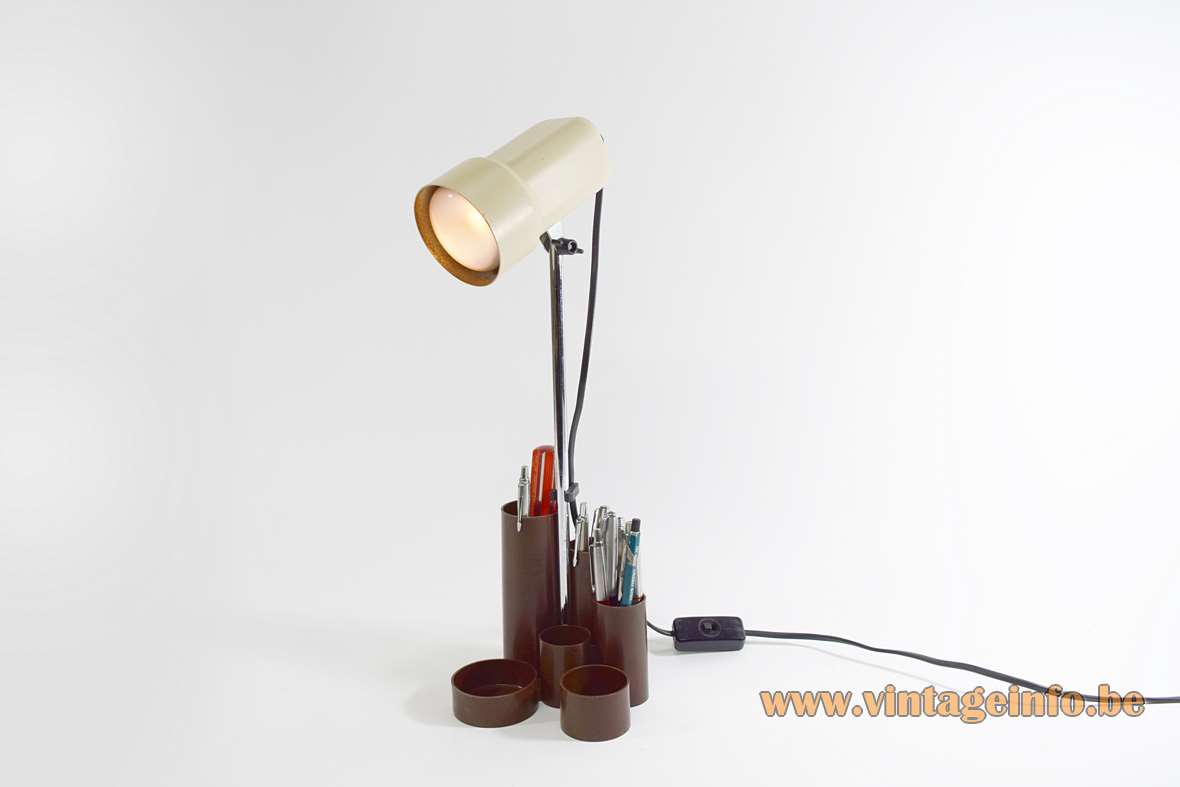 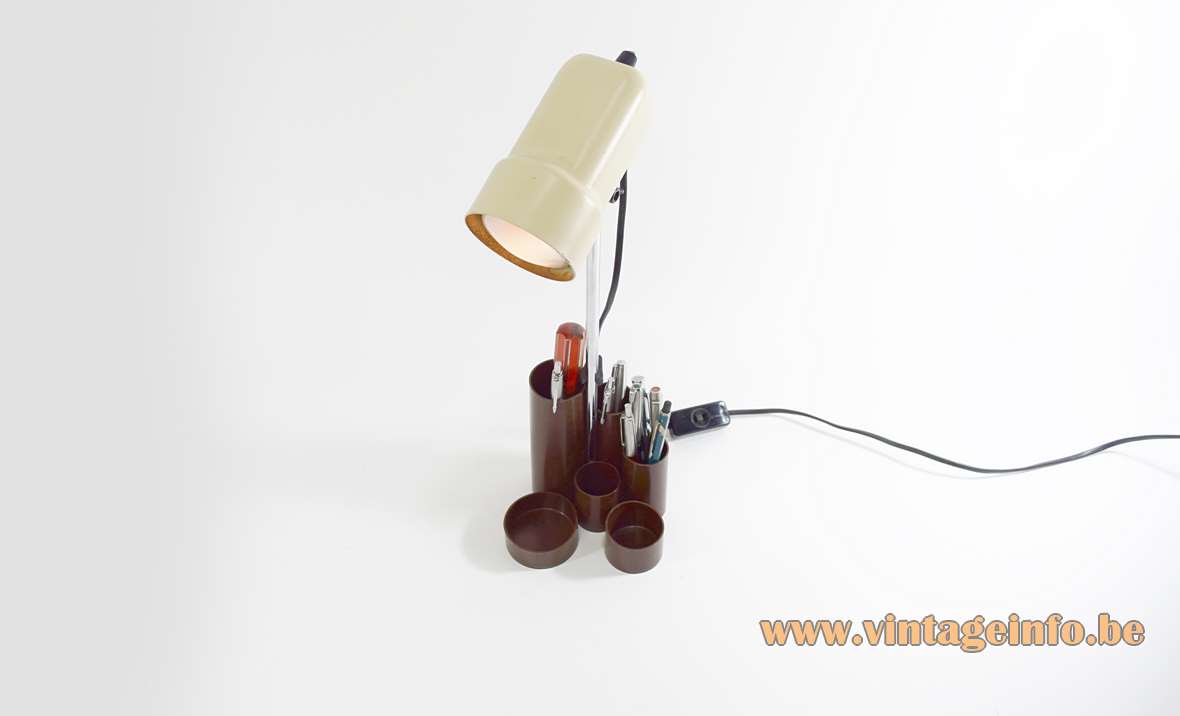 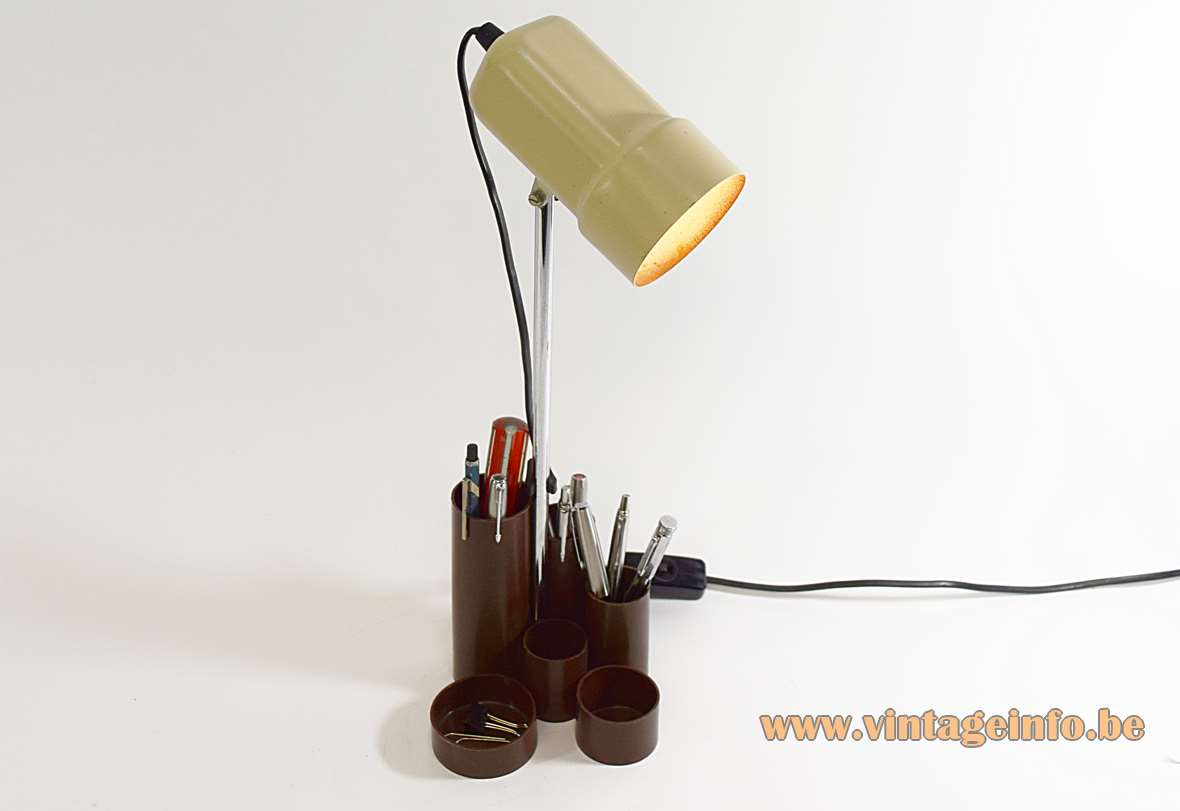 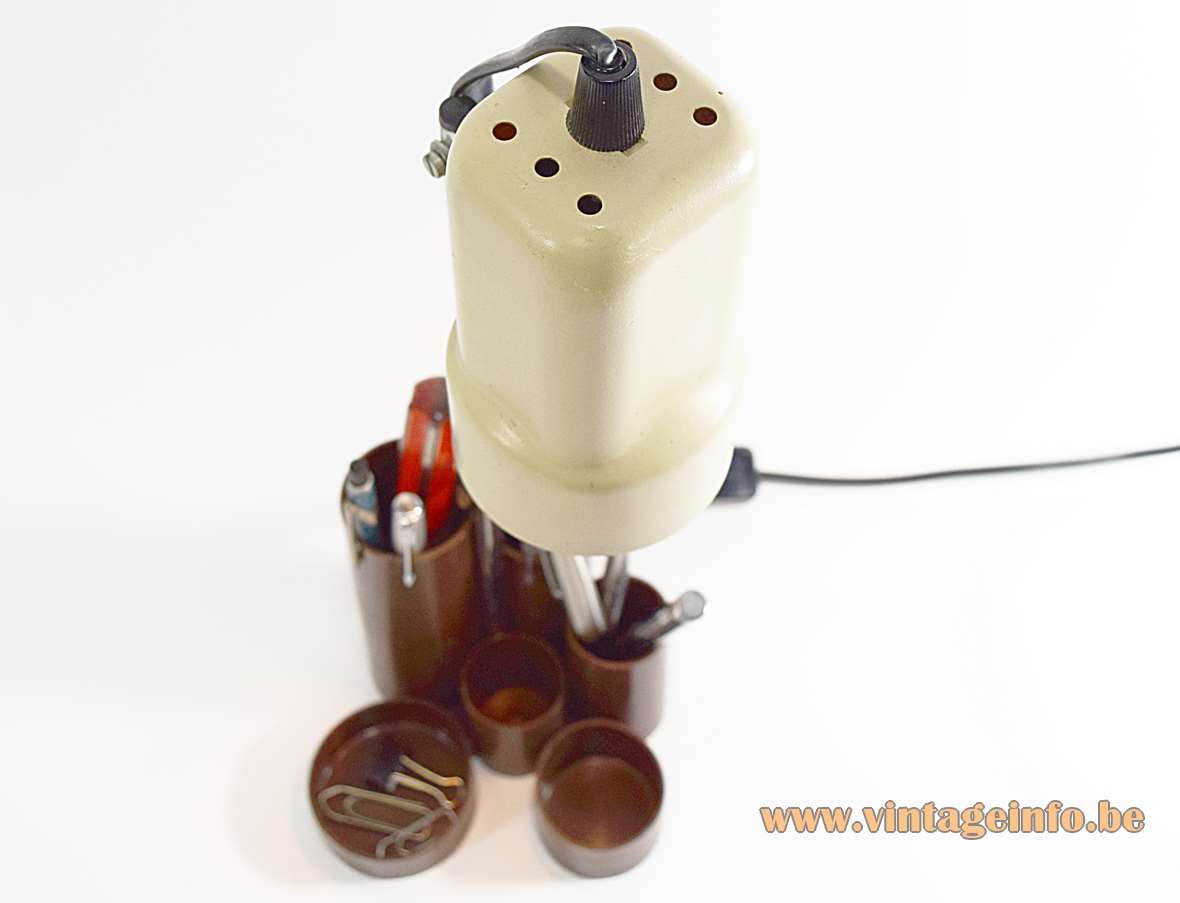 A desk lamp with the same lampshade, but a perforated one, was used as a prop in the 2008 British fantasy crime drama and police television series Ashes to Ashes. Here in episode 2 of the second series from 2009. Starring: Philip Glenister, Keeley Hawes and Dean Andrews.

The base of this lamp was used for several other lamps. This desk lamp is from the 90s. The TV series is set in 1982. Several other lamps appear in this series. Lamps by IKEA from 2007, for instance… 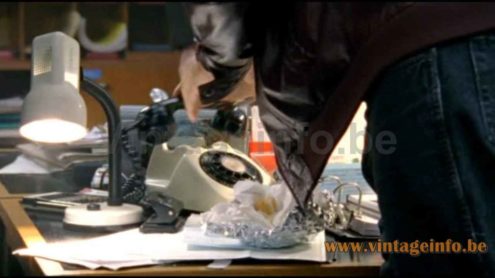 Other versions: This 1970s pen tray desk lamp exists in several colours. The lampshade was also used for desk lamps and floor lamps. The lampshade also exists with perforations, as you can see in the movie. It was used for more than 20 years for many lamps.

In The Netherlands these desk lamps were also sold by Vrieland Design, a company active in the 1970s and 1980s. In Belgium by Massive. In Spain it was Fase who sold floor lamps and desk lamps with this lampshade. And in Germany also the Graewe company sold them.

The pen tray exists in many colours and a few variations and was also sold without a lamp.

Fischer Leuchten was founded in 1951 by Aloys Fischer in Sundern, in North Rhine-Westphalia, Germany. Johannes Schulte joined the company as a full partner in 1953. In 1972 the enterprise moved to another building in the same town. In 1993 Johannes Schulte junior and in 1995 Alois Fischer junior joined the company. Today the firm is located in Arnsberg, some 15 km (9 miles) from Sundern. Recently (2019), the company merged with Honsel Leuchten to form Fischer & Honsel GmbH.

This Fischer Leuchten desk lamp recalls the primary colours used by artists such as the Dutch Piet Mondriaan and Gerrit Rietveld.

Fisher Leuchten also produced this lamp for other brands, such as Fase, IKEA, Veneta Lumi and Massive from Belgium.

The electric parts (plug, switch, wire, socket) are Italian and made by VLM Components from Buccanisco, near Milan. The company is famous for the switches they produced designed by Achille Castiglioni.

The town of Sundern – Wikipedia