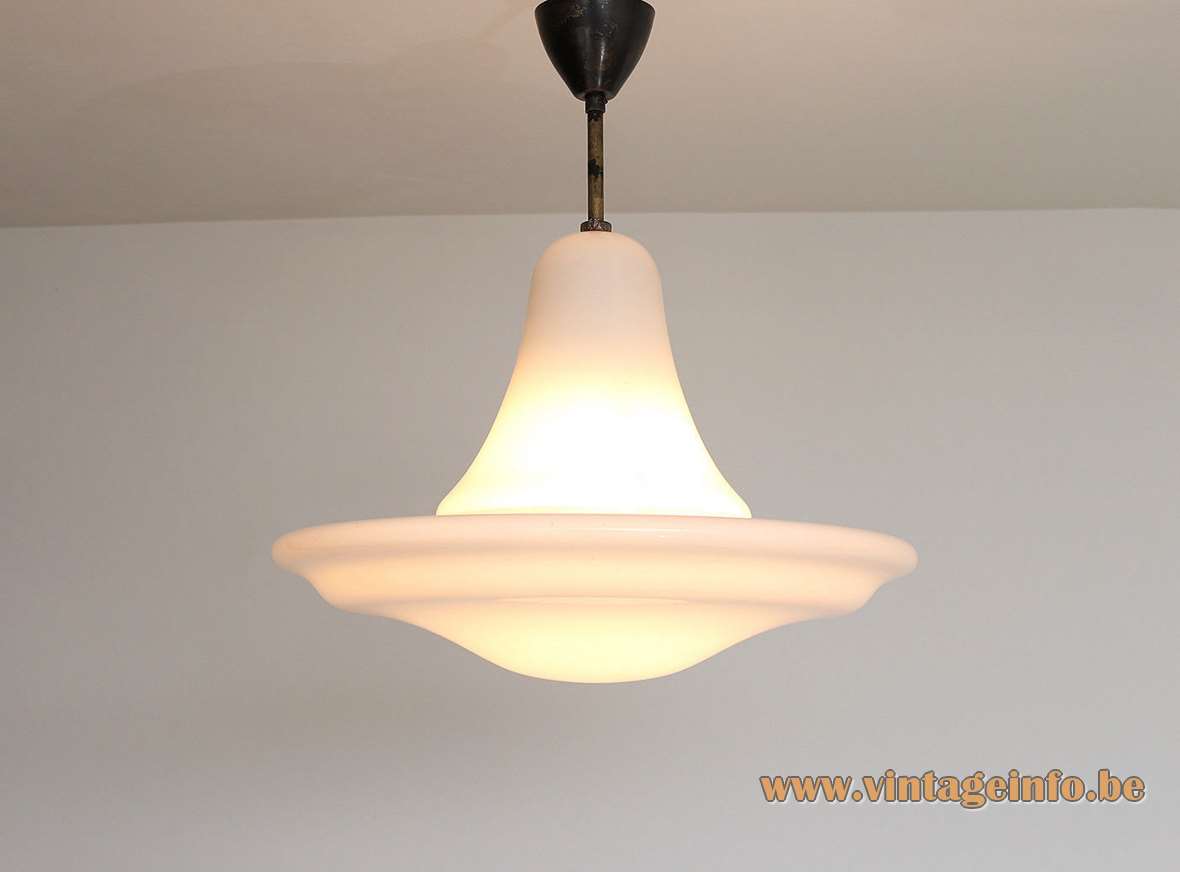 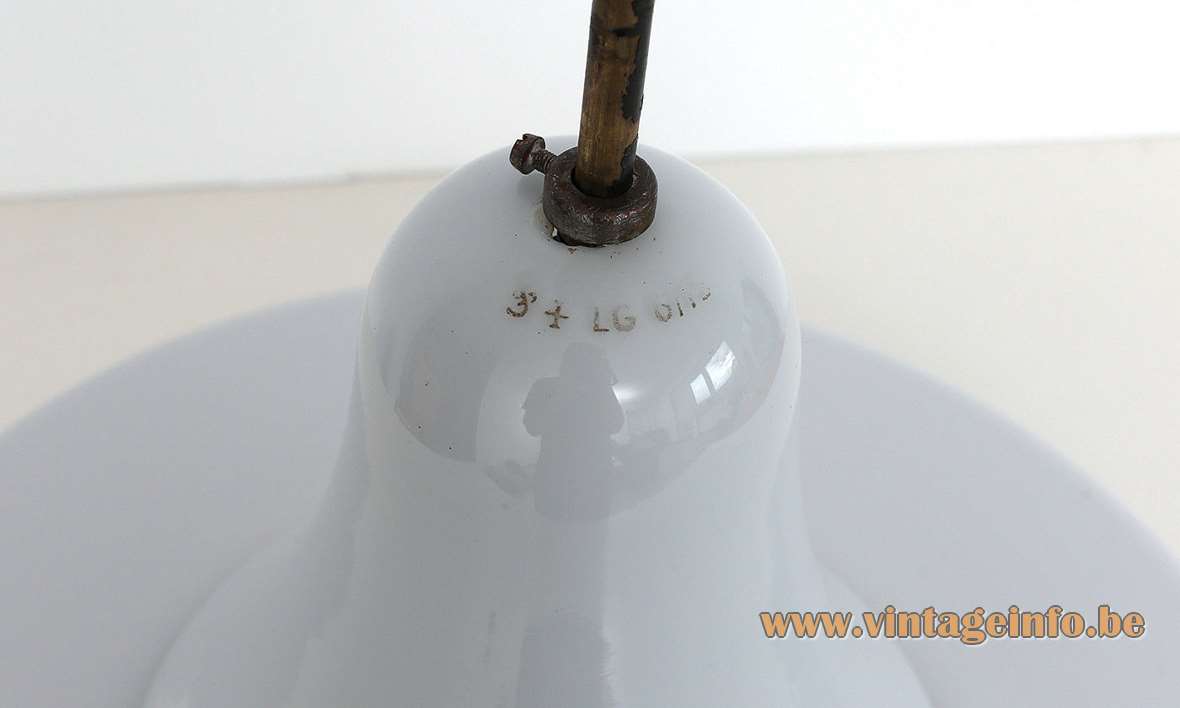 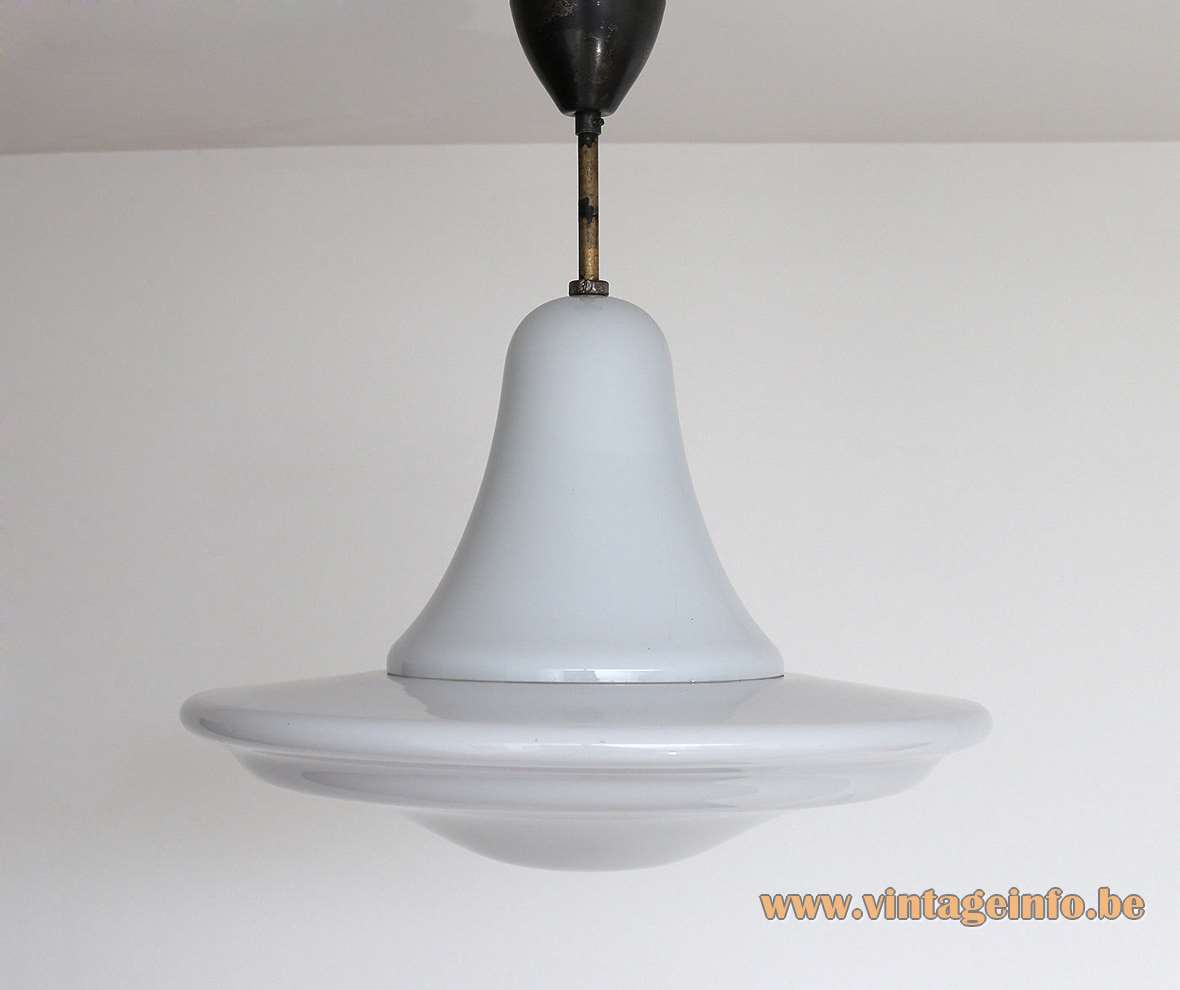 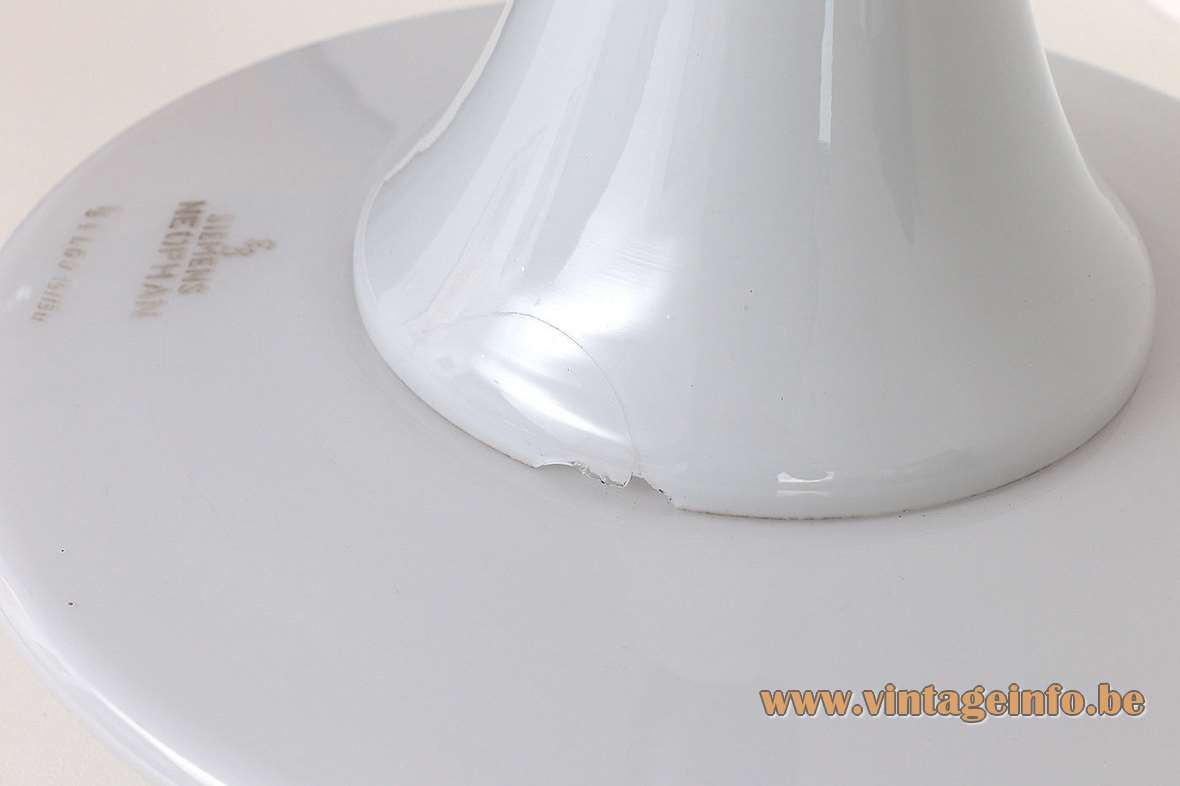 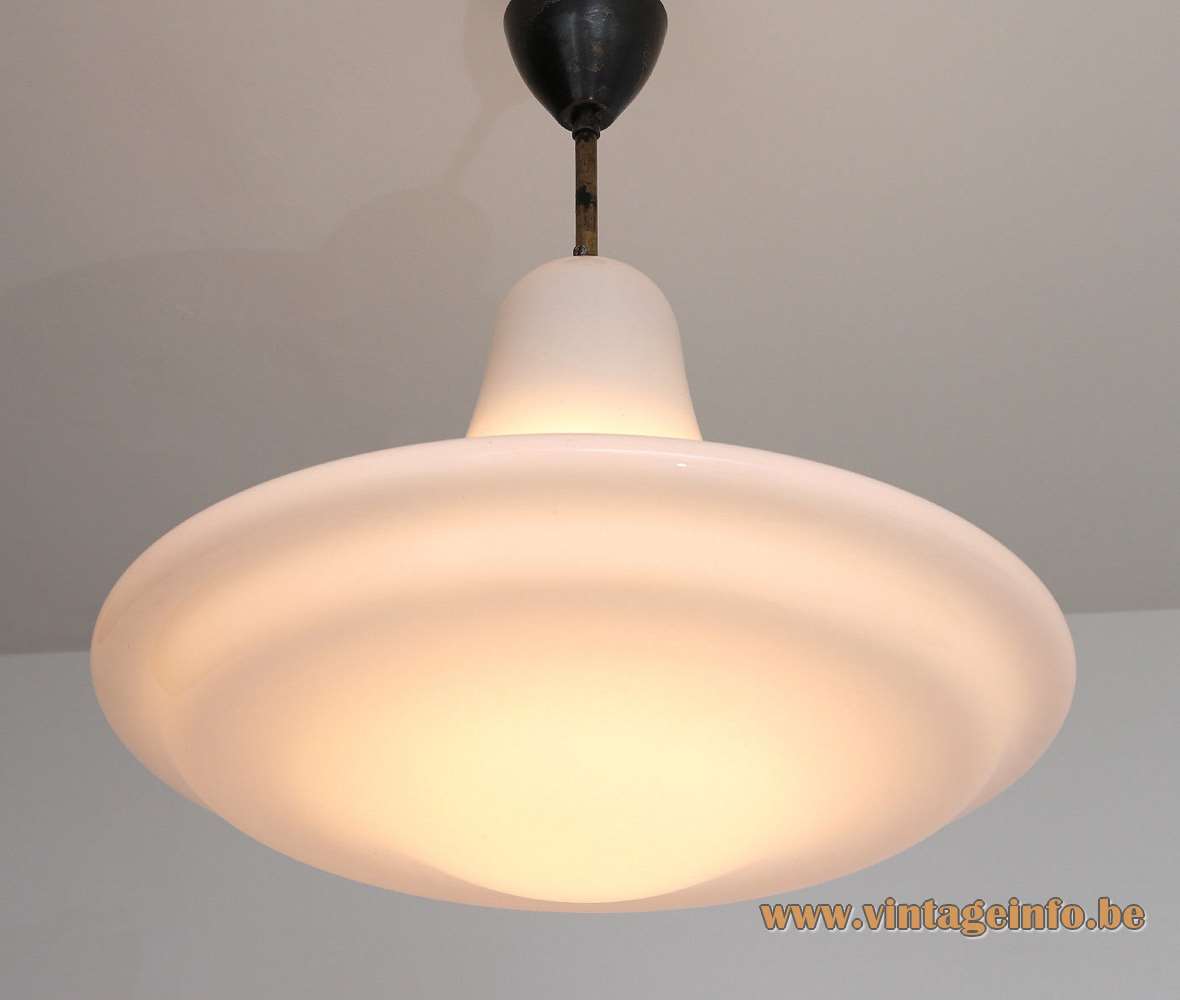 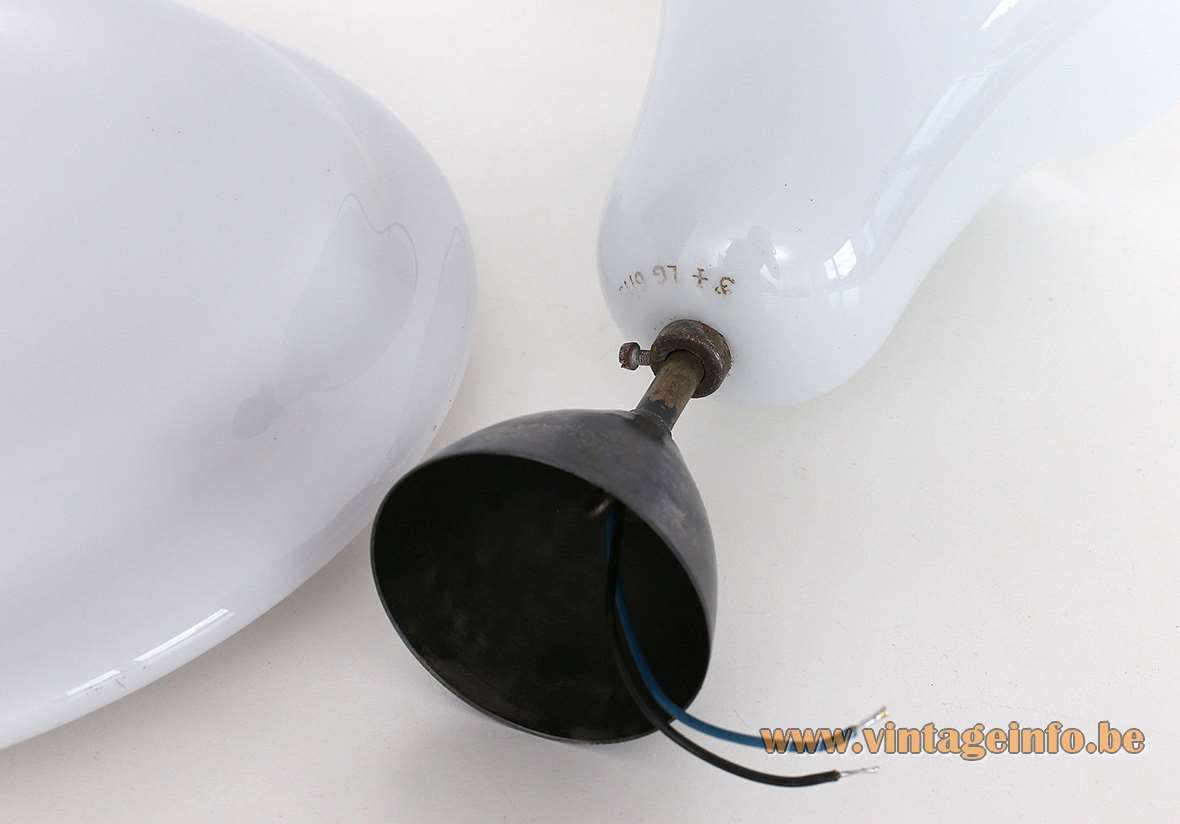 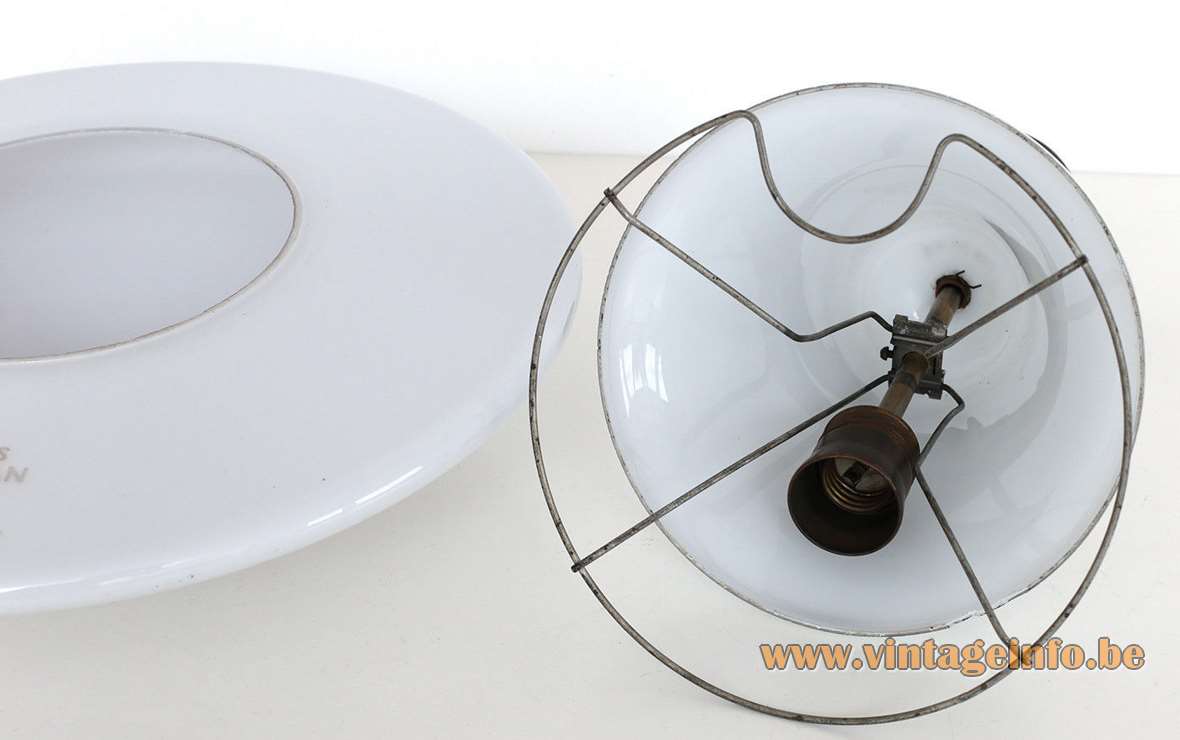 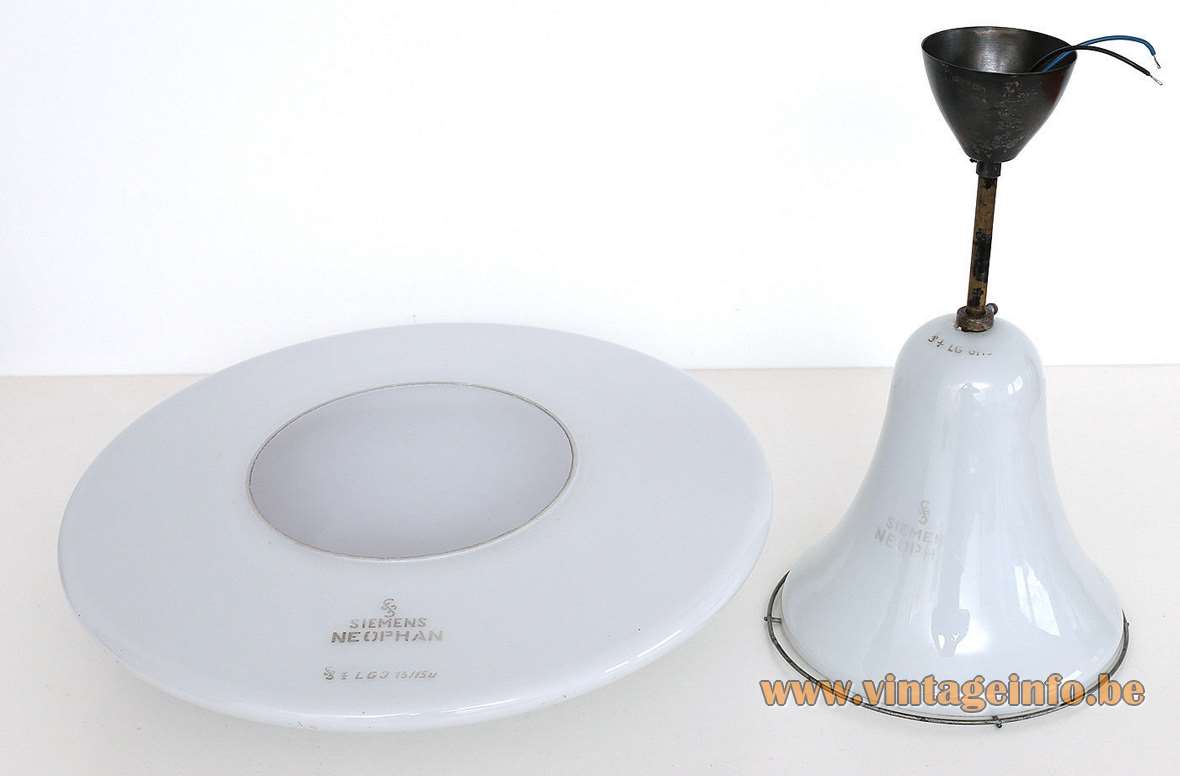 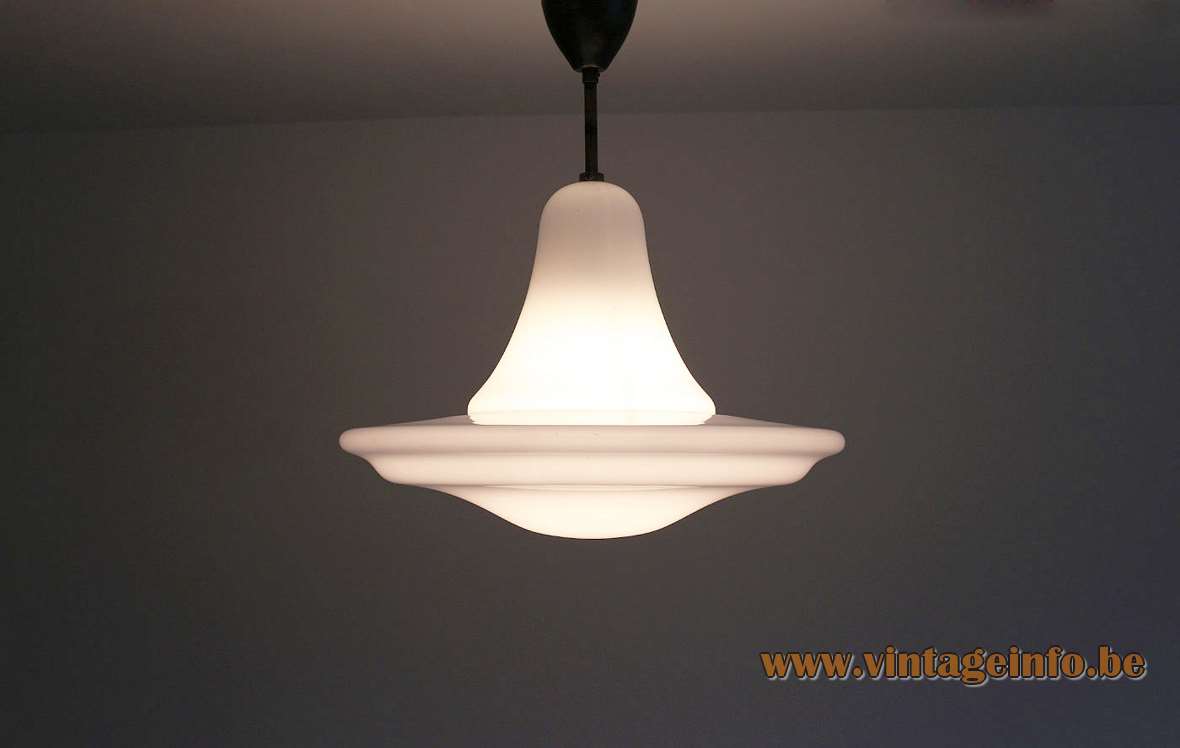 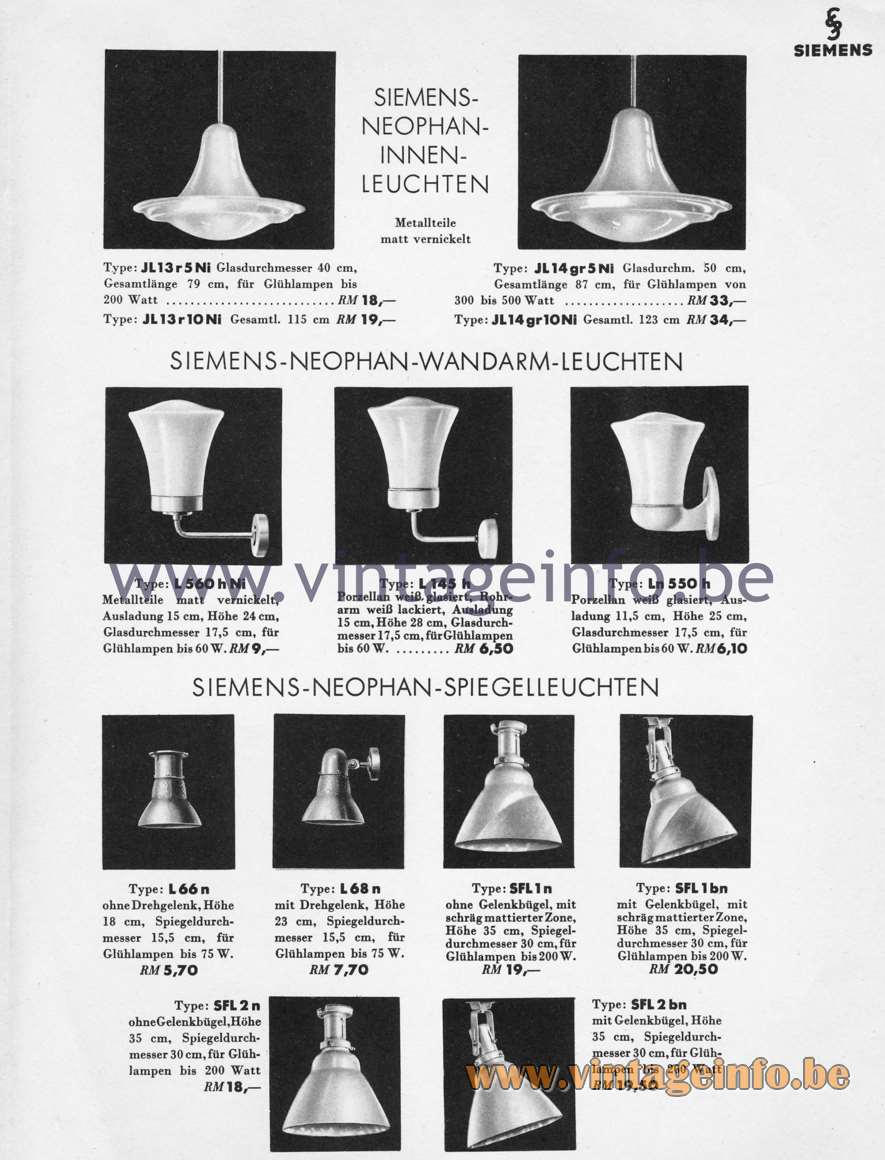 Other versions: This Siemens Neophan pendant lamp is model nr. JL13r5NI. The version of ∅ 50 cm / 19.68” is model nr. JL14gr5NI. Also the glass parts have numbers for easy replacement. They were made in the interwar period.

Neophan was also the name of a German brand that produced glasses for the Luftwaffe, the German air force. It was the equivalent of Rayban in Germany during the Third Reich. They made all kinds of optical lenses, sunglasses, goggles and eye protective devices.

Always said that Peter Behrens designed this lamp and several others, but he never designed lamps for Siemens.

Peter Behrens was a German architect and designer born on 14 April 1868. He studied painting in Hamburg, Düsseldorf and Karlsruhe.  At first, he worked as an illustrator, painter and bookbinder.  He was one of the leaders of architectural reform and was a major designer of factories and office buildings.

In 1907, AEG retained Behrens as artistic consultant. He designed the entire corporate identity such as the logo, product design, publicity, lighting, etc. He is considered the first industrial designer in history. Behrens was never an employee for the company, only artistic consultant.

From 1907 to 1912, he had students and assistants, and among them were Le Corbusier, Walter Gropius, Jean Kramer, Adolf Meyer and Ludwig Mies van der Rohe.

Publicity Text from the 1930s – translated from German

Properties and effect of the Siemens Neophan lights

Many hours of the day must see our eyes in artificial light. The most common and perfect artificial light source is the electric light bulb. Their spectrum contains essentially all the colours of daylight, but quantitatively in a different composition.

In particular, the proportion of yellow and red light rays is greater than in daylight. Since the human eye is most sensitive to the yellow rays of light, all colours in the incandescent light appear to be at a disadvantage in favour of the yellow colour component.

This impairment of the colour effect can be avoided if we let incandescent lamps out of the novel, because the special glass of these lights contains, among other things, an addition of neodymium oxide, which partially absorbs the excess of yellow incandescent light.

All other colour components of the light bulb spectrum, on the other hand, are not influenced. In the light of the Siemens Neophan lights, the eye sees again the colours in their naturally bright freshness. The light is therefore not coloured by filters, but its beautifying effect is based on an increase in colour saturation by absorbing the disturbing yellow content.

Externally, the Siemens Neophan interior lights differ from the normal opal glass luminaires only in their architecturally beautiful form, which, however, has nothing to do with the colour effect itself.

Coloured objects, foods, fruits, goods of all kinds, and even the colour tones of human skin, are enhanced by the colour contrasts in the light of the Siemens Neophan lights. Neophan lights are used as wall and interior lights as well as showcase mirror lights.

Siemens-Schuckert build a number of heavy bombers early in World War I. In 1936 the airplane part of company reorganised and became Bramo, the Brandenburgische Motorenwerke and were purchased in 1939 by BMW (Bayerische Motoren Werke) to become BMW Flugmotorenbau. 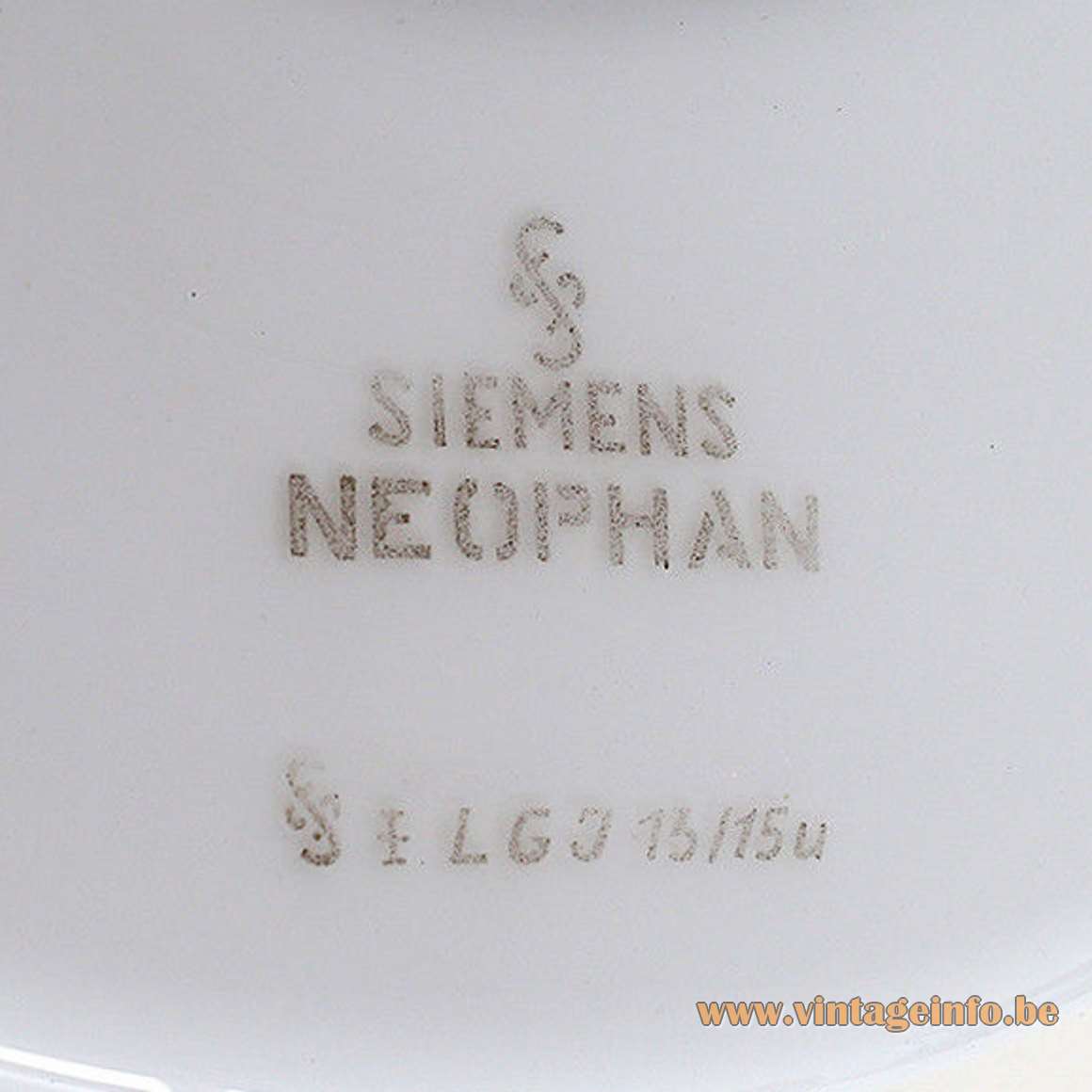 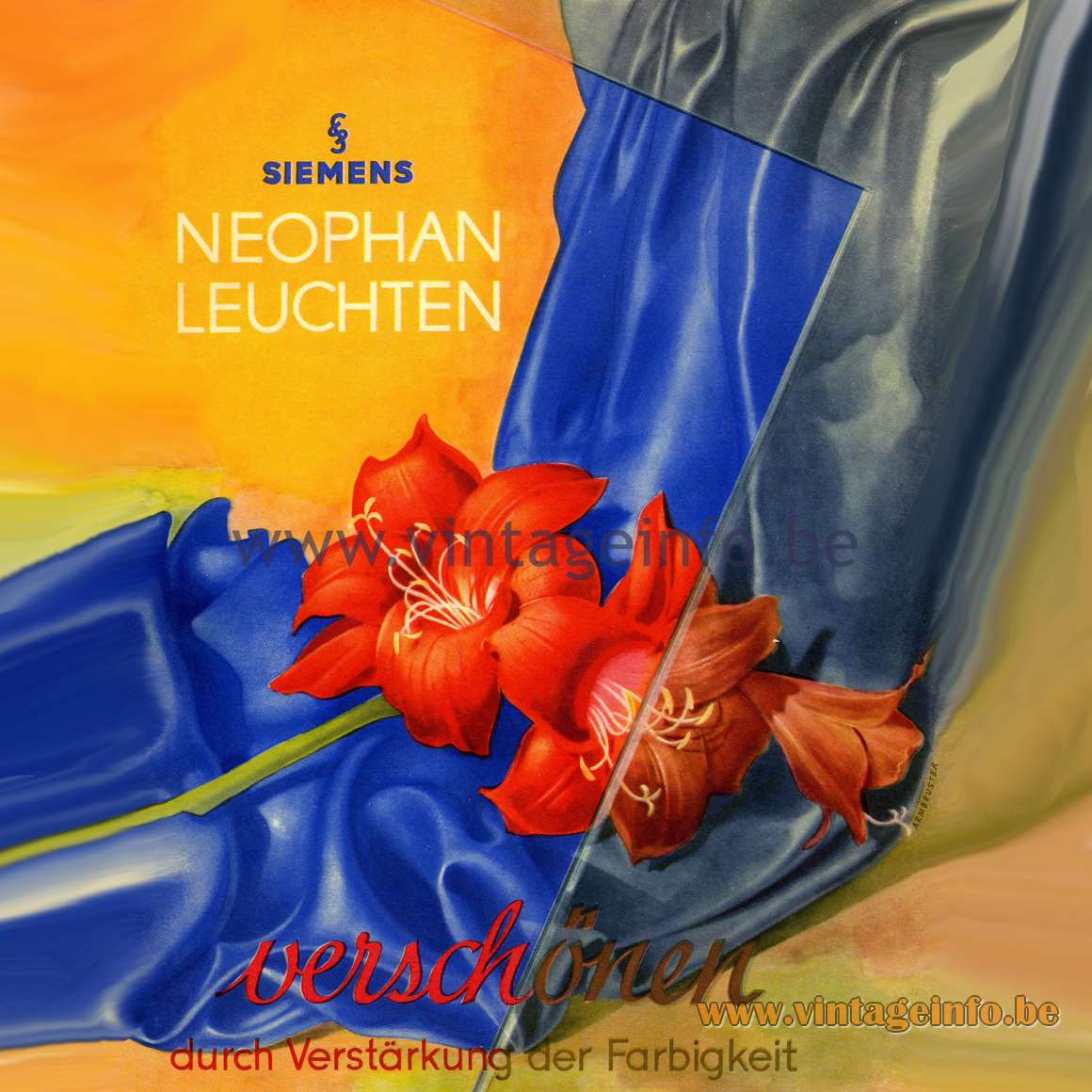