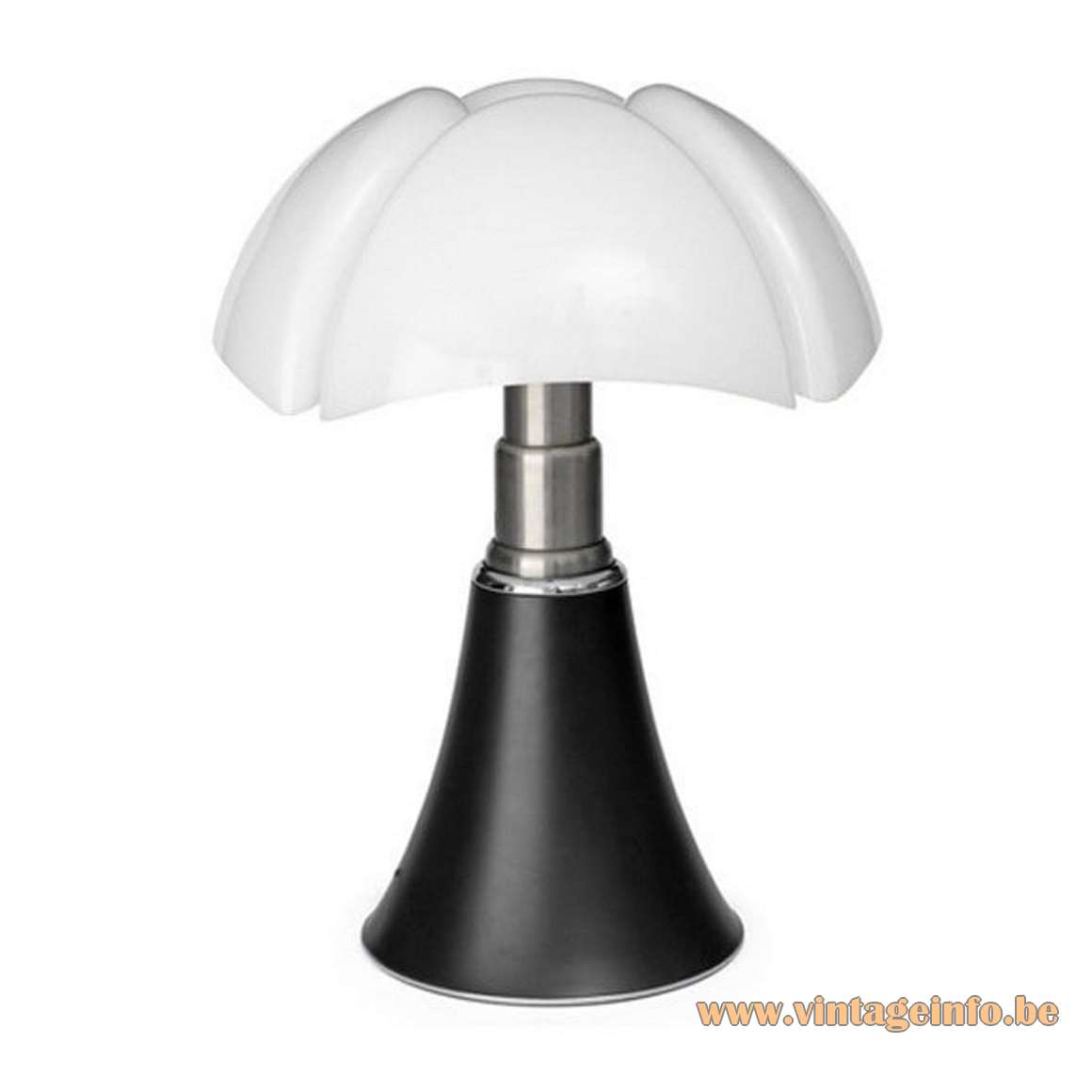 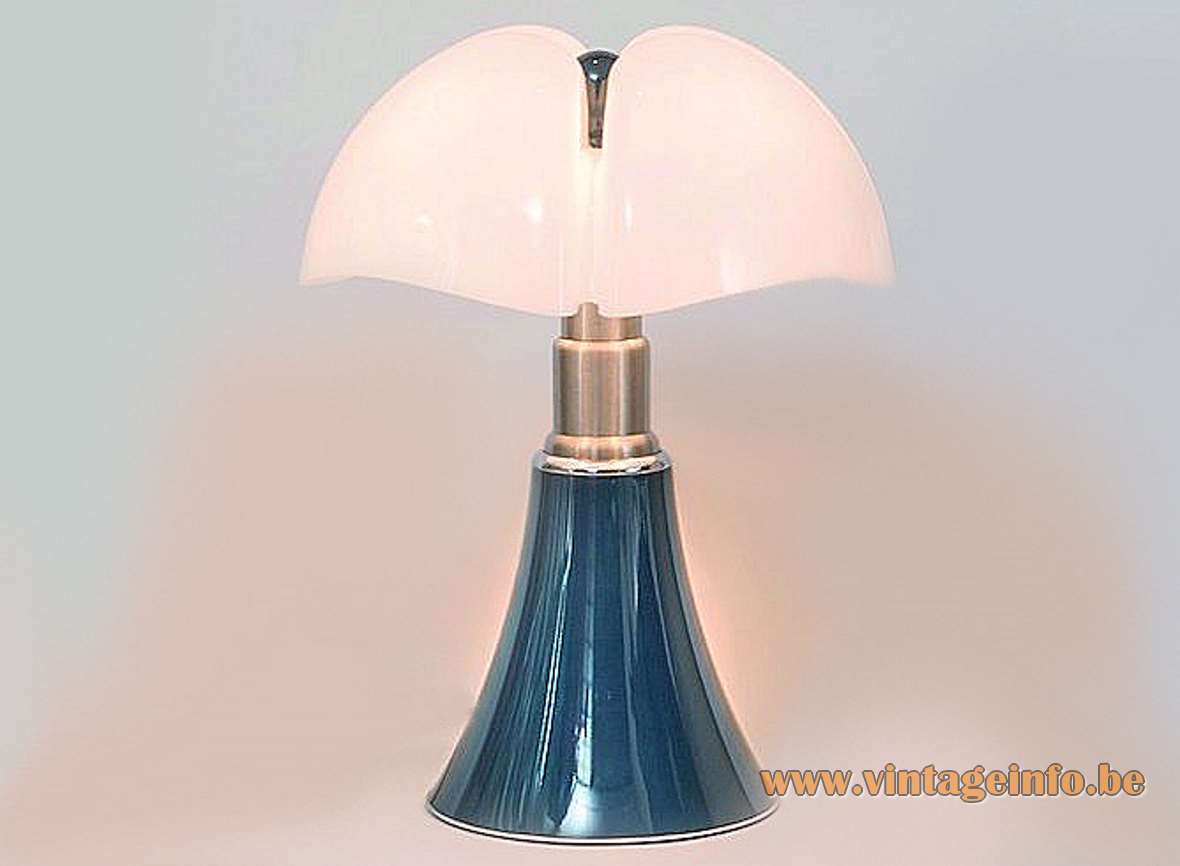 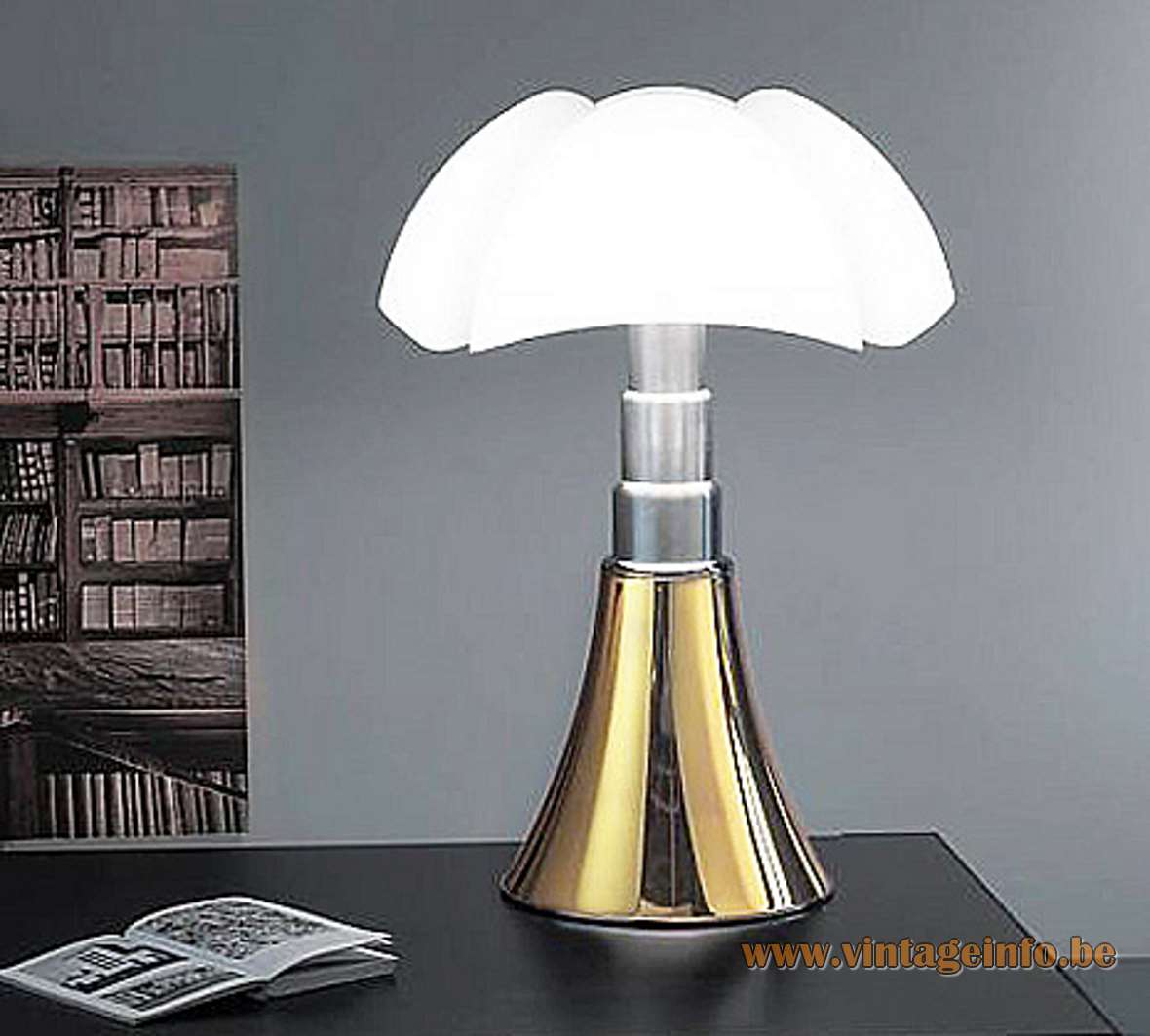 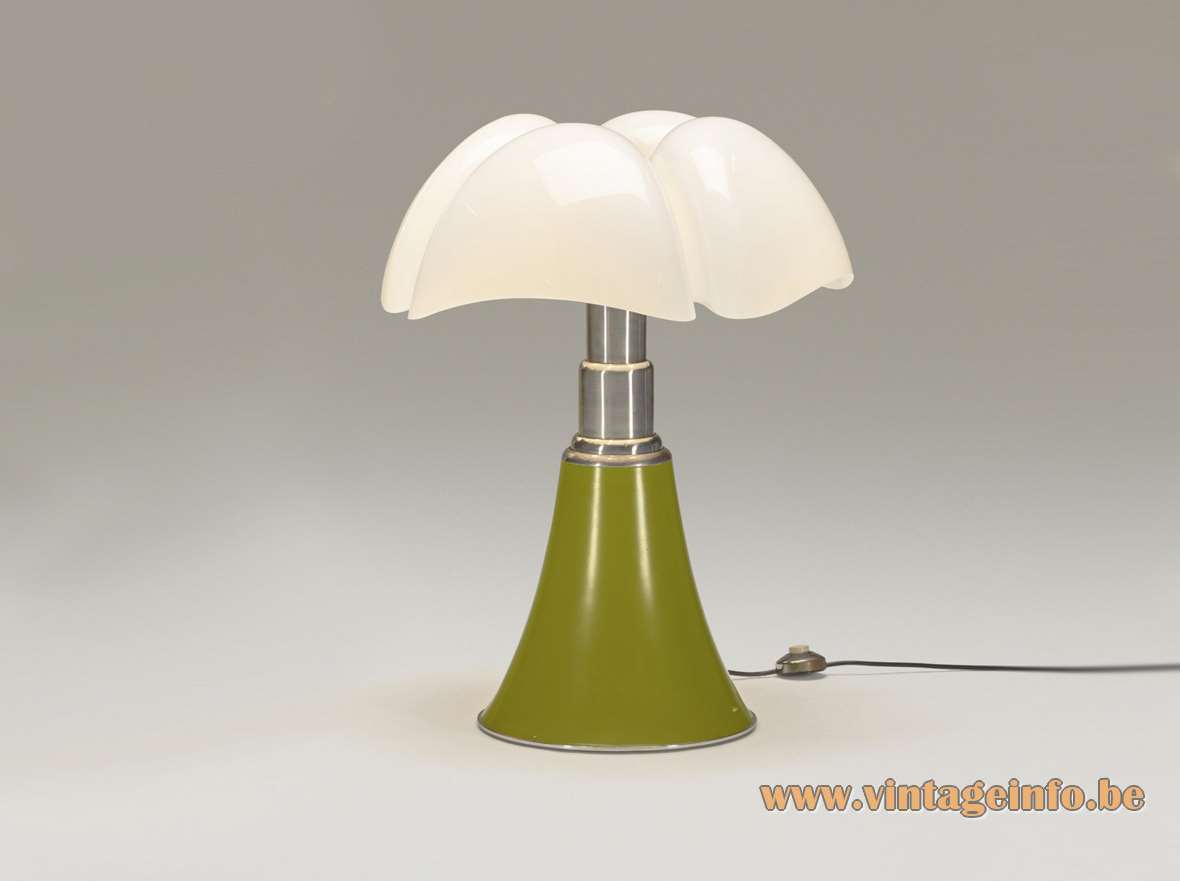 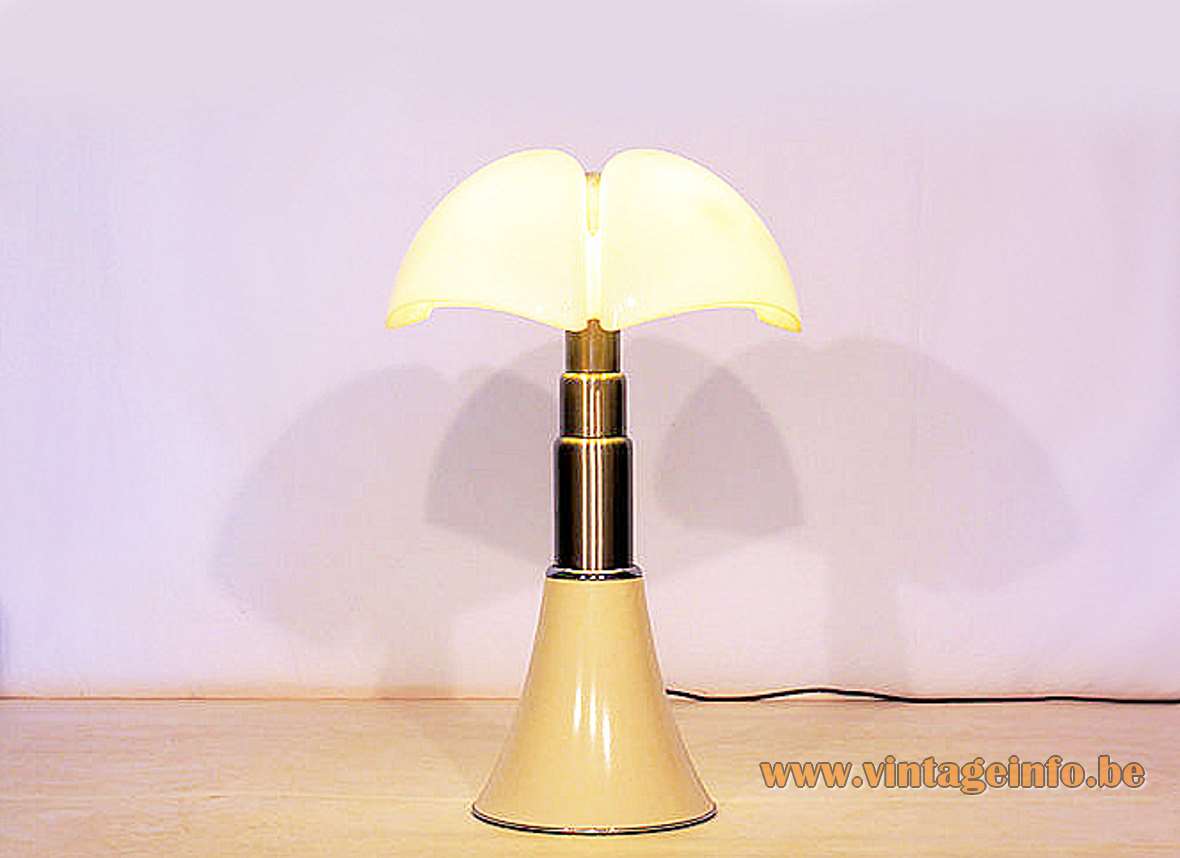 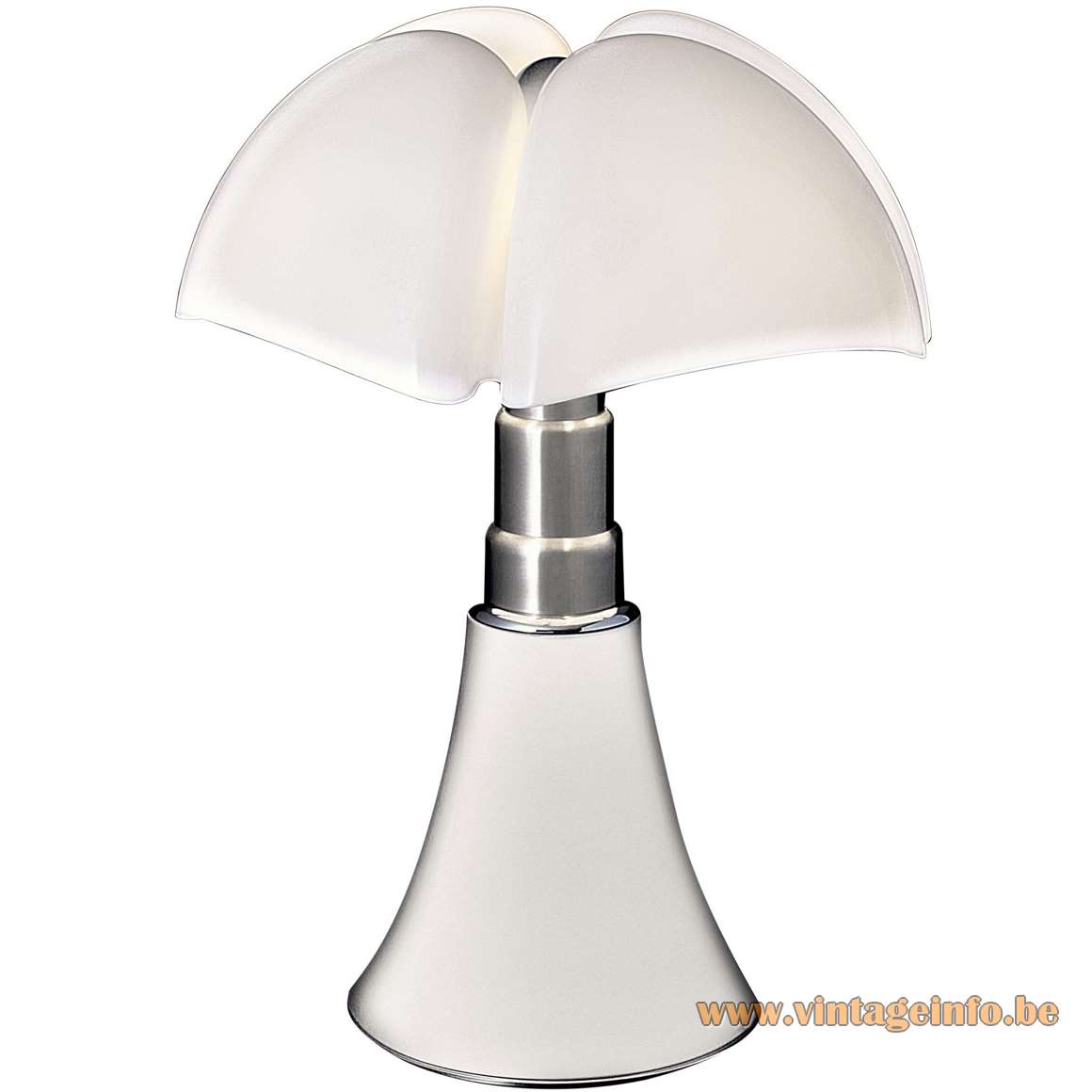 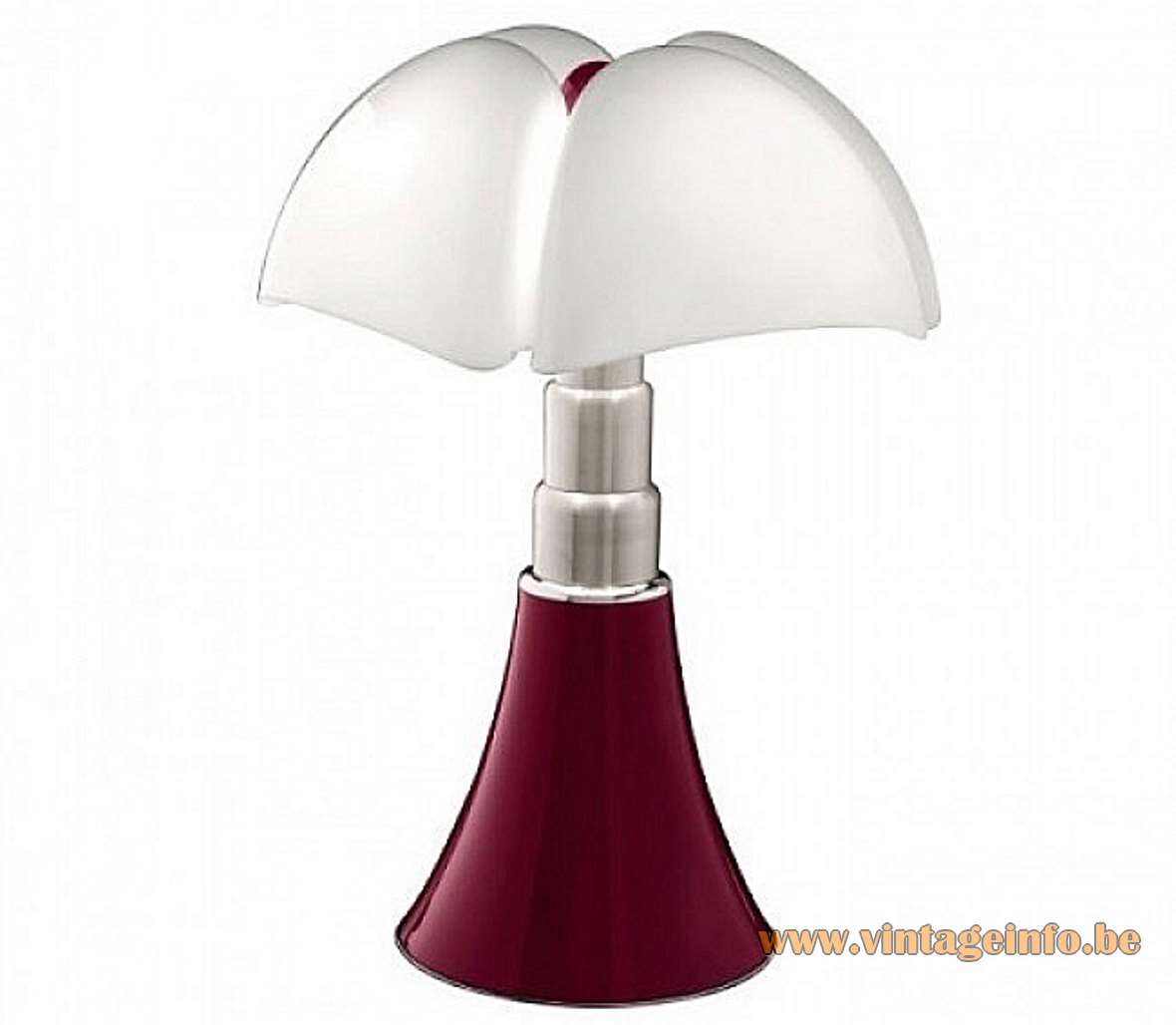 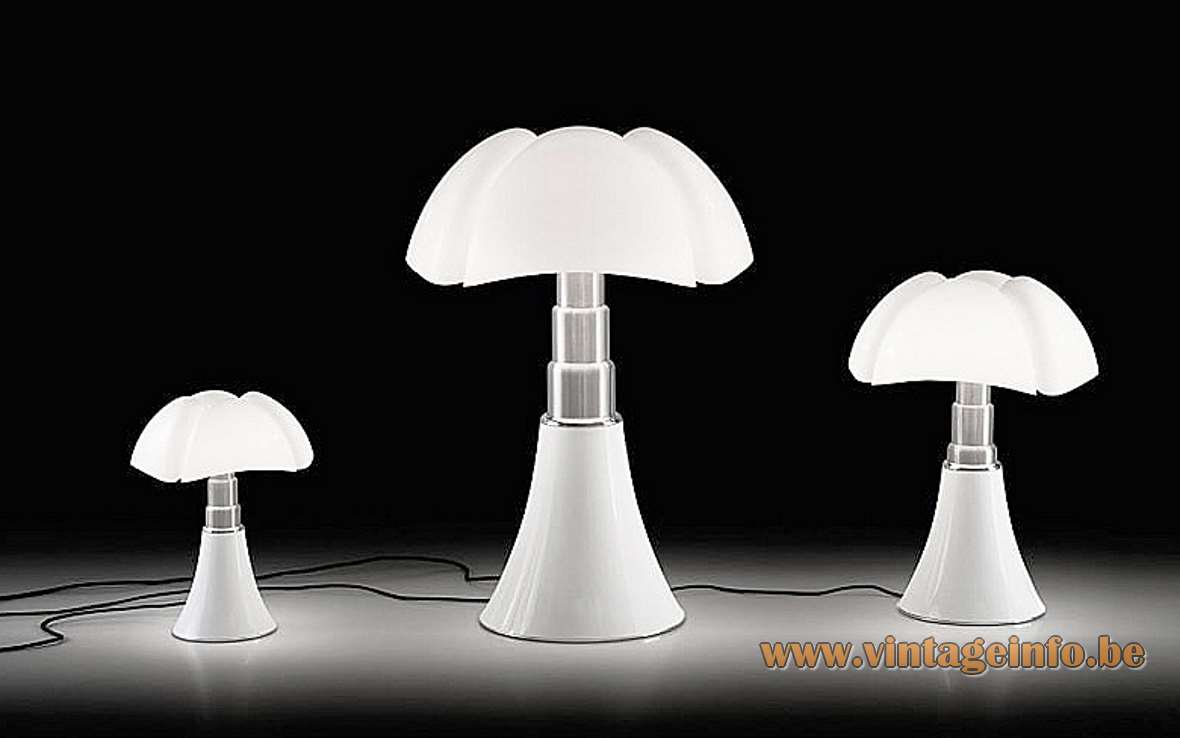 A Martinelli Luce Pipistrello table lamp was also used as a prop in the 2018 French film Gaston Lagaffe. It is a movie made after the gag-a-day comic strip created in 1957 by the Belgian cartoonist André Franquin. Staring Théo Fernandez, Pierre-François Martin-Laval and Arnaud Ducret. 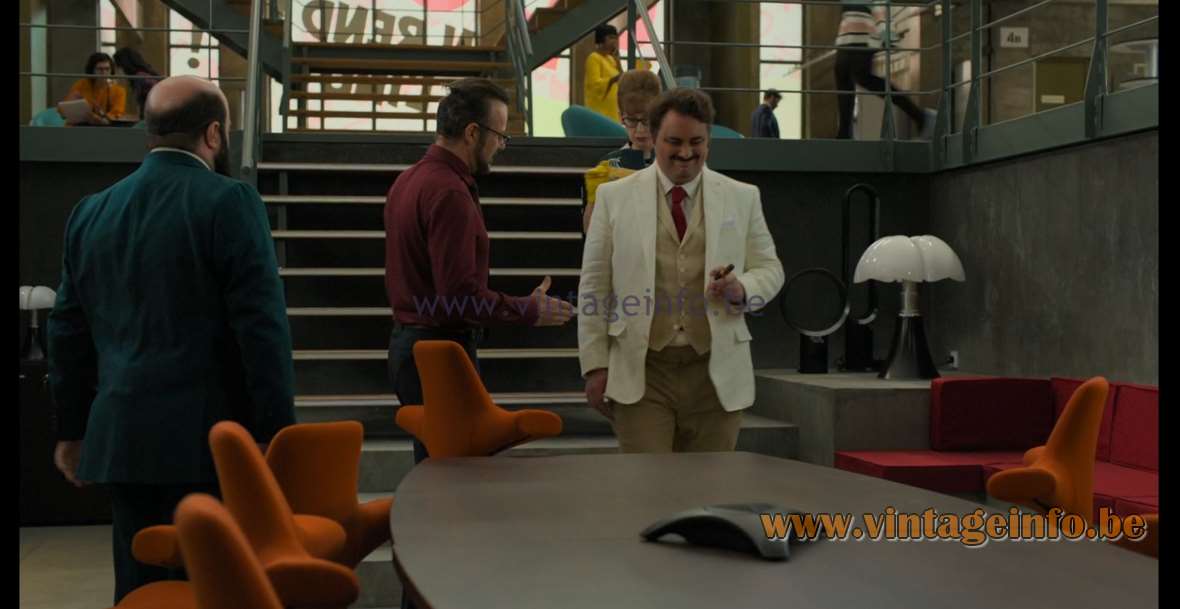 A Martinelli Luce Pipistrello table lamp was also used as a prop in the 2001 French comedy film Tanguy. Starring Sabine Azéma, André Dussollier and Éric Berger. Also a Ruspa table lamp, also designed by Gae Aulenti appears in the movie. This together with many other lamps. You can watch the complete film below on YouTube. 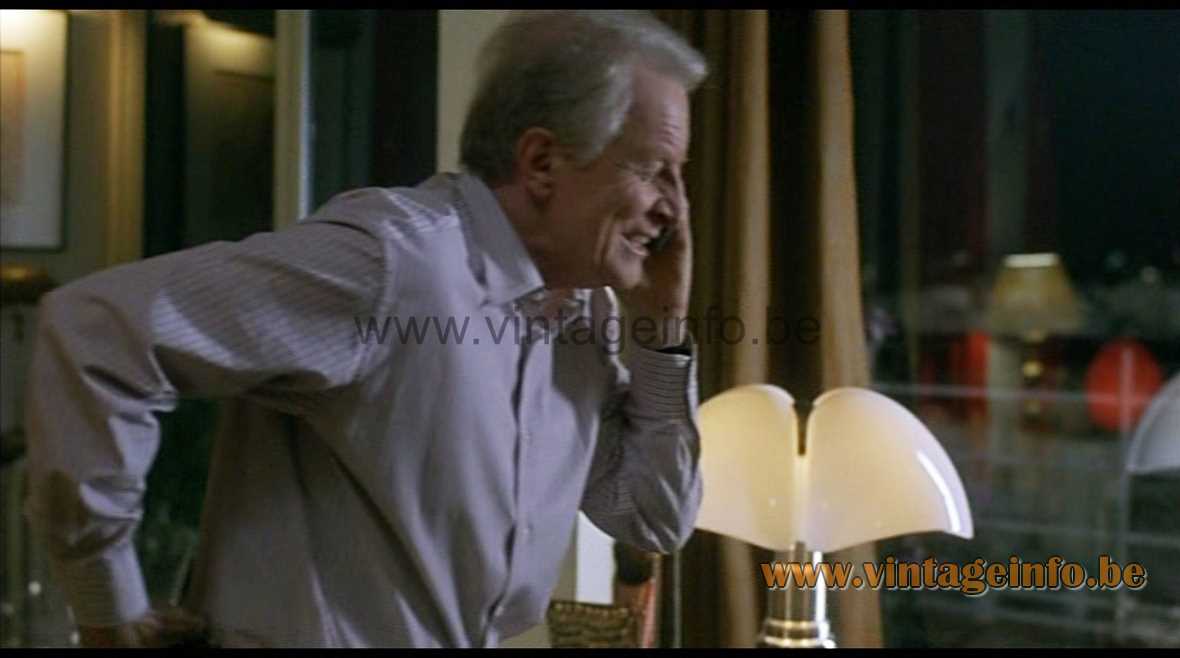 A Martinelli Luce Pipistrello table lamp was used as a prop in the 2019 Spanish drama film Dolor Y Gloria (Pain And Glory) directed by Pedro Almodóvar. Starring Antonio Banderas, Asier Etxeandia and Penélope Cruz. It was chosen by Time magazine as the best film of the year. Many beautiful lamps appear in this film. Not to mention the rest of the interior. In another scene a Pipisterello Med appears, as you can see in the photo below. 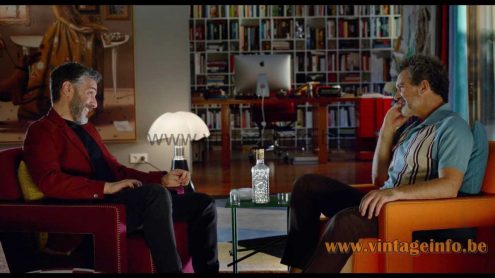 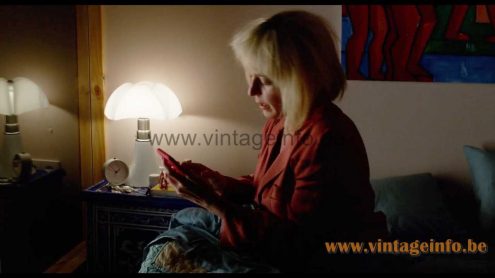 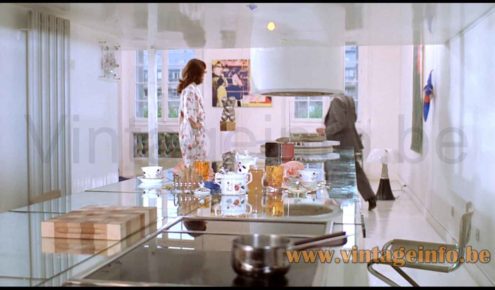 A Martinelli Luce Pipistrello table lamp was used as a prop in the 2021 Italian film Appunti Di Un Venditore Di Donne (Notes Of A Female Salesman). Starring Mario Sgueglia, Miriam Dalmazio and Libero De Rienzo. Many other Italian lamps appear in this movie.

2 Martinelli Luce Pipistrello table lamps were used as a table lamp in the 2021 American biographical crime drama film House of Gucci. Starring: Lady Gaga, Adam Driver, Jared Leto and several other famous stars. Many other beautiful lamps appear in this movie. But sometimes time travellers pass by. For example, a lady is playing on the dance floor in a disco in the 70s with a plastic LED globe lamp that changes colour all the time. Some recent Chinese gadget. LED already existed, but could not change colour yet. Also a black Cobra table lamp appears in it in a slightly changed interior. In another scene a white one was used.

Other versions: The Martinelli Luce Pipistrello table lamp was made in many colours over the years. Today (2020) available in 5 colours: dark brown, white, purple red, glossy black, satin aluminium. 4 different lamps exist: This lamp, a medium size lamp, the Pipisterello Med, the Minipipistrello and the cordless version of the Minipipistrello.

Pipistrello is the Italian word for bat.

Gae Aulenti designed lamps for among others: Artemide, Vistosi, Candle, Fontana Arte, iGuzzini, Poltronova, Stilnovo and of course Martinelli Luce. She also designed the Ruspa table lamp in 1968 for Martinelli Luce, as you can see on the left. Another table lamp that is still in production (2018).

Aulenti received many awards for her designs and she is seen as one of the greatest Italian designers after World War II. Gae Aulenti passed away in Milan on 31 October 2012, she was 84.

Elio Martinelli was born in Lucca, Tuscany in 1921. He studied as a set designer at the Institute of Fine Arts in Florence. At first he worked for  his father’s business within the lighting sector. Soon he began designing and installing his own lighting systems what resulted in the founding of his own company Martinelli Luce in 1950.

His works are on display in many design museums around the world. Martinelli worked until his dead in 2004 for the company.

Sergio Asti was born in Milan, Italy in 1926. He studied at the same school as Gae Aulenti, the Politecnico di Milano (Milan School of Architecture of the Polytechnic University). After graduating in Architecture in 1953, he spent five years as Assistant Professor of Interior Design. He is one of the founders of the ADI, the Associazione per il Disegno Industriale (Association for Industrial Design).

Many objects designed by Sergio Asti are present in the collections of the most important museums around the world and he received numerous awards.

He designed lamps for Artemide, Candle, FontanaArte, Raak, Knoll International, Arteluce, Kartell, Bilumen, C.I.L. Roma, Poltronova, Martinelli Luce and several others. In 2018 still in production by Martinelli Luce: the Scafandro table lamp and the Profiterole table lamp, as you can see on the left. 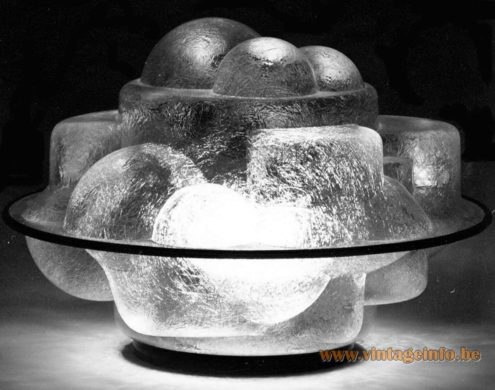 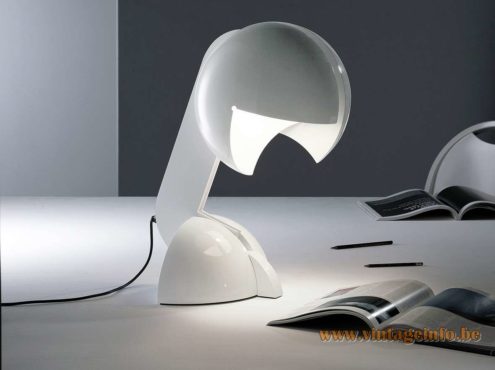 A Martinelli Luce Pipistrello table lamp appears in an advertisement for Resi. Resi is a Belgian brand of frying fat produced by Vandemoortele. The photo was taken at the home of famous bicycle racer Eddy Merckx in the 1970s. Eddy Merckx is still the proud owner of this Martinelli Luce Pipistrello table lamp. Here together with his wife in the picture. “Ik eet graag frieten. Maar ze moeten licht zijn”: I like to eat french fries. But they must be light. 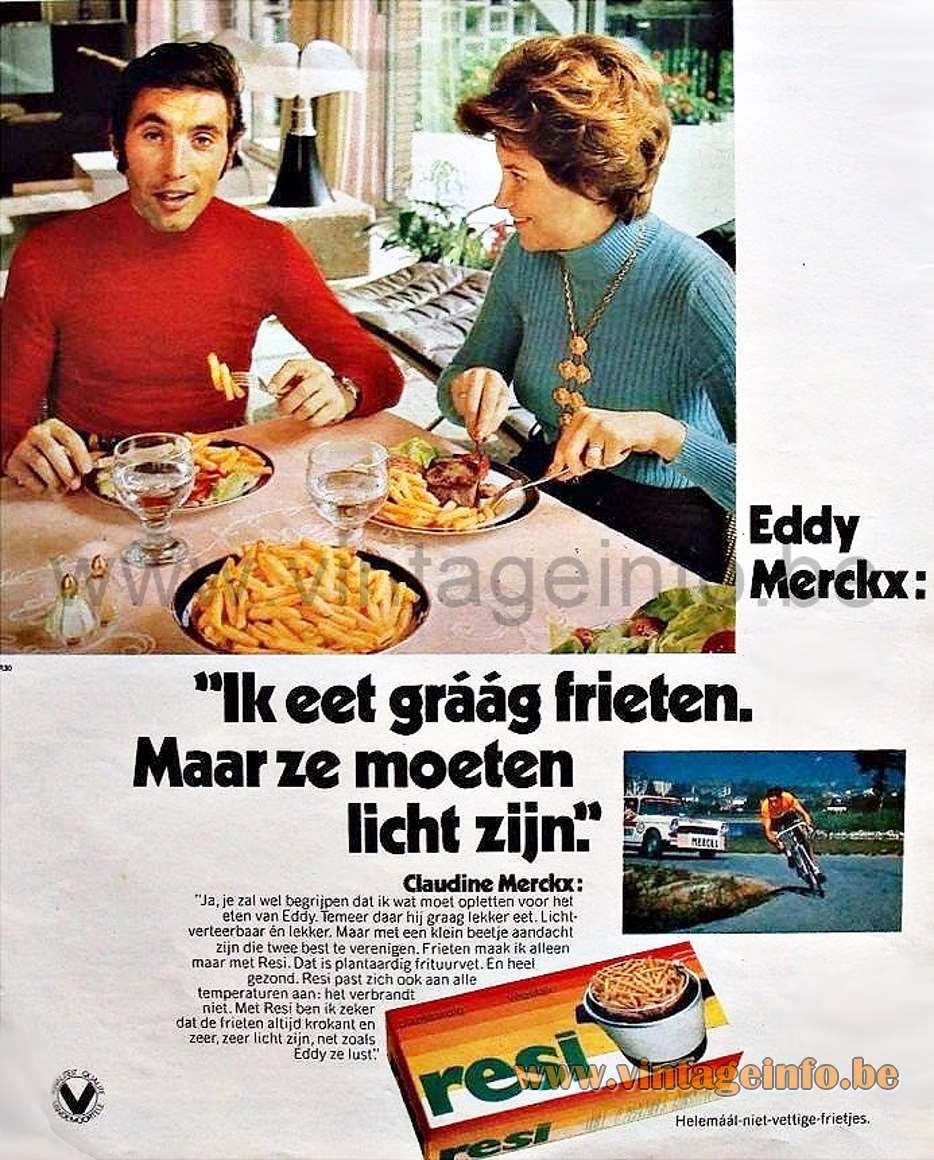 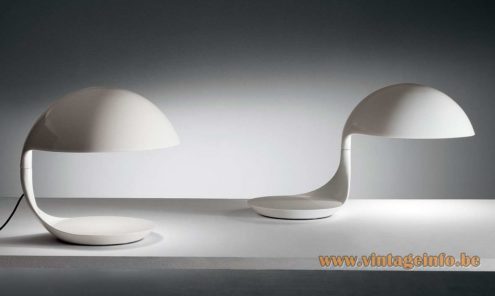 Many thanks to Martinelli Luce and Chicca Manca – CeG Maxicom for the information and photos.

Many thanks to Steven for the Resi advertisement scan. And many thanks to Colin and Staf for the screenshots of the films.