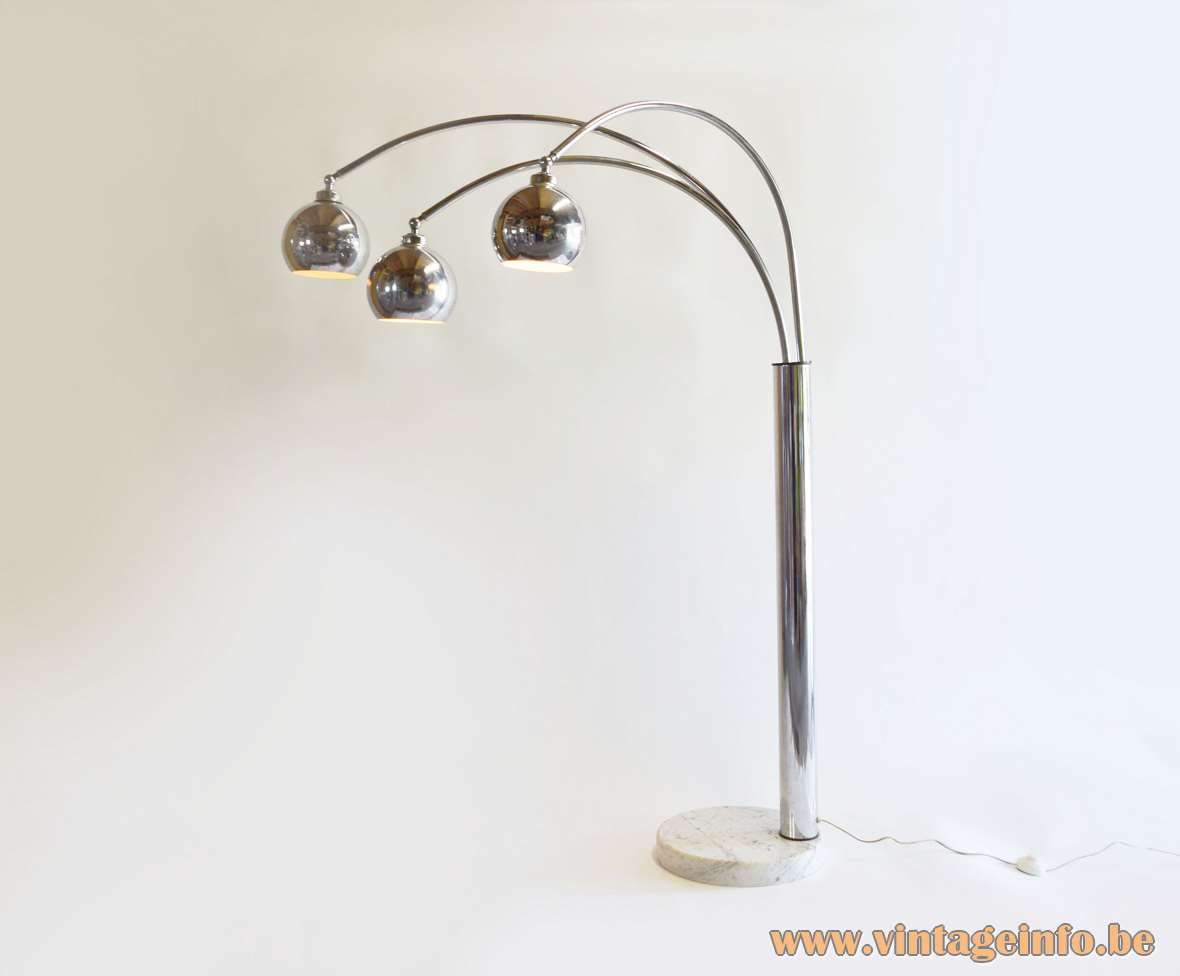 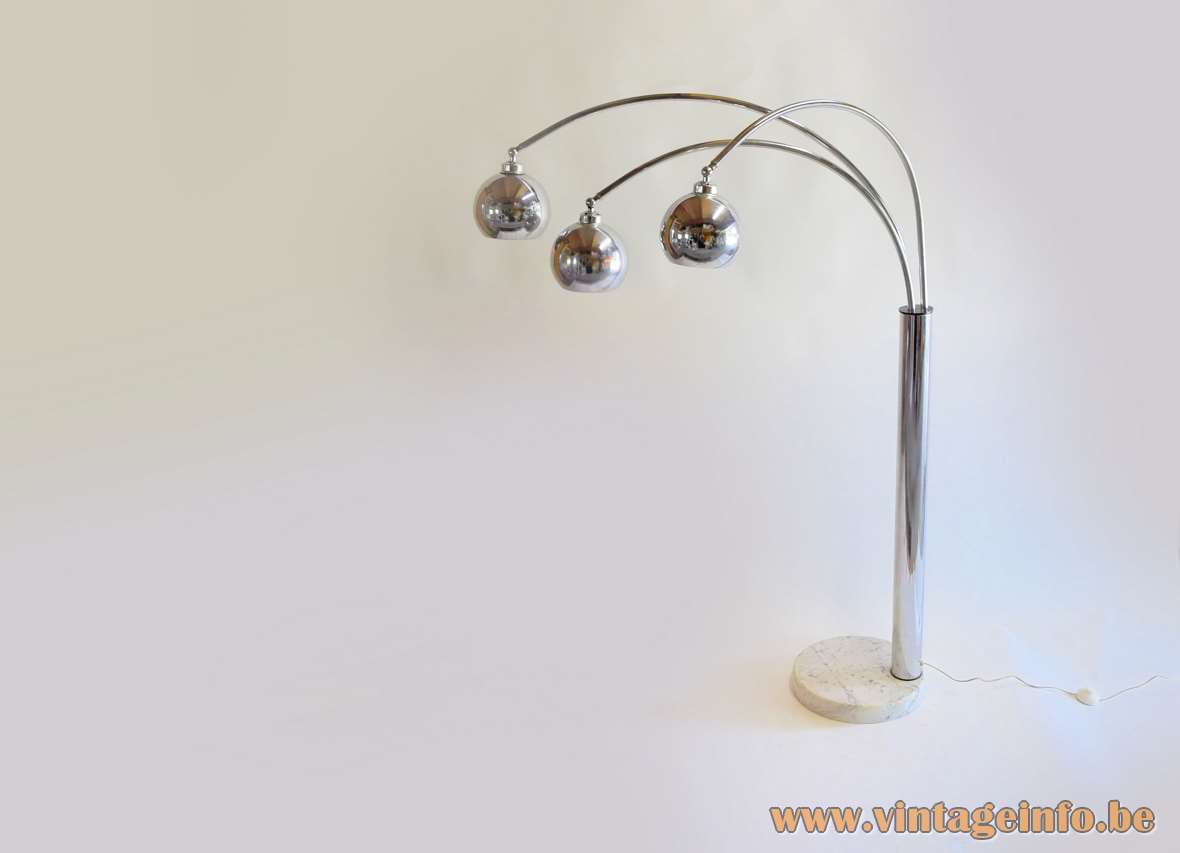 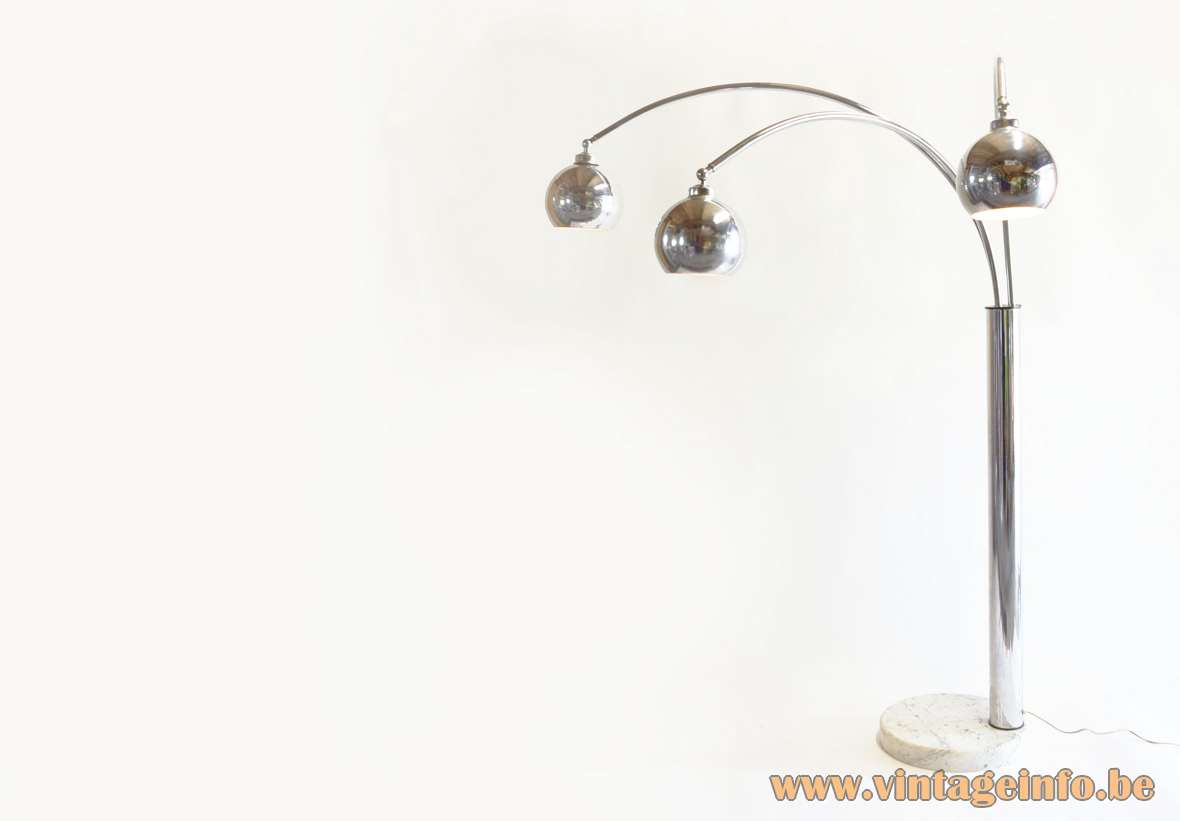 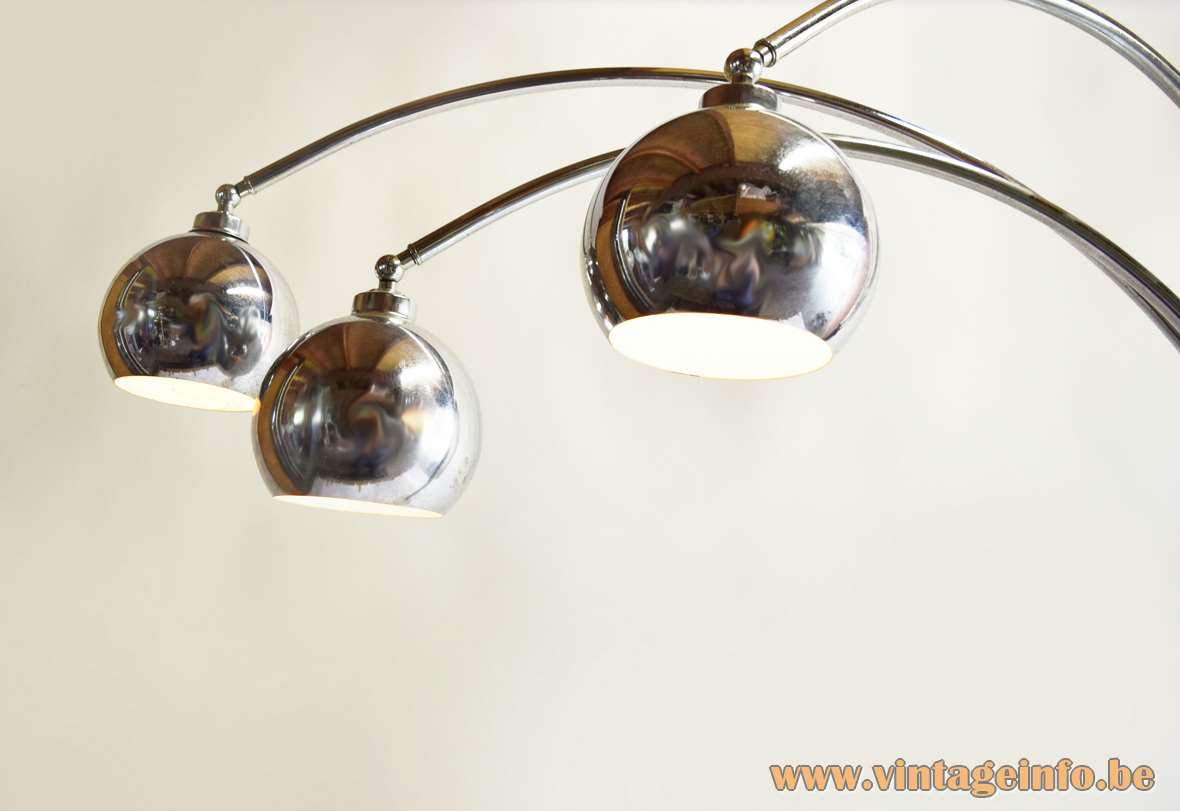 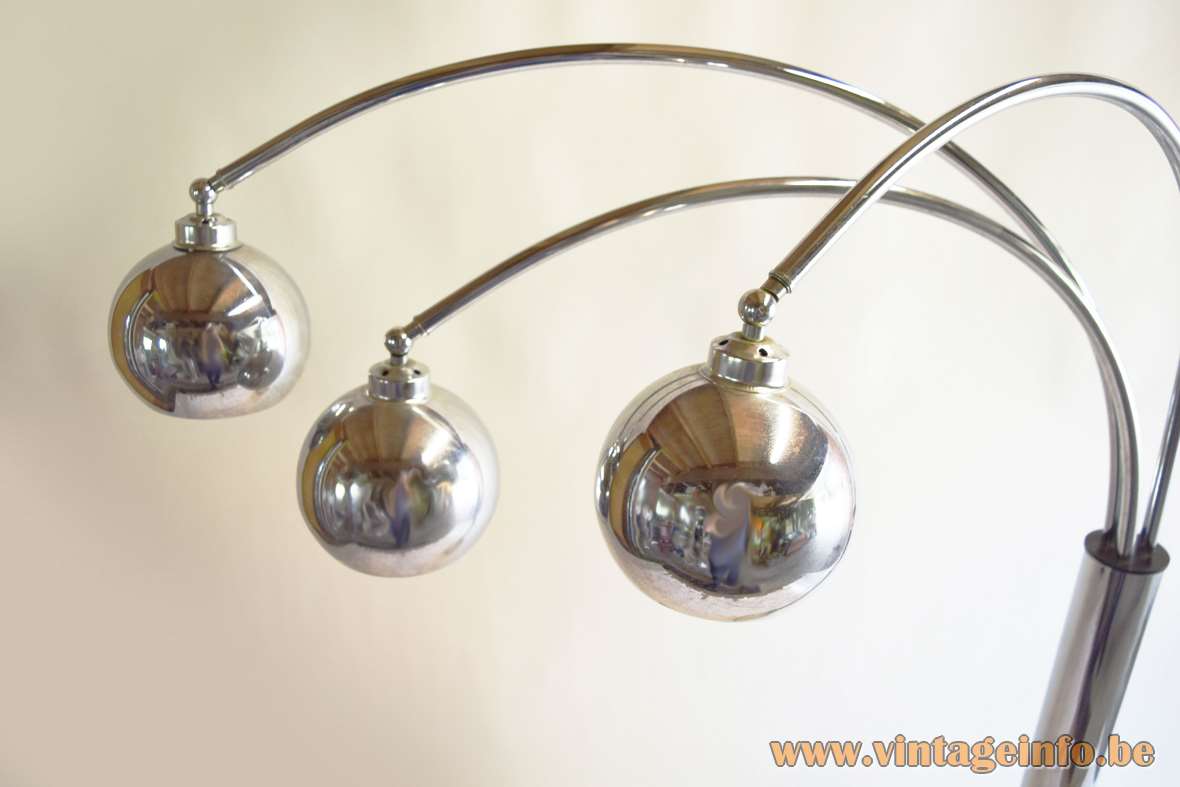 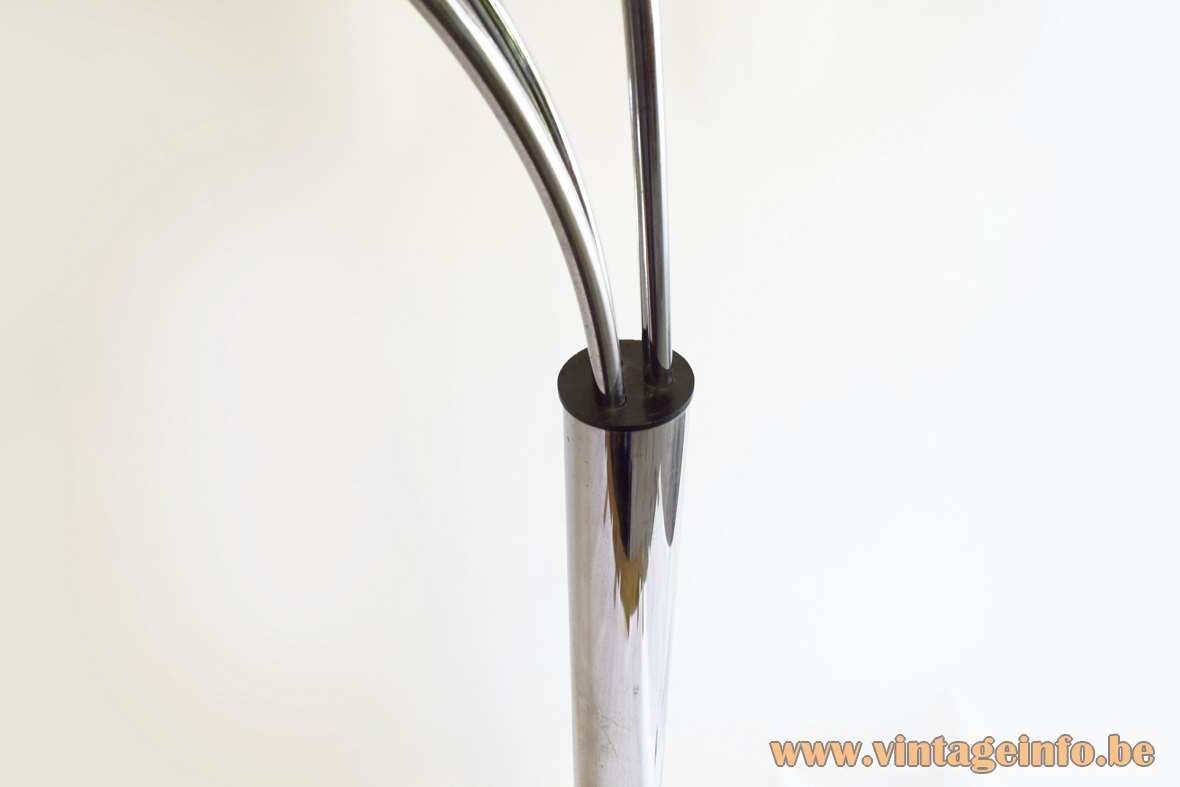 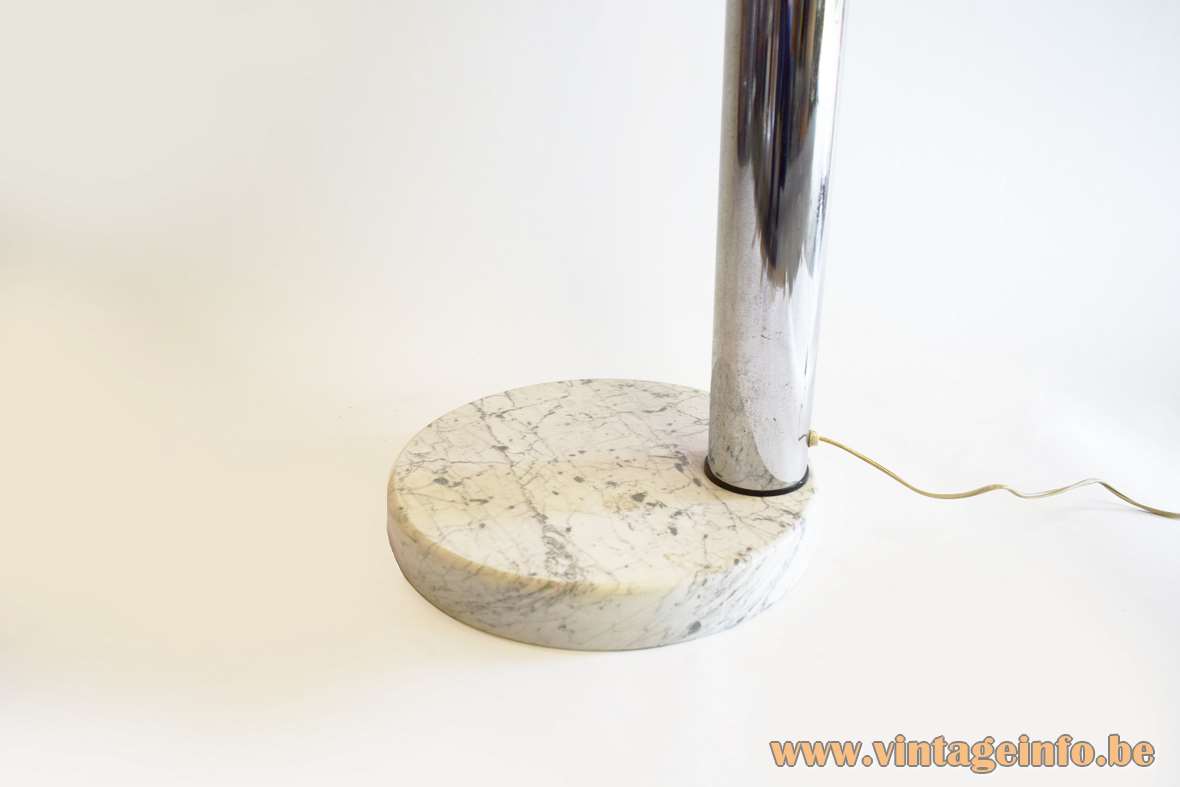 A Reggiani marble and chrome eyeball floor lamp was used as a prop in Rocketman, the 2019 biographical musical film based on the life of musician Elton John.

2 marble and chrome eyeball floor lamps, but with more and different lampshades, also made by Massive, were used as a prop in the 2006 – 2007 British science fiction and police series Life On Mars. Starring John Simm, Philip Glenister and Liz White. As you can see, the black plastic connector is skewed by the rods. The series is situated in 1973, long before these lamps were made. Today (2020) Chinese copies are for sale in several online shops white names such as “Five finger floor lamp”. 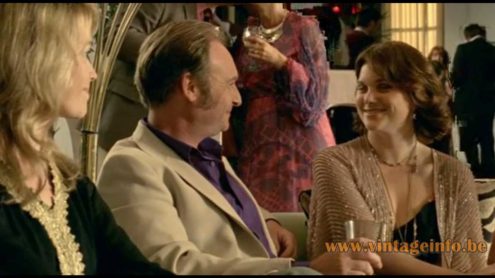 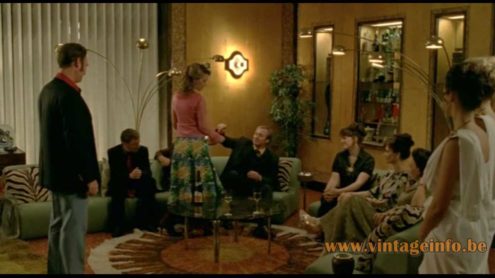 Other versions: This marble and chrome eyeball floor lamp was also made with a chromed base or a black marble base. Made with many different lampshades. Also produced in a completely white painted version. These floor lamps were made with 3 or 5 lamps. During the 1980s a version with halogen spots was made.

Similar floor lamps were produced by the Italian company Reggiani. Rumour has it that Reggiani produced these lamps for Massive, but that’s bullshit. There are many differences. The most striking dissimilarity is that the eyeball lampshades are different and have another connection to the rod, as you can see below. The black plastic center point were the swivable rods appear is made of metal at the Reggiani floor lamp: a much better quality. The plastic often gets loose, as you can see below in the TV series Life on Mars from 2007.

Goffredo Reggiani (1929 – 2004) founded the company in the Italian town of Monza in 1957 and designed most of the lamps himself. In the beginning Goffredo most often used plywood and sanitized opaque glass in his designs as you can see in this example, giving his lights a Scandinavian look. Later in the 1960s and 1970s his interest shifted towards brass and chromed metal. The Reggiani company still exists.

A Reggiani marble and chrome eyeball floor lamp was used as a prop in the 2018 film Bohemian Rhapsody. A biographical film about the British rock band Queen.