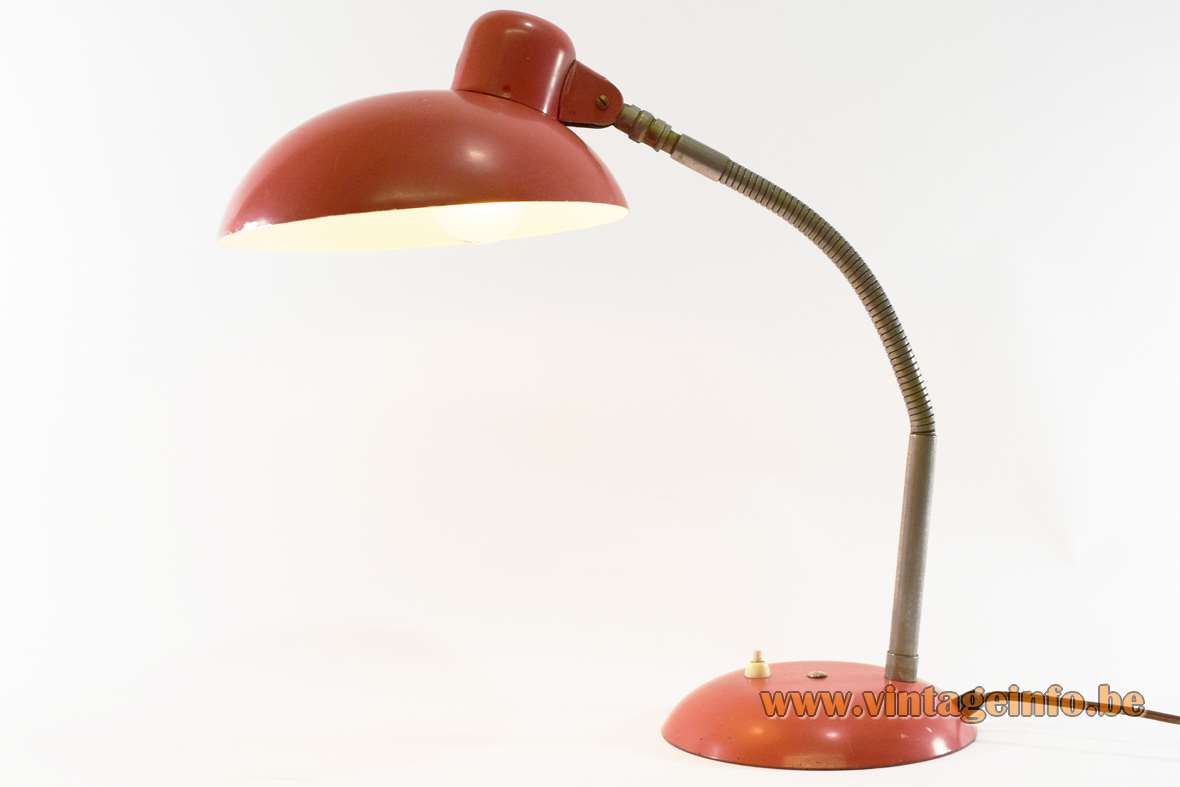 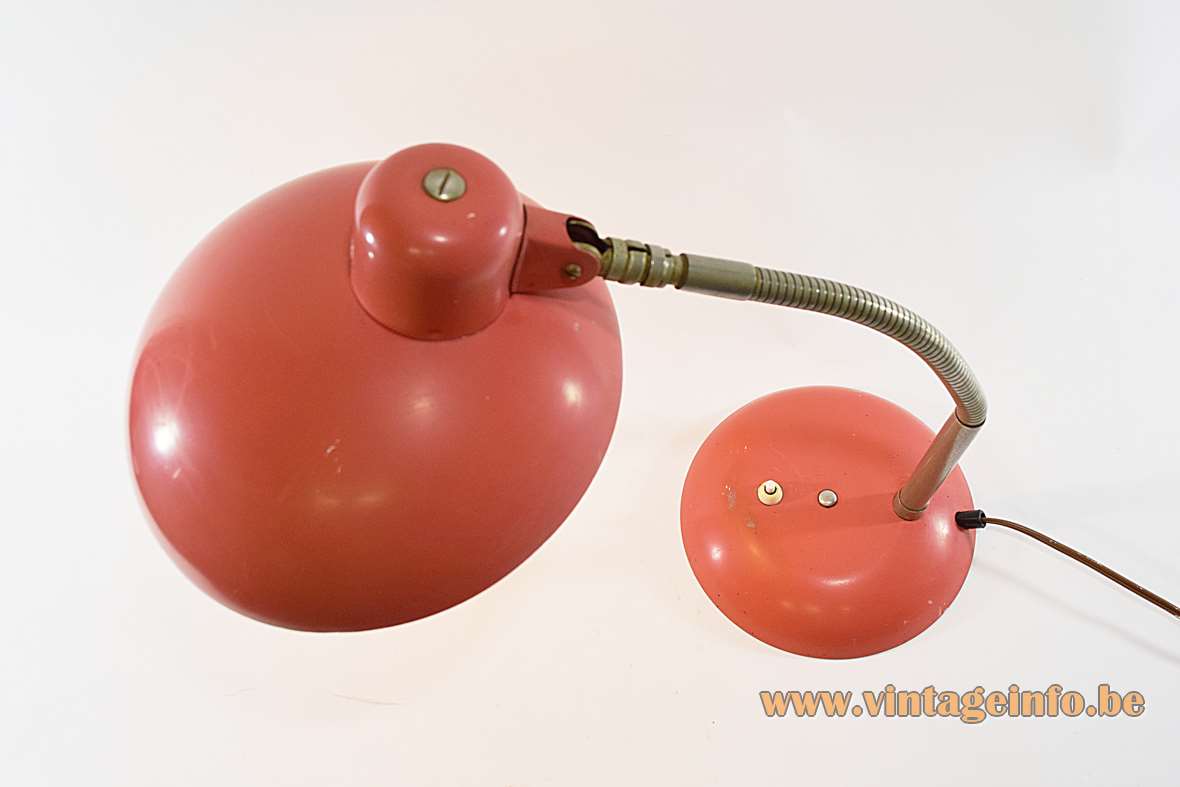 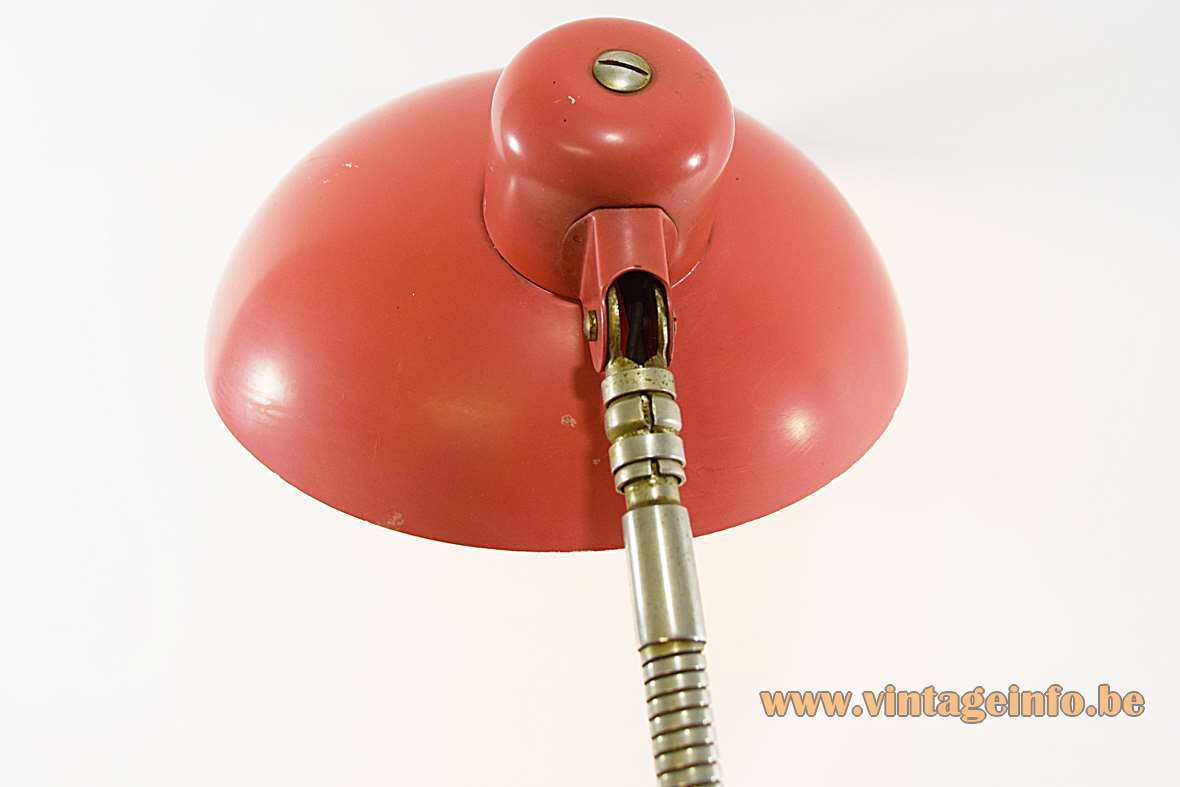 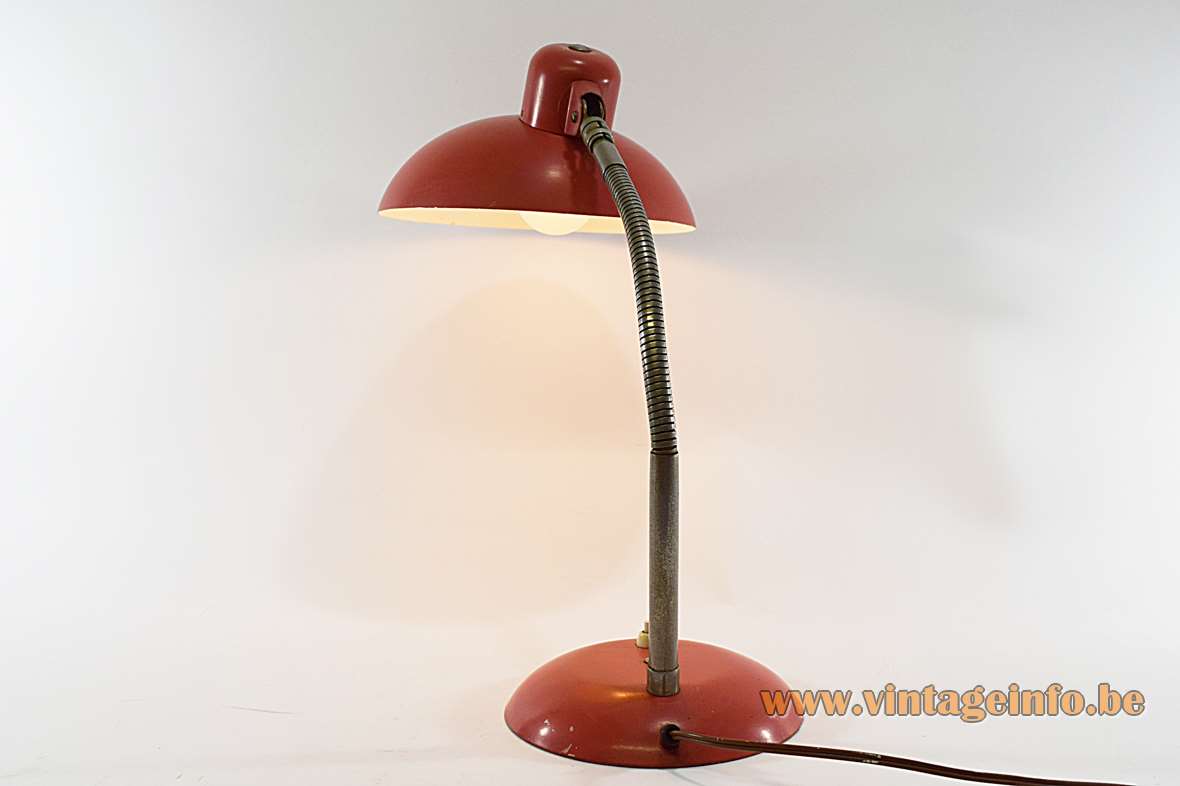 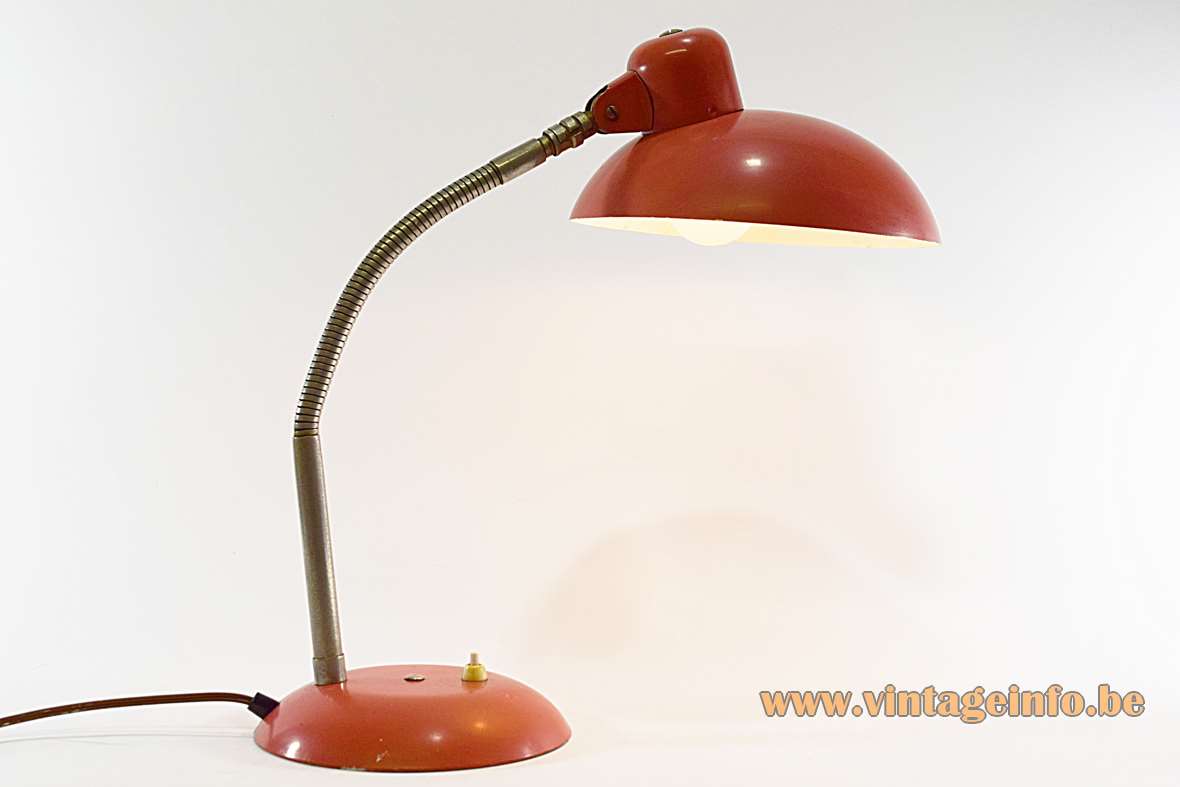 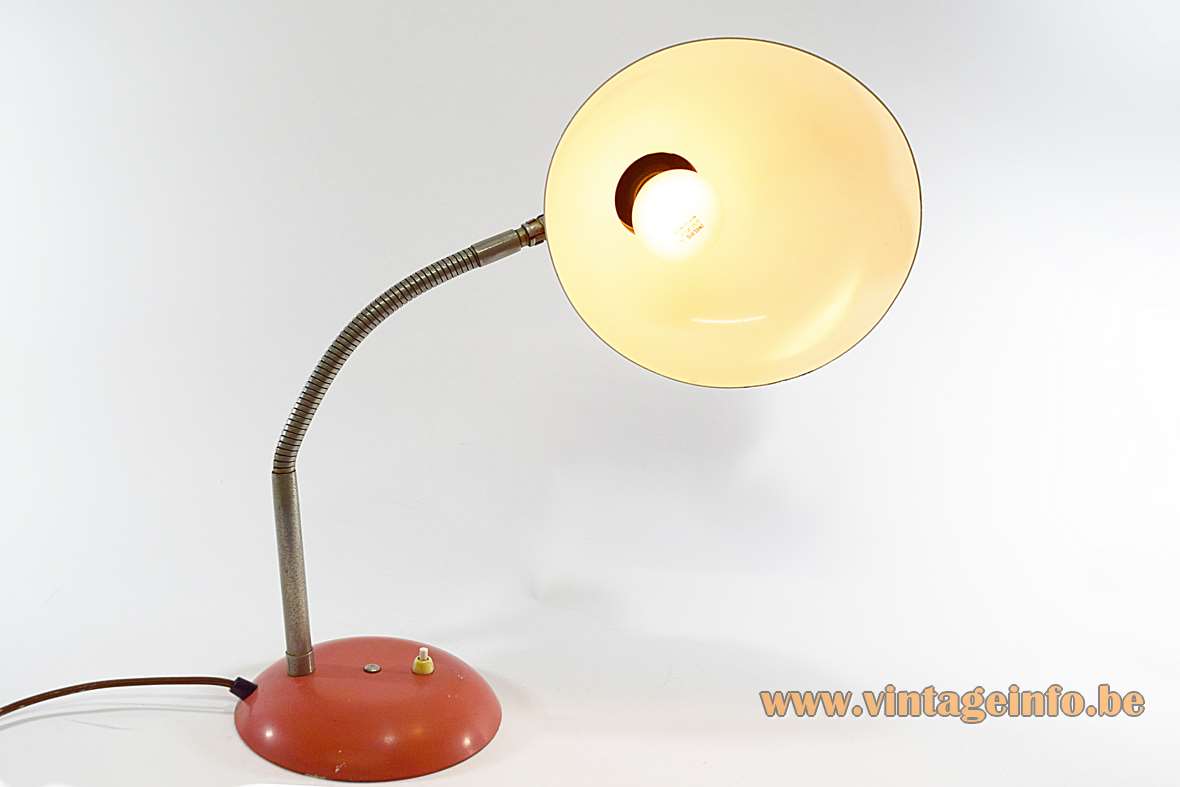 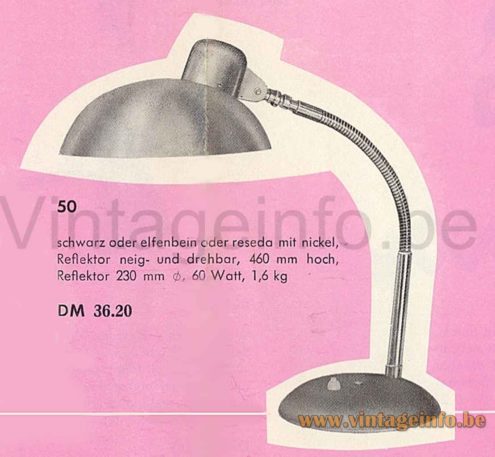 Materials: Pink-red or pale red rounded round metal base with a built-in switch. Cast-iron counterweight inside. Chrome rod and gooseneck. Pink-red painted round aluminium lampshade, white on the inside. Bakelite E27 socket.

Other versions: This lamp exists in several colours. It is model 50.

The SIS Bauhaus desk lamp is made in the style of the famous lamps designed by Christian Dell in the 1930s for Gebrüder Kaiser & Co.

SIS LICHT – Light Solutions was founded in 1924 by Erich Lang and his dad Karl Lang senior. They started a metal industry factory, that had it’s focus on lighting right from the start. The name SIS stands for Sirius Schweinfurt. Today, they are producing a wide range of industrial lighting. The company is led by Stefan Lang, the fourth generation to lead the family business.

Schweinfurt is a small town with a population of some 52.000 inhabitants (2016) in the northwest of Bavaria on the right bank of the Main River. Schweinfurt is known for its metal industry. Schweinfurt is one of the fastest growing cities in Germany and one of the most dynamic cities in Europe in terms of development opportunities.

A grey SIS Bauhaus desk lamp was used as a prop in the 1975 French crime film Peur Sur La Ville (Fear Over the City or Night Caller). Starring Jean-Paul Belmondo, Charles Denner and Giovanni Cianfriglia. Many other lamps appear in this movie. 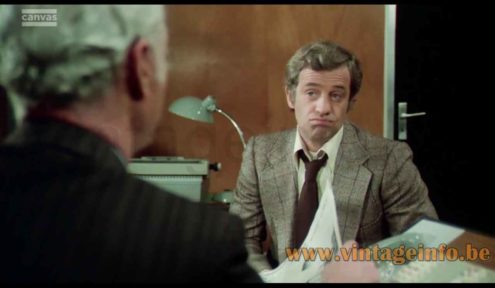 A grey SIS Bauhaus desk lamp, a slightly different model, was used as a prop in the 2018 French psychological thriller TV series Les Rivières Pourpres (The Crimson Rivers). Starring Olivier Marchal and Erika Sainte. In the early 2000s 2 films were made with the same name and characters. The lead role was then played by Jean Reno. This is a follow-up series. 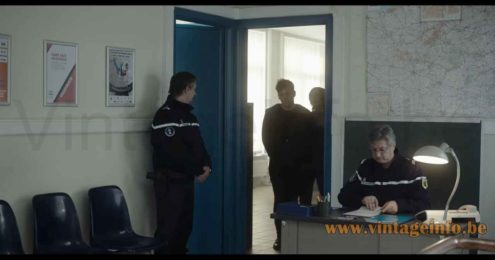 The city of Schweinfurt – Wikipedia

Many thanks to Claes for the catalogue picture and the help.