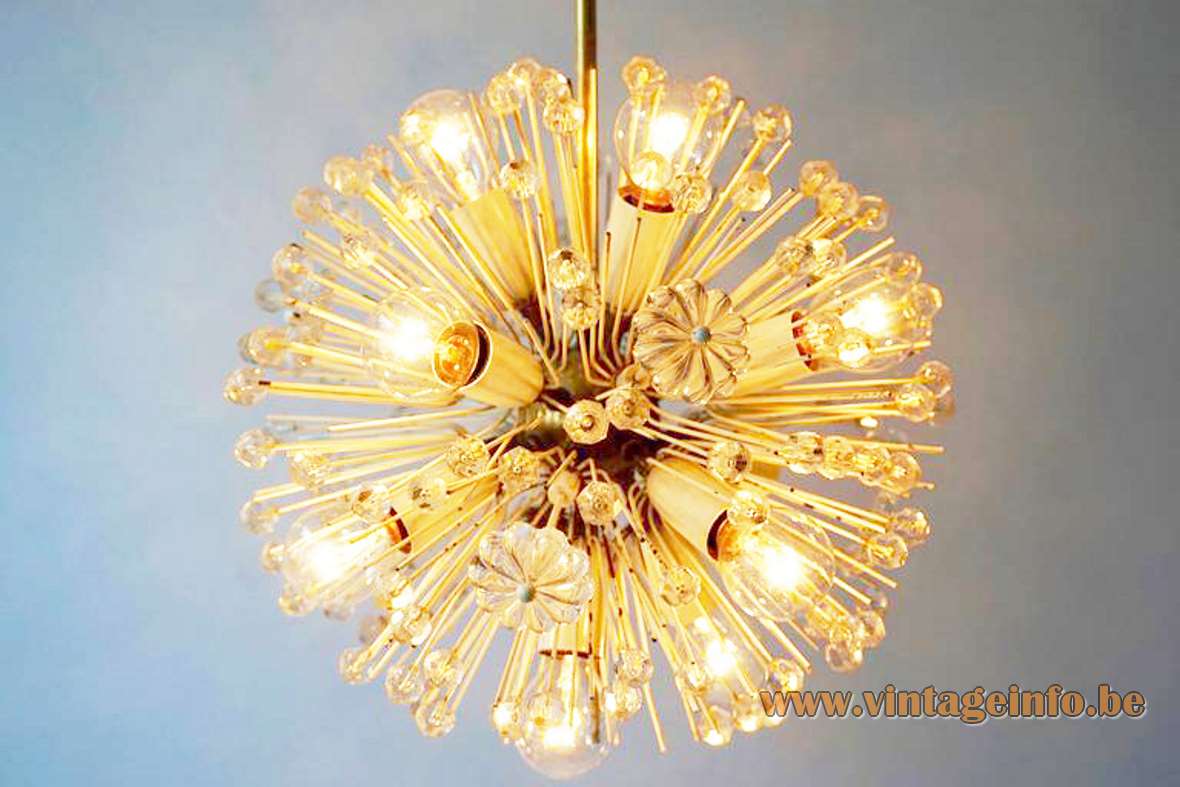 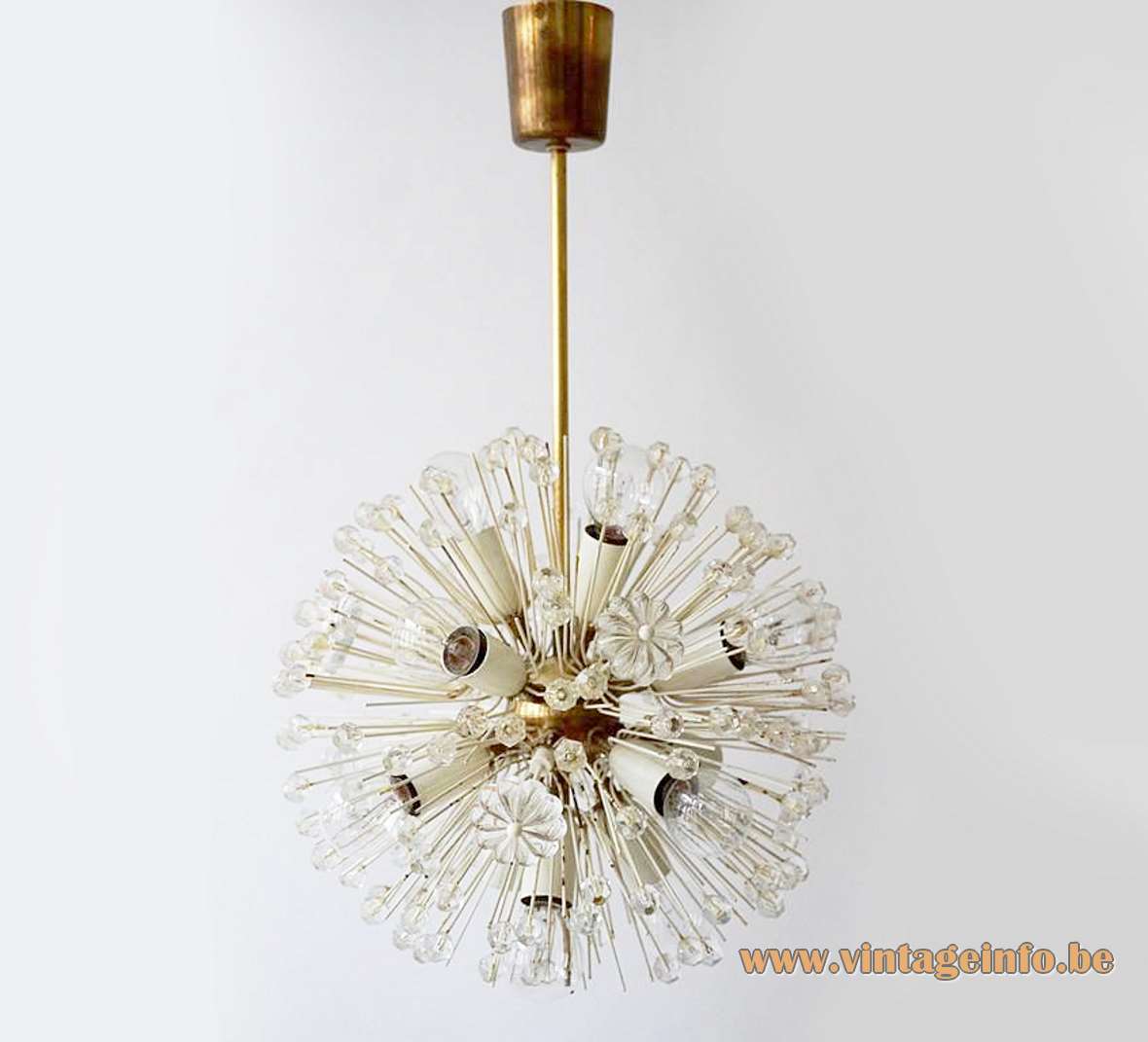 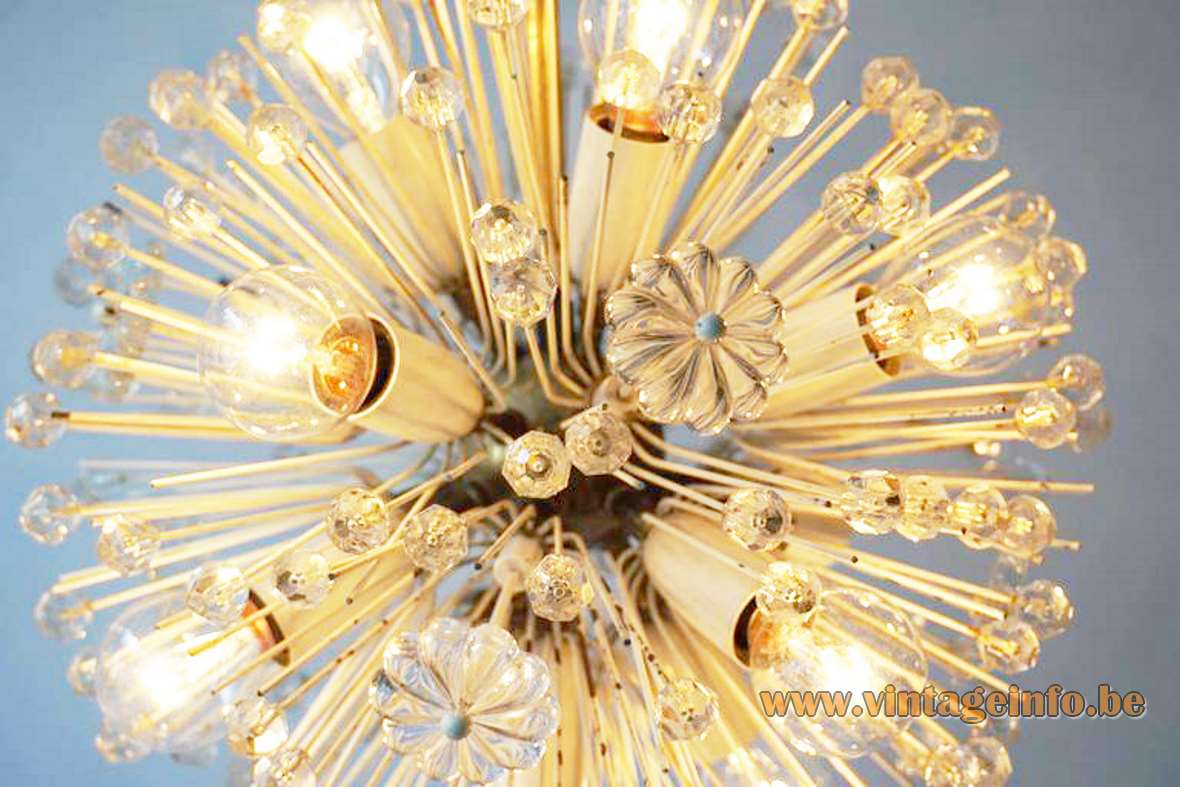 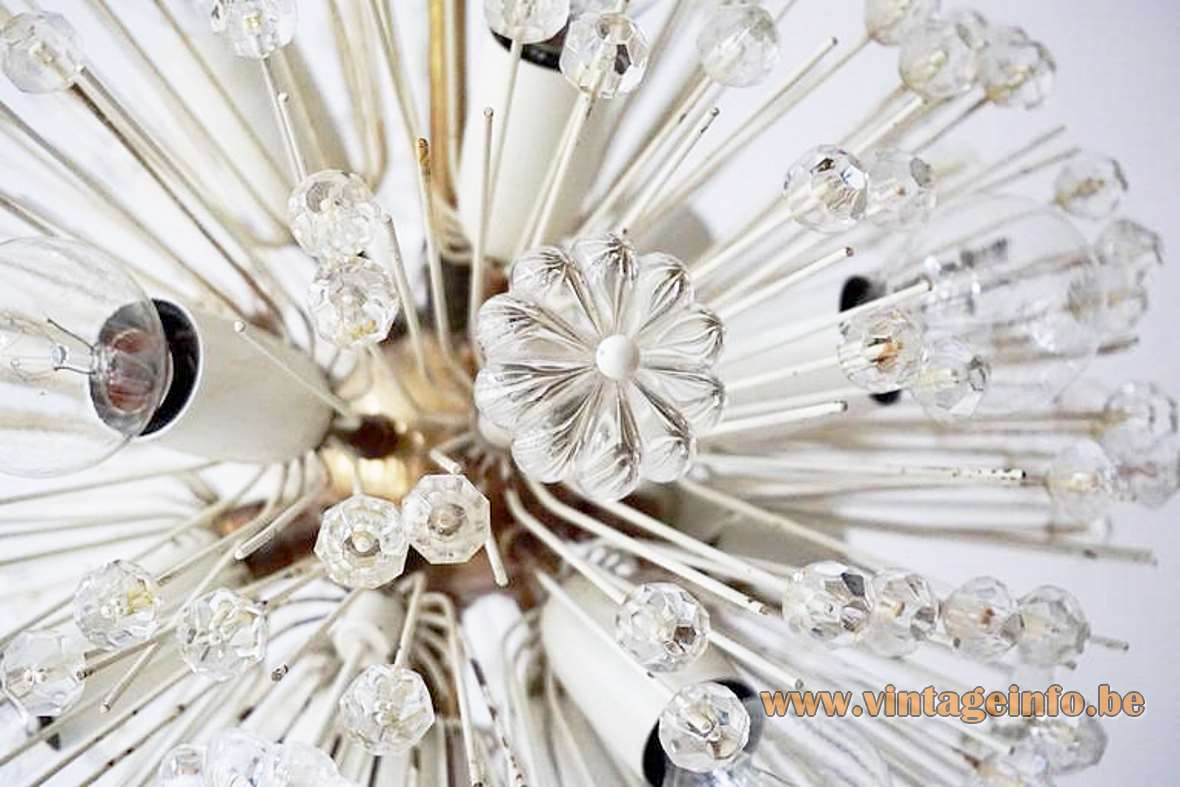 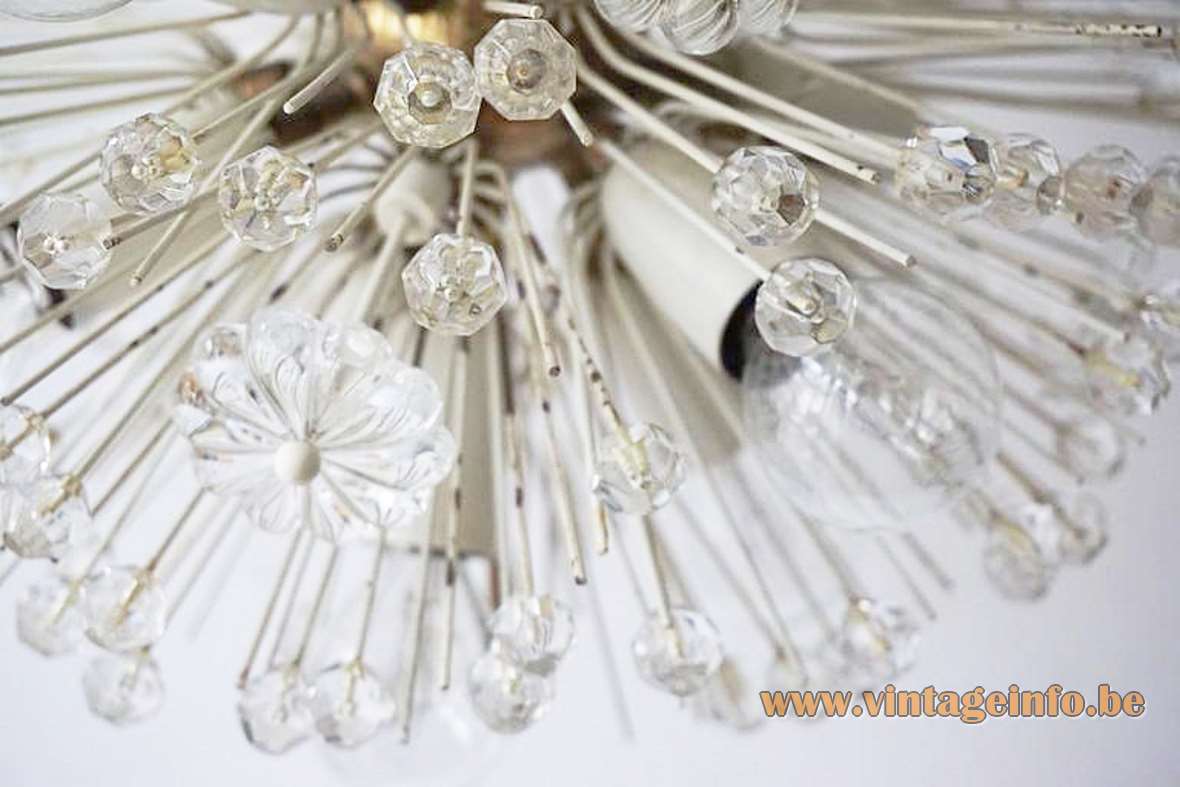 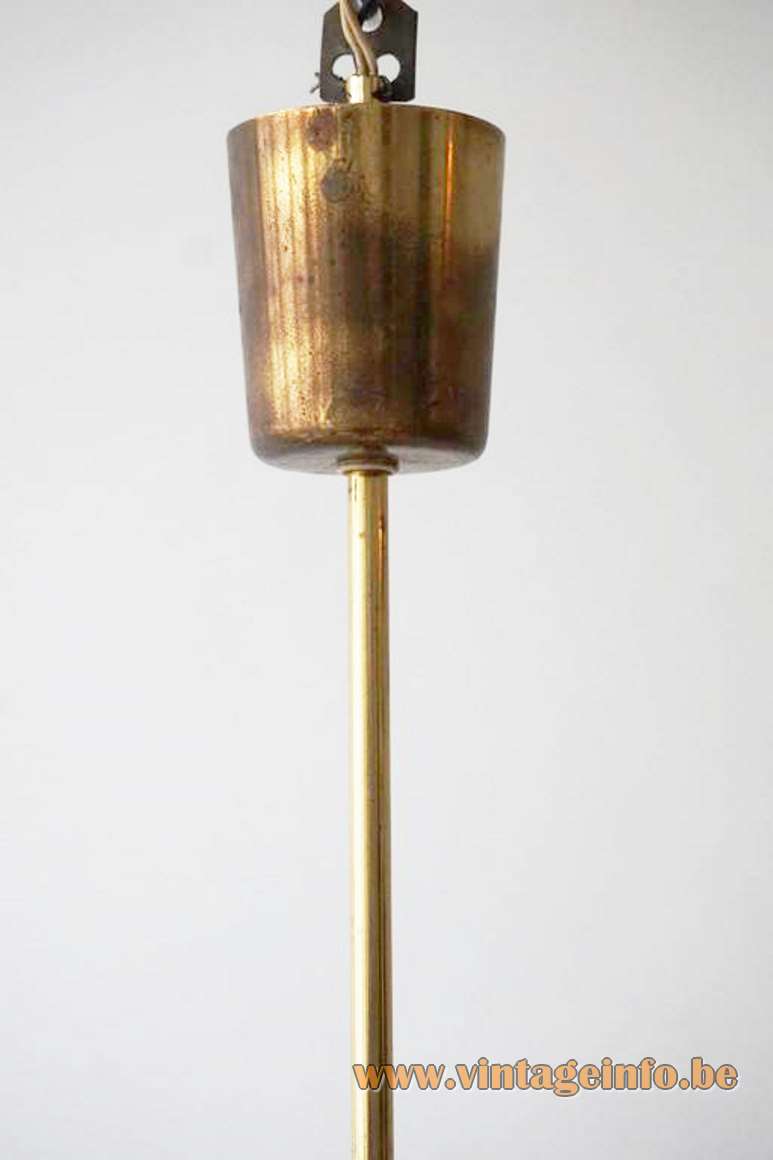 Designer: Rupert Nikoll in the 1950s.

Other versions: This Rupert Nikoll sputnik flowers chandelier was made in several variations and sizes. Also made in chromed metal and as a flush mount. Also wall lamps exists.

It is always said that Emil Stejnar designed these lamps. But in the 1962 German book: Lampen Und Leuchten, Ein Internationaler Formenquerschnitt (Lamps and lights, an international cross-section of shapes), page 183, written by Gerhard Krohn is printed: Rossettenleuchter: Type und Design: Nikoll. Gerhard Krohn has written several books at that time about lighting. Among others his famous book Formschöne Lampen und Beleuchtungsanlagen (Elegant lamps and lighting equipment). All published by Callwey from München.

Today (2021) Wikipedia says the opposite. I tend to think the book is correct.

In the USA these lamps were sold by the A.W. Pistol, Inc company from Stamford, Connecticut. They appear (at least) in the 1964 catalogue.

Emil Stejnar (born 1931) is the most famous designer that worked for Rupert Nikoll. He is also from Austria. According to Wikipedia he designed numerous chandeliers, wall lamps, flush mounts and mirrors. All designed in the beginning of the 50s. They were all decorated with crystal glass flowers. In 1957, goldsmith and silversmith Stejnar moved to Sweden. He married and returned to Austria in 1968. His designs were produced for decades.

Peill + Putzler UFO Pendant Lamp
Nordisk Solar Glass Globe Pendant Lamp
AV Mazzega Amber Glass Flower Pendant Lamp
Peill + Putzler White Clouds Pendant Lamp
Vintageinfo uses cookies to improve the functioning of this website. First party cookies (cookies for our statistics) and the “Last Viewed” cookie is obvious. The other cookies are from Google. Nothing to be worried about, but we have to mention it. You can opt-out or block the cookies, no problem, the website will be available, only the “Last viewed” items won’t be visible.Accept Read More
Privacy & Cookies Policy