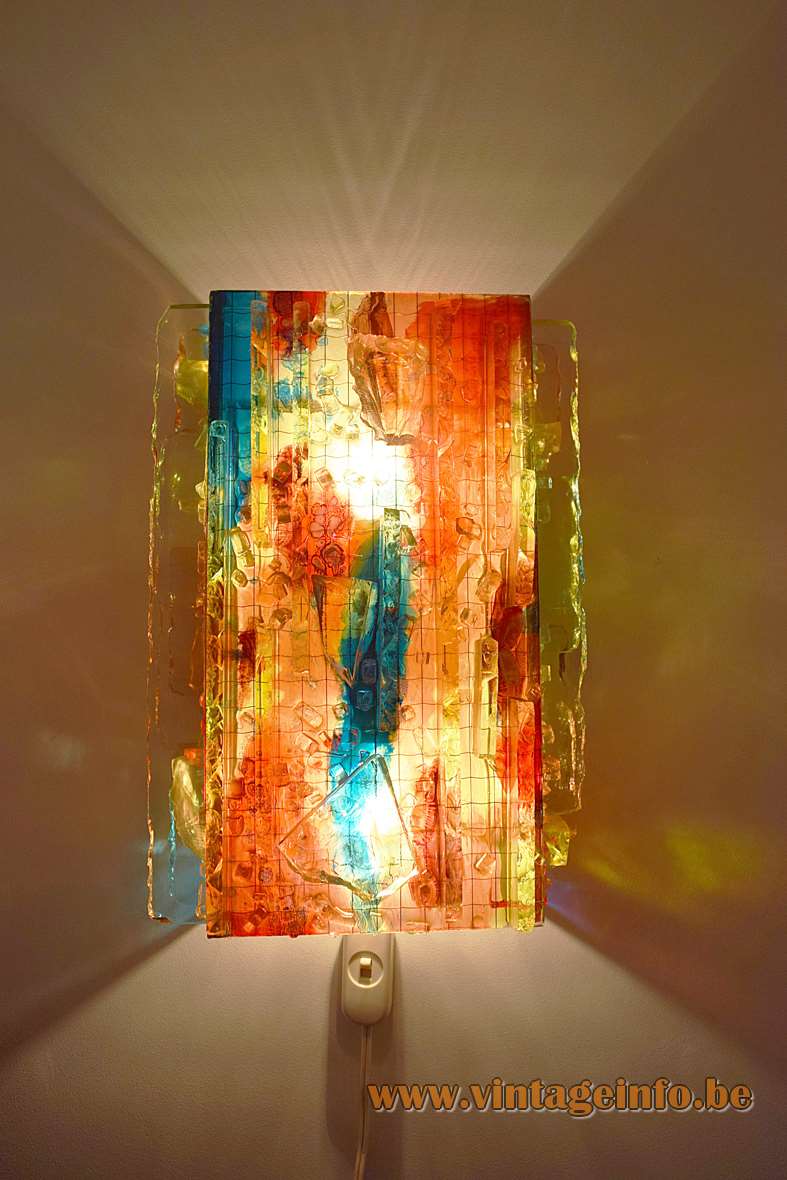 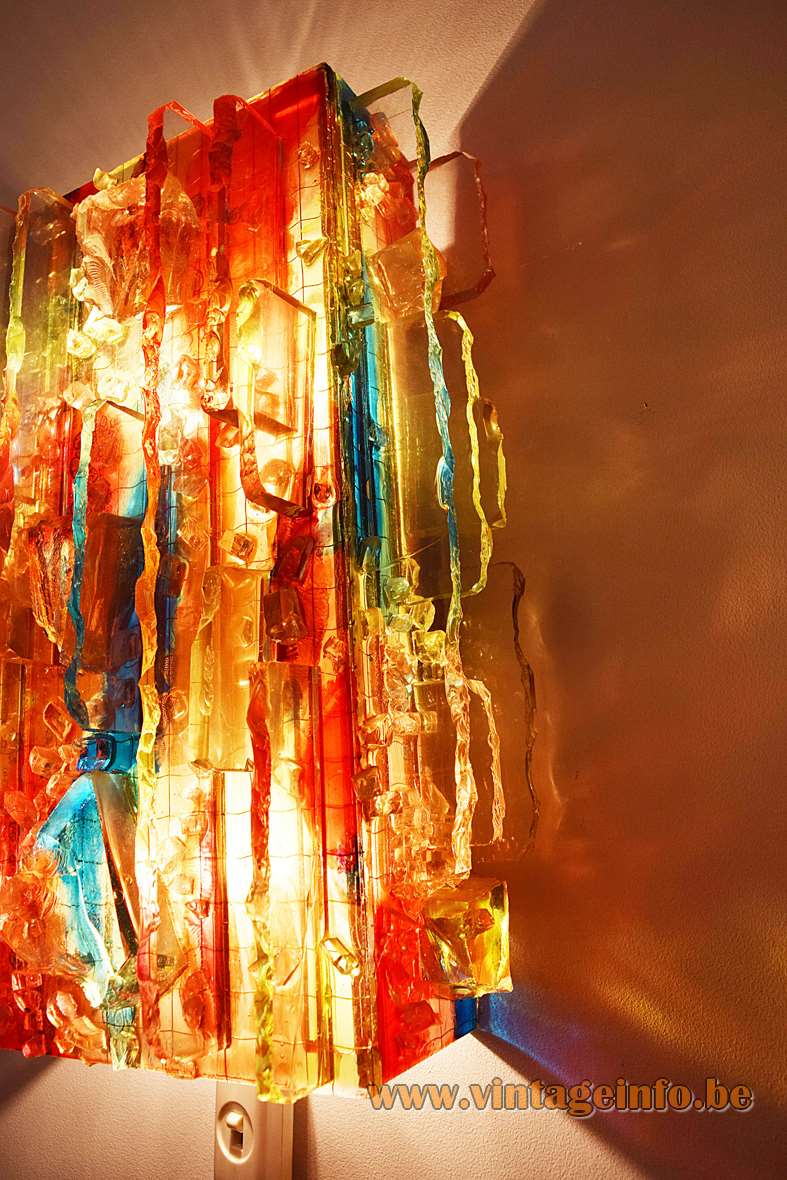 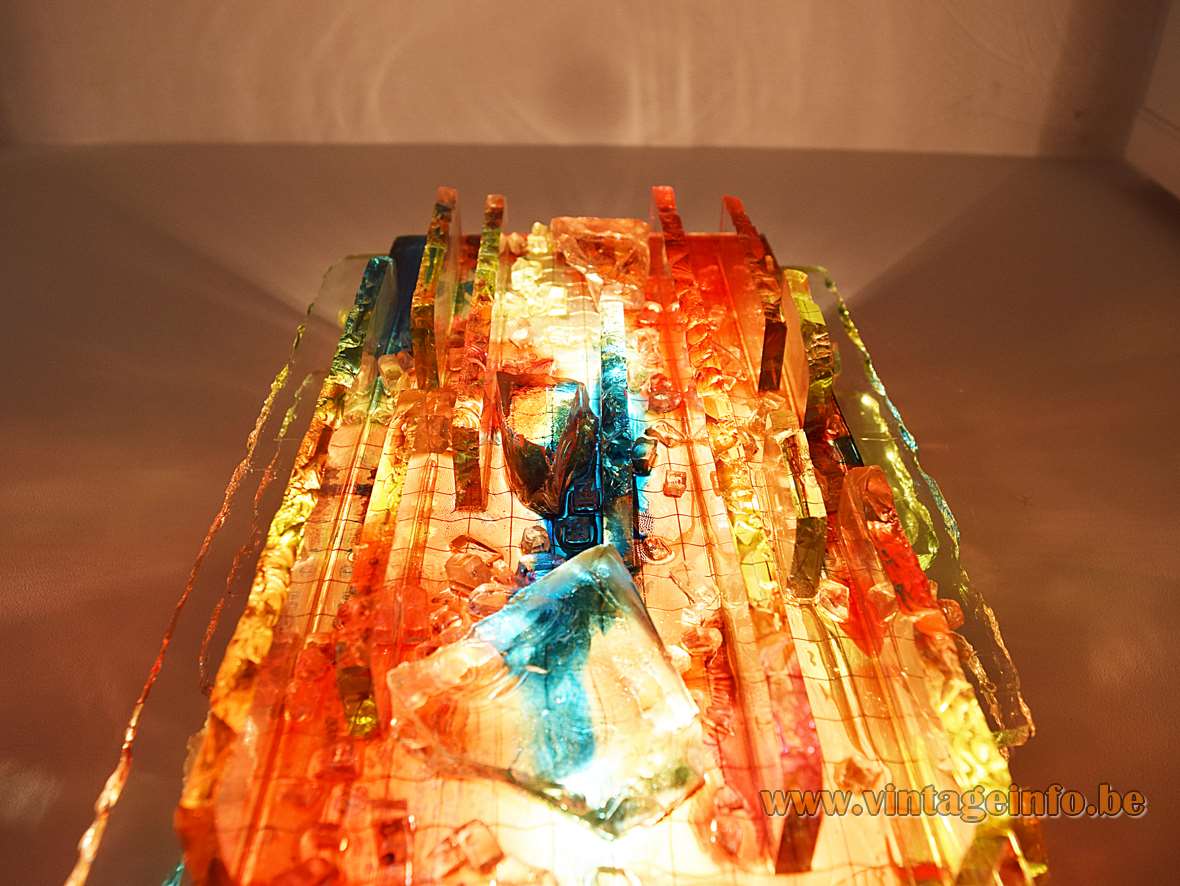 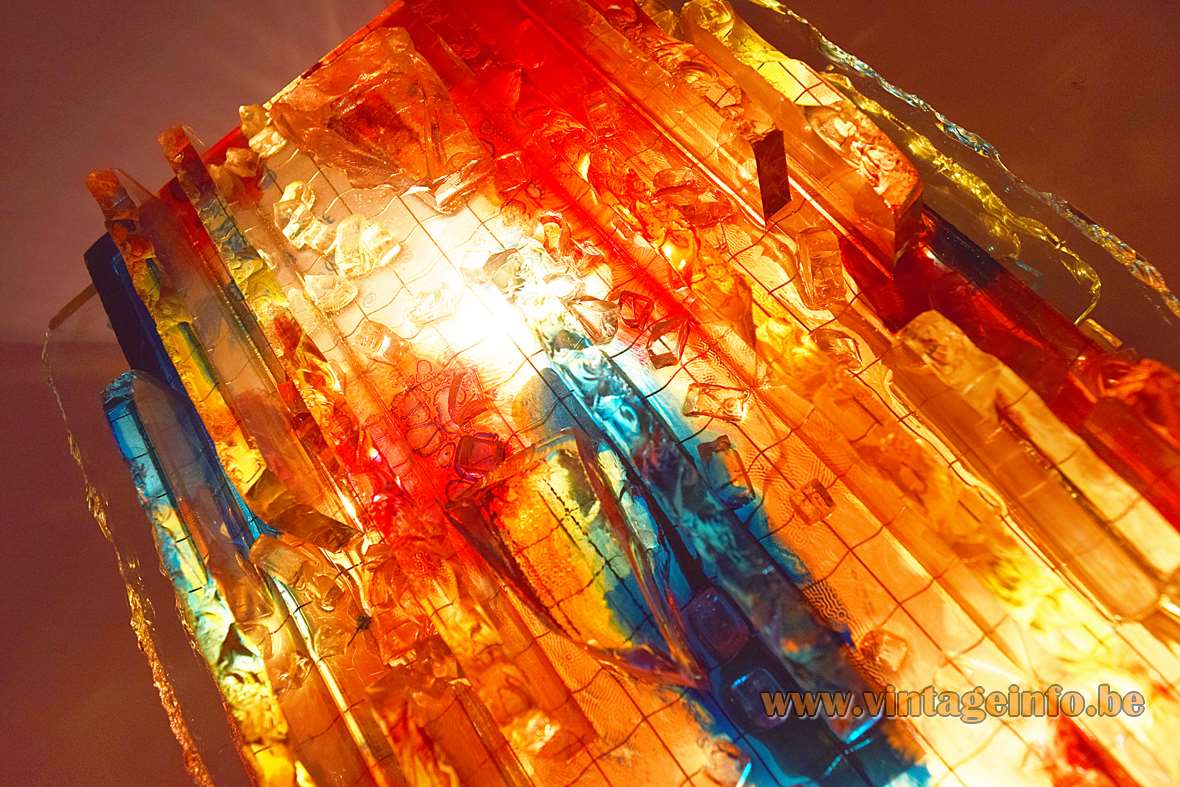 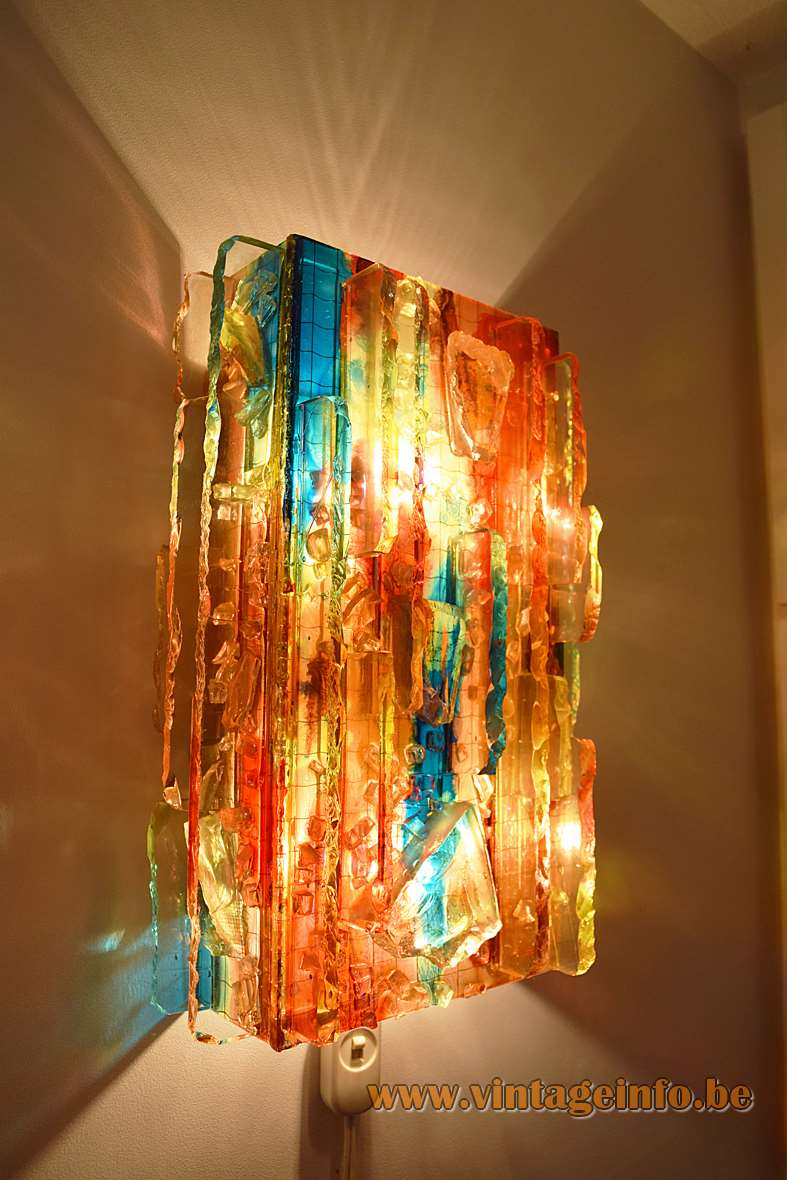 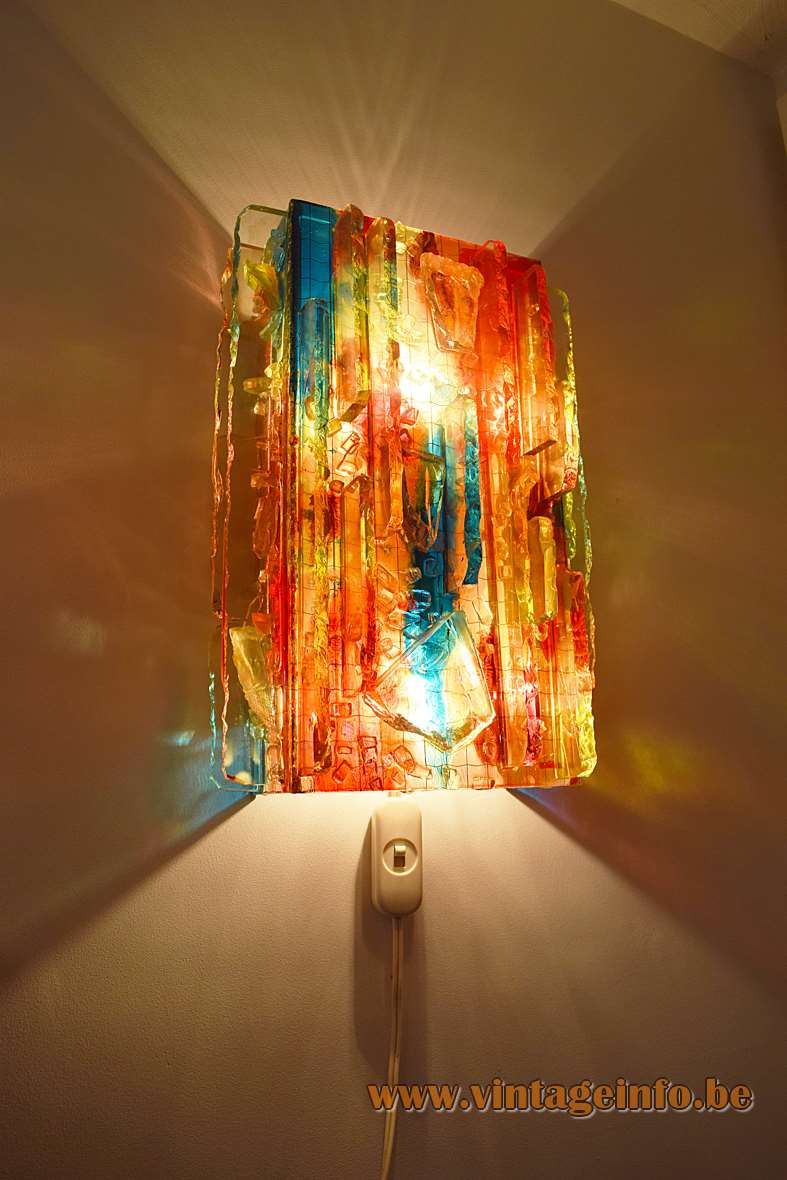 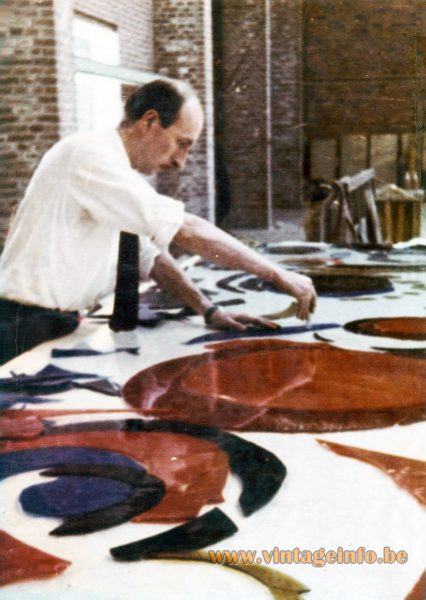 Original Dutch text in the catalogues

Melt paintings
Chartres: as church windows stained, so are these glass sculptures melt painted. On a base of reinforced glass is a composite colour glass melted. No two sculptures are the same, but they are all vital like a painting from the Cobra art school …

Green version of this lamp

The Raak Chartres Wall Lamp was used as a prop in the French film Le Corps De Mon Ennemi (Body of my enemy) from 1976 with Jean-Paul Belmondo. Many Raak lamps together with Stilnovo and Harvey Guzzini lamps appear in this movie. 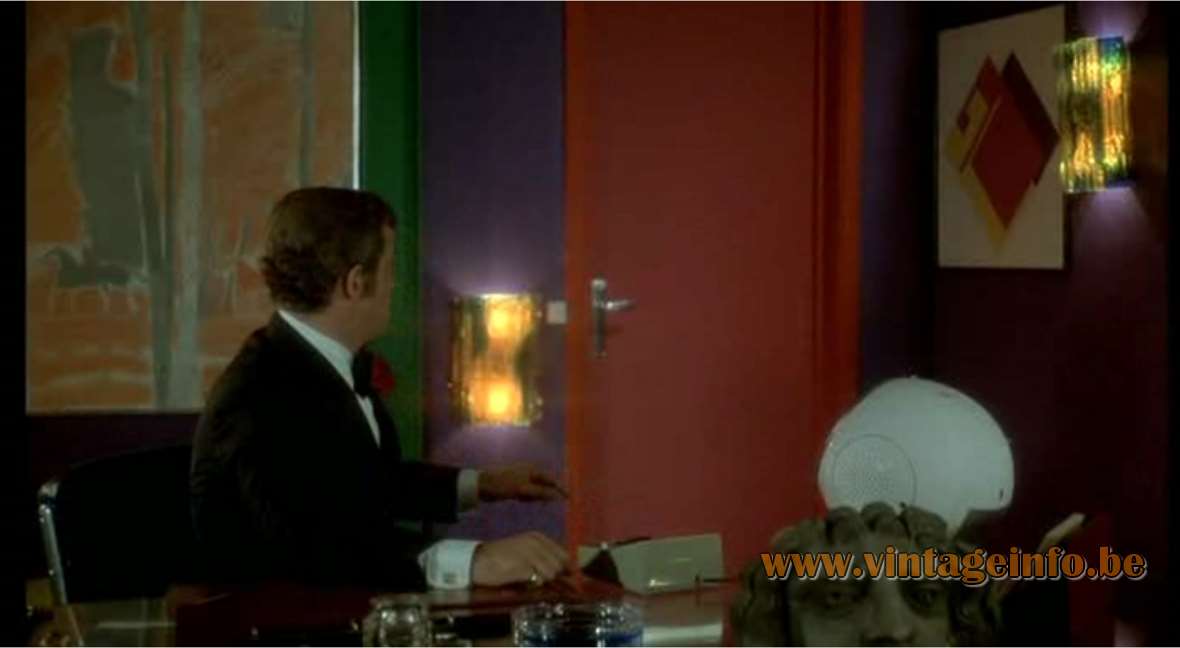 Other versions: This Raak Chartres red glass wall lamp exists in a few sizes and also made in green with 2 E27 bulbs. The lights could also be custom made.

The style of these type of lamps is often named Brutalist. Not to be confused with the Brutalist architecture, or Brutalism from more or less the same period. That is something completely different.

Willem van Oyen Senior had a small factory that produced these lamps for Raak Amsterdam, known as “BEVO glasindustrie“. They are all handmade and therefore slightly different. The Bevo company still exist today and is now owned by his son, Willem van Oyen Junior.

These large brutalist wall lamps were inspired by the stained glass windows of the famous Chartres Cathedral in France, also known as the Cathedral of Our Lady of Chartres, about 80 kilometres (50 mi) south-west of Paris.

The handmade glass art of these wall lamps is the work of glass artist Willem van Oyen Sr. There are several references on the internet attributing them to A. Lankhorst. Lankhorst was an architect who used these wall lamps to decorate restaurant “Dijkstra” in Zwolle, The Netherlands, mentioned in the Raak Catalogue 7 from 1970 as you can see on the picture below.

The Dutch company Raak was founded in 1954 by Carel O. Lockhorn (18 June 1923 – 6 October 2004), a previous employee of Philips lighting from Eindhoven. Raak, which means “to hit” in Dutch, implies design which precisely “hits the nail on the head”. 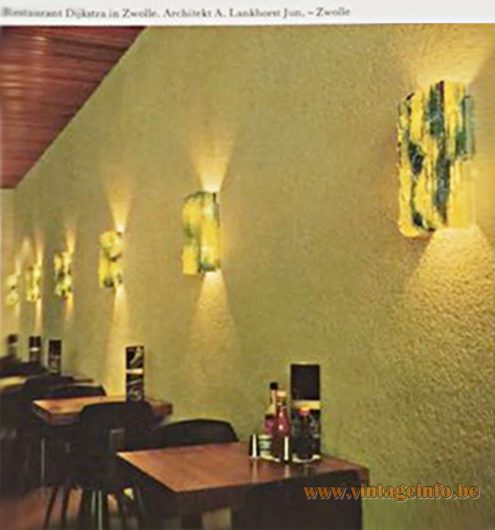 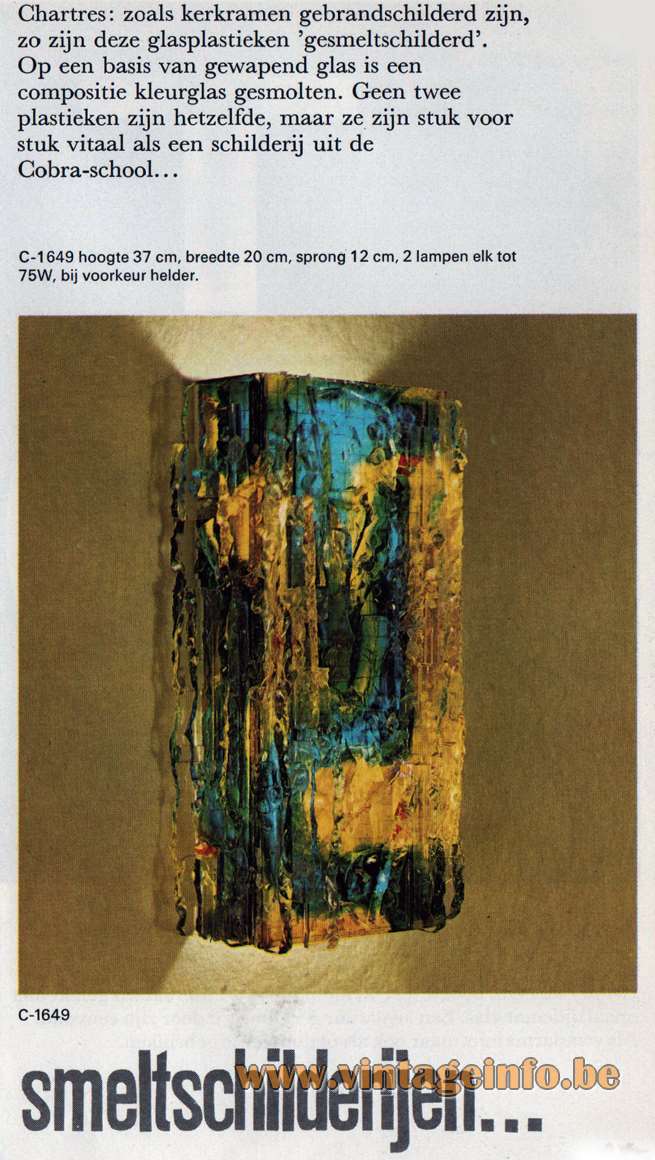