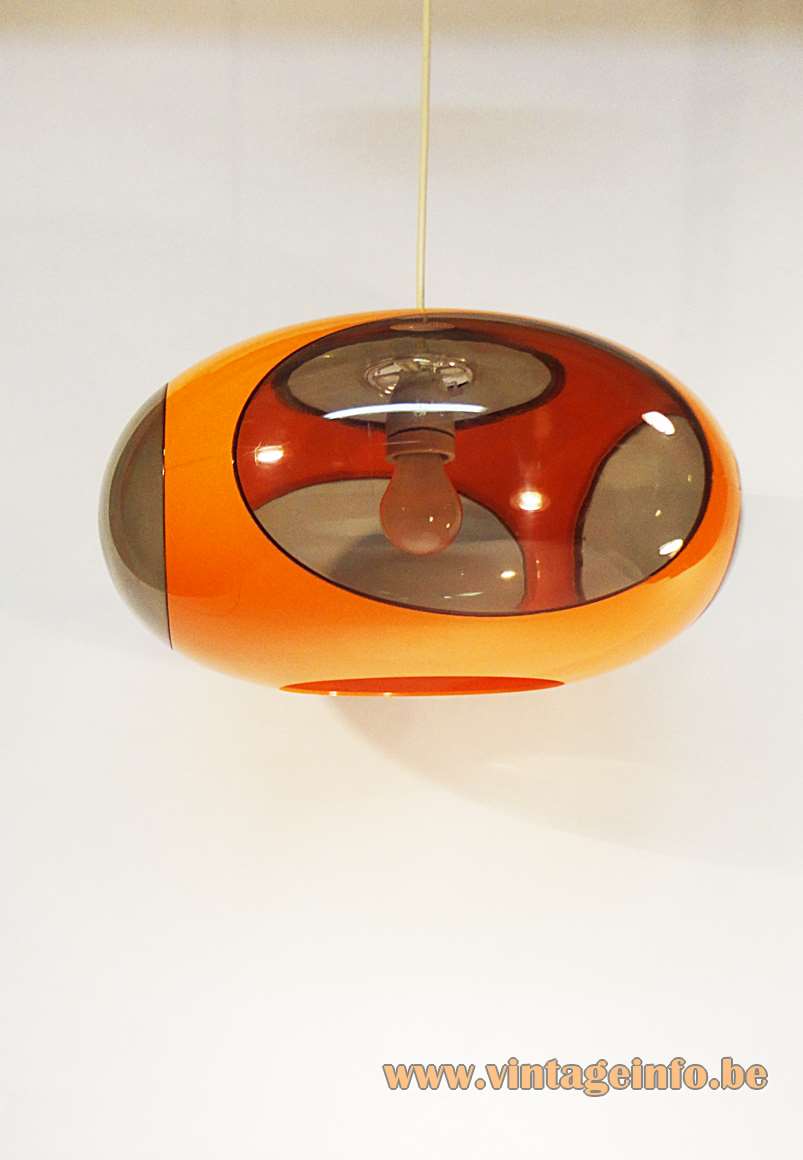 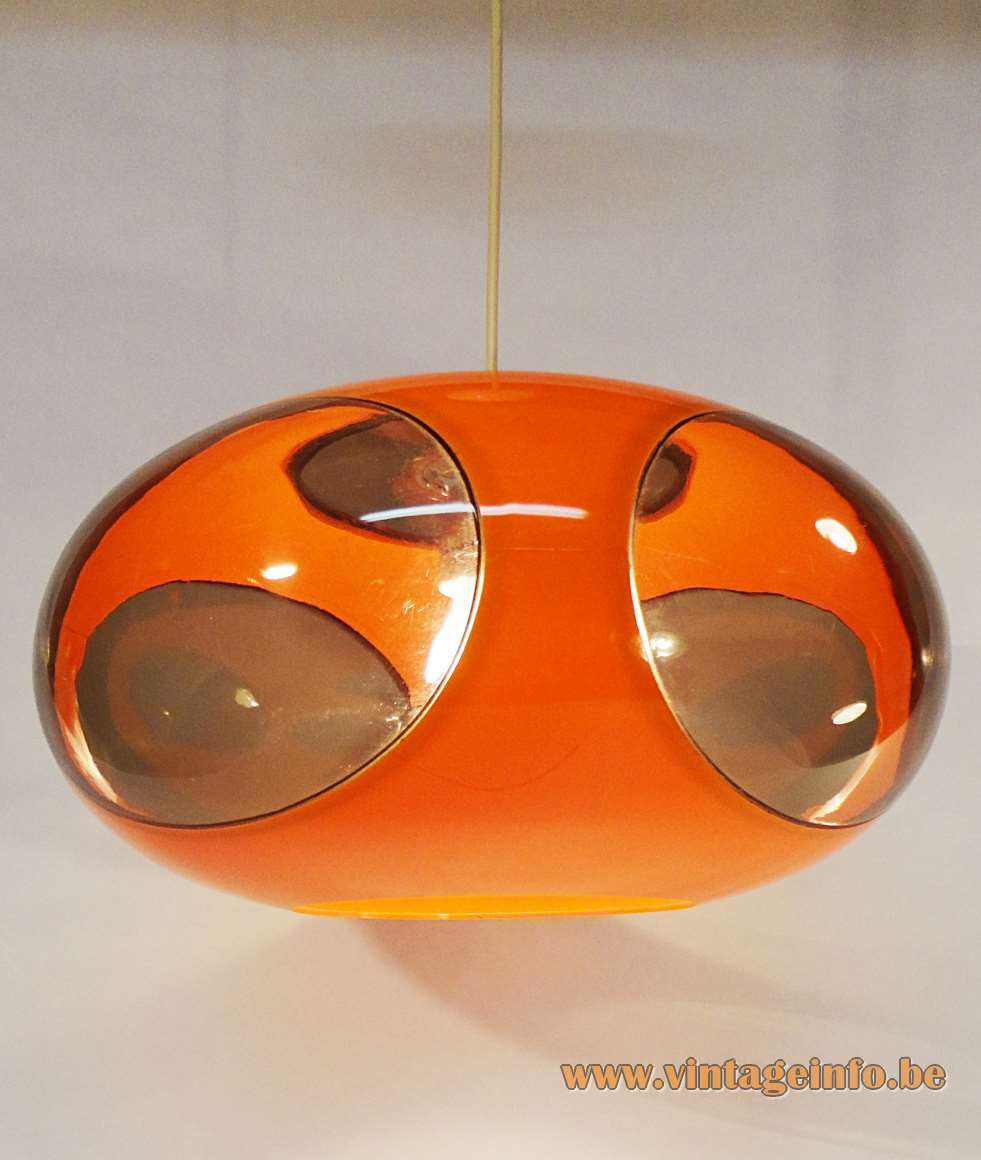 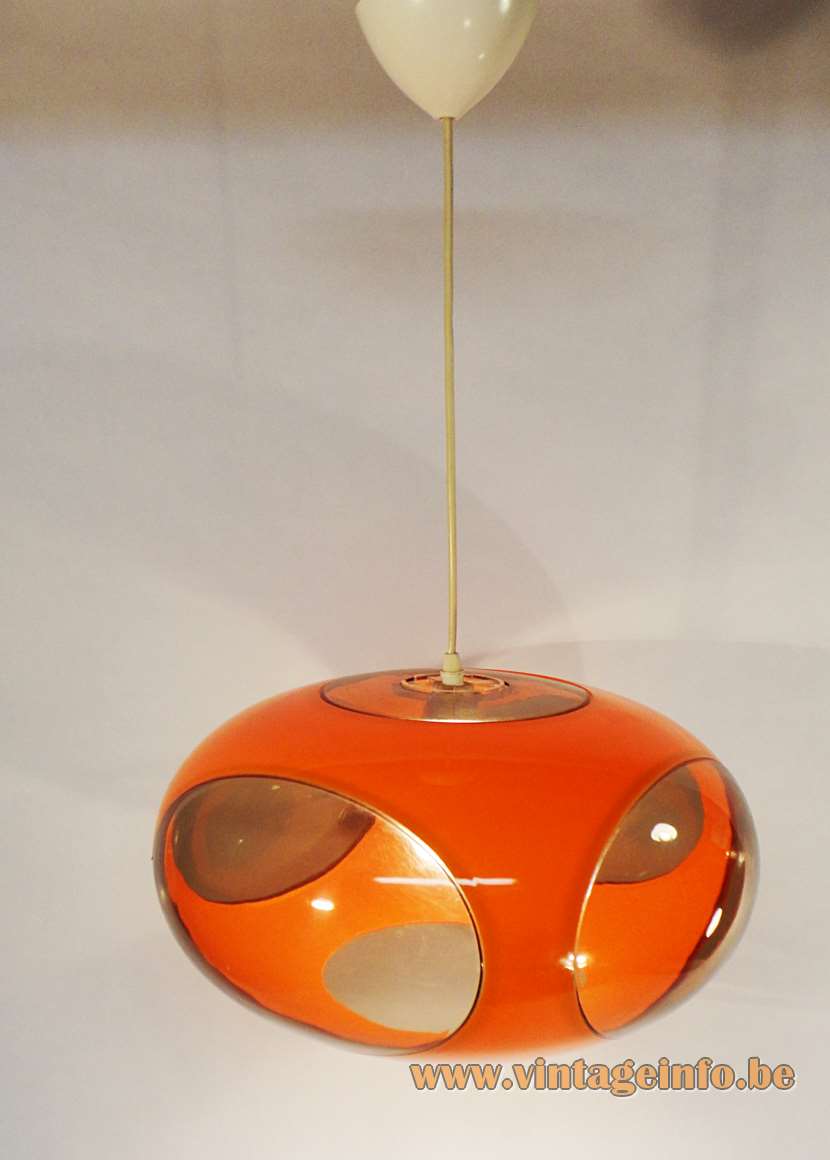 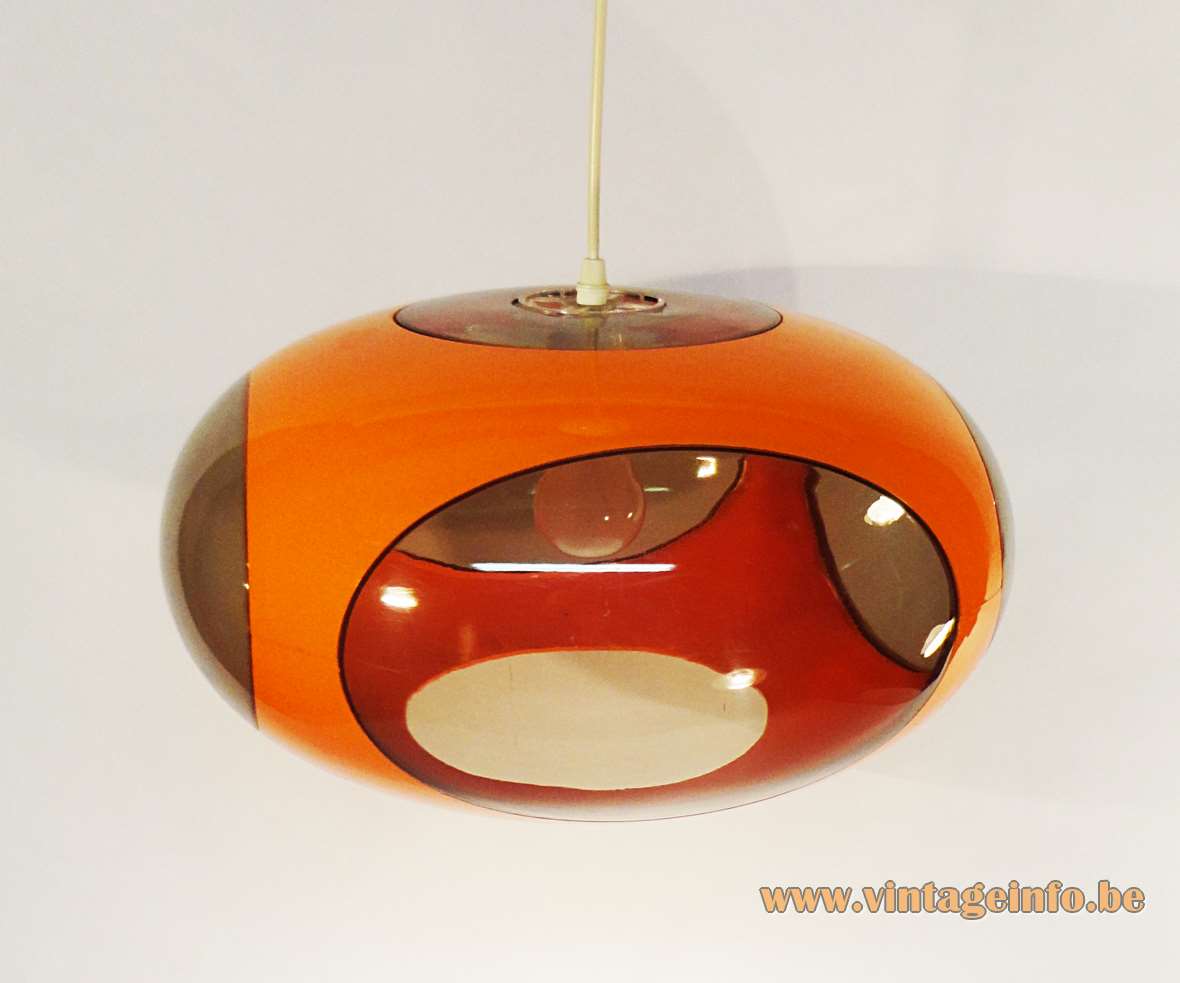 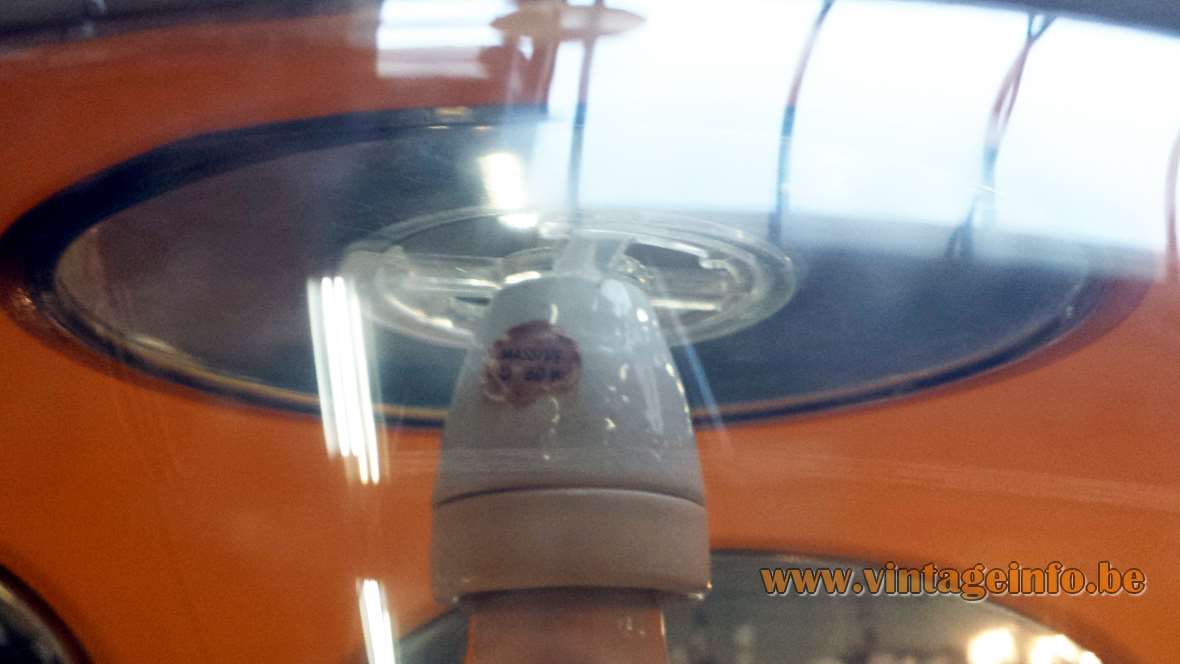 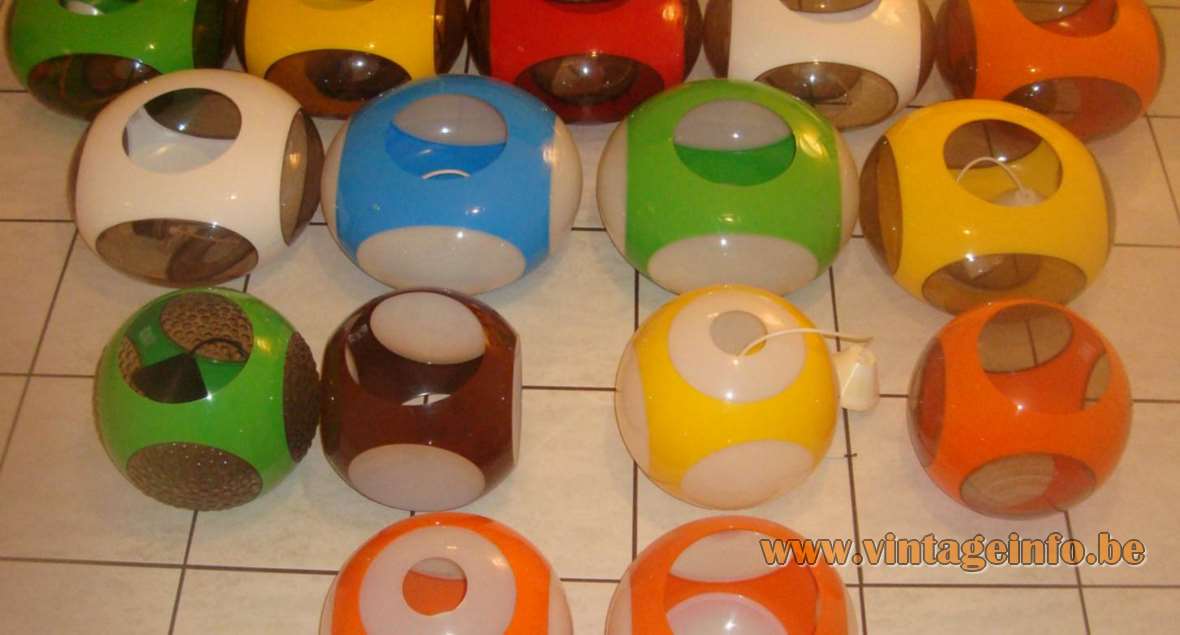 The Massive company – Wikipedia (in Dutch)

In the German ZDF TV show Bares für Rares with Horst Lichter from August 24, 2019 a yellow UFO pendant lamp was shown to the experts. The expert says it’s a lamp designed by Luigi Colani…

In Belgium you can find these lamps for +- 100 euros every day. Probably also in Germany. They were mass produced.

Sigh. This way, this fable never gets out of the world. “The objects presented are first commented by an expert, who also verifies their authenticity” That’s what they forgot to do, I presume… But it is only TV. It is not important if it is right.

A yellow version of this UFO pendant lamp appears in the 2009 film Mr. Nobody. A science fiction drama film written and directed by Jaco Van Dormael. Starring Jared Leto, Sarah Polley and Diane Kruger. Many other lamps appear in this film.

A round orange version of this UFO pendant lamp was used as a prop in the 2021 Belgian comedy TV series Baraki. Here in episode 6, series 1, in a moving box. Starring Pierre Nisse, Julien Vargas and Sophie Breyer. 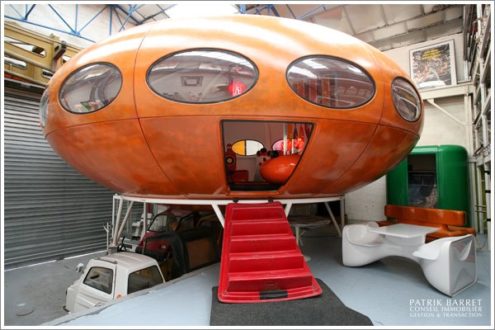 First of all, these pendant lamps are NOT a design by Luigi Colani.

Other versions: This “Luigi Colani” UFO pendant lamp exists in several colours, models and forms. Also a version with a rise & fall mechanism exists, it has a handle below. They were produced for several years. You can find them with porcelain and Bakelite sockets. Sometimes a floor lamp appears. Often said that they are homemade, but it happens a little too regularly. This lamp is often named bug eye lamp.

Despite everyone says that this typical plastic age pendant lamp is designed by Luigi Colani, it is not. It is a pendant lamp made by the Belgian brand Massive. The label is often missing. It was made of paper and after all those years, most of them fell away and were lost.

How the story got into the world is just guesswork, but in the late 1990s there were only a few websites with vintage lamps and a dealer based at the Kloosterstraat in Antwerp, Belgium advertised this lamp as Colani.

In fact this lamp has nothing to do with Luigi Colani whatsoever as confirmed by the owner of the Colani website. Also, this lamp is not mentioned in any catalogue about Colani.
In some pendant lamps the sticker of the Massive company is still present. Often removed to make it more “Colani”. Massive has always had the reputation of being cheap and junk in the Benelux.

This UFO pendant lamp has some similarities with the truck Colani designed. But probably the design was “inspired” by the Futuro house Finnish architect Matti Suuronen created in 1968.

Another Colani hoax is the plastic Drumbo elephant. It is a design by Bernd Diefenbach from 1972 for Munich-based design agency Design Institut GmbH commissioned by the German Dresdner Bank, today named Commerzbank. The elephants are for sale on their website.

In 2014 Luigi Colani himself denied that he designed it in an interview with a Japanese website. Luigi Colani however designed an elephant for Caparol, a paint company. It is a black elephant with colourful stripes, designed in 1984.

In The Netherlands these UFO lamps were also sold by Steinhauer Lighting. IKEA sold similar models. IKEA was only active in Sweden, Norway, Switzerland and Germany at that time.

Massive label on the porcelain socket

A rare seen UFO floor lamp (together with the pilot ;)). Spotted in 2015 at a design fair in Paris, France. Often said that these floor lamps are home-made, but I have seen to many of them in the last 20 years, all made the same way and all with 2 light bulbs. 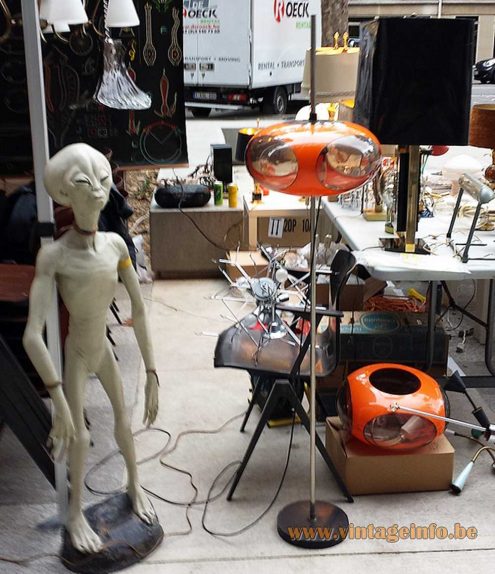 Professor Luigi Colani, born in Berlin in 1928, is among the pioneers of industrial product design. Since the 1950s, he has been merging aesthetics in creating the articles of daily use that he makes out of plastic. Plastics has made a major contribution to implementing design ideas in cost-efficient mass production. The prime characteristic of Colani’s design are the rounded, organic forms (“bio-morph design”). Luigi Colani died 16 September 2019, he was 91 years old. 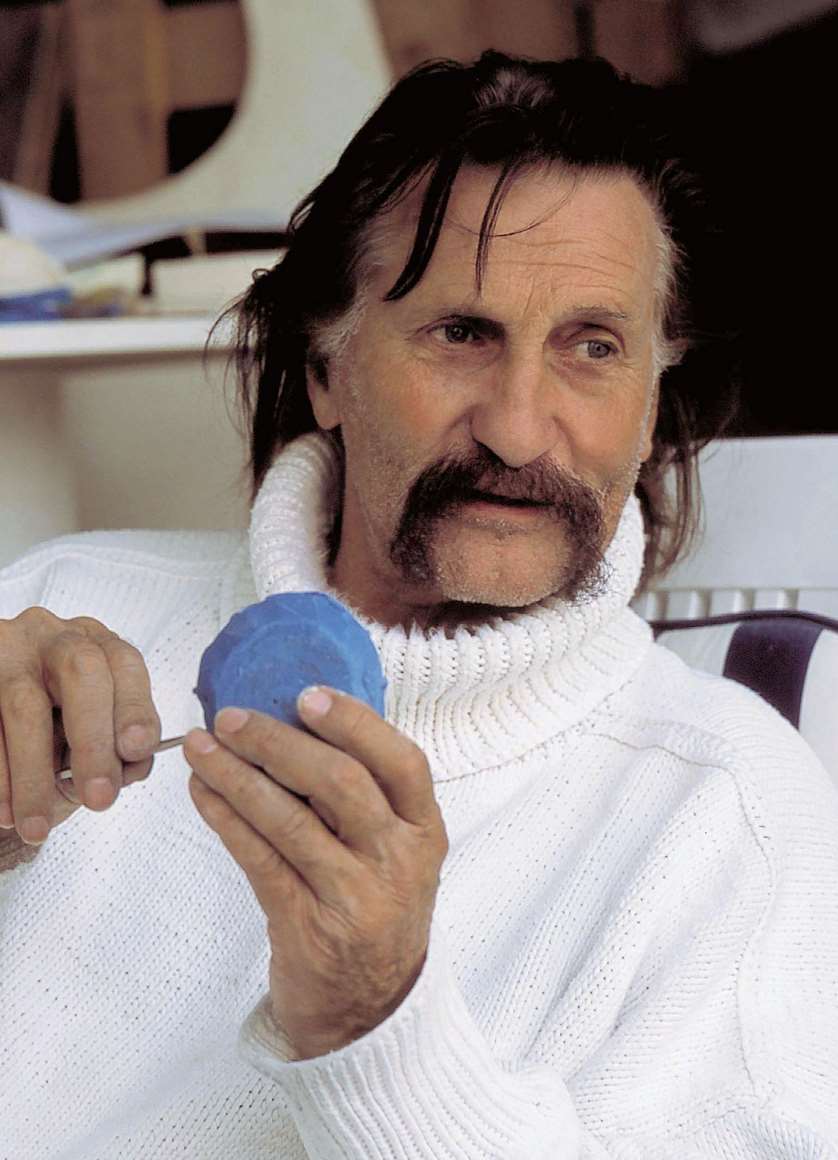 A very similar UFO pendant lamp was used as a prop in the 1973 American ecological dystopian thriller film Soylent Green. Starring Charlton Heston, Leigh Taylor-Young and Chuck Connors. This pendant lamp, maker unknown, is closed below and uses 3 or 4 light bulbs. Do you have an idea about the maker of this lamp? Please let us know through the contact form and help improve the websites exactitude.

Many thanks to Patrik Barret for the use of the Futuru photo. And also many thanks to Dirk for the photo of the big collection. And of course many thanks to Rüdiger Buhl and Bangert Verlag for the Luigi Colani photo.