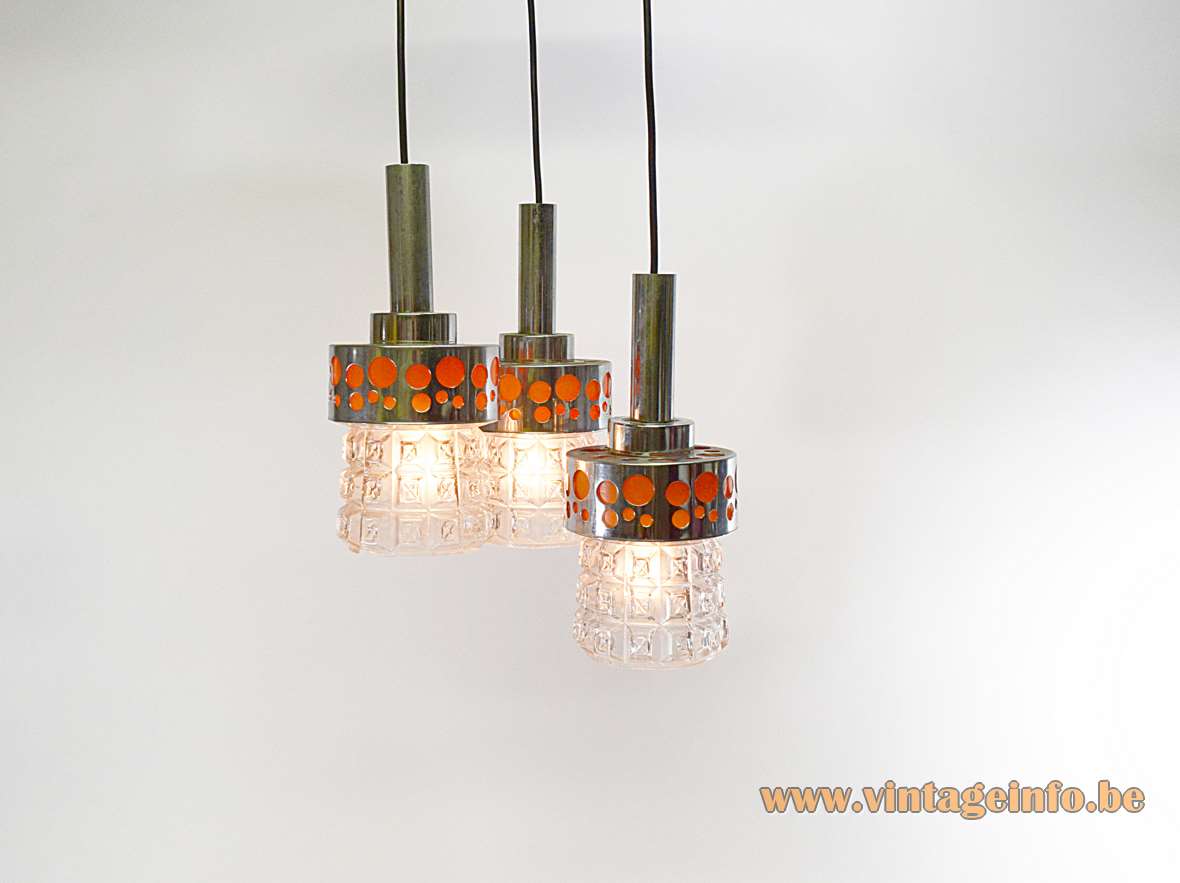 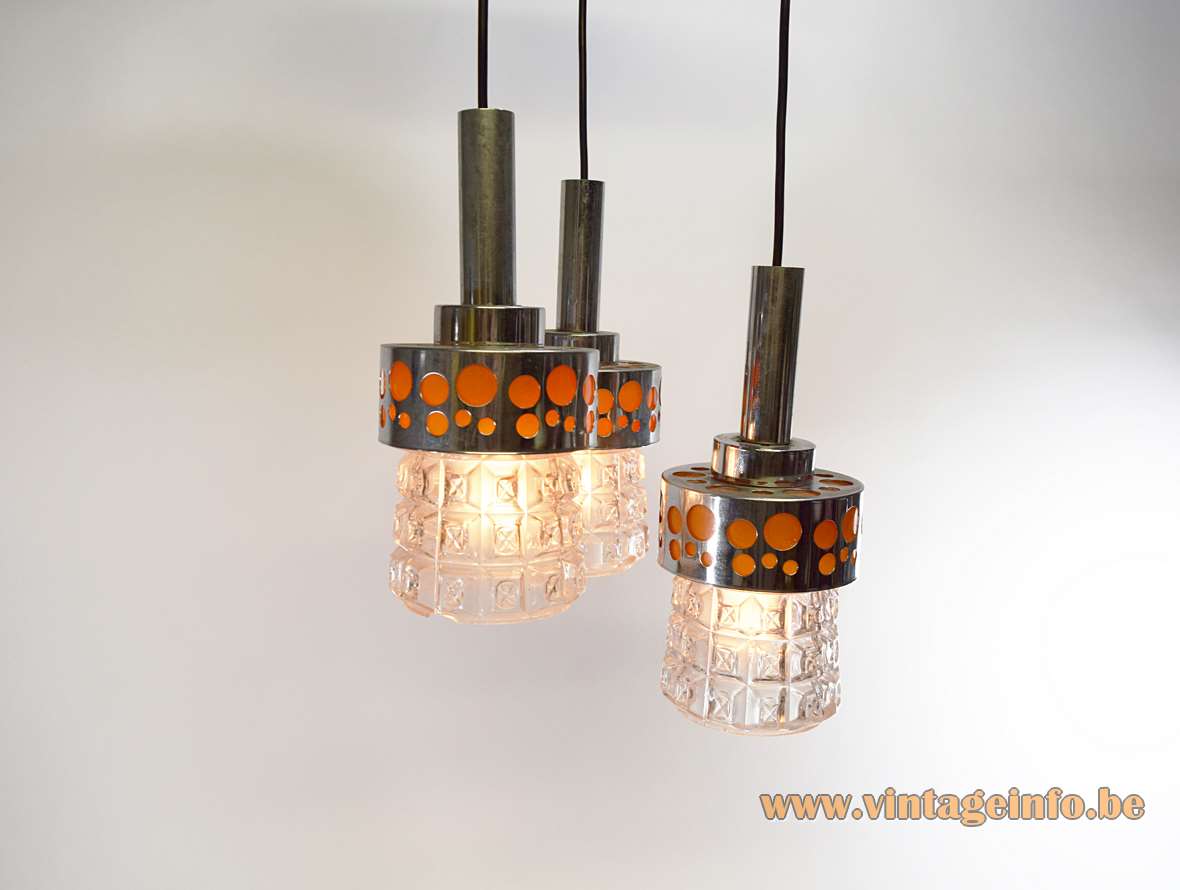 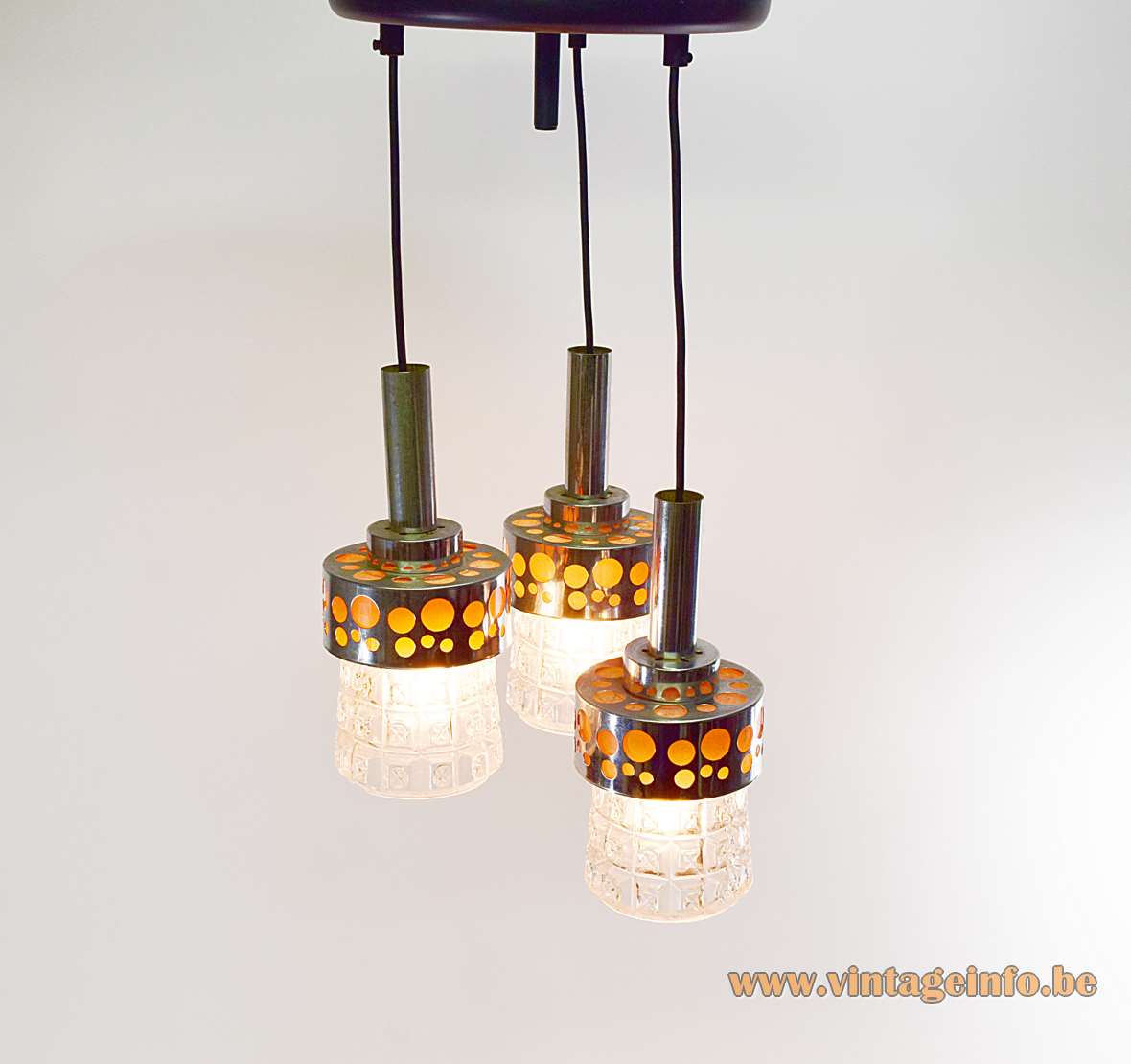 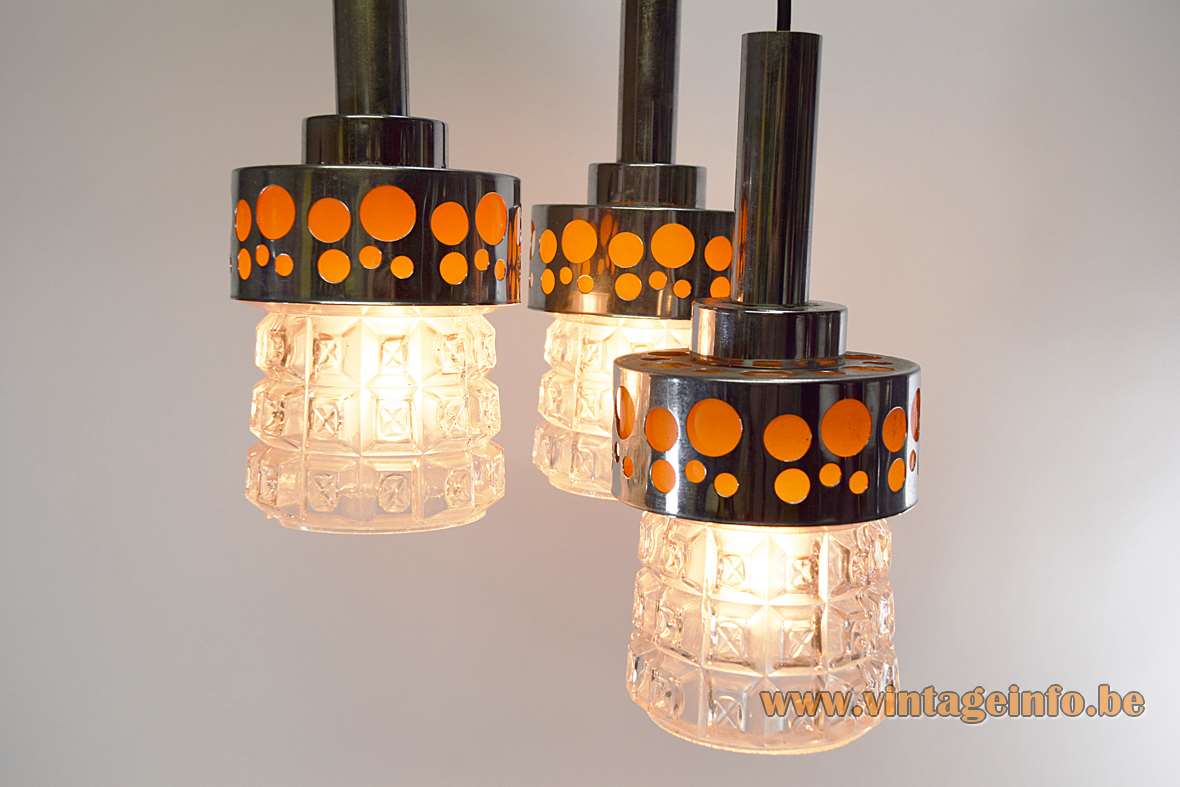 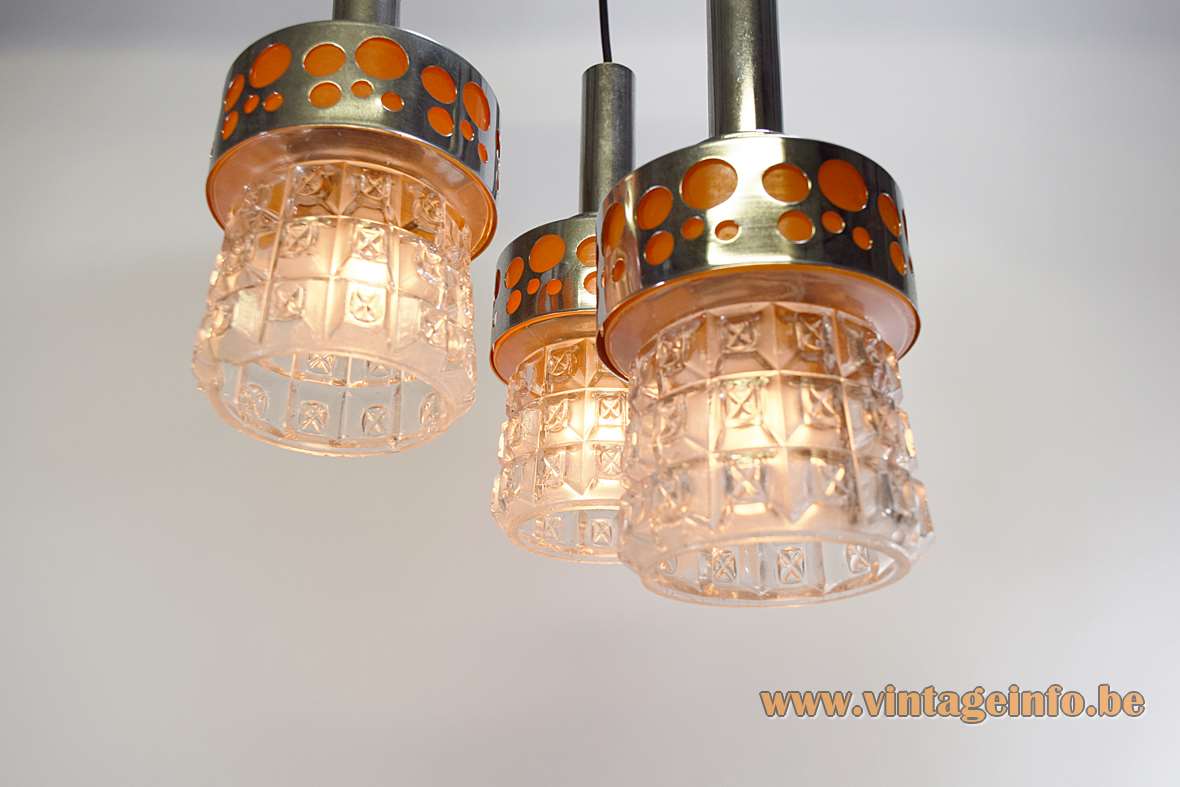 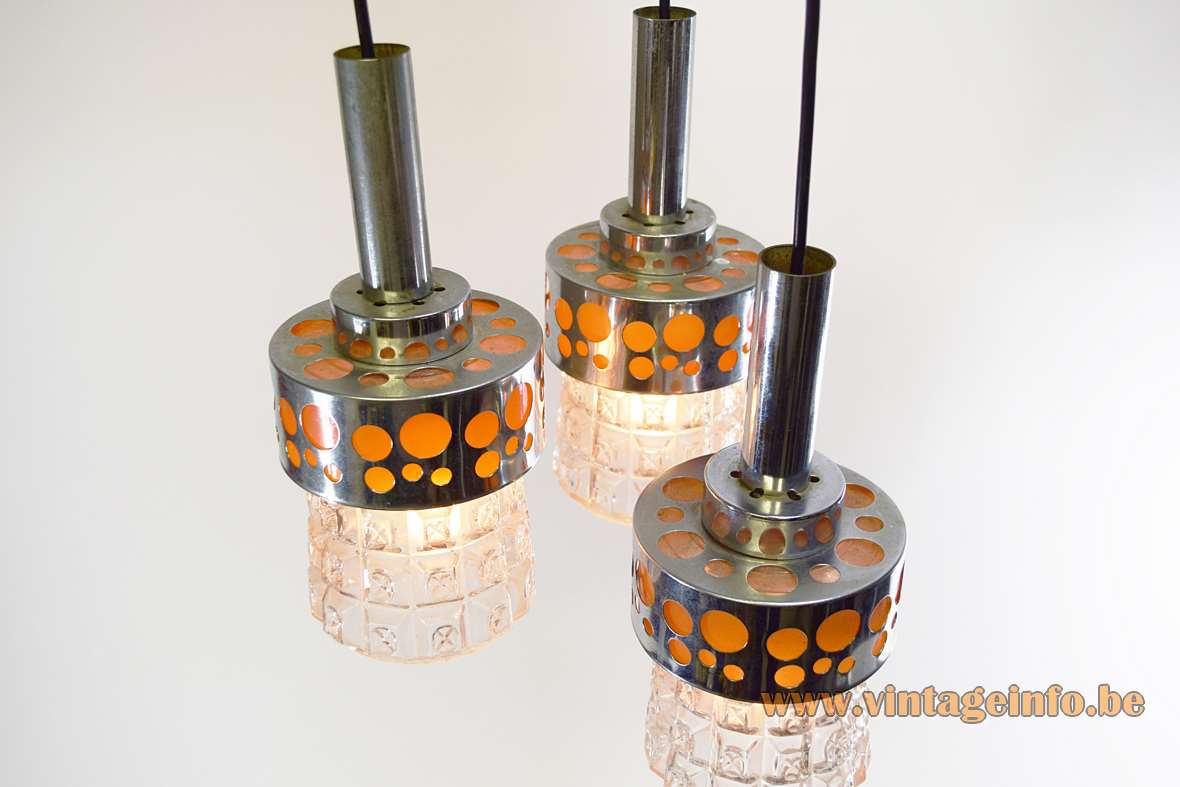 A Massive pendant lamp was used as a prop in the 2017 TV-series La Fôret (The Forrest). La Forêt is a French/Belgium crime series that was shown on La Une and Canvas (Belgium) and on France 3 (France). The story goes about a sixteen-year-old girl that disappears from her village in the Ardennes and the investigation about it.

Other versions: This Massive Belgium triple pendant lamp exists in several colours: white, green, orange… Different models were made, but always with the holes in the chrome plate on top of the lamp. Exists as a single pendant, 3, 5 ,6 and more together, several lights on a rail, together as a chandelier, 6, 8, 12 lamps, wall lamp… they were a huge success.

In some countries these lamps were sold as Space Star lamps. In Germany these pendant lamps were also sold by the Richard Essig company. Richard Essig was a wholesale company who bought among other things old stocks. Essig sold lamps made by Staff, Disderot, Massive and several other companies, labelled with Richard Essig – Besigheim.

The glass of these type of lamps was made by the Belgian glass factory Doyen. The company no longer exists. It was located in Havré-Ville, near Mons and active between 1909 and 1975.

These type of lamps are often sold as lamps from Raak, The Netherlands, but they are not, of course. These lamps are not described in any catalogue of the Raak company and Raak lamps always have a label since the 1960s. Sometimes a label disappears, but not always.

How the story came into the world? There are a few reasons. First of all, in many eyes these are very nice lamps and dealers can not and will not believe that Massive made them. Second, and most important: Raak lamps sell good and for a high price.

Not every dealer is aware that these lamps are not made by Raak, on the contrary. Most of the time people attribute lamps to what they find on the internet, hopefully it will change in time.

The round lamp on the right was also sold by Euroline, another Belgian company. They named it Symphonie. 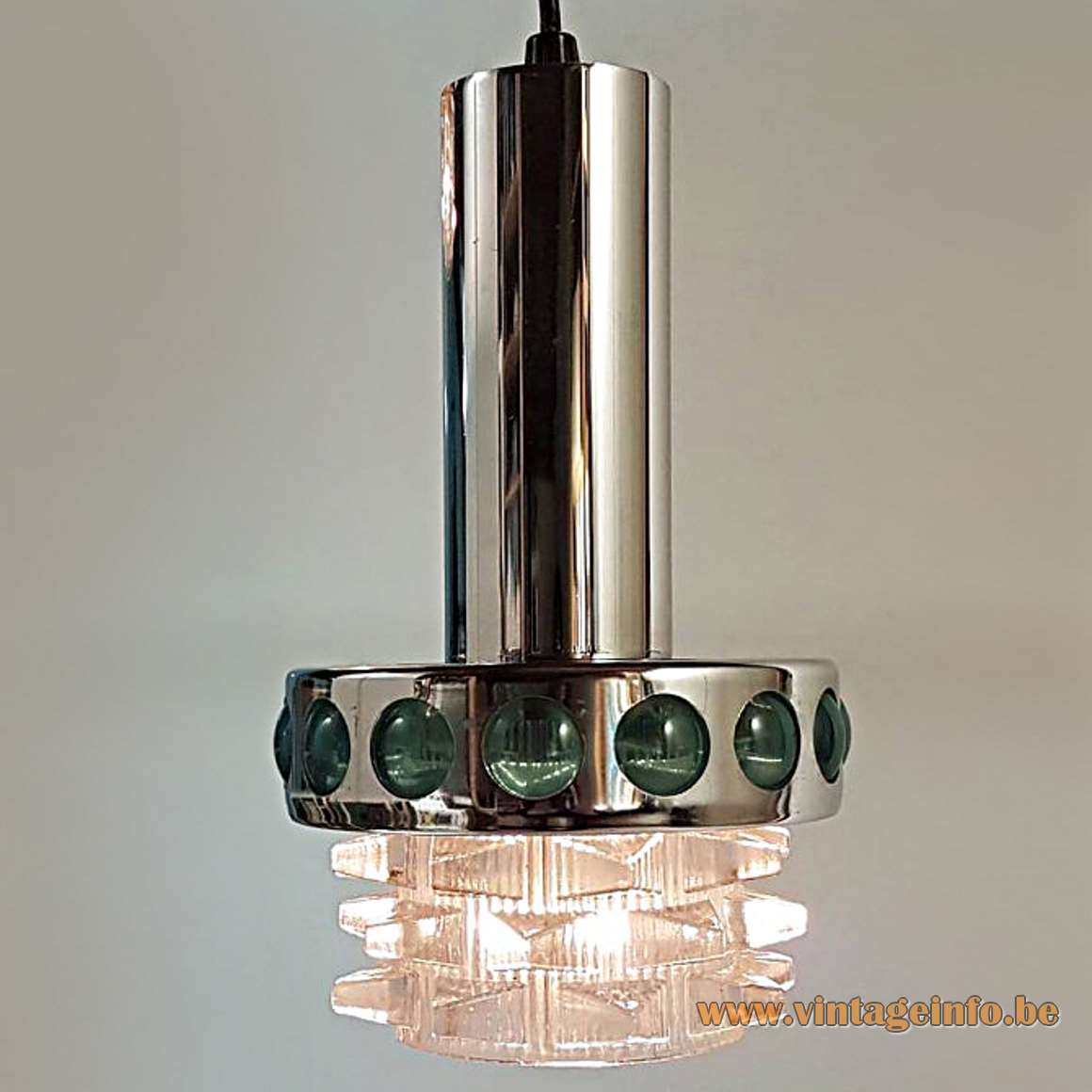 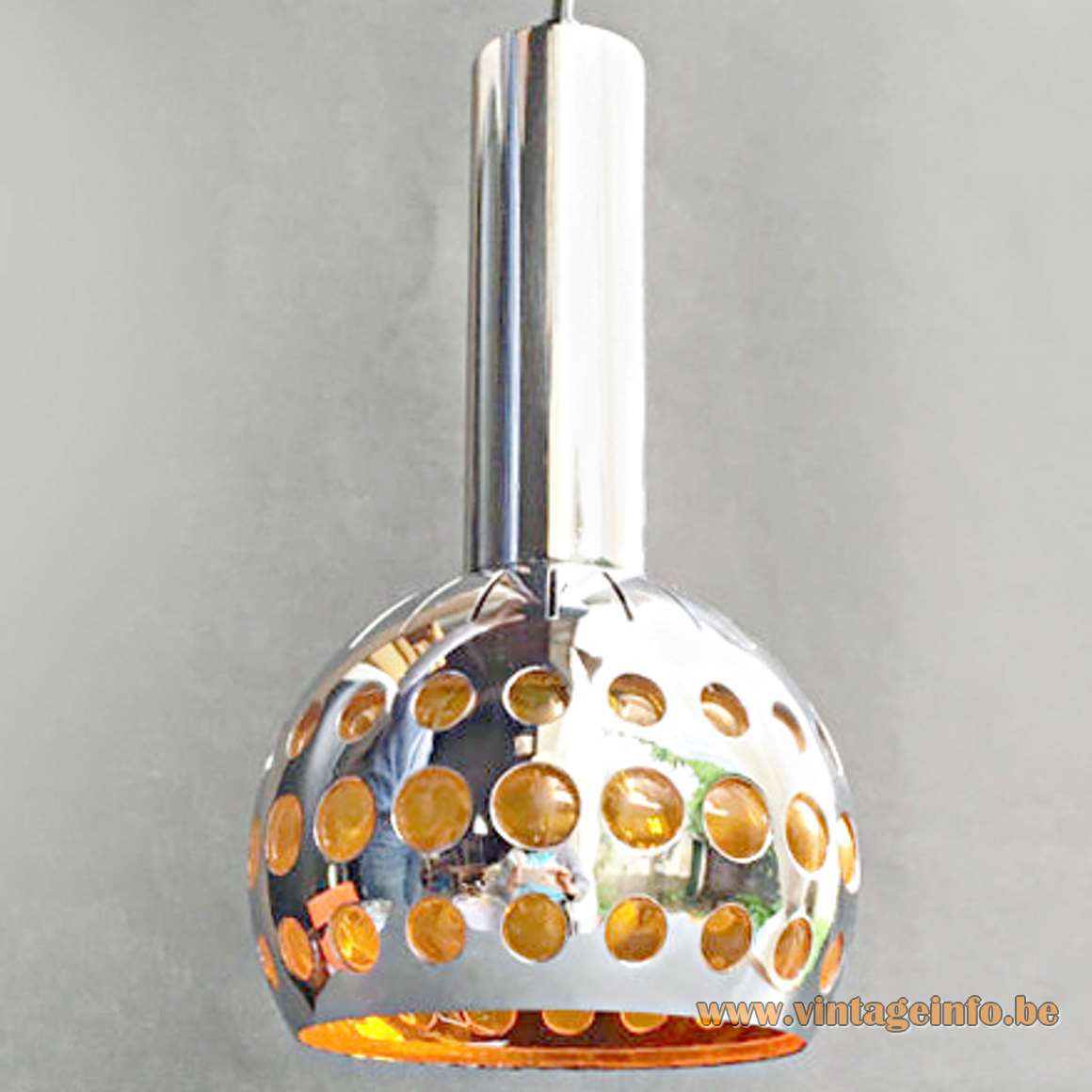 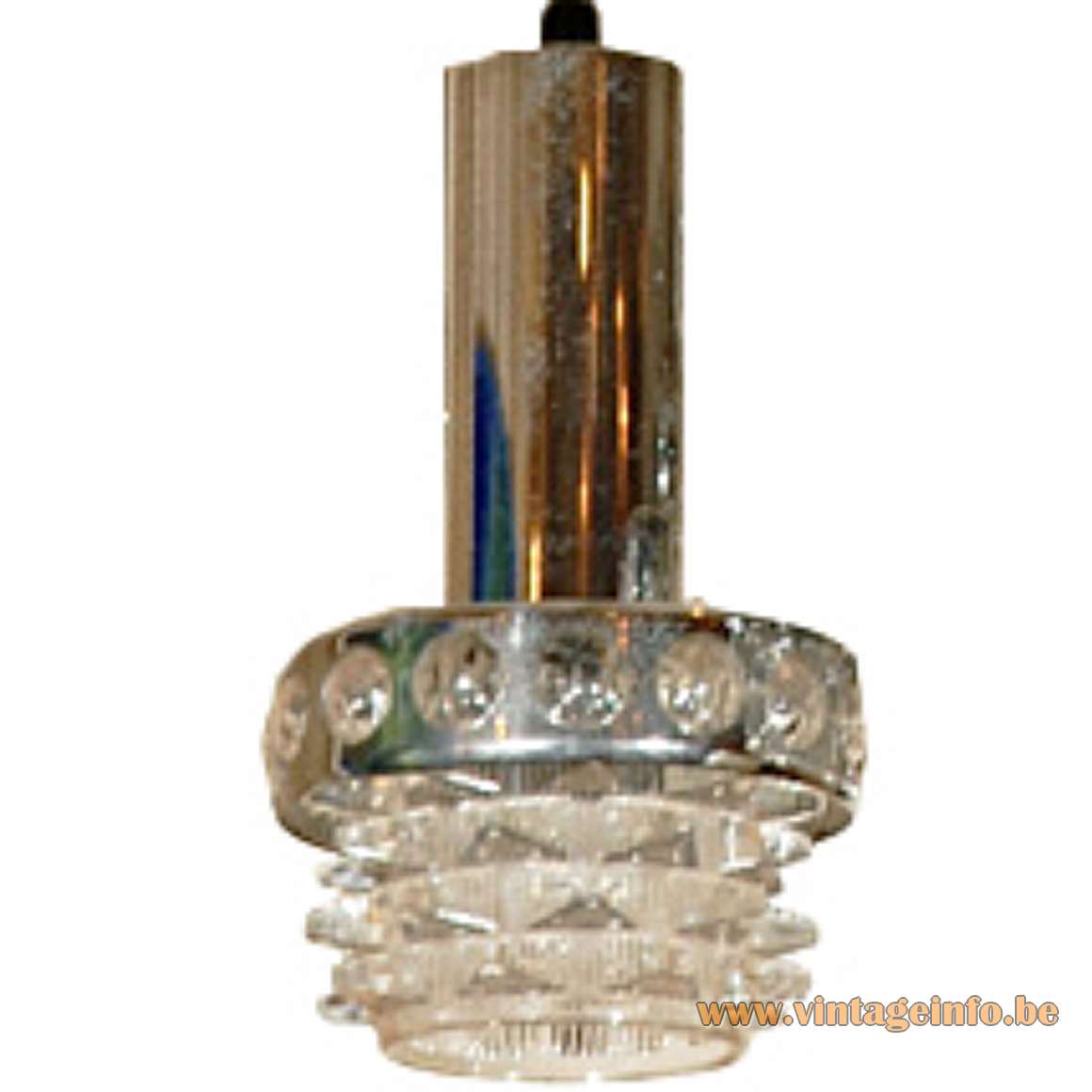 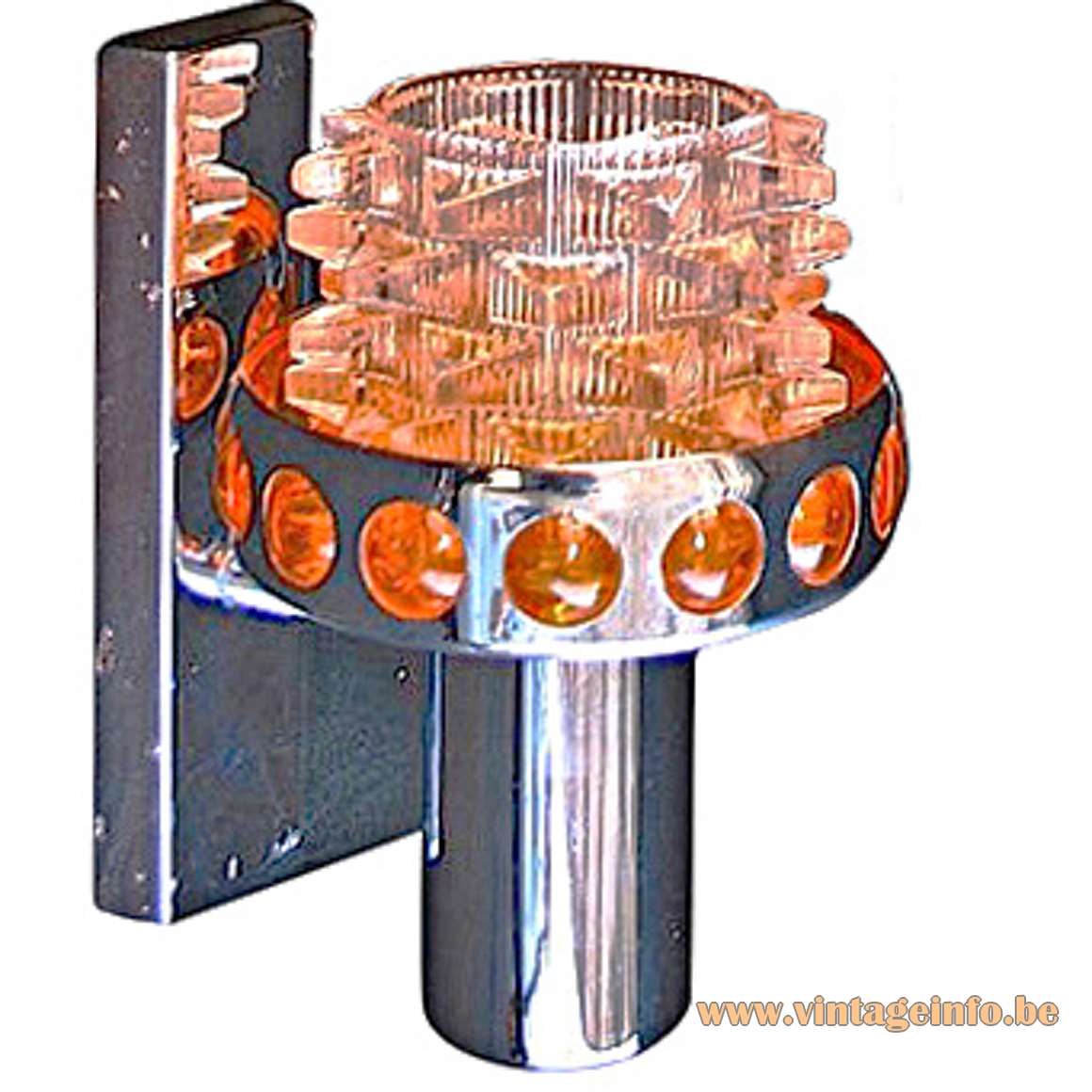 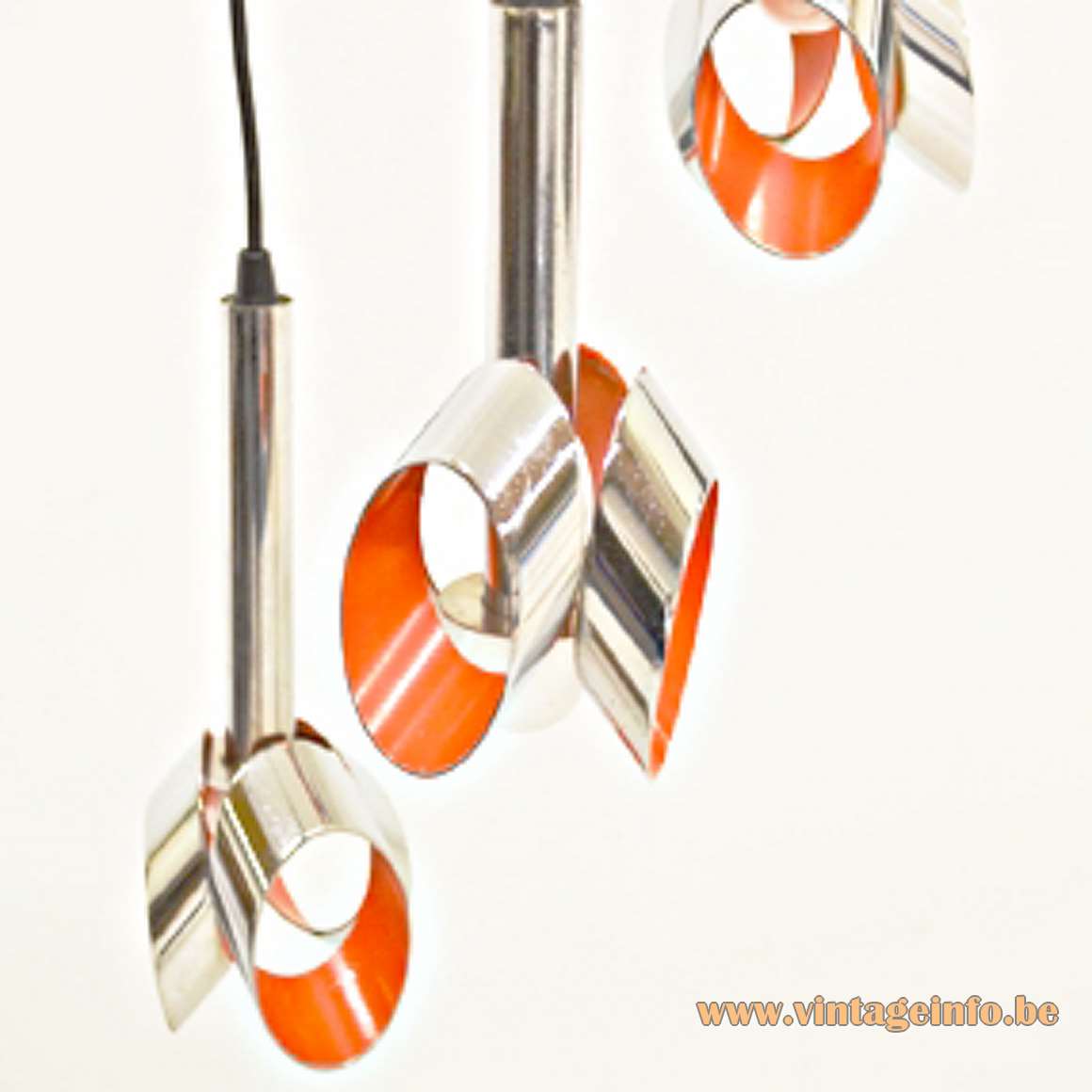 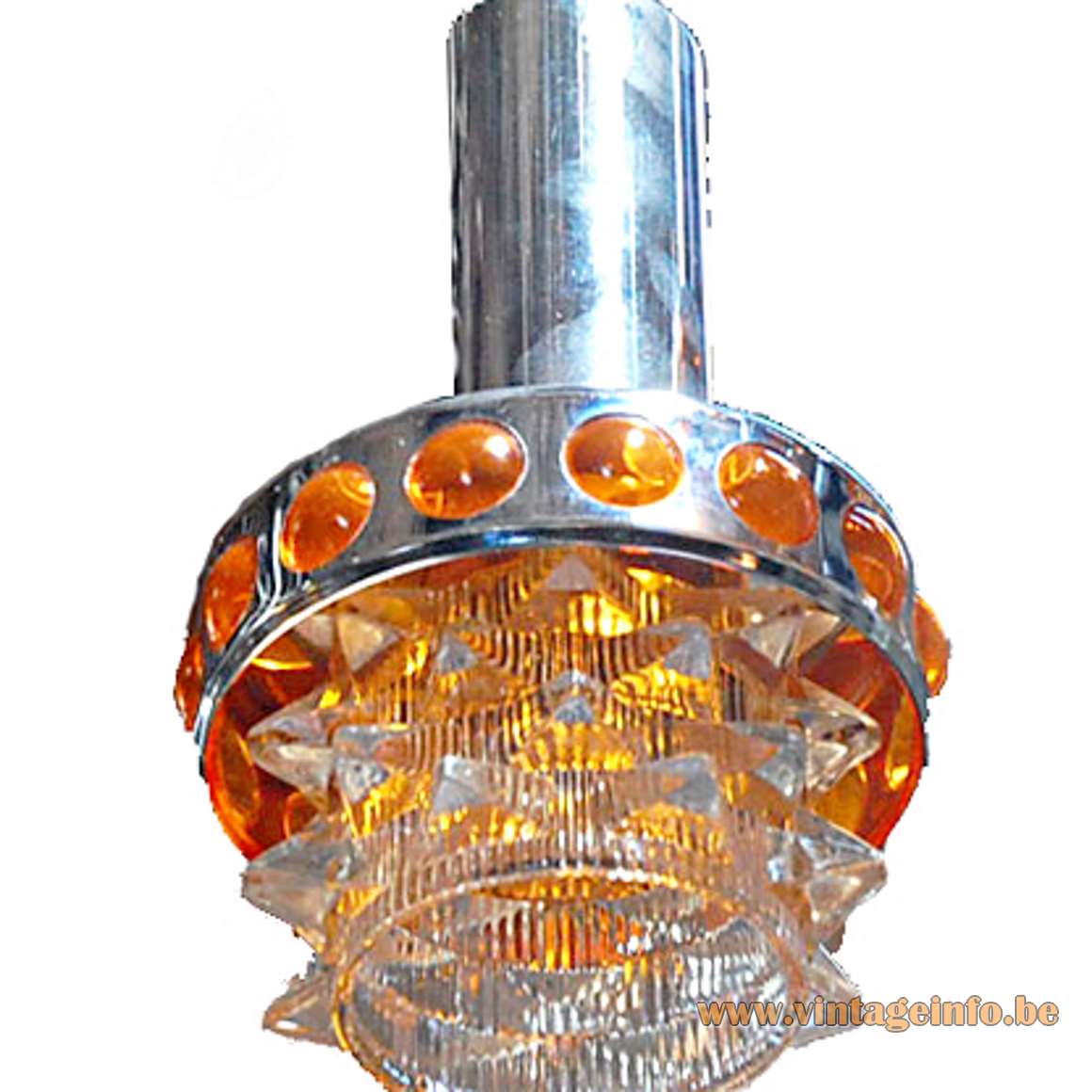 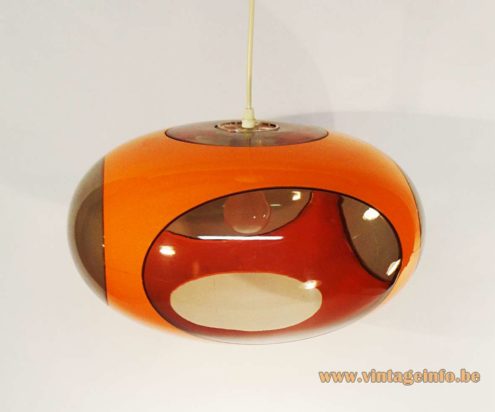