Pan wall lamps were used as a prop in the 1974 French comedy film Le Retour du Grand Blond (The Return of the Tall Blond Man with One Black Shoe). Starring Pierre Richard, Jean Carmet and Jean Rochefort (on the phone in this scene). 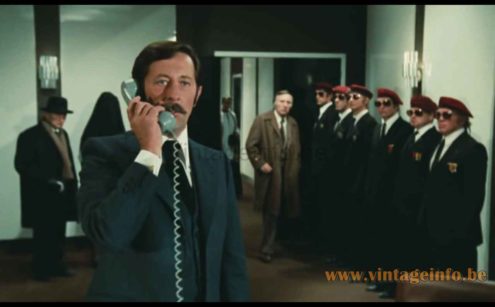 Other versions: This Lyfa Pan-Opticon wall lamp exists in blue, red and yellow. The short but wider version is named Pandean. And the pendant lamp is named Pantre. Another wall lamp with several lamps together and more rounded holes is named Pan. All refering to the Pan flute.

In 1972 the Pan flute became popular because of the music by the Romanian artist Vladimir Cosma and played by Gheorghe Zamfir in the French movie Le Grand Blond Avec Une Chaussure Noire (The Tall Blond Man with One Black Shoe), starring Pierre Richard.

In the sequel of this film, Le Retour du Grand Blond (The Return of the Tall Blond Man with One Black Shoe) from 1974, Pan wall lamps were used as a prop. The maker is unknown, but they are very similar with the Pan pendant lamp by Bent Karlby. Maybe they were made for the film.

These wall lamps are reminiscent to the Fuga wall lamps designed by Maija Liisa Komulainen in the 1950s for the Dutch Raak company. Several other companies produced similar lamps in the 60s and 70s.

Many thanks to Christian for the beautiful pictures and enthusiasm. You can find his shop over here on Ebay.