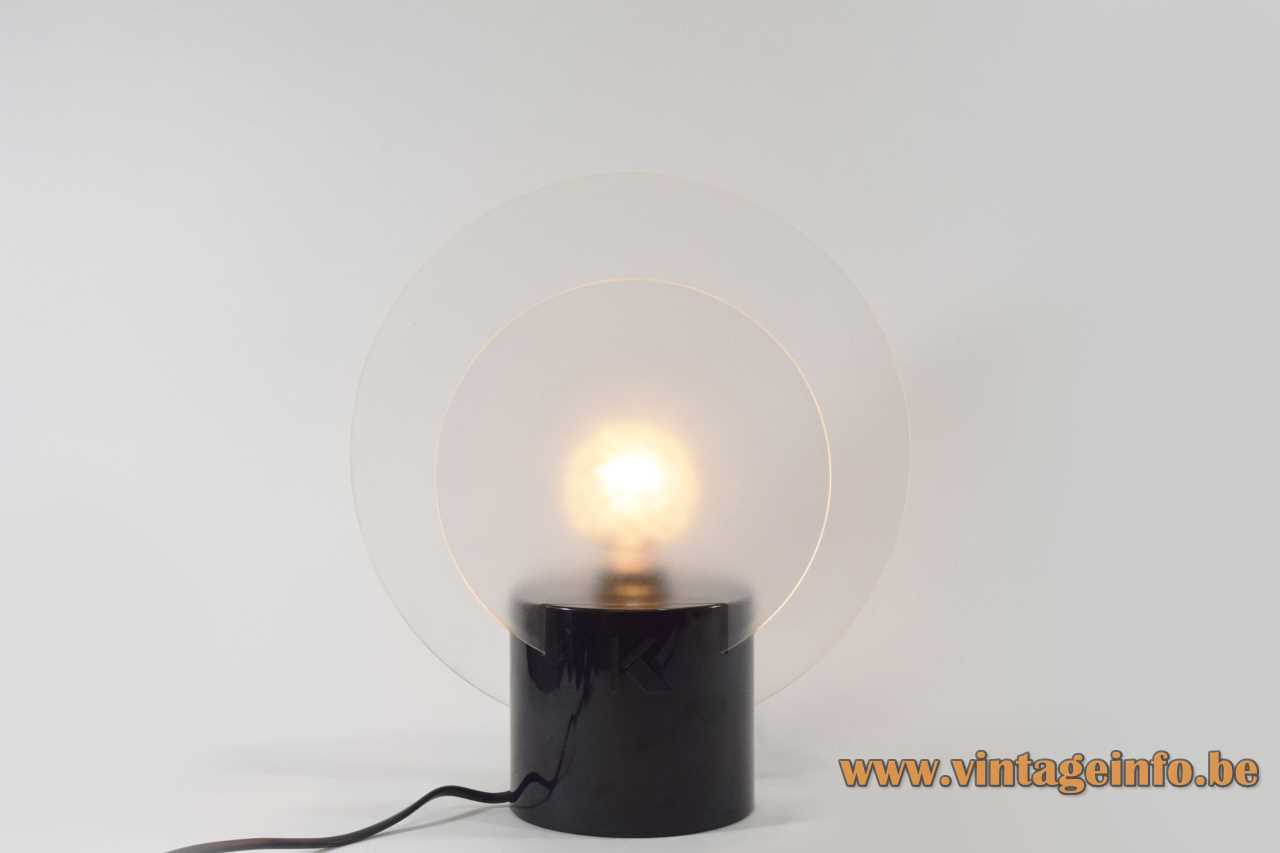 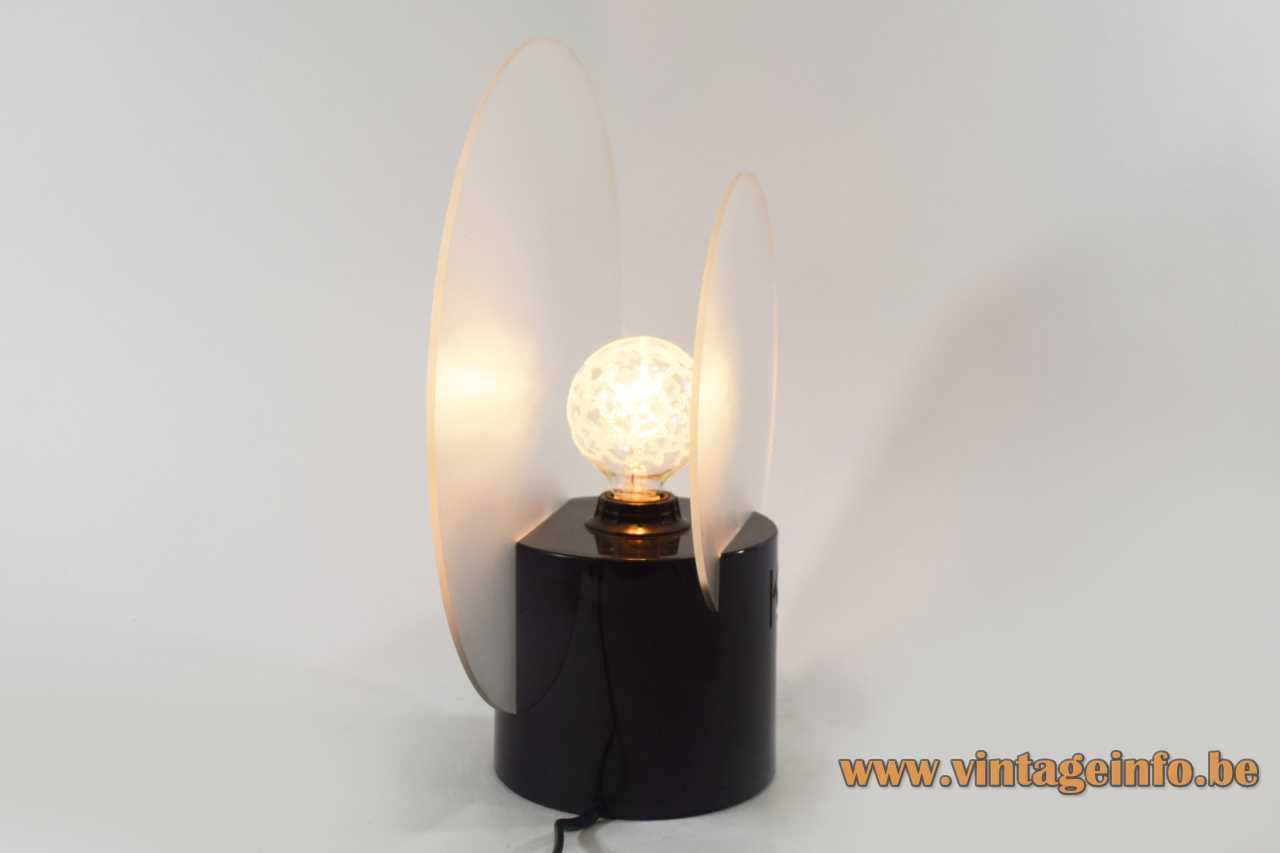 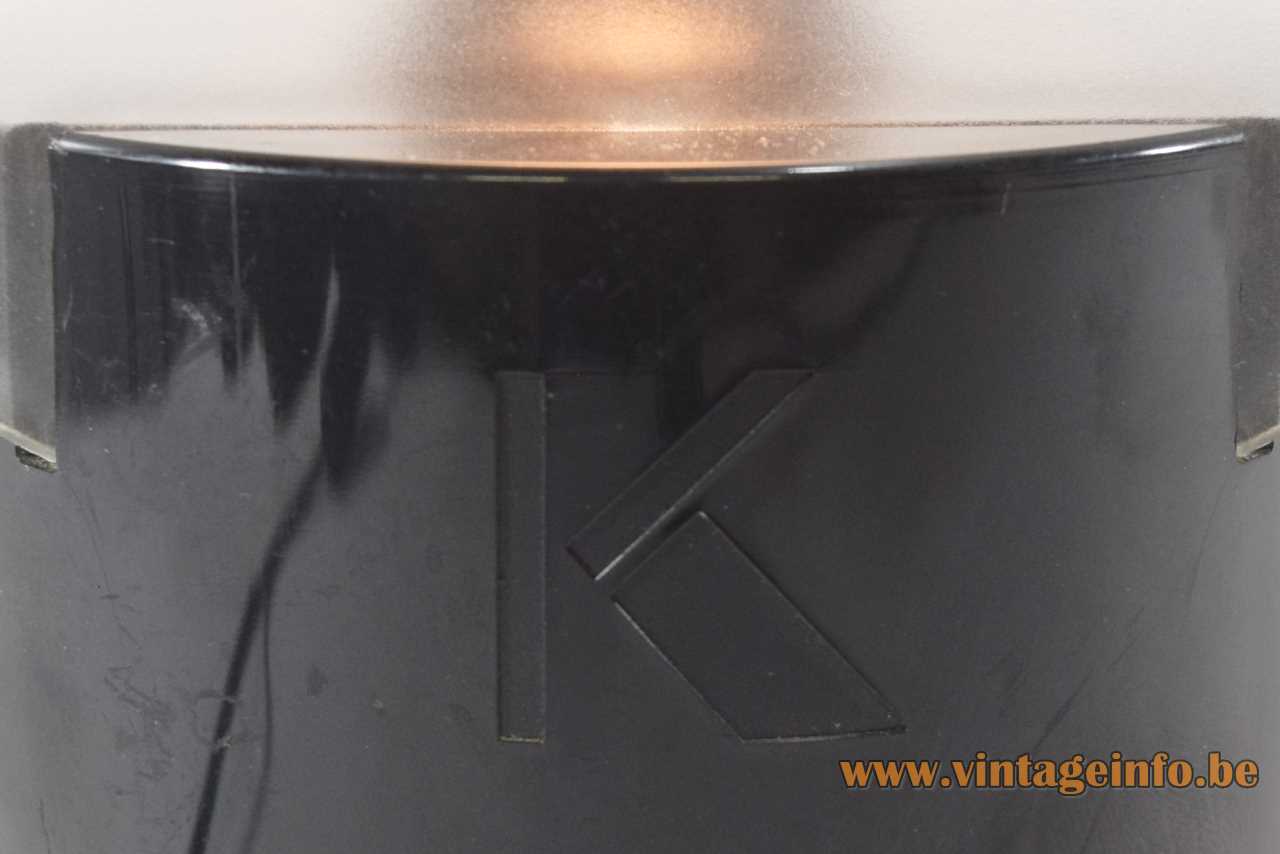 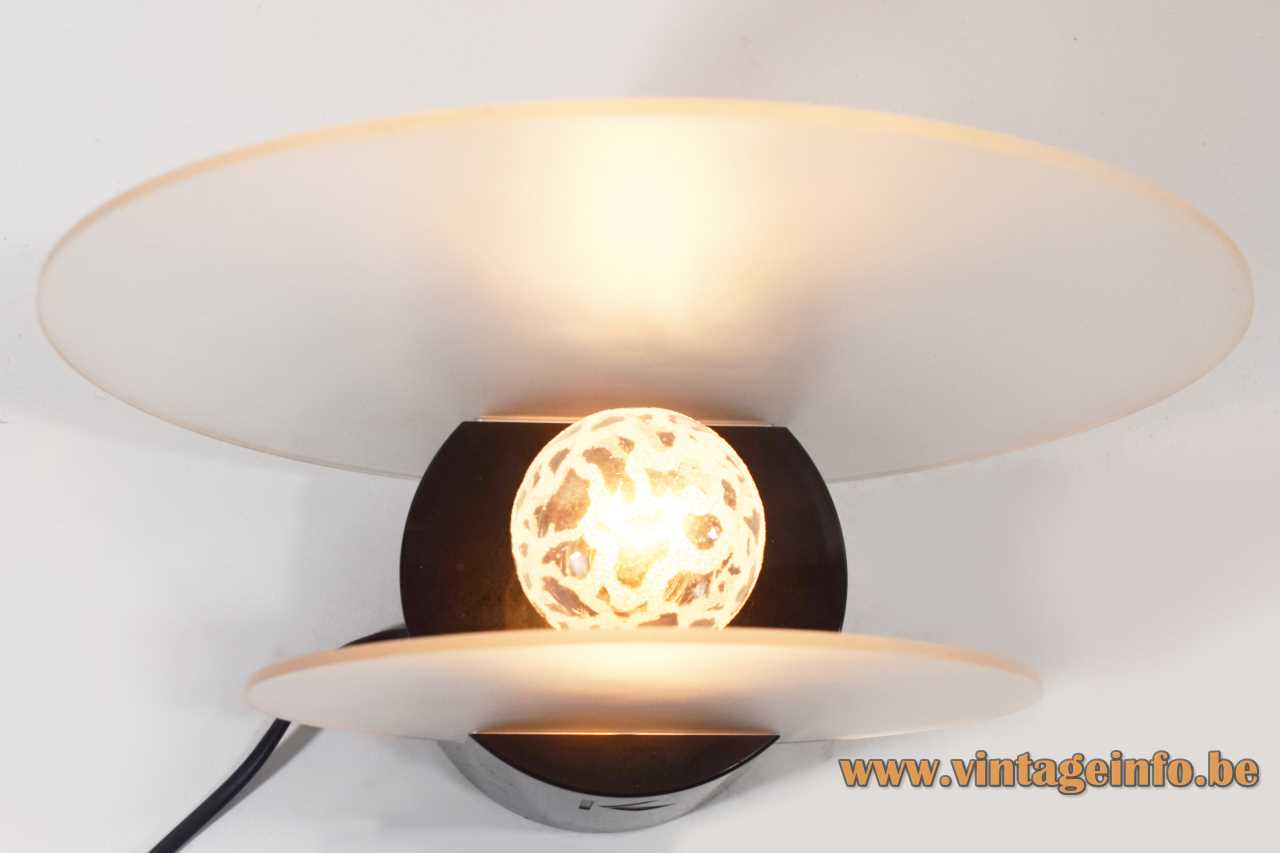 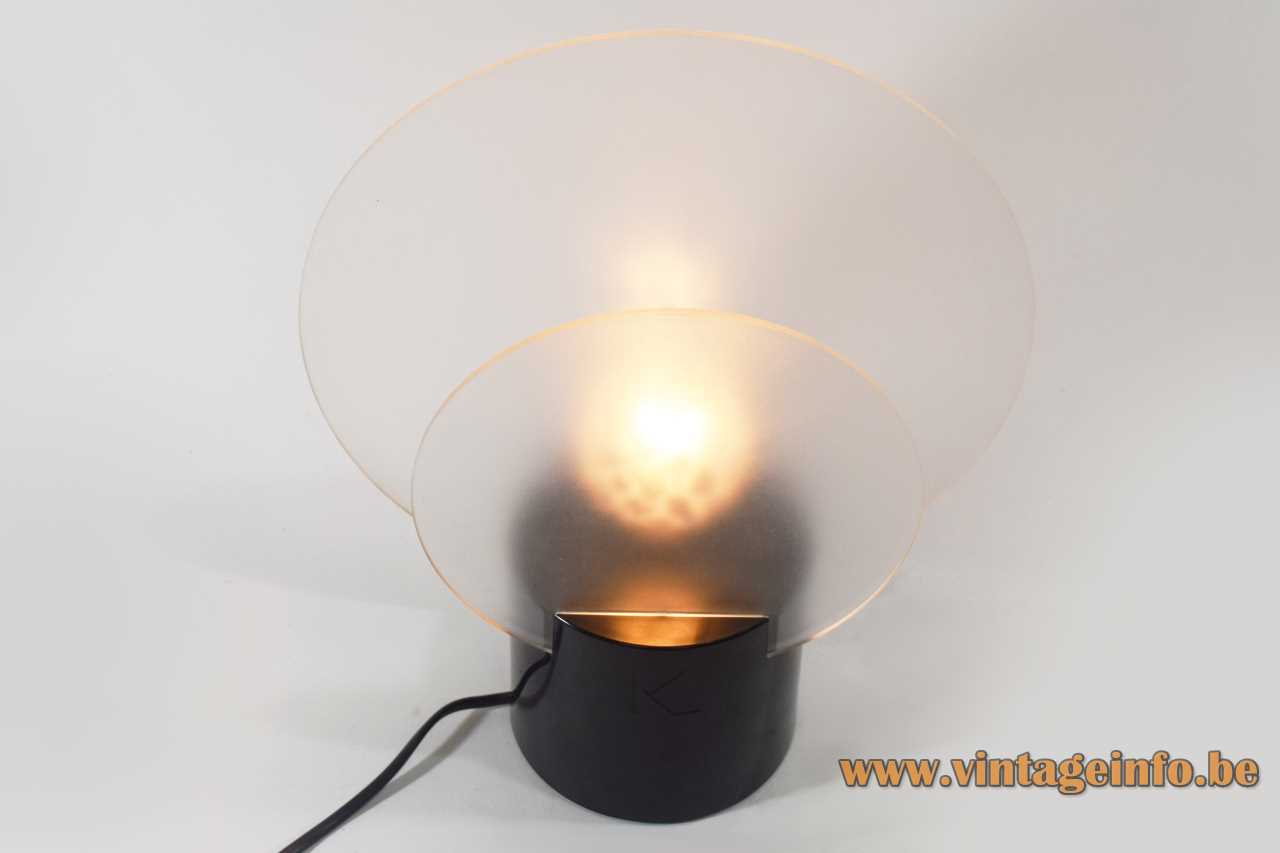 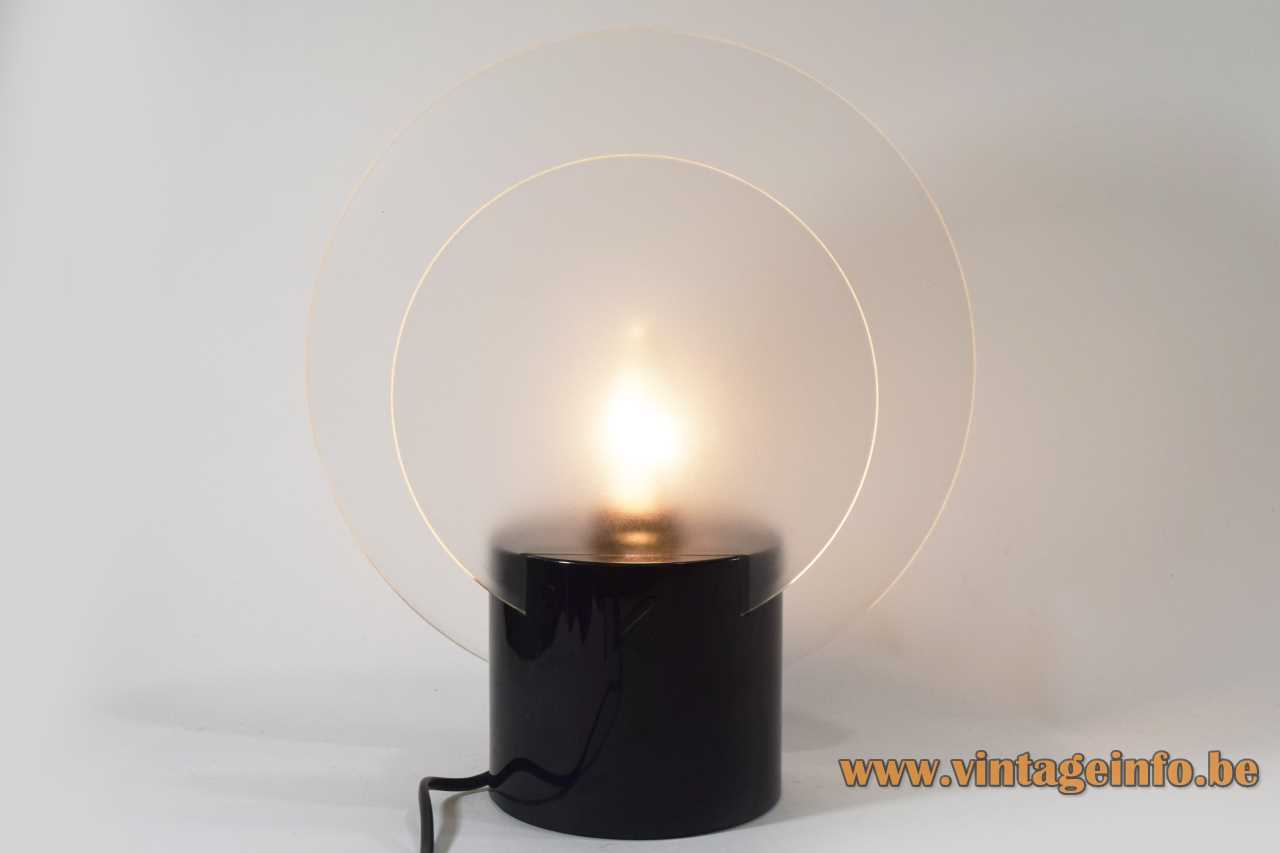 Materials: Round black plastic base with the Krizia logo moulded in front. Counterweight inside the base. Two frosted clear acrylic discs lampshade in 2 sizes. Bakelite E14 socket.

Electricity: 1 bulb E14, 1 x 40 watt maximum, 110/220 volt.
Any type of light bulb can be used. Not a specific one preferred. For this setup gold-croco-ice light bulbs from Paulmann were used.

Other versions: This Krizia discs table lamp exists only in 1 version.

These lamps were also sold by L’Oca Nera (black goose), an Italian chain of home goods stores with a goose as its logo.

The Krizia company is not a lighting company. It is a fashion brand founded in 1957. The name Krizia is borrowed from one of Plato’s dialogues on female vanity.

Krizia arrived at the first fashion show in 1964 at Palazzo Pitti in Florence with a collection in black and white, thanks to which it won the “Fashion criticism” award.

Text from LinkedIn: “Curious about everything and everyone, Krizia fashion is open to art and culture and leads to love, conglobate and quote, with rapid metabolism, the stars of Schifano and the surface line point of Kandinsky, the cuts of Fontana and surrealism by Magritte.”

“In 1985, the Spazio Krizia (Krizia space) was opened. A multipurpose theater and free gathering place, which over the years has hosted the major exponents of international culture such as Sting, Luciano Pavarotti and Andy Warhol. Spazio Krizia was also among the first locations of the “Fuorisalone del Mobile“, hosting internationally renowned designers such as Ron Arad and lighting designer Ingo Maurer.

In 2014 Krizia was acquired by the company Marisfrolg Fashion Co. Ltd, from China. Today Krizia is named Krizia International srl.

All the electric parts were made by VLM Components in the late 80s, early 90s. The company was founded in 1945 in Buccinasco, a small village near Milan, Italy. The company became famous for the switches they produce since 1968, designed by Achille Castiglioni.
VLM is part of the Relco Group, founded in 1967. Today they are the owners of the brands Relco, Leuci, Relco Lighting, VLM and Segno.