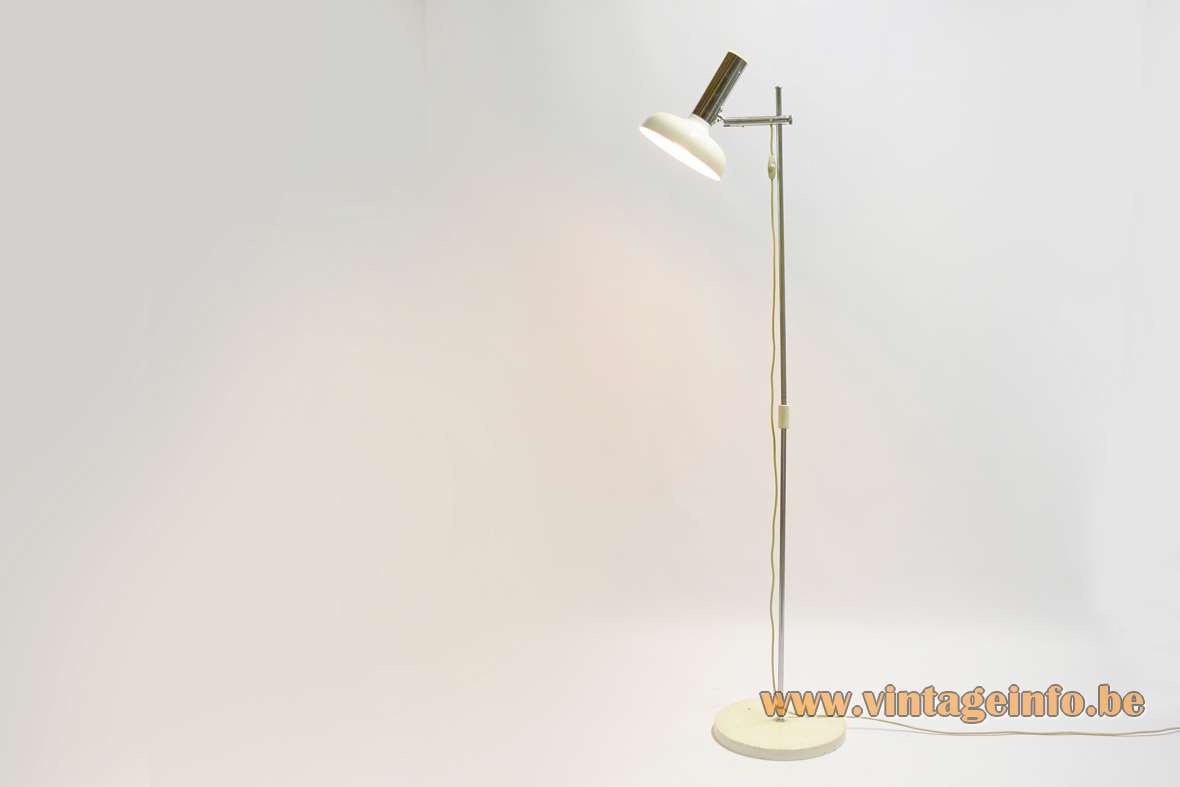 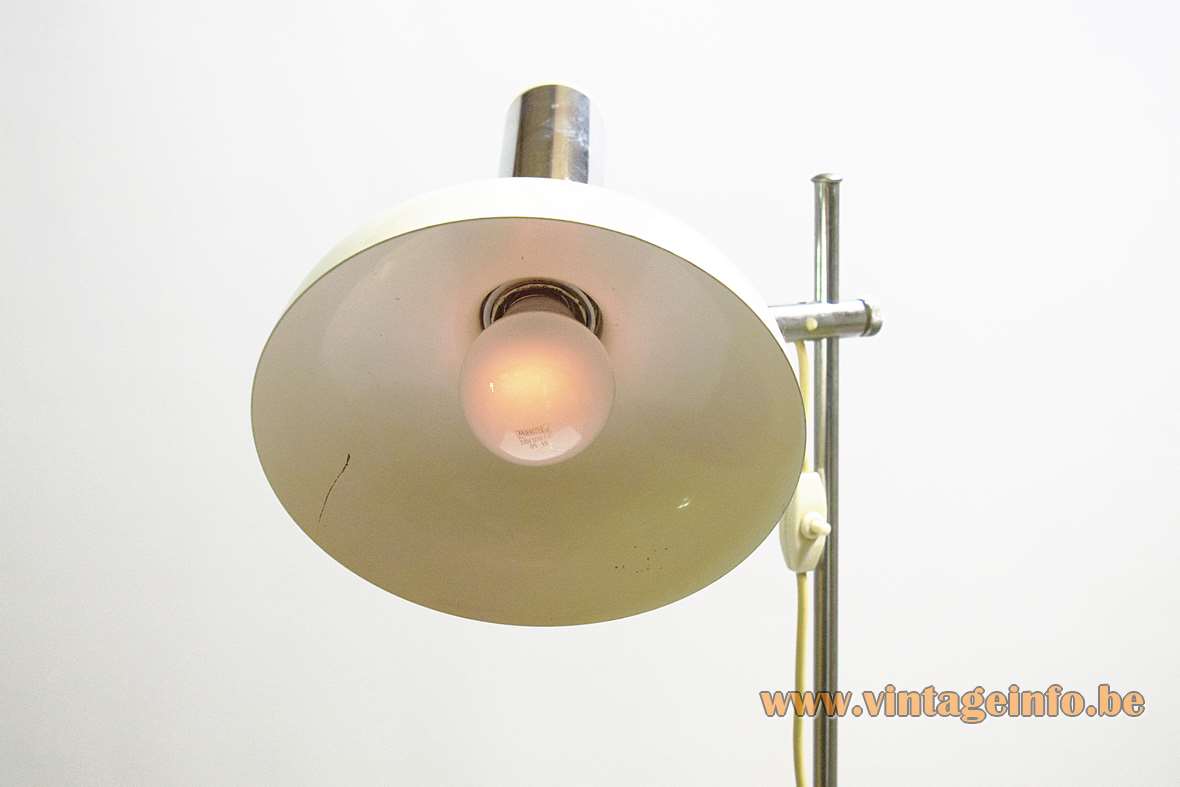 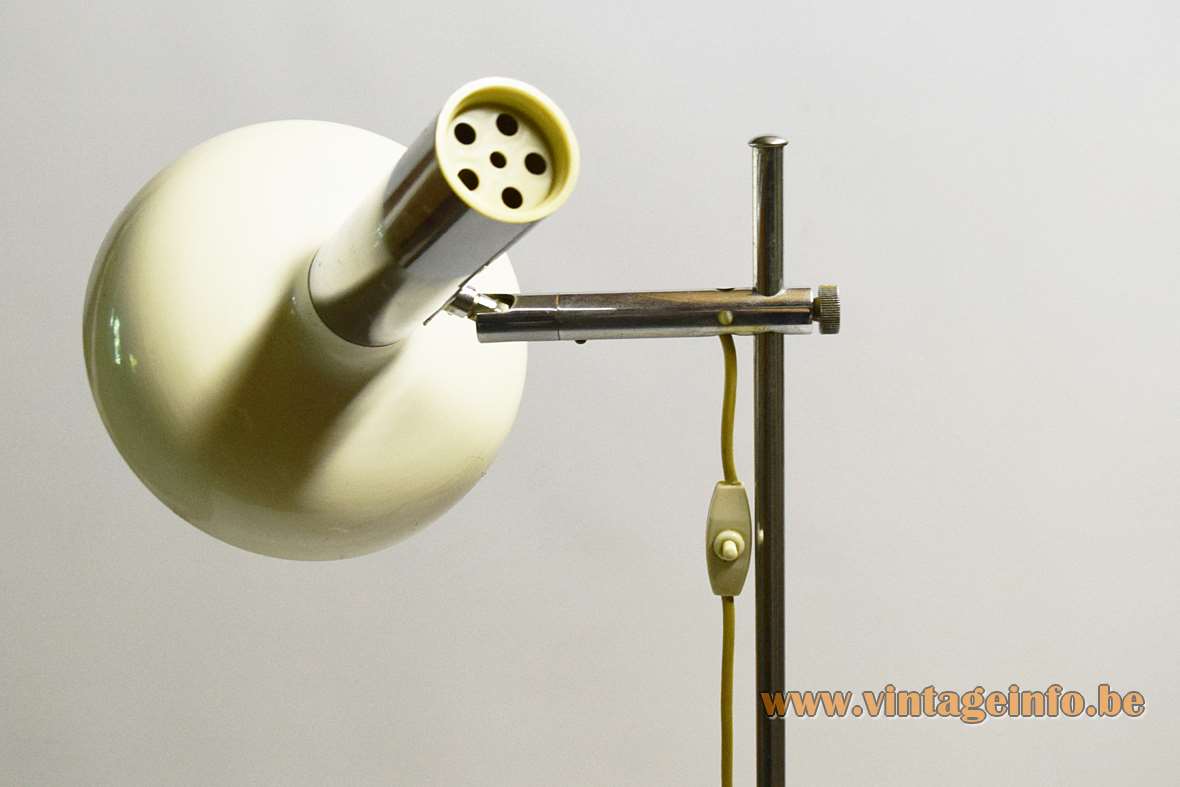 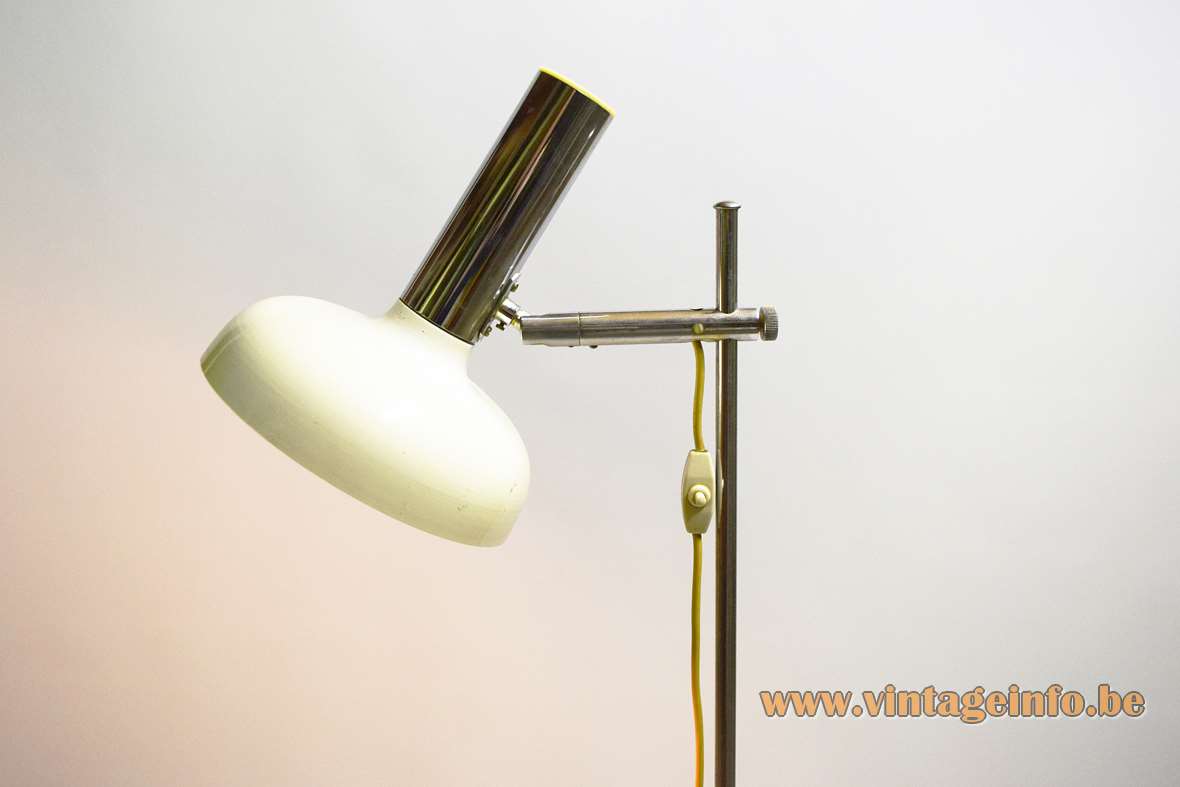 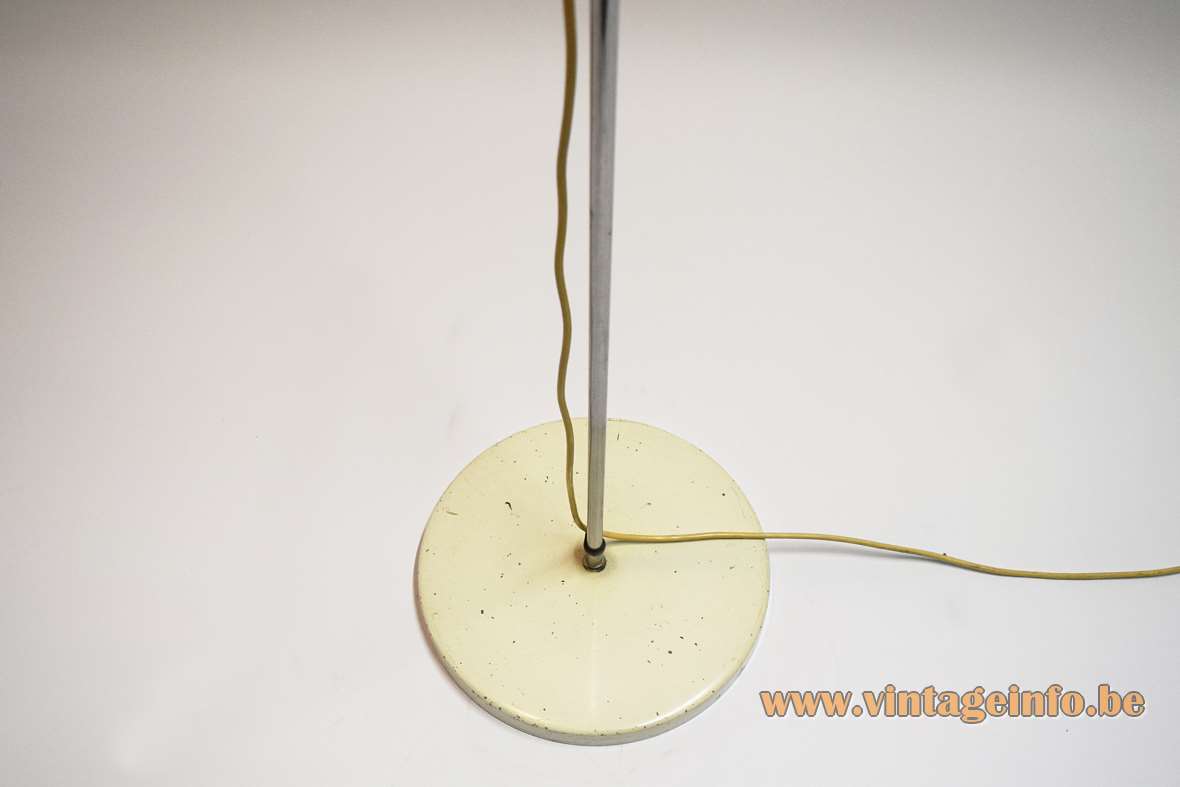 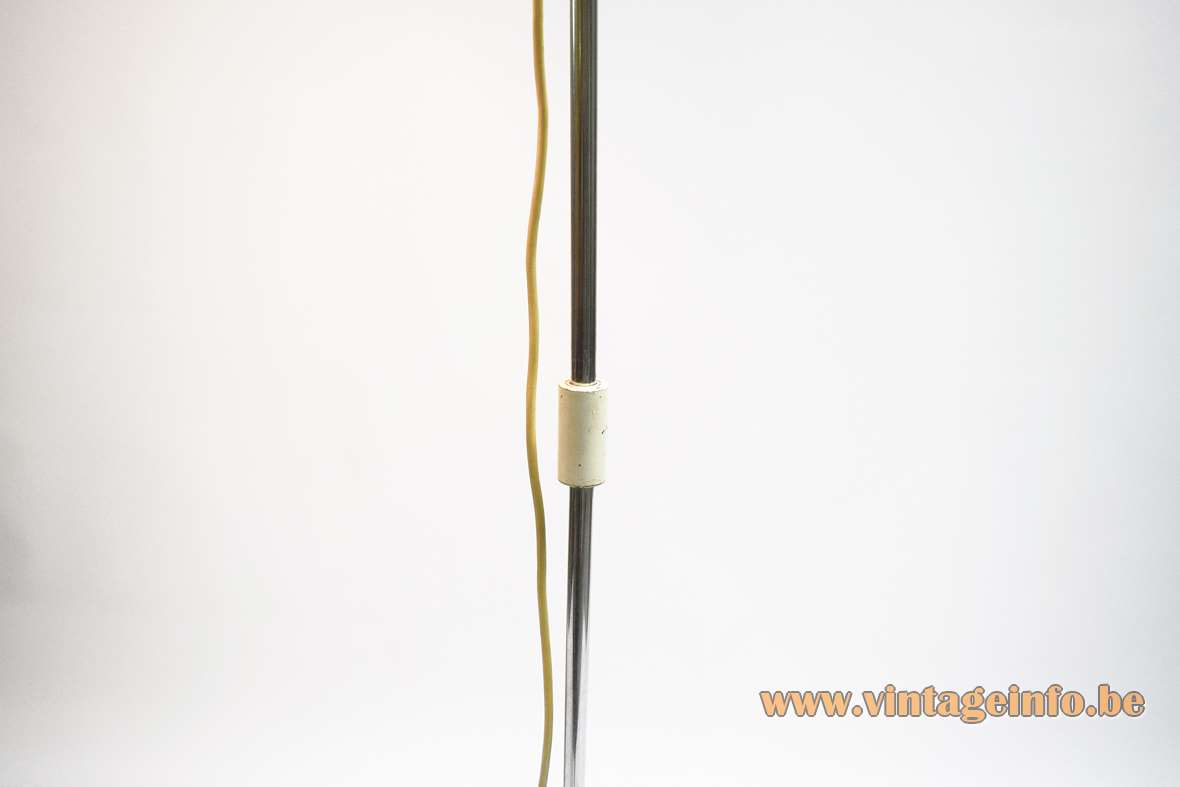 A brass Solken Leuchten floor lamp was used as a prop in the 2008 British TV series Wallander. Here in season 1, episode 1. Starring Kenneth Branagh, Sarah Smart and Tom Hiddleston. Many other lamps appear in this series. 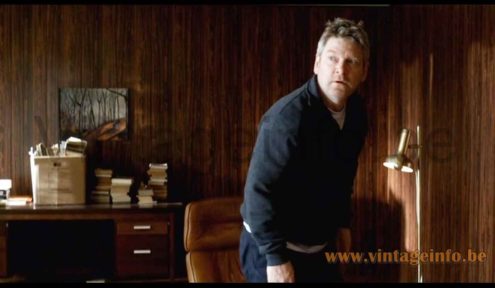 First of all, the Koch & Lowy OMI story is a HOAX!

Other versions: This floor lamp exists as a double light floor lamp. The lampshade is used for several other lamps, among which a wall lamp. The design changed a bit over the years. In the 1970s they made a more elegant base. Made in many colours and in brass and chrome.

These floor lamps were produced for many years and were probably the biggest success for Solken-Leuchten. Many other European companies sold these lamps.

When you do a search on the internet for the OMI mark on the chromed knee joint, you always find lamps that are described as lights designed by Koch & Lowy for OMI. Koch & Lowy is not a design team, but an American light company and has got nothing to do with this lamp. Today Koch & Lowy is owned by Chapman Manufacturing Company, Inc. from Avon, Massachusetts. Koch & Lowy used OMI joints for some lamps they produced and stamped their name next to the OMI logo, hence the confusion.

Some say OMI Switzerland, but there is nothing to be found about a Swiss company with that name. Others say OMI DBGM, because sometimes it is written on the knee joint.

Josef Sölken GmbH & Co. KG Leuchtenfabrik was founded in january 1950 as a family business. Over the years they produced and sold many lamps. Many of them were also sold by Massive from Belgium. The company Sölken was declared bankrupt in 2001, it had been in trouble for some time. Sölken-Leuchten was a client of OMI and used OMI parts for most of their lamps with some joints in it.