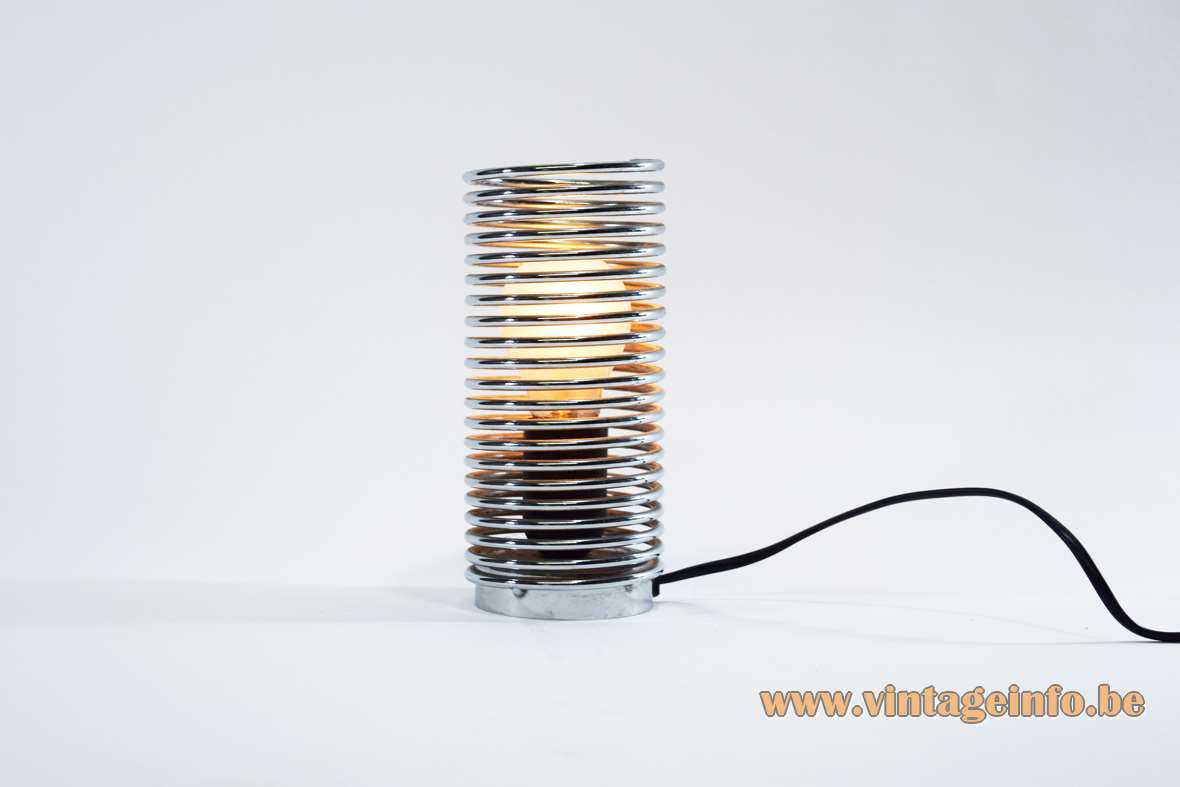 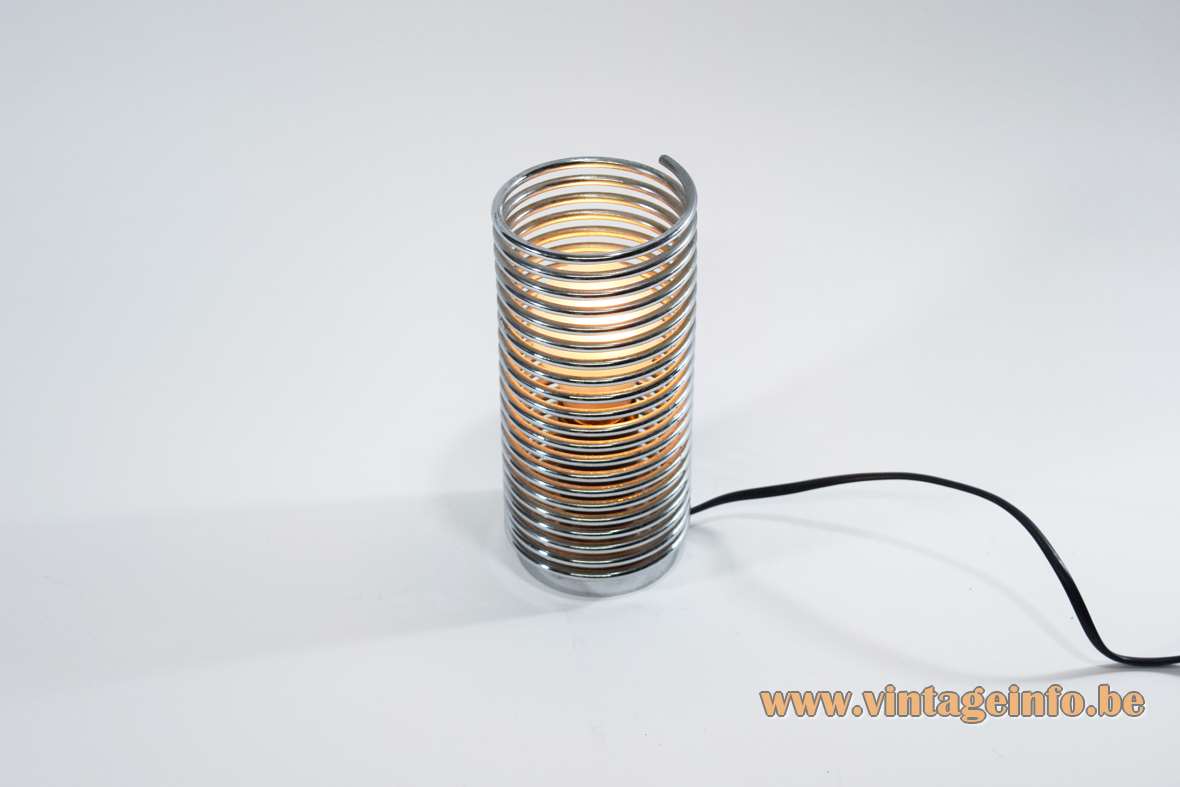 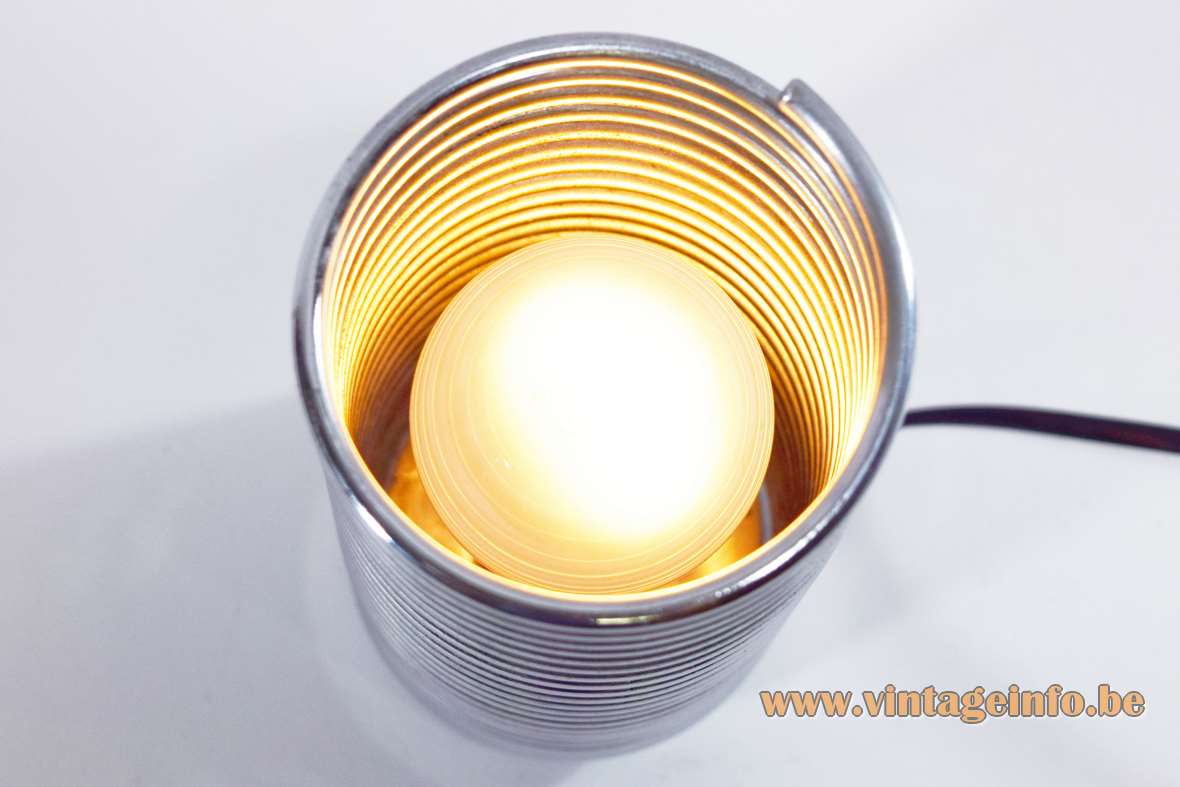 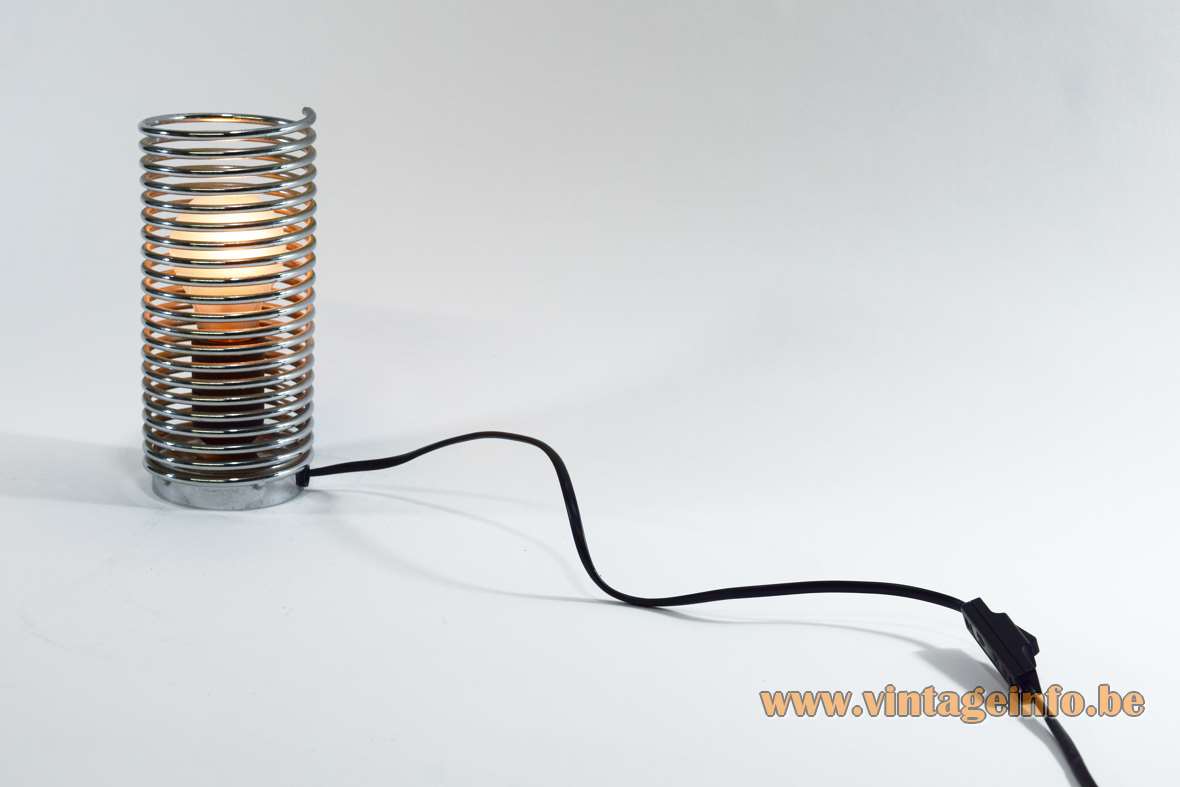 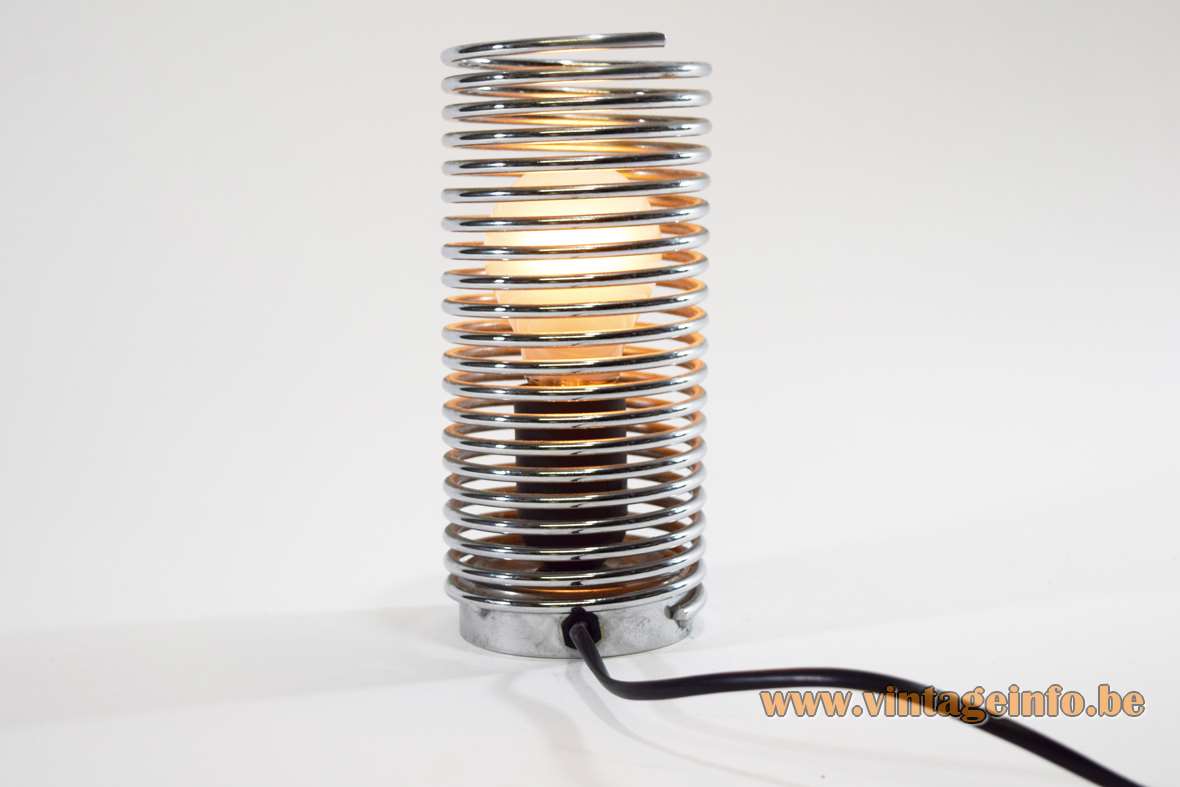 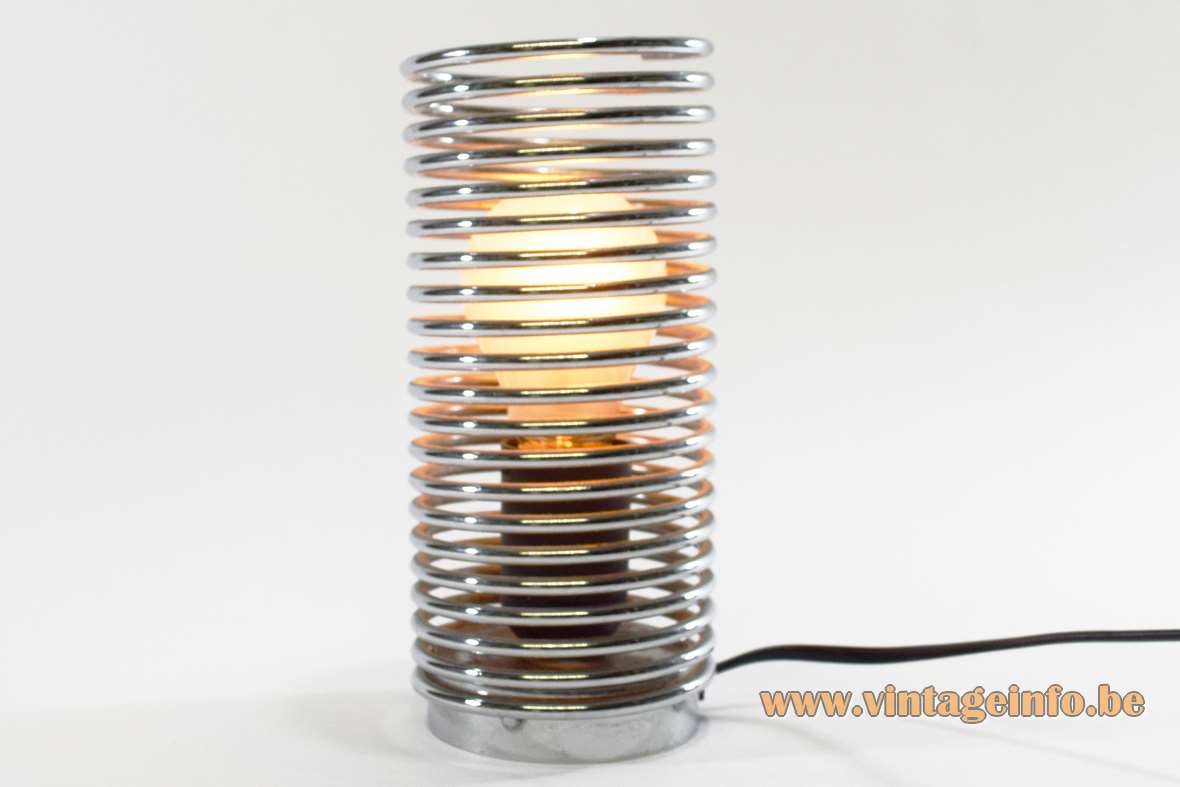 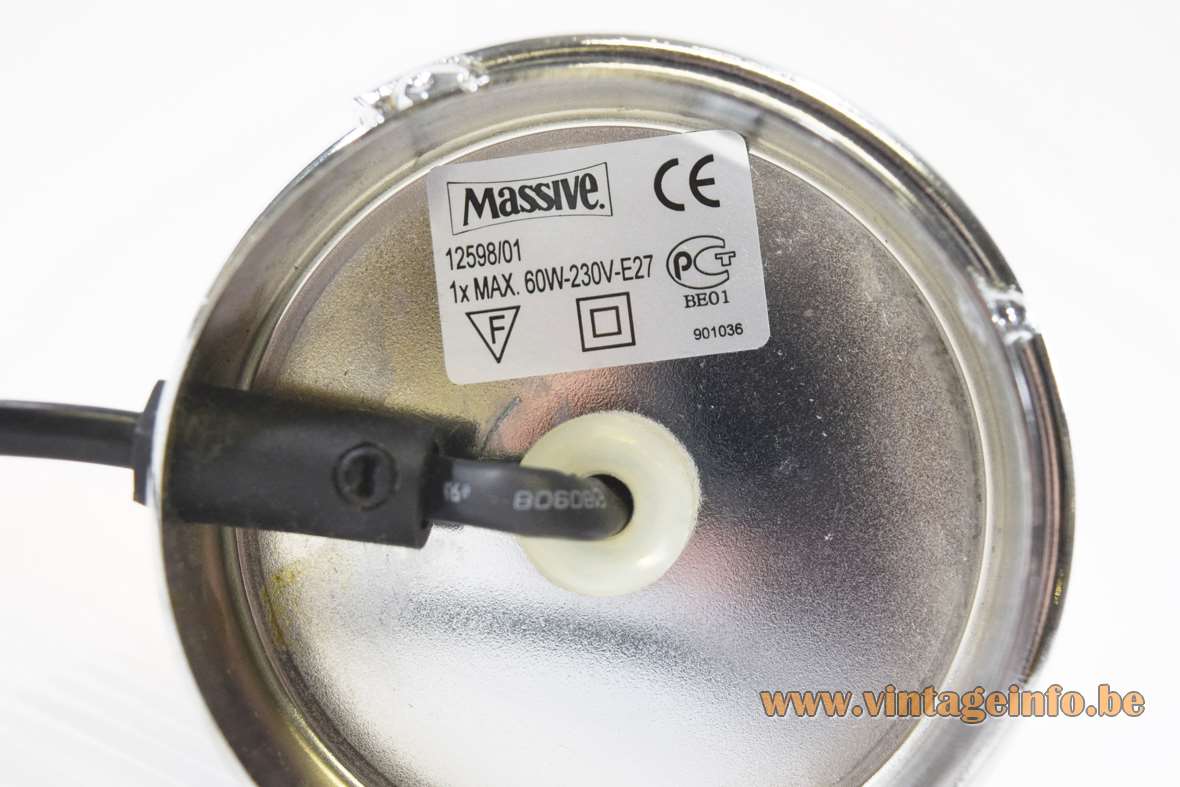 The Ingo Maurer lamp appears in the French film Paris N’Existe Pas from 1969 with Serge Gainsbourg, Richard Leduc and Danièle Gaubert. Gainsbourg also wrote the music for this movie. 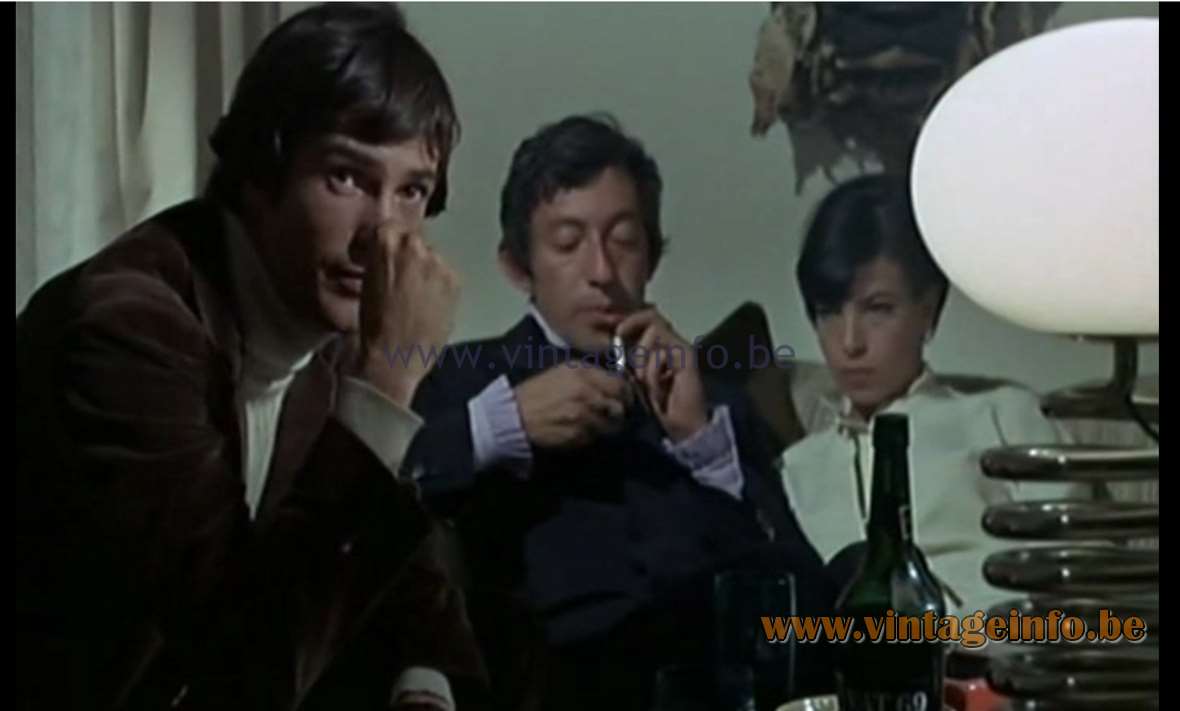 Other versions: The Massive lighting company produced this chrome spiral spring table lamp for a very long time. At least since the 1980s until the early 2000s. Early editions have a Bakelite socket. Later versions, such as this one have a plastic socket.

Many companies produced spiral lamps. The first one and at least one of the most famous lamps is the lamp designed by Ingo Maurer (1932 – 2019) and produced by his company M-Design. Often said that it is a lamp from the 1970s, but it was designed and produced for the first time in the late 1960s.

In 1971 Heinz Brenker (pseudonym used by Studio Tecnico Interno Harvey Guzzini from 1958 until 1974) designed a spiral table lamp named Jo-Jo for Harvey Guzzini. It was in production from 1972 until 1974 and it has more similarities with this lamp than with the Ingo Maurer lamp with the glass globe. This table lamp by Massive is often sold as the Jo-Jo lamp: beware!

Other producers that made this type of lamps in the 1970s are, amongst others:
Elco Lite, Woja, Luciano Frigerio, Sciolari Illuminazione, Lumi, Targetti, Laurel, Sonneman, Bonomi Form, Inter Néo and so on.

The Massive lighting company was in origin a bronze foundry and they produced mainly candlesticks, crucifixes and chandeliers in Wilrijk near Antwerp, Belgium. The company was founded in 1926 by Pieter-Jozef De Jaeck. His son Eddy De Jaeck was responsible for the huge expansion of the company in the 1970s. But it were his sons, Piet and Jan De Jaeck who made Massive a true multinational. Thus, they moved production to Eastern Europe and China.

When the takeover by Philips was announced in November 2006 Massive commercialized more than 10.000 lighting products under brand names such as Massive, TRIO Leuchten and Lirio. The group had about 5.000 employees worldwide and was active in 70 countries.

The electric parts are Italian and made by VLM Components from Buccanisco, near Milan. The company is famous for the switches they produced designed by Achille Castiglioni.