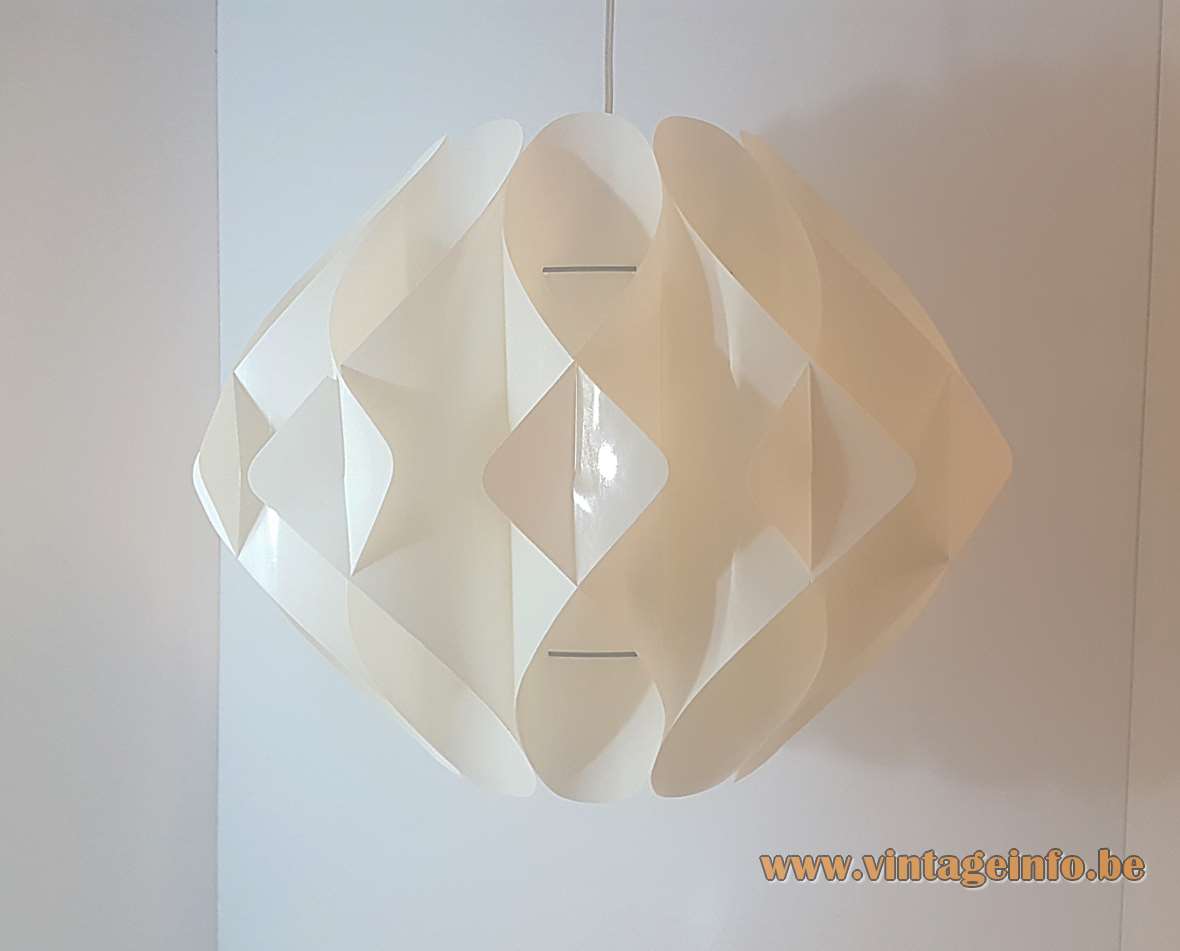 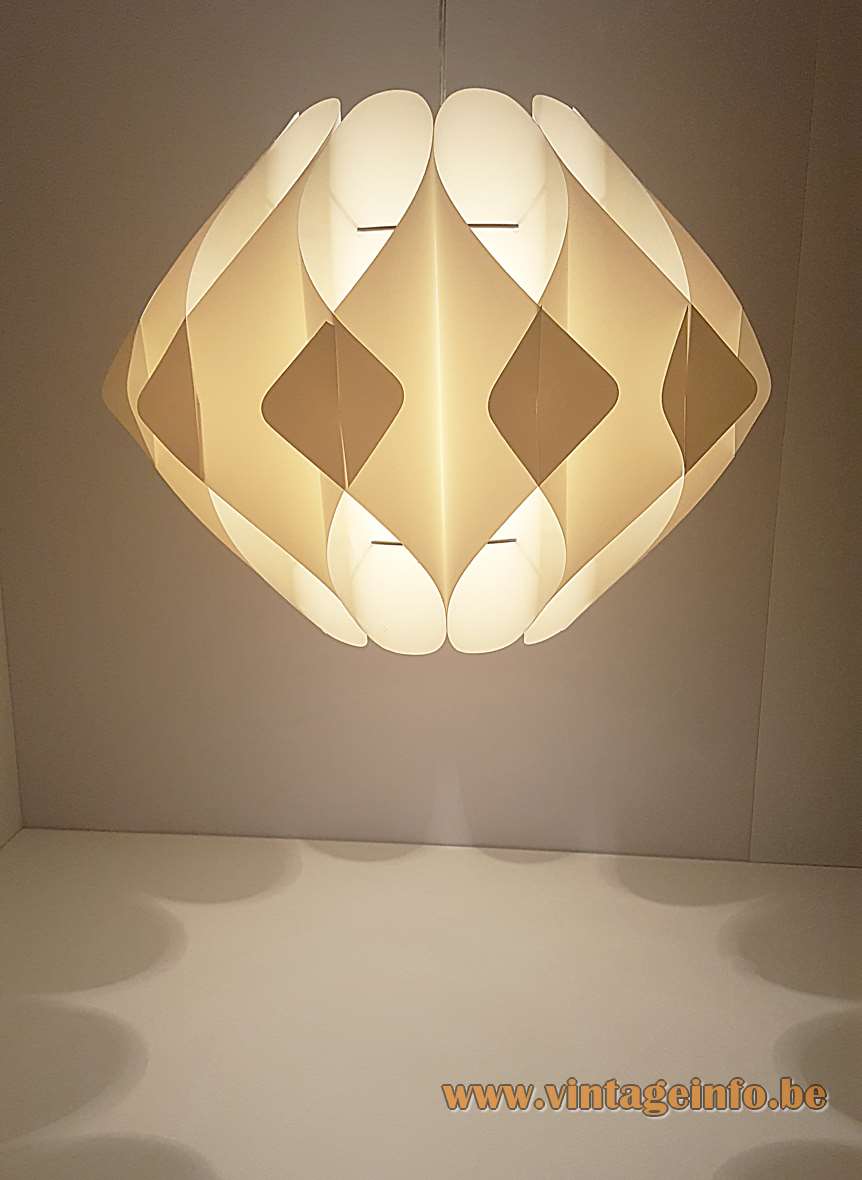 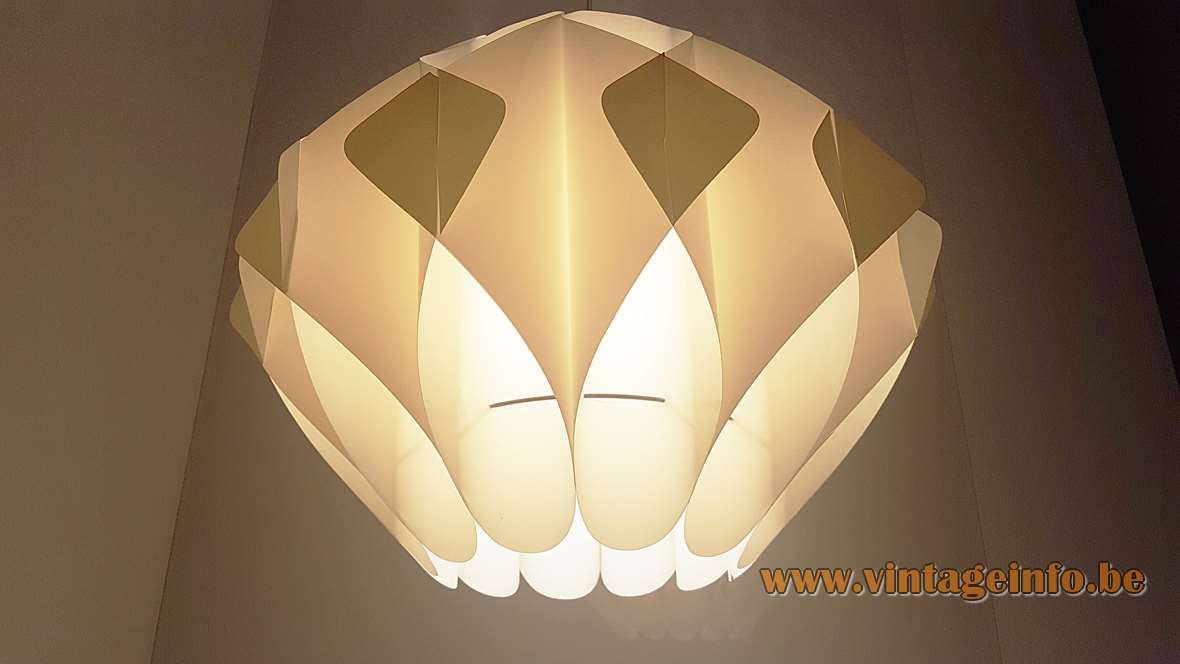 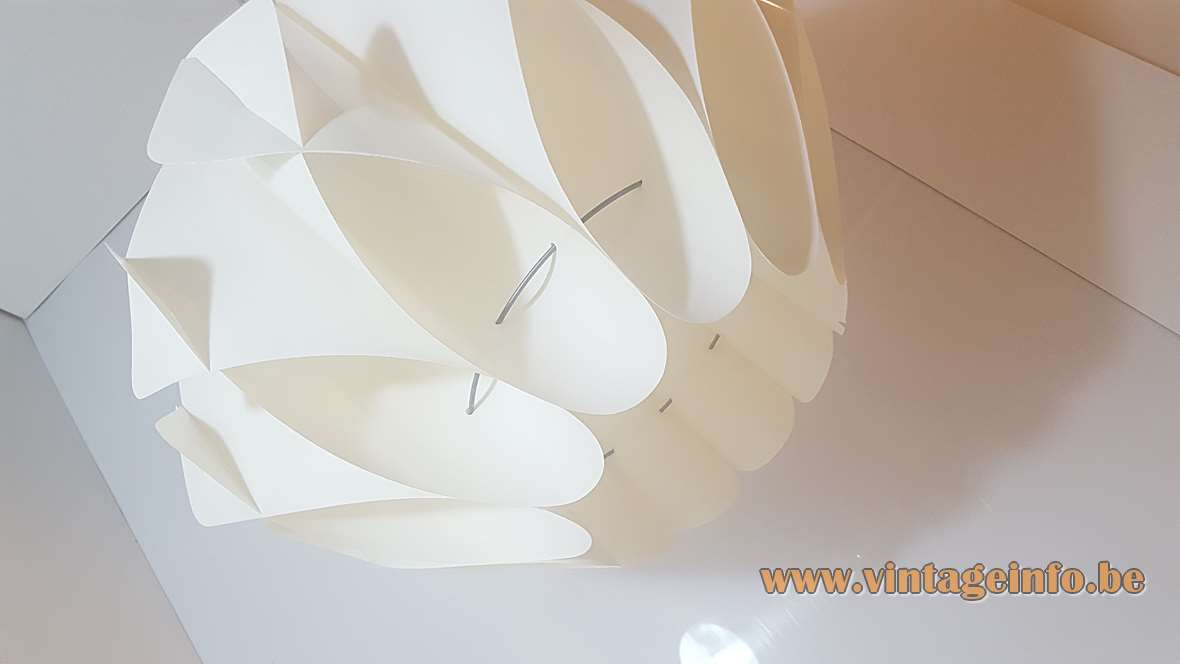 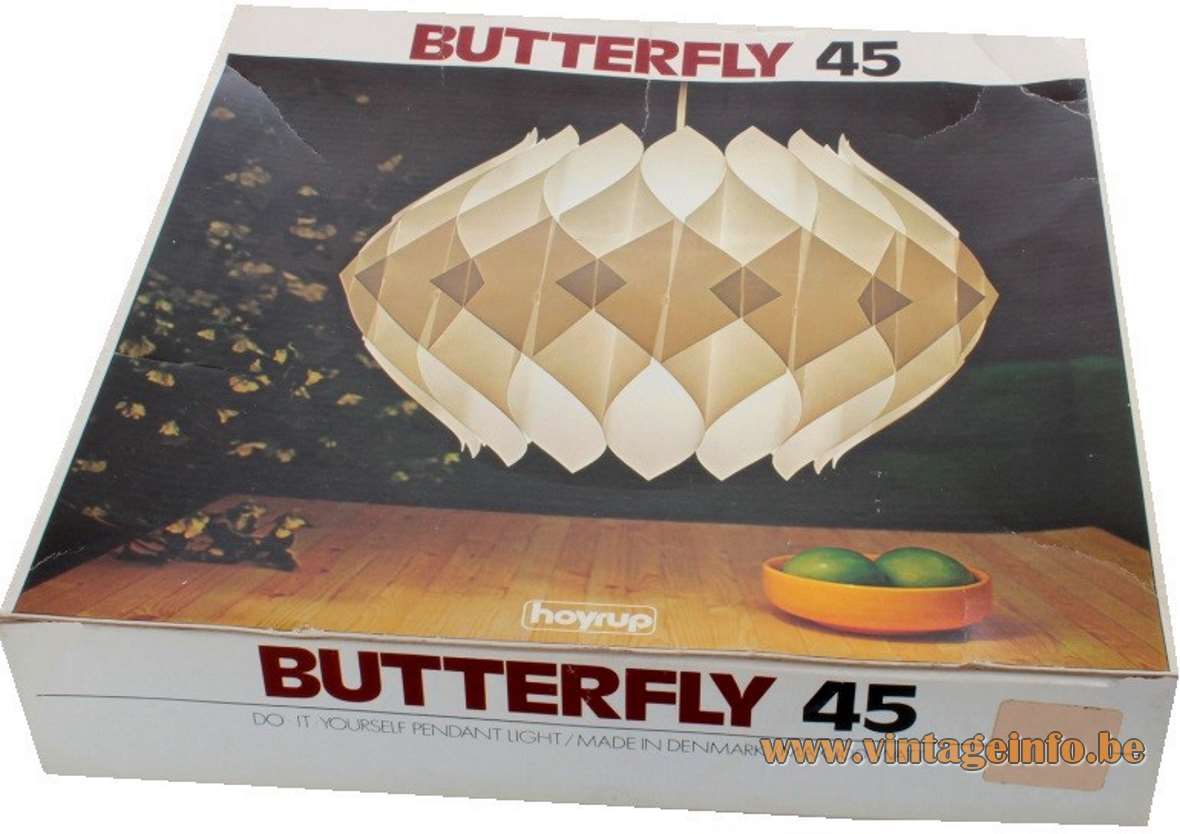 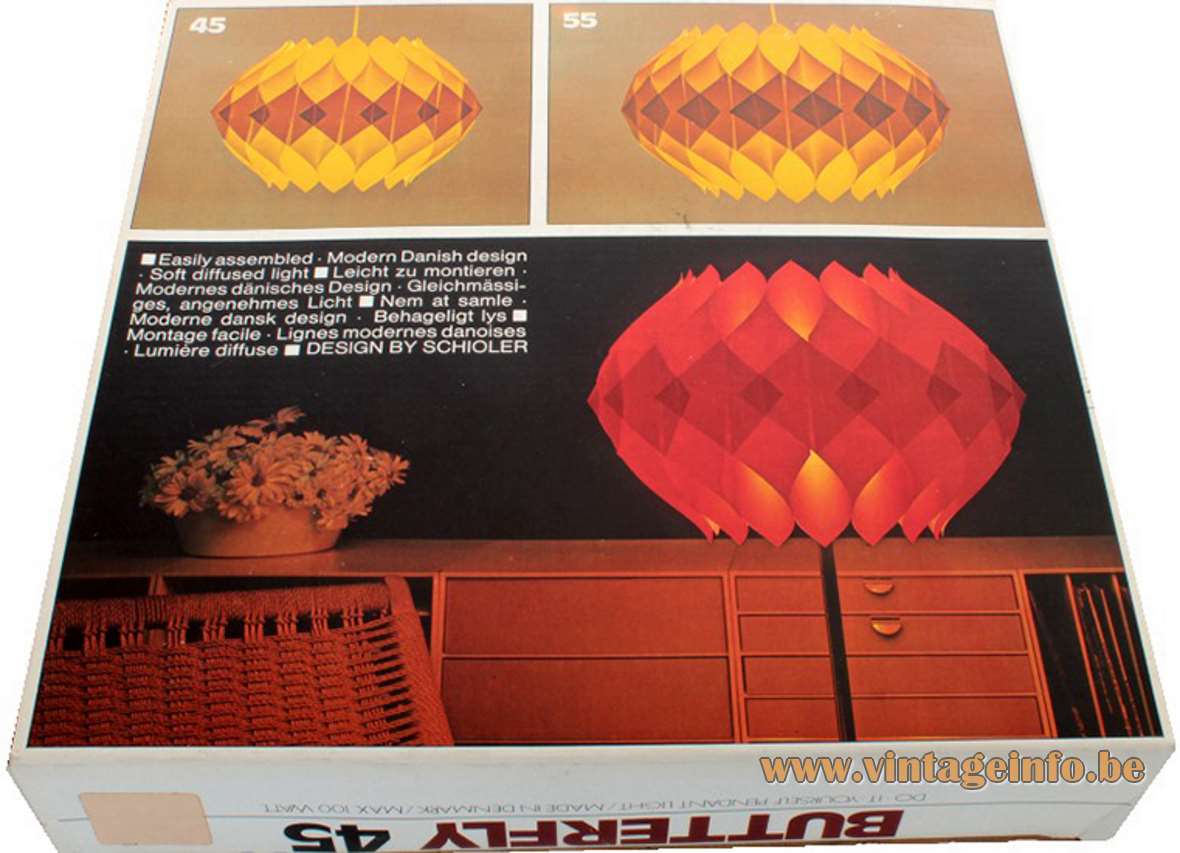 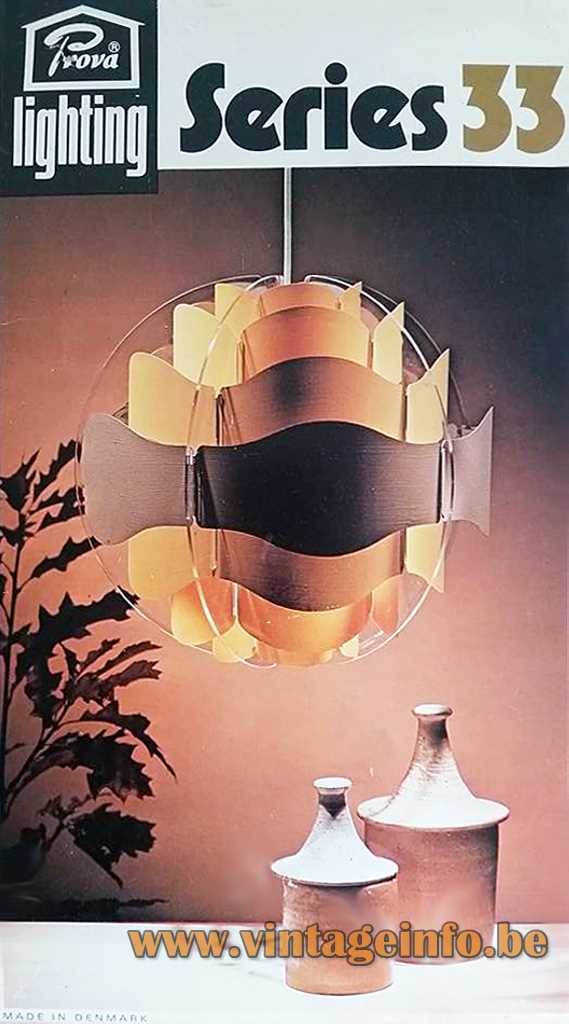 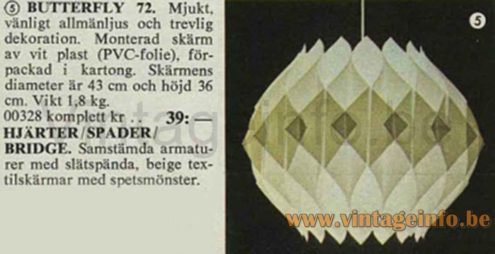 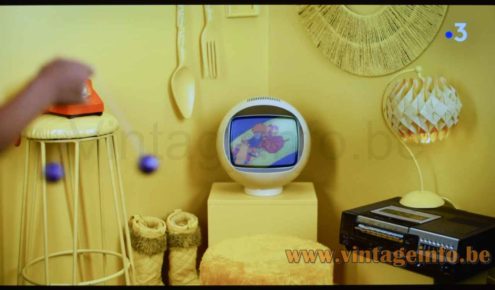 Other Versions: Made in many variations and colours.

This Butterfly style pendant lamp is made after a 1968 design by Lars Eiler Schiøler (1913-1982). The 2 boxes you see are from the original lamps. The original lamps don’t have the metal wire ring on top and below through the plastic, but they are inside the lampshade. Later it became a plastic grill.

At least sold by Woja, Zicoli (Germany), BHS and Argos (UK), but in all probability also sold by other companies.

This Butterfly style pendant lamp was sold by the Dutch company Woja. Woja gave them women’s names such as Iris and Mira. The maker remains unknown. The Woja company no longer exists. Woja is best known for the series of spring lamps with a globe on top, made after a design by Ingo Maurer from Germany. It was their biggest succes.

Prova was a house label for British Home Stores (BHS). Not only lamps exist with this label, also clothing. Prova was not a lamp producer, they sold lamps made by others. The maker of this lamp remains unknown, according to the box of Prova it was made in Britain. This lamp is Series 1, but also a Series 33 exists.  A very similar DIY pendant lamp, but made in Denmark…

This pendant lamp was acquired in The Netherlands, so another company sold it. Do you have an idea about the producer? Please let us know through the contact form and help improve the websites exactitude. Your help is much appreciated.

The Hoyrup company was founded in Christianshavn, Copenhagen, Denmark by Preben Johan Høyrup in the late 1940’s. In 1968 Lars Eiler Schiøler became minority shareholder. Lars Schiøler designed almost the complete collection from the 50s until the 70s for the company.

Hoyrup created a wide range of stylish modern Danish lights, that were easily-assembled and therefore easy to ship around the world to more than 40 countries. In 1978 the company was split and sold, it became HoyrupLight. It ended business in the mid 80’s. Their famous lamps are copied by many companies.

The Swedish company IKEA sold the Butterfly 72, made by Hoyrup. It appears in the 1974 catalogue, as you can see. 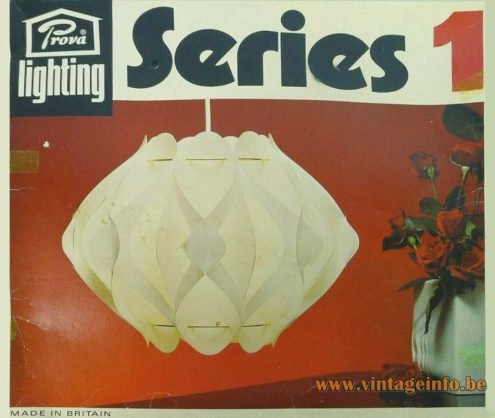 Another fake Butterfly lamp, but fabricated as lampshade on a wooden floor lamp was used as a prop in the 2017 film The Hitman’s Bodyguard. A comedy about a bodyguard who protects a hitman. The title immediately tells the whole story. Starring Ryan Reynolds as Michael Bryce the bodyguard and Samuel L. Jackson as Darius Kincaid the hitman.

Many thanks to Uffe Schiøler for the enlightening information and many thanks to Marjan from Vintage Drachten for the beautiful pictures and the enthusiasm. Many thanks to Benjamin for the photo of the Prova box.