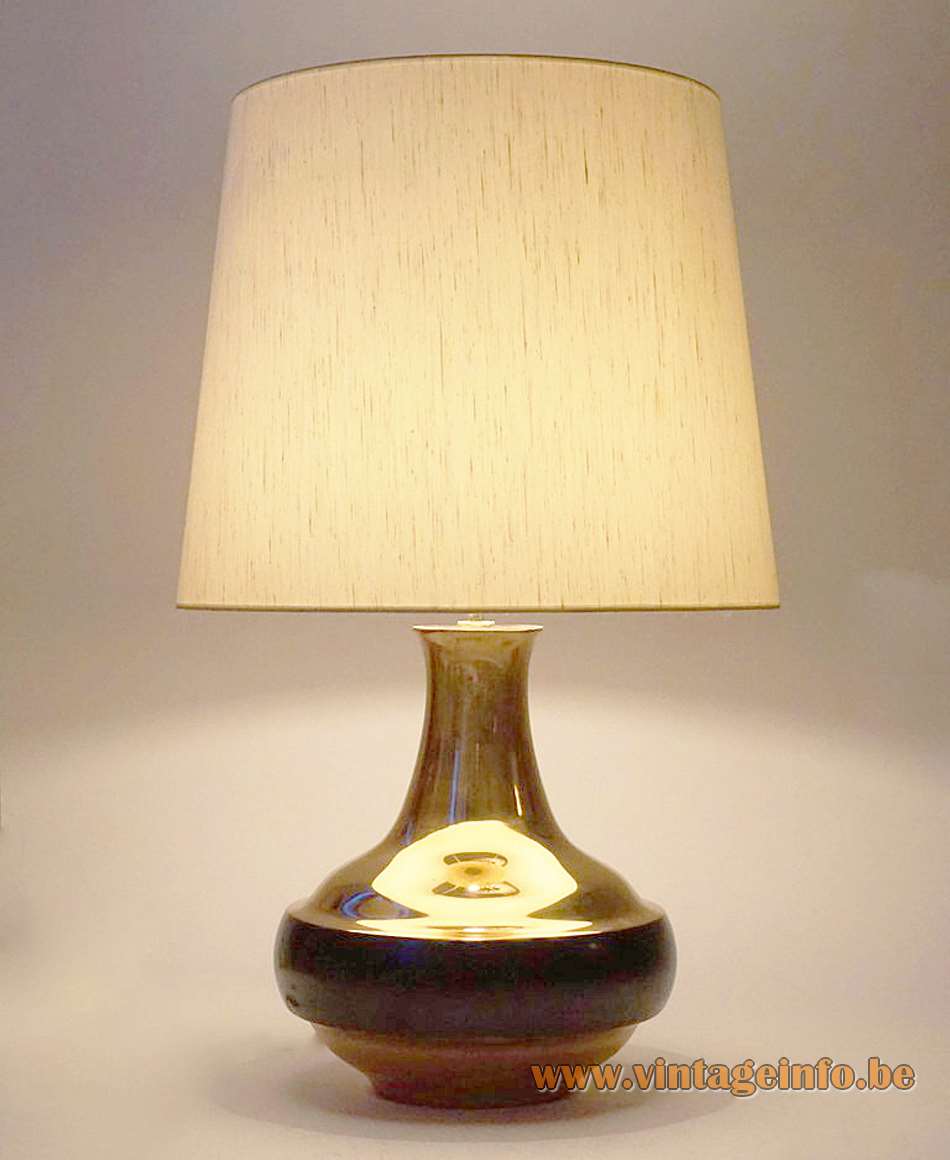 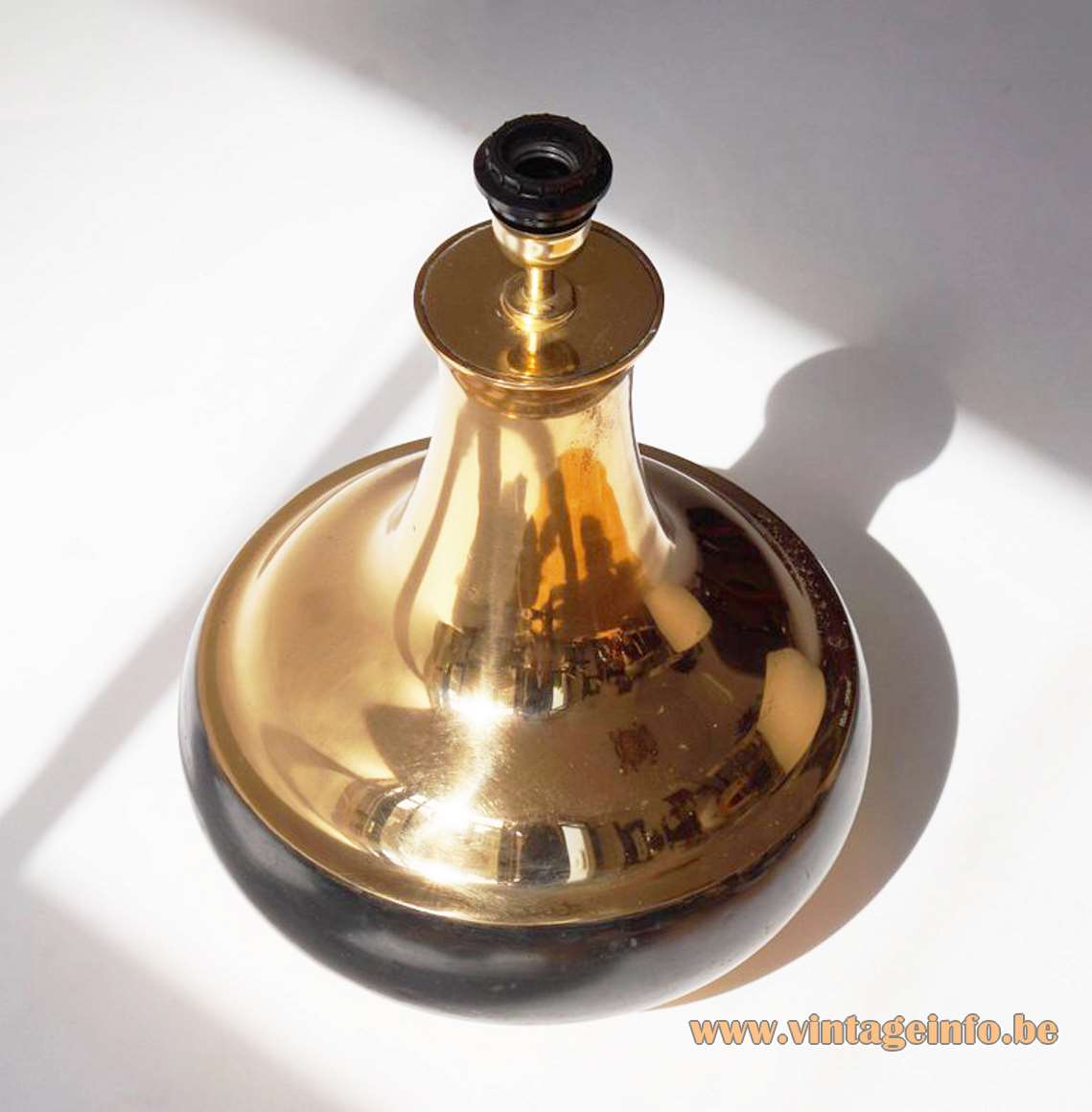 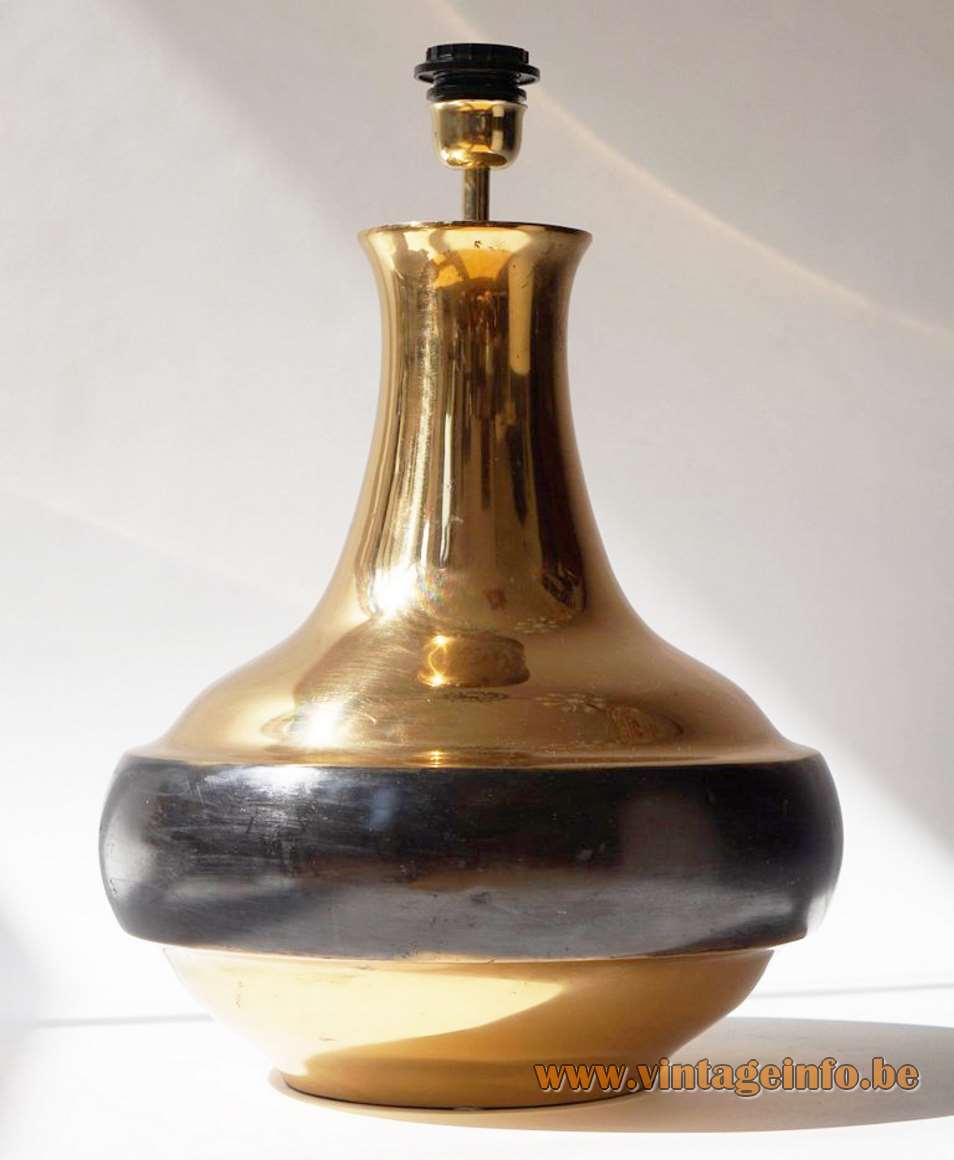 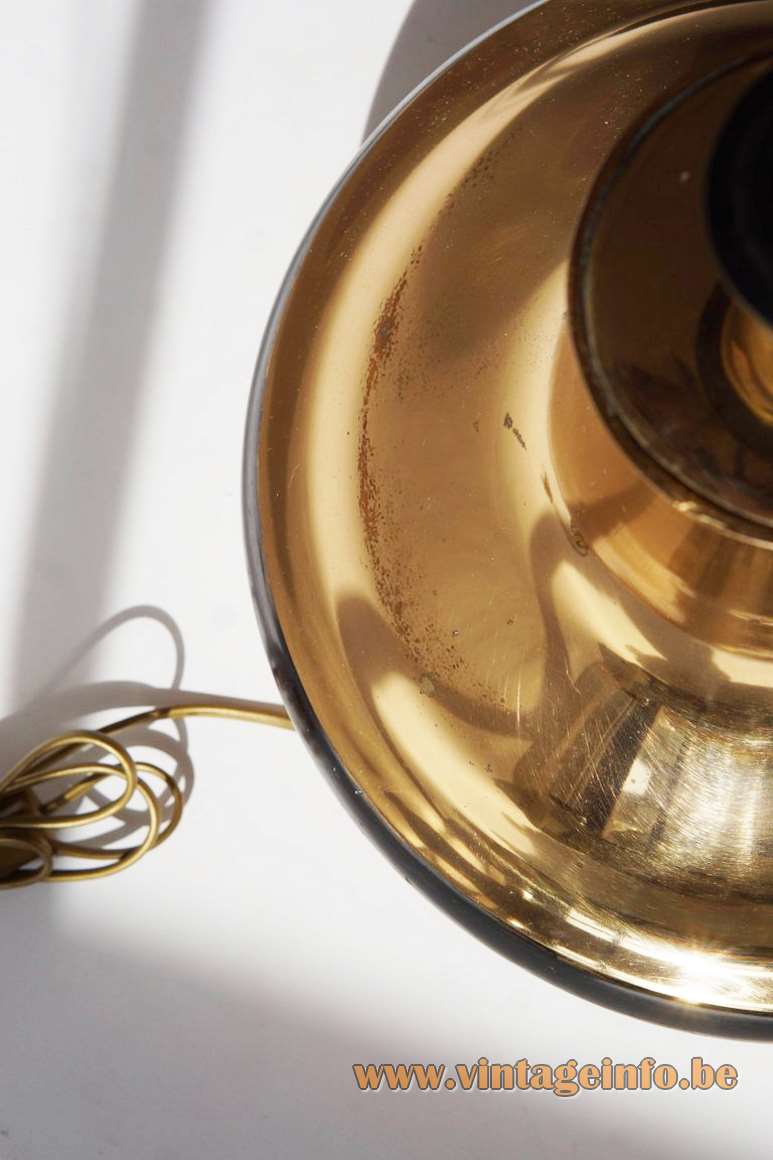 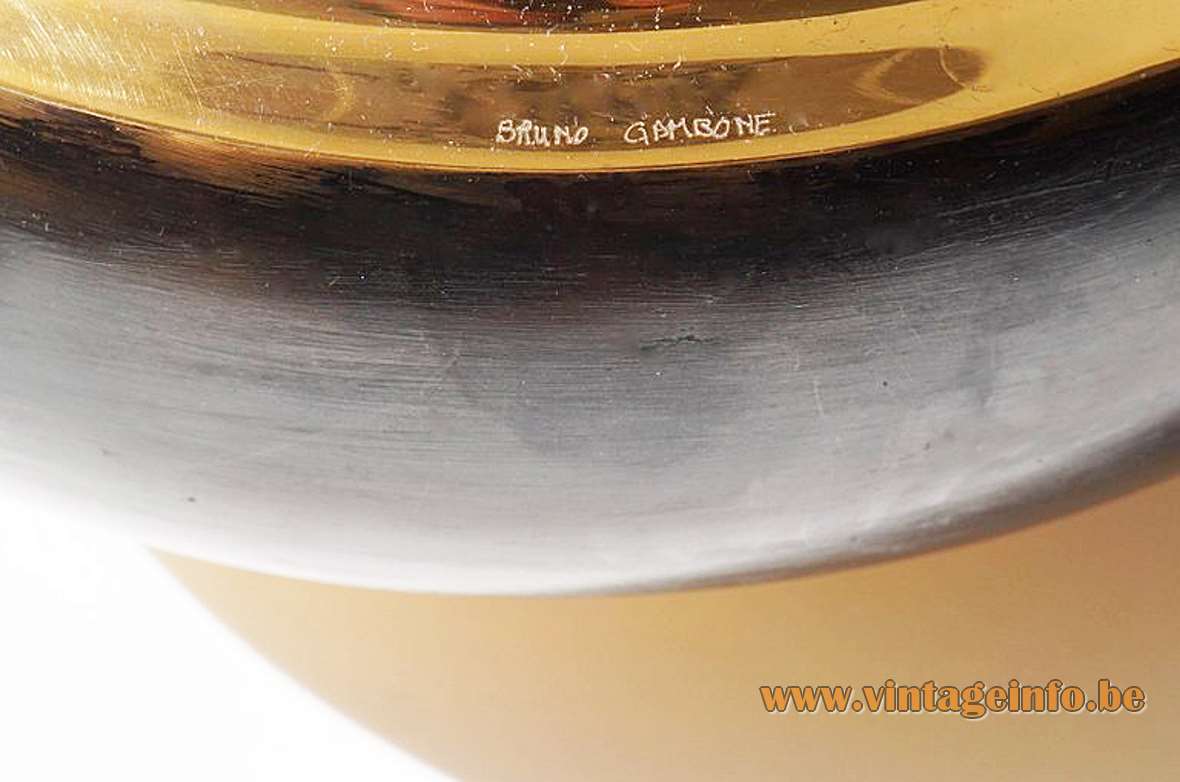 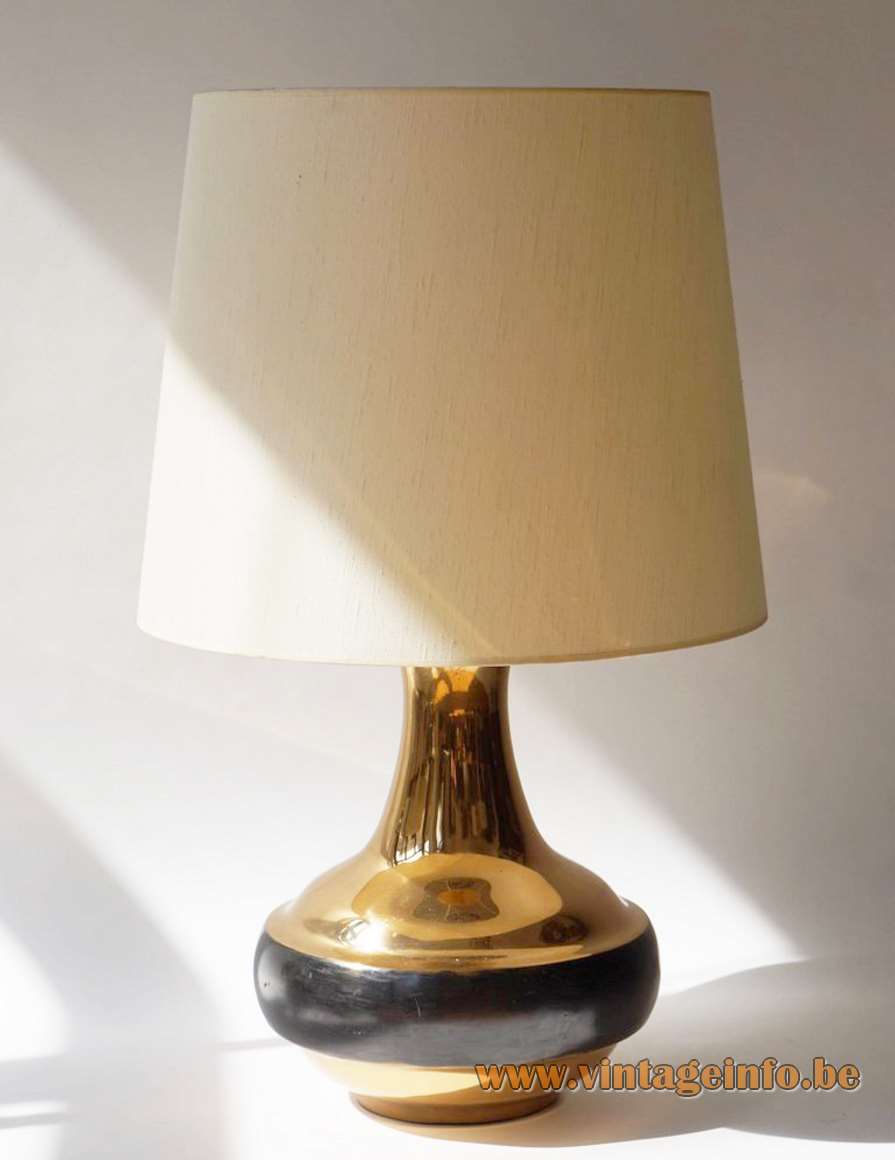 Materials: Round brass base with a black ring in the middle. Conical round beige fabric lampshade. Bakelite E27 socket.

Other versions: This Bruno Gambone brass table lamp was made in several sizes.  The design of this table lamp is also reflected in the lamps that he has made in ceramics.

Bruno Gambone was born in 1936 in Vietri sul Mare (Vietri on the Sea), a town and commune in the province of Salerno, in the Campania region of southern Italy.

At the age of 14 he began to have his first contacts with ceramics in the workshop of his father Guido in Florence. He had a well known pottery and majolica factory named “La Tirrena“.

In 1963 Bruno moved to the USA where he was engaged in painting, sculpture, theatre and cinema. He frequented artists such as Andy Warhol, Robert Rauschenberg and Roy Lichtenstein.

In 1968 he returned to Italy and settled in Milan. A year later, in 1969 he returned to dealing with the ceramics sector after his father Guido died. Thus he moved back to Florence to run the family business.

He is a member of the Consiglio Nazionale della Ceramica (National Council of Ceramics in Italy). He was President of the “Associazione ASNART di C.N.A.” (Italian Trade Association of Artistic Craftsmen) for a decade, of which he is now the Honorary President. In 1997 he was appointed Artistic Director of the Italian Ceramic Awards of Vietri sul Mare, were he was born.

During the years Bruno Gambone tried out many other materials such as glass, iron, bronze and brass, of which this lamp is a beautiful example.

He once declared in an interview, “We are born from earth. We are born from it and go back to it when we die. And between birth and death, there is a story made of everyday earth.”