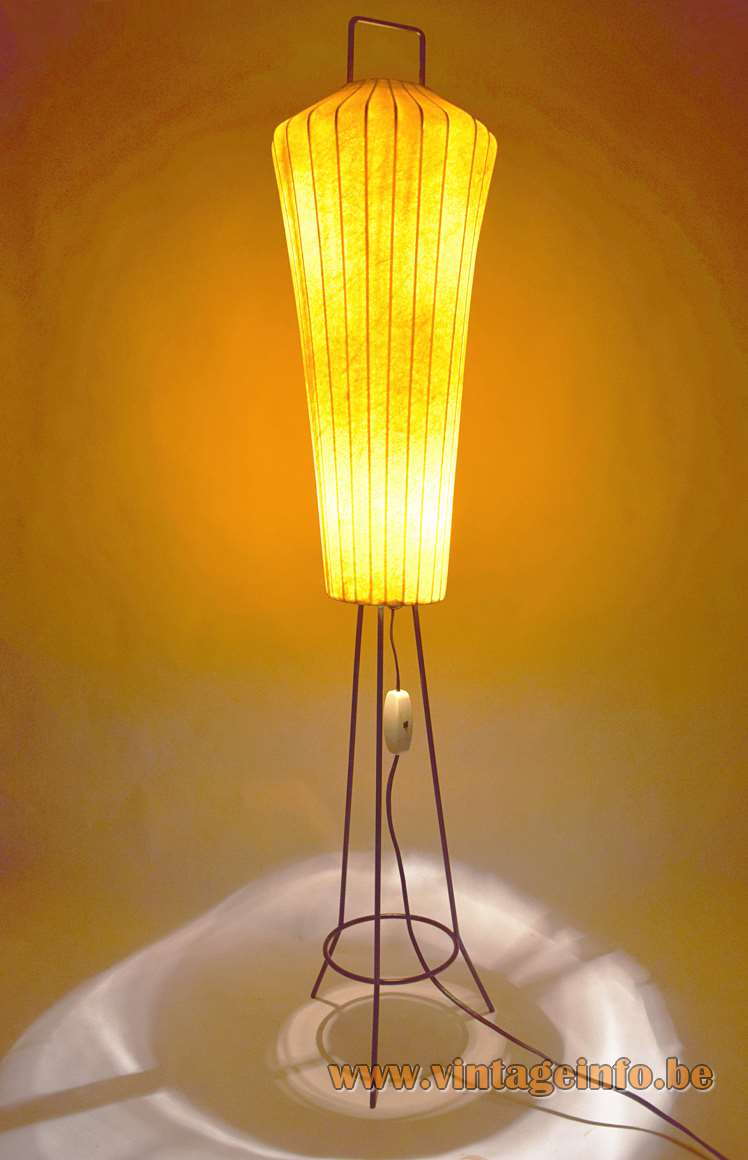 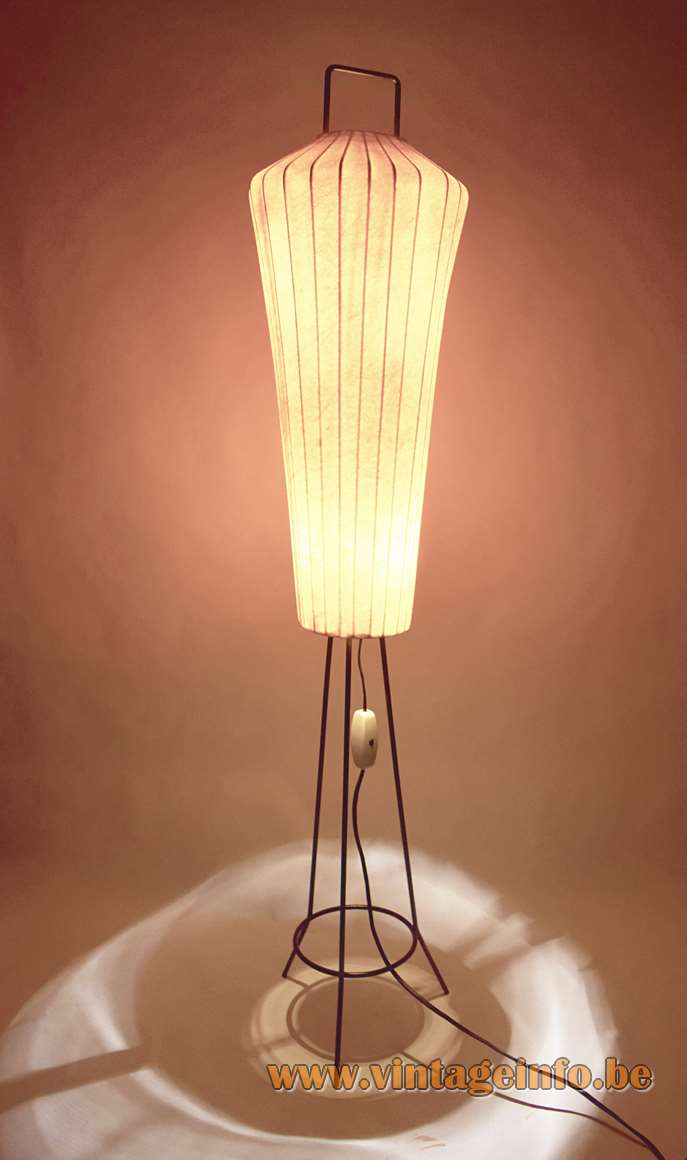 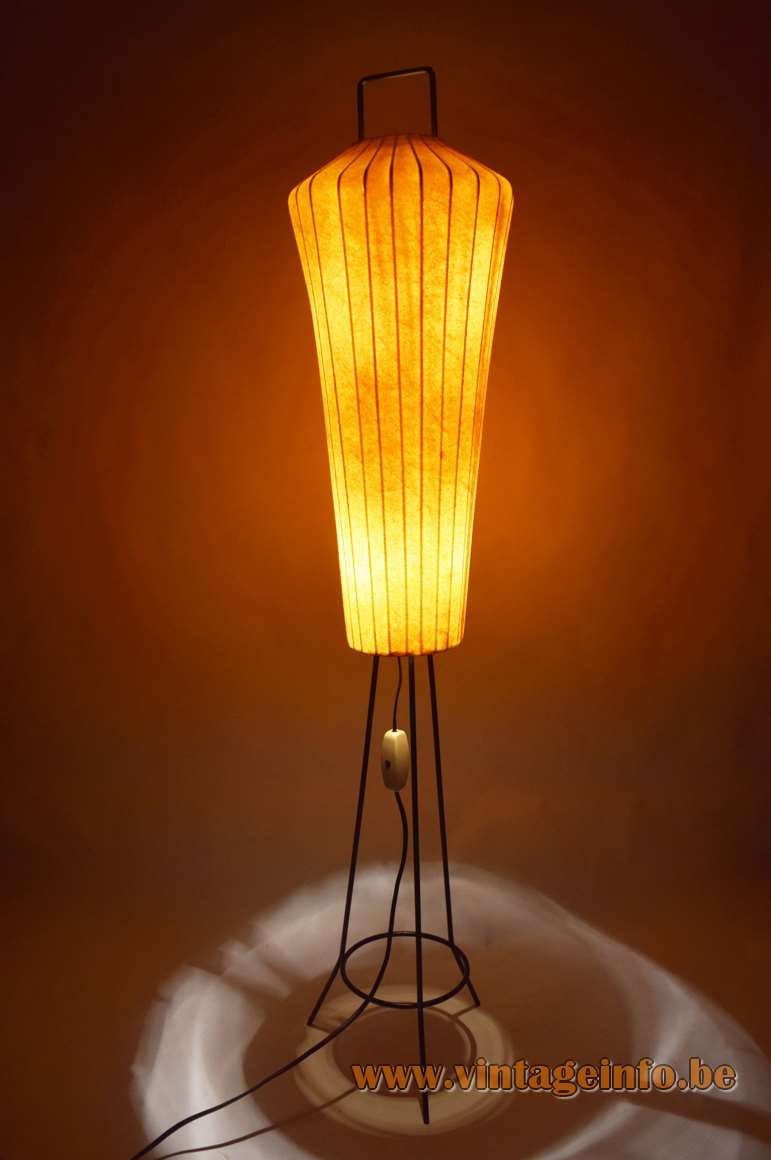 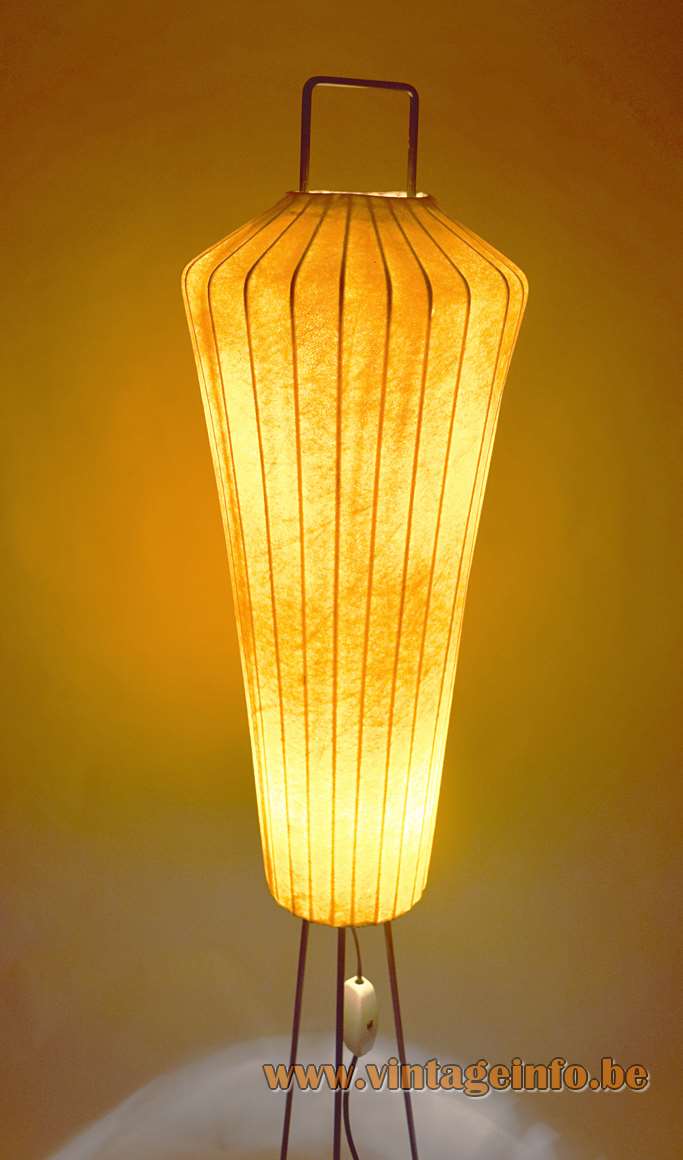 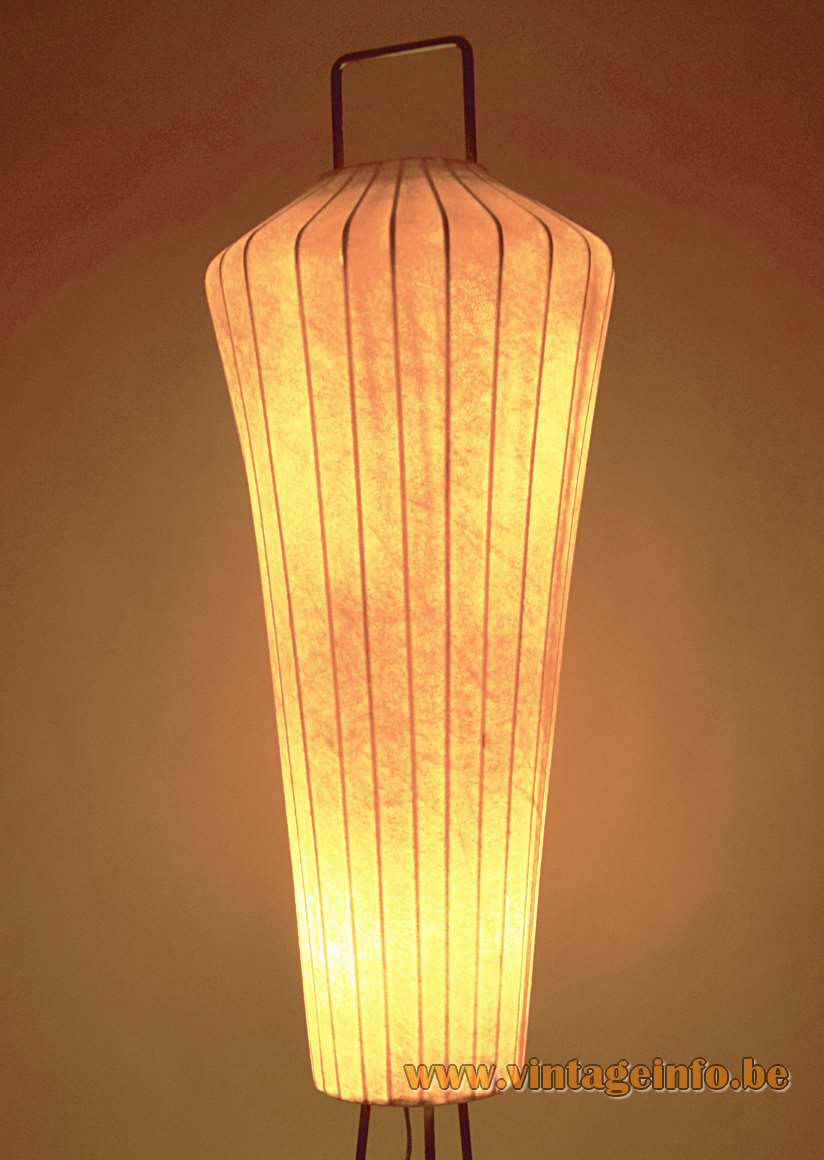 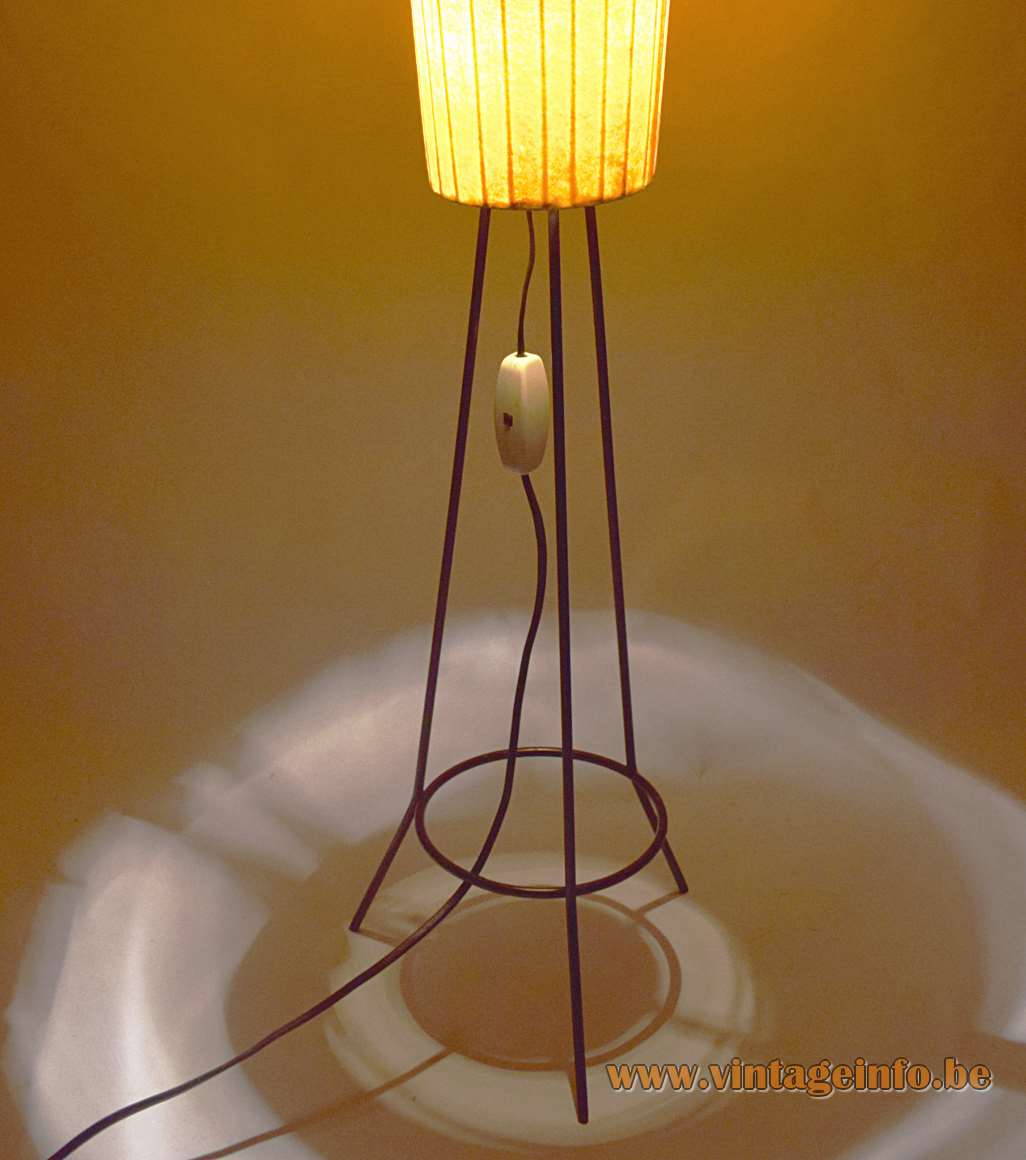 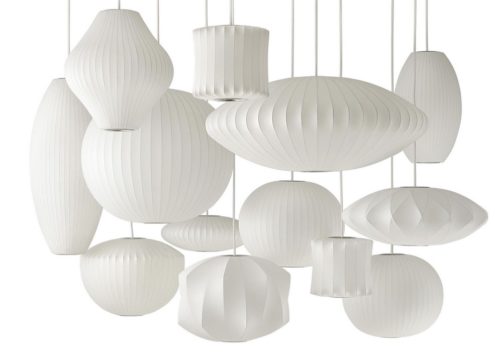 One of the most famous lamps created in Cocoon is the “Gatto” designed by Achille & Pier Giacomo Castiglioni in 1960. The lamp is still in production. More info on the Flos website.

In the late 1950s Arturo Eisenkeil brought the technique to Europe and together with Dino Gavina, Achille and Pier Giacomo Castiglioni, Sergio Biliotti, Carlo and Tobia Scarpa, Ignazio Gardella, to name the most important designers, the Flos company was born. 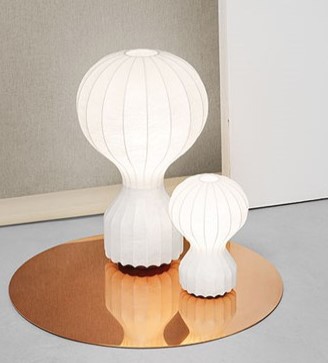 Materials: Tripod base made of a metal frame in black painted iron wire rods, with a handle on top. Elongated plastic Cocoon lampshade. 2 Bakelite E27 sockets.

Other versions: This Artimeta Lugano tripod cocoon floor lamp was made in several versions.

It is often suggested that the plastic used for these lamps was made of pig’s bladder, but that’s a hoax, of course.

Artimeta was founded by Floris H. Fiedeldij in 1960. Artimeta produced luxury lighting and furniture. Also French designer Mathieu Matégot created several items for Artimeta. Most products were sold in Germany. About 15 people worked for the company. Because Artimeta was booming, Fiedeldij was searching for investors.

Friedel Wauer who is credited by Flos for devising the technology of spraying this plastic material onto iron frames, was inspired by the “self-wrapping” of a silkworm, hence the naming “Cocoon”. More info about the company can be found here on Vintageinfo.

The first designer who used this kind of material is George Nelson in 1947 for his Bubble Hanging Lights. The technique had been developed for mothballing naval ships. George Nelson referred to these lights as “one of those happy accidents which occur all too infrequently in the designer’s experience”. 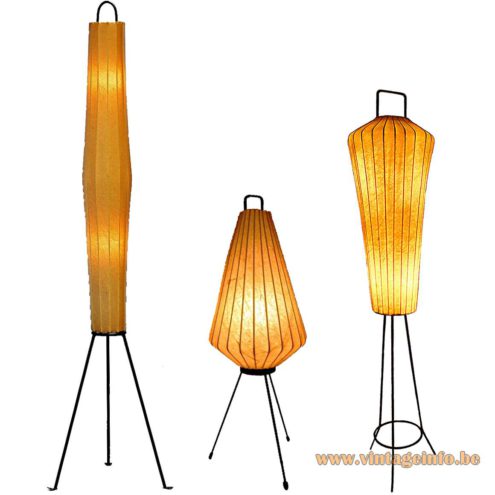 How these lamps are made by Eisenkeil for Flos, impressive video!