Other versions: This Aro Leuchte multicoloured discs chandelier was made in many variations. It was made with more or less discs, and with bigger or smaller frames. Made in many colours and many designs. All made of acrylic. Also chandeliers with clear and frosted discs exists.

Inspired, to say the least, by the famous crystal glass discs chandeliers that were produced on the Venetian island Murano in Italy in the 50s, 60s and 70s by several companies, but the most were made by AV Mazzega, after a design by Carlo Nason.

In Germany you sometimes find these lamps with a sticker inside the canopy of Bartmann, Berlin. It is not a label, only a shop who sold lighting made by Aro Leuchte. The Bartmann company still exists.

Acrylic: often named by its commercial name: Perspex, Plexiglas, Crylux, Acrylite, Lucite. It is a thermoplastic. 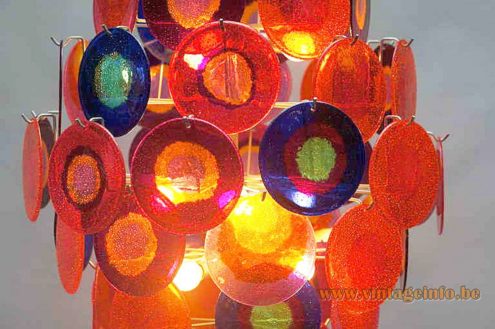