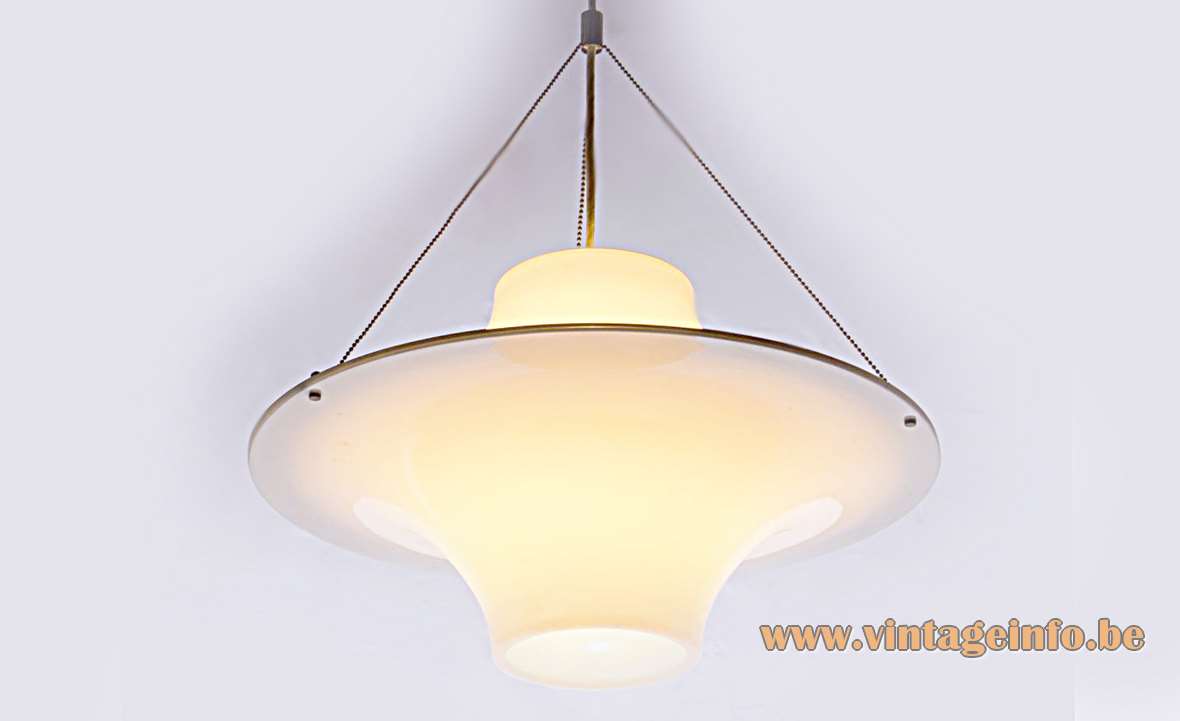 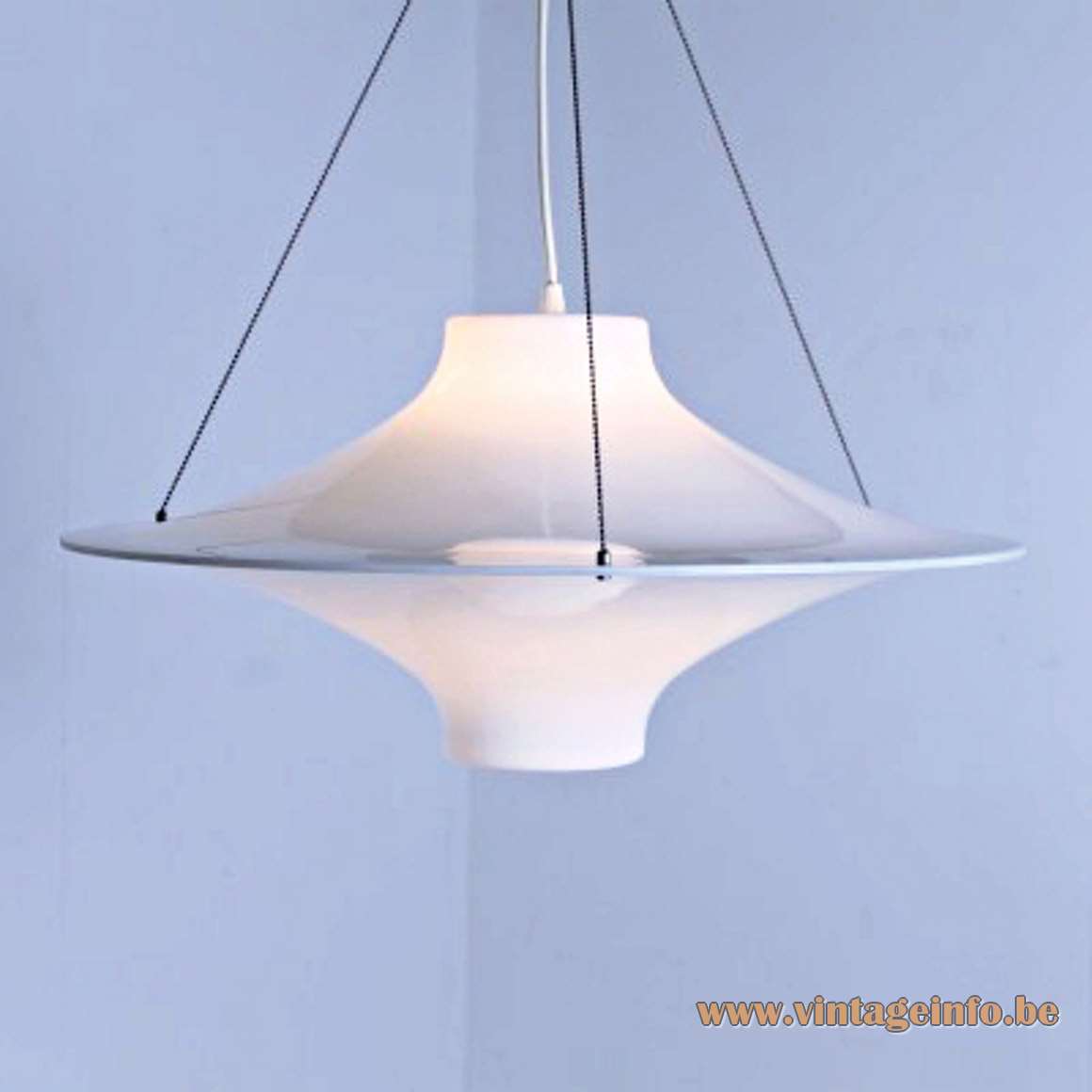 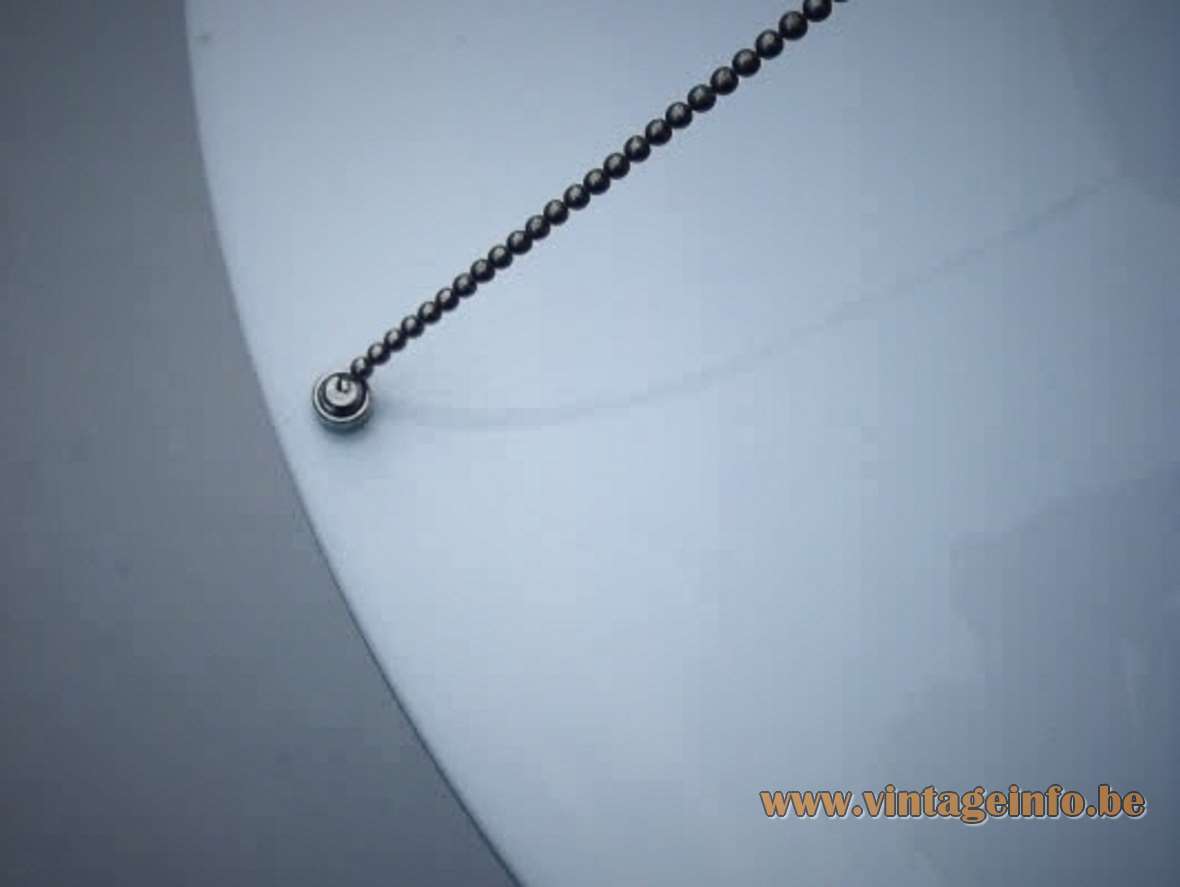 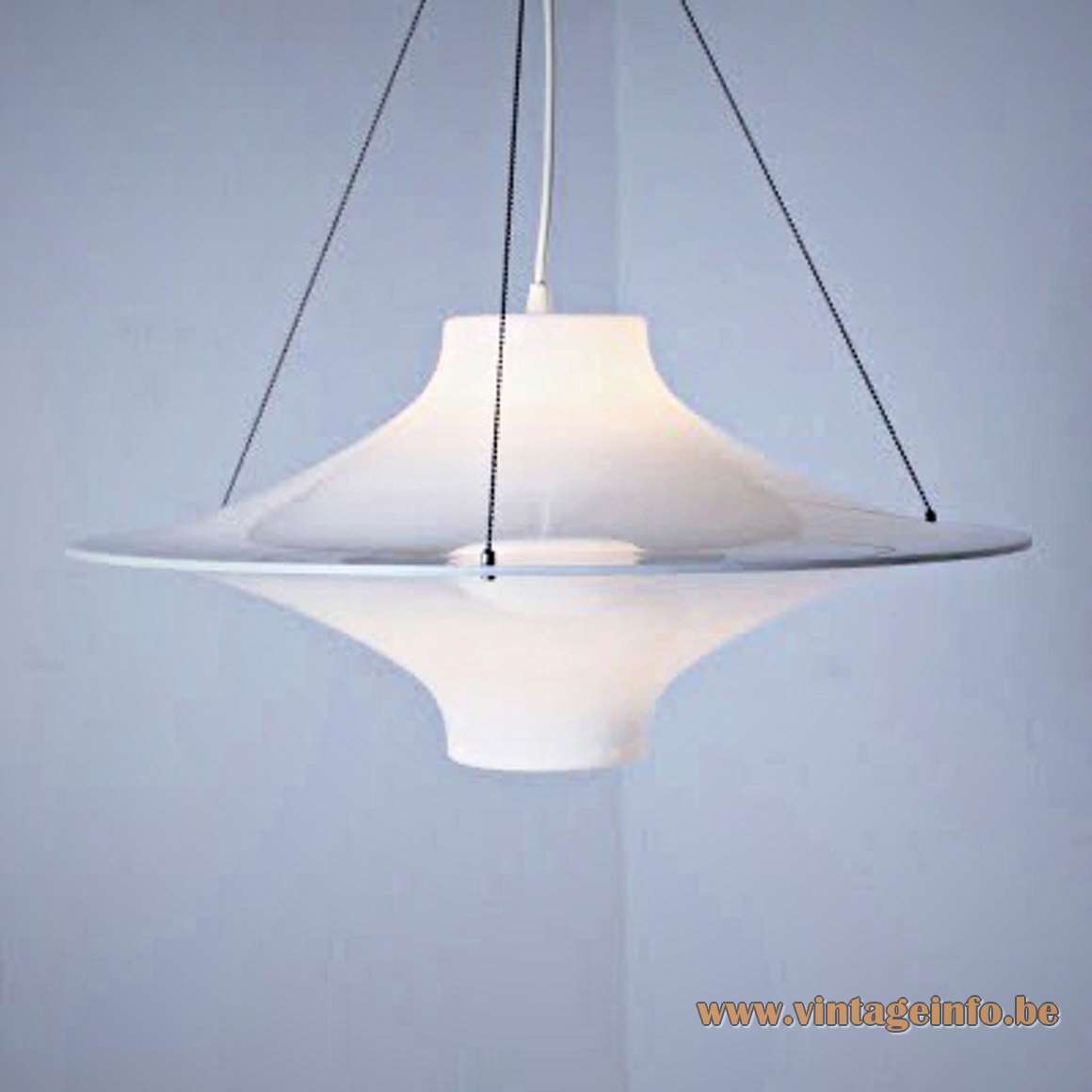 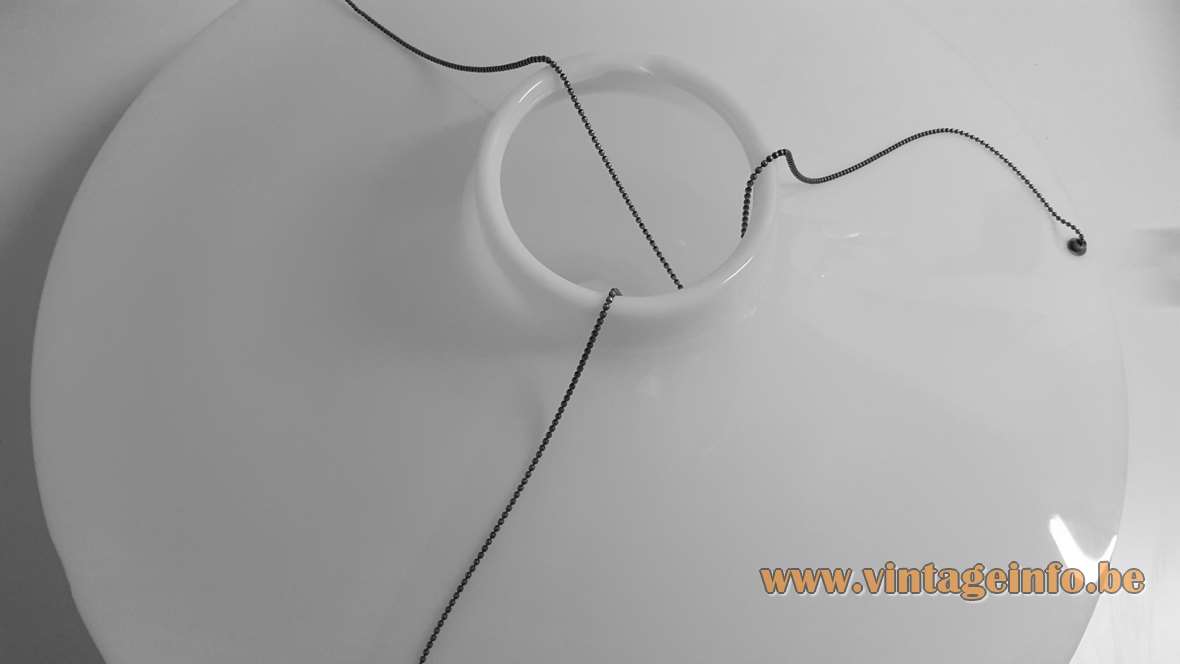 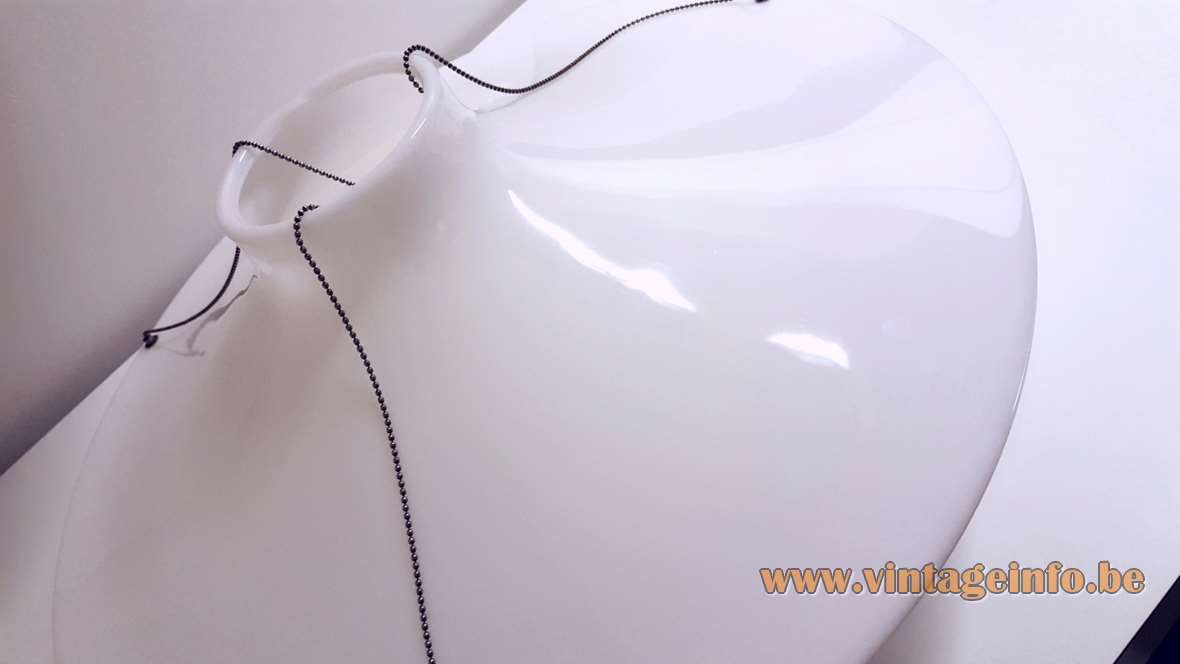 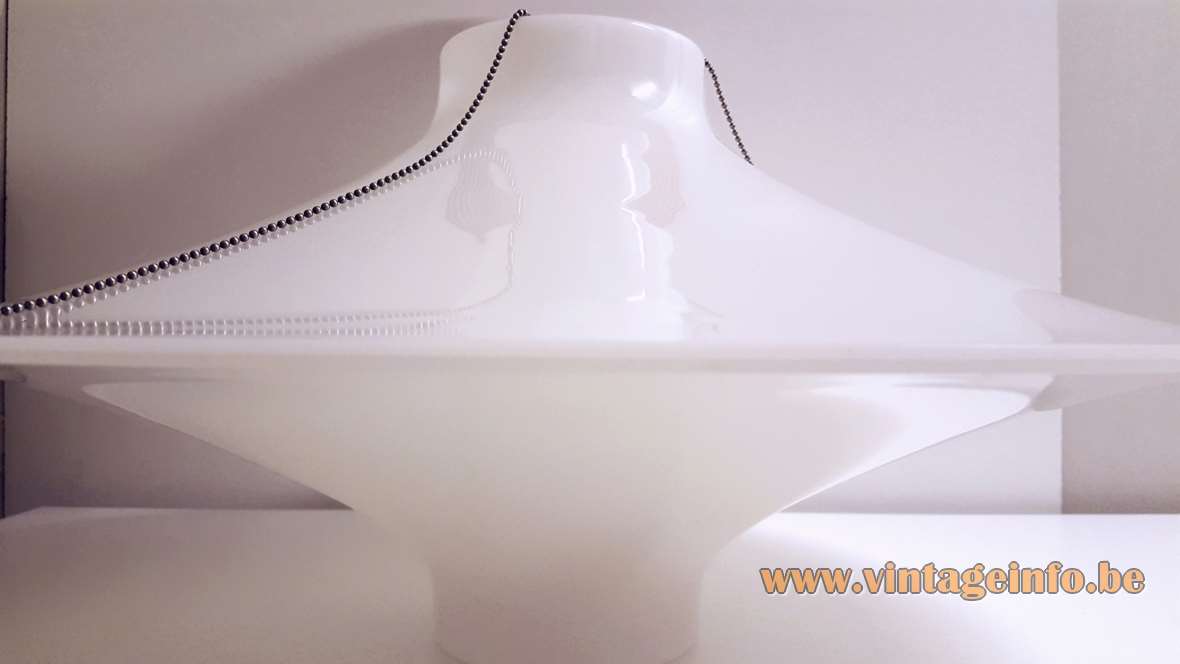 The Yki Nummi Lokki pendant lamp on the Innojok website 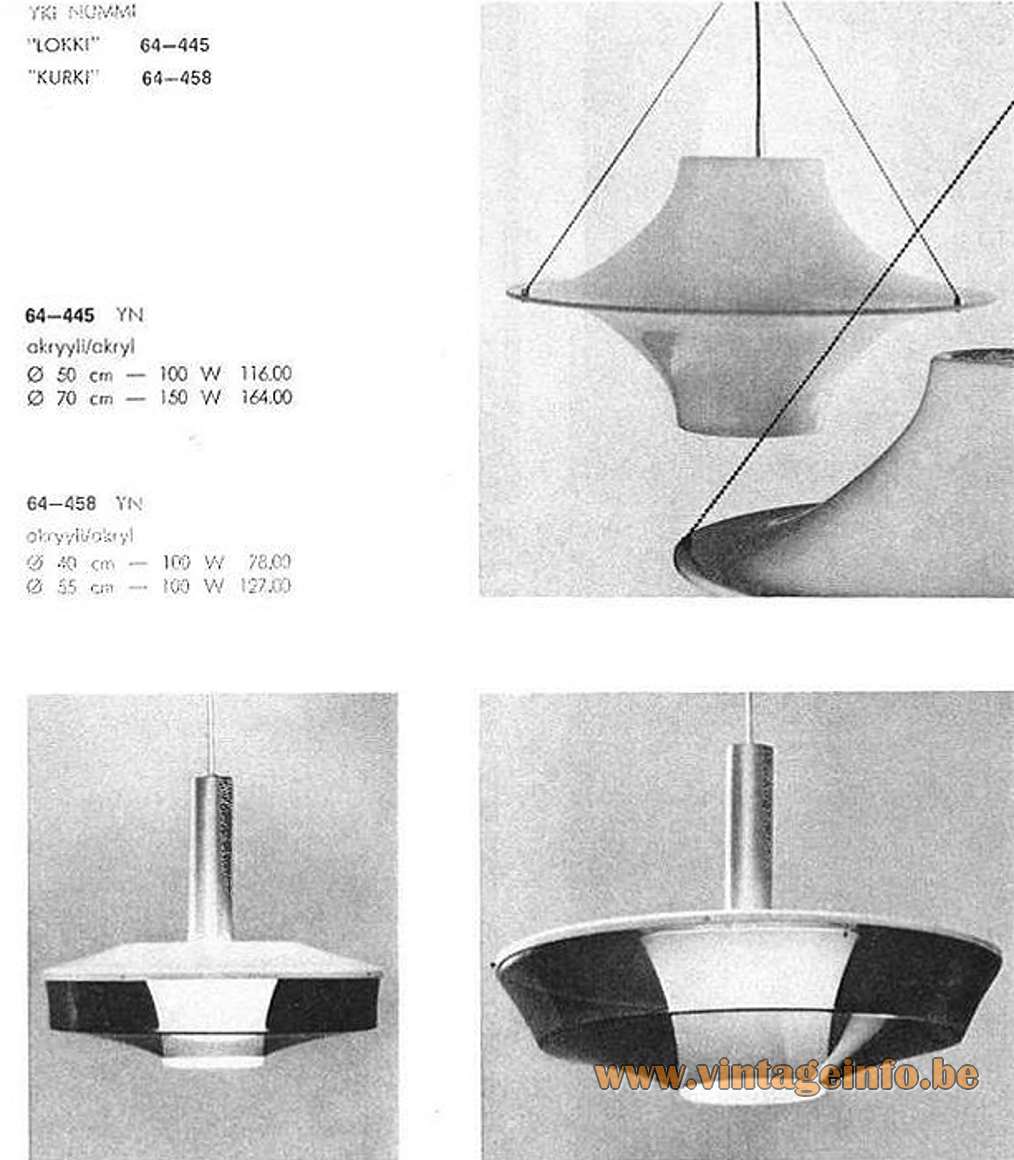 Other versions: The Yki Nummi Lokki pendant lamp also exists in a smaller version: ∅ 50 cm (19.68”) width, as you can see in the catalogue picture.

He worked as lighting designer for the Finnish Stockmann-ORNO A.B. light factory from 1950 to 1975 and designed hundreds of light fixtures.

The best-known light fixtures are the Modern Art table lamp in 1955 and this pendant lamp, the Lokki. Lokki means seagull in Finnish, but they are sold as Sky Flyer or Flying Saucer.

The Lokki was designed in 1960 and is currently manufactured by Keraplast and Innojok Oy (Innolux), both Finish companies. In Germany and The Netherlands these lamps were produced by Adelta. The Dutch part of Adelta from Wassenaar seems to be disappeared since 2018. The website was located at www.adelta-agency.nl.

The acrylic lamps of Stockmann-ORNO were made by Sanka Oy, founded in 1950. The company focused on the design of acrylic plastic, which was a new material at this time. Sanka still exists but since the 70s they produce showers.

Before and during World War II the luminaires were designed by Bertel Lindholm, Gunilla Jung-Pircklén and Gunnel Nyman. From the late 40s to the 60s, ORNO’s main lighting designers were Lisa Johansson-Pape and Yki Nummi.

At the turn of the 50s and 60s came Heikki Turunen and Svea Winkler working for the company. In the mid-60s, Japanese lighting designer Motoko Ishii, who had become known since then, practiced at ORNO. She became famous for the lighting she designed for the German company Staff & Schwarz Leuchtenwerke GMBH. Also Tapio Wirkkala designed lamps for the company.

Stockmann sold ORNO in the mid-80s to Asea, a Swedish company, from which ORNO became the owner of Thorn-Em, England. The name changed in Thorn-ORNO. The factory closed its business in 2001, but Thorn still exists. Thorn is now part of the German Zumtobel Group.

Some ORNO lighting is currently manufactured by at least Keraplast Oy and Innojok Oy. 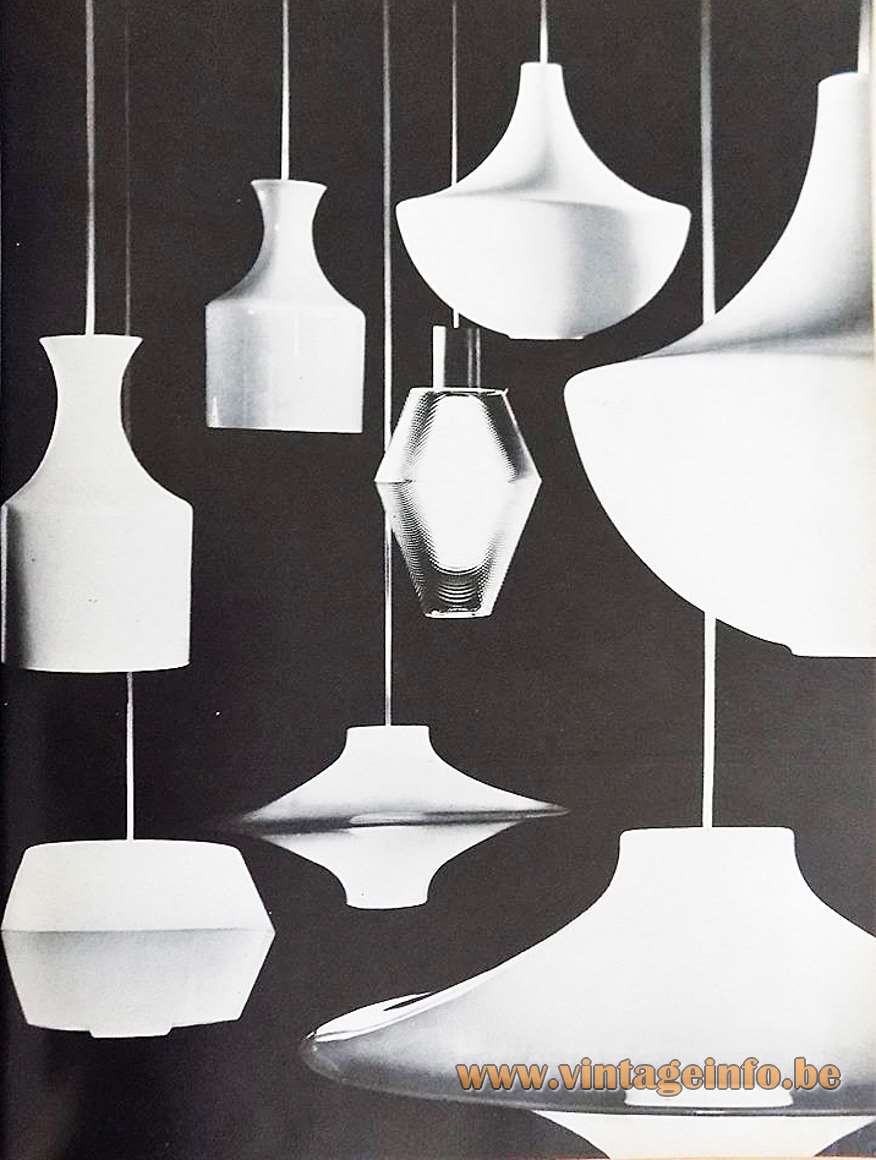