Famous Belgian artist Lou Deprijck on his desk with a Jieldé work lamp in front of his wall with golden records. 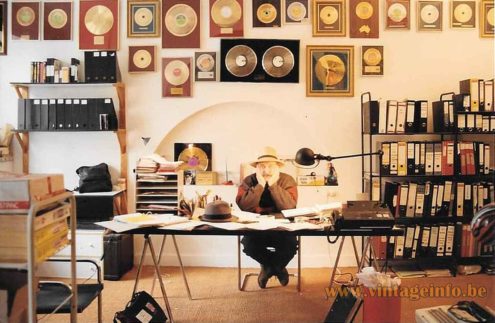 A Jieldé La Standard work lamp was used as a prop in the 1998 crime comedy film Lock, Stock and Two Smoking Barrels. Starring Jason Flemyng, Dexter Fletcher and Jason Statham. Many other lamps appear in this movie. 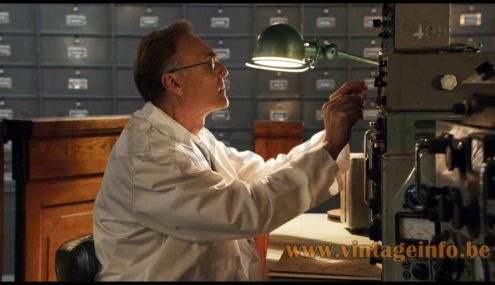 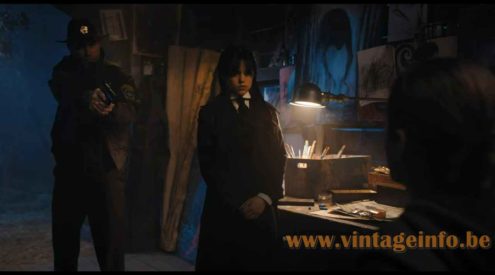 Other versions: The Jieldé La Standard work lamp was made in several versions and colours. It can be used as a desk, workbench or wall lamp. Today, most of the time they are screwed on a round metal or wooden base.

Jean-Louis Domecq, a craftsman and workshop manager, noticed in the 1940s that he needed a light adapted to the activities of his profession. Annoyance was the inspiration for Jean Louis Domecq to develop this work lamp. He had enough of always repairing the hinge lamps in his workshop. The electricity wire was a constant problem and prevented the lamp from turning completely.

He begins to imagine and draw a simple articulated arm lamp, robust and devoid of wires in the joints. In 1950, the project is concretised through a finalised design of the lamp.

Its electrical connection is made possible by copper contacts. Which allows a rotation up to the mechanical limit of each joint. The lamp can be expanded with different arms, but can also be shortened, whereby the cap is screwed directly to the base with a hinge joint.

After his death in 1983, his daughter Marie-Françoise Domecq continues his path. The work lamp will nevertheless see its use be diverted and redesigned. From simple utility, it becomes an object of decoration of industrial style and is renamed La Loft in 1987.

In 2002, Jieldé was sold to Philippe Belier. In 2003, the La Signal lamp was born, a kind of La Loft in reduced format. The Jieldé company still exists. The assortment has been expanded considerably and the lamps are still very popular.

A Jieldé La Standard work lamp was used as a prop in the 2019 Spanish drama film Dolor Y Gloria (Pain And Glory) directed by Pedro Almodóvar. Starring Antonio Banderas, Asier Etxeandia and Penélope Cruz. It was chosen by Time magazine as the best film of the year. Many beautiful lamps appear in this film. Not to mention the rest of the interior.

A Jieldé La Standard work lamp was used as a prop in the 1975 French crime film Peur Sur La Ville (Fear Over the City or Night Caller). Starring Jean-Paul Belmondo, Charles Denner and Giovanni Cianfriglia. Many other lamps appear in this movie. In this scene also a Weltron radio appears. 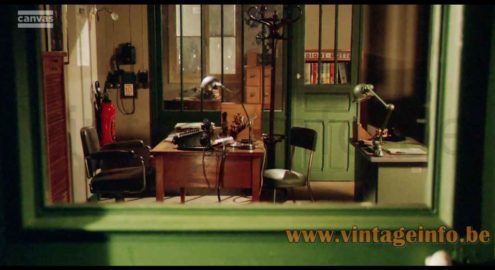 A Jieldé La Standard work lamp was used as a prop in the 2011 American spy film The Double. Starring Richard Gere, Topher Grace and Stephen Moyer.

A big Jieldé “floor” lamp was used as prop in the 2017 Stella Blómkvist (Iceland) crime, drama, thriller TV mini-series. Starring Heida Reed as Stella. Also a Verner Panton Panthella floor lamp was used as a prop. You can find it over here on Vintageinfo.

A Jieldé La Standard work lamp was used as a prop in the 1983 British-American horror film The Hunger. Starring Catherine Deneuve, David Bowie and Susan Sarandon.

The story of the lamp on the Jieldé website

Wikipedia about Jieldé (in French only)

Lamps in the Lock, Stock and Two Smoking Barrels film

Rocket lamp in the Wednesday film