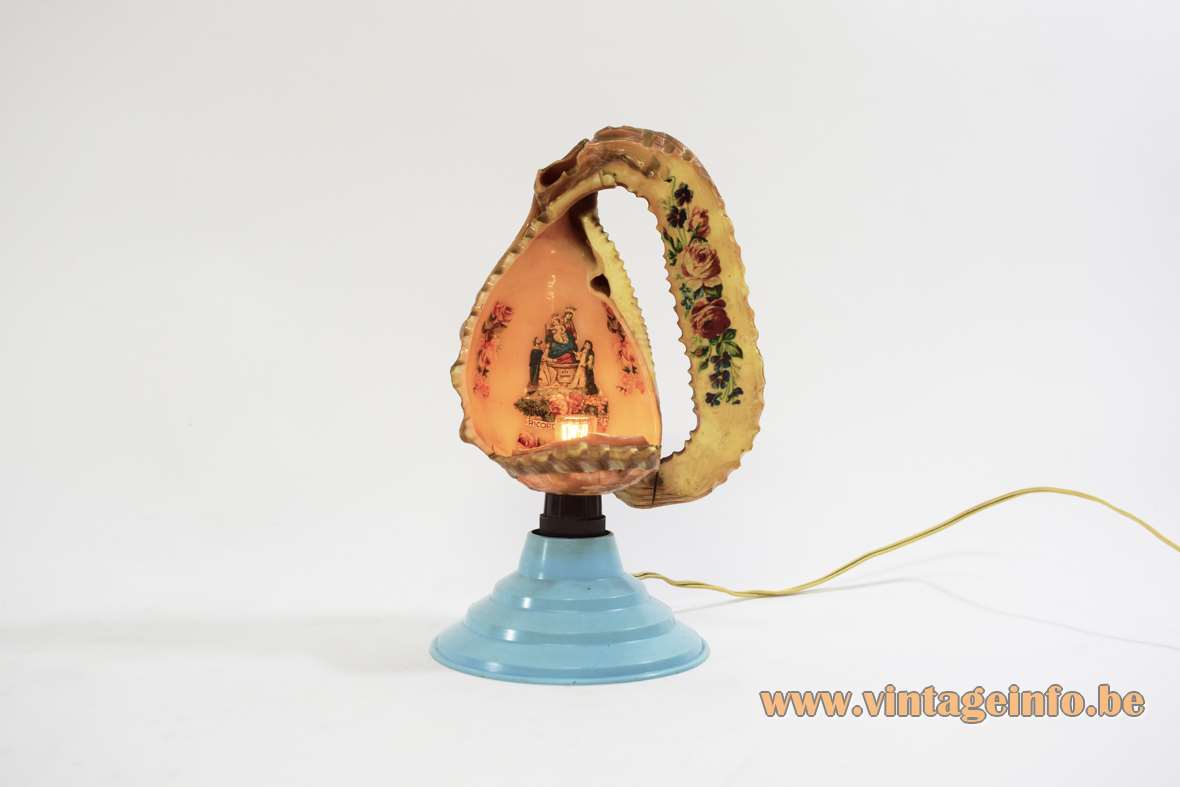 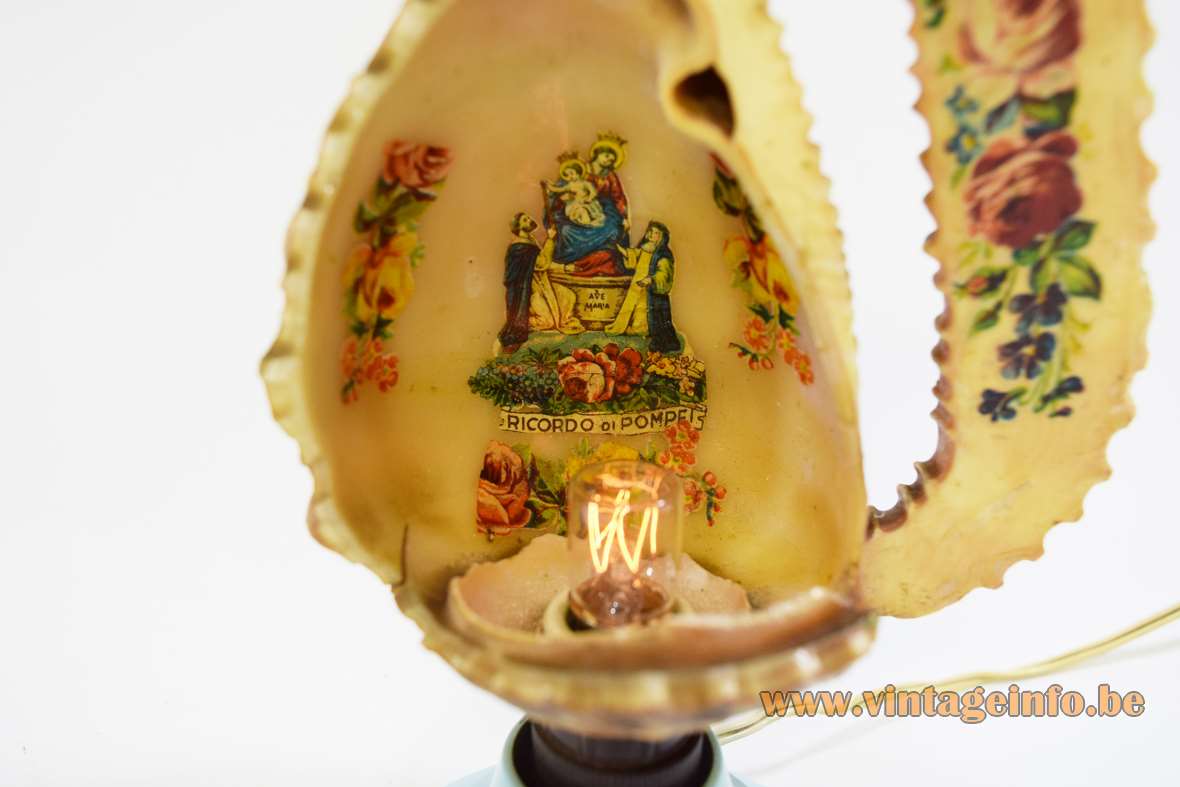 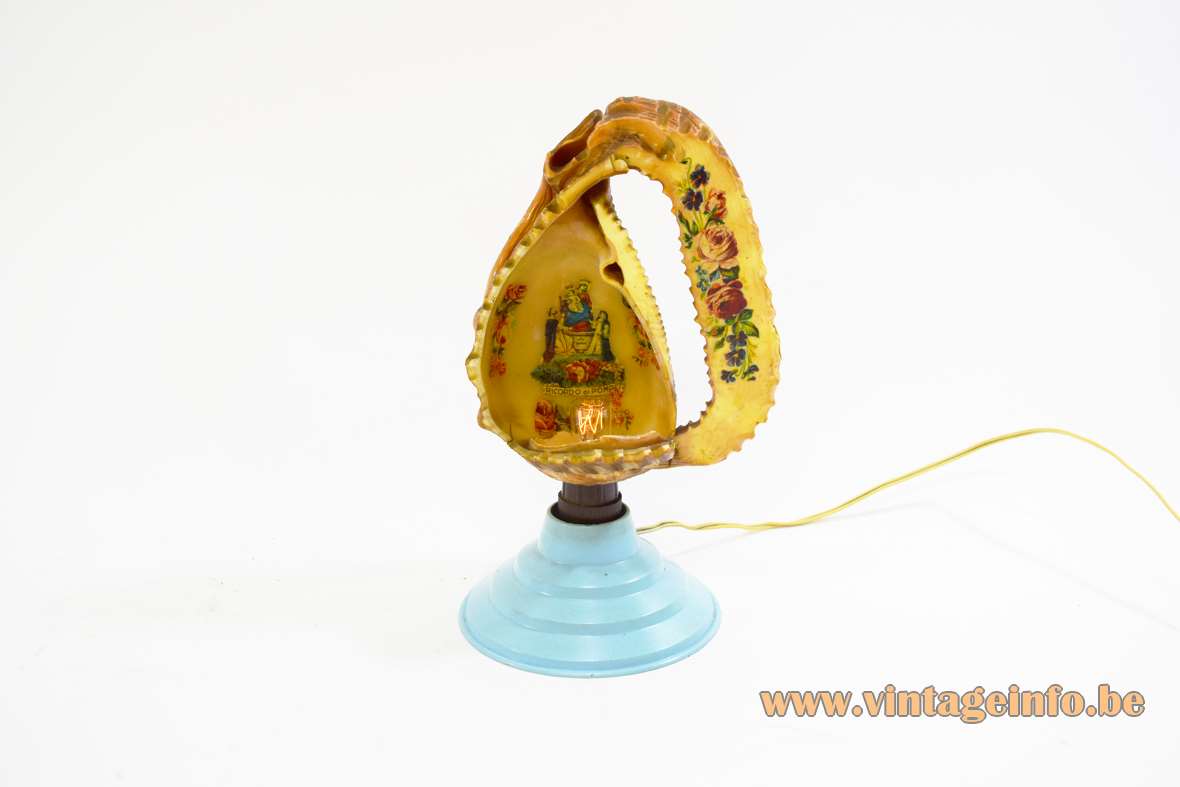 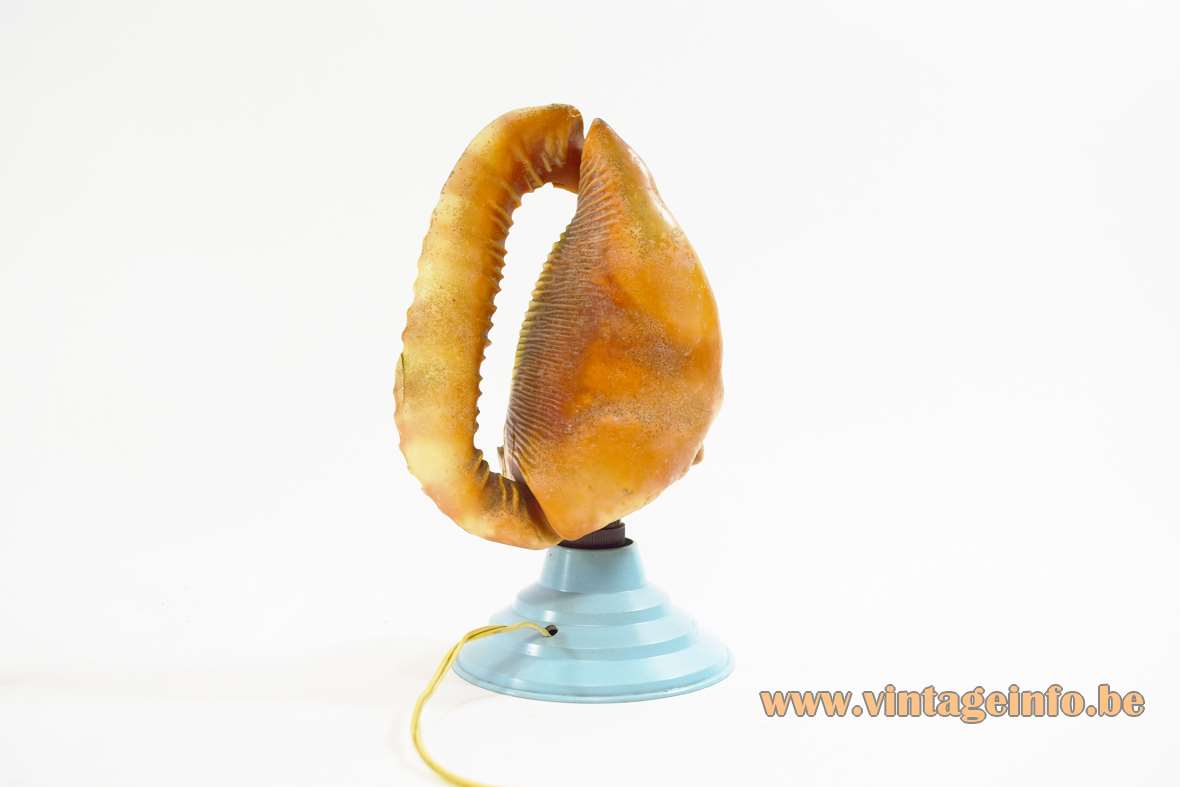 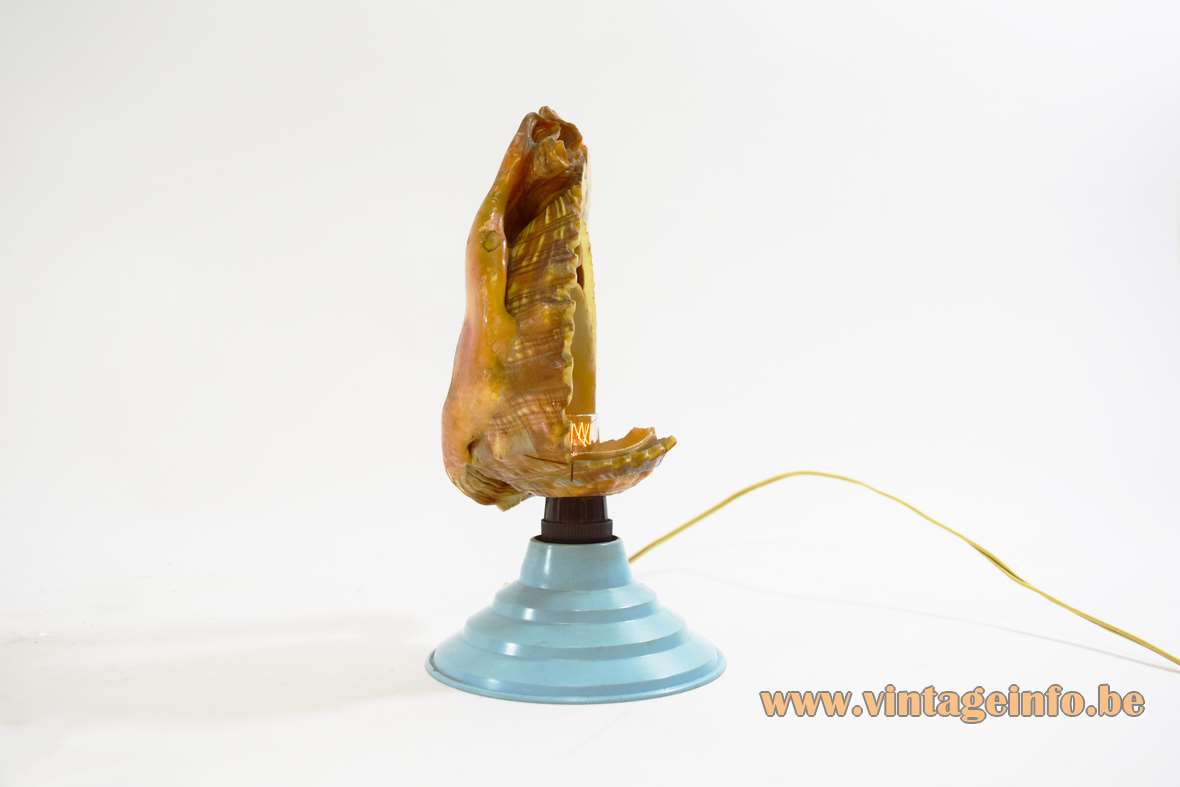 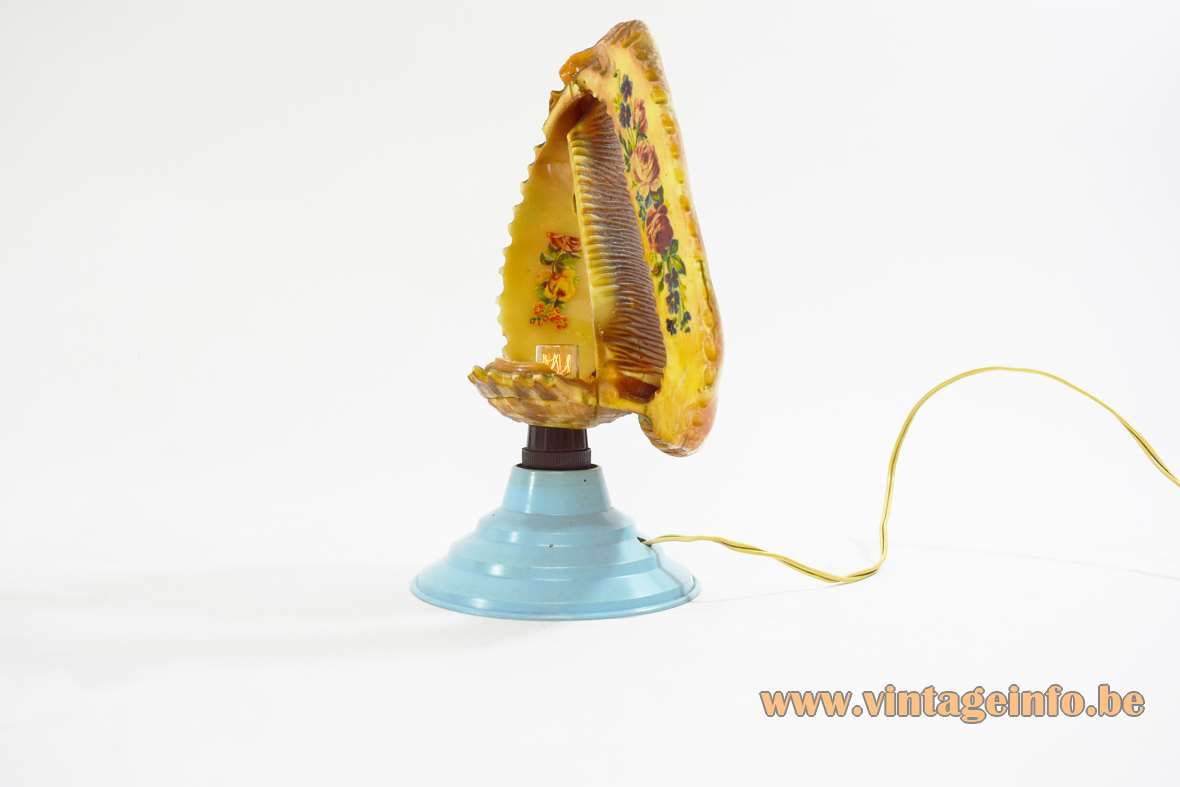 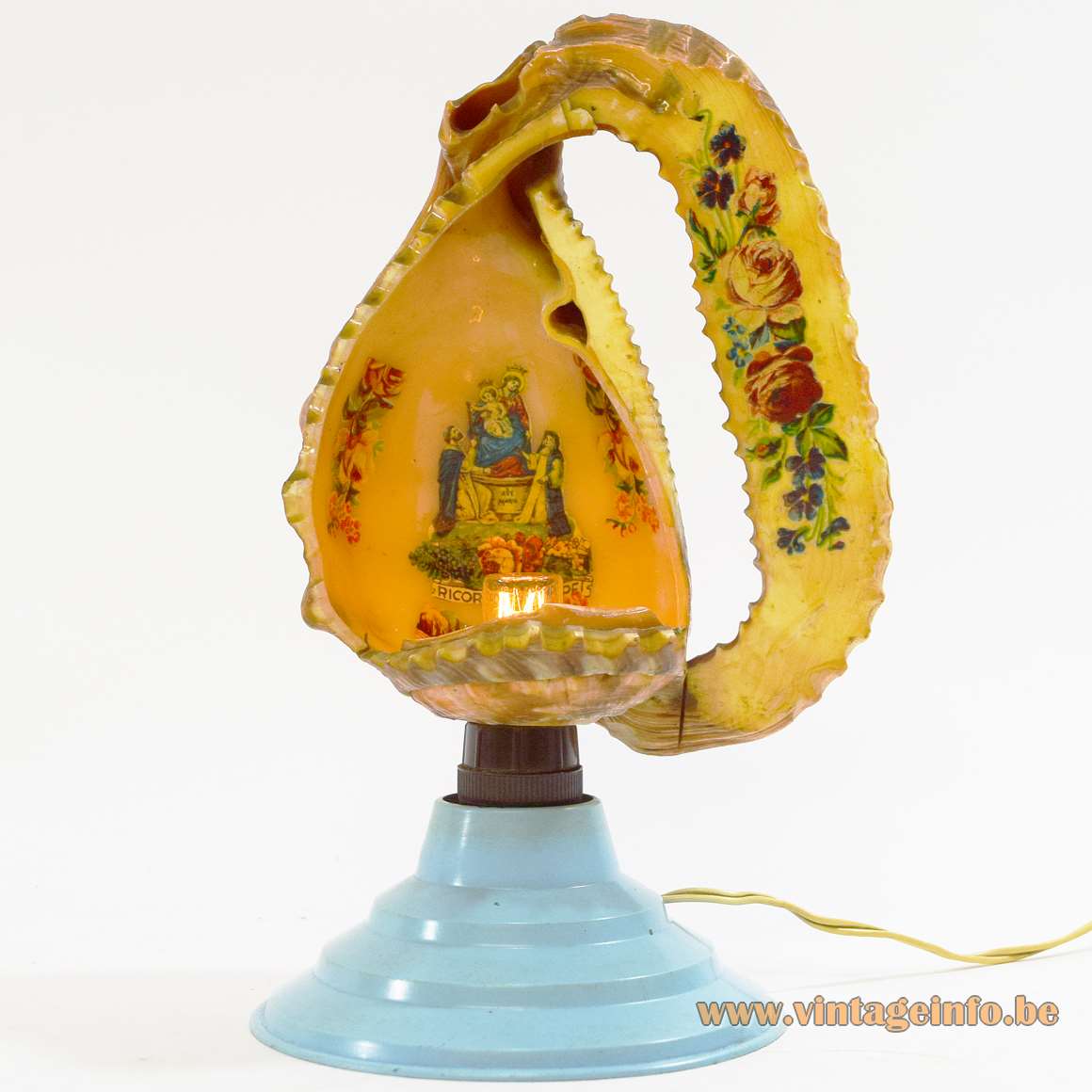 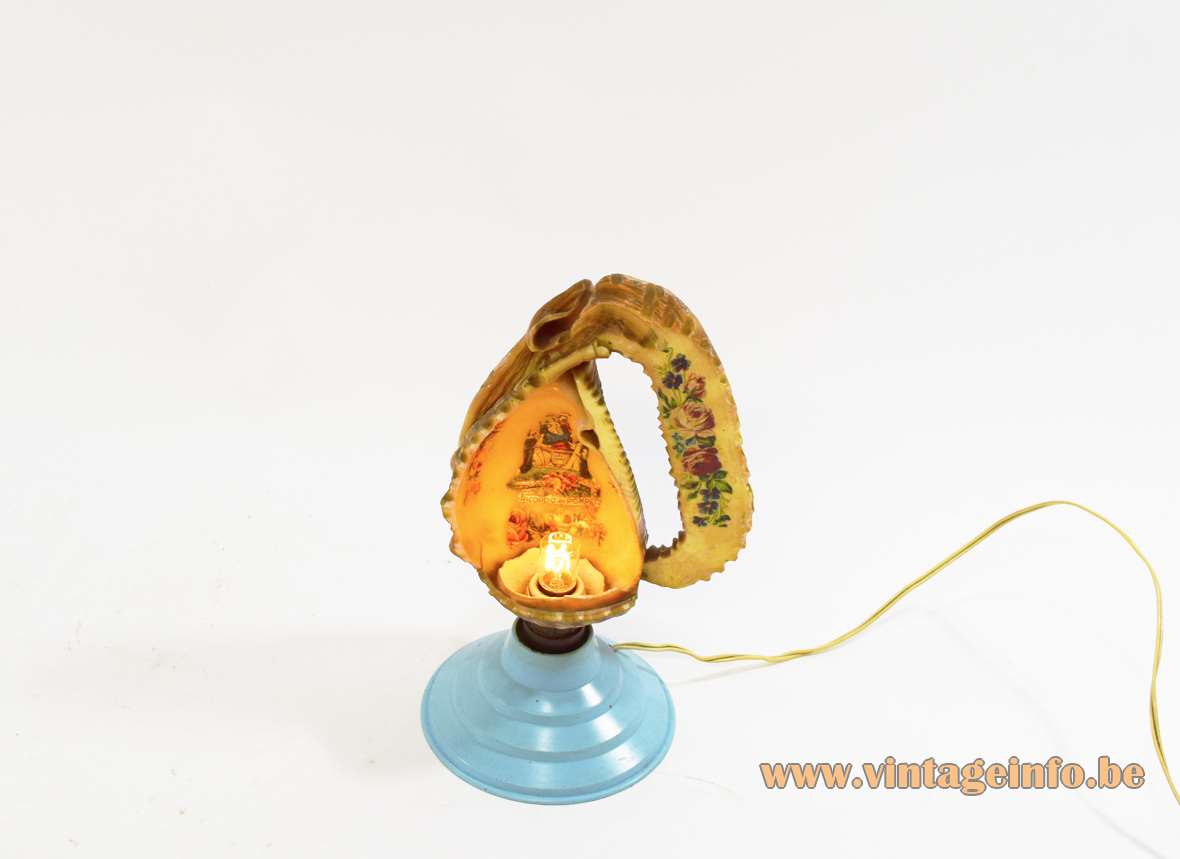 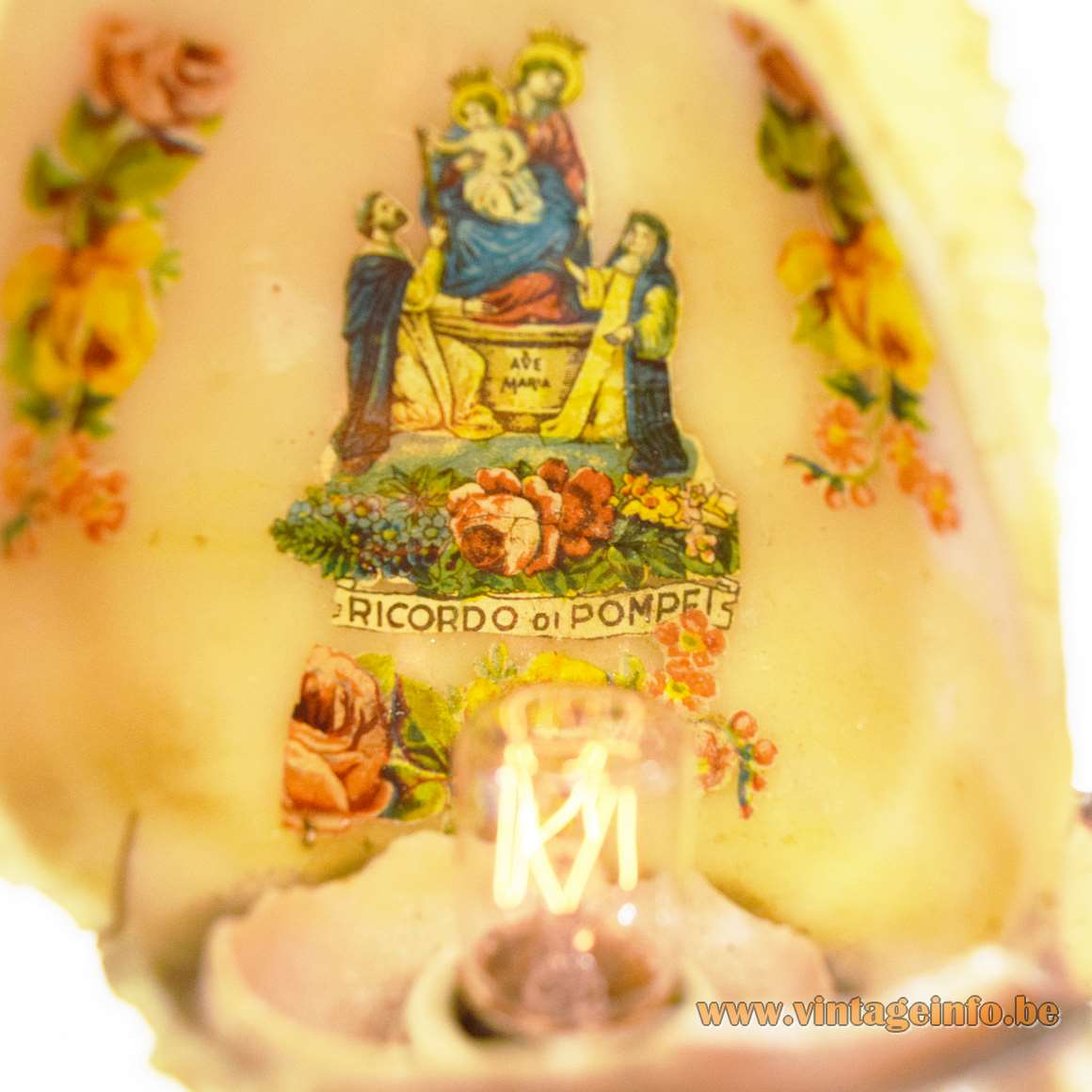 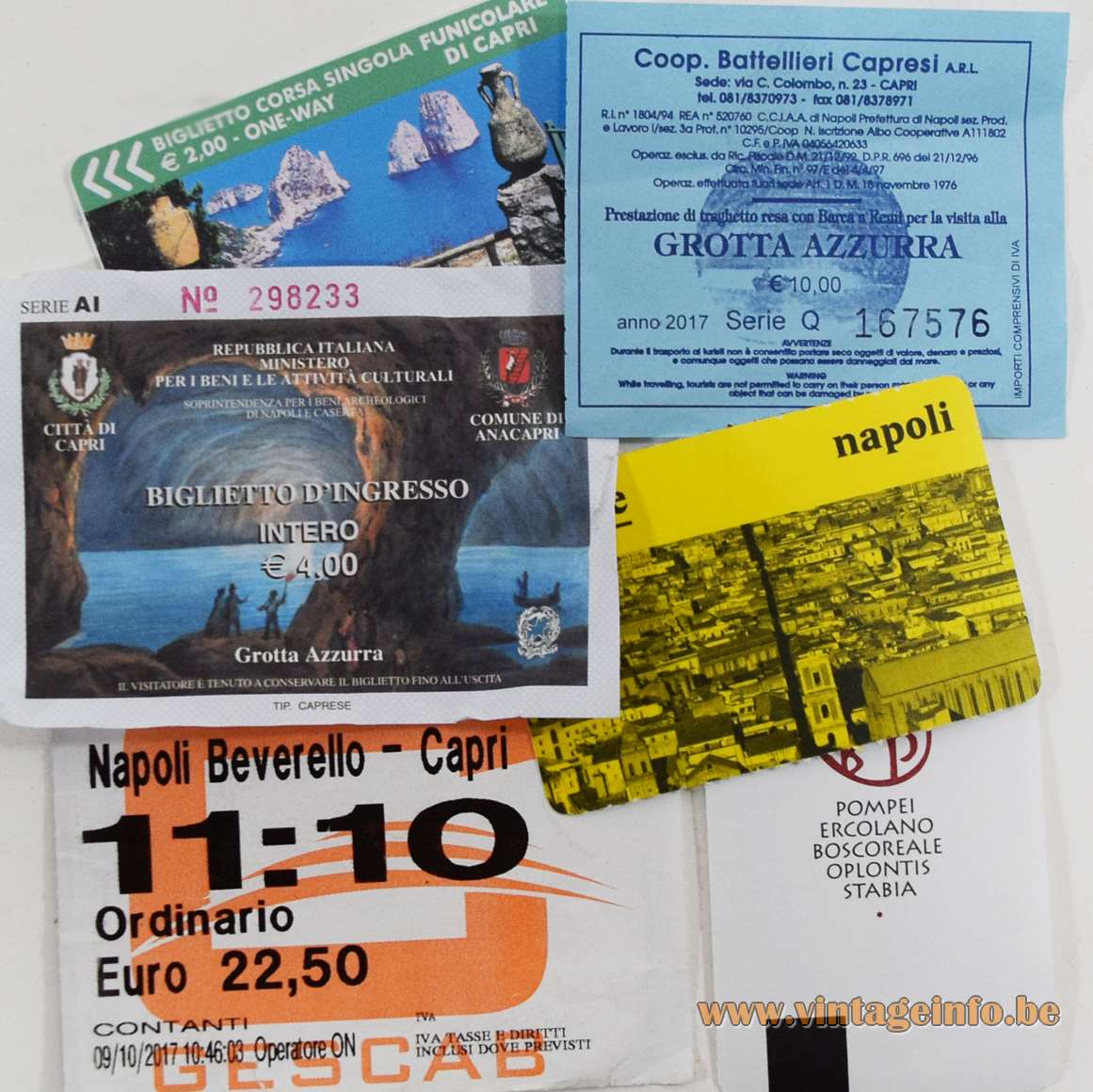 Materials: Light blue painted round conical aluminium base. Part of a sea shell (to be determined) decorated with flowers and a catholic image of Jezus and Maria. Bakelite E14 socket.

Other versions: This Ricordo Di Pompei table lamp exists in several variations. Made with a white and red base. Also a different base was used.

Pompeii was an ancient Roman town near Naples located at the base of Mount Vesuvius in Italy. The city and the surrounding area was mostly destroyed and buried under some 6 meter (20 ft) of volcanic ash and pumice in the eruption of the volcano in AD 79.

The nearby town Herculaneum was also destroyed. Pompeii and Herculaneum have been a tourist destination for over 250 years. Herculaneum is the least known of the two, but it has the most beautiful remnants.

Naples is the capital of the southern Italian region Campania and the third-largest municipality in Italy after Rome and Milan with almost 1 million inhabitants (2017). It is located on the Amalfi Coast.

The city is well known for its historical museums. The Naples National Archaeological Museum (Museo archeologico nazionale di Napoli) is one of the city’s main museums. It has one of the most extensive collections of artefacts of the Roman Empire in the world. The second most important museum is the Museo di Capodimonte. It is one of the largest museums in Italy with mainly paintings and decorative arts.

Naples is the birthplace of the modern pizza. That certainly does not mean that you can eat a decent pizza over there. Most of the restaurants in the town are a tourist trap. Use at least TripAdvisor to guide you or you will be very disappointed.

Naples has a design museum, but it’s only about plastic, vintage and contemporary plastic. It is named Fondazioneplart (Fondazione/Foundation Plastic Art) in the Via Giuseppe Martucci, 48. A small museum, but it’s the best thing about design you can get in the city. Easy to reach with the subway. The exit is nearby in the “Stazione Napoli Piazza Amedeo“.

Capri is the legendary island in the Bay of Naples. It was the playground of the jet set in the 1950’s and 1960’s. Today it is some resort and another tourist trap.

The Blue Grotto (Grotta Azzurra) is a good example. It takes you more than an hour to wait in small boats to visit the grotto. And suddenly in a few minutes you are back outside. It is a very small cave without stalactites. You have to pay for the boat that brings you over there along the coast and you’ll have to pay the entrance and a tip. 10 + 4 euro. Compared to the price of a beer in a bar in the harbor (8 euro) it’s OK…

The most famous song about the Island was by the French singer Hervé Villard. “Capri C’est Fini” was a big hit in 1965. The song talks about a break-up of a relationship that had started in Capri.

Despite everything, Capri has some of it’s old glamour left. A good example is this sputnik chandelier in a restaurant in the main street, as you can see below.

And last but not least: beware for pickpockets, they are everywhere. 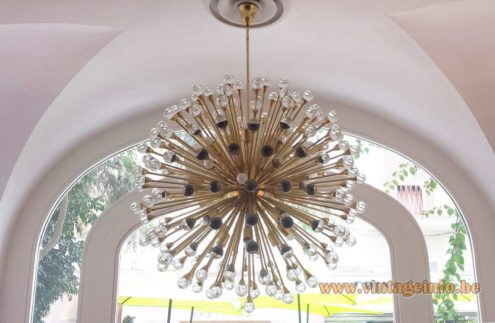 Pierre Faveere Agate Geode Table Lamp
Boulanger Brass & Chrome Reed Table Lamp
WOFI Leuchten Zebra Globe Table Lamp
1960s Felt Clown Bobblehead Table Lamp
Vintageinfo uses cookies to improve the functioning of this website. First party cookies (cookies for our statistics) and the “Last Viewed” cookie is obvious. The other cookies are from Google. Nothing to be worried about, but we have to mention it. You can opt-out or block the cookies, no problem, the website will be available, only the “Last viewed” items won’t be visible.Accept Read More
Privacy & Cookies Policy