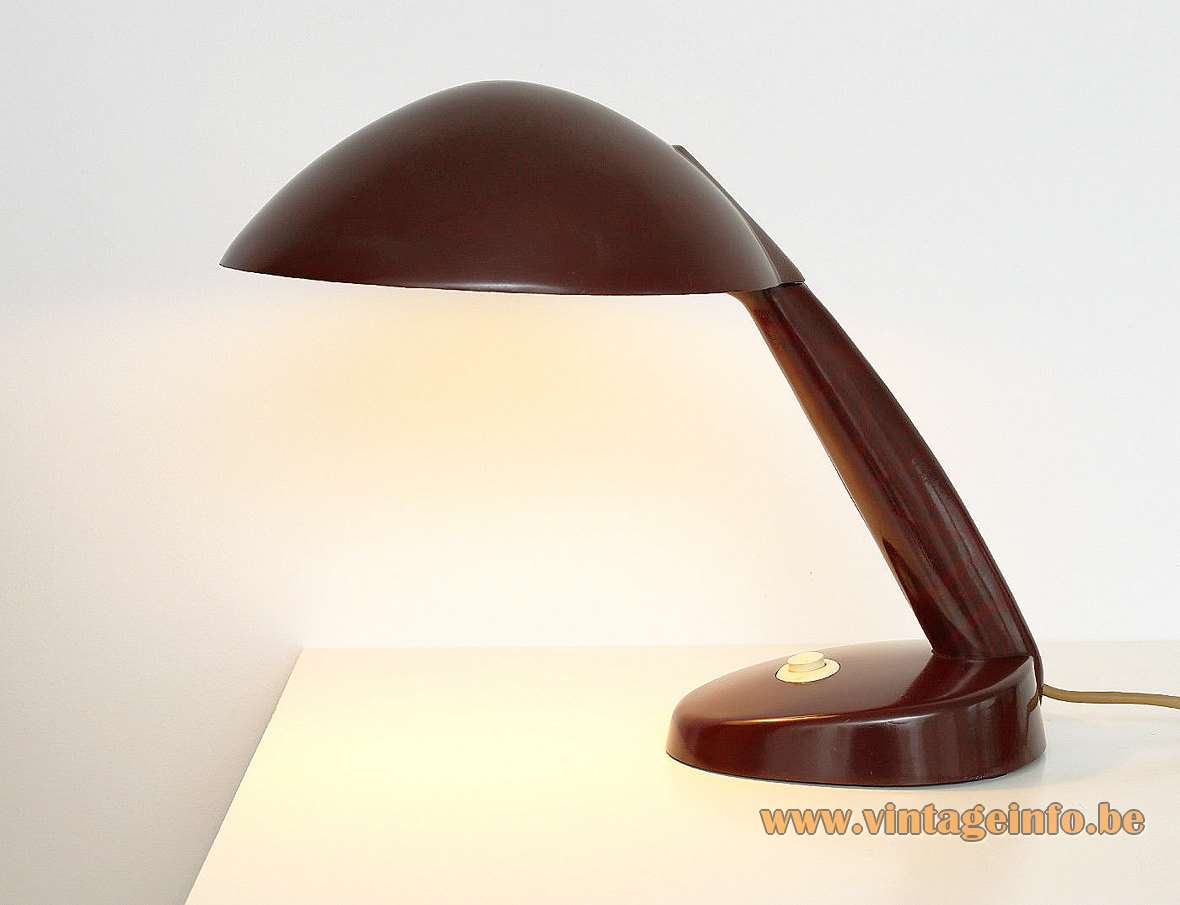 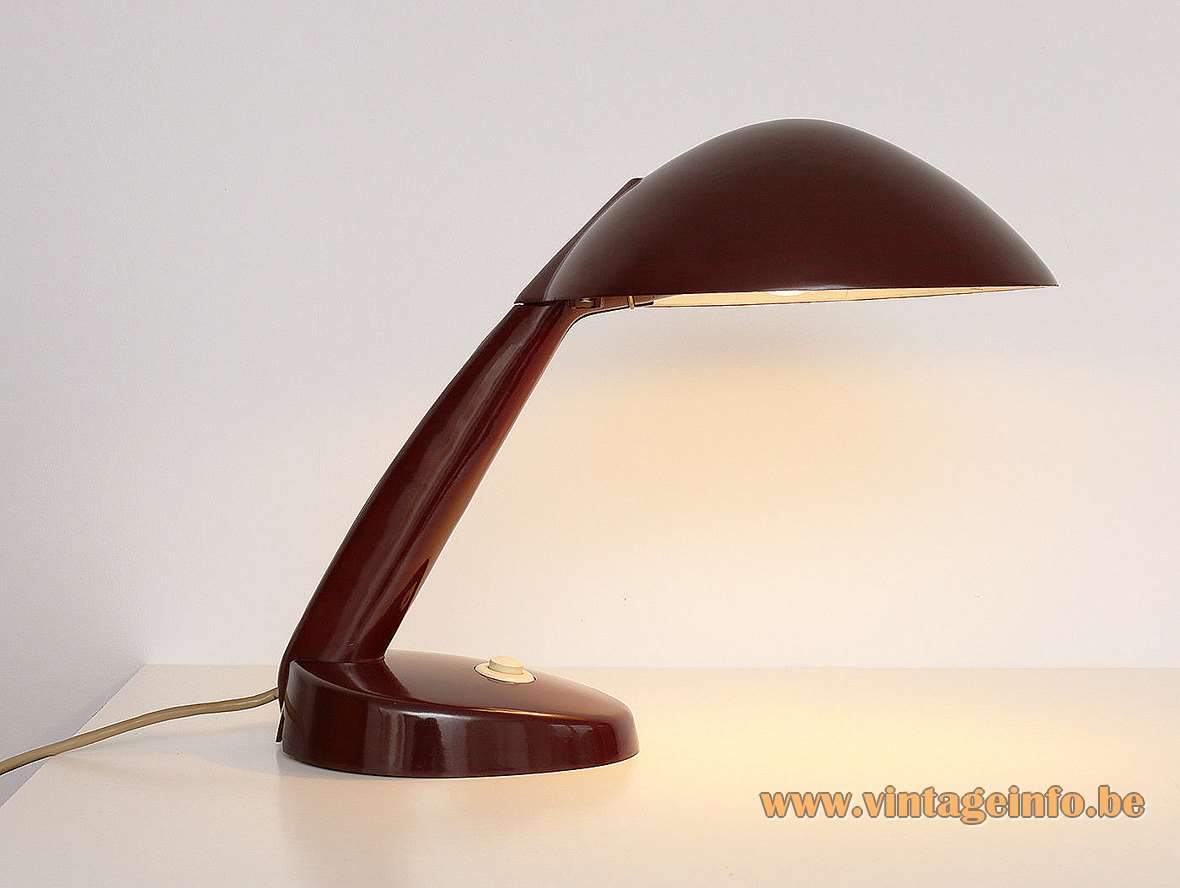 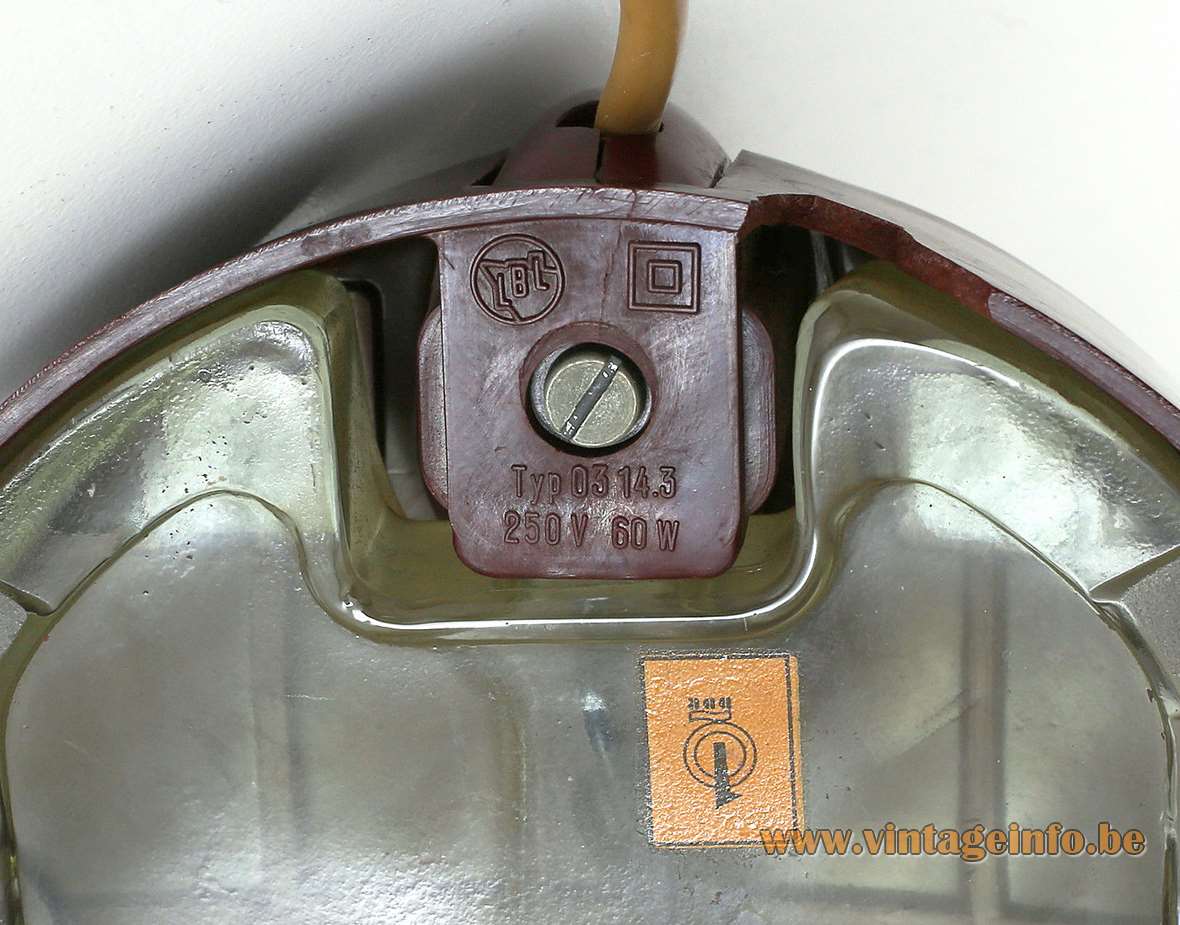 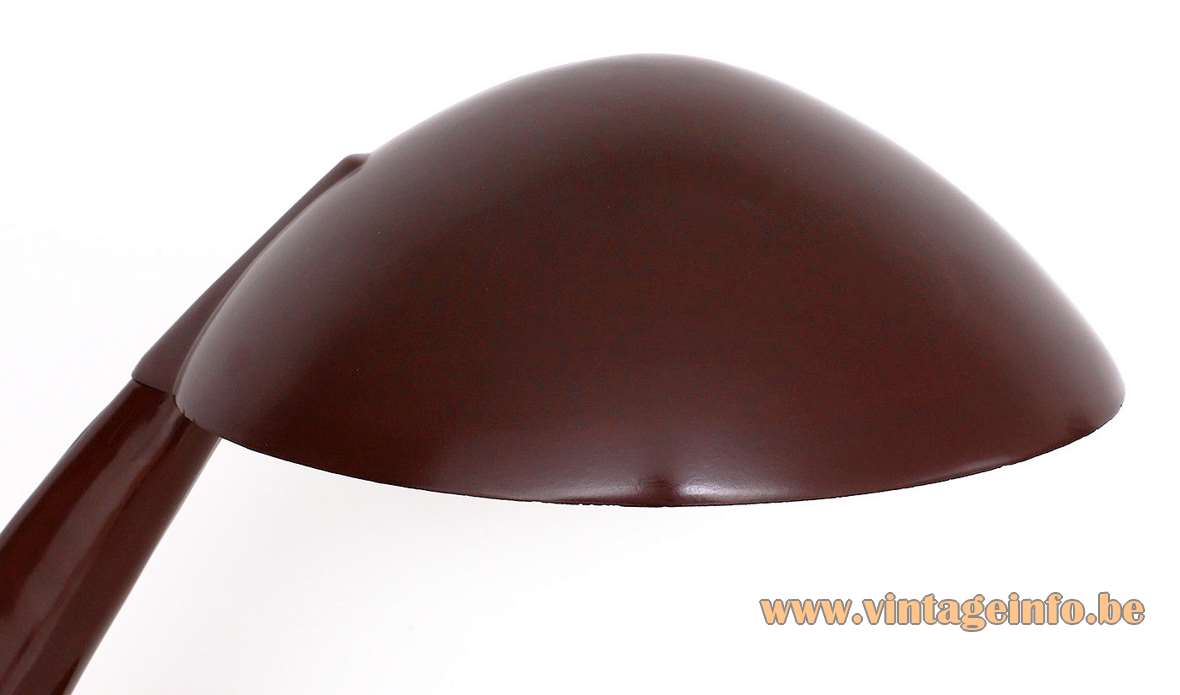 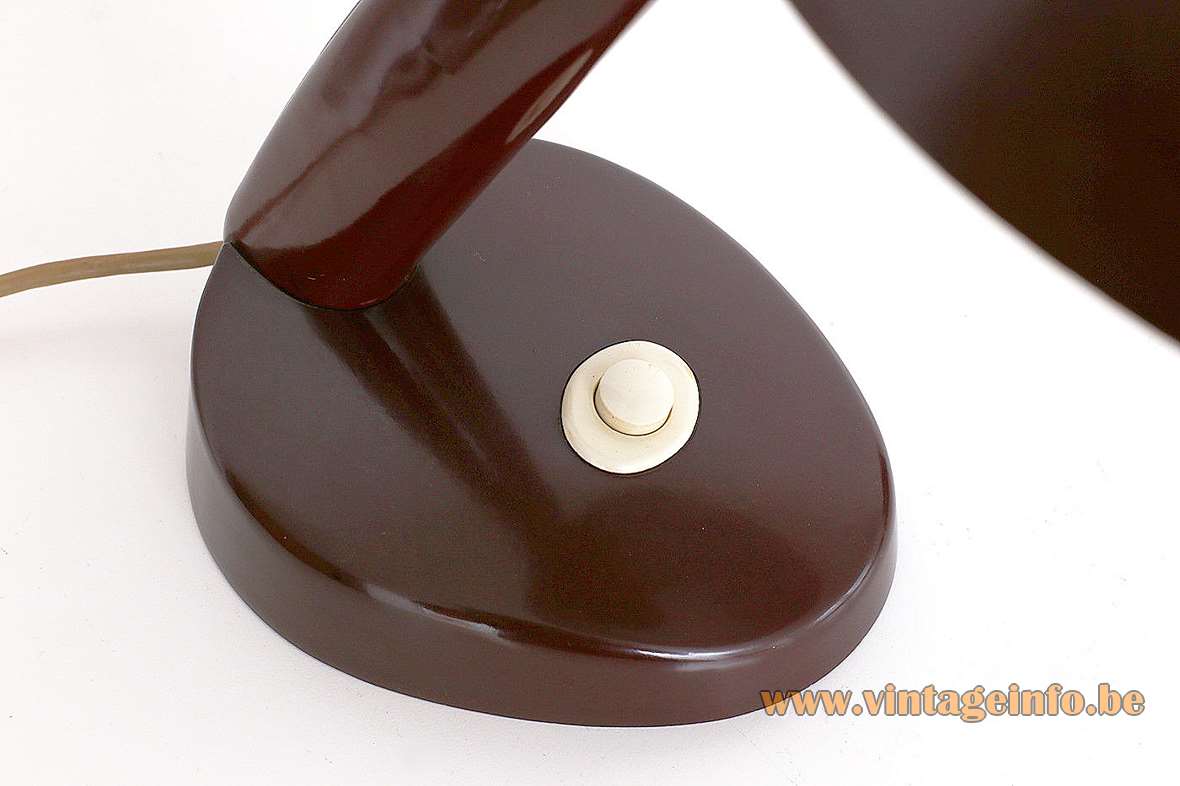 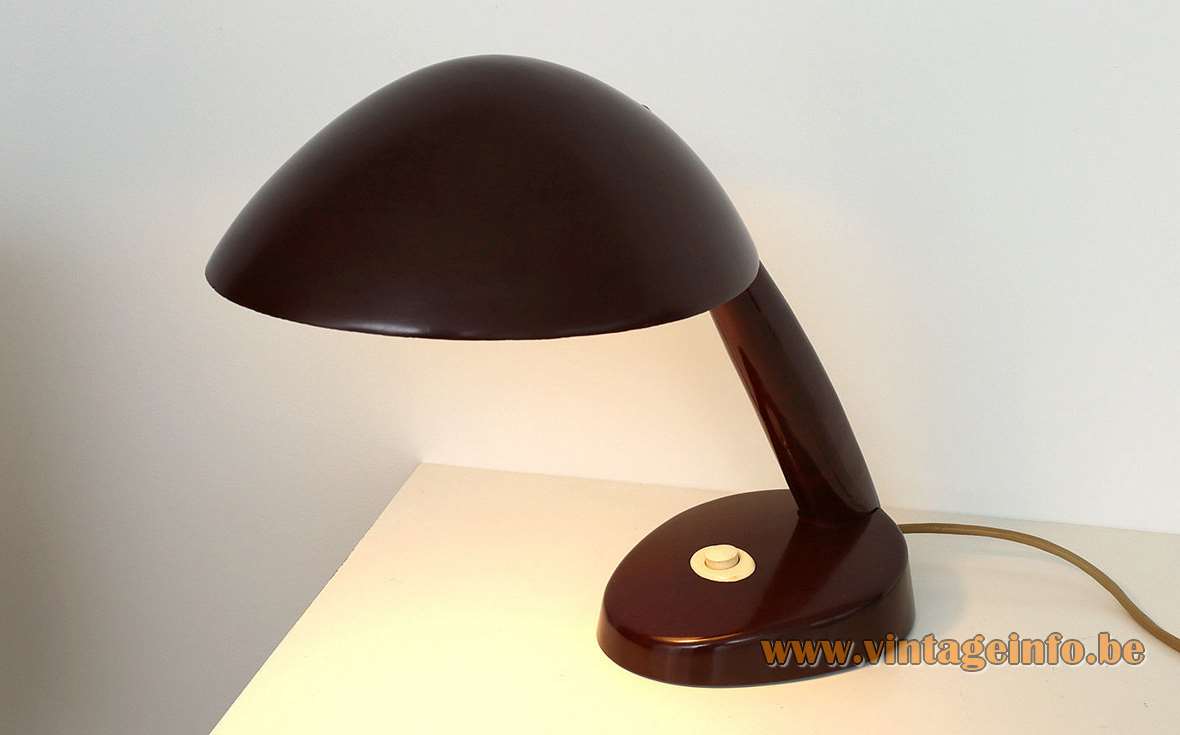 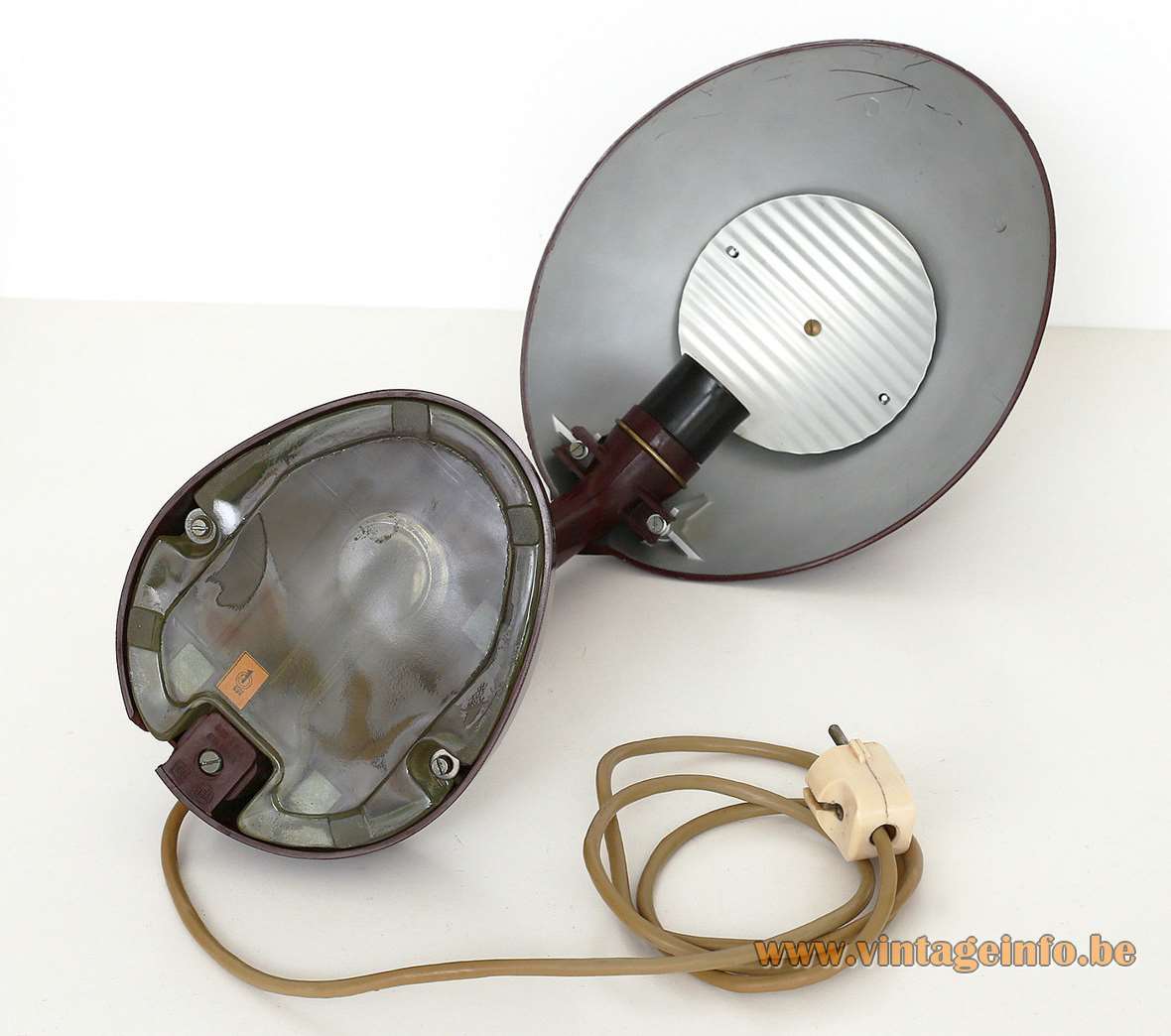 Materials: Red Bakelite, silver painted inside the oval lampshade. Aluminium heat sink. The bottom of the oval base is made of heavy glass for the counterweight. Some metal parts. Built-in white Bakelite switch. Black Bakelite E27 socket.

Other versions: This Bauhaus style Kandem LBL red Bakelite desk lamp exists only in one version.

VEB Leuchtenbau Leipzig, LBL was founded in 1889 by Max Körting (1862-1948) and Wilhelm Mathiesen (1859-1936) as Körting & Mathiesen AG, Bogenlampenfabrik, (carbon-arc lighting for street lighting). It was one of the first lighting manufacturers in Germany.

In 1901, the company changed its name to Körting & Mathiesen AG. 13 years later, in 1914 “Kandem” was chosen as brand name and the company produced the first lighting.

The first “design classics” of the company were desk lamps model 656 and model 679 designed by Marianne Brandt (1893-1983) and Hin Bredendieck (1904-1995) in 1928. Brandt became head of the metal workshop in Bauhaus in 1928. Kandem sold 50,000 lamps in just a few years. At the Bauhaus metalworking workshop, Brandt worked with Christian Dell, Hans Przyrembel, and Wilhelm Wagenfeld. The also popular model 937 was designed by Heinrich Siegfried Bormann.

Those who decided to initiate cooperation between the Bauhaus Dessau and K & M from 1928 to 1933 are unknown. Walter Gropius, Hannes Meyer and Ludwig Mies van der Rohe were the directors at that time. In these five years, at least 25 luminary models have been created. Many models designed by the Bauhaus designers were manufactured and distributed until at least 1939, partly in slightly modified form.

During the period under the Nazi regime the company was nationalised and became one of the leaders in the production of household appliances. During World War II Kandem produced mainly large headlights to track down bombers.

Mostly women, foreign and forced labourers worked in the factory at the time of liberation by American troops in April 1945. The factory equipment was partial dismantled at the end of 1945 and goes to the Soviet Union as a reparation service. Production continued under Russian direction.

In 1948 was the repurchase of the company and founding of the state-owned company Leipziger Lichttechnische Spezialfabrik (VEB Lelifa). VEB: Volkseigener Betrieb. German for people-owned enterprise.

In the same year, the son of the founder, Fritz Körting, who had been on board since 1930, set up the company Kandem Apparate- und Leuchtenbau GmbH in Limburg an der Lahn in West Germany (Apparatus and lighting construction).

In 1951 the reorganisation or reestablishment of the state enterprise “VEB Leuchtenbau Leipzig” takes place, shortly LBL. It was the largest luminaire manufacturer in the GDR with 1100 employees.

In the late 1950s street luminaires in the form of a spoon were made. A well known design used for many streets in the GDR and the USSR.

During the German unification in 1990 the company came under the management of trustees. In 1993 the company was wound-up. The company became Leipziger Leuchten GmbH.

Kandem Leuchten GmbH from Fritz Körting in Limburg an der Lahn became a member of the Dr. Fisher Group in 2010.

Designers that worked for the company were, amongst others: Marianne Brandt, Hin Bredendieck, Heinrich Siegfried Bormann, Hermann Gautel, Alfred Schäfter and Helmut Schulze.