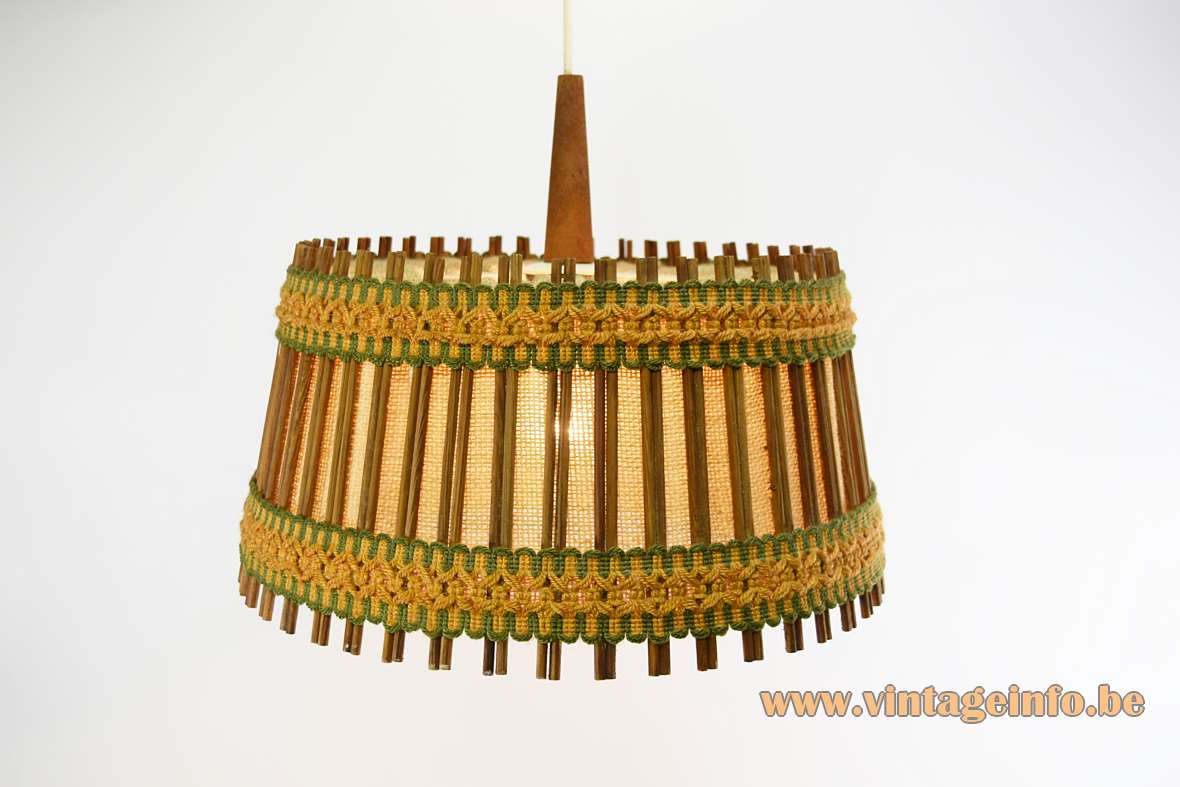 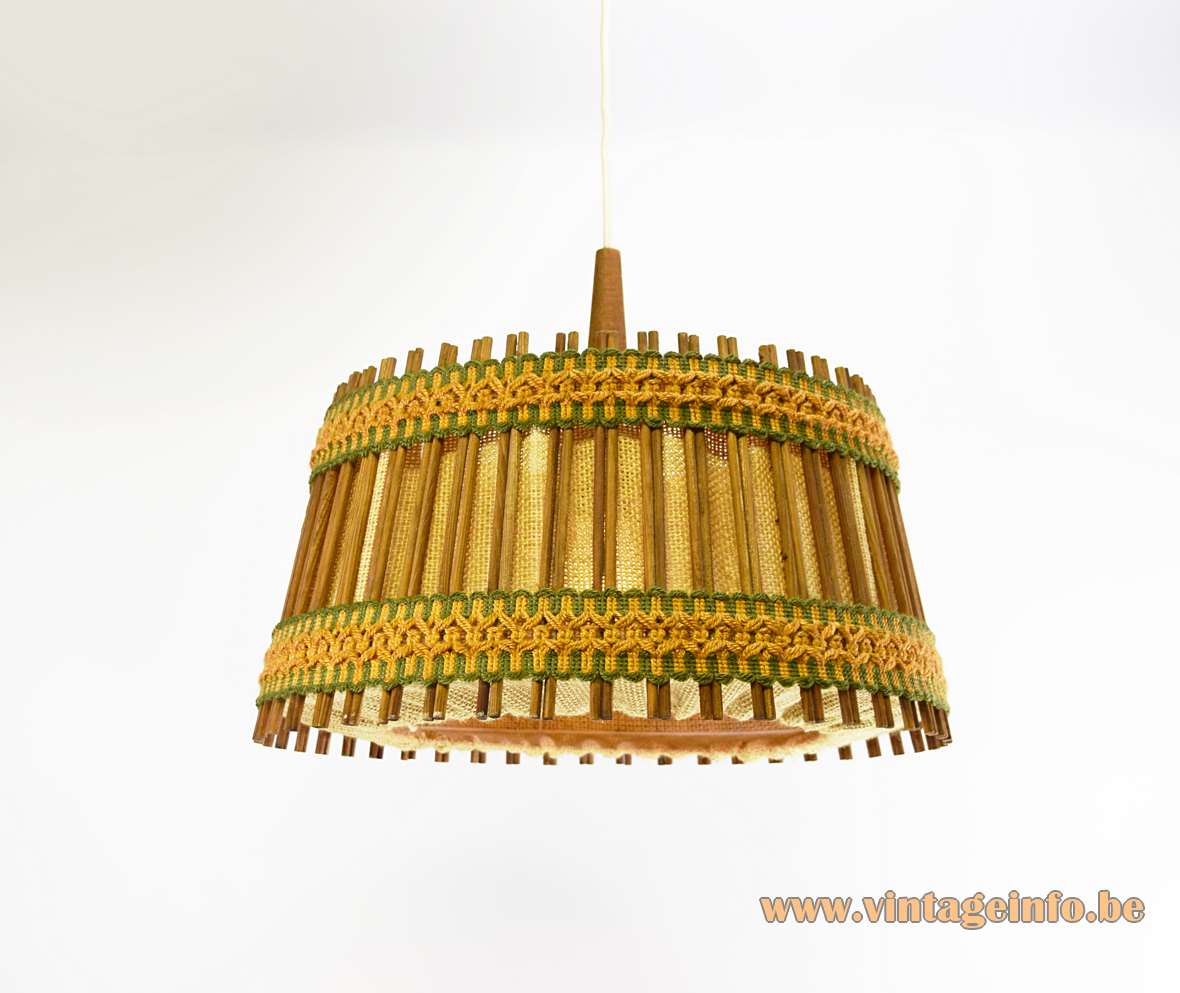 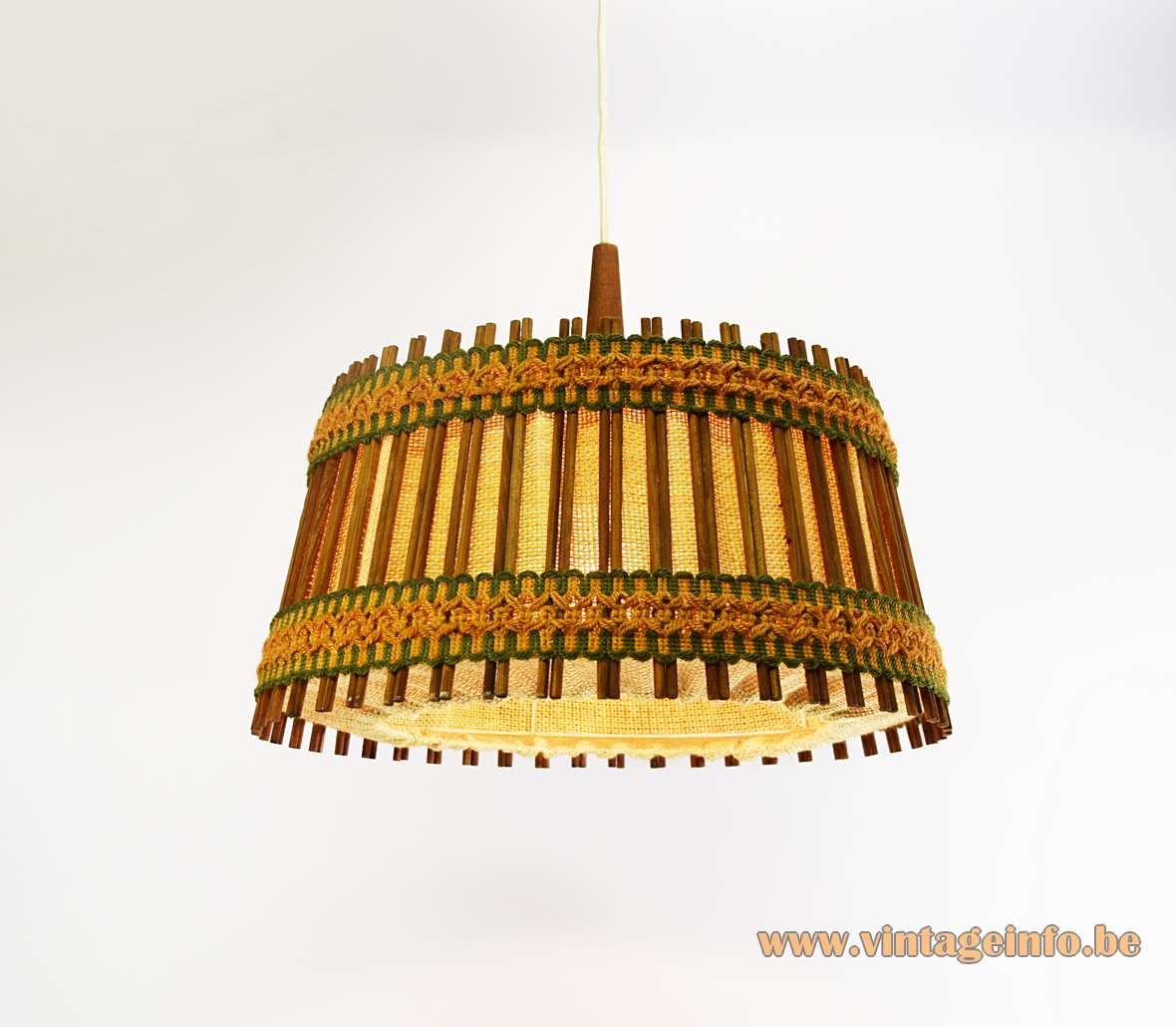 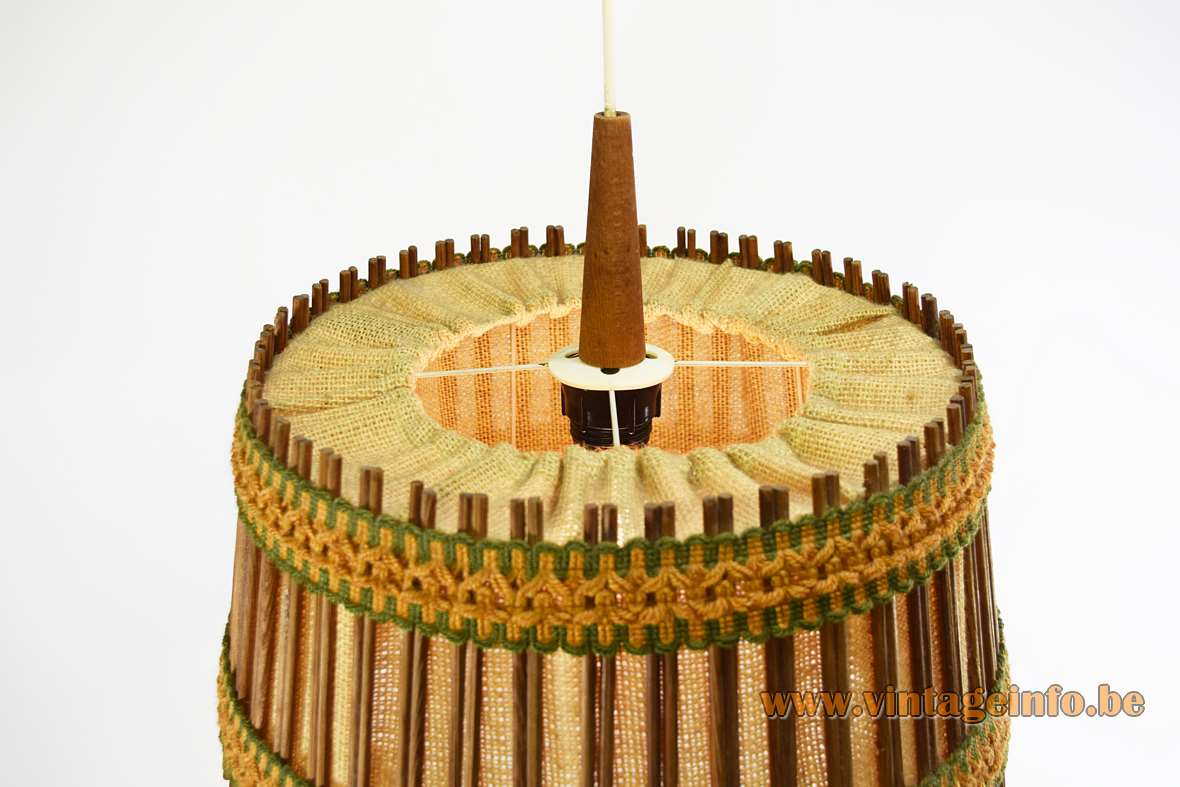 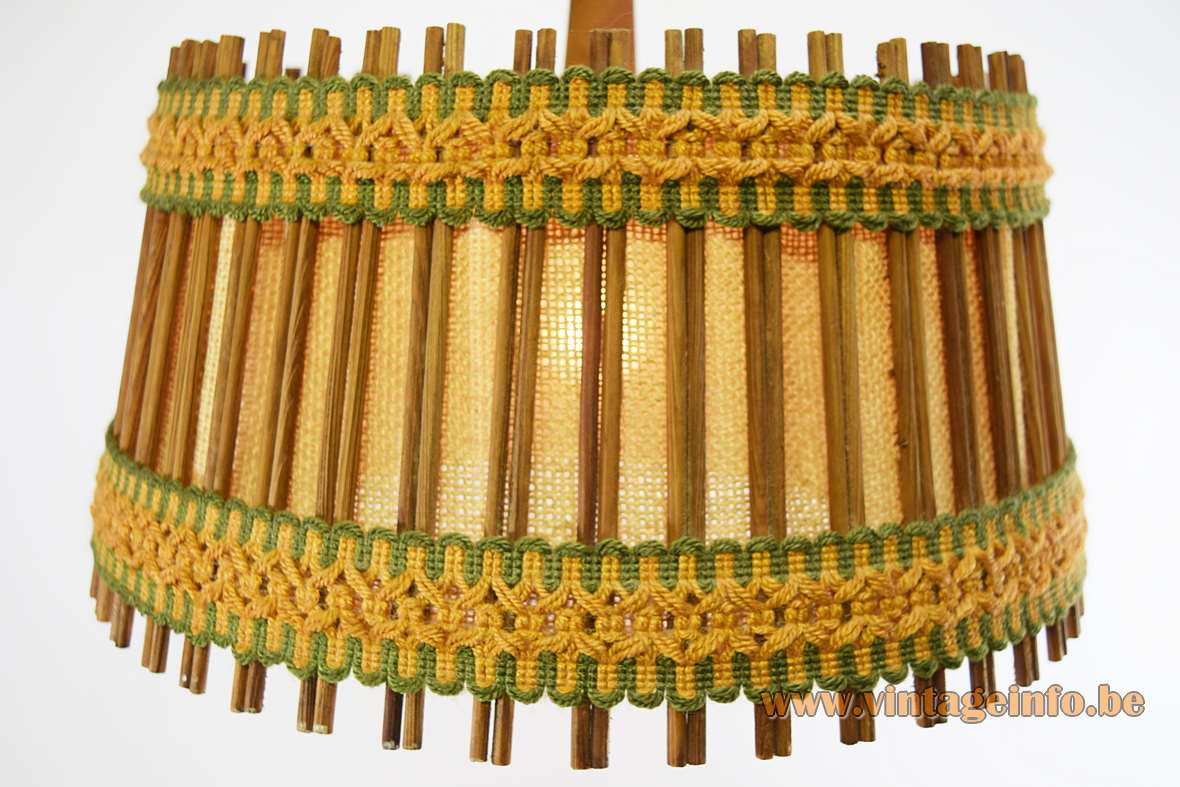 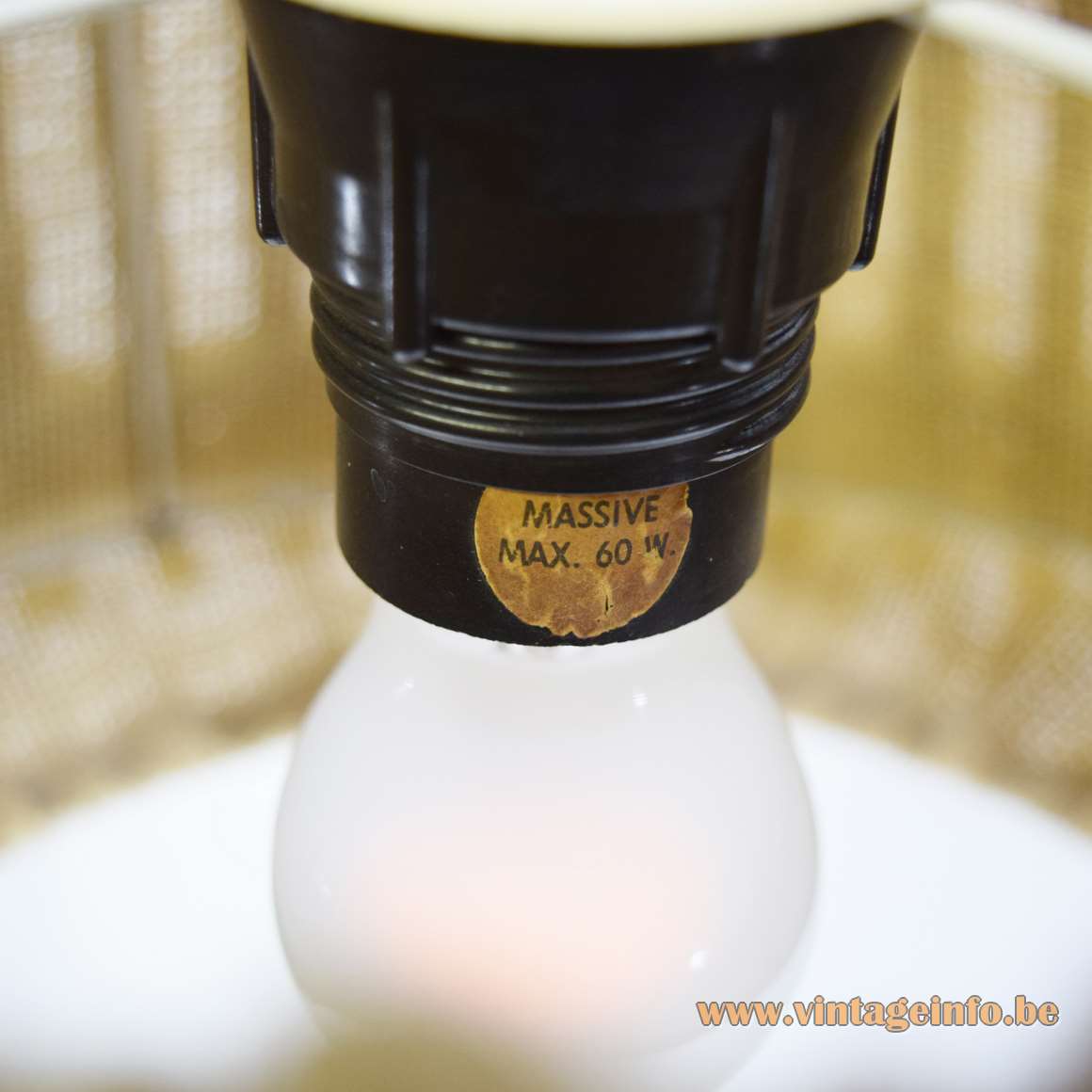 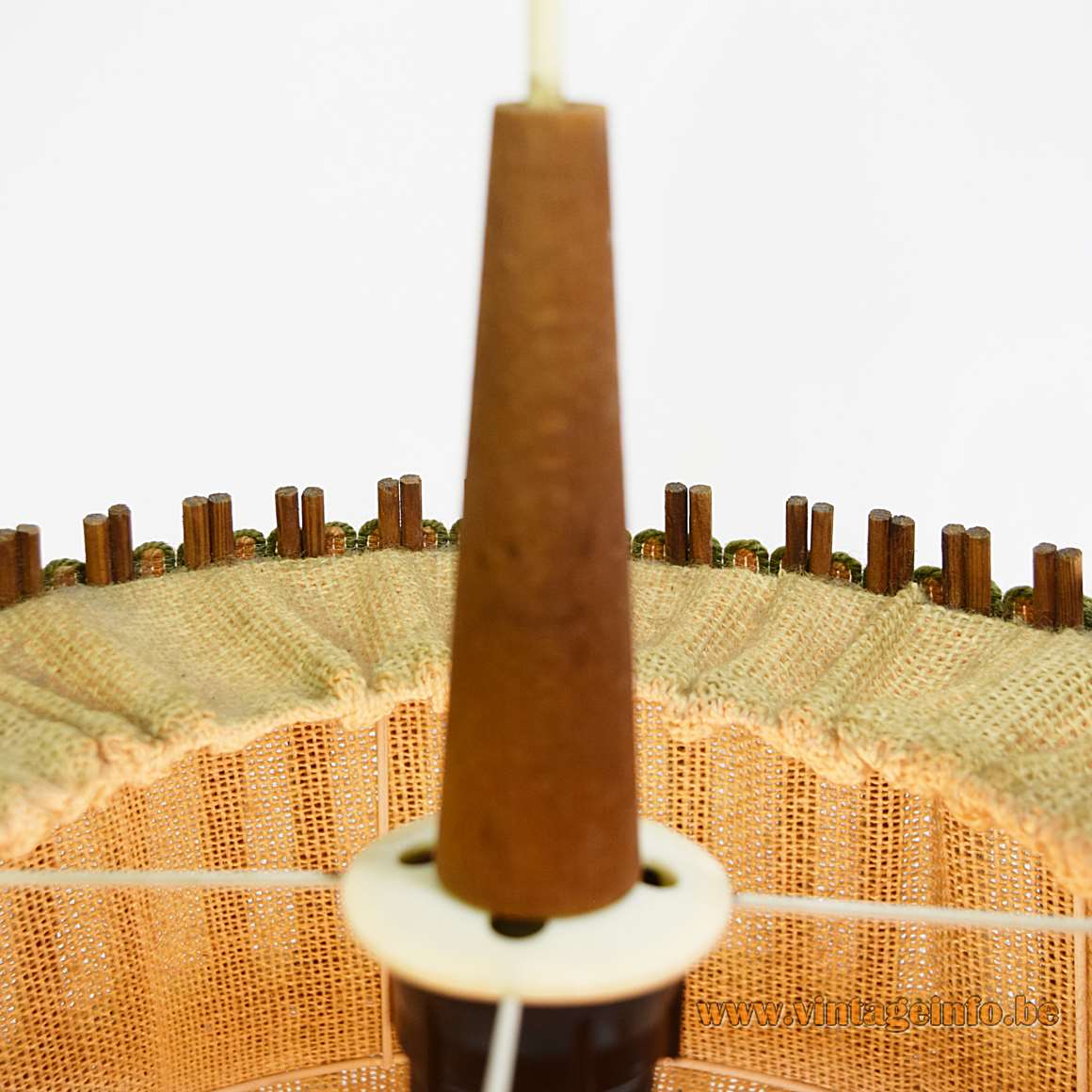 Philips pendant lamps in a catalogue from 1968 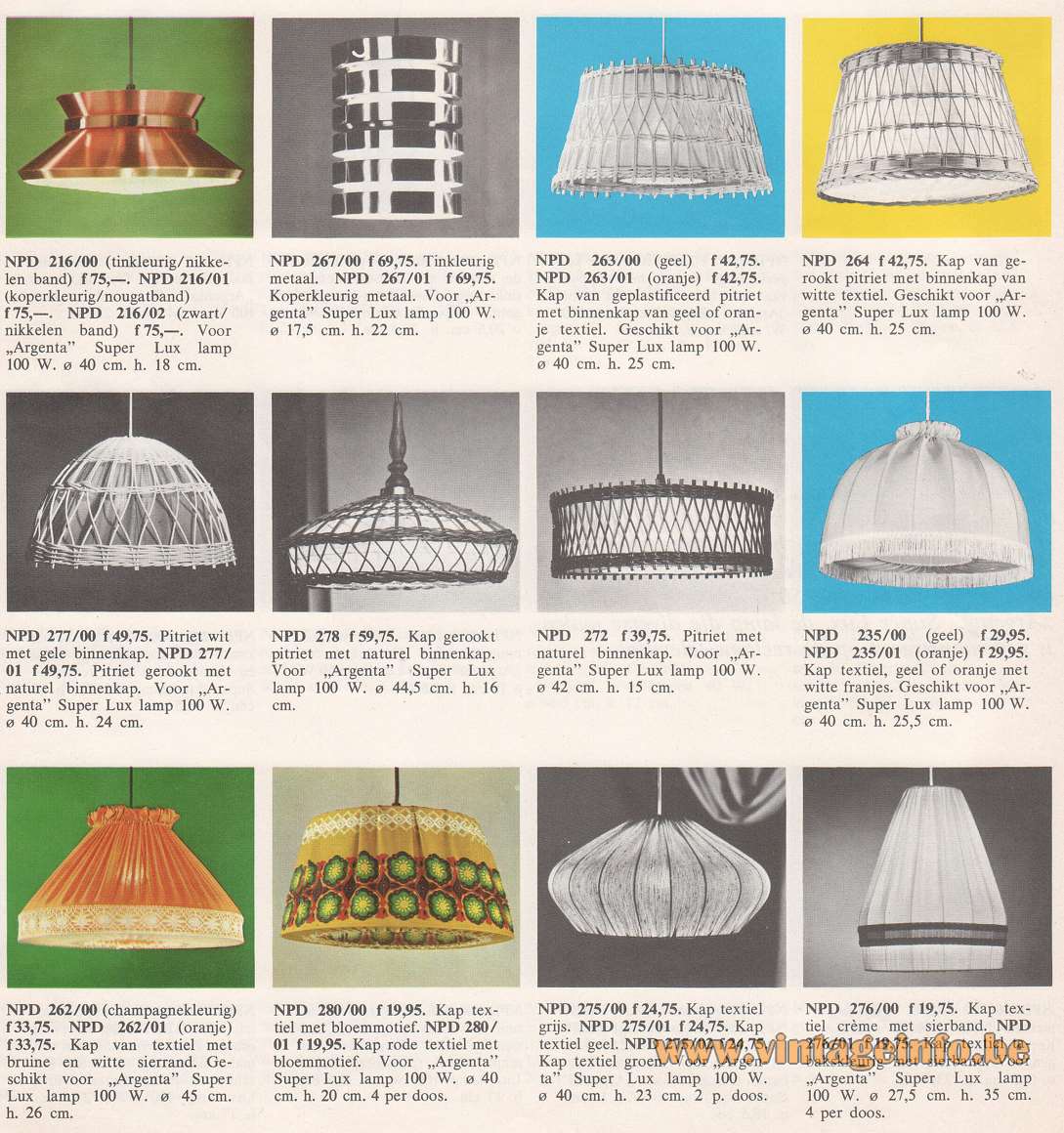 Philips pendant lamp in a catalogue from 1967

Morell pendant lamp by IKEA in a catalogue from the seventies. It was also sold by Massive and produced by Massive. 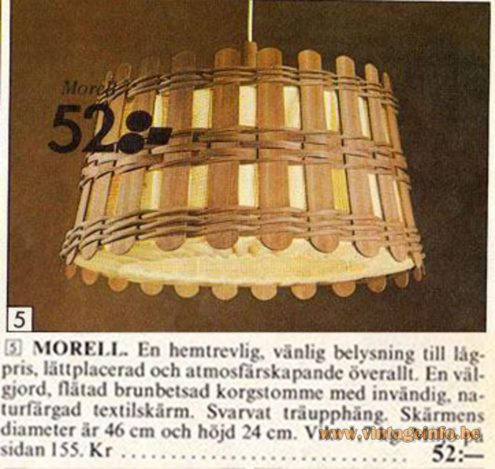 IKEA, formerly known by its full initials, Ingvar Kamprad Elmtaryd Agunnaryd, is a multinational group, headquartered in Delft, The Netherlands, but founded in Älmhult, Sweden in 1943 by then-17-year-old Ingvar Kamprad, born 30 March 1926.

A jute and teak Temde floor lamp was used as a prop in the 2010 French comedy drama film 10 Jours en Or (10 Gold Days). Starring Franck Dubosc, Claude Rich and Mathis Touré. Only the Swiss-German company Temde sold the floor lamps. The other lamp is a fabrication of a pendant lamp and a table lamp, in all probability an Odessa lamp from Le Dauphin, not Philippe Jean, France.

A Temde pendant lamp was used as a prop in the 2018 Israeli-American spy thriller film The Angel. Starring Marwan Kenzari, Toby Kebbell and Sasson Gabai. 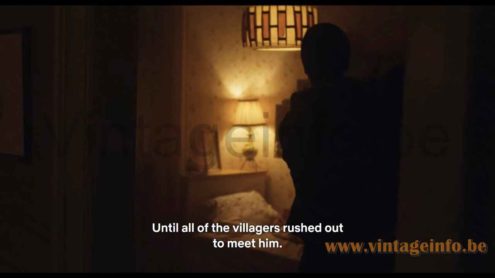 Materials: Round lampshade made of jute and teak sticks. 2 orange and green fabric (wool or cotton) ribbons round the lampshade, on top and bottom. Teak conical tube on top. Bakelite E27 socket.

Other versions: This jute and teak pendant lamp exists in several variations and styles.

Two other lamps in this style by Massive: Jute and pine pendant lamps. They were also sold (or made and also sold by Massive) by the Swiss-German company Temde. Also the Dutch Herda company sold these lamps. 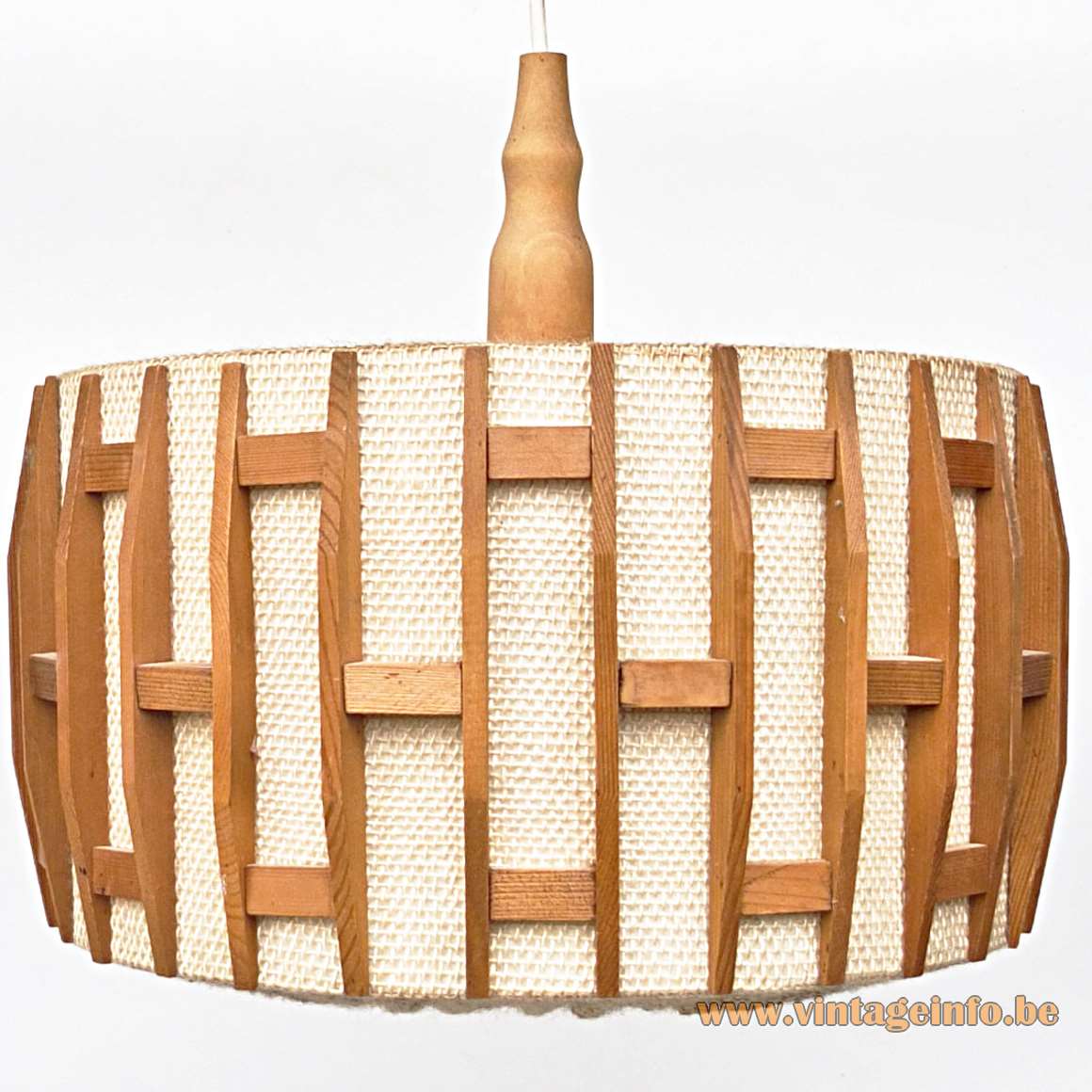 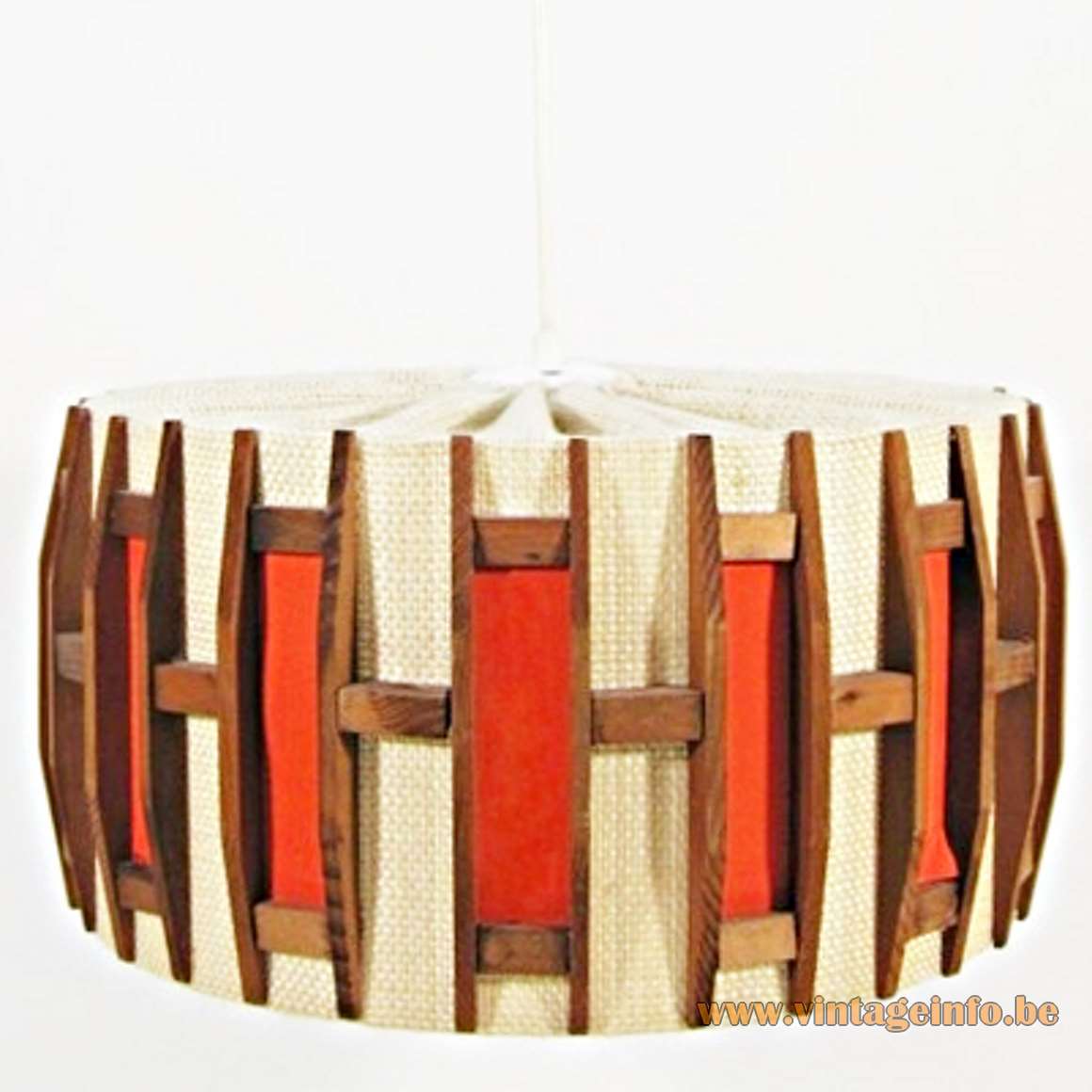 A Massive jute and teak pendant lamp was used as a prop in the 2016 crime drama TV Series Ennemi Public (Public Enemy), made in Belgium. Starring Stéphanie Blanchoud, Jean-Jacques Rausin and Clément Manuel. 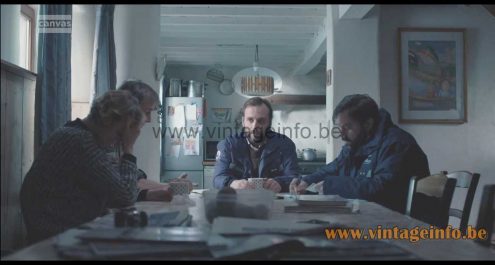 A Massive jute and teak pendant lamp was used as a prop in the 2016 French-Belgian television thriller series Zone Blanche (White zone but named Black spot). Starring Suliane Brahim, Hubert Delattre and Laurent Capelluto. Many other lamps were used as a prop. You can find several of them over here. 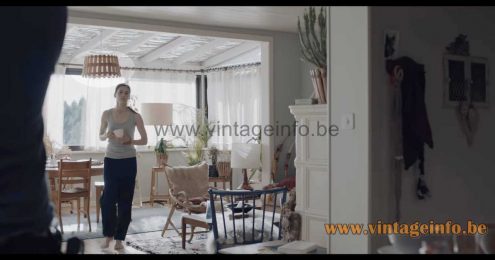 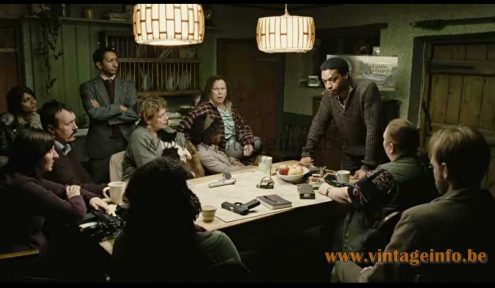 A Massive jute and pine pendant lamp was used as a prop in the 2003 TV series Midsomer Murders S7 E4. Starring John Nettles and Neil Dudgeon. 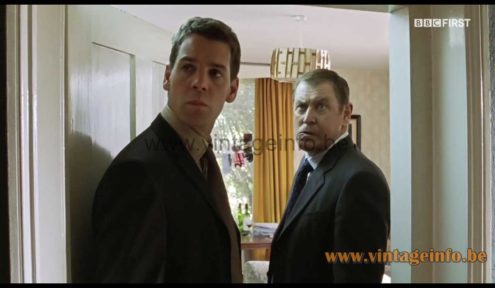 A Temde pendant lamp was used as a prop in the 2021 French film 8 Rue de l’Humanité (Stuck Together). Starring Dany Boon, Liliane Rovère and Yvan Attal. 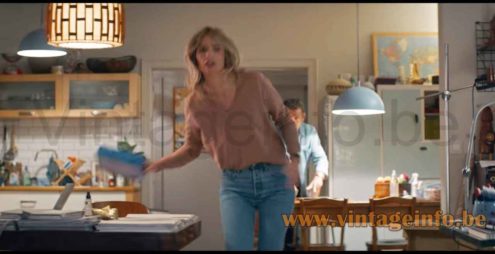