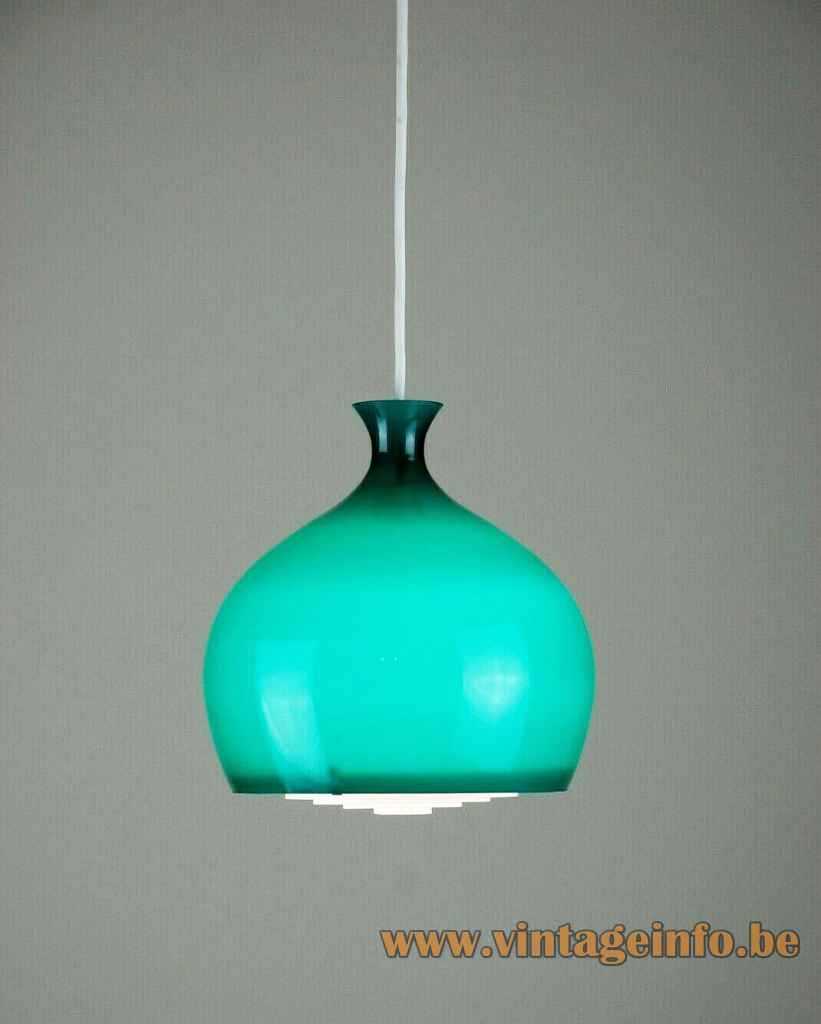 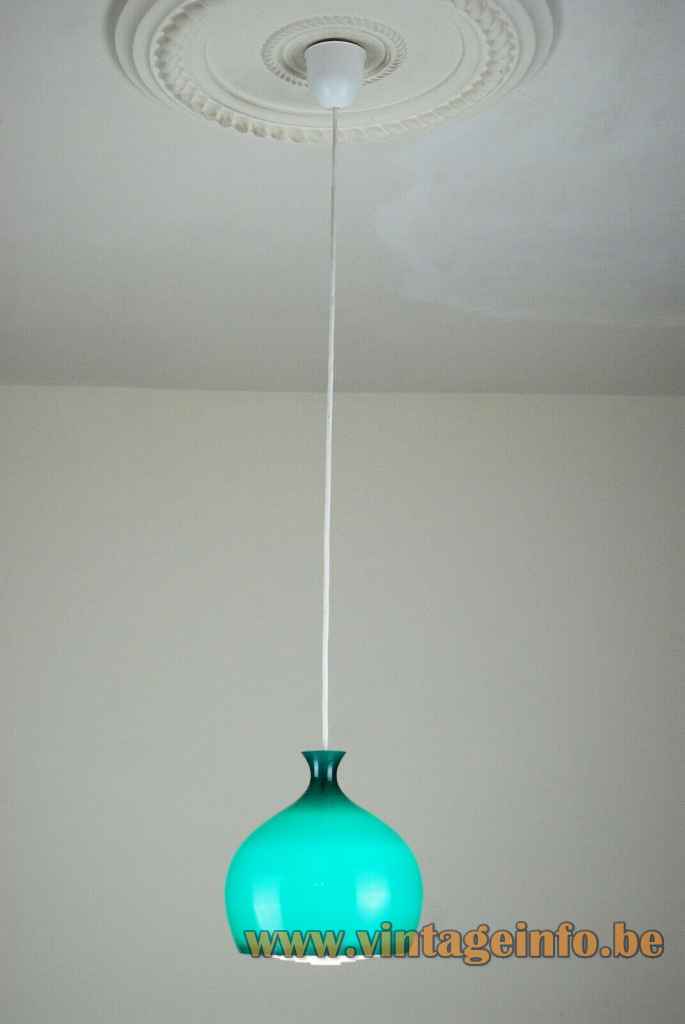 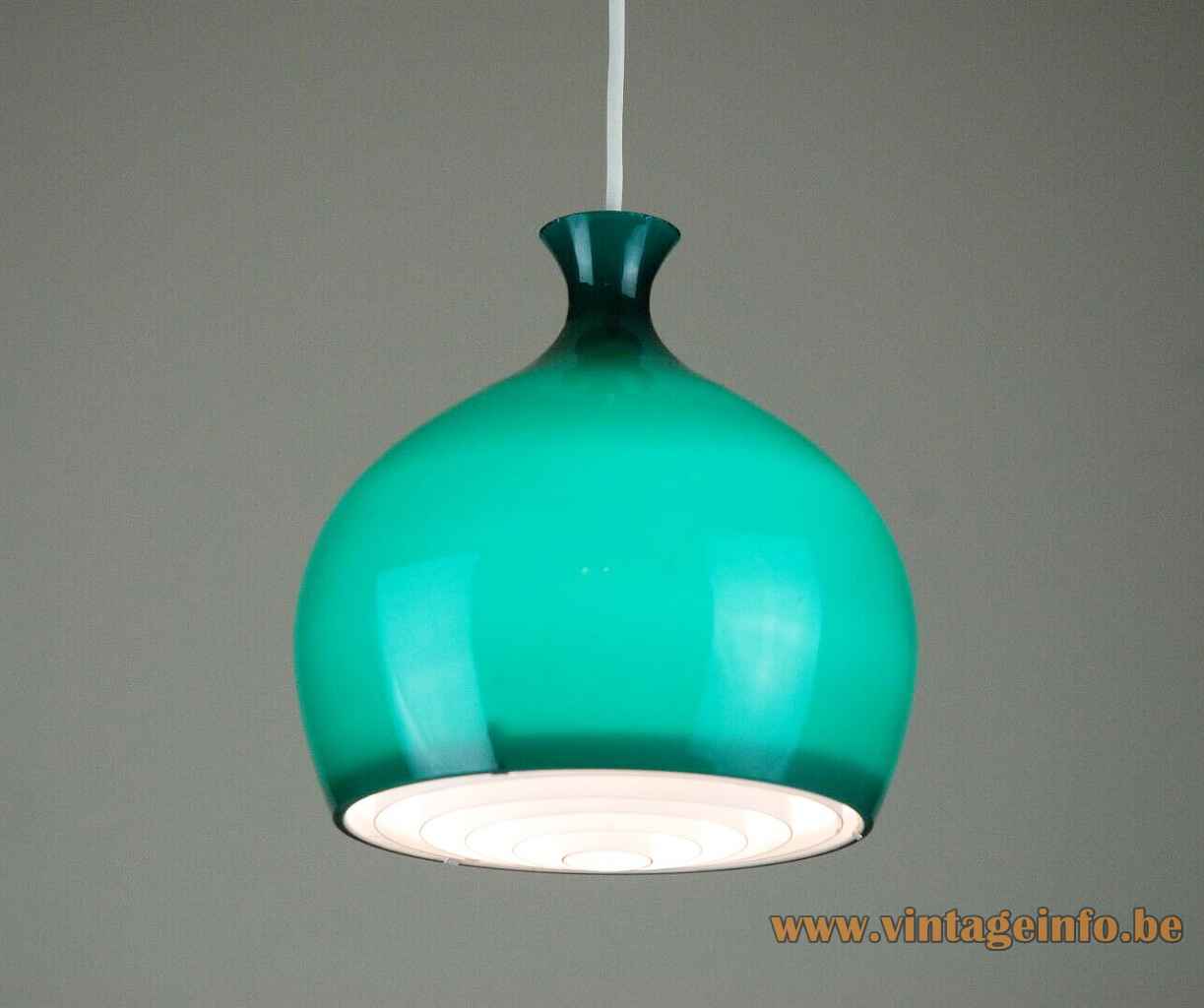 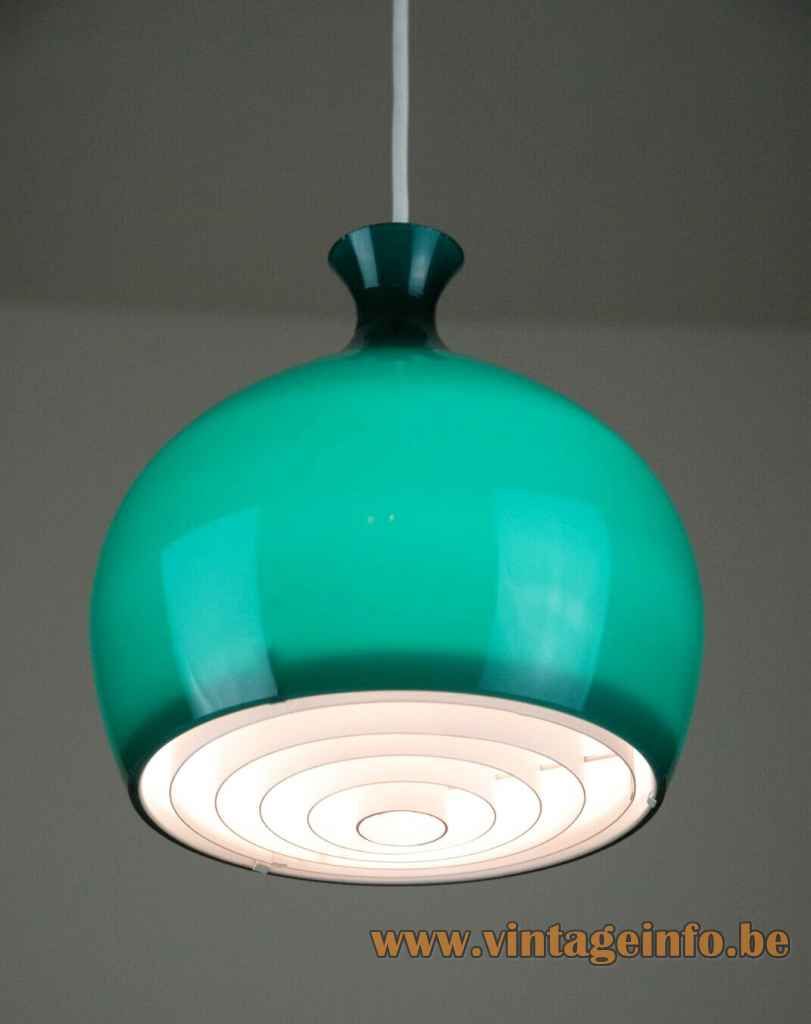 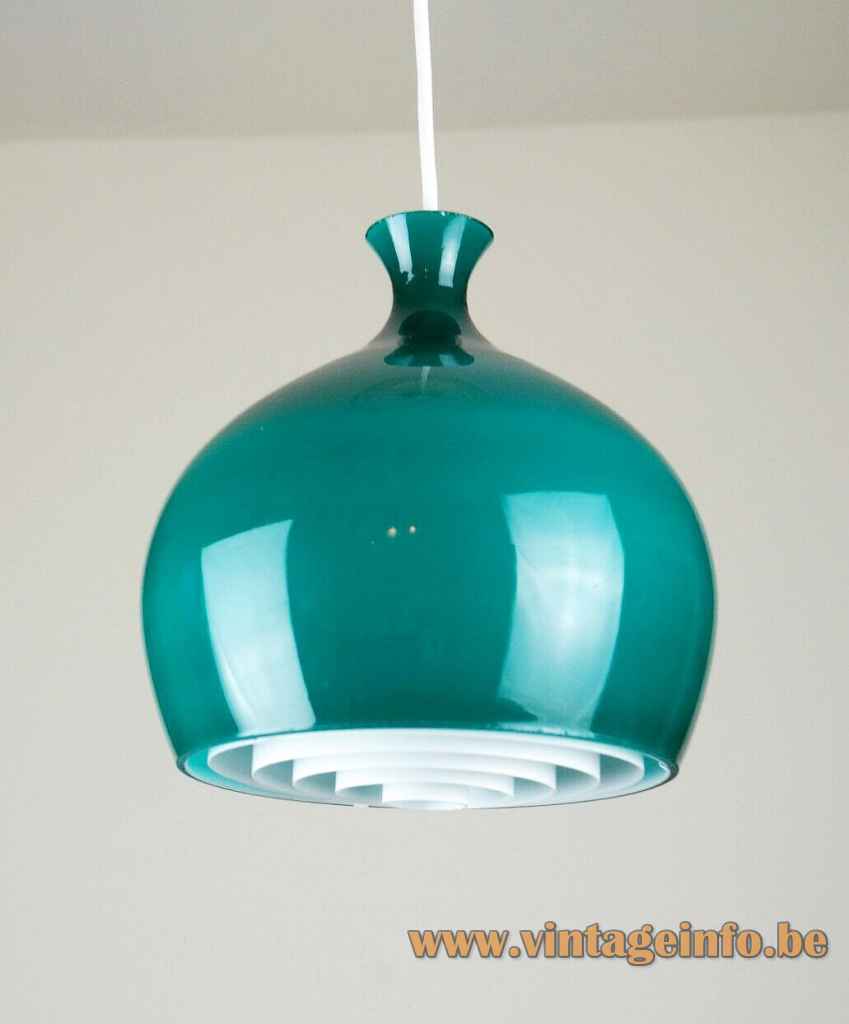 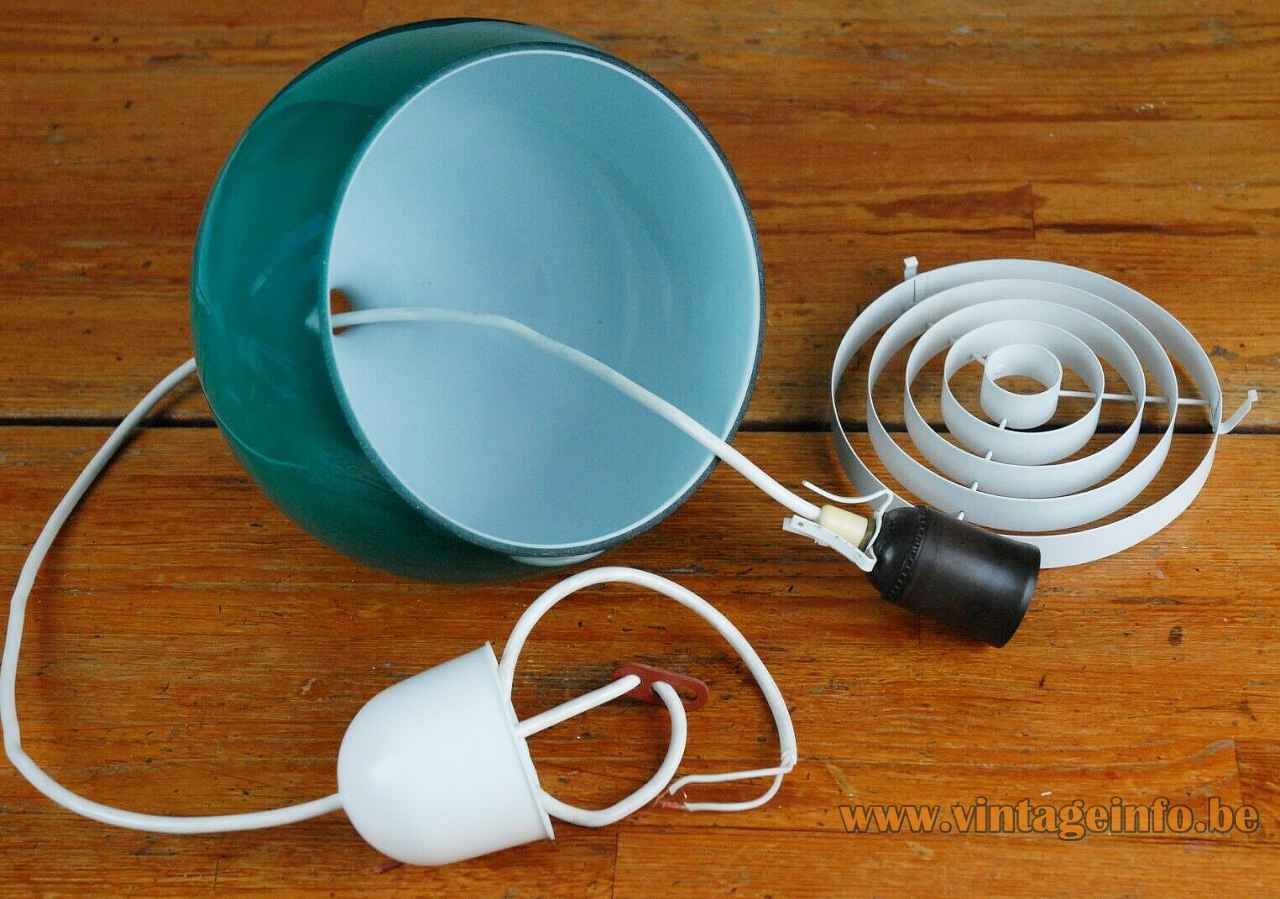 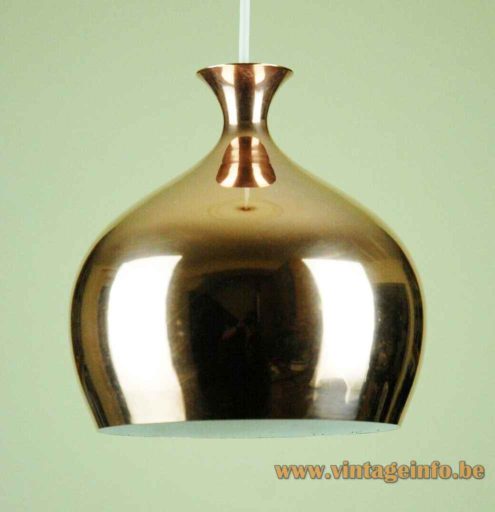 Other versions: This Helge Zimdal Löken pendant lamp exists in several colours. The most common version is in brass.

Often said that the glass of this lamp was made by the Danish company Holmegaard, but I could not find proof for it. Also in Sweden several glass companies existed at that time.

Also said that Helge Zimdal designed this lamp together with Hans-Agne Jakobsson, but also no proof can be found. Do you have an idea? Please let us know through the contact form and help improve the websites exactitude.

Löken is the Swedish word for onions. Lök is onion. So probably the name is Lök, not Löken as everybody says.

Helge Zimdal, originally Zimdahl, was born April 27, 1903 in Alingsås, Sweden. Zimdal graduated from the School of Architecture (Arkitekturskolan på Kungliga tekniska högskolan) at the Royal Institute of Technology in Stockholm in 1927 and from the Stockholm Academy of the Arts (Konsthögskolan) in 1930.

Together with Nils Ahrbom, he ran the architectural firm Ahrbom & Zimdal from 1927 until 1951. The company designed a large number of schools in Stockholm.

The collaboration ended in 1951 when Helge Zimdal became professor of architecture at Chalmers in Gothenburg, were he stayed until 1970. Zimdal passed away, October 3, 2001.

The Fagerhults Belysning (lighting) company was founded by Bertil Svenssons in 1945 after he designed a floor lamp for his mother in 1943.

From a small shed in the backyard the business grew until it was the large company that it is today. In 2018 Fagerhults has about 2600 employees in approximately 20 countries around the world. The factory remained at the same location, but has now been extended about 40 times. Production facilities are also located in Great Britain, Australia and China.

In 2007 Fagerhults was awarded the Red dot design award.

Philips from The Netherlands sold a very similar one, as you can see. It is the NG 70 with slight differences. 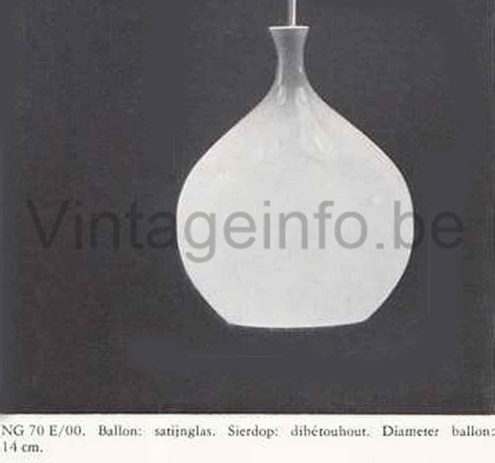