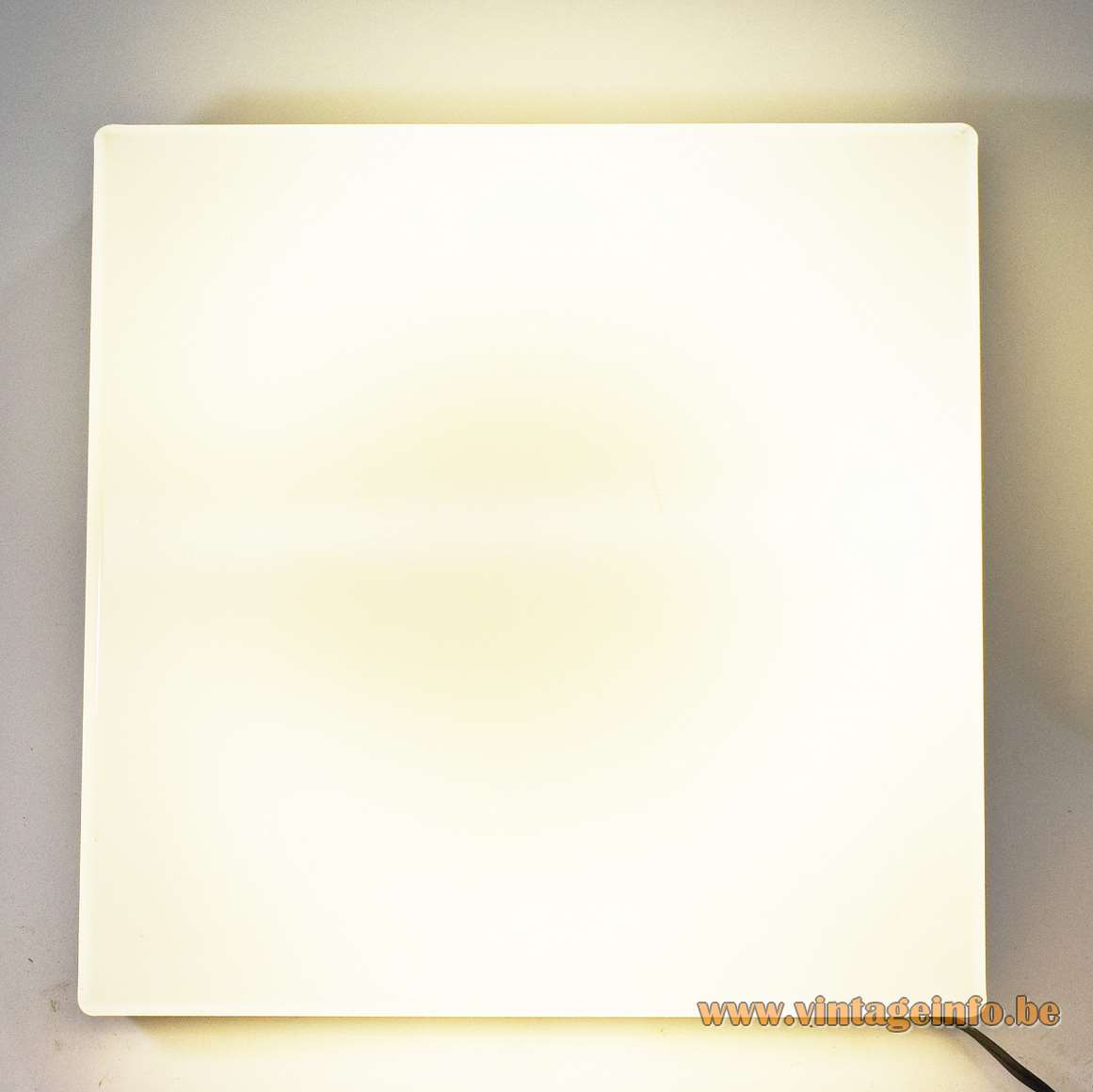 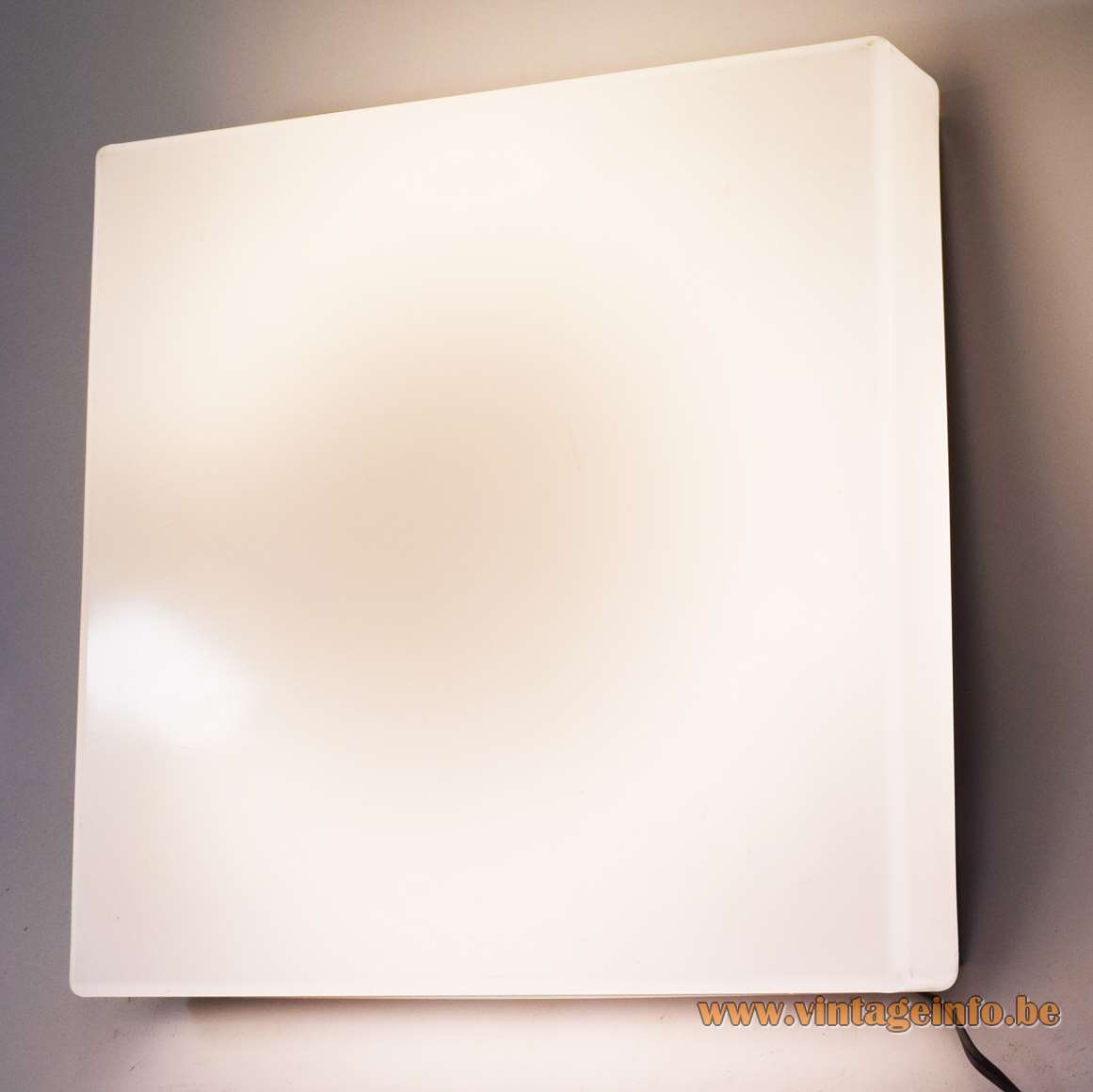 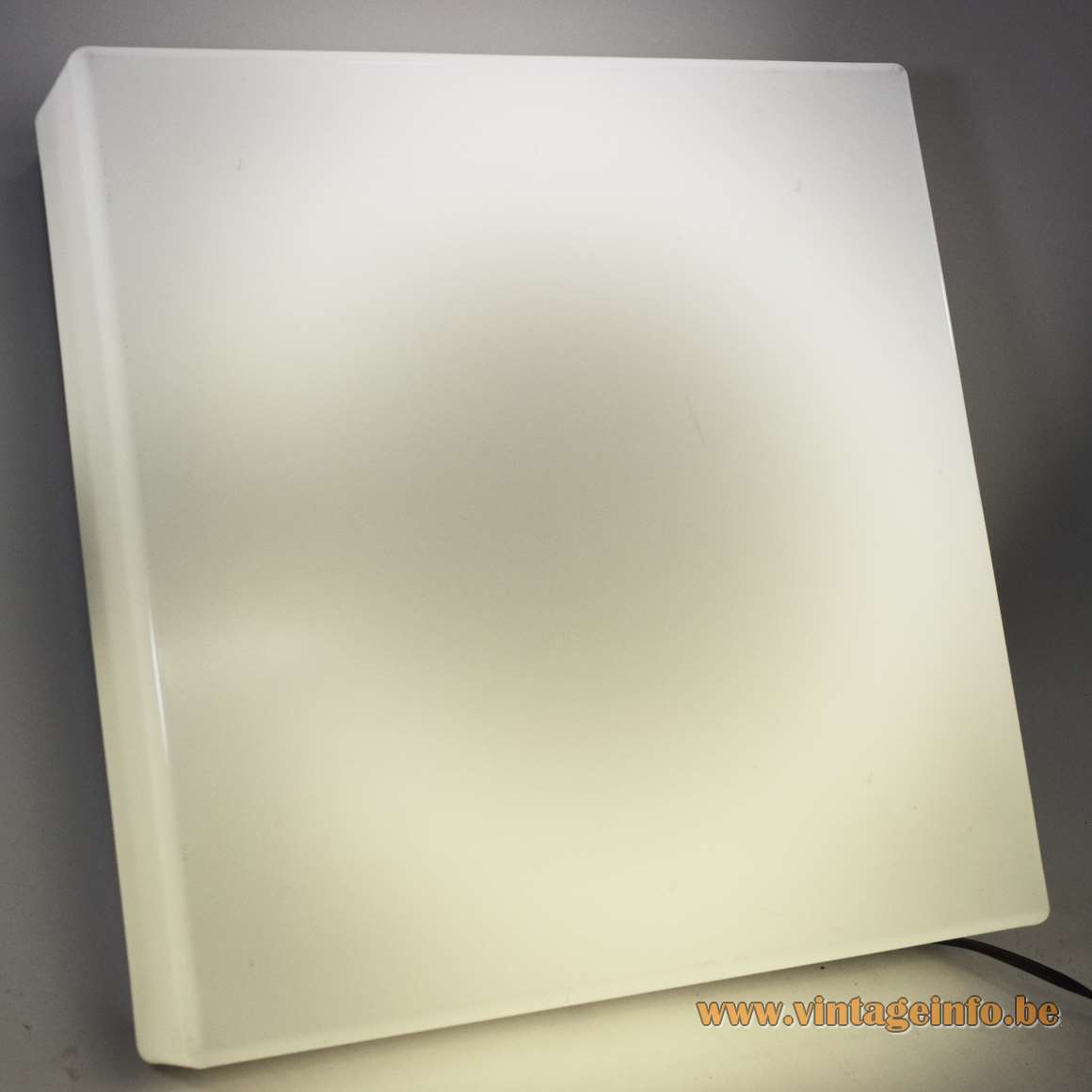 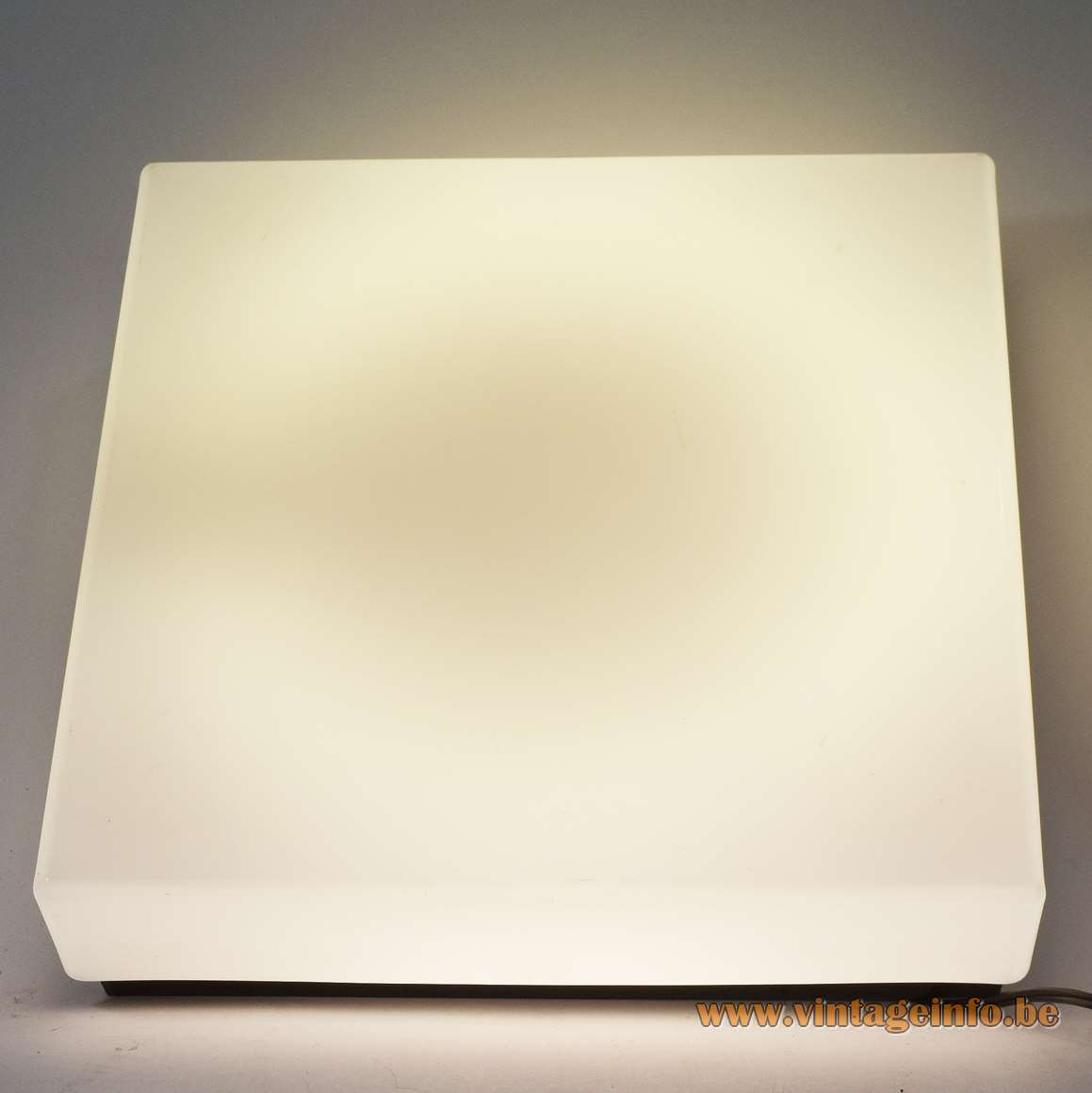 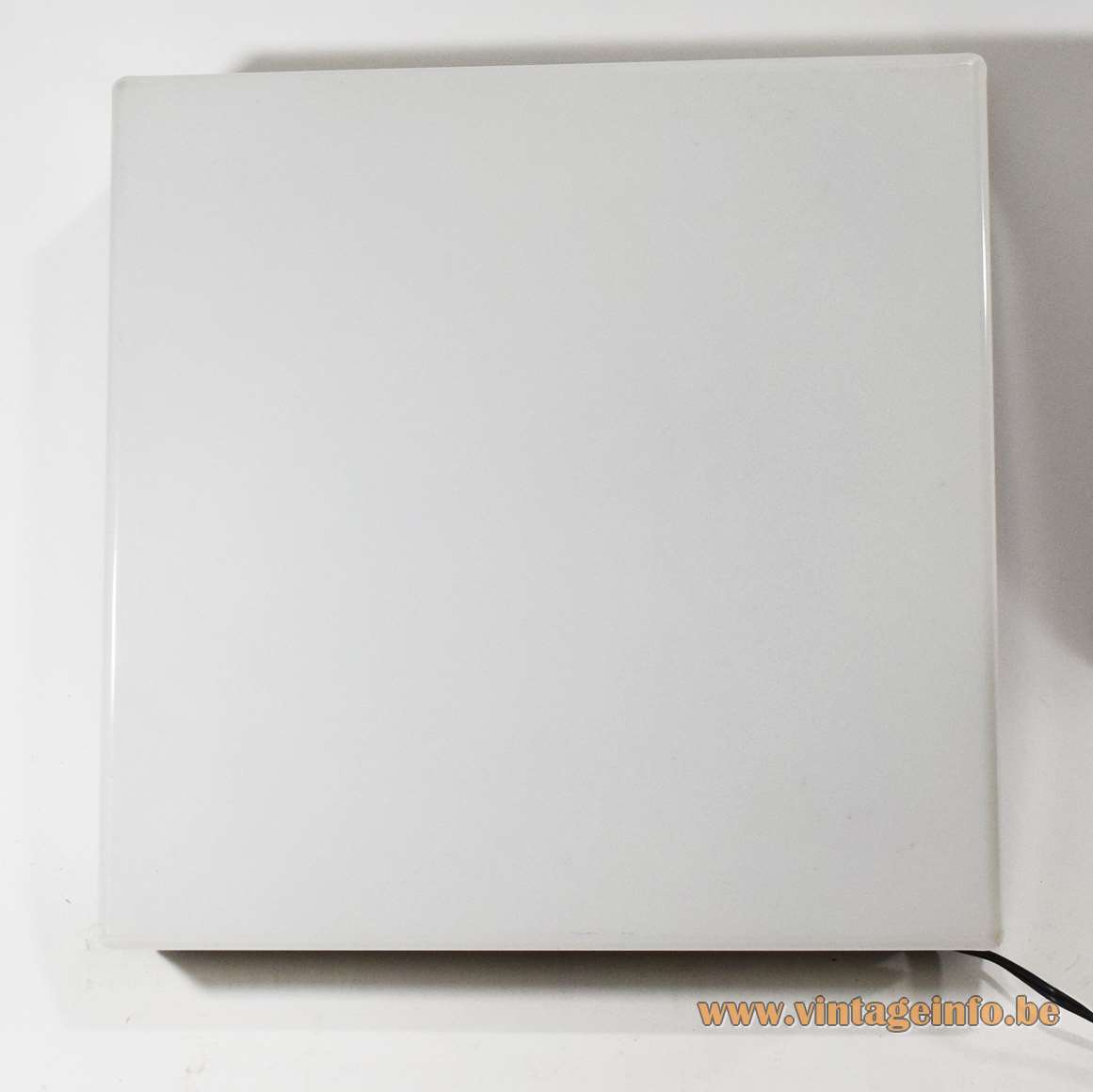 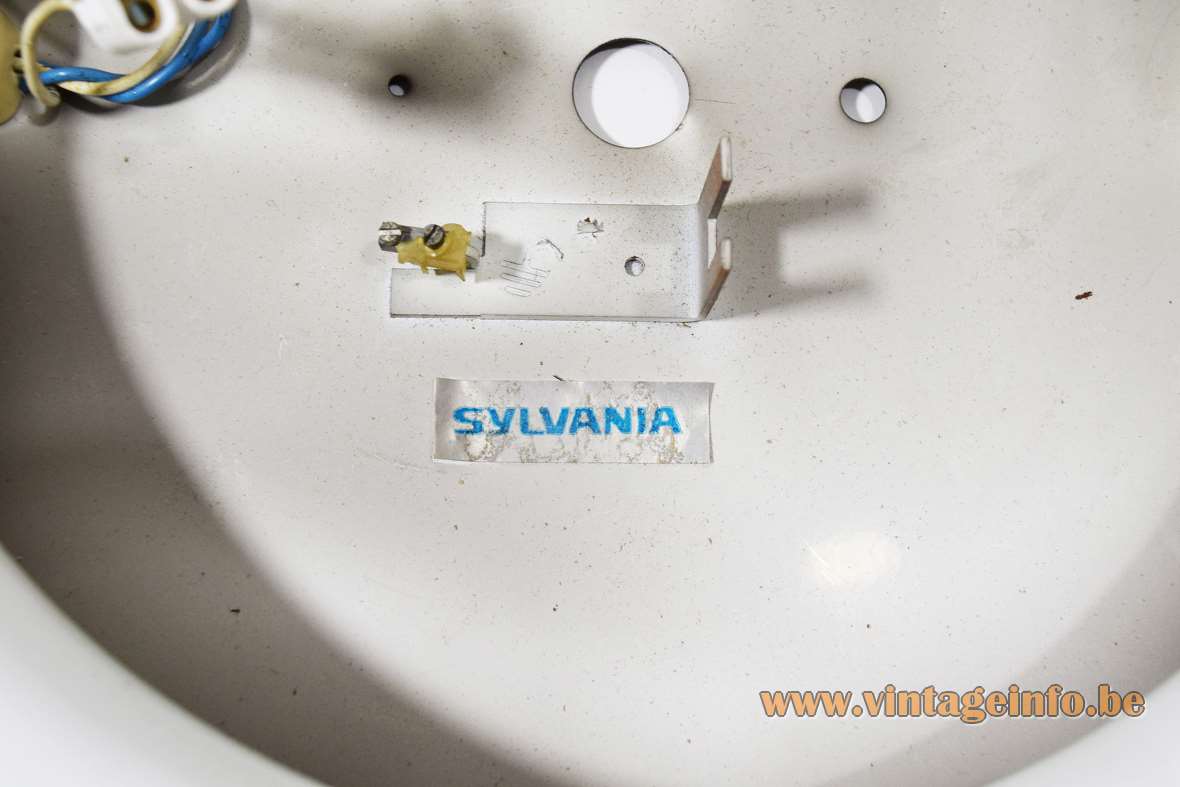 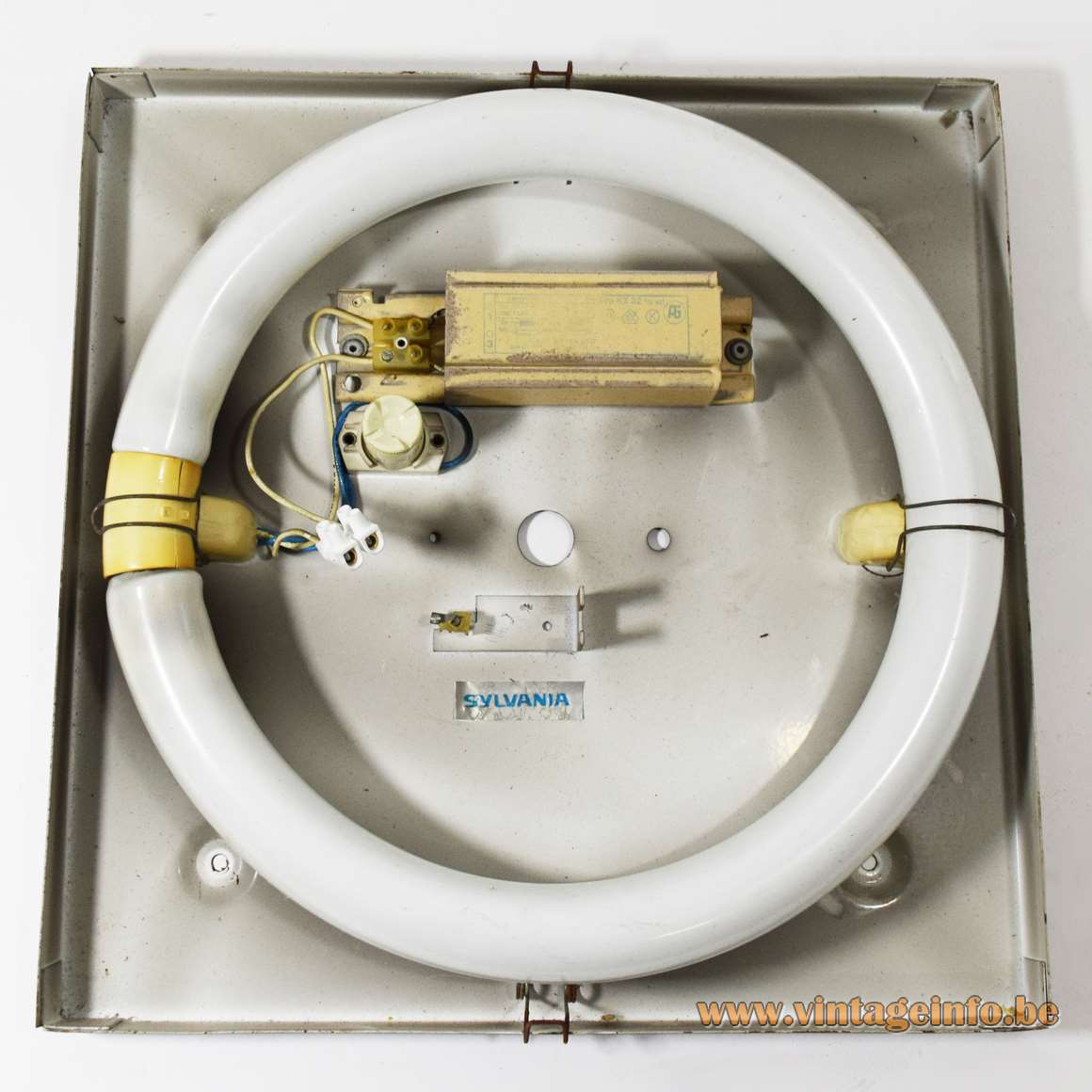 Other lamps with circular fluorescent tubes

Other versions: The SYLVANIA square acrylic flush mount exists in several forms and sizes and is made in some variations. It also exists in a round version. Flush mounts or wall lamps like this one were already been made since the 1960s. Not much was changed over the years. This one is from the early 1990s, it still has West-Germany printed on the choke ballast made by May & Christe GmbH.

SYLVANIA had its beginnings in 1901 in Middleton, Massachusetts, USA, Frank A. Poor purchased a half-interest in Merritt Manufacturing Company, a small firm which refilled burned-out light bulbs. Later, Poor bought out his partner and moved the plant to Danvers, also in Massachusetts, changing the name of the company to Bay State Lamp Company.

In 1909, Poor formed Hygrade Lamp Company to sell new incandescent lamps made by Bay State. Meanwhile, Novelty Incandescent Lamp Company had been organized in 1905 at St. Marys, Pennsylvania. One year later Novelty opened a new plant in Emporium, Pennsylvania, which attracted the attention of General Motors. General Motors purchased control of Novelty in 1910 and hired Bernard G. Erskine to head the operation.

By 1916, Hygrade in Massachusetts had discontinued filling burned-out lamps, and moved to larger quarters in Salem, Massachusetts. In 1922, Erskine and two other men bought the Novelty Lamp Company and created the Nilco Lamp Works. Lamp production was located at the St. Marys, Pennsylvania, plant.

In 1931, Nilco, SYLVANIA and Hygrade merged to form Hygrade SYLVANIA Corporation. The new firm’s plants were soon producing 90,000 lamps and 50,000 radio tubes each day. By 1932, the first research on fluorescent lamps had been started. It continued through the 1930s. The end of the decade saw the advent of the first fluorescent lamps, which were produced in a linear shape. The new lamp was a major breakthrough in lighting technology, producing much more light per watt consumed and lasting much longer than the incandescent.

Public interest rose when the fluorescent was first exhibited at the 1939 New York World’s Fair. Unfortunately, no lighting fixtures were commercially available for the new lighting source, so in 1940, SYLVANIA opened the world’s first fluorescent fixture plant in Ipswich, Massachusetts. A year later, in Danvers, Massachusetts, the company opened what was then the world’s largest fluorescent lamp factory.

After a long period of expansion during and after World War II, SYLVANIA Electric was acquired in 1959 by General Telephone, who wanted a strong manufacturing subsidiary to fuel the expansion of the telephone business.

In 1971, the company’s name was changed to GTE SYLVANIA Incorporated. Its parent, General Telephone & Electronics Corporation, reorganized its manufacturing operations into the GTE Products Corporation, creating five worldwide business groups. GTE Lighting Products was one of them.

GTE Electrical Products was formed in 1980 and GTE‘s lighting business was made part of that group. In early 1993, OSRAM GmbH from Germany purchased GTE‘s North American lighting and related precision materials operations and OSRAM SYLVANIA INC. was formed.

During the summer of 2016 LEDVANCE was launched as an independent company when it separated from OSRAM. In 2017, LEDVANCE has been sold to a Chinese consortium consisting of the investor IDG Capital, the Chinese lighting company MLS Co., Ltd. and the financial investor Yiwu State-Owned Assets Operation Center.

May & Christe GmbH produced the choke ballast. The company was founded in 1955, and it is owned by OSRAM.