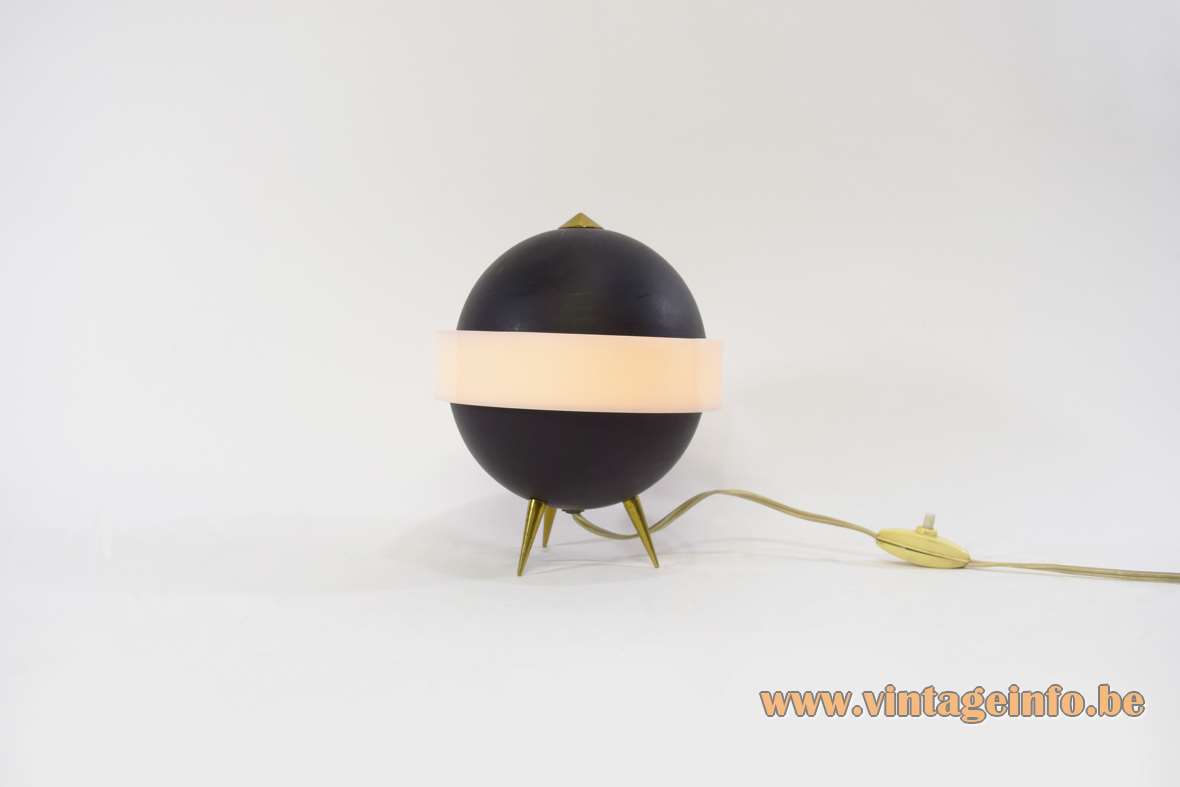 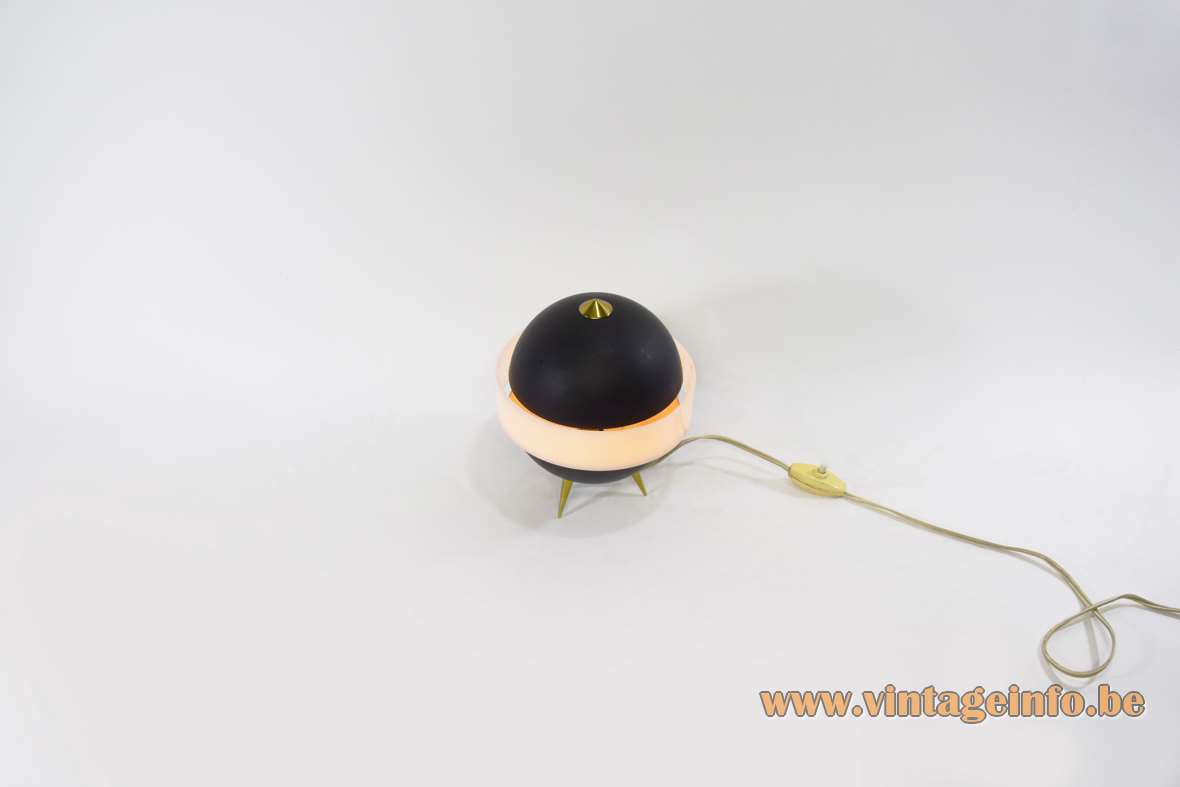 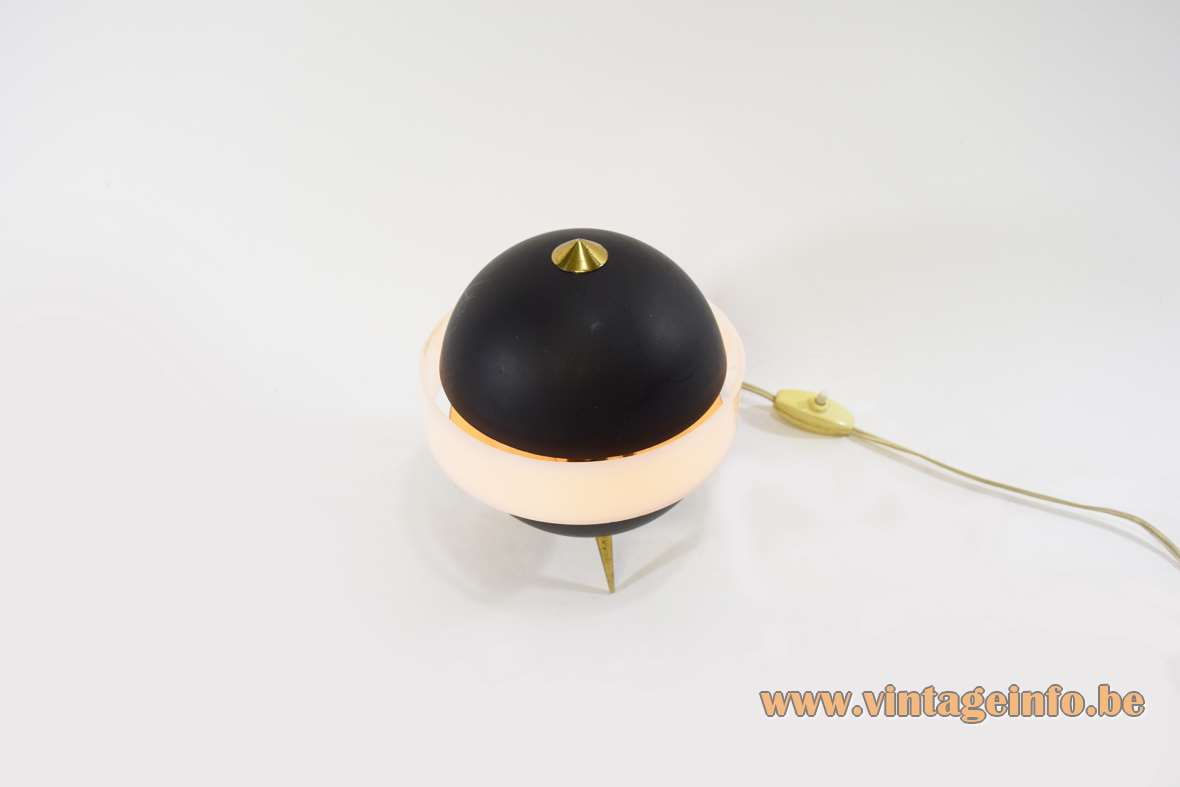 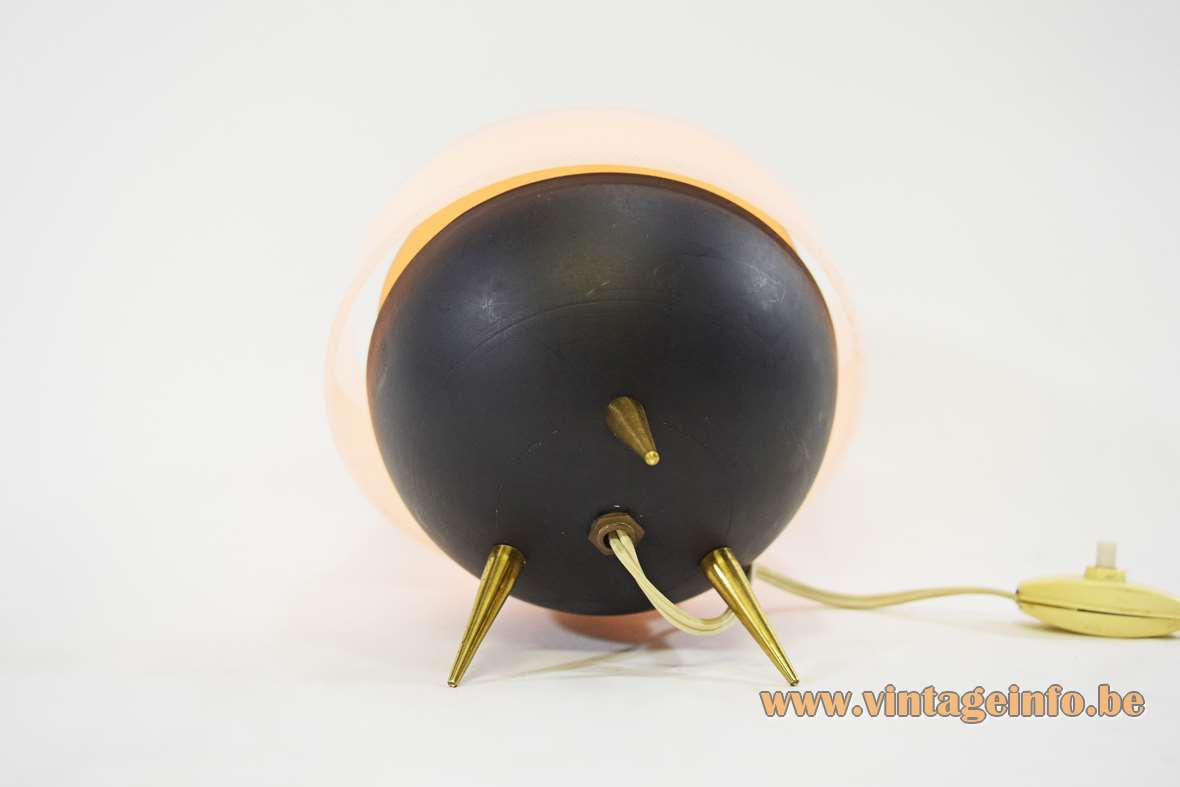 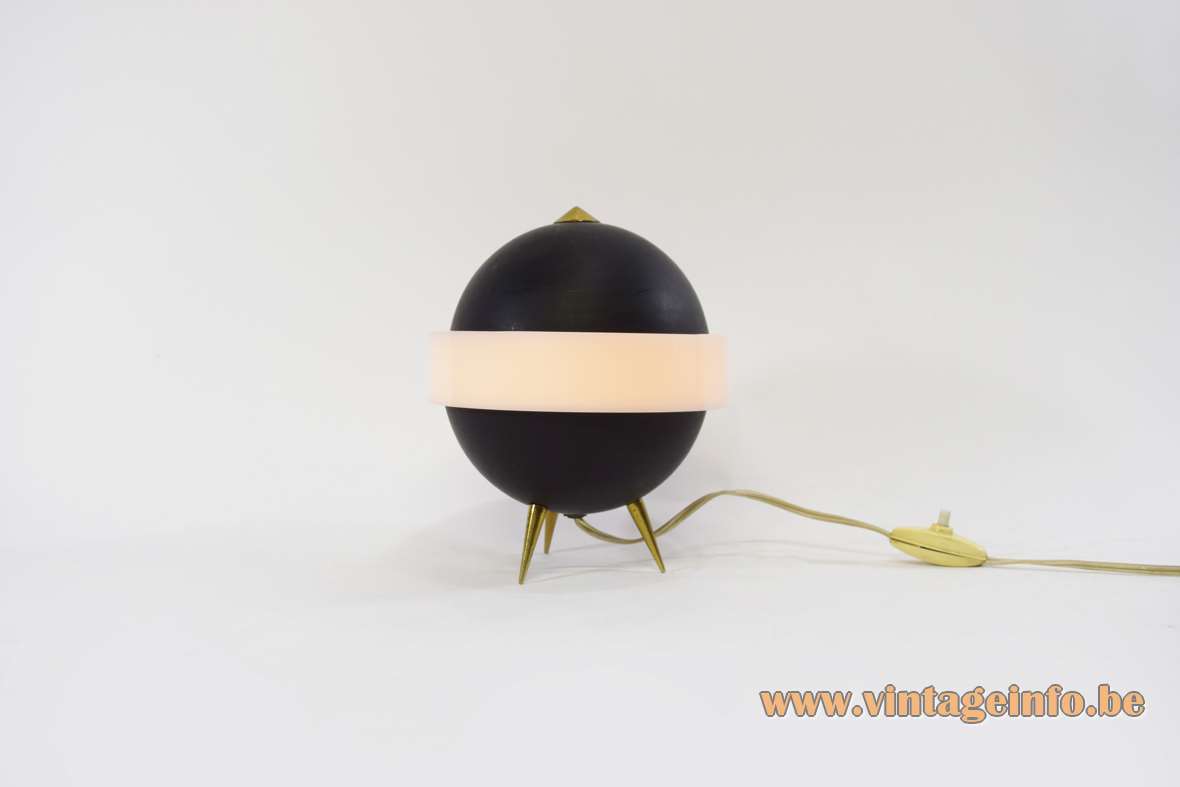 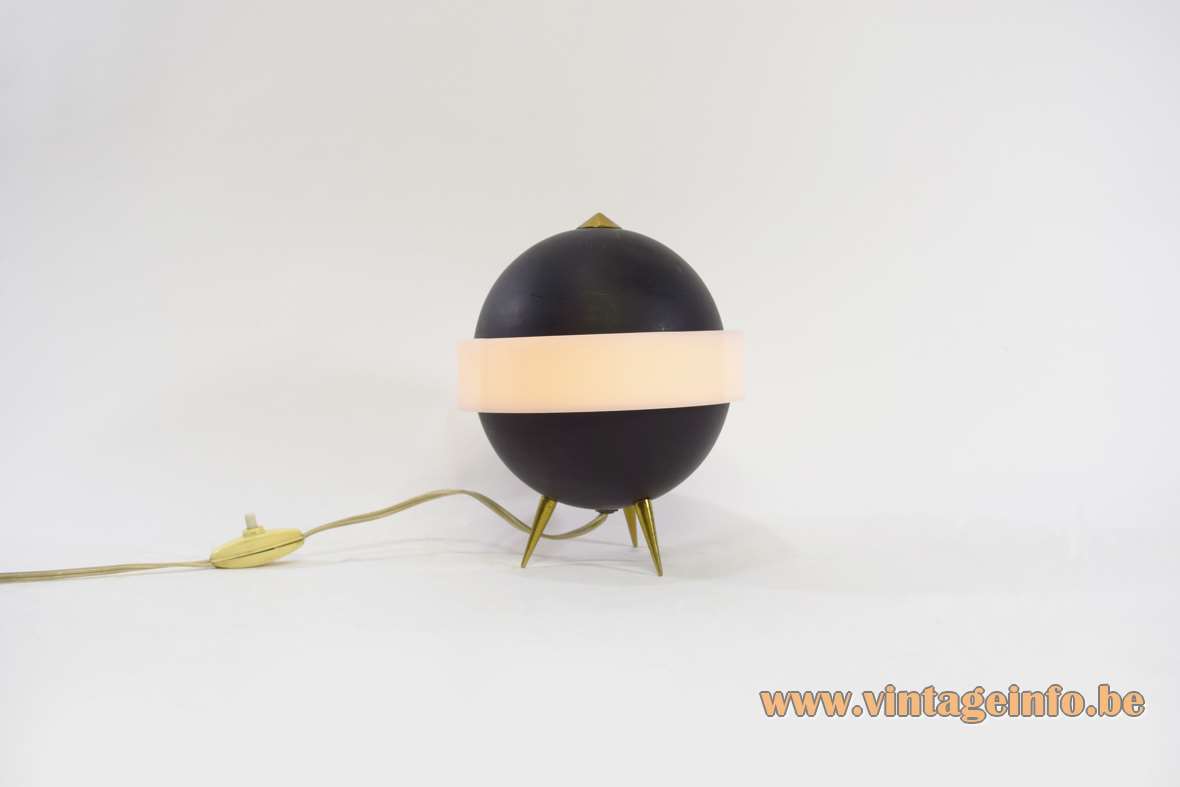 Other lamps with parts of A.A.G. Stucchi

Many thanks to Giuliana from Esperia for all the information.

This lamp is mostly described as a lamp made by Stilux, but you also find it as the “Lumino” lamp designed by Angelo Brotto and made by Esperia.


Other versions: A few versions of this Saturn tripod table lamp exists. They were probably made by several different companies. A versions was made with a white metal ring instead of an acrylic one. Described as a lamp made by Lumen, Italy. They also have straight legs instead of conical, and no brass top. Lumen and Lumino…. Coincidence?

The Esperia company was founded in 1952, with the aim of producing chandeliers, table lamps, wall lamps, floor lamps, ceiling lights, wall light panels and furniture. Esperia is famous for the Quasar lamp from the 60s and 70s, designed by the Venetian designer professor Angelo Brotto. Brotto designed many beautiful lamps for Esperia in that period. The Esperia company still exists and they produce very beautiful lighting.

According to Esperia it could be a lamp that was produced by them. But it does not appear in their archives or in any catalogue. “This lamp could be Esperia because the style, the details, the thread and the switch are very similar to our productions. However, in the 50s and 60s many companies did this style of lamps, called ‘for television’ “, thus Esperia.

A lamp to put on your black and white TV to provide some contrast in the, at that time, dark living rooms. It was intended to reduce the fatigue of the eyes, because everybody was watching television in the dark. All the other lamps had bright light bulbs and there were few electrical outlets in houses. Today it is an ideal bedside or table lamp.

The Lumen company from Milan, Italy no longer exists. It was a company active in the 1950s and 1960s.

The plug, switch and socket of this lamp were made by the A.A.G. Stucchi company from the north of Italy, some 50 km (31 miles) from the capital of all Italian lights: Milan. Stilux was one of those companies that used electric parts of A.A.G. Stuchi.

A.A.G. Stucchi was founded in 1944 and was first named Electra. In 1950 the name changed into A.A.G. Stucchi. The company’s founding members are Aristide,Arturo and Giuseppe Stucchi. A.A.G. Stucchi is located in the city of Olginate, Lecco, Italy. 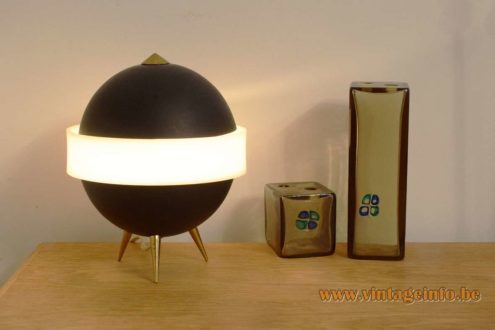