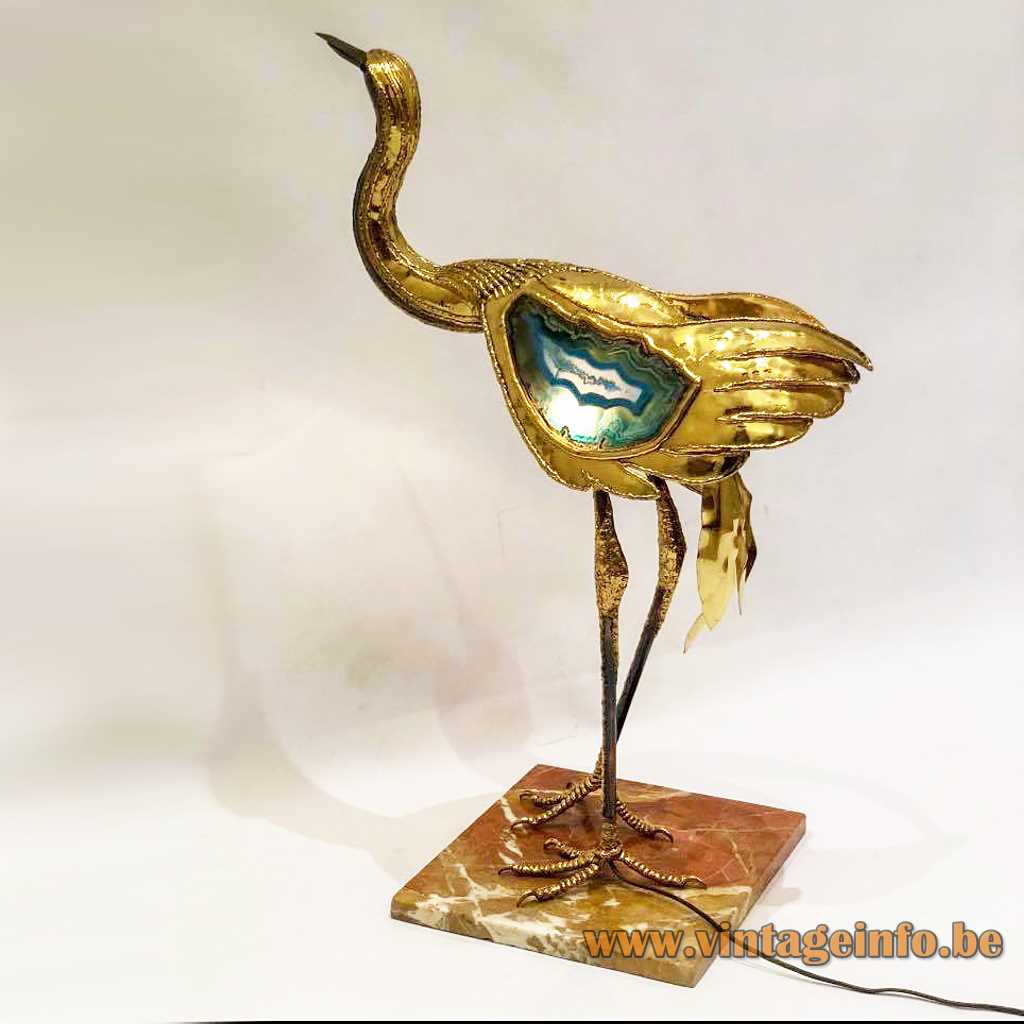 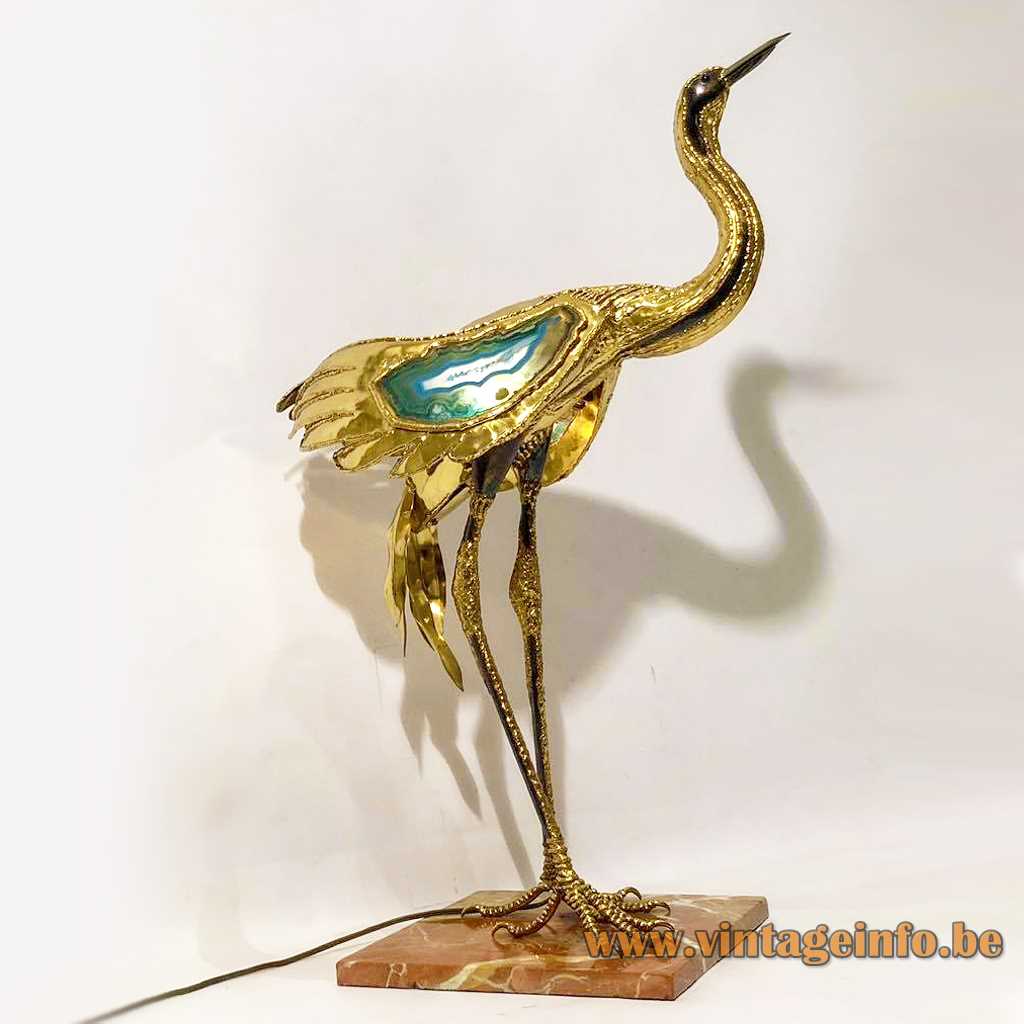 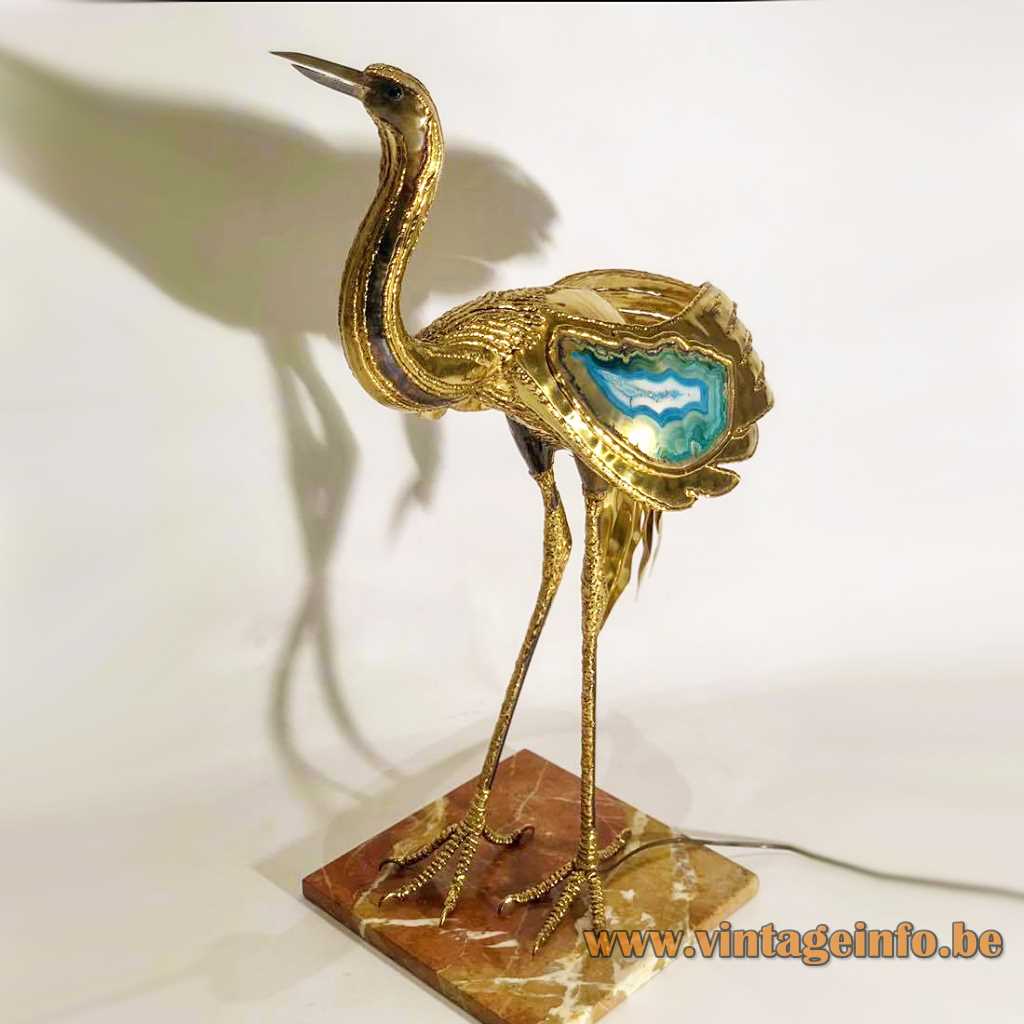 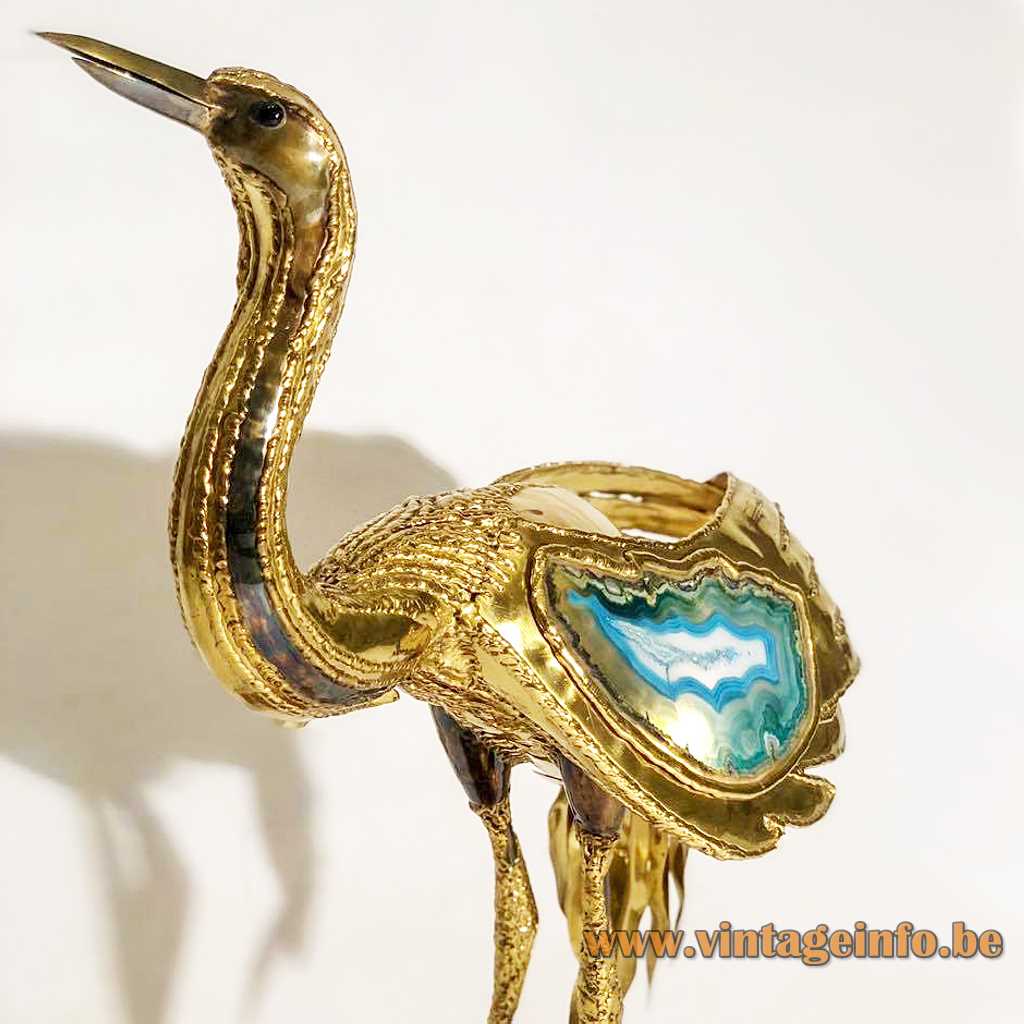 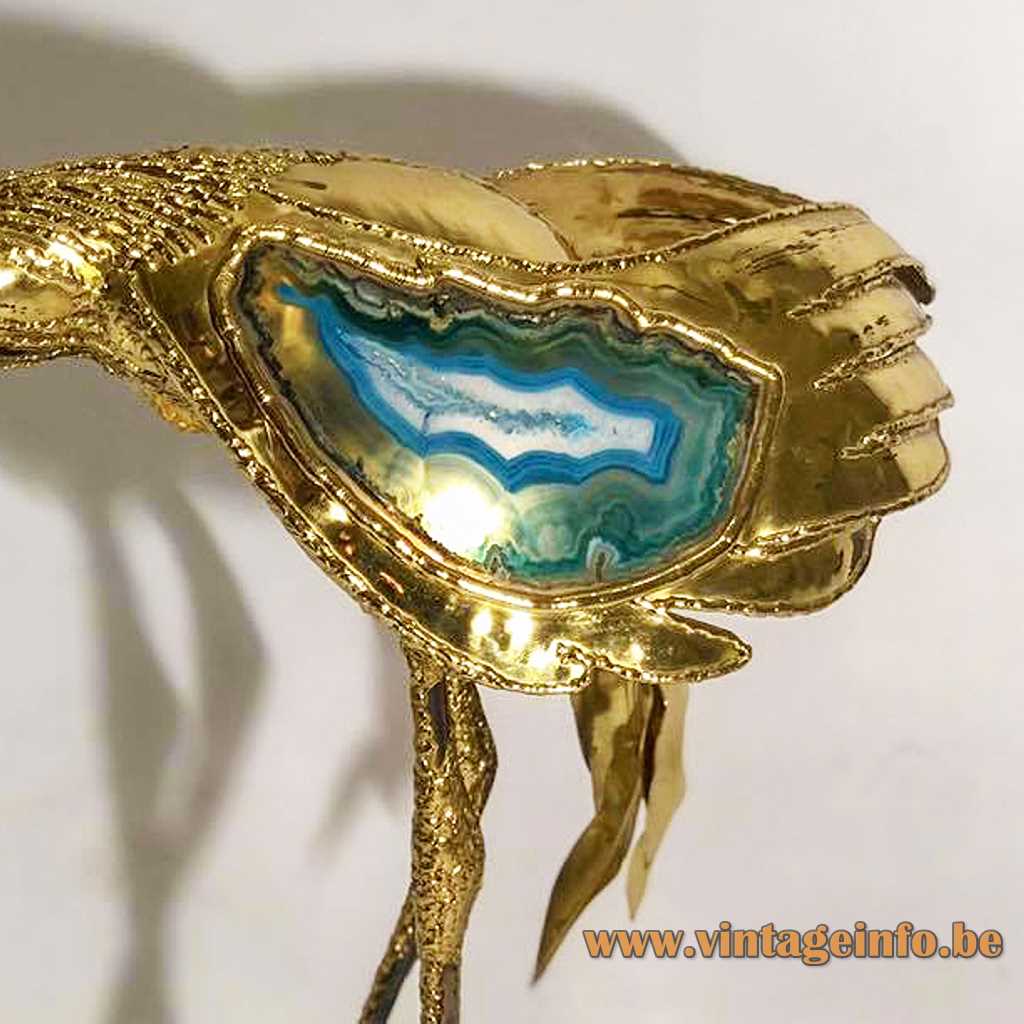 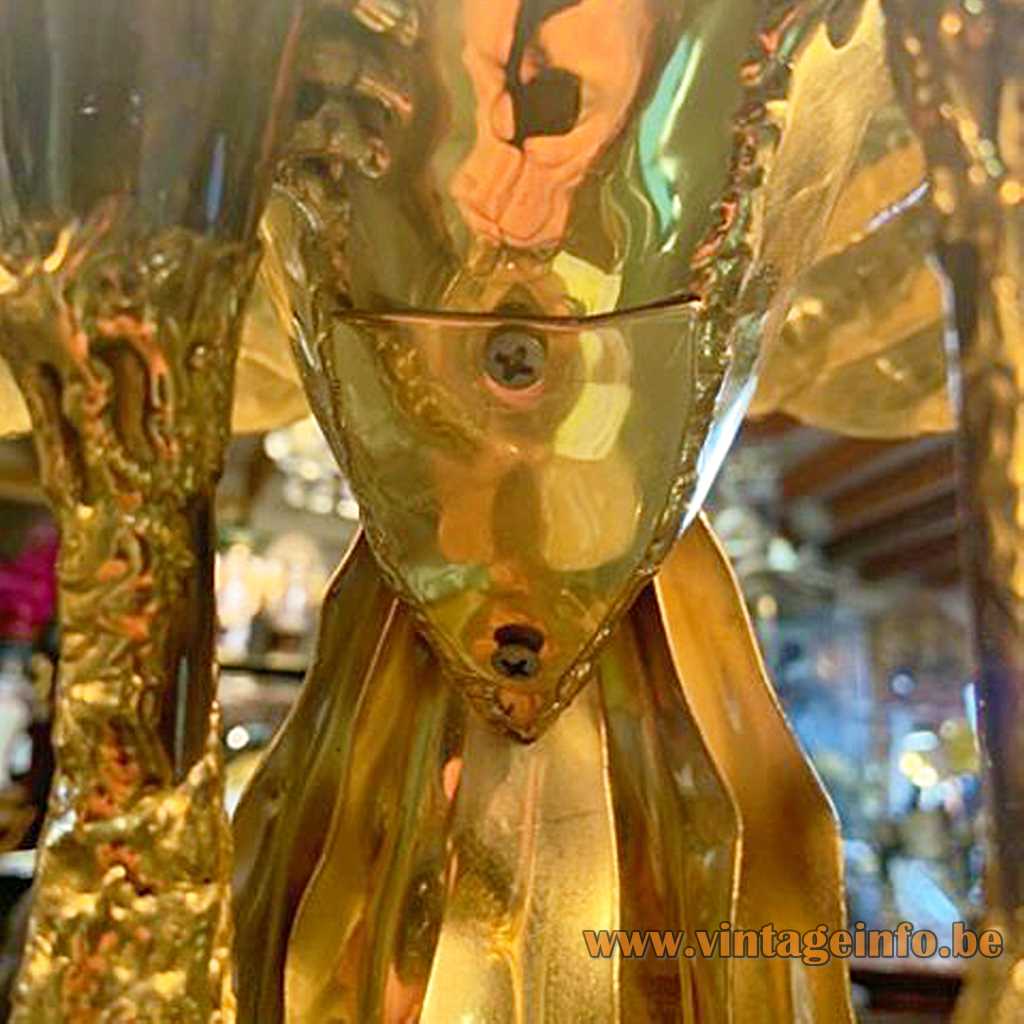 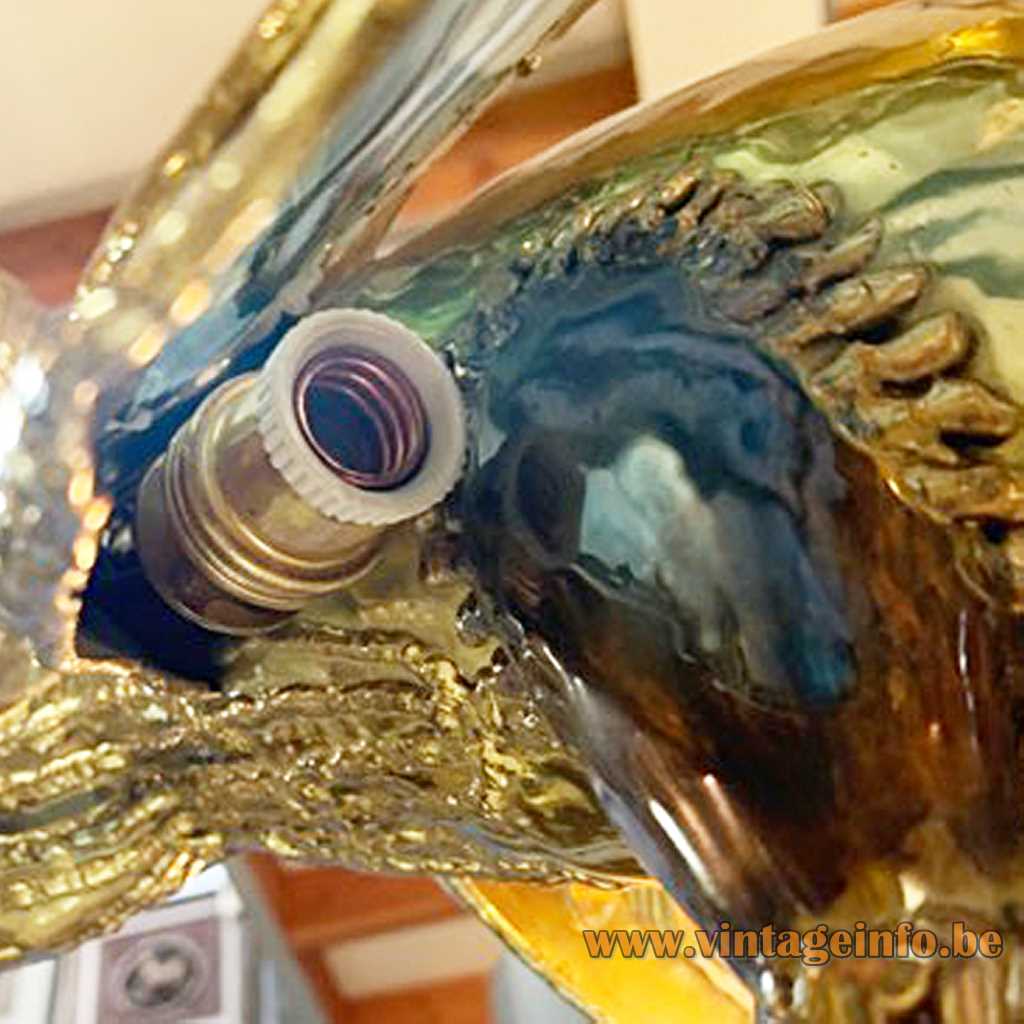 Other lamps with minerals

Many thanks to Nicolas from Troc.Com in Herent, Belgium. You can find the Troc Facebook page over here.

Other versions: This Henri Fernandez crane lamp exists in e few variations. None of these lamps are the same, they are all unique. This crane lamp can be used as a table or floor lamp.

Henri Fernandez, born in 1946, is a French sculptor. After studying metallurgy, he began a profession of milling turner, then turned to sculpture, which he learned as an autodidact. His creations are unique pieces made by hand. He combines steel, copper, brass and minerals, such as agate or amethyst. He prefers cold materials to give them a shine and beauty that is unusual with monumental and realistic decorative objects. Fernandez works quickly with big names in French sculpture like Alain Chervet or Jacques Duval Brasseur.

Henri Fernandez designed furniture and lighting for the companies Jacques Duval-Brasseur and Maison Honoré. Sometimes his works are signed, often not, but his style is undeniable. He always used materials like brass, agate and other precious stones. Often animals and plants were created. His favorites were insects and snakes. As many artists at that time he also made several palm tree table and floor lamps. Some of his designs are numbered and dated, most of them small series of tables.

More recently Fernandez designed a chandelier for the French company Antiques MC. It is still for sale.

He not only worked with brass and minerals, but also with resin. He made several items and lamps in fractal resin such as artist Pierre Giraudon. His pyramid table lamps are the most well known.

Isabelle and Richard Faure founded the Maison Honoré workshop in Paris, France together with Richard Deniau. Often said that they made these lamps. Probably a carelessness. In all probability they were all made by Henri Fernandez for Maison Honoré. The company no longer exists.

The stone was given its name by Theophrastus who discovered the stone along the shore line of the river Achates in Sicily, Italy. Theophrastus was a Greek philosopher and naturalist.

A big Henri Fernandez table lamp was sold on French TV in 2019 during the show Affaire Conclue. A program were vendors have one of their objects appraised by different specialists. (in French)