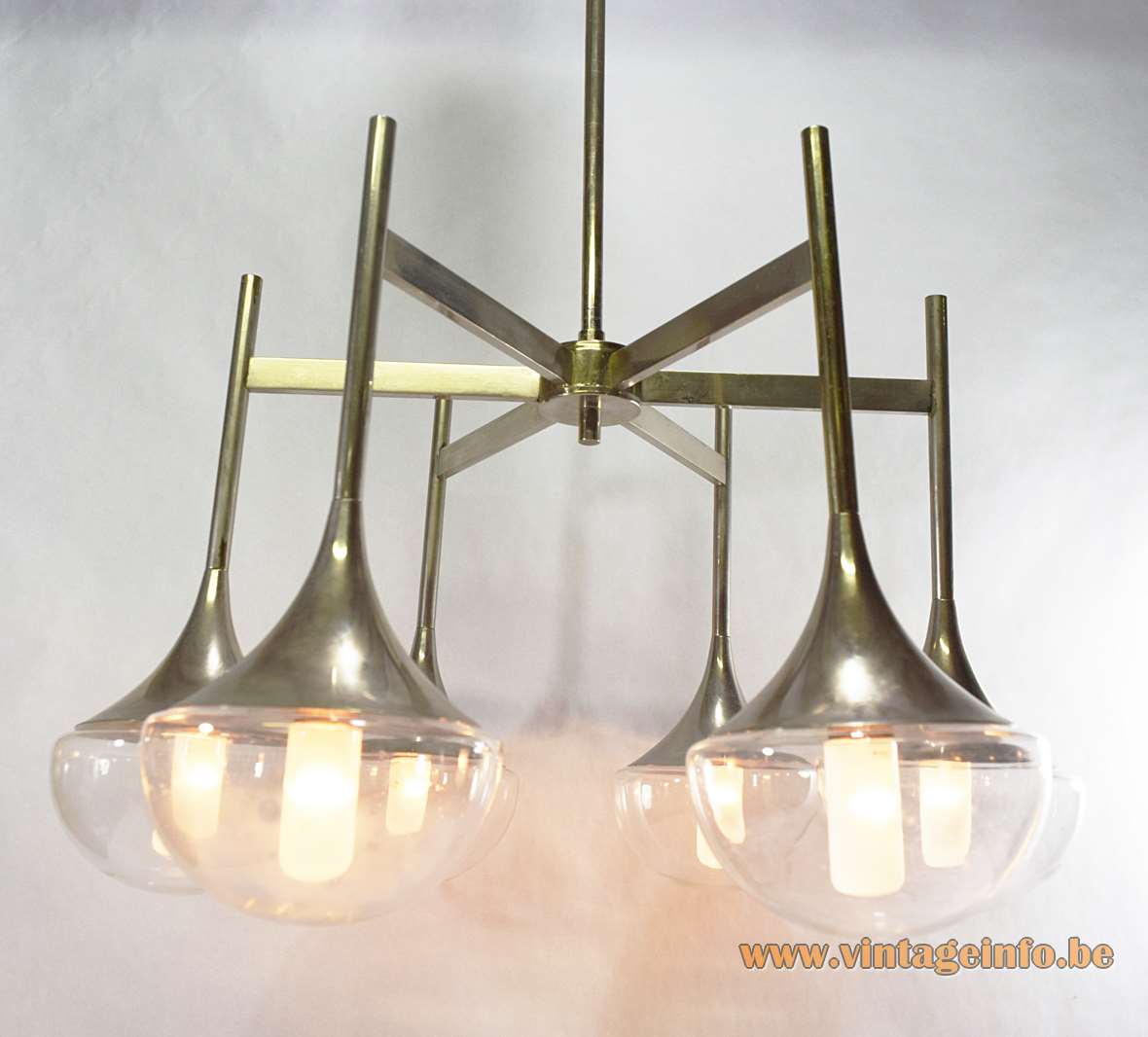 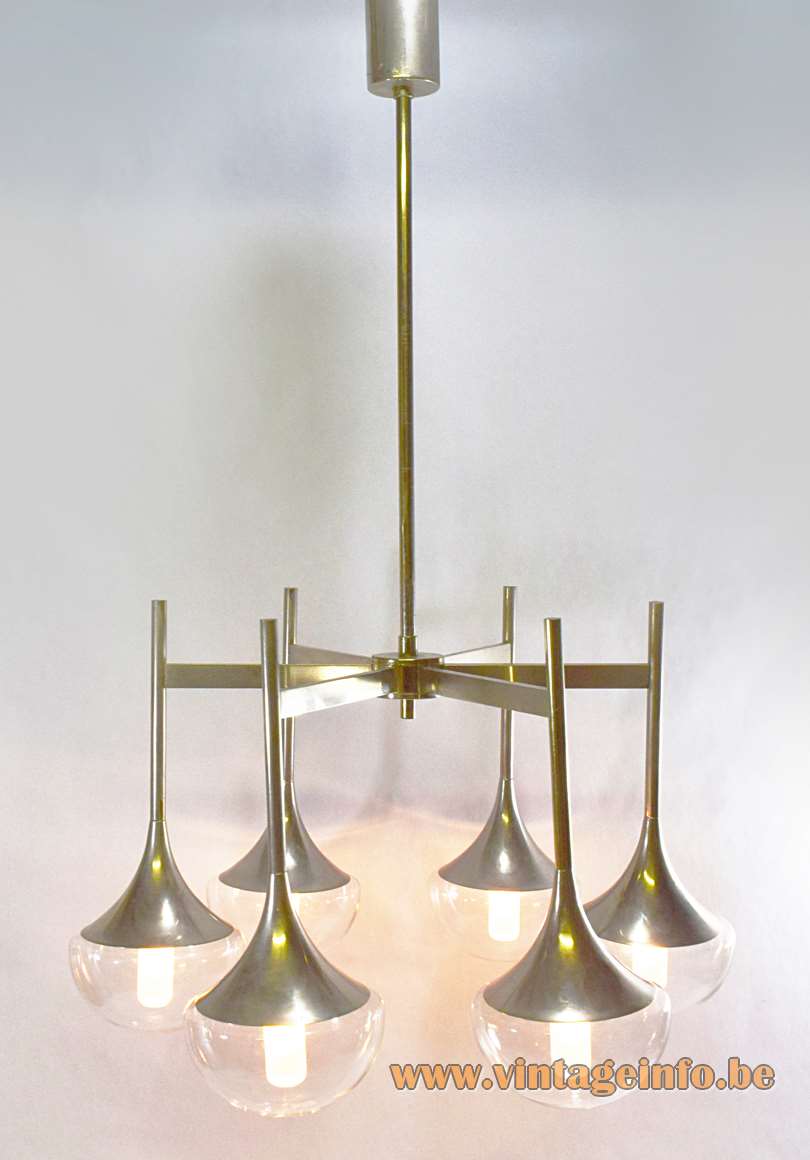 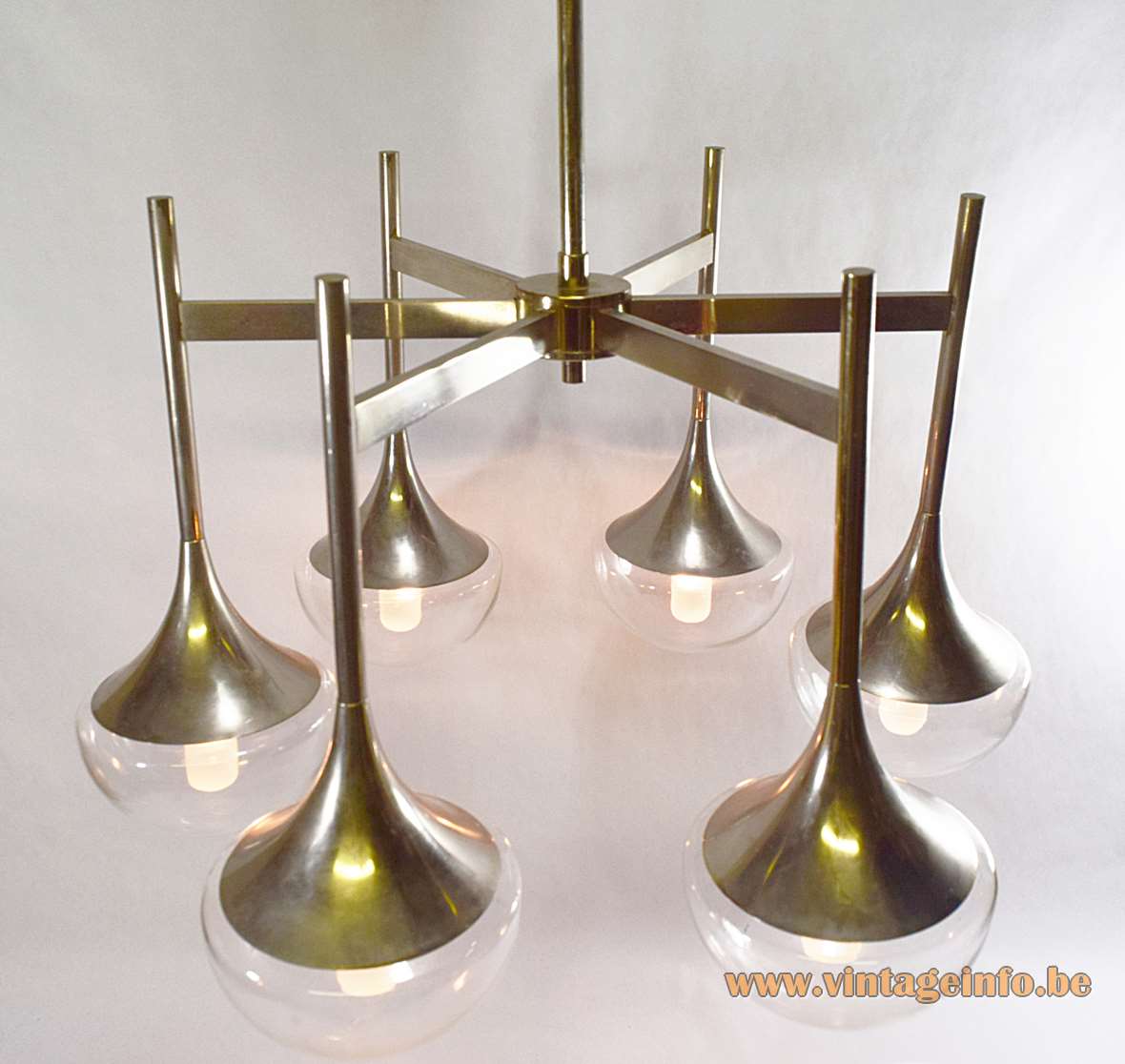 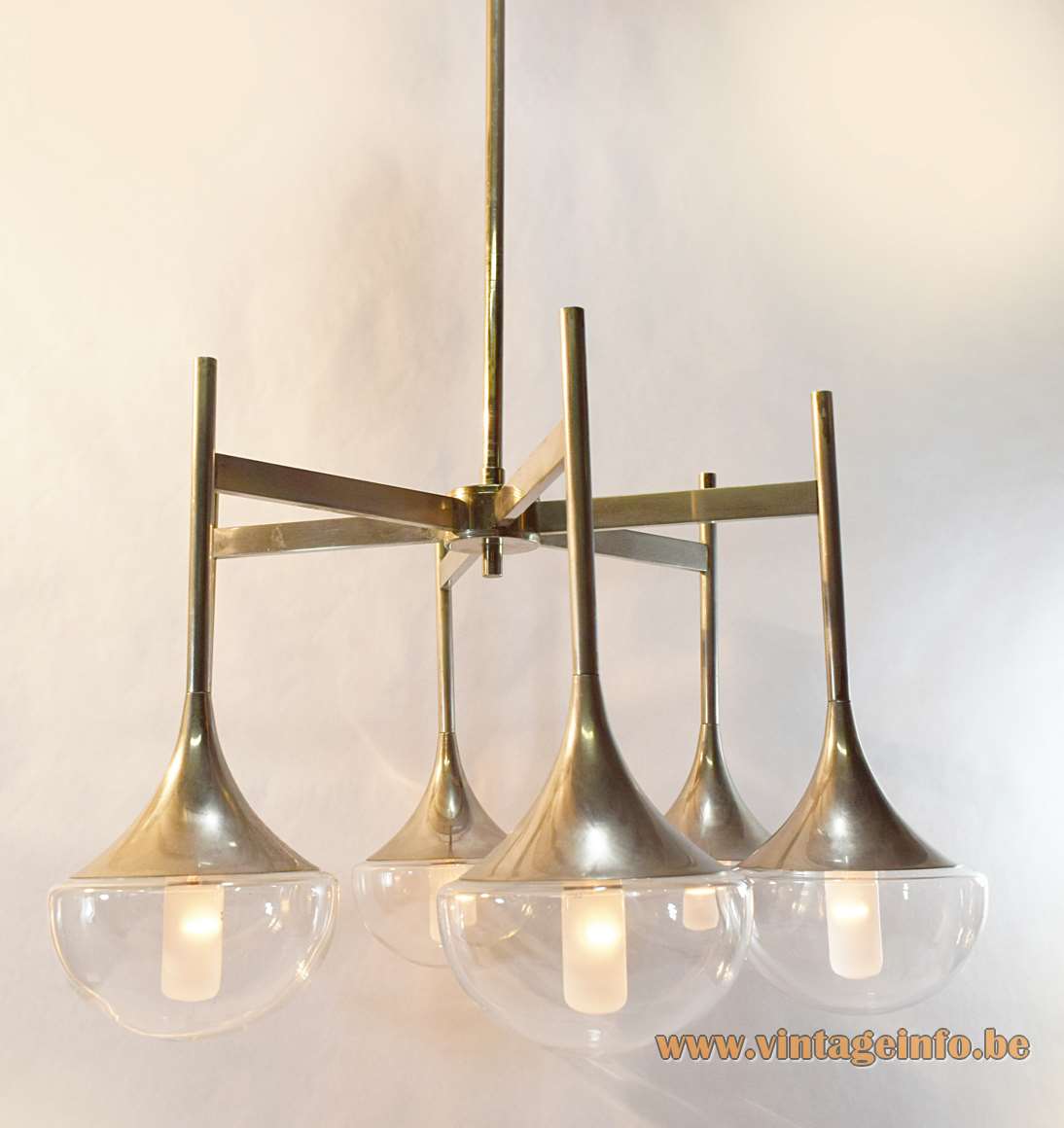 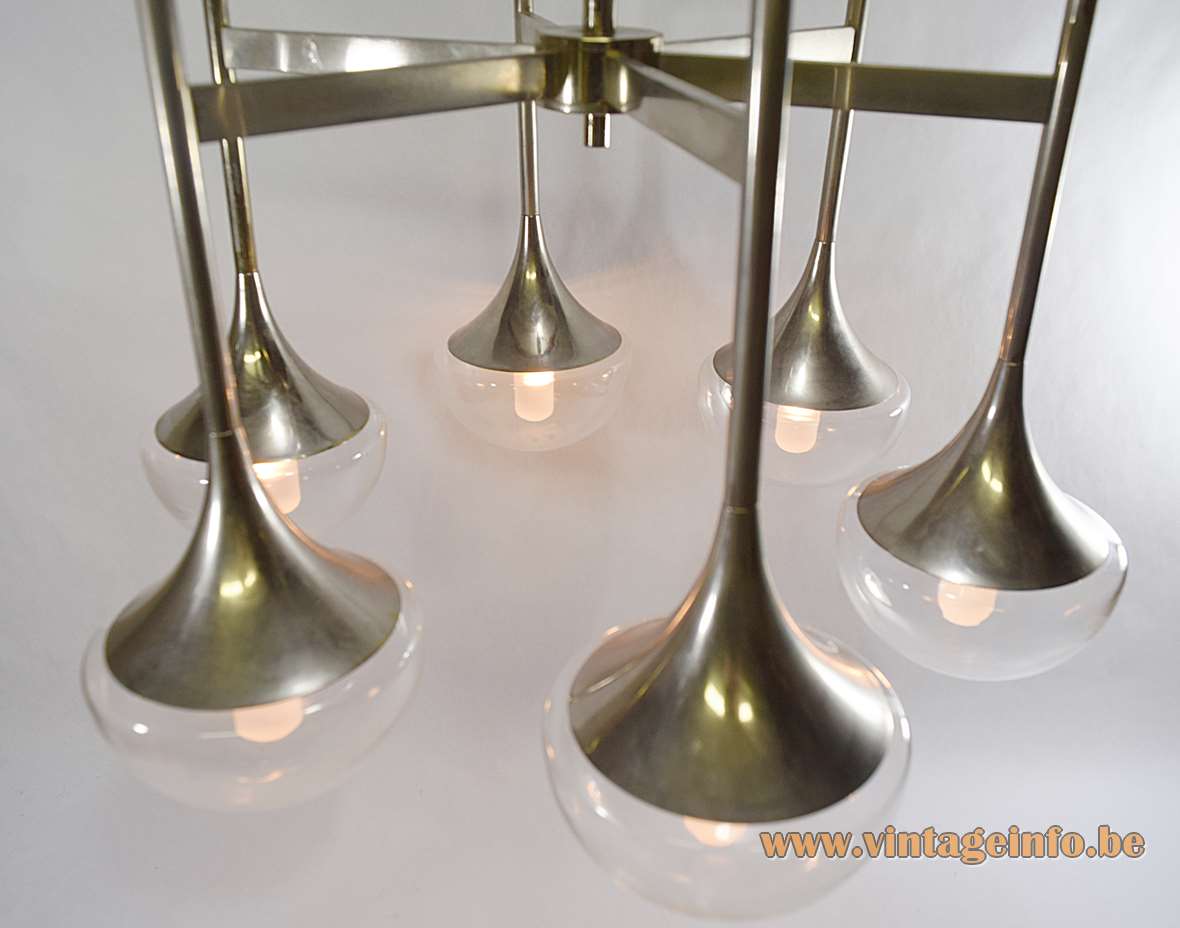 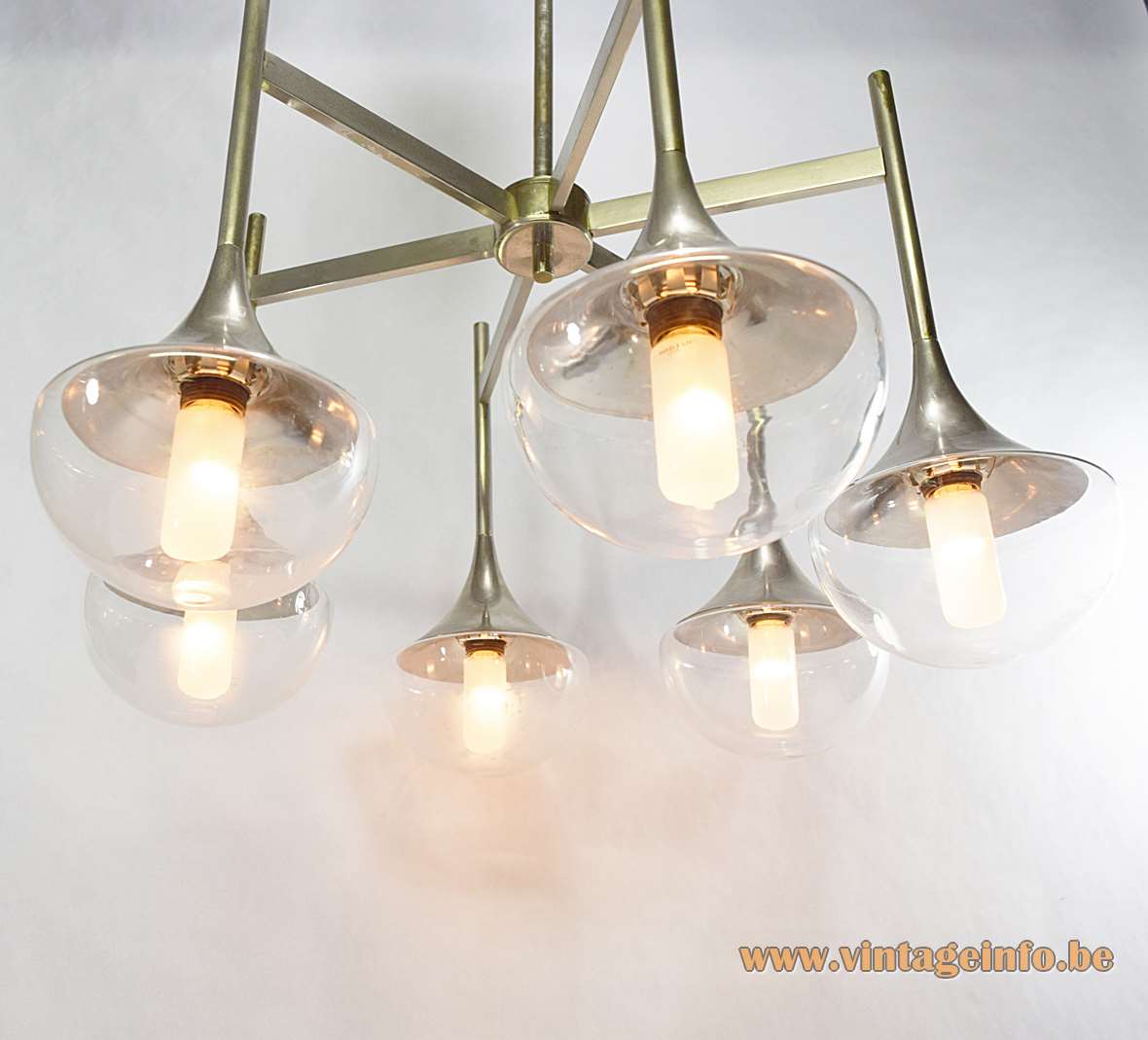 Other versions of this Gaetano Sciolari trumpet chandelier 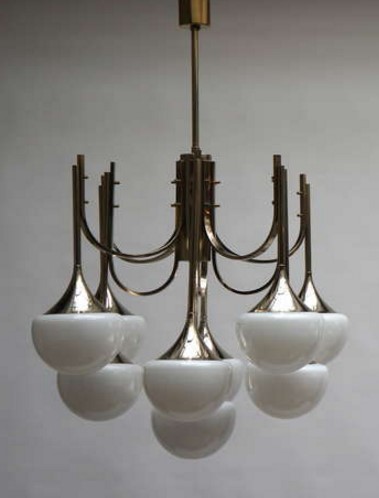 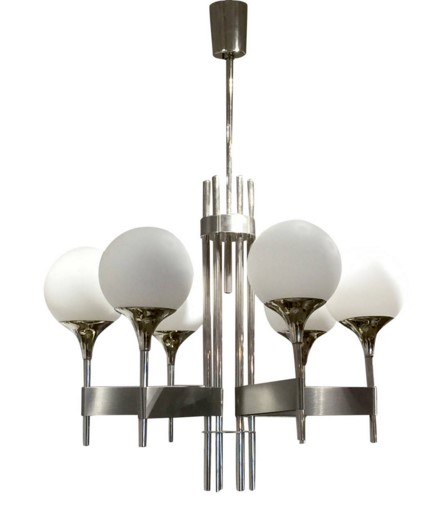 Electricity: 6 bulbs E14, 6 x 40 watt maximum, 110/220 volt.
Any type of light bulb can be used. Not a specific one preferred. For this setup long frosted tubular bulbs were used.

Other versions: This Gaetano Sciolari trumpet chandelier also exists as an up-lighter. A bigger version and wall lamps were also produced. Very rare in this transparent glass. Most of the time they are made in a white opal version. A big version exists. The globes are triple in size and they were made by the Italian Sciolari company for hotels and large buildings. S.A. Boulanger only produced the “standard” chandeliers. Also Amilux from France produced versions of these chandeliers and wall lamps.

Often said that these lamps were produced by Reggiani, but those are false assumptions. Many of them have the S.A. Boulanger or Sciolari label. However, Reggiani produced a floor lamp with a similar single big globe, hence the confusion. Stilnovo produced a floor lamp, a single pendant lamp, table lamp and wall lamp with many similarities. It was named Jazz. It appears in catalogues 35 until 44 from the seventies. Models 2201, 2202 2203 and 2204.

Angelo Sciolari graduated with a degree in architecture but wanted to be a filmmaker. This course came to an abrupt end when in 1949 his father suddenly died. He had to took over the Sciolari company at the age of 22.

Gaetano Sciolari created lights for Stilnovo and Stilkronen (Italy), Lightolier and Progress Lighting (USA), S.A. Boulanger (Belgium), Helestra and Leola (West Germany), Lyfa (Denmark), Amilux, France and some other companies and of course for his own Italian family business; the Sciolari company in Rome and Milan; where all the lighting business at that time was present.