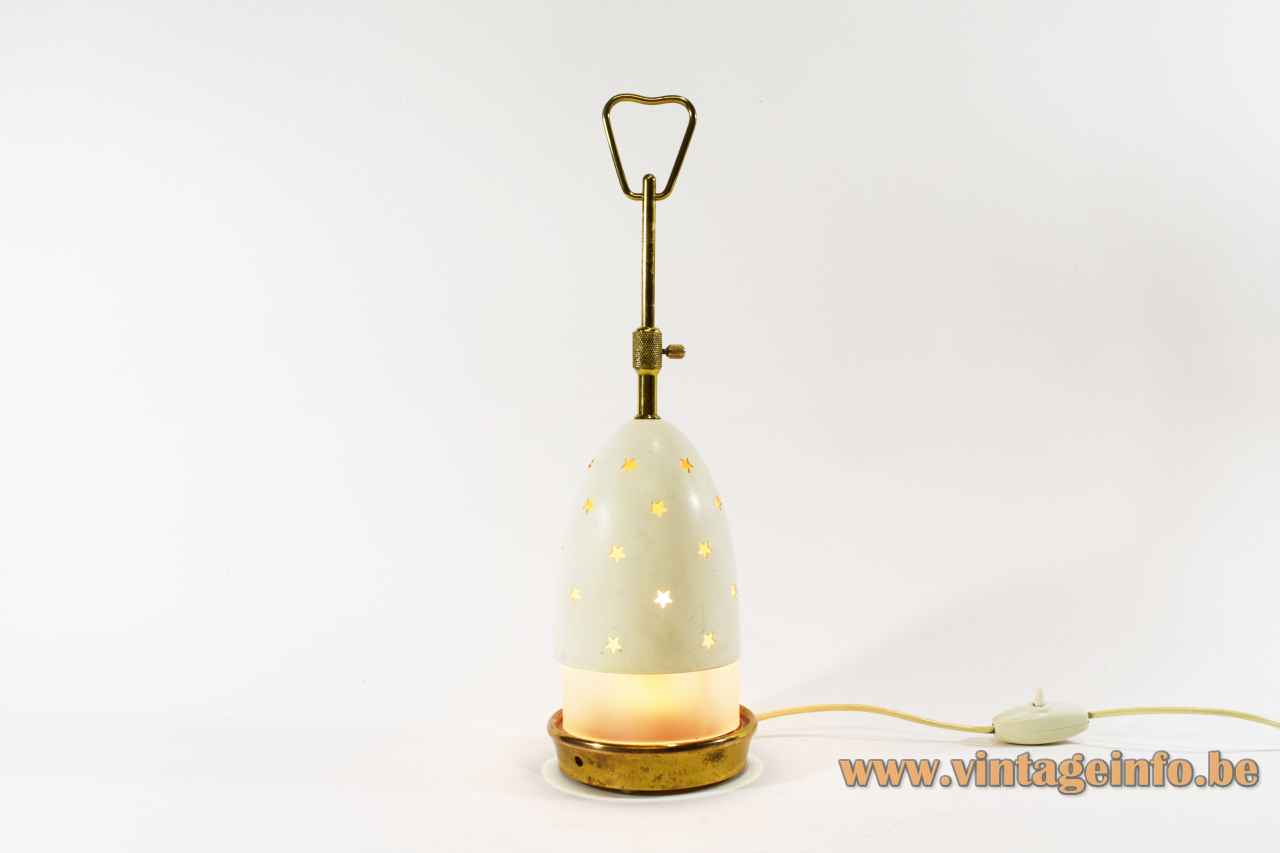 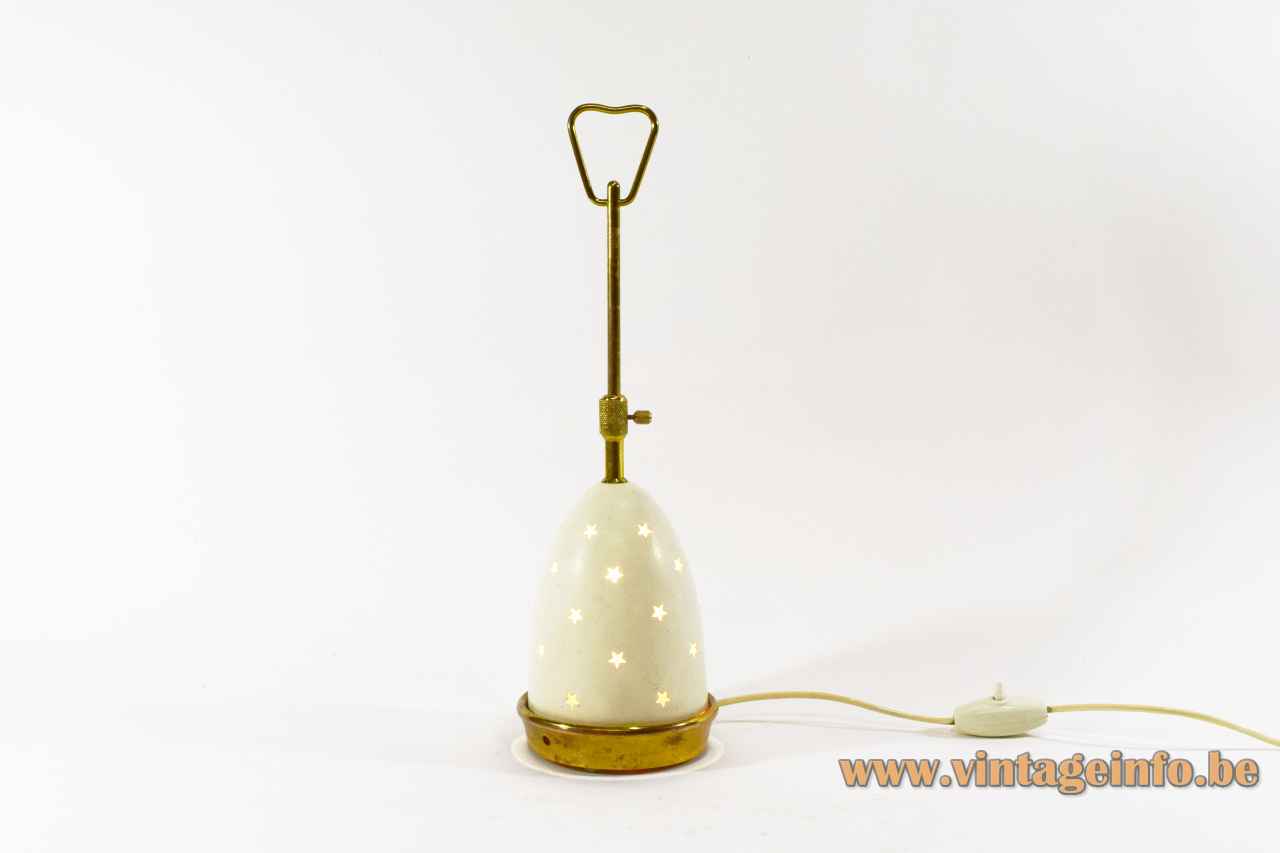 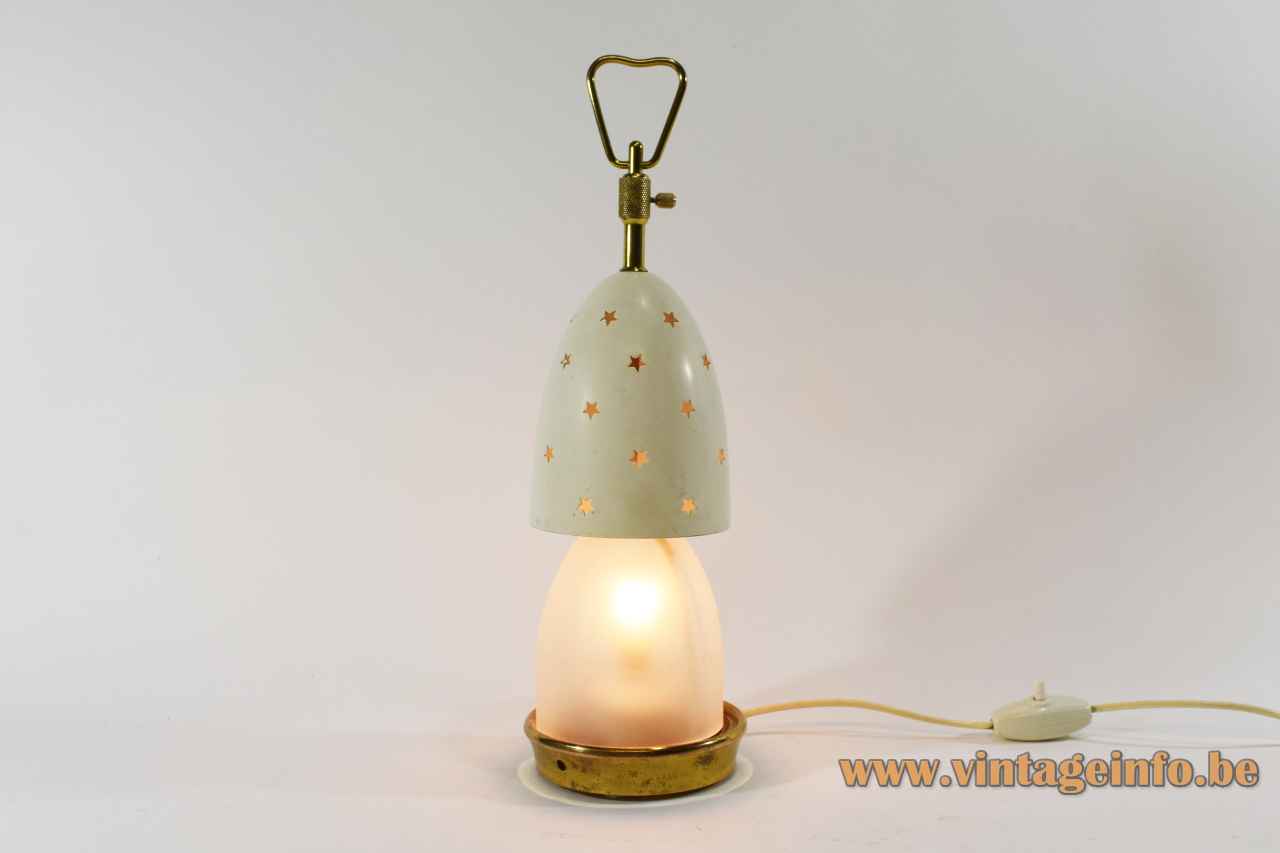 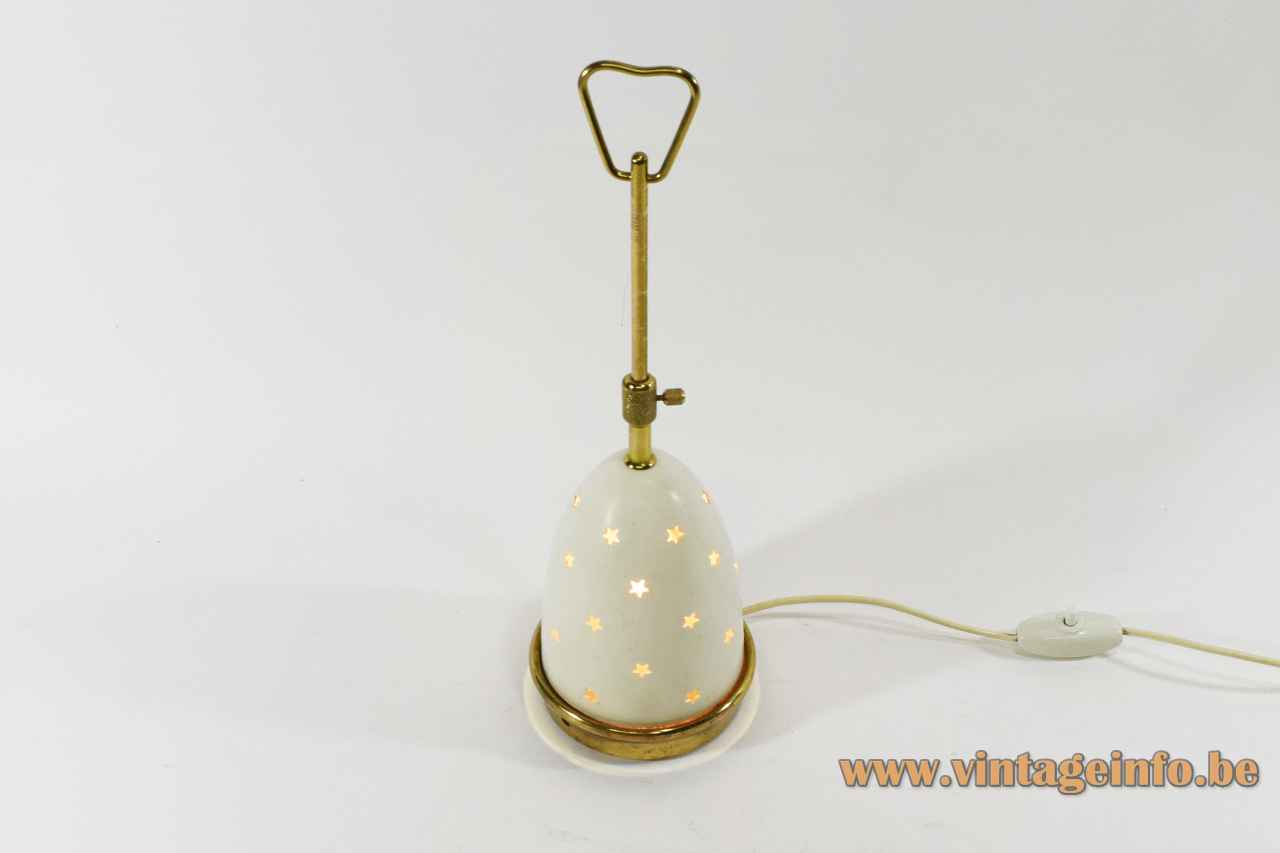 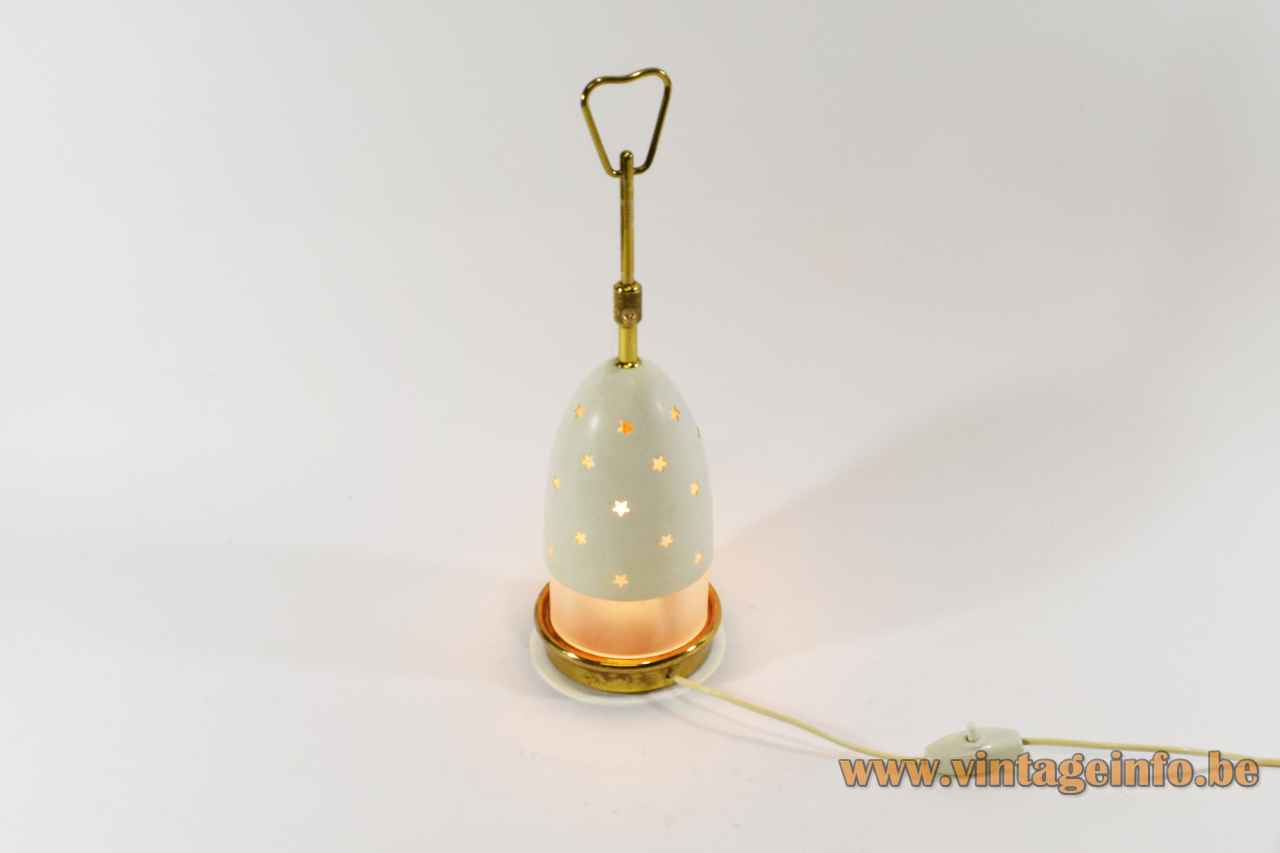 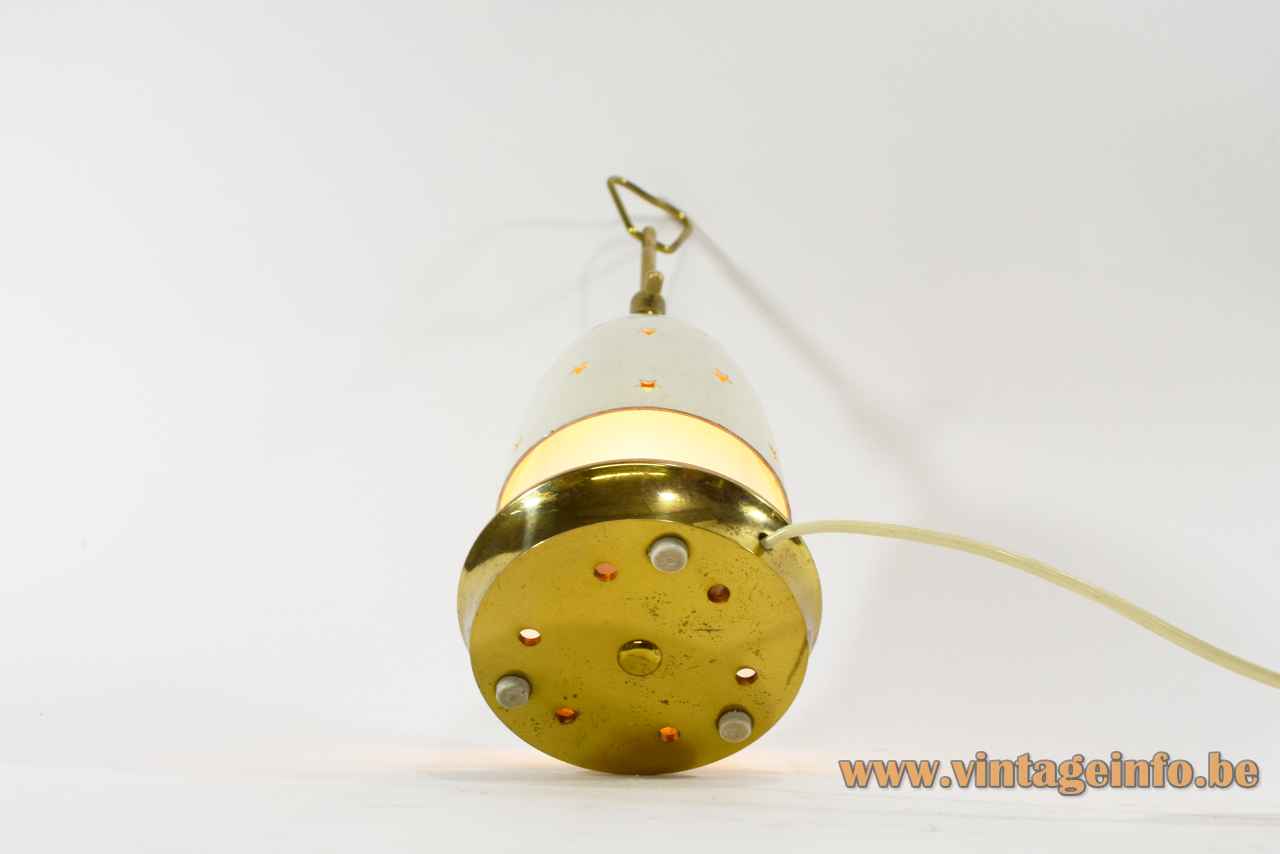 Other versions: The Arredoluce Stellina table lamp exists with small variations and was made in several colours. This one has a knurled screw to adjust the lampshade, most of them have a ball screw. Also the ball screws are made different in size. Some lamps are stamped on the bottom with the Arredoluce name, some not. Others have a label.

Versions were made with the switch on the base, but also with a switch on cord. The more luxurious version had an extra base: a brass disc to put the lamp on.

The Arredoluce Stellina table lamp is described in the book: Arredoluce – Catalogo Ragionato 1943-1987 – Catalogue Raissonné. Written by Anty Pansera, Alessandro Padoan and Alessandro Palmaghini. Published by SilvanaEditoriale. It is located on page 15 and 121.

The Stellina lamp, model 12291, is often named Kennedy, after John Fitzgerald Kennedy. Kennedy’s children received this lamp as a gift from Angelo Lelii, who was a big fan of the USA and the president.

The cut out stars from the lampshade ended up in the pockets of Massimo Lelii, Angelo’s son. He was a little boy at that time.

Angelo Lelii, often named Angelo Lelli, is the founder of Arredoluce; Italy’s most innovative lighting firm of the 1950s and 1960s. He stands out with his innovative research into form, matter and colour. The company was active from 1943 until 1987.

Angelo Lelii was born in 1911 in Monza, near Milan in Italy. He was responsible for the design and manufacture of hundreds of beautiful lamps. In 1943 Lelii created his first lamp in his basement at home. In 1946 he had a complete page in the famous Domus-magazine and in 1947 Angelo Lelii started his company Arredoluce in his hometown. It ended business in 1987.

You can find an Italian lamp company on the internet with the same name, but they just use this name. The firm got nothing to do with the original.