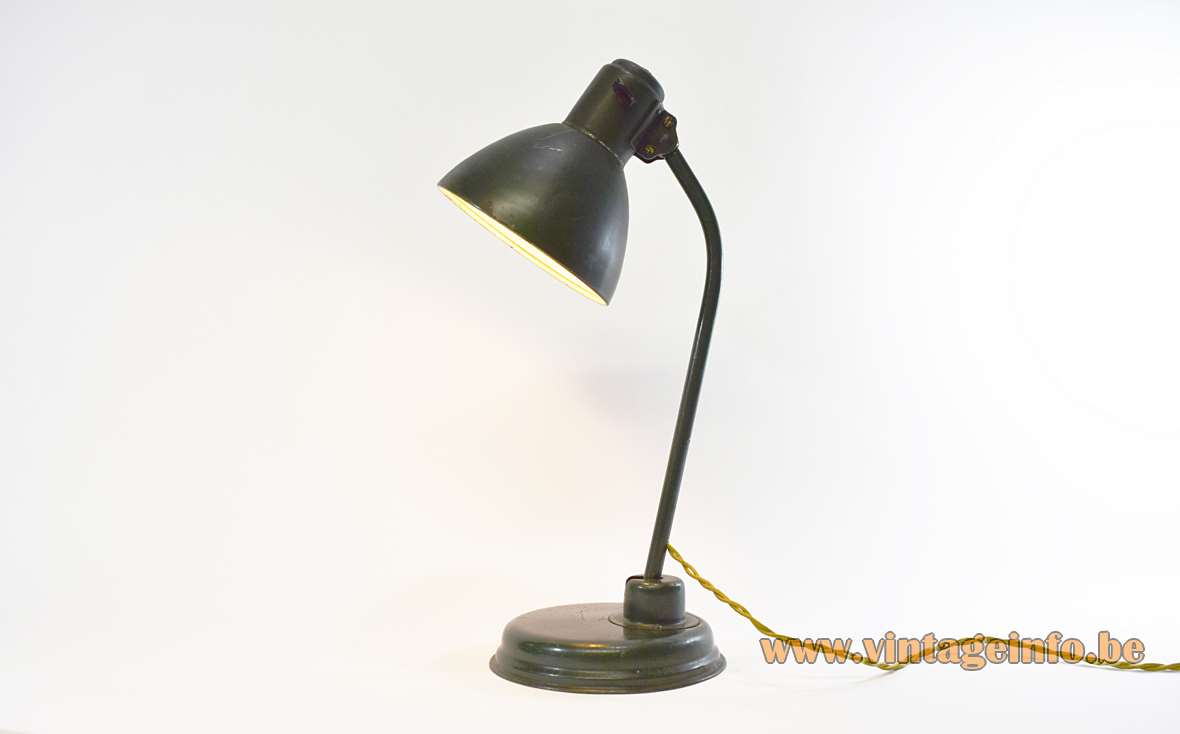 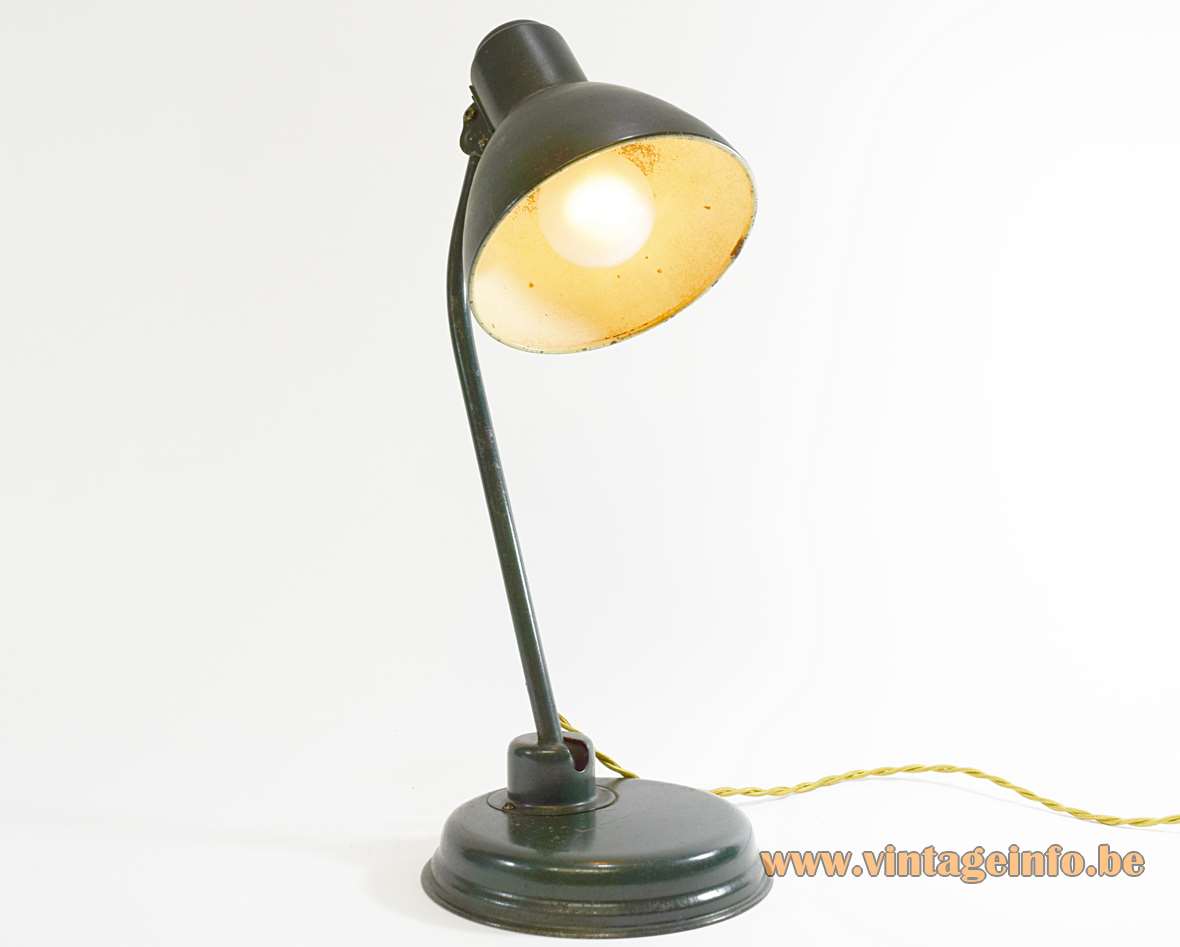 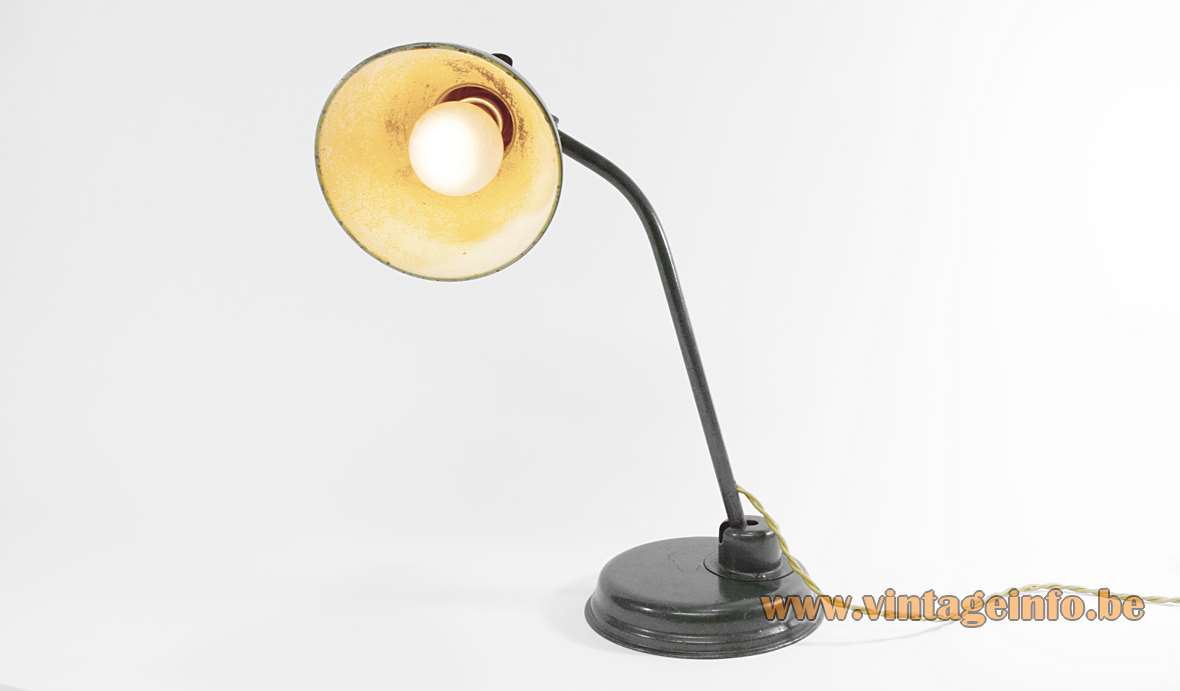 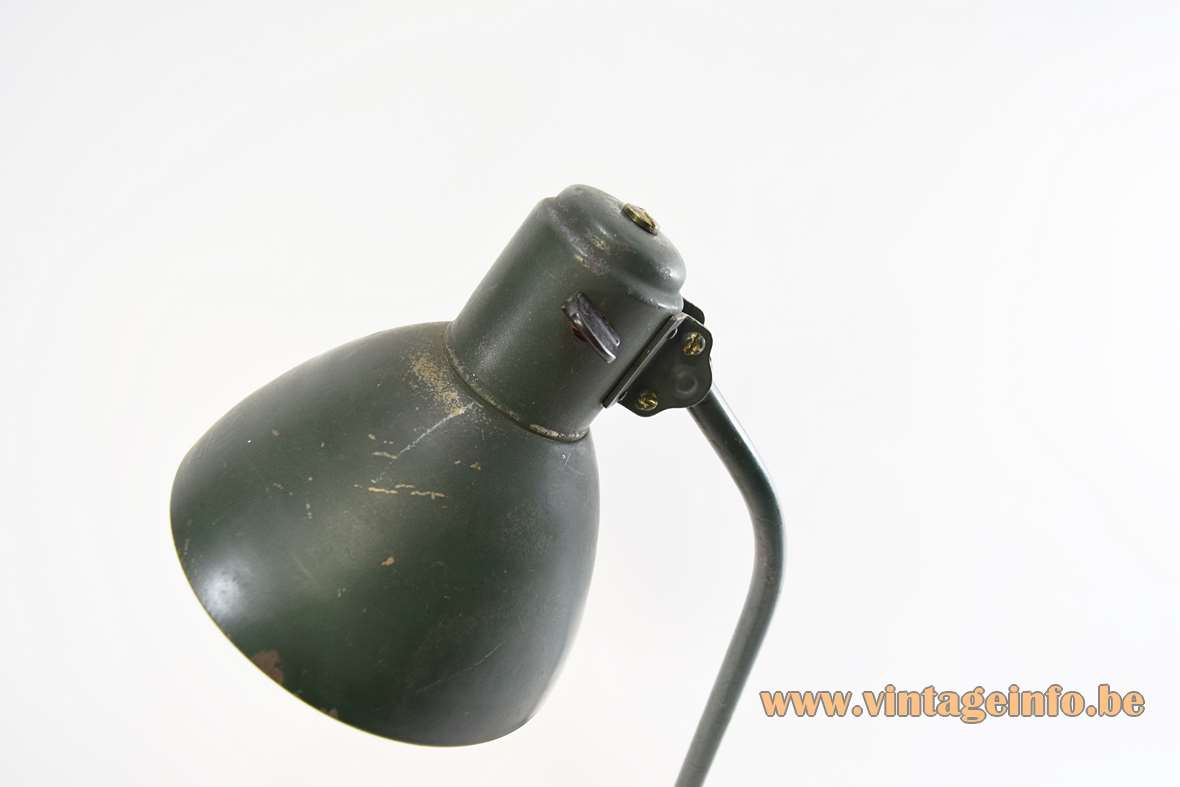 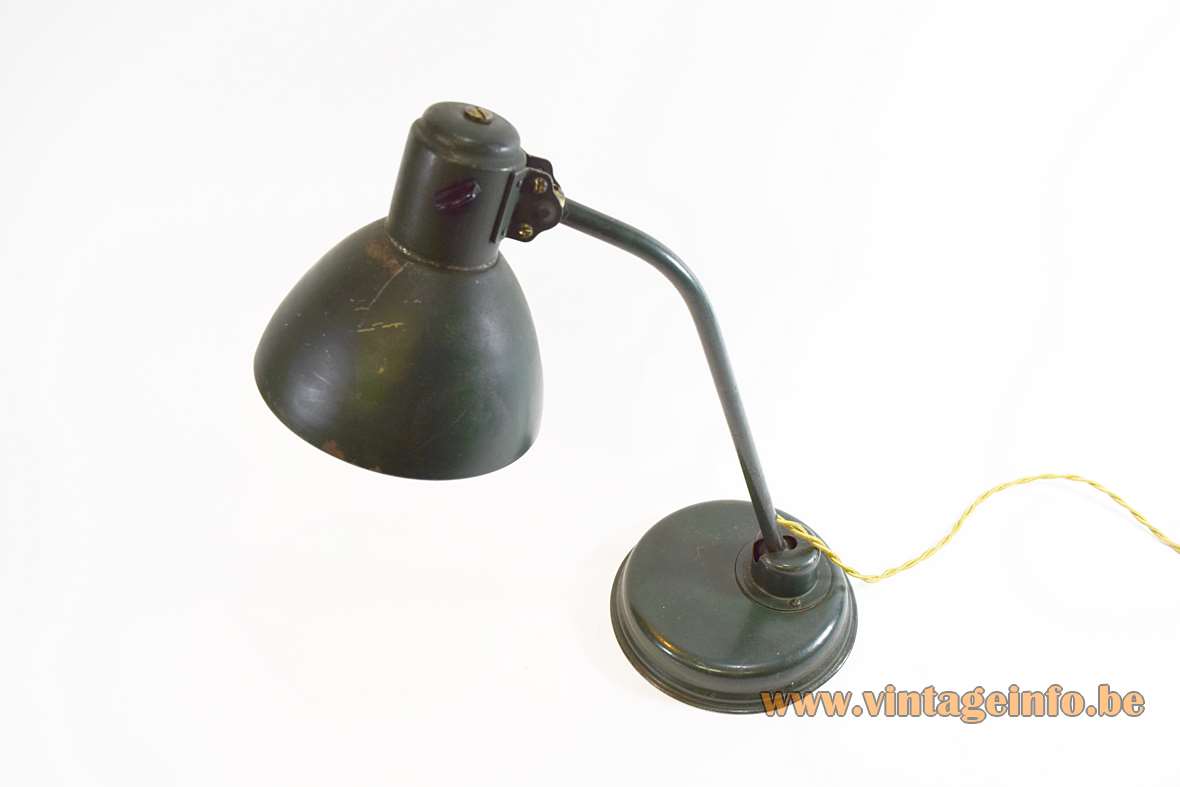 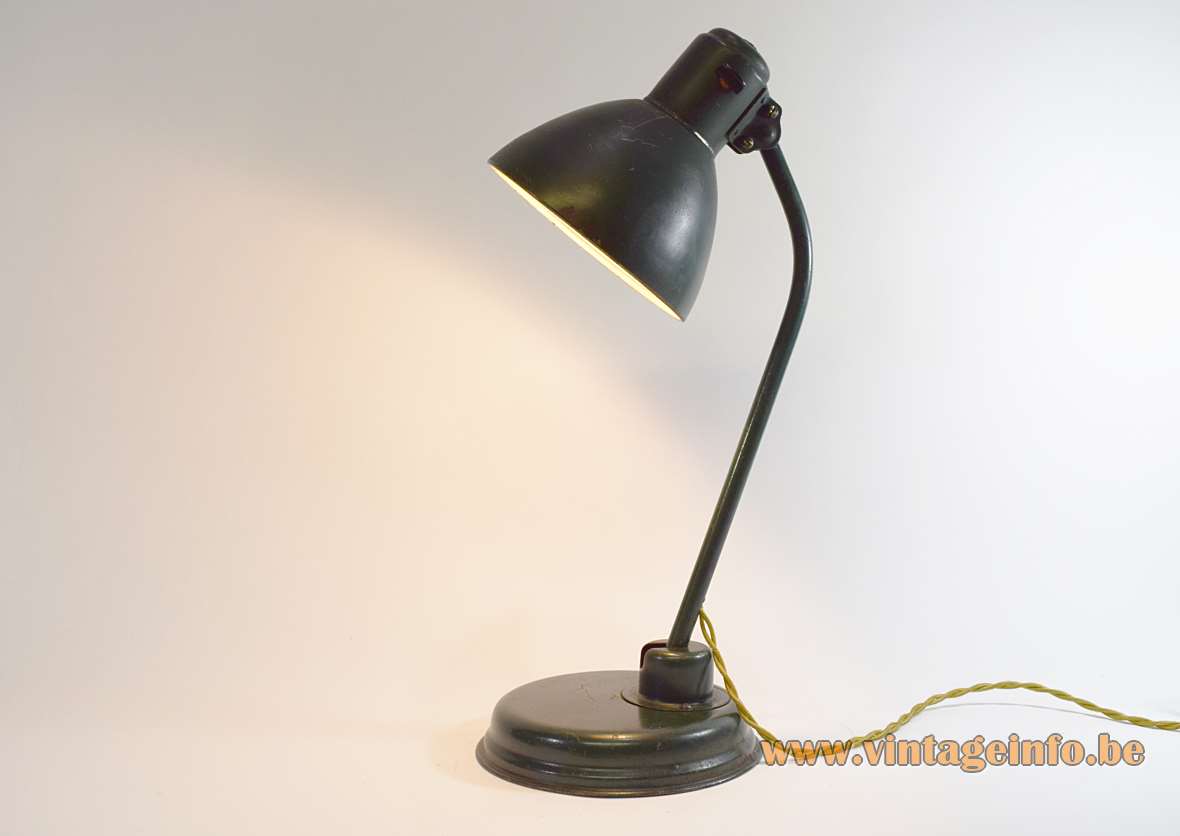 Designer: Based on the table lamps designs by Christian Dell.


Manufacturer: Probably a French or Belgian company, to be appraised.

Christian Dell designed many “Idell” lamps such as this one for Kaiser Leuchten and Koranda. The term “Idell” is a reference to the word idea and his surname, Dell.

Sometimes this lamp is sold as model 6556, designed by Christian Dell, but that’s a different lamp with a rounded base and other parts.

It is possible that this desk lamp was produced in a later period, after World War II. Similar lamps are still in production.

Do you have an idea about this desk lamp? Please let us know through the contact form and help improve the websites exactitude. Your help is much appreciated.

In 1913 Christian Dell worked as a silversmith in Dresden before going to the “Großherzoglich-Sächsische Kunstgewerbeschule Weimar“, the Saxon college of arts and crafts in Weimar, where he met the Belgian artist and architect Henry van de Velde. Together with Victor Horta and Paul Hankar he could be considered as one of the main founders and representatives of Art Nouveau in Belgium.

Dell returned to Hanau and from 1922 until 1925 he worked as a foreman of the metal workshop at the “Bauhaus” in Weimar where he collaborated closely with Hungarian constructivist László Moholy-Nagy and produced numerous designs for office and workplace metal light fittings.

In 1926 he changed to the Frankfurt art school (Frankfurter Kunstschule). He designed a great deal of lighting, including the brass and nickel “Rondella-Polo” (1928-29) table lamp range (his real creative breakthrough) and the “Idell” range, which was mass produced mainly by Gebr. Kaiser & Co. Leuchten KG and later also by Bünte Und Remmler (BUR).

Gebr. Kaiser & Co. Leuchten KG, Lichttechnische Spezialfabrik, Neheim-Hüsten was founded by Hermann Kaiser (born 1863), who came to Neheim as a worker from Heddinghausen. With a brother and a participant, he became self-employed in 1895.

After the war, the manufacture of electric lighting fixtures was expanded, and finally the whole branch of the business was transferred. During the period between the two world wars, the company developed into one of the largest lighting manufacturers in the region. not in the least thanks to the lights designed by Christian Dell.

As early as 1934 the number of workers was 350. This figure increased to about 600 to 700 employees until the beginning of World War II.

During that war the production plants were completely destroyed. After the war a strong enterprise expansion began. Between 750 and 1000 people were temporarily employed.

Towards the end of the seventies the company was acquired by Thorn Lighting Group. This became the property of an international investment company in 1993, and the remnants of production were transferred to Dortmund in 2000.